Well, this is no good.  I previously wrote up the report for Sunday, and it disappeared!  So, off the top of my head…

We went into the park in the afternoon on Easter Sunday, and it was the most crowded Yellowstone has been since we arrived.  Trailhead parking lots that had been empty over the last ten days were packed, from Trout Lake to the bottom of the Tower Road to Wraith Falls.  Folks were taking advantage of the holiday and the nice weather (it was twenty degrees warmer than Saturday) to hit the trails.

I barely took any pictures this day.  We drove all the way west, and since I wanted to get out for our own short little hike, we headed to Mammoth.  The one stop was for elk wandering across the lower slopes of the hot spring runoff. 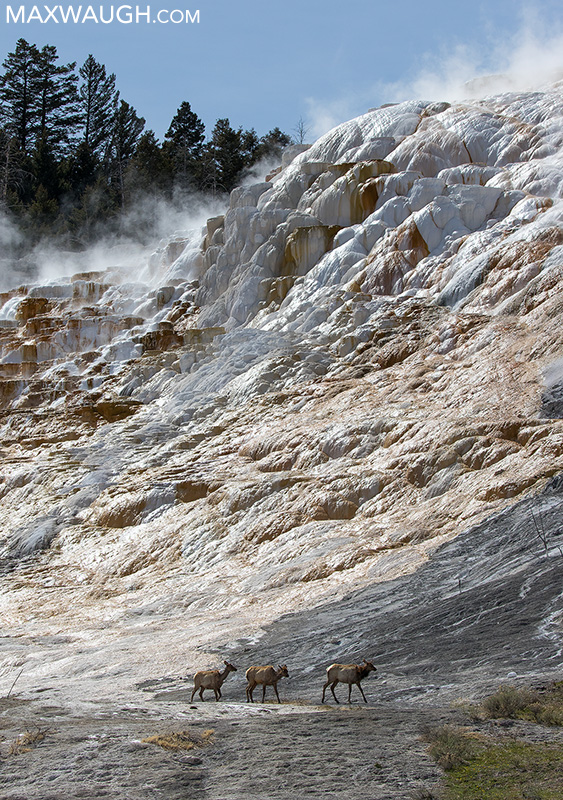 After a couple photos, we ascended to the Upper Terrace Drive.  I thought it would be a good option for a walk, since it had been closed a few days prior.

Things were anything but quiet up there though.  The parking lot was packed with cars, all waiting for an organized biking group to arrive at the end of their long ride from West Yellowstone.  And the drive was actually open, so any remote hopes of possibly seeing an Easter bunny (it’s a great spot for jackrabbits) were dashed by the occasional car and/or bicyclist riding by.

Still, it was a nice walk.  I called out occasionally to warn “Mr. Bear” that we were walking up the road.  Eventually, I started calling to Mr. Marten, and then Mr. Boreal Owl, obviously not in warning, but as an invitation.  At this point, Jenn snorted derisively and called for “Mr. Unicorn.”  Okay, she had a point.  I was unlikely to see anything exciting.  We did see a chipmunk.  Alas, no photos.

After an ice cream stop at Mammoth, followed by a diaper change, we headed home.

We picked a good day to go to Bozeman.  The weather was pretty horrid early on Monday.  Aside from a brief dry spell in the Lamar Valley, we experienced nearly every possibly combination of moisture, cold and wind.  The mess followed us all the way to Bozeman, where we had to run errands.

We made it back south late in the afternoon, at which point things had cleared up dramatically.  We stopped in Gardiner, checking off a couple more items on the To Do list.  This included a stop at George Bumann’s sculpture studio, where we had a chance to see some of his developing sculptures and learn more about his work.  I was also there to pick up my first real fine art purchase, a small bronze of the Canyon alpha female.  A beautiful representation of a beautiful animal (I’ll write much more about her next week in the blog!). 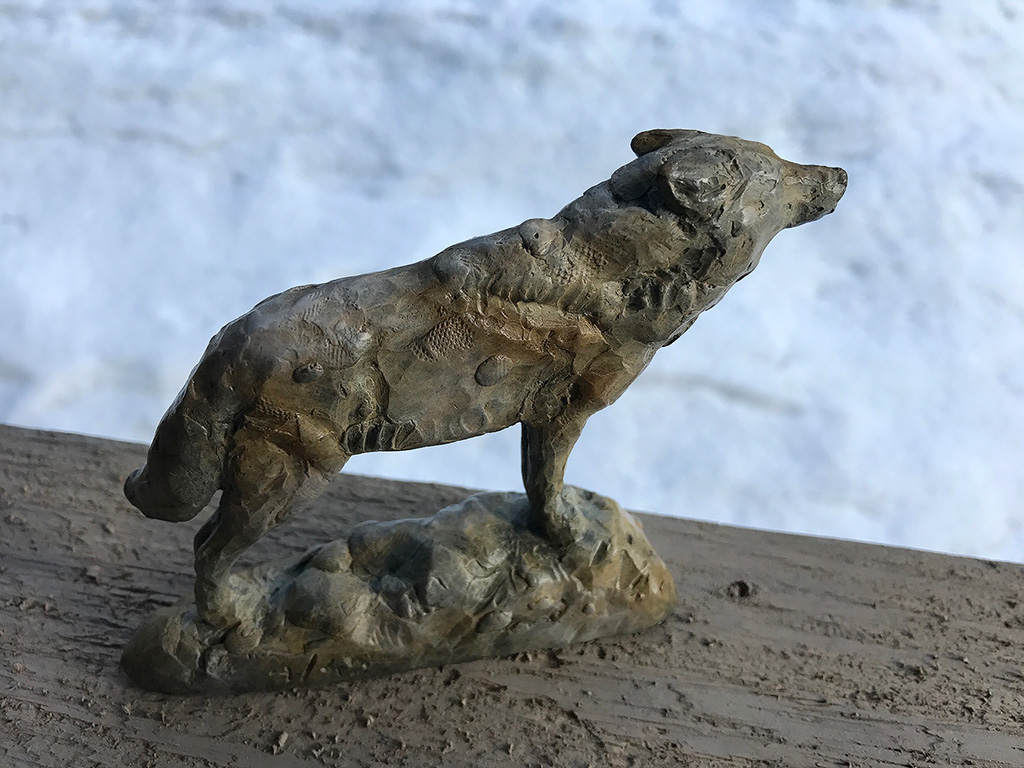 “The White Lady,” by George Bumann

We practically had the park to ourselves driving back through.  It seemed the morning nastiness had scared everyone off.  Wolf watchers hadn’t moved from their morning spot in the western Lamar (scopes pointed at the high northern hills), but otherwise, we barely saw anyone.  It’s too bad there wasn’t much wildlife to photograph.  The late afternoon light was gorgeous!

Once again, I made it in for an afternoon excursion.  Initially, it looked like a mistake leaving the warm (dry) confines of the cabin.  It was wet and rainy in the northeast, so I wasn’t sure how long I’d stay out.  But pretty soon I encountered one species after another.  It ended up being the busiest couple hours I’ve had in the park on this trip.  Granted, it was all small stuff… but I happen to like small stuff.

It started at Hitching Post, where I paused to photograph ground squirrels.  Hey, a colorful perch and some alarm calling makes for a more interesting photo, even if it is a varmint. 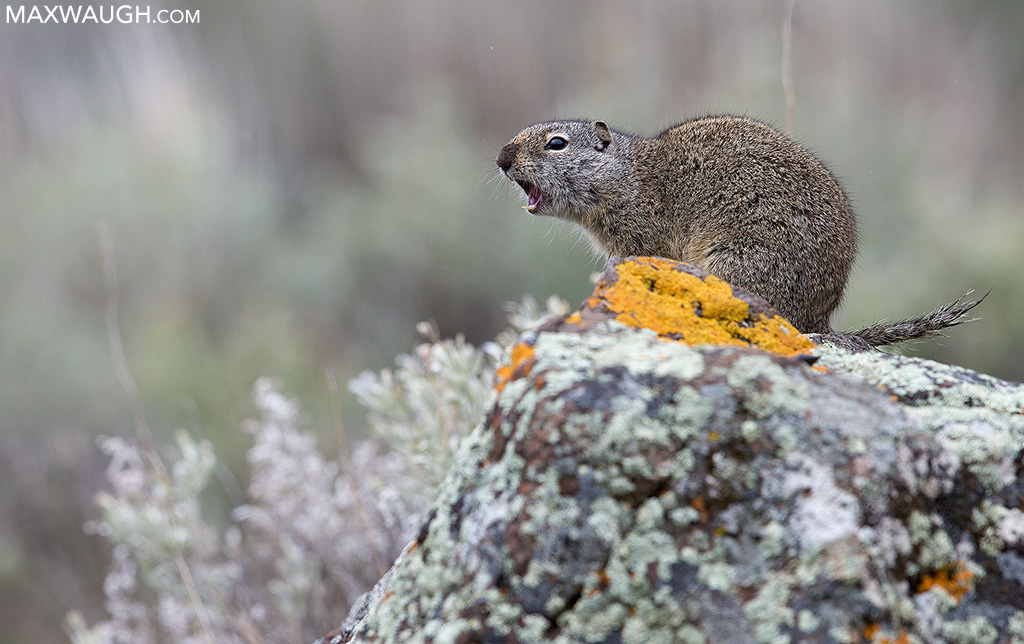 As I drove out of the lot and down the road, I spied an American kestrel perched on one of the snow stakes lining the road.  This shy species took off as the car approached.  There really wasn’t a chance for photos, but I’d have better kestrel luck later.

Around the curve across from the Confluence, bighorn rams had made their way downhill and were grazing above one of the pullouts.  Typically the rams only come down this far at this spot in winter, so it was nice to see them briefly in spring.  Further west, four coyotes were hanging out together on the north side of the road.  It sounded like some wolf activity had just taken place as well, with at least one gray crossing and some long howling sessions.

I entered Lamar Canyon, and had another excuse to stop.  The resident ospreys that suffer from “falling nest syndrome” were perched together above the road.  I snapped a couple quick photos before one flew back to the nest.  Then I waited another 20 minutes or so before the next one took off.  It circled over the river canyon, and swooped over to the canyon walls to snatch moss off the boulders.  Without pause, it swooped back and brought the moss back to the nest.  Spring home improvement! 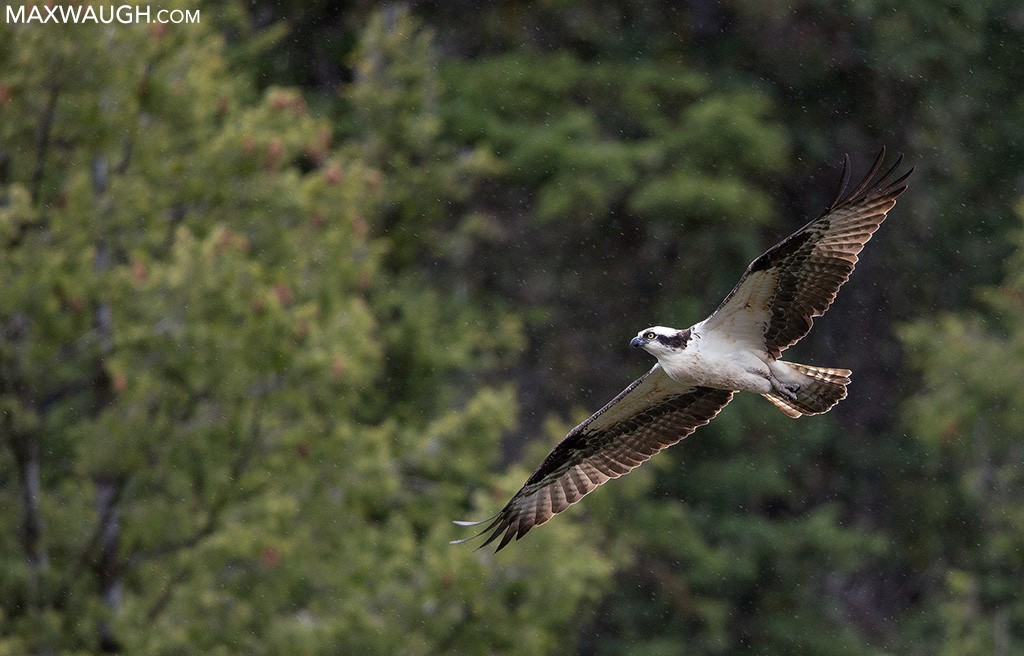 I stuck around for another takeoff or two before packing up and heading out again.  As I pulled onto the road, a Peregrine falcon zoomed in front of my car, disappeared into some of the low trees and emerged back out along the north slope, skimming the ground.  No chance for photos, but cool to see.

I had more good luck with raptors at the aspens past Slough Creek.  I spied one of the kestrels that hang out there, and, shockingly, it actually stuck around and allowed me to take photos while on foot.  There’s always a lot of bird action in those trees, and on this afternoon Northern flickers were having some fun.  A trio were chasing each other from tree to tree, and appeared to be participating in some courtship rituals.  Unlike many bird species, the female flicker does participate in dancing and tail fanning. 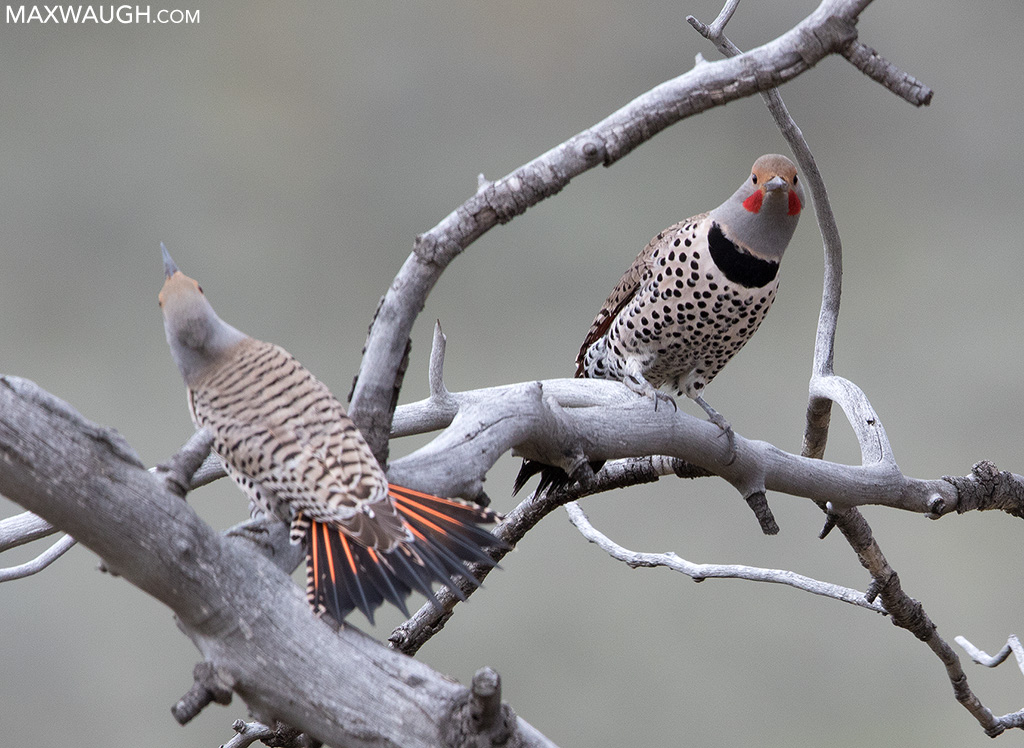 This made up the bulk of my photography, but there was still more to see down the road.  I just missed a fox and a black bear near Wrecker on the way through the first time.  On the way back, I was shown a different fox, though it was pretty far off.  At one point, the fox approached a couple of mule deer, which promptly chased it off.

I watched the fox through binoculars for a while longer in case it decided to come back toward the road.  It kept heading further away, however.  Pulling out, I had to dodge some bighorn ewes and yearling lambs grazing along the road.  Across from the Specimen trailhead, a couple of sandhill cranes patrolled a meadow.

For a dull gray afternoon that wasn’t looking promising, it turned out to be pretty active after all!