Yellowstone Bison Jam: How to Deal With Buffalo on the Road

A few years ago I posted about this topic on Facebook, as I feel it’s an important piece of advice for those visiting Yellowstone National Park for the first time.  With the spring and summer park tourist season around the corner, I’ve written a bit more for the blog.

It’s inevitable. At some point you’ll encounter a bison on the road in Yellowstone. Sometimes it’s a single big bull lumbering along the edge of the pavement, or sometimes straight down the center line. Other times you get a few bulls together playing Follow the Leader.  I once even had a small group doing the Hokey Pokey in front of me. 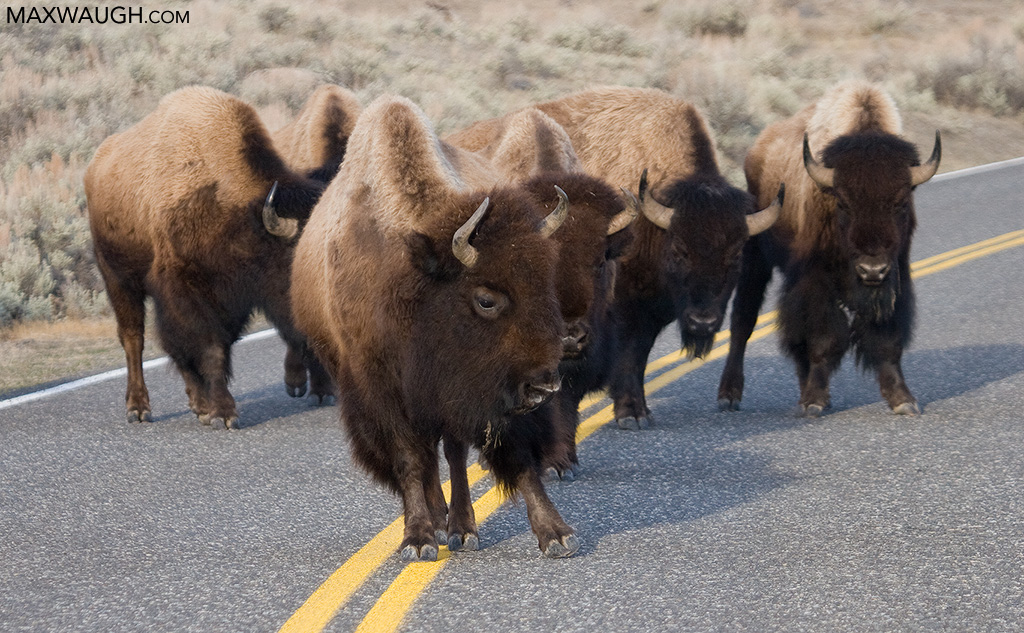 And then there’s the larger herd: an endless string of cows and calves, either following the road, coming at you or crossing in front of you.  Though they’re generally using the roads to commute, sometimes these large, magnificent animals just stand there, blocking traffic while giving you a haughty look.  If this happens to you, congratulations!  You’re about to endure one of the tourist experiences that makes Yellowstone so unique: the Bison Jam.

Vehicular traffic can get backed up, sometimes for miles, as bison refuse to move or, more often, drivers refuse to pass them. All it takes is one driver who’s too nervous to bring their car close to a lumbering beast—they don’t want to scare the animal or more often, they’re worried the bison will ram their vehicle—which means you may not be going anywhere for a while.  I was once stuck in a jam for three hours.  In order to avoid a repeat of that unforgettably tedious afternoon, I hope to offer some useful tips and peace of mind for novice Yellowstone visitors who are about to encounter their first bison on the road.

Not Everyone In Line Is On A Free-Wheeling Vacation

One reason we’re discussing passing bison is because it’s important to remember that many folks on the park roadways can’t kick back for hours and “soak in nature” at 5 miles per hour.  Some people are commuting through the park to or from work or home.  Others may have an emergency.  Once, while leading a tour, I got caught in a jam with a client who was feeling unwell and had to be returned to town in a timely manner.  The driver of the yellow tour bus in front of us decided, instead of using the large pullout directly to his right to get off the road and allow his passengers to snap photos, that he would just idle in the middle of the road as members of a herd stood there staring back at him.

Another bison jam I endured many years ago actually forced an emergency hotel room rental one evening, after delaying us to the point where we couldn’t refuel the car (back when gas stations didn’t have 24 hour automated pumps) and couldn’t return to our camp site.  These days one can pump gas 24 hours a day, but sometimes park roads close at certain times due to construction or weather conditions, so getting stranded remains a possibility and urgency may be required. 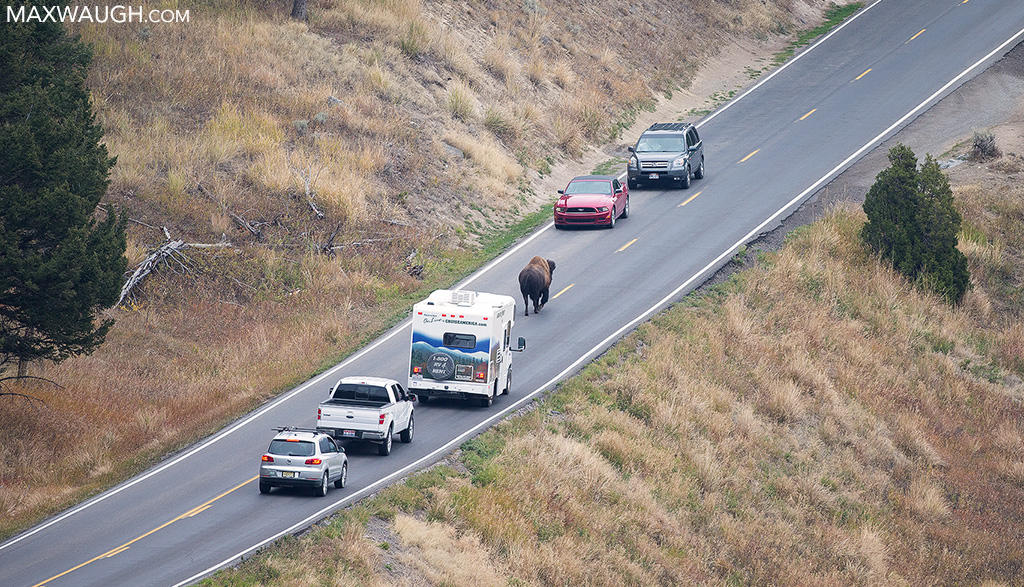 My “Tiananmen Square” photo… a single bison stopping lines of cars on his own.

If you want to enjoy the clip-clop of hooves on asphalt for a couple hours, by all means, use the next pullout, where you can get your car out of the way and let others get on with their more urgent business while you watch the herd lumber onward.

There are other ways to lessen congestion and reduce the traffic snarl. Here are a few things to remember if you’re ever caught in a bison jam.

Before we continue, it’s important for me to state that I believe you should first try to cede the right of way to wildlife, whenever possible.  But many of the techniques described below become necessary when these giant furry roadblocks simply won’t keep moving or won’t get out of your way.  Remember to give them a chance to move first… but if no progress is being made, it’s time to take matters into your own hands.

Also, don’t completely forget the rules of the road when you’re working your way past bison.  Yes, you may have to drive around them using the other lane to pass, but this doesn’t mean you need to pass them on blind curve!  Always be aware of oncoming traffic and other hazards when passing.

Bison are Smarter Than You Think

Bison are actually fairly wise when it comes to the rules of the road. Many visitors fear reprisal if they let their car get too close to the furry roadblock, but buffs are pretty adept at making way for what they probably think is just a big metal beast that wants to get through.

Even if this big guy decided to stay put, at least he left room for cars to pass.

Just as a grizzly bear typically gives way to a larger bison, a bison will give way to your (usually) larger motor vehicle.  You’ll often see them sticking to one side or even the shoulder of the road, offering you room to pass.  Take advantage of this open space and don’t be afraid.

They Will Make Way

Okay, so they’re not always “sticking to their lane.”  Sometimes you do get a bull that walks straight down the middle of the road.  Or you may have a large herd spread across both lanes.  This is where the most important part of your bison jam navigation strategy comes into play.

For years now, I and many other visitors been employing a safe technique to encourage bison to move aside if they refuse to make way and it’s not possible to drive around them. By slowly approaching the animals—stopping only to let them move directly out of your path—they will eventually take the hint and clear space for your vehicle. Done carefully and slowly, without honking your horn or coming in contact with the animal, you can almost always reduce traffic congestion without any harm to the bison (or your car).

This is a technique used by rangers and park personnel, and for good reason: it usually works, including with a herd on the move.

Bison, though generally considered the most dangerous animal in the park, are not typically aggressive toward vehicles.  Like many wild animals, they often just look at cars as another big animal, and a bigger animal at that, so they will usually give away to you.  I’ve never seen a bison hit a passing car in an aggressive manner 1.  At long as you approach a bison slowly and respectfully, you can usually encourage them to make room for you without reprisal.

A big reason some jams last for up to hours at a time is because there are some narrow stretches of road in Yellowstone.  In many areas, there’s no shoulder, or there are big dropoffs or cliffs bordering the road.  In other words, there’s not any room for the bison to move out of your way!

This is when the “easing” technique described above often becomes necessary, else nobody will make it through the herd for some time. If the “lead vehicle” in your lane manages to find a way to start cutting through or around a moving bison herd, keep pace with it.  I can’t emphasize this enough.  Once someone finds a path through a herd, you need to stay with them.  If you remain tentative, the bison will find a way to cut over between you and the car in front of you, slowing you and everyone behind you down again.  You’ve essentially reset the bison jam.

Just like the herd of animals you’re passing, a line of vehicles should move as its own herd to pass the animals.

If You’re Approaching a Jam From the Other Direction, Please Don’t Stop

Sometimes, you’re lucky enough to have someone at the front of the line of cars who does know about easing around and through the herd.  But then they hit another roadblock: oncoming traffic.  One of the biggest reasons for wildlife slowdowns is the oncoming lead car that, instead of continuing on its way and keeping the other side of the road clear (for bison or for passing vehicles), stops so that the driver can take pictures out the window.  And then the carload behind them does the same thing… 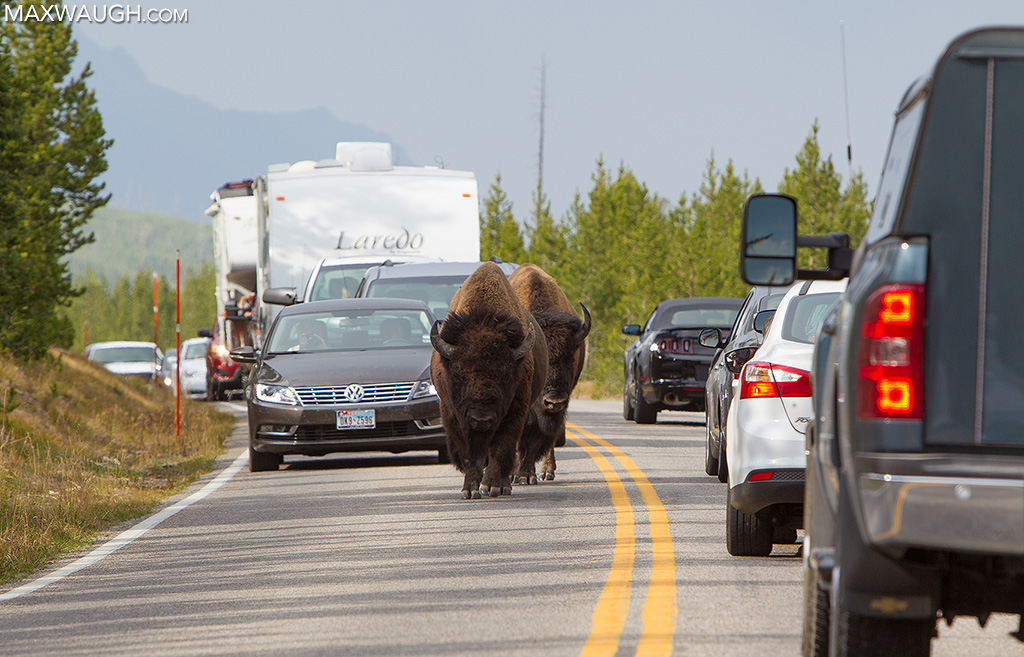 The worst bison jams often occur when oncoming drivers stop for pictures.  In this case, the cars at the front of my lane prevented both lanes from passing, and didn’t give the bison room to move aside, because they kept stopping to take photos.

One of the keys to the easing technique mentioned above is having space on the road for the bison to move out of the way, or for you to pass them.  This is all perfectly fine (and within park rules) if done safely, but you need real estate to make it happen.  So if you have a sudden pileup of vehicles starting right at the point where you’re going to escape the jam, nobody can get anywhere.  Well, I suppose the bison will keep ambling at their own pace, but even they may be slowed down by the bottleneck created by converging lines of traffic and can’t move left or right to make room for vehicles as they normally might.

Look, bison are everywhere in Yellowstone.  You can get photos of them safely, outside of your vehicle from a parking lot or pullout nearly anywhere in the park.  There’s no need to stop for thirty seconds in the middle of the road and slow traffic both behind and in front of you.

(And before you say it, I recognize the irony of lecturing people about not taking photos from their vehicles in the road while posting images I’ve obviously taken from my own vehicle.  The important point here is to not block traffic for extended periods for the sake of your photo op, especially if there’s an opportunity to clear up major road delays in a jam.  Had I been leading the line in my lane in the photo above, I wouldn’t have touched my camera… but we were stopped thanks to the folks up front.)

Keep in mind that if you do decide to pull around or through a bison herd, you may get dirty looks, angry gestures or even expletives yelled at you by other park visitors.  It’s happened to me a few times, but I’ve reviewed these methods with Yellowstone’s law enforcement rangers in order to clarify the best strategy for handling stubborn bison on the road. They confirmed that the aforementioned way of easing through the herd is an accepted method, provided one passes at slow speeds, no contact is made and no harm comes to the animals.

Granted, it won’t stop the dirty looks, but it’s nice to know that there is a legal and safe way to prevent a bison jam.

So remember: If you encounter bison that refuse to cross the road in a timely manner or are blocking one or more lanes of traffic during their commute, use the slow and quiet approach to free yourself and others!

2021 Update: Over the years this article has receive generally positive, but occasionally mixed feedback. As mentioned, this information was based in part on discussions I’ve had with park rangers, and recently I spoke with a ranger district head to get an “updated” take on the strategies mentioned here. Their recommendations echoed the general ideas in this piece. While nobody should take that as an official endorsement, it is important for me to ensure the advice here isn’t countering what park enforcement would recommend.