My annual spring Yellowstone trip began at 5:15 Friday morning, when I left Seattle for the long drive eastward.  It wasn’t going to be as long as my usual drive, mainly because I wasn’t heading directly to the national park.  With the onset of the Memorial Day Weekend, I wanted to miss at least a little of the mob scene, so I opted to drive to eastern Idaho instead.  Rather than driving 13+ hours, I only had to go twelve.

There was another reason to head to Idaho.  Last year over the holiday weekend, I led a private tour there with a client, and we had one heck of a time photographing all sorts of cool wildlife, especially owls.  So I wanted to return mainly to see if the owls would be out and about again.

When I approached my first destination—Market Lake Wildlife Management Area—late in the afternoon, it was raining.  But it was only a light drizzle and there was still a little daylight left.  I figured even in sad weather I could try and get a sense of how things would be looking Saturday morning.

As it turned out, the owls couldn’t live up to their 2016 form (when we saw 15 and 19 owls respectively over the course of two days in this area).  I did find a Great horned owl family, perched almost directly above the trail, but there was no sign of the Long-eared, Short-eared or Burrowing owls I saw last year.  Nor could I find the elusive and tiny Northern saw-whet or Flammulated owls, both of which have been seen here.

No owls… but no worries.  It turned out there was loads of other activity.  I saw numerous small colorful songbirds, from tanagers to goldfinches to kinglets, and one lovely black and orange passerine I’ve never seen before (haven’t IDed it yet).  There were loads of raptors around, from harriers to various hawks and kestrels.  Market Lake is a really good spot for waterfowl, waders and other aquatic bird species, and just after I finished looking for the owls, one of the more elusive wetland birds appeared before me. 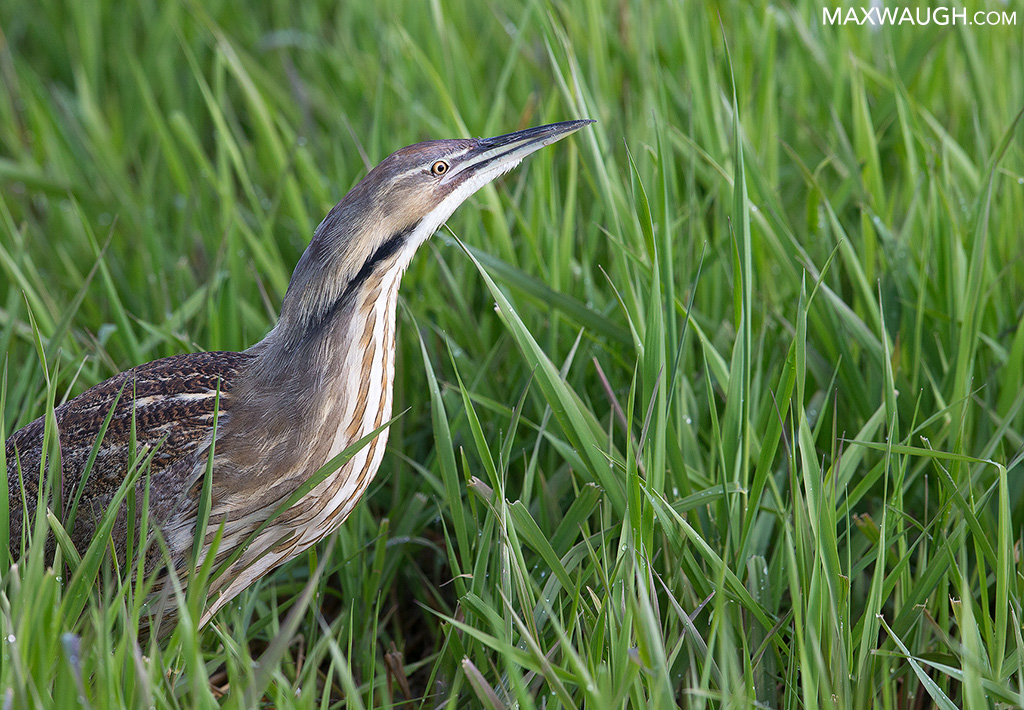 It was an American bittern, a heron species that is generally pretty shy, and which spends most of its time standing straight doing a good job of blending into really tall grasses.  This one was actually standing on the road as I pulled out of the parking lot, before making its way into the grass.  I’d only seen bitterns a couple times before, and this was my first decent photo op.

There was a Sandhill crane family with two colts browsing for food along the dyke.  There were also plenty of waterfowl around, including several duck species, Canada geese (literally herds of adults and goslings crossing the road back and forth), and even some Trumpeter swans.  I had my first crack at photographing young cygnets when this family crossed the road and went in for a swim. 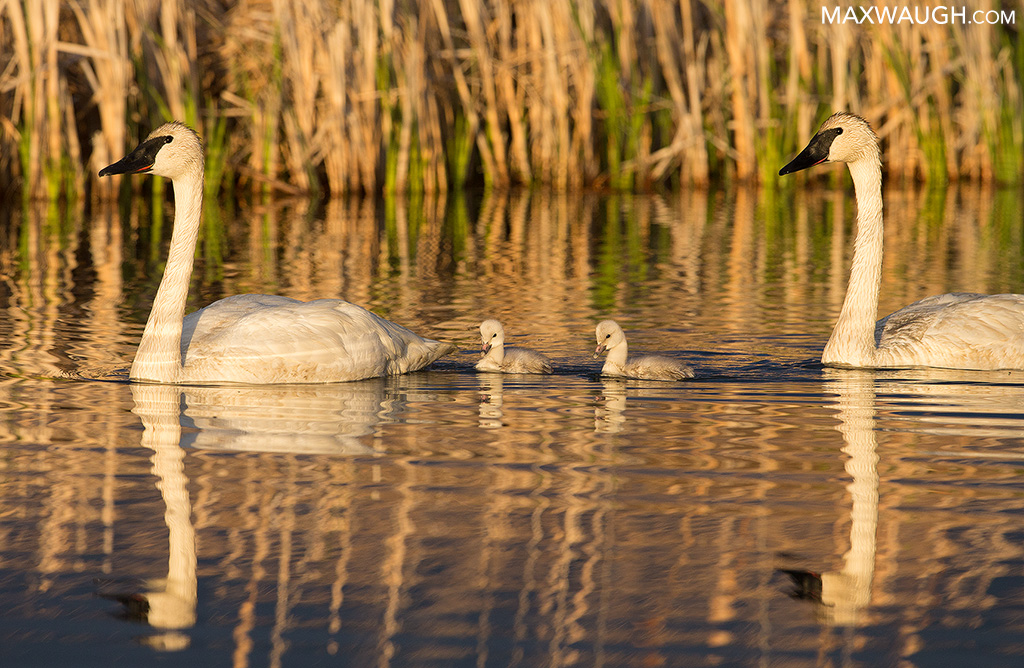 As you can see, the sun actually broke through and offered up some nice light at the very end of the day.

By the way, there are mammals there too.  I saw a porcupine (well-hidden behind thick branches, as is usually the case), cottontail rabbit, a couple of mice or voles… and an otter!  The otter popped up a couple times as I was slowly driving along the canal, but it never remained above water for long, so I couldn’t get a picture.

I stayed in Idaho Falls overnight, and was back out at Market Lake a little after sunrise.  Well, what I believe was sunrise.  A low fog covered the surrounding fields and wetlands, and though the sun finally broke through for some brief moments, it was overcast for much of the early morning.

I saw the swan family again in the fog before proceeding down to check on owls again.  Aside from the Great horned family (two adults and two owlets), there was no other activity of note in the trees.

The next couple hours were spent photographing more birds, including harriers carrying in nesting materials, Marsh wrens perched on cattails, and Brown-headed cowbirds displaying for each other.  Eventually, I wrapped things up and moved on to my next destination, the nearby Camas National Wildlife Refuge.

Last year I had some luck at Camas with more owls, porcupines and some waterfowl, so even though it was later in the morning it was still worth a shot.  And it proved to be a fruitful visit.

I drove the canals first and spent a fair amount of time photographing territorial Red-winged blackbirds from my car.  As you can see, they were putting some energy into their reedy calls this morning. 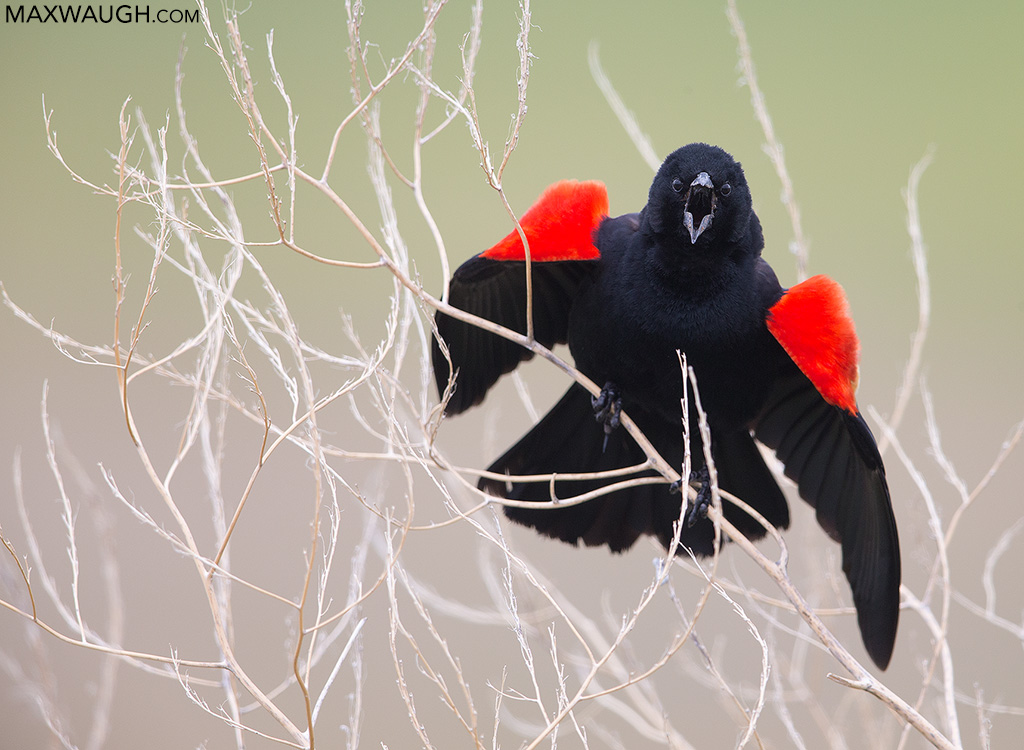 There were endless Yellow-headed blackbirds here too, a few Western and Eared grebes, many Ruddy ducks and Northern shovelers, and I saw my first Northern pintails of the trip as well.  For the most part, the waterfowl here is very shy and swims away the moment you pull up nearby.  Other sightings of note during the drive include a Sandhill crane, and a few Short-eared owls, all very distant (the nearest one happened to catch its breakfast just as I arrived, and flew off with its meal in the opposite direction).  Killdeer skittered along the gravel road.

Back near the visitor center, I parked the car and took a short walk in the area where we saw owls and several porcupines last year.  The North American porcupine remains near the top of my wish list.  Last year was the first time I’d seen one since a nighttime sighting in Yellowstone twenty years ago, and I still don’t have any decent photos (I’ve had better luck with porcupines in the jungles of Central and South America, believe it or not), because all of the daytime sightings have involved a porcupine huddled behind a thicket in a tree.

Well, the first porcupine this morning was also in a thicket, but there was a small window through which I could see most of its face.  So I now have at least one semi-porcupine photo from North America, but there’s a lot of room for improvement. 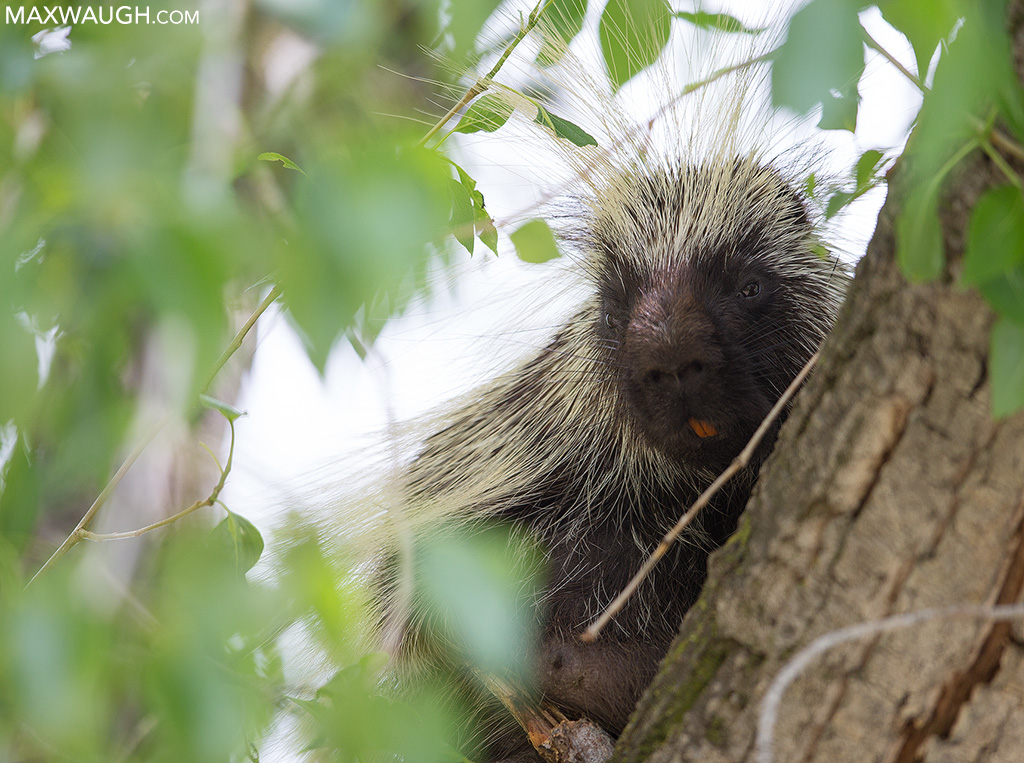 There was a second one on a different trail, but that too was a poor place for photos.  I also saw one Great horned owl, high up in a tree, and that was about it.  I didn’t feel like searching for the tiny but rare Hooded warbler that had the local birders atwitter, so I packed up and headed out.

Originally, I was planning on staying in Idaho two nights to avoid the worst of the Yellowstone crowds, but I decided I may as well just get to my cabin and rest and get some work done this weekend.  The only remaining question was how long the lines would be stretching from the west entrance of the park when I arrived.  Last year, the cars waiting in line were backed up half-way through West Yellowstone.

Thankfully, I was arriving in the afternoon, so the worst of it had dissipated.  I was inside in less than two minutes.  Yes, traffic on the park roads was bad, but I didn’t have plans to stop and search for wildlife too much, so I wasn’t annoyed by the backup.

I did end up making a few stops though.  First, I spotted some friends, so I pulled over to say hi and chat for a bit.  Next, I planned to cut east from Norris to Canyon so I could go over Dunraven.  And that’s when I had what will be the rarest wildlife sighting of the trip: an animal on the Norris-to-Canyon road.

I’m pretty sure I’m only the third person in park history to spot any wildlife on this dull 11 mile stretch of densely-forested road.  Ever.  Someone may want to check with the park service on that.  Anyway, I never see anything along this stretch (thank goodness it’s only eleven miles!), but this time, there was a fox. 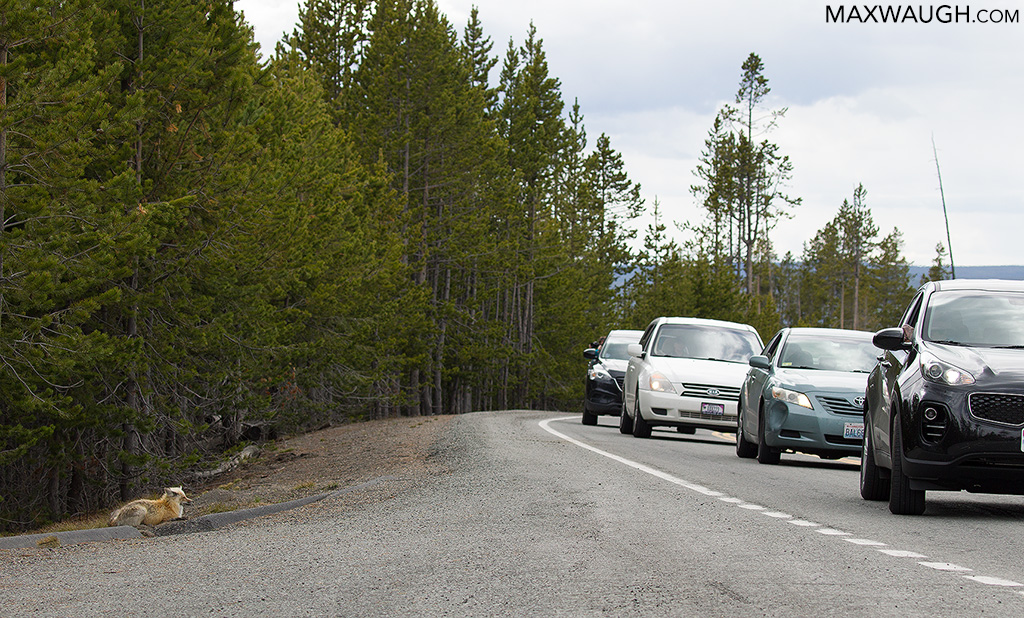 As the fox was skirting the trees along the road, I pulled ahead into a pullout, and watched as it parked itself next to the road.  Hard to say whether it’s been fed… since it wasn’t actively approached the stopped vehicles, I wouldn’t say that’s necessarily the case.  Nonetheless, it seemed comfortable with all the attention, though so are our foxes in Silver Gate, and many of those end up getting hit in traffic.  Which is what almost happened to this fox, when it cut across the highway in front of a speeding SUV, which barely missed it.

North I went from Canyon, and while heading up Dunraven Pass, I spied a cinnamon-toned shape on the hillside above the road.  After a U-turn I came back slowly, and sure enough, had found my first bear of the trip.  And also started my first bear jam, as traffic piled up in both directions.  It was a young bear, pretty far up the hill, so I didn’t linger, and thankfully found a way to sneak back onto the road amidst the tumult I had created.

Up over the pass, down the other side and on through the Lamar I went.  I finally stopped again past Pebble Creek, after seeing a van pulled over and people walking away from the road… I just barely spied a blackish wolf they had seen in the distance, so I found a safe place to park.  Turns out the Lamar Canyons had been on a carcass since at least this morning.  Ultimately, I saw three of them, all various shades of black and dark gray, as they walked along the creek and gathered to gnaw on the scant remains of the carcass.  All pretty far off, though specific wolf IDs could probably be made from the photos.

In order to leave, I had to drive back down the road and turn around at the Pebble Creek trailhead.  I did this just as a small hiking group reached the road, and the group’s leader offered his thumb in hopes of catching a ride.  I made room in front and he hopped in.  The group had started hiking at Warm Creek up near the northeast entrance and had connected with the Pebble Creek trail and come back down, so they needed to get their car at the Warm Creek lot.  All told, the hike was twelve miles, much of it through snow (at one point they lost the trail in the snow, but followed elk or moose tracks, which led them in the right direction… something that happened to me once on a hike in northeast Washington many, many years ago).  The highlight of the hike, the gentleman told me, was encountering otters at about the halfway point.  They were swimming in the creek, then came out and ran and slid in the snow, not paying any mind to the hikers.  Maybe all this otter action these last two days is a good sign for what’s to come!

After dropping him off, I made it to Silver Gate, where I unpacked before making a quick drive up to Cooke City.  On the way back down the highway, one of the local foxes was out in the middle of the road.  Hopefully not begging for handouts!  It walked off into the woods, but it was nice to have one more wildlife sighting for the day before I settled in.

Yellowstone Spring 2017 Trip Report: Days 2 & 3
Yellowstone Bison Jam: How to Deal With Buffalo on the Road