I was still feeling worn out from two long days and wasn’t prepared to brave the weekend crowds in the park, so I stayed in Silver Gate all day on Sunday.  Which doesn’t mean the day was devoid of activity.

After sleeping in (5:50am!), I caught up on some work before venturing out to explore our property.  I try to do this at least once every visit.  You never know what you might find in the woods or along the creek.  I try to take my medium lens along just in case.  We get moose, deer, bison, an occasional bear, fox, Harlequin ducks (in spring) and more.  Usually I’m just hoping for a pine marten, having only seen one on the property.

The first exciting find was… poop!  Otter scat, to be exact.  This actually did get me excited, as some of our recent cabin guests reported an otter sighting a couple weeks ago.  That was the first time I’ve heard of otters coming through our stretch of Soda Butte Creek, so I wasn’t sure, but the guests knew otters and seemed pretty confident in their ID.  And it just so happened the poop I found was full of fish scales and similar in appearance to other otter scat I’ve seen.

I skirted the edge of our woods, following the creek around the bend.  A Yellow warbler flitted among the willows, but I couldn’t get a clear shot.  When I looked up, a cow moose was staring back at me on the far side of the willows, near our bigger cabin (fittingly, we’ve named the cabin after the moose constellation). 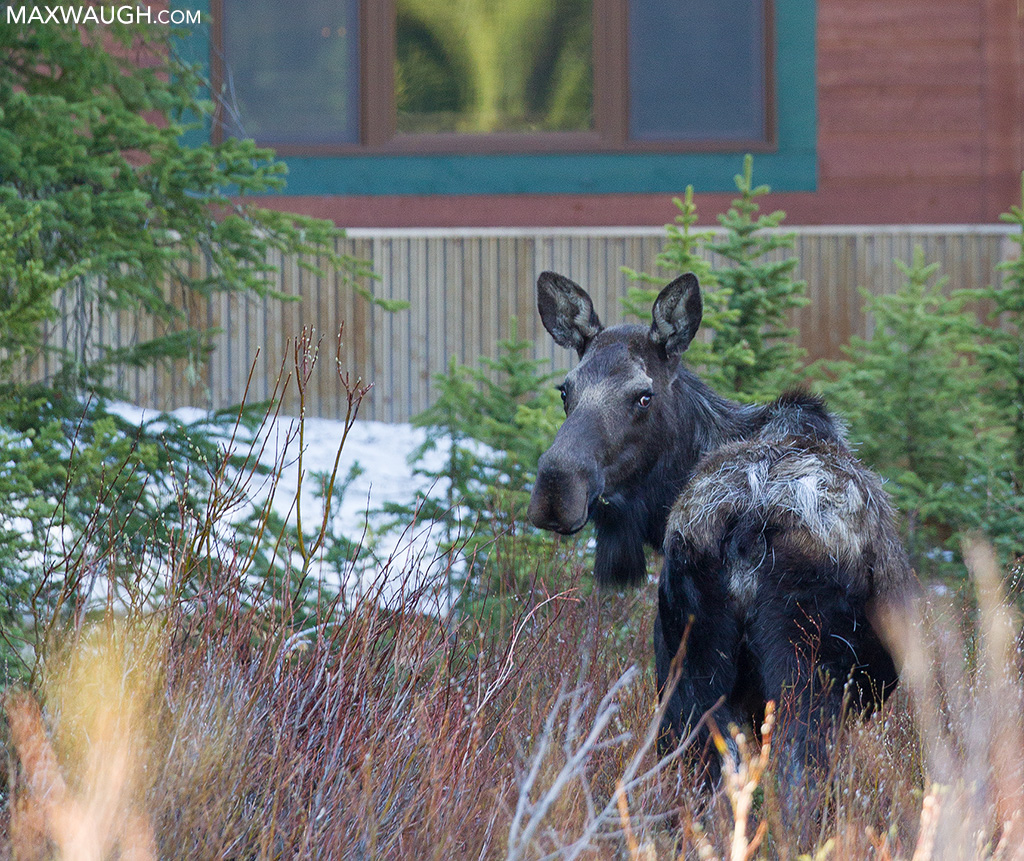 The moose wandered up past the cabin and eventually parked itself on the grass next to our driveway.  When I walked into town later I had to cut through the neighbor’s property so as not to spook it.

Later in the morning, I opened the door and found the moose bedded down in the trees in between our two cabins.

In the afternoon I went for a local hike, seeking out Silver Falls, which I had never visited.  It’s a short climb through thick forest that opens into some semi-burn.  I did a lot of “bear calling” just in case, since a grizzly has been sighted in town recently.

No bears, or any other wildlife to report, however, and I made it to the base of the falls.  Some passing rain had departed, and it was bright and sunny, so I sat and relaxed for a while before heading back down the trail.

Later that evening, my mom arrived at the cabin.  When I went outside I saw I was not the first one to greet her, as the moose was now grazing right in front of our deck.  I kept my fingers crossed that it wouldn’t use our satellite dish as a scratching post and throw everything out of alignment.  At one point it gave a great shake, and moose hair went flying everywhere.  Spring shedding is in full swing, I suppose.

Finally, I decided to head back into the park this morning.  After a few delays in getting going, I made it in before six.  The Memorial Day weekend is coming to a close, but the roads are still fairly crowded.  A couple cars were pulled over for a moose at Warm Creek.  Down in the Lamar Valley, novice park drivers struggled with the bison on the road (they had not read this article, apparently), causing a few delays.

This, at least let everyone soak in the joyful sight of bison calves chasing each other and frolicking in the sage.  If there’s one sight guaranteed to bring a smile to everyone’s face, it’s energetic little red dogs bouncing to and fro.  Every driver I saw coming the opposite direction was sporting a big grin.

I only had the morning to explore, so my main goal was to start checking out a few different spots in advance of my photo tour next week.  I made a few stops here and there in the Tower area, and made it halfway up Dunraven Pass with very little to show for my efforts.  As I returned back down the Tower Road and passed the waterfall, I encountered a couple vehicles stopped in the middle of the road.  Next to one of them was a black bear.

I pulled into the neighboring pullout and fired off a few shots as one of the Tower sows and her two yearling cubs climbed the stone wall, disappeared over the edge, and then popped back over.  Momma walked right past my window. 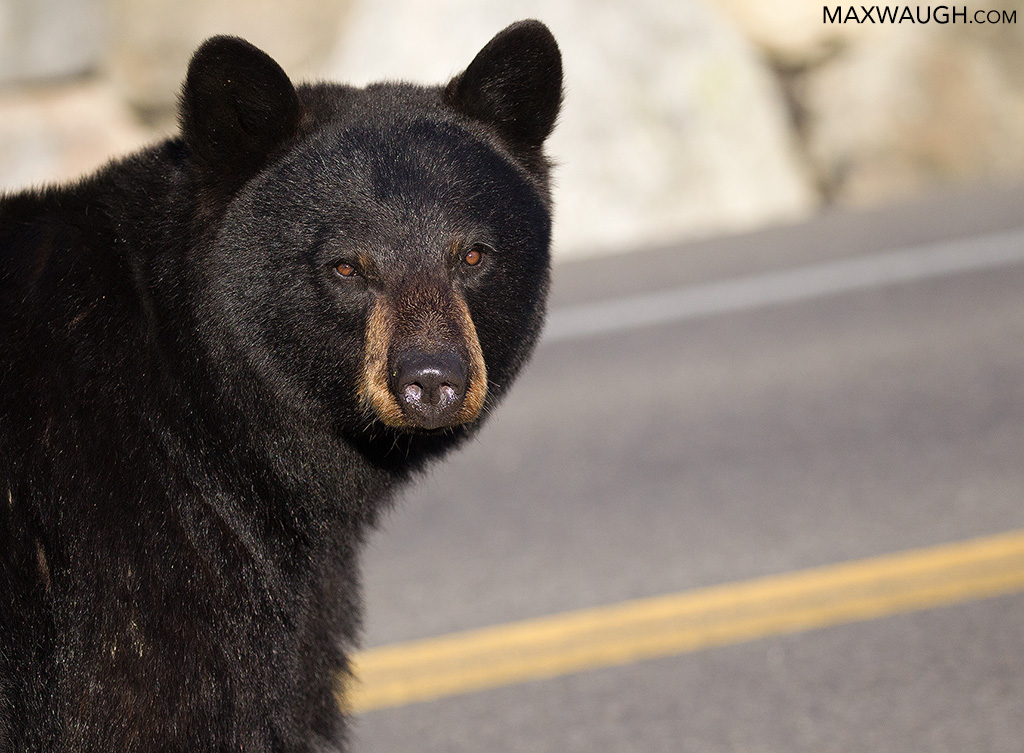 It was only 7:15, but a ranger arrived quickly on the scene and the situation was turning into a bit of a mess.  So I headed out.  My next detour was at the Petrified Tree Drive (all quiet), before I opted to head back to the east to check a couple more favorite spots.  At Wrecker, I pulled over in time to catch a stretchy chipmunk seeking food.

Aside from a few pronghorns, there was no sign of other activity in that area.  Next I drove the Slough Creek Road… maybe a badger would pop out somewhere.  Loads of wolf watchers were scattered along the two mile stretch of road, but they were only joined by ground squirrels and bison.  Oh, there was a bald eagle perched in a distant tree.

Morning was moving along, and I figured it might be a good time to do my annual scouting foray up to Trout and Buck Lakes.  My main goal there every year is otters, but May is sometimes too early for them, and they haven’t been seen at all there the last couple years.  But it’s always worth trying (and I need the exercise).  Besides, I’d had at least three different otter-related finds or bits of news already on this trip… surely that was a sign?

I hiked to the top of the hill and ran into another photographer.  “Any otters,” I asked?  “Yeah, actually,” he replied.

I did a double take and had to confirm he hadn’t just seen a muskrat (a common mistake).  But he confirmed they were definitely otters… and there they were, swimming toward us.

Naturally, I was a little excited.  It’s been a while since I’ve had a close sighting in Yellowstone, and otters have been tough in general in recent years here for many photographers in the park.  In this case, three of them turned away from us and headed to the east side of the lake.  There, they climbed ashore and started making their way uphill.

I figured they were moving over to Buck Lake, but they changed their minds a few times, running up and down the hill before finally committing to the commute to the neighboring, smaller lake.  We headed up the trail and moved on to Buck in hopes of seeing them when they arrived.  I didn’t want to bother them during their transit, since they were likely much less comfortable away from open water and could be stressed by an encounter.

We made it to Buck in time, and within a couple minutes the otters arrived and slid into the water.  Once there, they began working their way among the reeds and long grasses lining the shore… good feeding grounds even without fish in the lake.  In the past, I’ve seen them crunching snails and leeches, and they do hunt for salamanders, an animal I had yet to see in the park.

Eventually, I got my first look at a tiger salamander.  Well, half of one… 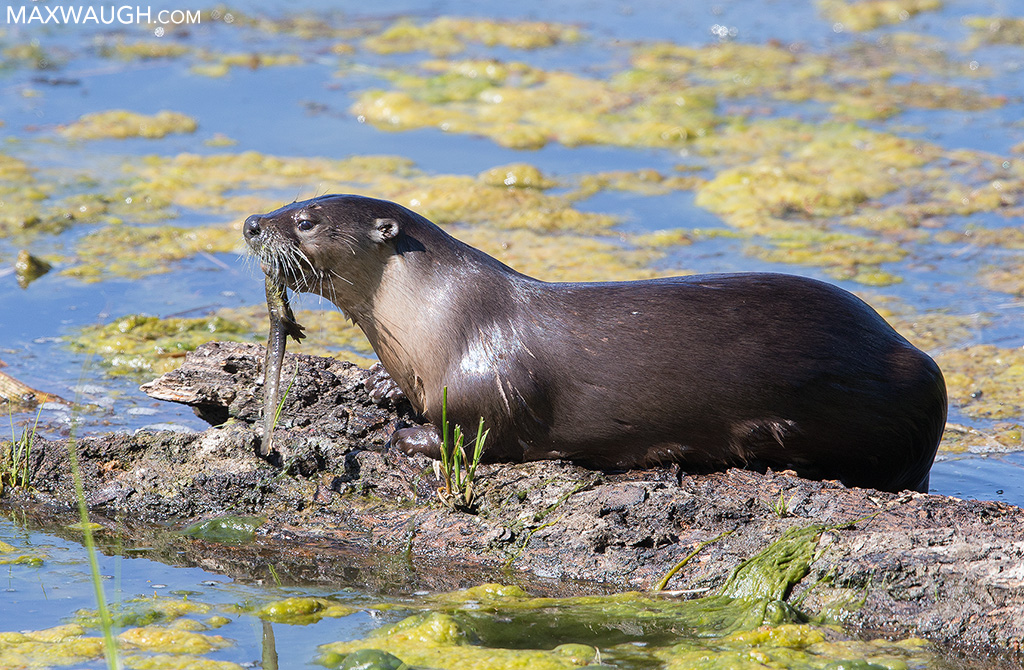 It was a wonderful way to wrap up the morning.  Hopefully I’ll have some more luck with them this week.

On the way home, I pulled over to join a small crowd at Upper Barronette, which was focused on something out in the open meadow, rather than distant mountain goats (of which there were three).  The animal occupying everyone’s attention was a fox.  A dark, somewhat scraggly fox.  It was actually difficult to tell if it was mangy, simply losing its winter coat or perhaps a semi-cross fox, with all the dark patches.

The fox stood at attention as I walked up the hill, and I was able to stand below it hoping to catch a mousing leap.  Well, it wasn’t the traditional high jump, more of a quick forward pounce.  I caught it in mid-air, but the late morning heat was already causing some distortion that made for less-than-ideal photos.

A few hours later I headed out for an afternoon drive, playing tour guide for my mom.  In Little America, there was a huge lineup of cars, and I simply assumed it was the local grizzly bear family that has been seen in recent days.  Nope!  A pronghorn had recently given birth to twin fawns.

After that, I had to decide whether to commit to a trip south over Dunraven Pass.  I went for it, despite reports of slow or little activity down that way.  I stopped at a few spots along the way in case an owl might be around (it wasn’t).  The drive all the way to Lake Butte Overlook was quiet, as predicted.  The only notable sighting was a pair of swans in a small pond just beyond Canyon Junction.

By the time I made it back north and over the pass again, the nice afternoon light was kicking in.  And I did stop at least once for wildlife… a couple of bull bison near the Chittenden Road pullout. 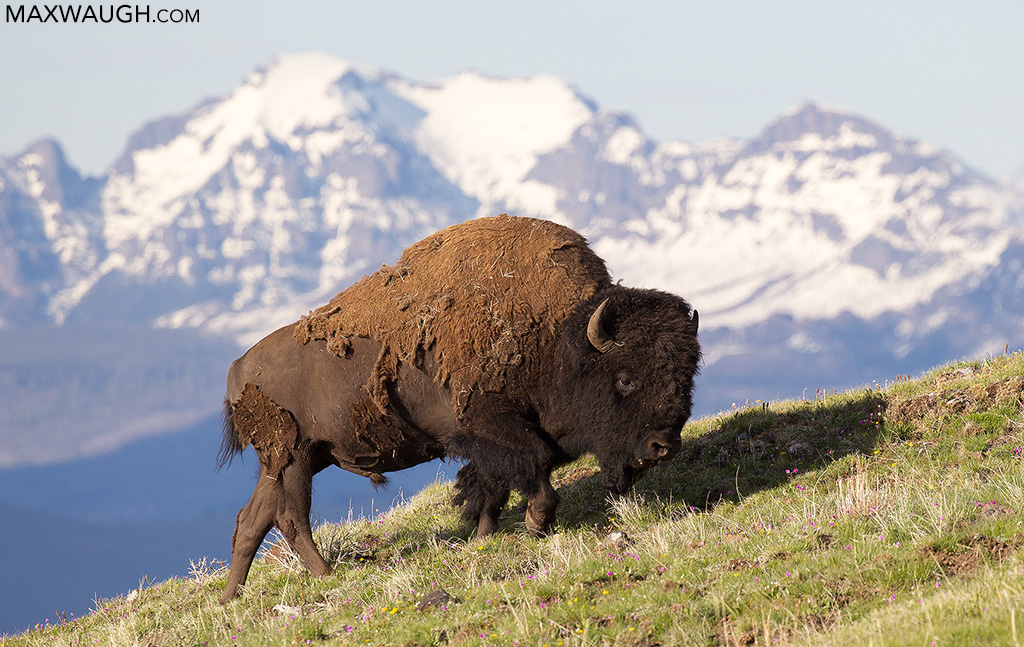 The trip south may have cost me a badger sighting.  A little over halfway through the Lamar Valley, a line of photographers was staking out a couple of freshly-dug holes.  The badger had been active for some time, but I was about twenty minutes late to the party.  Oh well.  At least I already had a mustelid fix for the day!