After Monday’s otter success, I naturally wanted to continue my string of luck with mustelids on Tuesday morning.  First, I made a quick run down to the middle of the Lamar to check on the badger holes I visited the evening before.  I didn’t linger long.  The hillside was still in shadow and it was highly unlikely that the badger (if it was even still there) would pop out in the morning cold.  Besides, otters were the priority.

I spent the rest of the morning at Trout Lake.  And Buck Lake.  And Trout Lake.  And so forth.  Not knowing when the otters might choose to commute back to Trout from Buck (where I’d left them the previous morning), I made sure to spend time at both lakes, hiking back and forth every half hour or so and waiting them out. 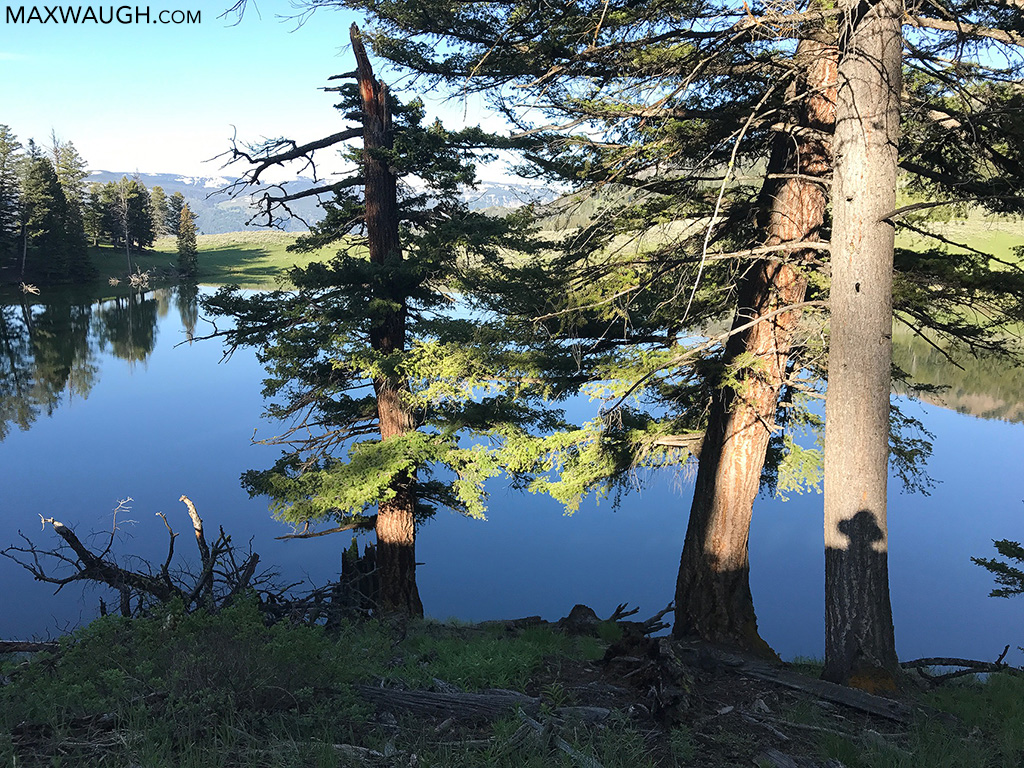 It didn’t matter.  There was no sign of any mammal activity.  There were plenty of waterfowl, scaups, goldeneyes and some loud Canada geese, and eventually even a swan showed up (lots of random swans scattered through the park on this trip), but no otters.  Before I left, I did one final circumnavigation of Buck Lake.  I found loads of fresh scat, and even some still-damp urine markings, so the otters were likely holed up around there somewhere.

But I had to go.  Later, I heard from others who arrived just as I was leaving that they didn’t have any luck either.

For the second half of my day, I had promised my mom that I’d take her up on her first visit to the Beartooth Highway.  As expected, there was oodles of snow.  Winter sports enthusiasts were taking full advantage, as were their dogs. 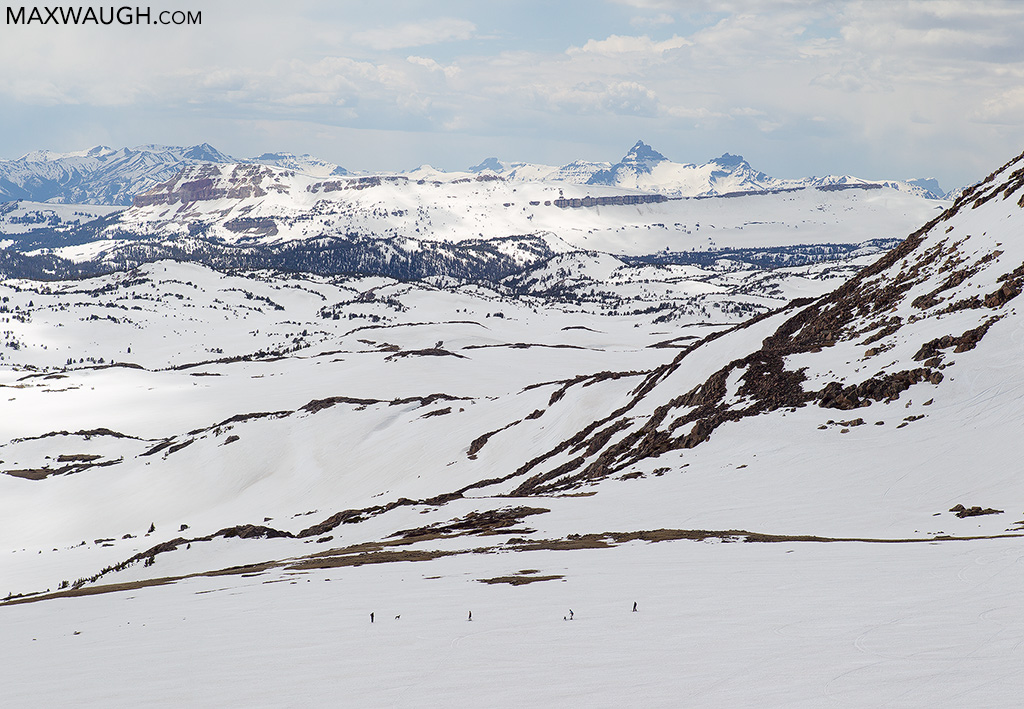 It was the first time I’d actually seen the ski lift at the top active, with a few skiiers and a lone snowmobiler riding the slopes.

I had hoped we might luck into some mountain goats, but they were nowhere to be seen.  We had to settle for the gorgeous scenery instead.  Darn.

On Wednesday, I made it out at a decent time with no real goals in mind.  Perhaps the lack of urgency somehow contributed to a slow morning photo-wise, but it was a good morning nonetheless.  I finally had a chance to pick up the camera in Little America, but unfortunately I had arrived a minute late.

The pronghorn with two newborns fawns was out in the open, bathed in glorious light.  By the time I pulled over, set up my gear and was prepared to shoot, they were on the move.  So I didn’t get the family portrait I’d hoped for, instead coming away with a few snaps of sprinting mom and one of the fawns before they disappeared behind the hillside. 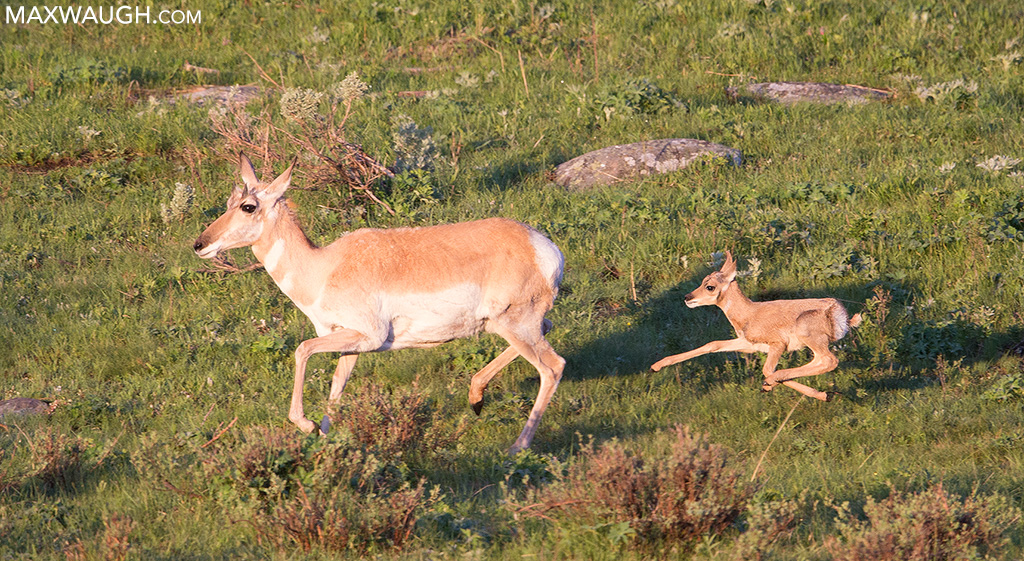 I waited for them to re-emerge, but they’d found a good hiding spot, so I eventually packed up and continued west.

The Tower Road was devoid of life, so I figured I’d head toward Mammoth and visit a few areas I had yet to explore on this trip.  At Phantom Lake, a lone black bear grazed near the withering pond.  I drove on.  After crossing the high bridge, I approached several cars pulled out below Mammoth.  My best guess was that a grizzly bear—probably Quad Mom and her yearling cubs—was out in the hills somewhere, and this was confirmed when I asked one of the folks watching off the road.  However, she was out of sight at the moment, and still fairly distant.  I still had some nice morning light, so I figured I’d continue uphill and keep looking.

I made it up to the Upper Terrace Drive, where you never know when you might find something interesting… but it was fairly quiet at this point of the morning.  So I returned back to the Quad Mom gathering.

By now the crowd had moved down toward the bridge, trying to anticipate the bear family’s next move.  But when she finally came out in the open again, she had moved back to the west… and was still far away.

In general, this was the theme this particular morning.  Not too much in the way of close wildlife activity, but it did give me a chance to say hi and catch up with a number of my former tour clients.  From Mammoth to Blacktail to the Lamar, I visited with several friendly faces who are now park regulars like myself.  It made for a fun morning, though I ultimately touched my camera very little.

In the afternoon, I had to make a run to West Yellowstone to conduct some business, and then I had a decision to make.  I’d been told about a fox den outside the park, and I was weighing whether to try for it or not.  It would mean a long drive home at the end of the day, but I figured it was worth scouting, especially with tour clients coming in next week.

I found the den with no problem, but later questioned the decision to make the trip.  For the first time in at least a few days, the adult foxes did not return before daylight ran out, so I never had a chance to see the majority of the dozen or more(!) kits. Instead, we got sporadic sightings of one or two during the late afternoon.  As it was getting dark, we had as many as six.

But it was getting too dark, and I still had a long drive ahead of me. Four-and-a-half hours later, we made it back to the cabin at 1:30 in the morning (with one more fox in the road just inside the NE gate).

Two hours later, I was awake with my alarm and ready to drive down to Old Faithful for sunrise.

My morning was shot, since after the brutal afternoon and night of non-stop driving, I didn’t have the energy to go anywhere.  So I spent the morning getting some work done at the cabin.  For the afternoon, I hoped to get back into Yellowstone for some adventures (my free time is running out before the tour starts!), but it took longer than expected to fix my mom’s broken-down car.  It’s probably more important that she can actually drive home from here.  I guess.

So it felt sort of like a wasted day.  But at least I consoled myself with a massive milkshake from the Stop the Car Trading Post.

I was awake by 4:30, without an alarm, so I managed to get on the road at a reasonable hour.  Friday is the last day before I head out to pick up my spring tour clients, so I had hoped to make the most of it with a bit more scouting and some good photo ops.  It didn’t quite work out that way, especially since I had to return to Silver Gate once again at midday.

A bull moose with small nubs vanished into the trees as I drove in from the northeast gate.  Truly, it was the most exciting part of my morning.  Later, I did see one or two more moose in the willows at the Confluence.

I drove west all the way to Hellroaring, stopping at a few different spots to check activity.  At the Hellroaring trailhead lot I paused.  Ever since I found a couple pygmy owls here two years ago, I stop to listen for calls (how I found them before), while I scan the rock pile.  Not for pikas (I did see one this morning), but for weasels or martens, which go after the pikas and both of which I’ve seen at this spot.  None of my three rarer target animals were there, so I returned to the east.

I wanted to give Buck Lake one more try.  So from about 7 to 9:30 I was up the hillside east of the Lamar.  I stopped at Trout Lake once or twice, but more fresh scat at Buck since my last visit told me they were more likely to be there.  No luck, however.  Instead, I did see a cinnamon black bear grazing on the far shoreline, while scaups, goldeneyes, geese and a cinnamon teal swam in the lake.  Toward the end of my stay, I spied a muskrat swimming with a mouthful of vegetation back to its den.  And when I departed and hiked past Trout Lake, I saw another muskrat swimming there.  But no otters.

There was time for one last run to the east, where I wanted to check the site in Little America that had produced badger sightings in recent days.  No badger, and instead I found some friends and former clients photographing birds.  I waited around and chatted, hoping all the while that the badger might show, but it wasn’t to be.

Back to Silver Gate to fulfill my non-photo obligations (which included a much-needed nap), and then I ventured back into the park for a couple more hours of free exploration to finish this short week.  My mom joined me for this final excursion, as we drove all over the northeast quadrant looking for… well, nearly anything.  But there wasn’t too much going on.  Several pronghorn jams (no fawns), wolf watchers set up at Slough.  I think I took some pictures of squirrels. 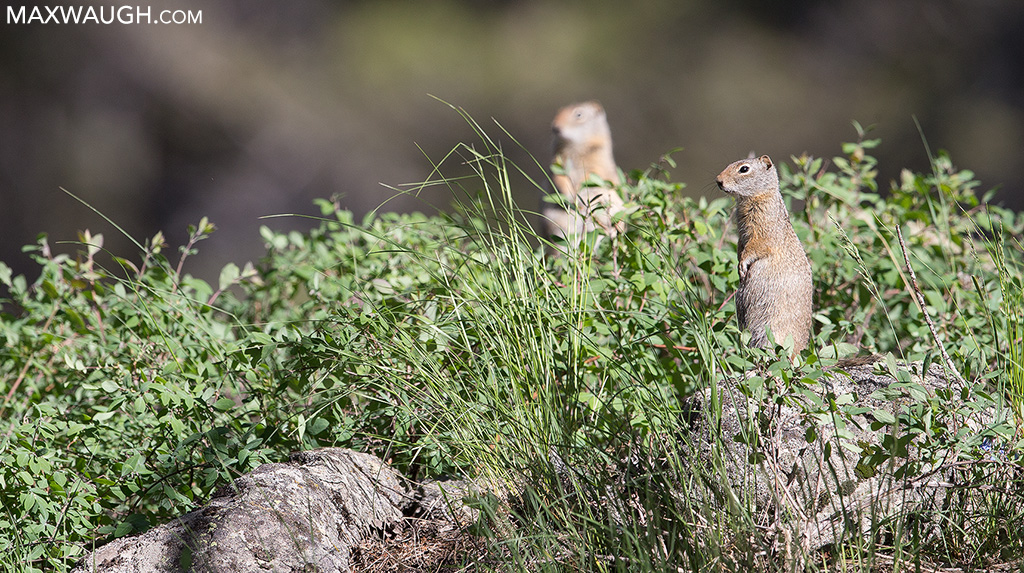 I made one or two final stops to check on bird nest activity before returning to Silver Gate to pack for the move over to Gardiner and tomorrow’s trip up to Bozeman.  On the way home, we saw a bison pretending to be a camouflage-wearing photographer, complete with gilly net… and a bookend moose to end the day. 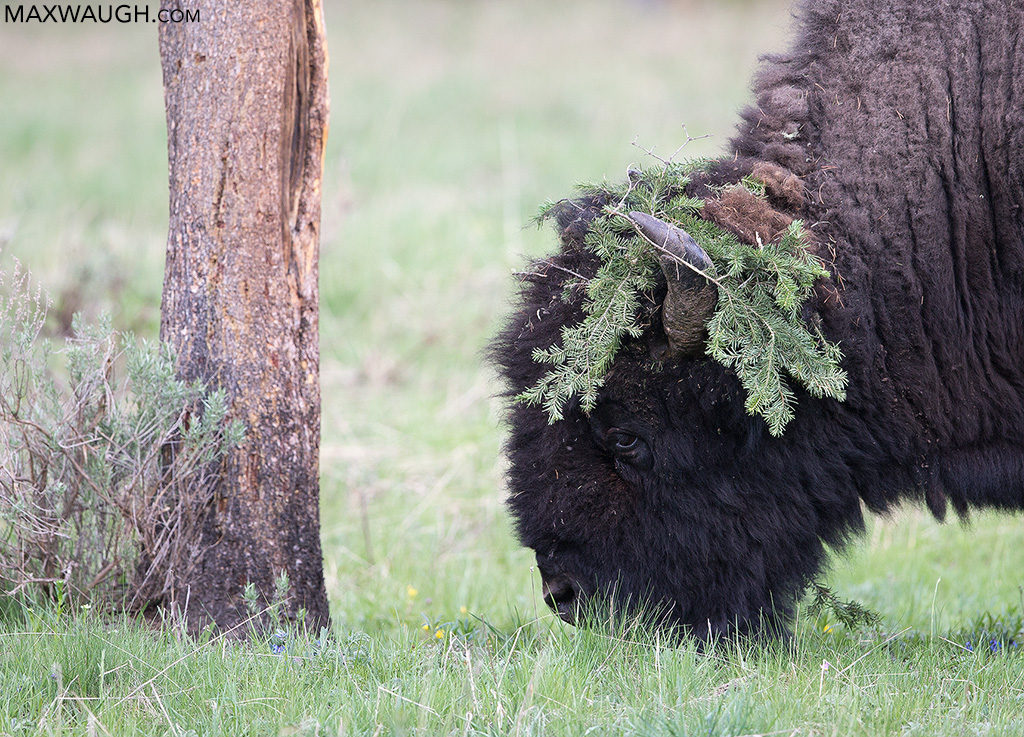 Assuming I get going at a reasonable time Saturday, I should have a couple more hours to explore before I need to hit the road in earnest.

I’m looking forward to the coming week.  Though I won’t have as much time to focus on trip reports, at least I’ll be getting some full days in the park, which should lead to many more viewing and photo opportunities for my clients and I.  It should be a fun week!