On Saturday I was scheduled to meet and pick up the clients for my annual spring photo tour.  This is the one tour I’ve led every year since becoming a full time professional photographer, and it’s allowed me to share my favorite place at my favorite time of year with many wonderful people.  This week’s tour features a mix of returning clients and new ones, and it’s already exciting to hear that everyone is open to photographing just about everything.

Before I traveled north to Bozeman, I did have a couple hours to explore the park one last time on my own.  Though I didn’t see a ton, I kept busy.  Another bull moose, different and bigger than Friday morning’s bull, was making his way across the open meadow opposite the Soda Butte Picnic Area.

In the Lamar, large herds of bison trudged on or near the road.  Pronghorn remain scattered throughout the Lamar and Little America.  Before I reached Roosevelt, I found a few birds to photograph.  A male bluebird was landing right next to the road (and not flying off immediately, for once).  It was preoccupied with breakfast, and had a squirmy caterpillar-like meal in its beak as it hopped around looking for more.  Just as it finally disappeared, I looked up to see a large white shape coming straight at me.

It was a Trumpeter swan.  They’re not seen all that often up in Little America, but this has been the spring for random swan sightings.  After buzzing me, it landed in a pond not far from the road, so I went down to snap some photos.  At one point, the swan actually came out of the water in my direction.  I had to back up to give it some space and to fit it in the frame as it sprayed off some water.  Then it resumed swimming.

The rest of the drive to the North gate was halted only for a very young black bear that was grazing on its own along a very narrow and treacherous stretch of road.  Luckily, rangers had been alerted to its presence and were arriving on the scene just as I drove on.

I stopped at our hotel for this coming week, and then proceeded with the drive north.  I left the camera gear behind, which is probably a good thing, because the badger sighting I had on the way toward Bozeman probably would have made me very late for my scheduled pick-up time with the clients.

Right along the highway, there was a badger sitting on the edge of its sett… right next to a wee little badgerlet (technical term).  It may have been the smallest badger kit I’ve ever seen.  However, it was next to a very busy stretch of highway, so even with my photo gear it would have been tough to pull over.

When I drove back through with my clients a couple hours later, the badgers had disappeared.  But at least I’ve got my first badger sighting of this year out of the way.  Now to find a photo opportunity with my group this week…

On the way back down Highway 89, I did spy a large flock of pelicans in the Yellowstone River, the last major wildlife sighting of the day.

We kicked off the spring photo tour with a 4:30am departure.  Wildlife was making its presence felt even before we left the parking lot.  One of my clients found a Columbia silkmoth on the hood of a car.  Wow, what a large and gorgeous insect.  I’d never seen this species before, and snapped a couple iPhone photos. 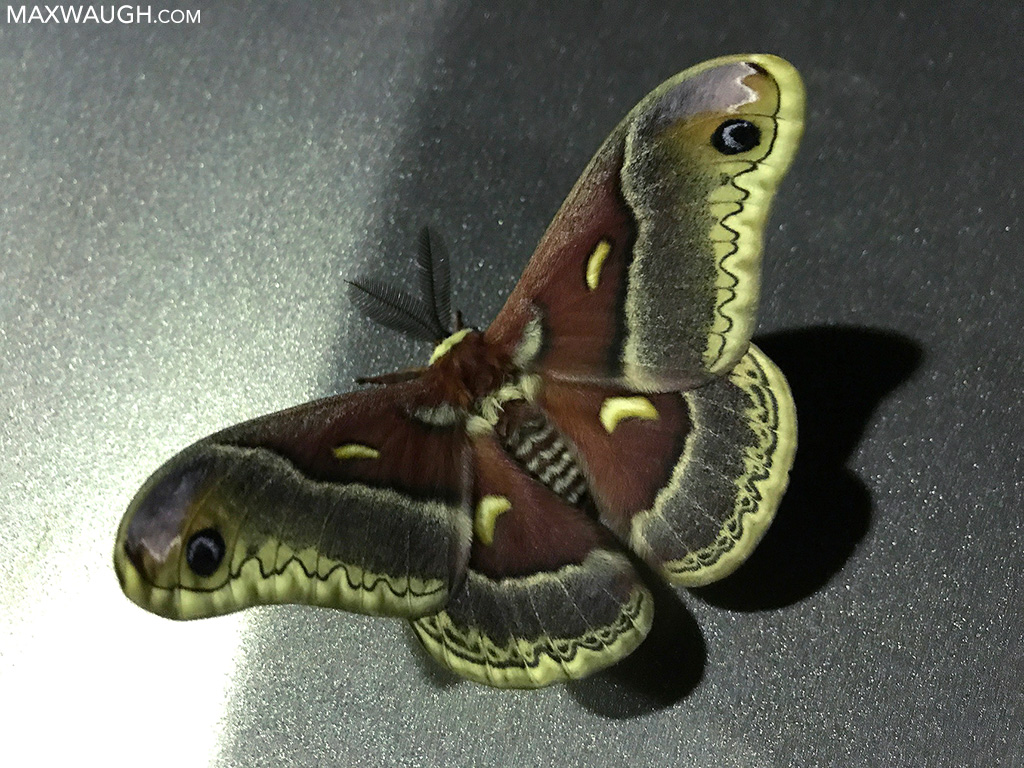 Unfortunately, we knew it wasn’t long for this world, as it was moving very slowly… and a robin was prowling the parking lot.  The bird would hop under the hotel’s exterior lights and fly up to grab the smaller moths congregating there.  By the time I made my third trip to load the van with supplies, the robin had found the silkmoth.  It was a goner.

We were up extra early because I wanted to head south on our first day.  The ultimate goal was to find grizzly bears at the lake.  First, we had to drive through Hayden Valley, which so often provides interesting photo opportunities at sunrise.  The mix of fog, morning light and potential wildlife is hard to pass up, and we walked down to the river to shoot various landscapes (sometimes with some birds mixed in). 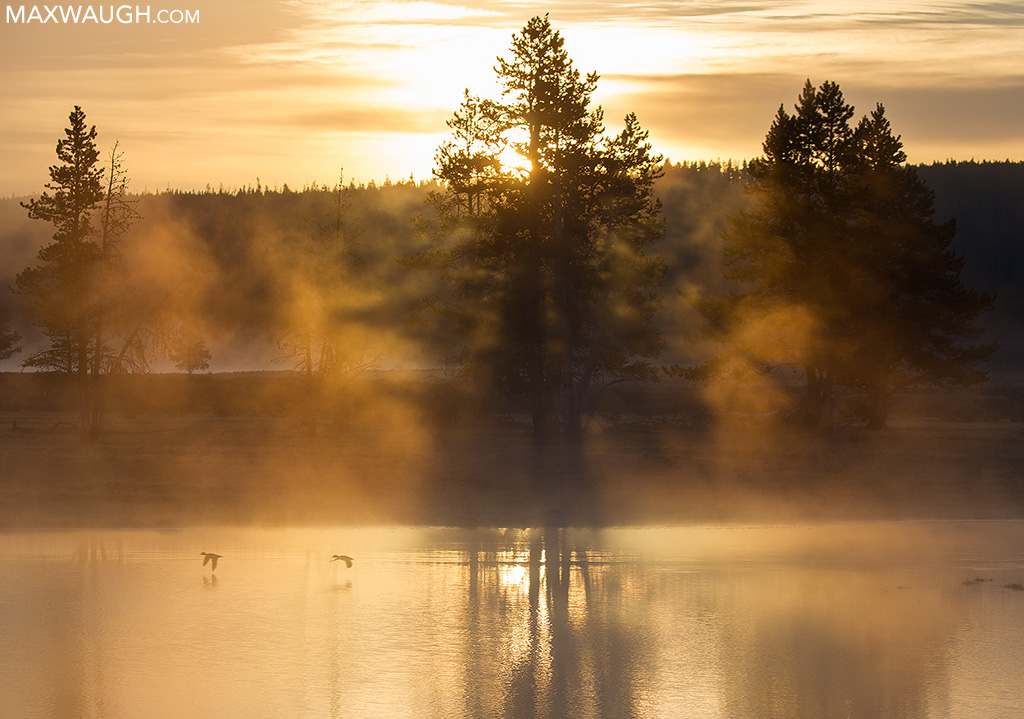 Yes, we officially began the spring wildlife tour with a landscape shoot.  This had better not become a habit.

We made it down to Fishing Bridge, turned east and drove past Pelican Creek.  Or is it Pelican Lake?  The entire estuary is flooded… I’ve never seen so much water there.

Eventually, we arrived at Sedge Bay, where the whole point of the morning excursion was waiting for us.  That would be Raspberry the grizzly bear and her two year old cub.  Unfortunately, they were so close to the road that we had to remain inside our vehicle (with Bear Management watching over a generally well-behaved line of cars).  This made it difficult to impossible for our vanload to shoot comfortably or at all.  I didn’t get much in the way of photos while I needed to make room for clients.  We were finally able to exit the vehicle when the bears moved uphill, but the best photo opportunity had passed.

Nonetheless, my clients were happy to have seen their first bears of the trip.  And that light-furred cub is rather adorable.

The grizzlies went further uphill and eventually bedded down.  The sow actually nursed the two year old, while I learned from friends that mom and cub had been chased down the hill earlier in the morning by a grizzly boar in the area.  It will be interesting to see if Raspberry, a first time mother, chooses to look after her cub an extra year.

The photo environment only grew worse with the rising sun and clouds of gnats everywhere.  It looked like it was snowing in front of the bears… snowing bugs, that is.  So we left and went up to Lake Butte Overlook.  There, we found the usual grouse on the hill, though he wasn’t displaying or drumming.  And we also had a morning snack in the form of a few dozen swallowed gnats.  I’ve never seen so many bugs up there before.

We decided to turn back to the west, and made a quick trip to Bridge Bay.  We spied a muskrat at Gull Point Drive, but not much else.  It was nearing lunchtime, so we soon stopped to eat at the Nez Perce picnic area.  Gray jays watched our every move.

Following lunch and a short rest, I decided to head back toward the lake, even though it was only noon.  Good choice.  Along the Yellowstone River, we spotted a massive flock of Canada geese floating in the water.  Then one of my clients saw a coyote on shore, not far from the geese.  The coyote wasn’t in hunting mode, but it did pop into the water and started swimming across the river.  The geese weren’t happy, but it was pretty cool seeing a coyote swimming in front of a huge throng of birds.  Yellowstone always offers up something new, without fail. 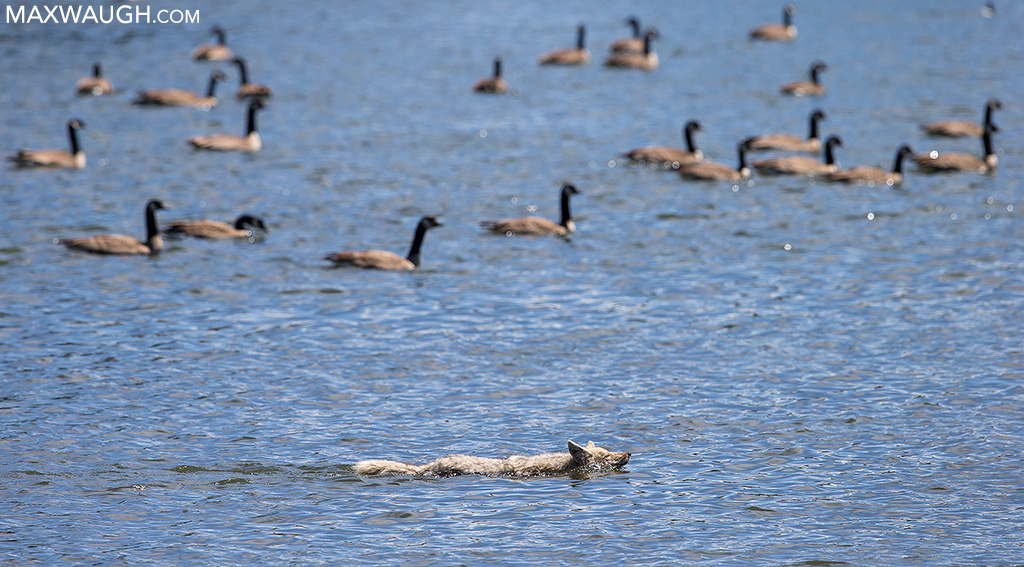 No sign of the bears as we passed Lake Butte, and I drove further east, up through Sylvan Pass.  I didn’t want to leave the park, but I did hope to find some bighorn sheep.  And we were in luck, as two groups of rams were right near the road.

On our way back toward the main loop, we found another coyote hunting in the meadows near the Storm Point trail.  It did mouse once, but only once, and in the meantime we had created a massive coyote jam.  Two rangers were needed.  We quietly slipped away.

After a stop at the Fishing Bridge store, we began the trek home.  Our final stop was in the Hoodoos to snap a couple quick landscape photos in the lovely late afternoon light.  Wait, landscapes again?  Whose tour is this?