I allowed my clients to sleep in Monday morning.  We didn’t leave until 5am.

The day’s target was the northeast, a part of the park I purposely avoided the first day for variety’s sake.  Black bears were a big goal, and the northeast is a natural destination when that’s the case.

However, we had a tough time finding them.  Nothing during our first run past Phantom Lake, Hellroaring, Petrified Tree, the Tower Road or Little America.  Our first subject ended up being bison, specifically a herd close to the road in Little America.  A few of the “teenage” bison traded off in animated sparring sessions as they prepared for adulthood.  But of course, the Little Red Dogs were the center of attention. 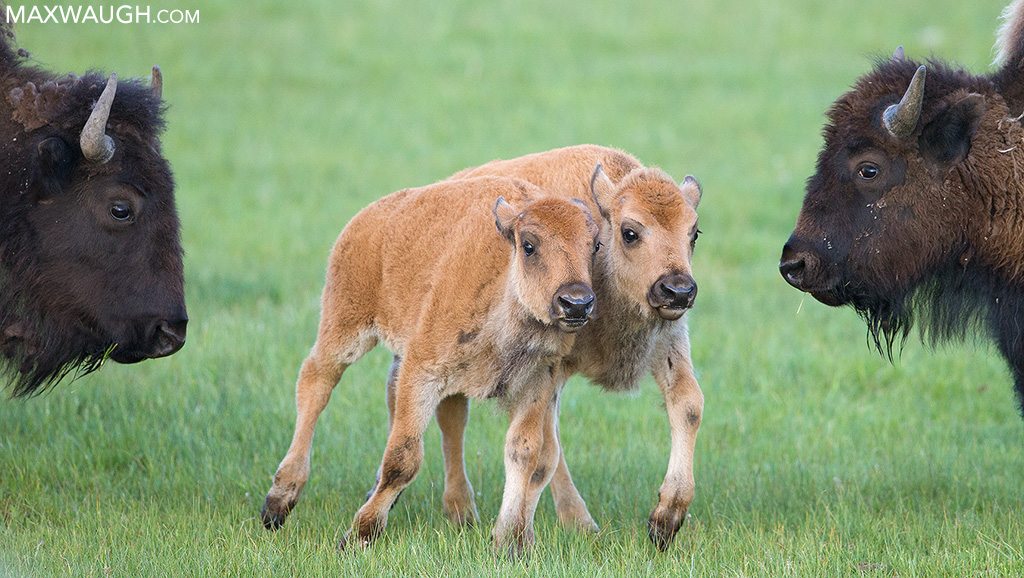 Further west, a pair of young pronghorn fawns hid in the sagebrush at some distance, so we returned to the bear neighborhood, and did finally spot a small black bear on a far hill off the Petrified Tree Drive.  Later, one of the Tower Road sows crossed near Roosevelt with her two yearling cubs, but in a busy spot with no chance of getting close or getting photos.

My clients had some fun shooting the birds at Floating Island Lake, particularly the Yellow-headed blackbirds, so I decided to take them to a better blackbird spot along the Slough Creek Road, where we spent a good chunk of time.

Somehow, all this activity ate up a lot of time, and we were soon forced to decide where to do lunch.  One of my clients suggested we head up the Beartooth, something I had originally intended to do later in the week, but we had good weather and were already sort of on our way there.  After lunch at Soda Butte Creek Picnic Area (complete with a Harlequin duck flyby), we drove out of the park and up the pass.

It was a gorgeous day and my group reveled in the spectacular views.  We stopped for numerous landscape opportunities along the way.  Wildlife wasn’t abundant, but we had a couple notable sightings, including distant mountain goats (one of three spots where we’d see goats on this day, none within anything resembling close proximity).  We also enjoyed the company of a very cooperative marmot. 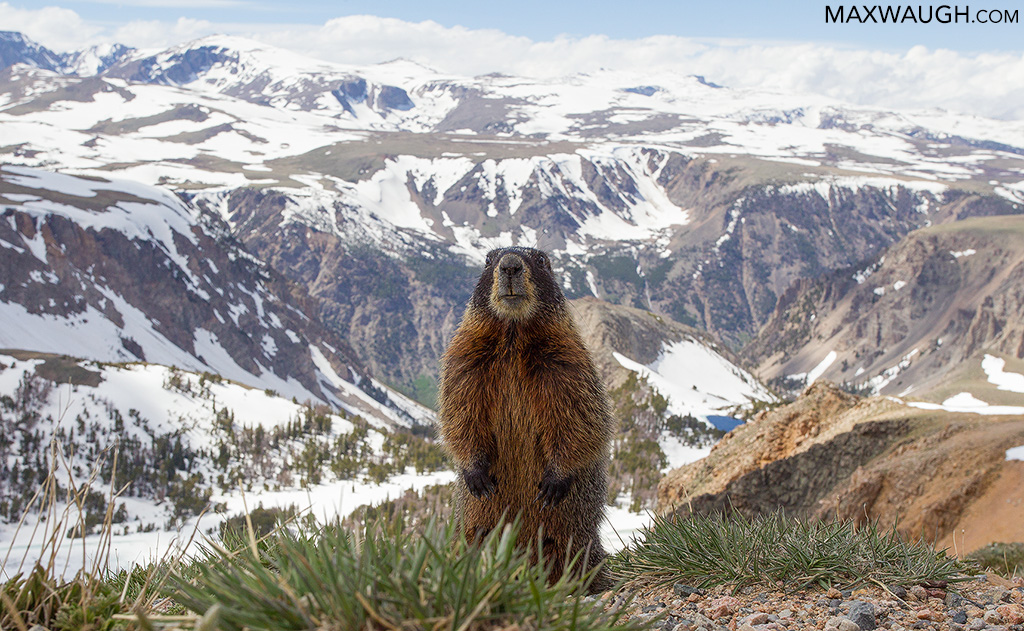 (Remember, this shot was taken outside the park.)

It was worth the trip up, and we made it back down toward Yellowstone just as the afternoon light was hitting its prime.  In Silver Gate, we stopped for a bull moose butt sighting.  After a passerby insisted there was a moose just inside the NE entrance, we departed… and failed to find the other reported moose.  But we soon came across a cinnamon black bear instead.

After the bear shoot, we eventually made it toward the meatier part of Yellowstone.  We stopped at a moose jam at Round Prairie, but the cow and calf were in hiding.  One last check on Tower bears, and then we headed for home.  A long, fifteen hour day on the road, but we made it count!

Today was one of those classic Yellowstone spring days, the kind that is sprinkled with wildlife highlights ranging from the big popular stuff to the smaller, more obscure critters that don’t usually attract much attention but put on a good show.  Our group started jams focused on anything from bears to mustelids to rodents to birds today.

My clients agreed to return to the northeast in the morning.  The black bear with two new cinnamon cubs had finally been seen again (first time in over a week), so I wanted to put in some effort finding her, or any bears for that matter, so my group could get some better photo opportunities with them.  And of course, there was all the rest of the good stuff that could potentially show up for us in that part of the park.

We barely made it past Floating Island Lake before we had our first bear sighting.  This one was different from any I’ve had in Yellowstone: it was a collared black bear.  I can’t recall ever seeing a black bear with a radio collar here, but apparently some trapping was going on back on the Blacktail recently, presumably as part of this new research project.

This looked like a male bear, and he was on a mission.  He marched across the road and disappeared over the north hillside.  We drove further east, where I bypassed some of the usual spots I check first thing in the morning in order to look for the cinnamon cubs.  They weren’t around, so we returned to the Tower/Roosevelt area to look for other bears.  On the Petrified Tree Drive, a Mountain bluebird distracted us momentarily before we drove up to the end of the road.  Where we found three bears.

It was one of the Tower Road families, with a sow and two yearling cubs.  But which one?  Was it Rosie or the angry sow who charges rangers?  Eventually, we got our answer when she sat down behind a tree and I saw the white patch on her chest… meaning it was the “new” Rosie (still new to those of us who spent time around the old Rosie a decade ago).  The bears foraged on a hillside that was slowly starting to light up in morning sunshine.  Yearling cubs aren’t nearly as active as they are in their first year, but they still retain a bit of cuteness. 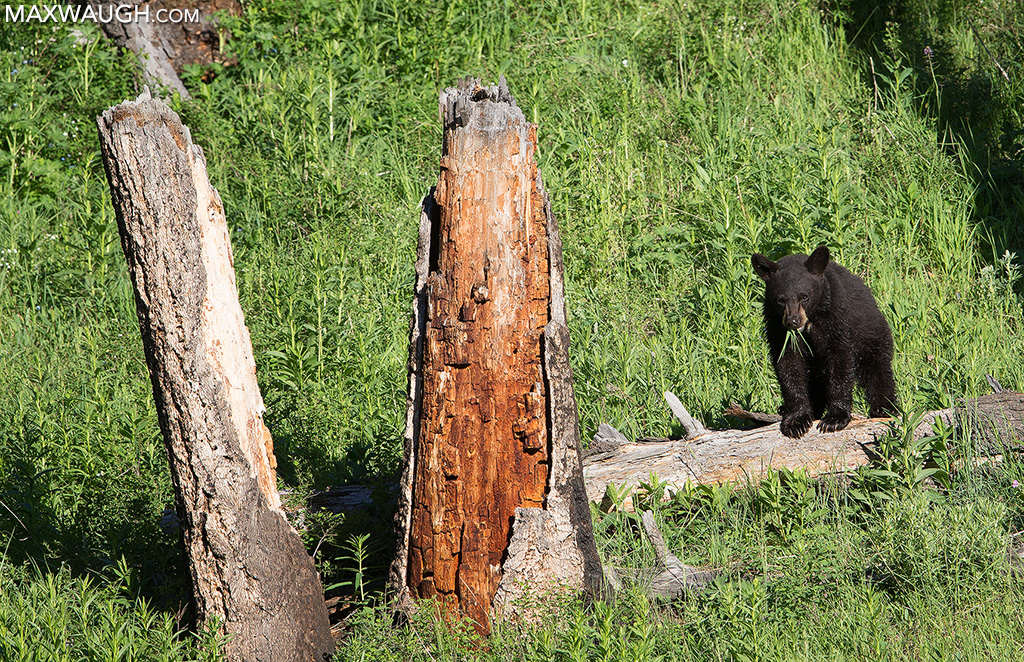 Our bear photo ops were improving as the trip progressed, a good sign.  From there, I drove up the Tower Road.  We stopped so I could show my group the Great horned owl nest at Calcite Springs.  On the way back down the hill, another black bear popped out into the open and crossed behind Rainy Lake before ascending the north hillside.  I thought I spied a collar.  Sure enough, it was our same marching male from earlier in the morning, still on a mission.  He had covered a lot of territory over a short period of time.  Perhaps love is in the air and he’s already in search of a mate (later he was seen near the Yellowstone River bridge, where he spooked a female bear).

We drove out to the east and into the Lamar Valley.  I wanted to check on the new moose family seen in Round Prairie that we had missed thus far.  No dice.  On the way back, I stopped at Soda Butte to see if we could spend time trying to photograph the American cliff swallows that fly in with nesting materials (a.k.a., mud) as they rebuild their summer condos.  This year, for some reason, the swallows had built all their nests on the back side of the butte rather than on the northeast side, so what is normally a good morning shooting opportunity has disappeared.  As a backup plan, we traveled down the road and parked ourselves at the Hitching Post pullout.  More swallows there, but of course these nest under the eaves of the bathrooms in the parking lot.

Not the most scenic photo ops, but it’s perhaps even more challenging to get decent flight shots due to messy angles and backgrounds.  We spent a good twenty or thirty minutes trying to photograph Aves del Baño, and at some point many in the group nailed shots of what is one of Yellowstone’s more difficult flying subjects. 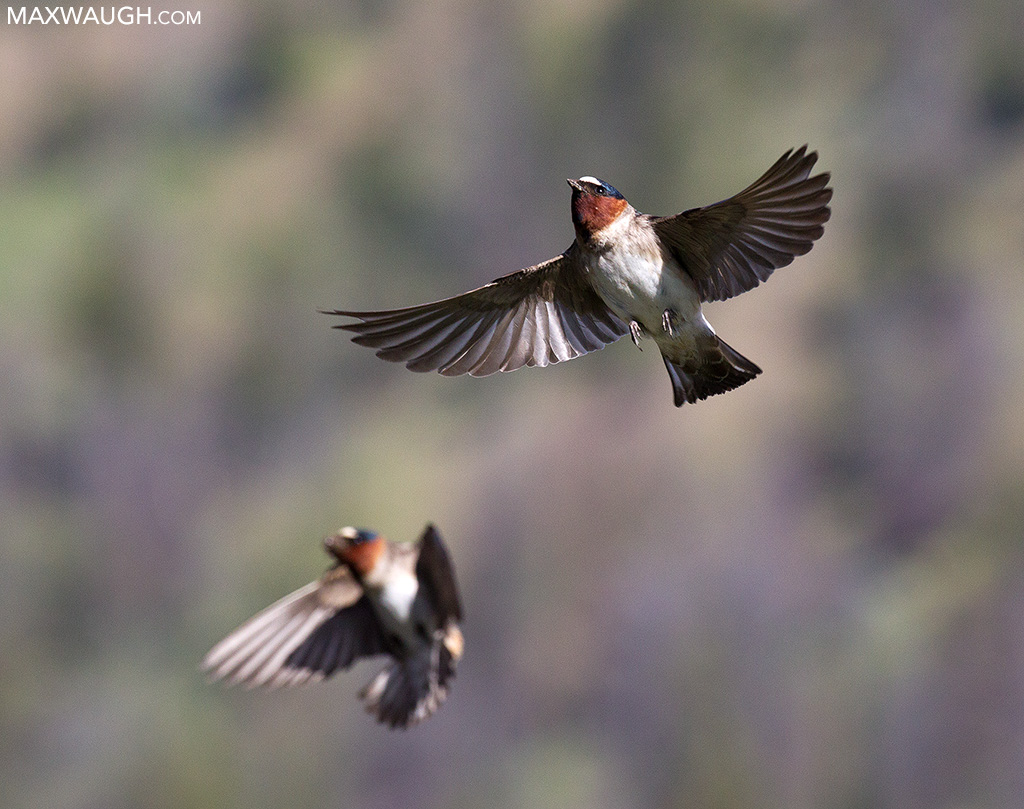 We weren’t quite done with flying birds.  Back at Roosevelt, we started a marmot/bluebird jam.  A family of marmots was scattered over a hillside by the road, and a pair of bluebirds was hauling in nesting materials in the tree above them.  So we could alternate between photographing adorable baby marmots and flying bluebirds.

That occupied more time than you might expect.  Afterward, it was time for lunch.  We picnicked at Slough Creek before driving toward the northeast and Silver Gate.  But we were delayed at Round Prairie… the moose were finally out!

It was the middle of the day, so the light was poor, but we were finally getting views of the bouncy moose calf I’ve been hearing about.  The cow and calf ventured far from their forest hiding place as they both munched on willows.  We had to wait over an hour before they decided to return to their favorite shady spot.  At that point they galloped back through the willows and proceeded to cross a narrow arm of Soda Butte Creek. 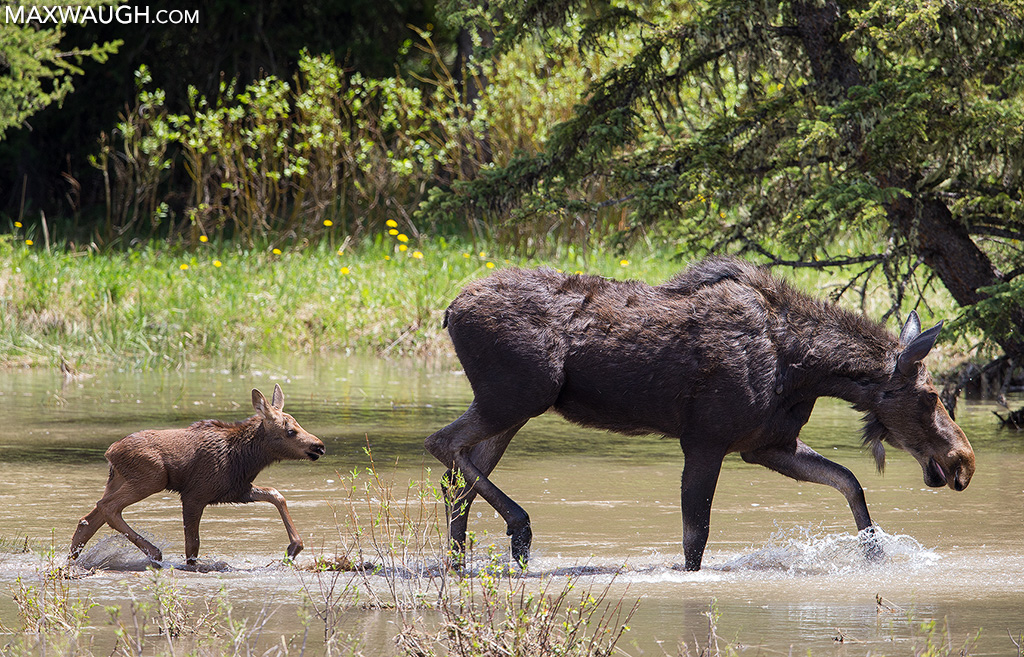 How better to celebrate moose than with a heaping cone of Moose Tracks ice cream?  We hit Silver Gate and the Stop the Car Trading Post for a break and a tasty dessert.

It was already an action-packed day, but there was even more to come.  There were still a few species on our collective wish list for the tour, and we checked two of them off in quick succession.

Arriving in Little America, I spotted two people sitting on a hillside out beyond a pullout as we drove past.  People generally don’t just sit on random dirty, scrubby hillsides for the heck of it here.  Intrigued, I decided to turn around to see if they were watching something (you know, like a badger).

But no, they were, apparently, just sitting around on a dirty, scrubby hillside for the heck of it… completely oblivious to the badger one of my clients spotted out the window. 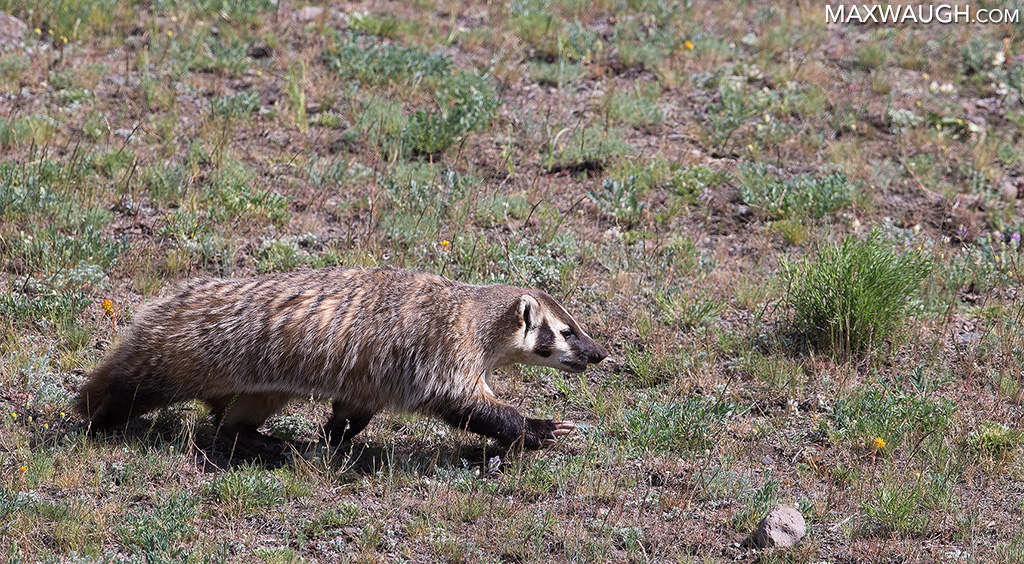 We had a nice shoot with this fellow, the first badger of the tour (and first photos this year for me).  He went uphill, then back downhill and crossed the road near the aspens.  There, he spent some time excavating a hole, disappearing for a few minutes at a time, and eventually come back out to dig himself a pit toilet nearby, which he promptly used before returning to the burrow.

The burgeoning crowd waited a few more minutes and was rewarded, as the badger reappeared and set off to hunt.  We had a few more distant photo ops as he went further and further afield, at which point we let him go.

So we checked the badger off.  What about a fox?  Coming right up…

At the other end of Little America, we entered a fox jam.  Well, we weren’t entirely sure what it was at first, only seeing a number of people surround a small patch of long grass just off the road.  Turned out they were monitoring a fox, not ten feet away and flanked on both sides by tourists.

That was a bit too close for myself and some of the other professional photographers and onlookers present.  I asked my group to hang back so we could let the fox escape the watchful eye of its closest stalkers, and eventually it did give them the slip… but promptly trotted right along the road and past all the other folks who had tried giving it space.  It was impossible at that point to back up into the busy vehicular traffic, so we tried to shift awkwardly away as it headed off through the brush, continuing its afternoon hunt.  A few minutes later, while waiting to see if the fox would bother to reappear, we were distracted by some cheeping ground squirrels. 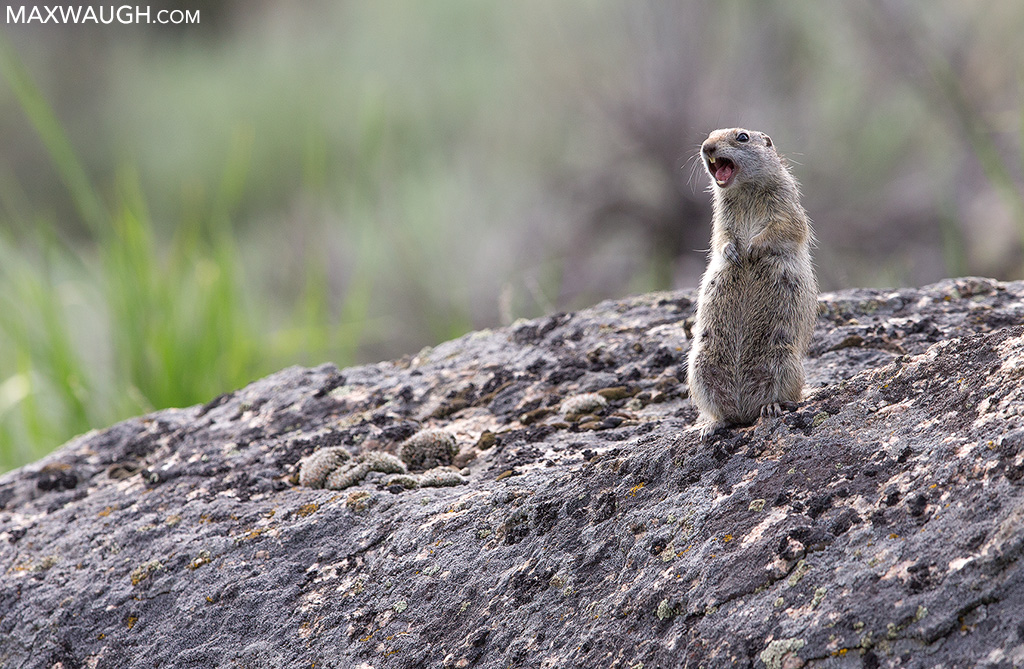 Overall, it was the busiest photo day of my spring adventure so far, and a real winner of a day for the tour group.  We’re looking forward to a very early start tomorrow as we head back south in the morning.