My spring group tour wrapped up the night before, so Friday was spent shuttling clients to Bozeman, followed by a return to Gardiner.  Once I was back in town, I spent some time repacking, catching up on work, and preparing for a one day private tour that was scheduled for Saturday.

My clients on Saturday, Dave and Kathy, were Yellowstone veterans, but had hopes of picking up a few additional tips on wildlife and locations I like to frequent.  Which is perfect, since a single day in the park can be hit or miss if one’s main goal is to pack the day full of photo opportunities.  It all depends on what mood the animals are in.

The weather had gone downhill a bit: cloudier, cooler, windier… and even a bit of rain.  Aside from the wind, I thought this was a good thing.  The previous week had been pretty warm, and I think animals prefer milder temperatures.  So I figured we’d have some good luck.

We started off early in the morning with a black bear grazing at roadside at Phantom Lake.  A collar and bright green ears tags… perhaps the wandering male from a few days back, or was it another unwilling participant in the new black bear study?  Next, we had more bears: Rosie and her two yearlings just below the road that heads down to the Yellowstone River Bridge.  Soon she’ll be kicking them out, so this would be my last sighting of this family together.

Bears are fine, but we were hunting for moose a fair bit.  Didn’t have any luck, even with the additional sightings I’d recently had with moose and calves a couple days prior, but I was able to at least point out some good spots to look for them.  With Kathy and Dave staying on for another week, I expect their odds of some moose sightings will be pretty good.

We scoured the northern road extensively, hitting all points a couple times.  Pika was also on the wish list, so we made a visit to Hellroaring, and, after exercising a bit of patience, one pika finally appeared for us.  It’s always nice when I can prove to my guests that I’m not imagining things. 😉

As we neared the Yellowstone Picnic Area again on our way eastward, I had wanted to pull over to point out some bird nests, but a small crowd waylaid those plans.  The lightly-colored YPA fox was out again (fourth time in five days for me).  Once again, she had to weave through some very close crowds, and we hung back a bit further to give her space as she hunted. 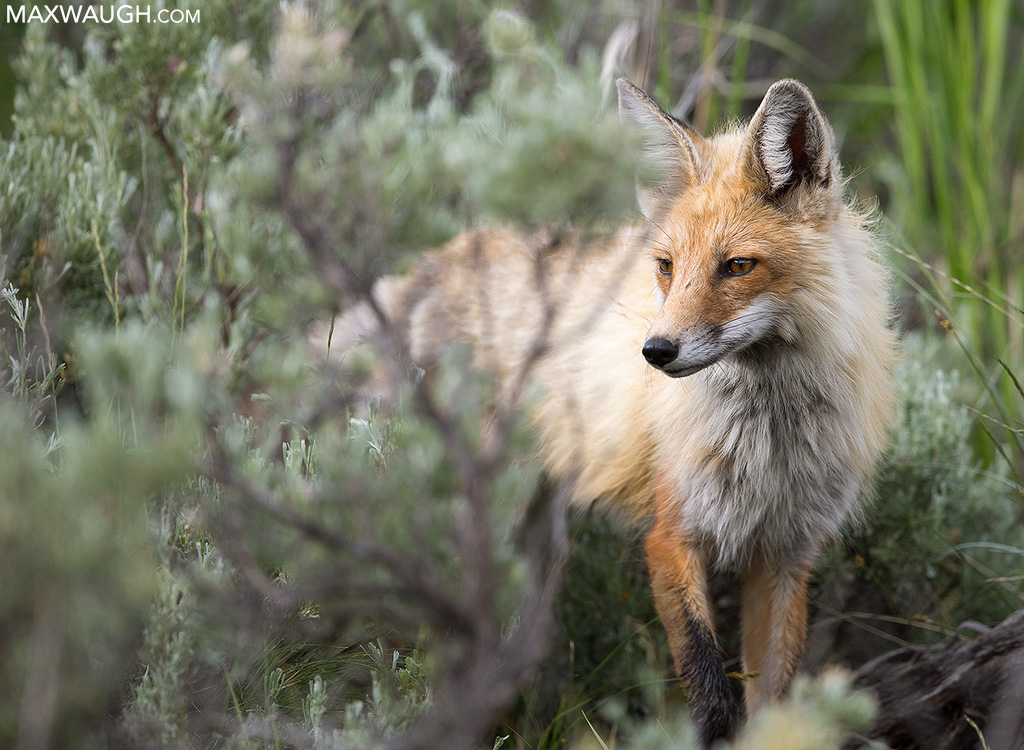 We let her go on her way, but soon we were out of the car again when we spied a pronghorn with a very young fawn.  It still looked a bit wet and unsteady, so it may have only been a day or two old.  The light was pretty harsh at this point, but it’s always a treat to see these cuties at closer-than-normal range. 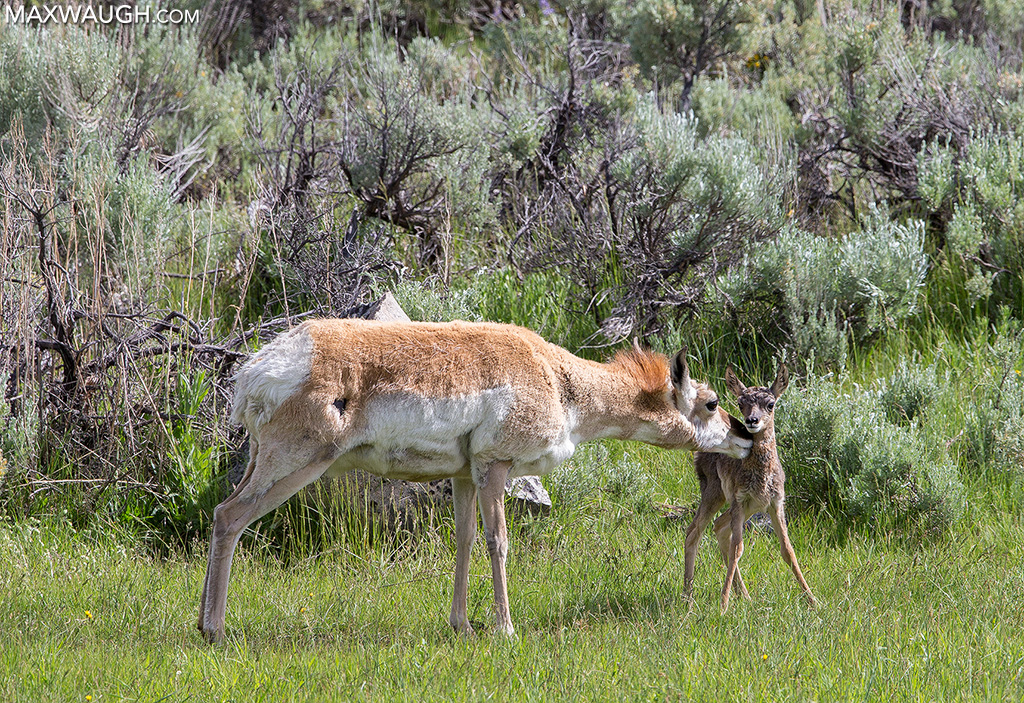 Eventually, we did make it to the bird nesting spots… flickers, wrens, swallows, bluebirds, tanagers and flycatchers all came and went at one point.  Then we were off to the northeast.  My clients had agreed to join me on a bit of an adventure outside the park, where I was following up on some leads beyond the northeast gate.  On our way out, we passed Round Prairie.  People had gathered, but not for the moose there.  A black bear was out on the southwest end of the meadow.  This is where the cow and calf had been hanging out, so I assumed it might force the moose to pick up and leave (sounds like the bear did indeed spook the moose later).

We did eventually find the spots we were seeking outside the park, though we never had any photo ops.  Nonetheless, it was a fun scavenger hunt, and it was nice to see that Kathy and Dave were game for some semi-aimless exploration (which is sometimes the best kind!).

Our afternoon drive back in was fairly mild, though it was enhanced by giant milkshakes from the Stop the Car Trading Post in Silver Gate.  Our second and third coyotes of the day appeared not far from the road, rounding out the day’s sightings.

Ultimately, we had fun and my clients came away with a better understanding of some of the hidden secrets the northern range has to offer, which is always one of my goals going into any guided tour.

That was the end of the line for me, as I departed for home immediately (one more badger sighting along highway 89 for good measure).  Thanks to all of you for following my reports these last couple weeks, and big thanks again to all of my spring clients for joining in on the fun!

If you are interesting in joining me on a future spring Yellowstone tour, my 2018 tour has just filled up!  You may join me in 2019, or book a private tour.  Private tours are available on a limited basis at certain times of year.  Check my latest tour listings here for both Yellowstone trips and my other joint adventures around the globe.