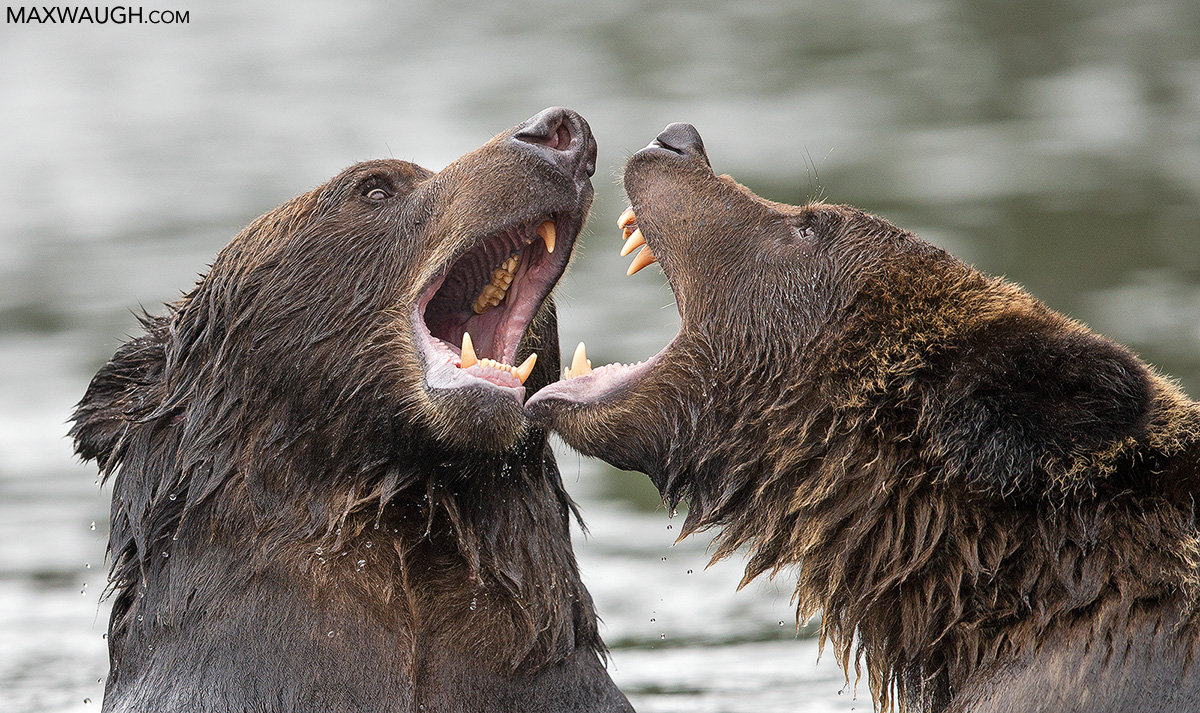 Last September during the second of my Great Bear Rainforest tours, I enjoyed the best photo encounter I’ve ever had during my many trips to British Columbia.  Yes, the highlight of a Great Bear trip was provided by bears, but this isn’t always a given.  Prior to this trip, my favorite wildlife encounters in BC involved whales or wolves.  There are a lot of fascinating species in this region.  Though I had seen plenty of bears, including the rare and beautiful spirit bear, grizzly bears provided the highlight of this trip.

If you saw my Best of 2016 photo collection, you’ll recognize the two bears above.  But I wanted to share a few more photos and tell a bit more about the wonderful moment they shared with us.

It’s important to note that I’m not a “bear guy.”  Bears are, understandably, a favorite animal of many of my fellow guides and photographers.  My partners for these BC tours adore their grizzly bears and are fierce advocates for their protection (grizzly trophy hunting is still allowed in the province, in spite of strenuous objection from the First Nations tribes and other wildlife lovers).  Grizzlies are also a favorite of many Yellowstone-based photographers I know.  Though I’m happy to photograph them, I would typically lean toward a wild cat, or wolf… even an owl, given a choice.  But bears—especially playful cubs—have provided a number of highlights during my career.

In this case, the active and playful pair was anything but small, cute or cublike.  These were adult bears… perhaps not fully grown, but hefty enough to look intimidating and command respect.  We spotted the pair among a great many grizzlies that were foraging for spawning salmon at a rainforest inlet.  After we piled into our Zodiac (a small, motorized watercraft), our captain, Eric, slowly took us upriver in order to get a better view of the some of the bears that had come to the water. 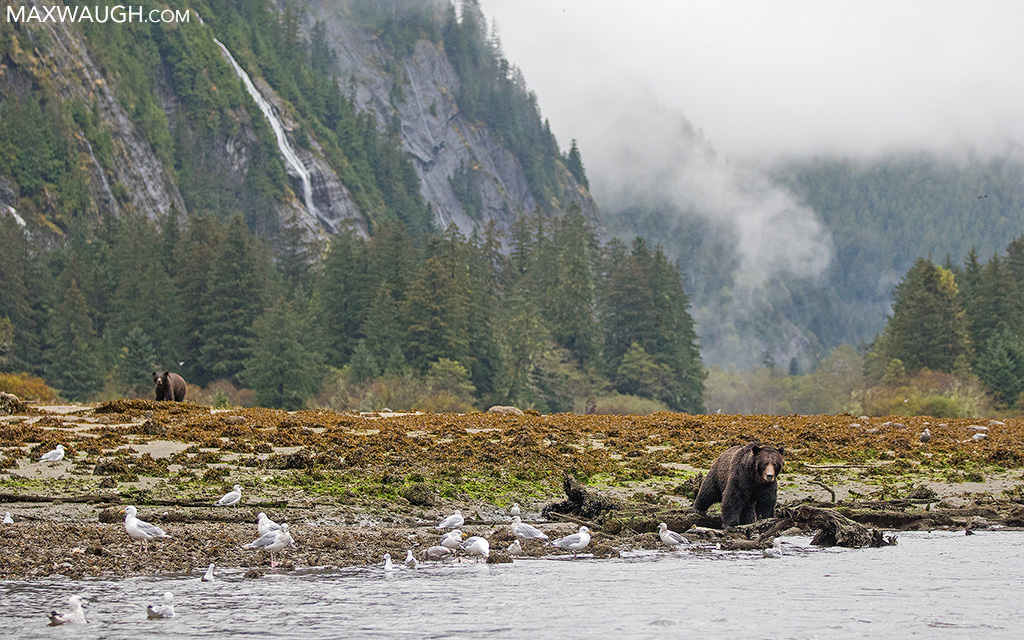 By this point many of the salmon had finished spawning and had died, so the bears (and eagles and gulls) were finding easy pickings among the washed up fish carcasses on shore and at the bottom of the river bed. 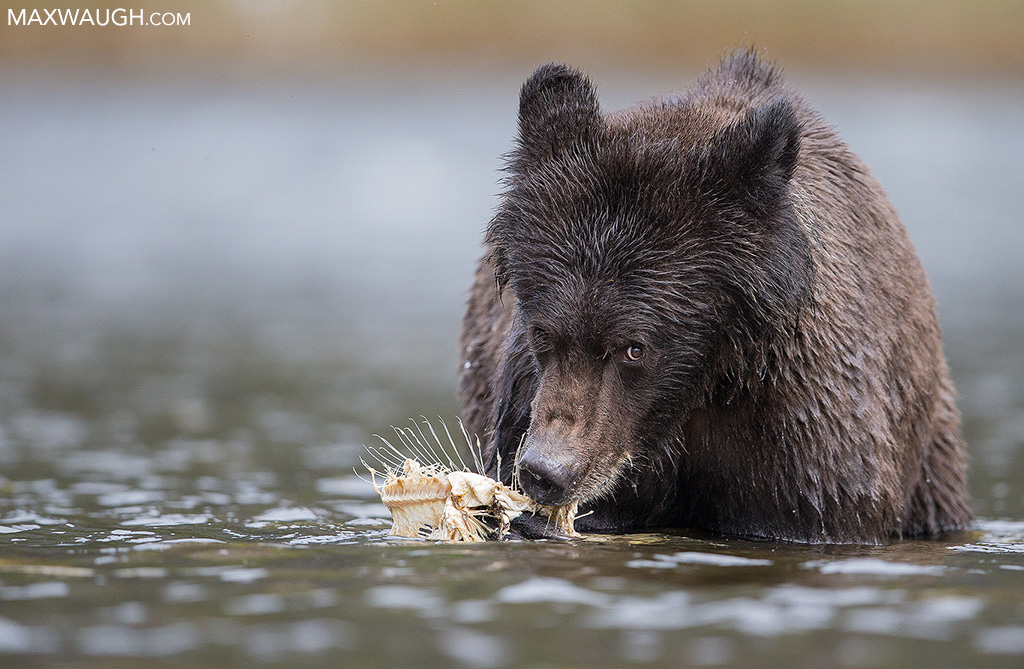 Generally, the bears kept to themselves.  Younger, smaller bears gave bigger bears wide berths and ceded the best hunting and scavenging spots to them.  Sows with cubs were shy and refused to approach the busiest parts of the inlet, instead moving upstream.  But on the small peninsula to our right, we saw one big bear tailing another one. 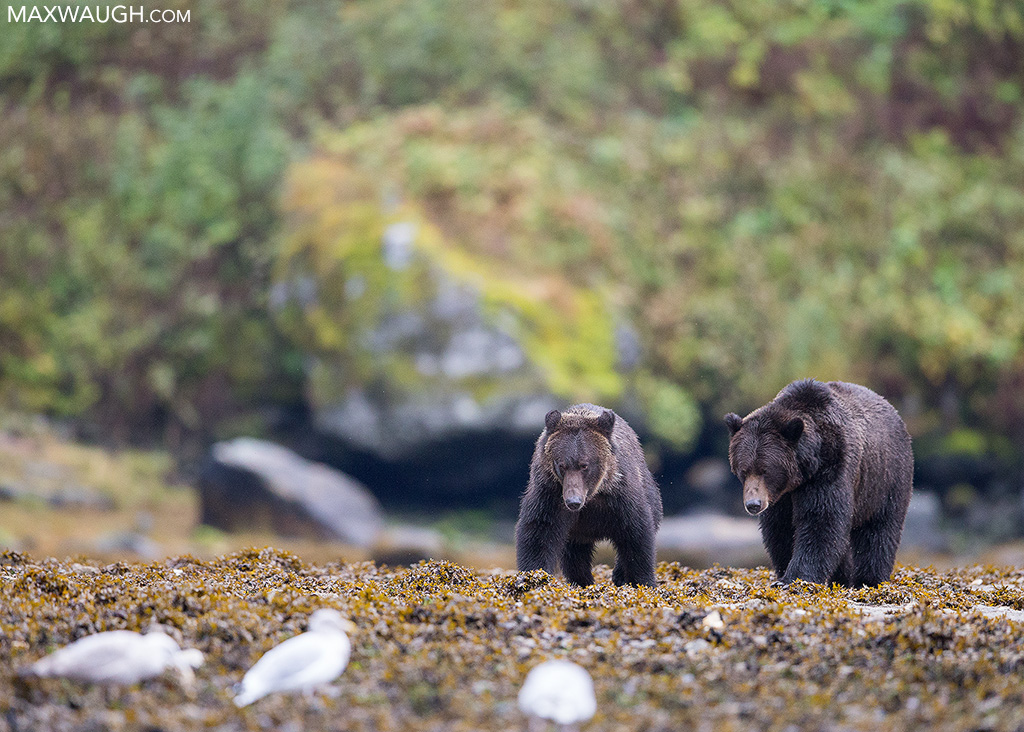 As the pursuer approached, the second bear turned, sized it up and quickly sounded a warning.

At this point the obvious question was whether this there were hints of romance in this encounter (yes, even amidst all the spit and yelling).  It wasn’t even close to mating season—that’s usually in the spring—but the larger bear sure seemed obsessed with its quarry.  Notice I say “its.”  Though it was fairly large and probably a male, it wasn’t a truly massive grizzly, and the odd timing didn’t tell us that this was for sure a boar going after a sow.  They could have been siblings.  Regardless, the aggressor didn’t give up.  Soon, the bears were facing off again. 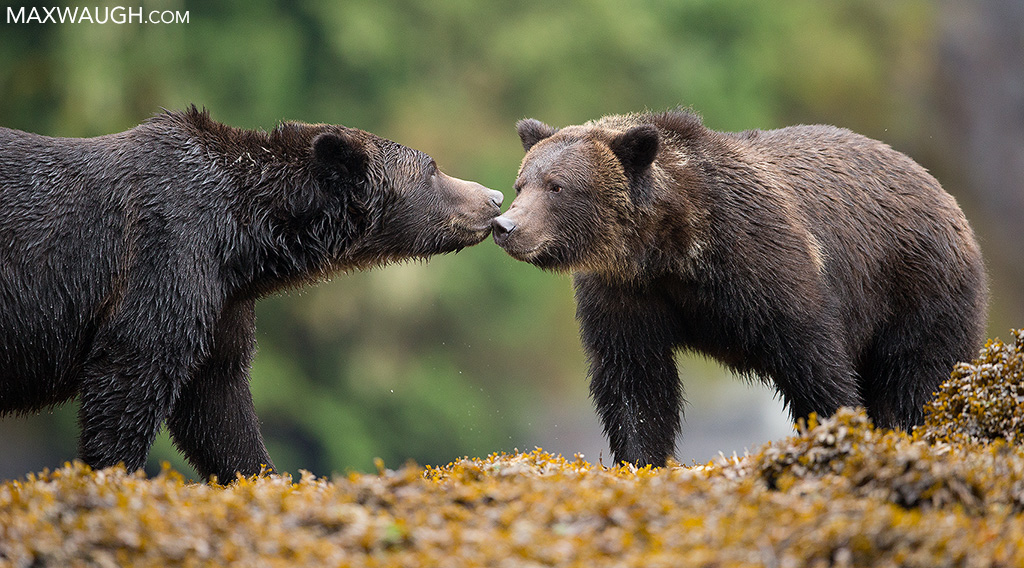 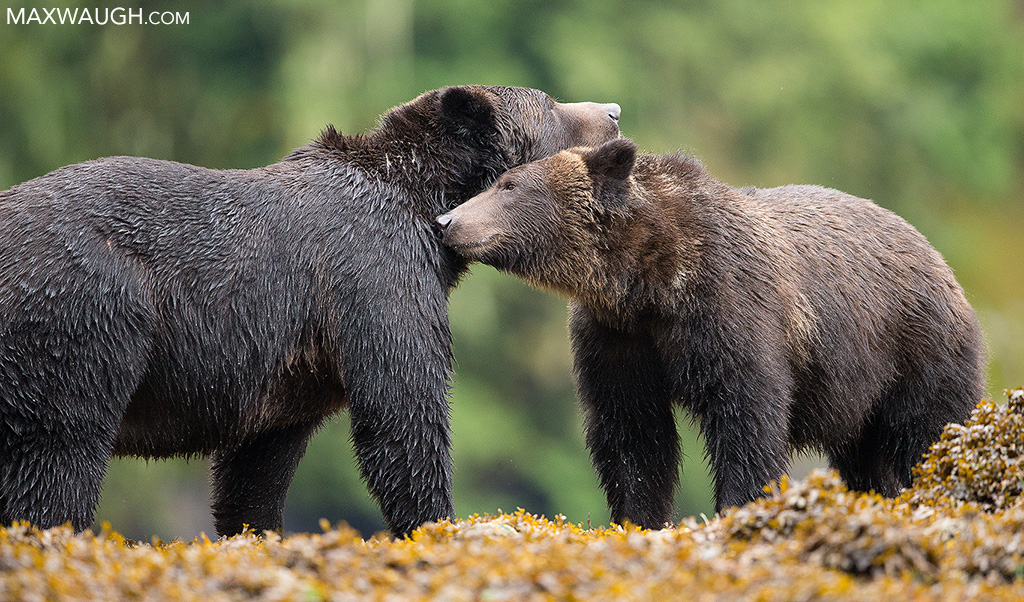 This second meeting seemed a bit more amiable.  A fair bit of sniffing occurred, and the smaller bear didn’t exactly run away when it was being followed. 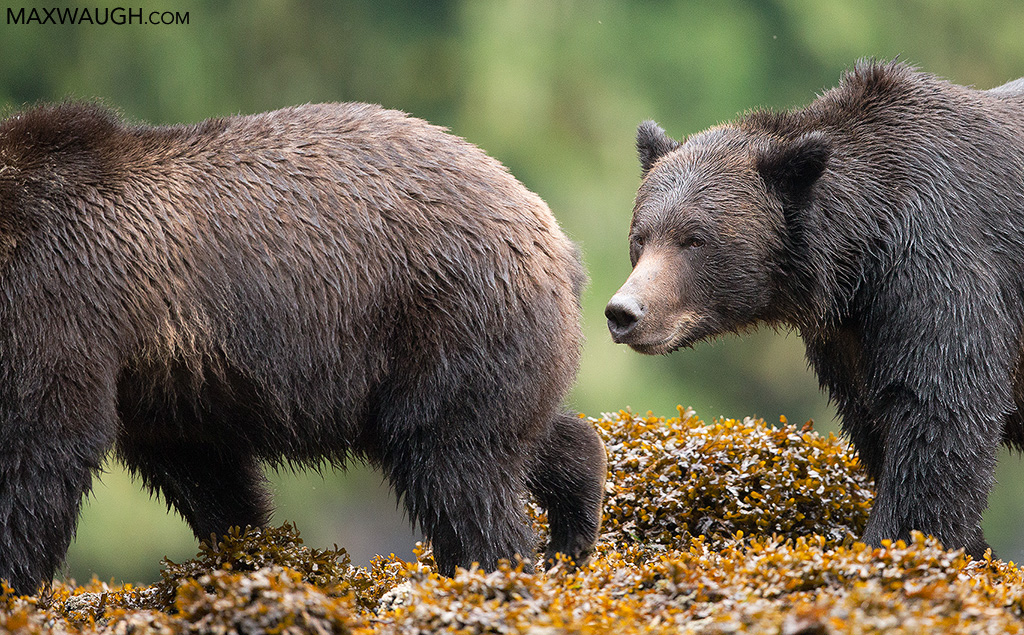 Then things changed, and it finally seemed to get tired of the attention.  Smack! 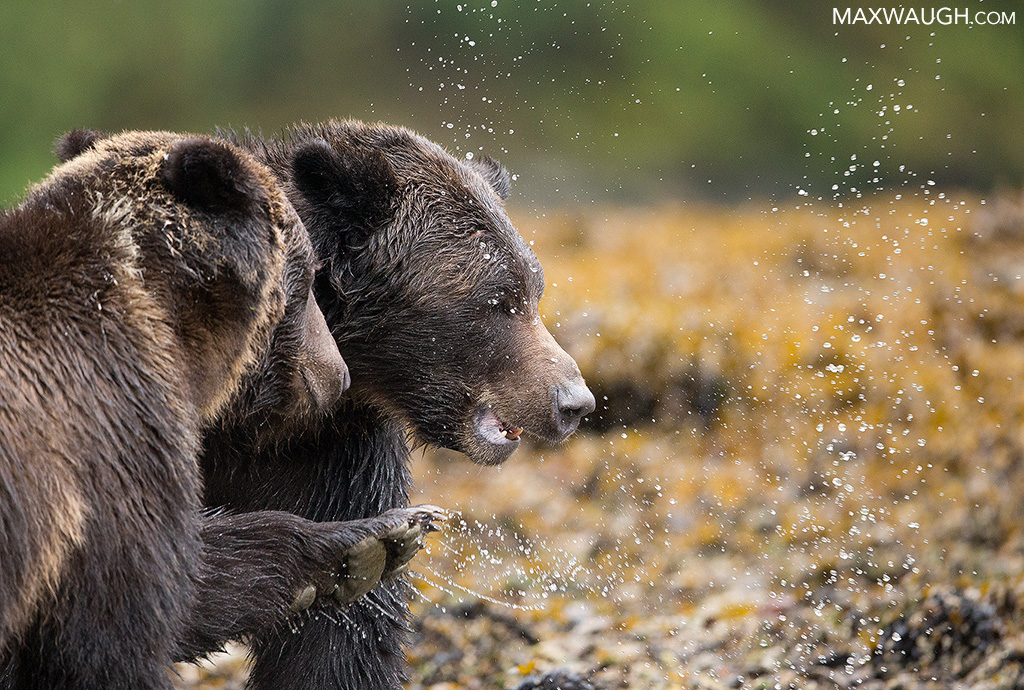 That was followed by the baring of more teeth. 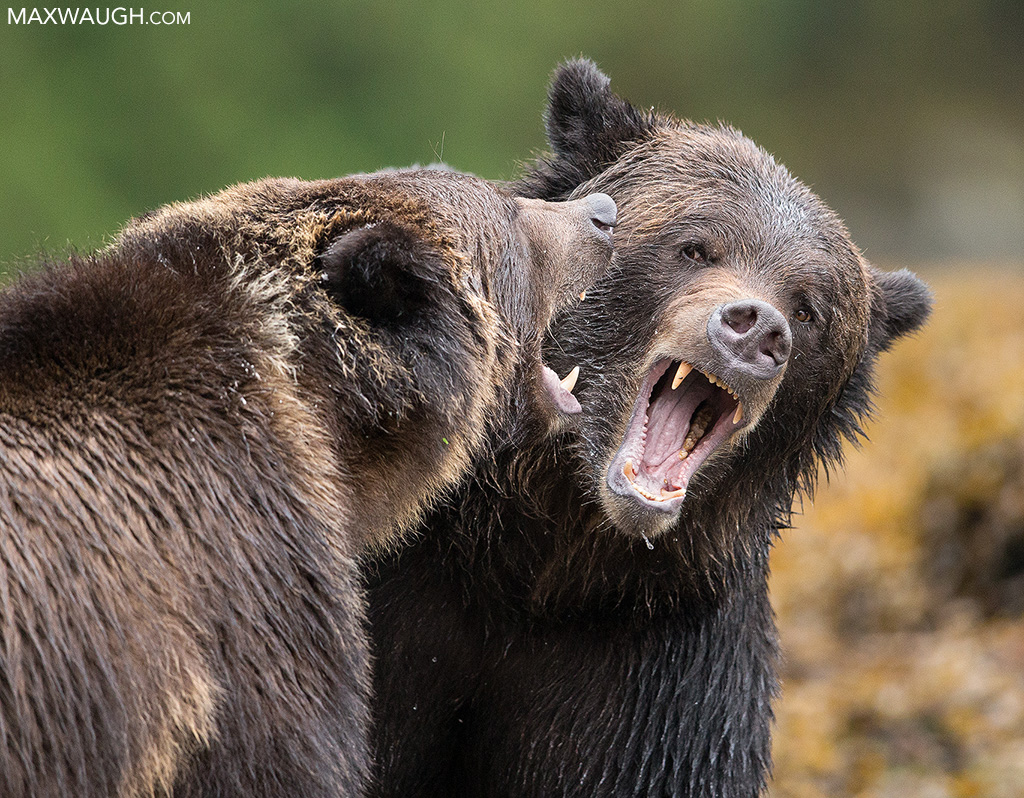 The pursuit eventually reached the river, where things finally came to a head.  It was at this point that the smaller bear went on the offensive, biting, smacking and grabbing at its larger foe with gusto.  The big bear was playing defense from that point on. 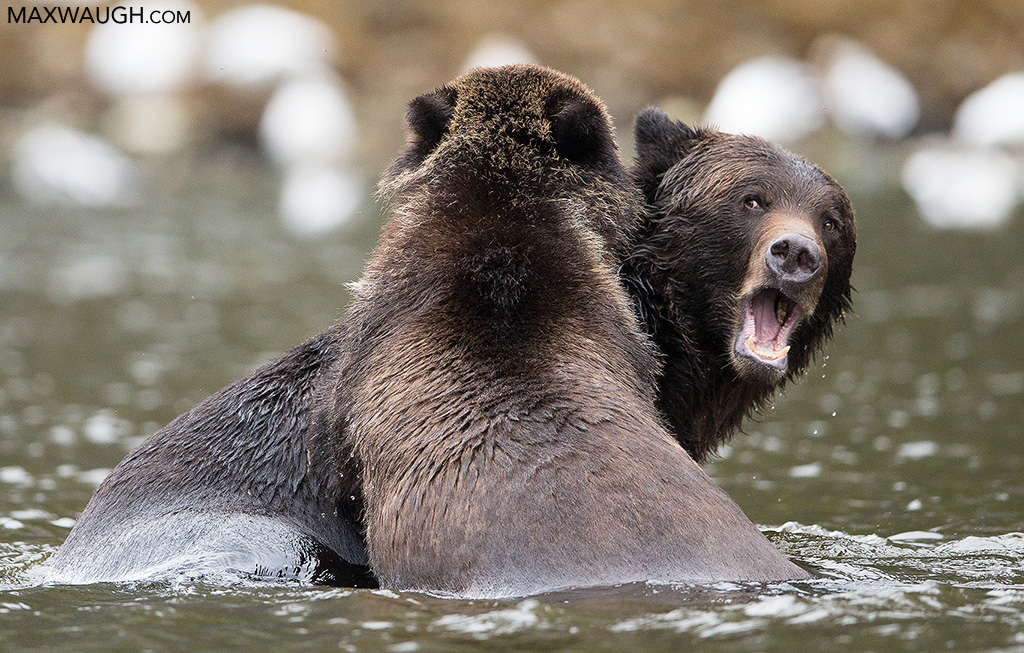 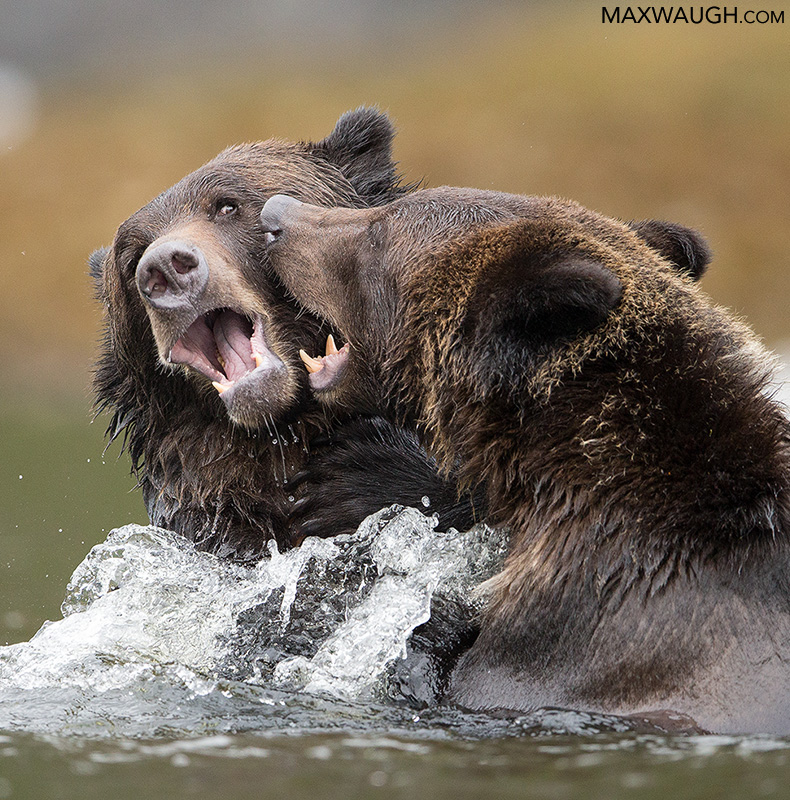 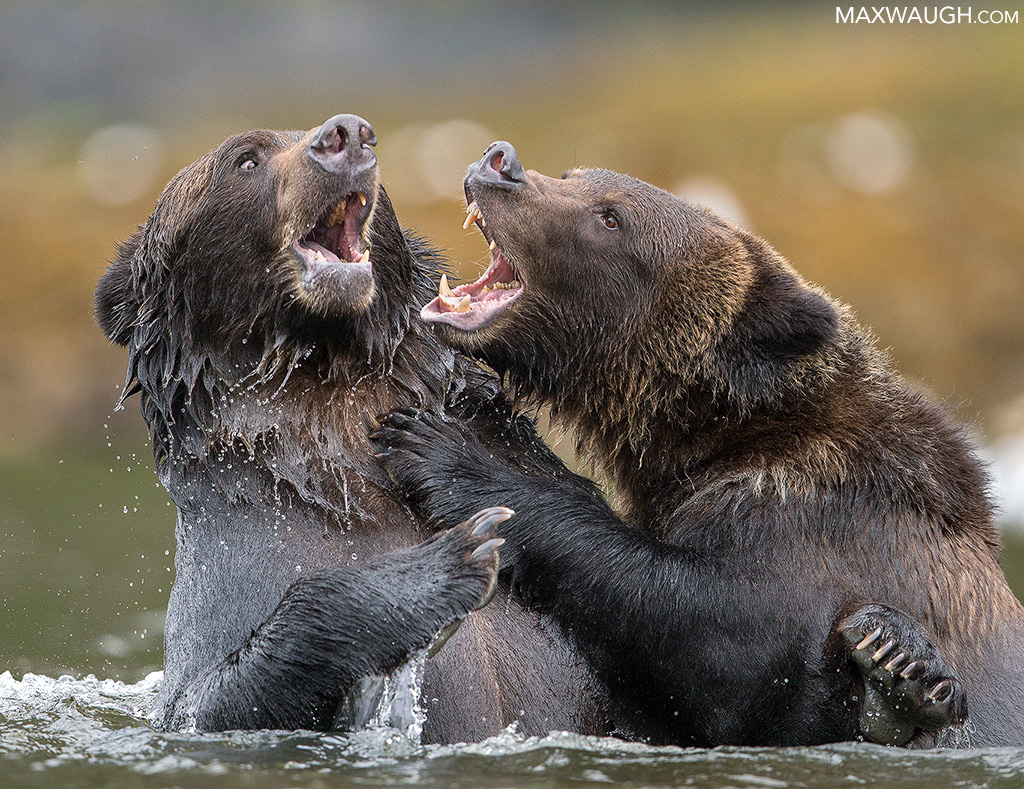 Be careful what you wish for… you could get a blast of fish breath in your face! 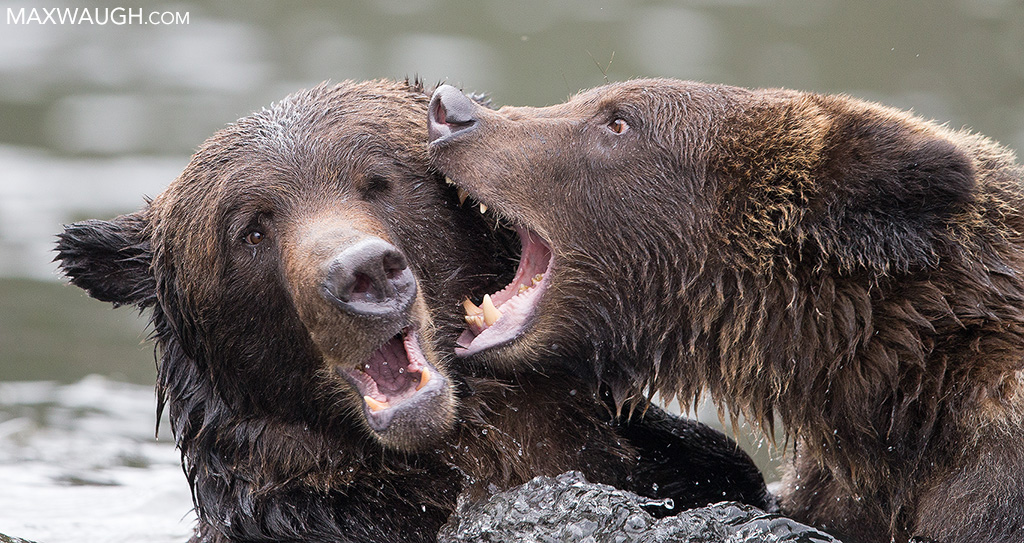 The entire time, Captain Eric kept us steady in the Zodiac in the middle of the river.  He had to keep the motor running, else the current push us back out into the bay, so we were essentially floating in place as the bears proceeded to go at it.  By the way, this was all happening only 25 yards away.  It was incredible! 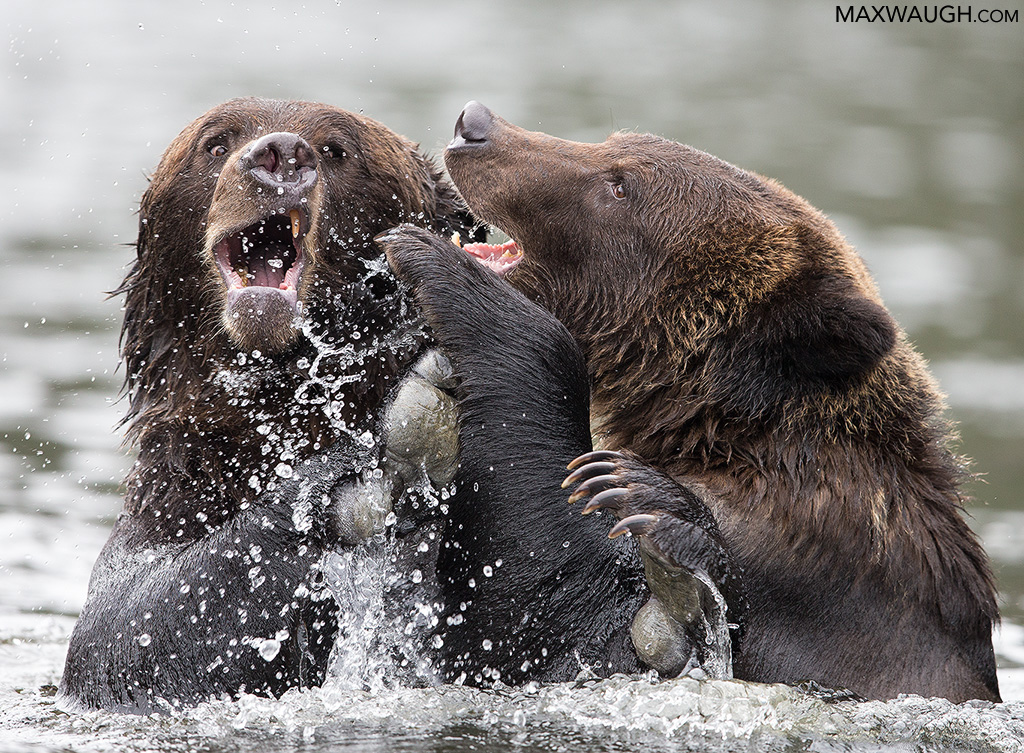 There were some serious bites and blows raining down, but it never seemed like this was a truly fierce battle, lending credence to the notion that this may have either been some heavy-handed flirtation or just a play fight between siblings.  Sometimes, they just hugged it out. 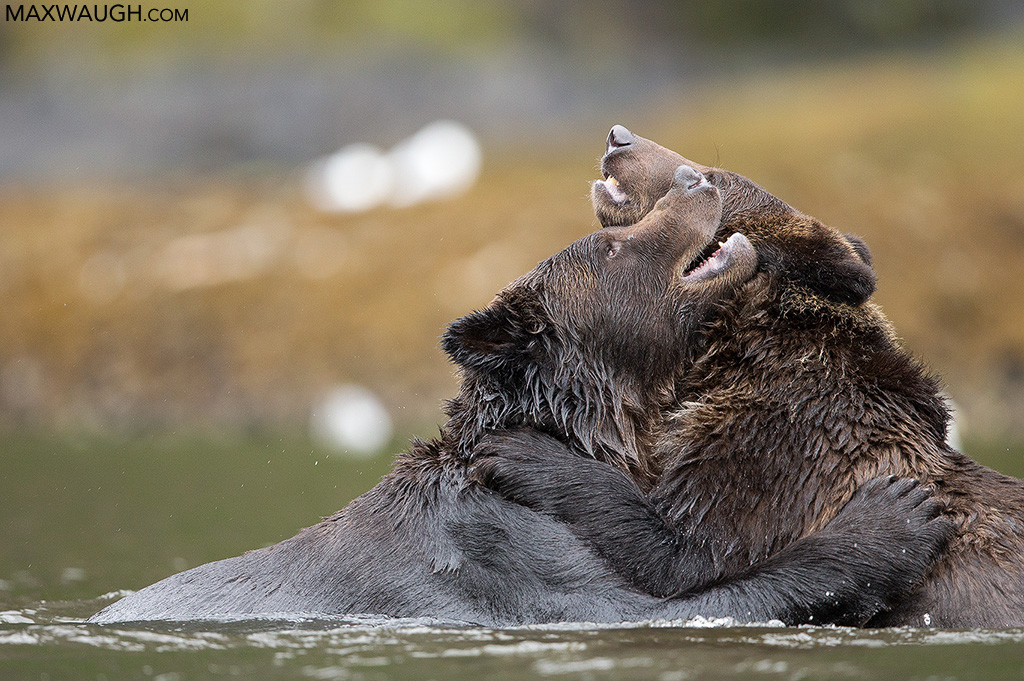 Perhaps they were brothers, practicing on each other in preparation for taking on other big males the following spring.  Regardless, it was incredible to witness at such close range and at eye level. 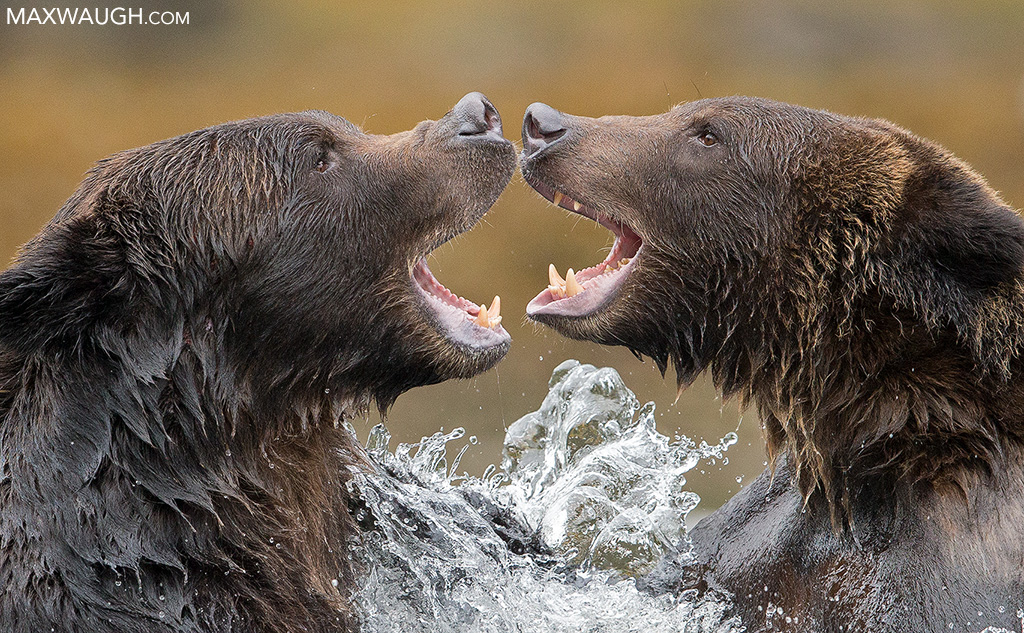 At one point, we just stopped shooting and sat to watch and listen to the combatants.  Snorts, huffs and slaps echoed across the inlet. 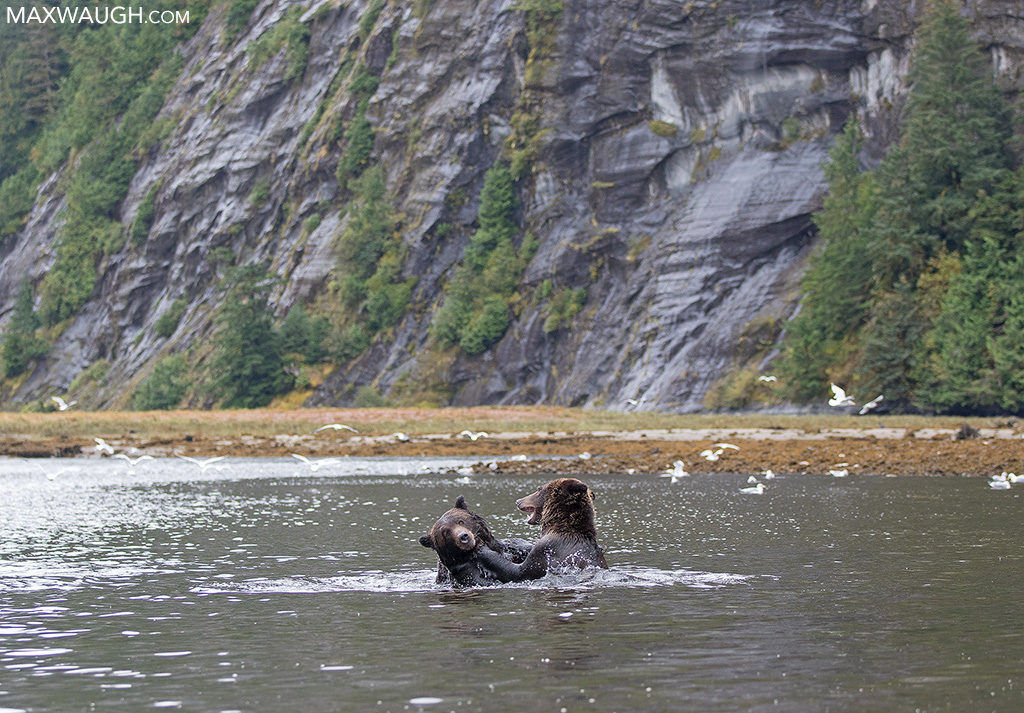 After a minute, we were back snapping away.

Believe it or not, we quit before they did.  We had to get back to the boat for breakfast.  While we ate, we could see the two from our perch… still in the river, still battling it out.  They must have gone like that for three straight hours!  By the way, we were the only ones who saw all this transpire.  The one other larger tour group in the area had gone further upriver and stationed themselves on shore, so they missed the entire thing while standing around in the rain.

It ended up being the best photo opportunity I’ve ever had in the Great Bear Rainforest, and made me appreciate grizzly bears just a little more. 😉 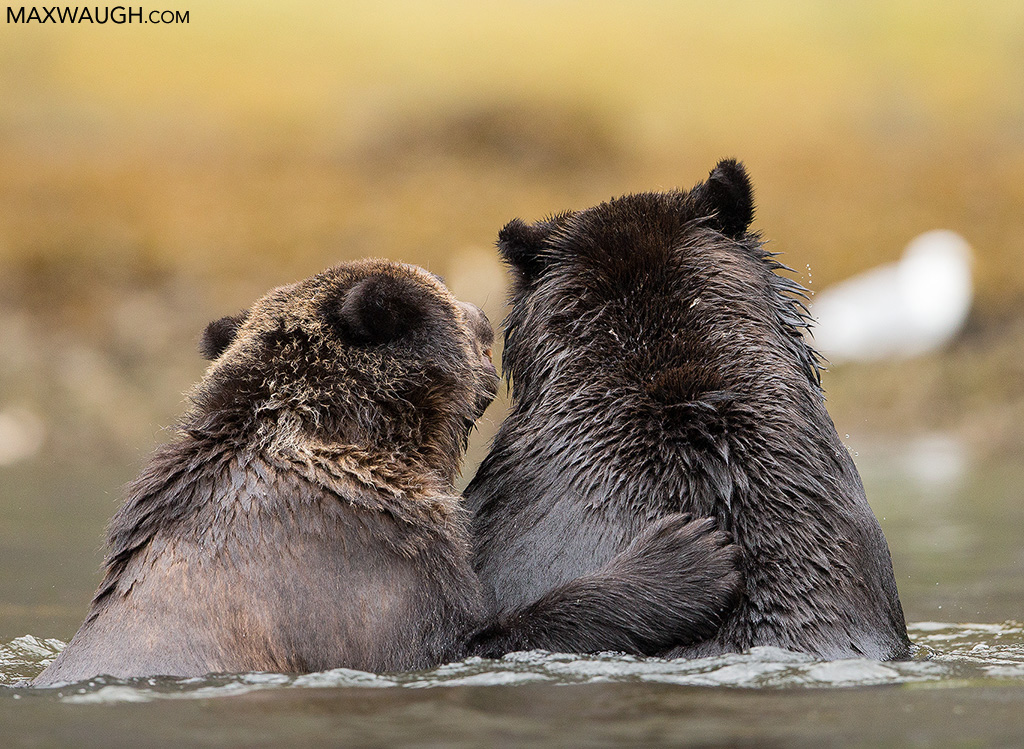 See more photos of these and other bears from my 2016 Great Bear Rainforest trip here.

If you are interested in joining me on a future Great Bear Rainforest tour, my 2019 trip is currently full, but a spot or two may open up.  Learn more and get on the waiting list here.