A couple weeks ago, I published my new gallery of bird photos from Brazil.  Now it’s time for the main course!

This trip was scheduled so I could scout western Brazil, and especially the Pantanal, to see if it would make sense as a photo tour destination.  The Pantanal has become a must-see destination for wildlife photographers for one main reason: jaguars!  It’s the best place in the world to see the largest feline in the Americas, which also happened to be one of the only remaining big cats (along with the clouded leopard) that I had not seen in the wild.

Well, there was no problem finding jaguars (see below!), but this region is also home to a lot of other species.  We had numerous encounters with giant river otters, and we saw anteaters, armadillos and even an ocelot.  There were some nice reptile encounters as well.

See the full gallery of 141 images here.  A short preview is below. 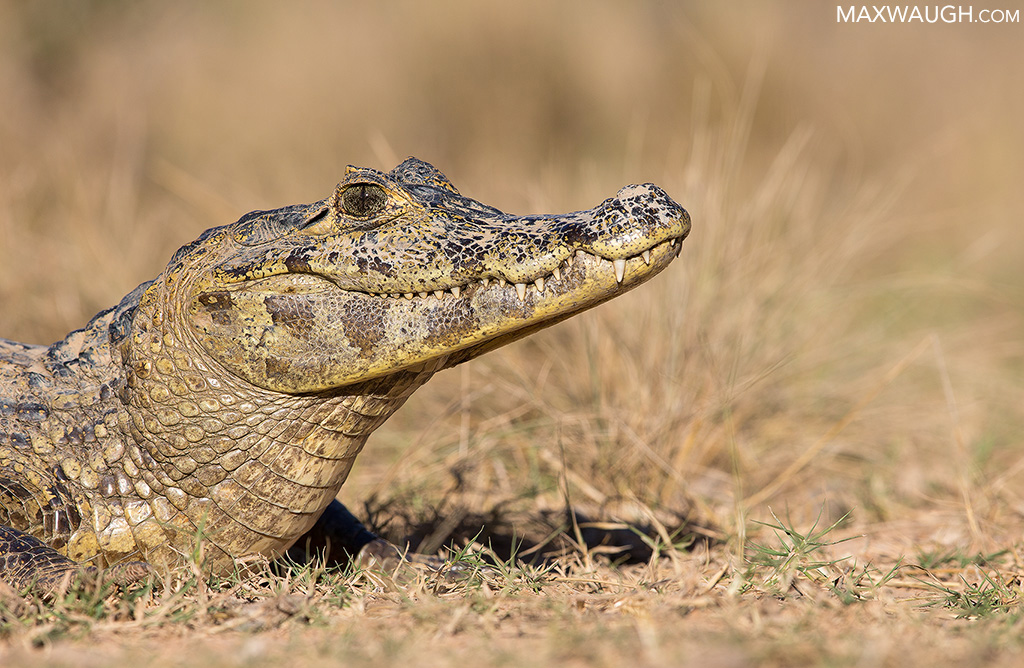 We saw hundreds, if not thousands, of yacare caimans in the Pantanal. 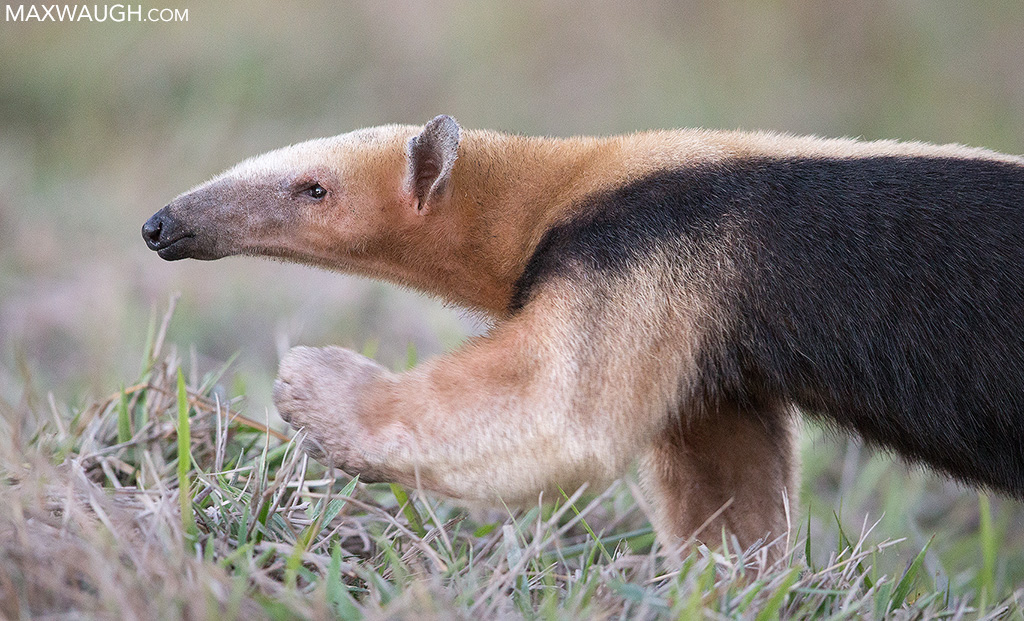 It was exciting to see the Southern tamandua for the first time after photographing its northern cousin in Costa Rica many times over the years. 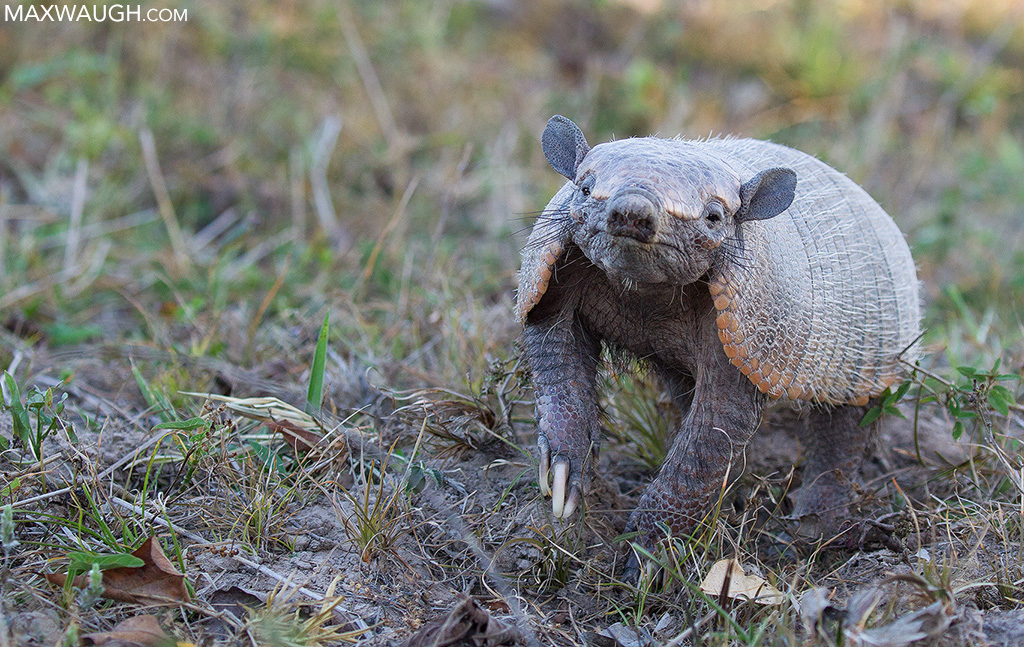 The six-banded armadillo is also known as the yellow armadillo. We saw several of them chasing each other about during what must have been mating season. 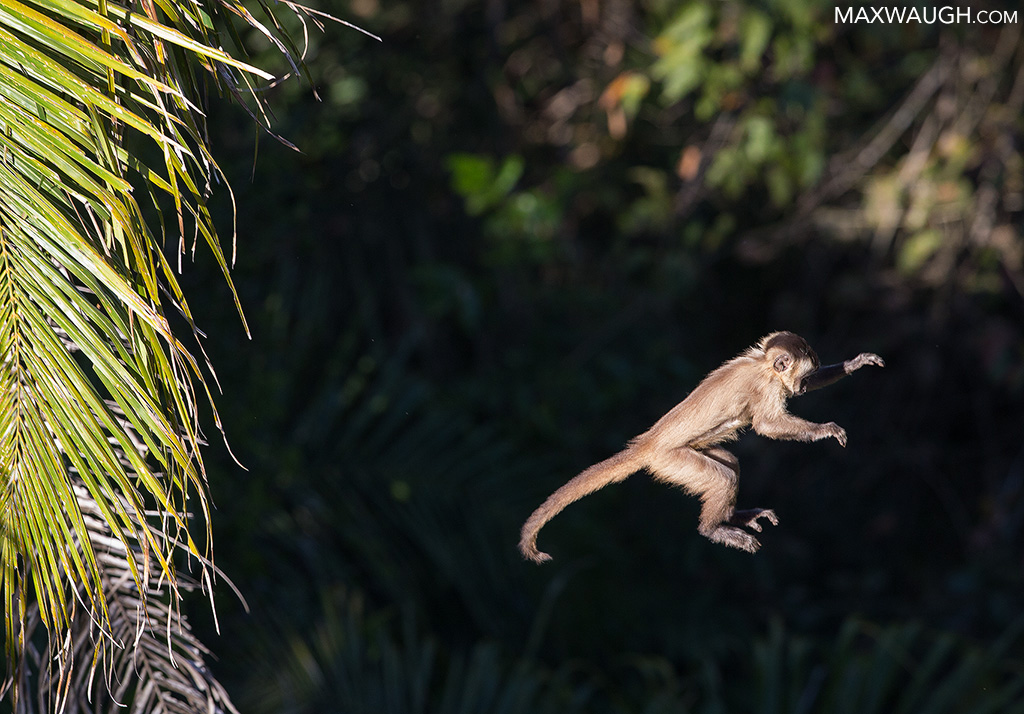 The most common monkey species seen in the Pantanal was the tufted, or brown capuchin. Here, one leaps between palm trees. 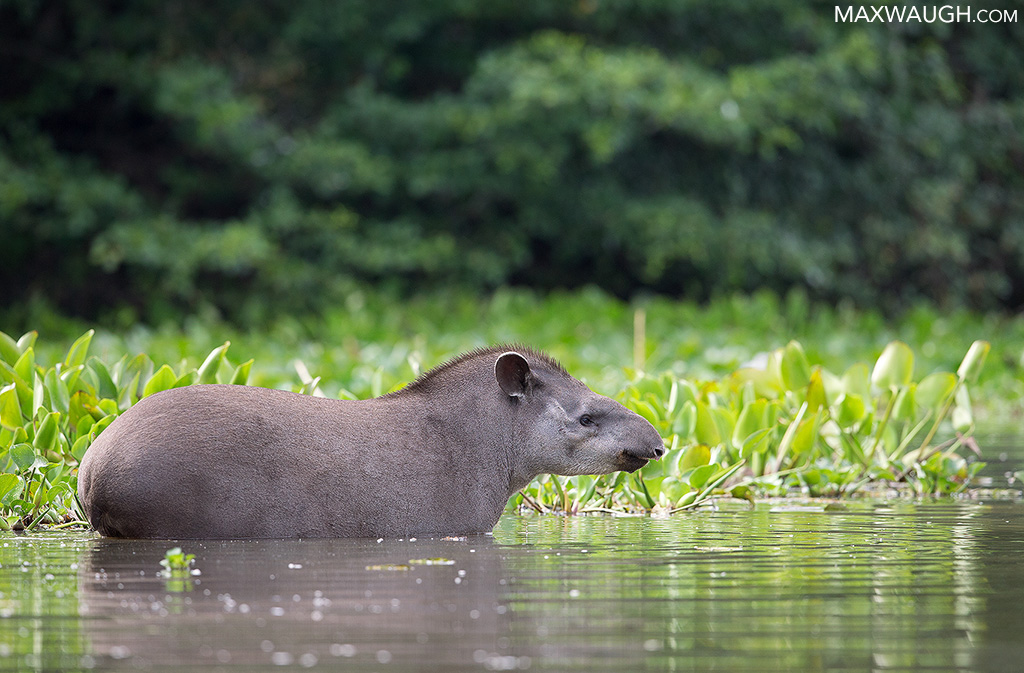 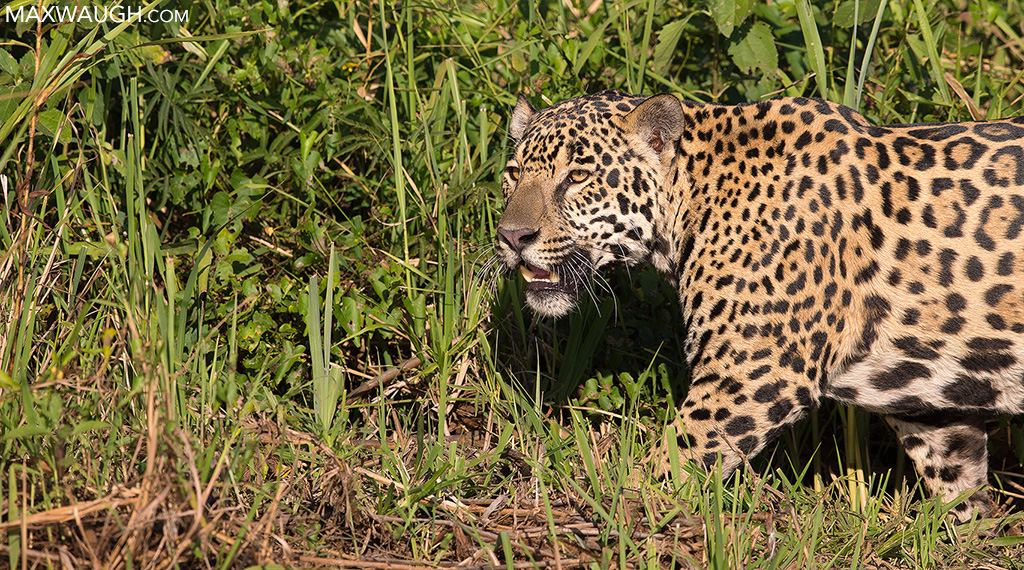 This female jaguar put on a nice show for us on our first day in the southern Pantanal, hunting along the river in late afternoon light. 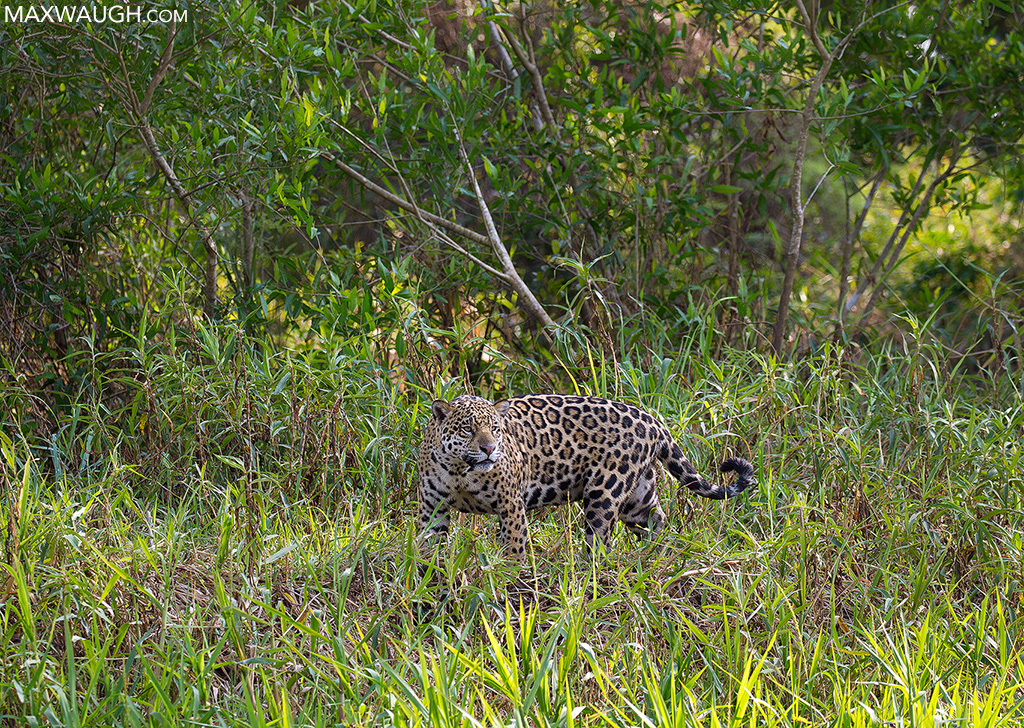 We were fortunate to see multiple jaguars nearly every time we went out on the river. 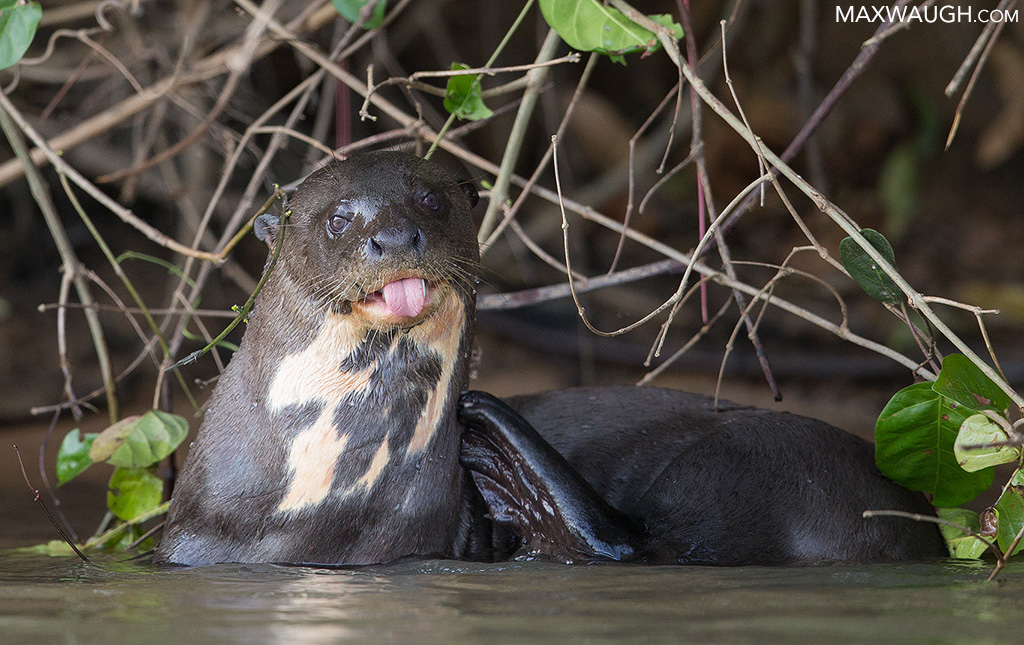 In the Pantanal we had several opportunities to photograph giant river otters. The markings on each otter’s neck are unique and can be used by researchers to identify individuals. 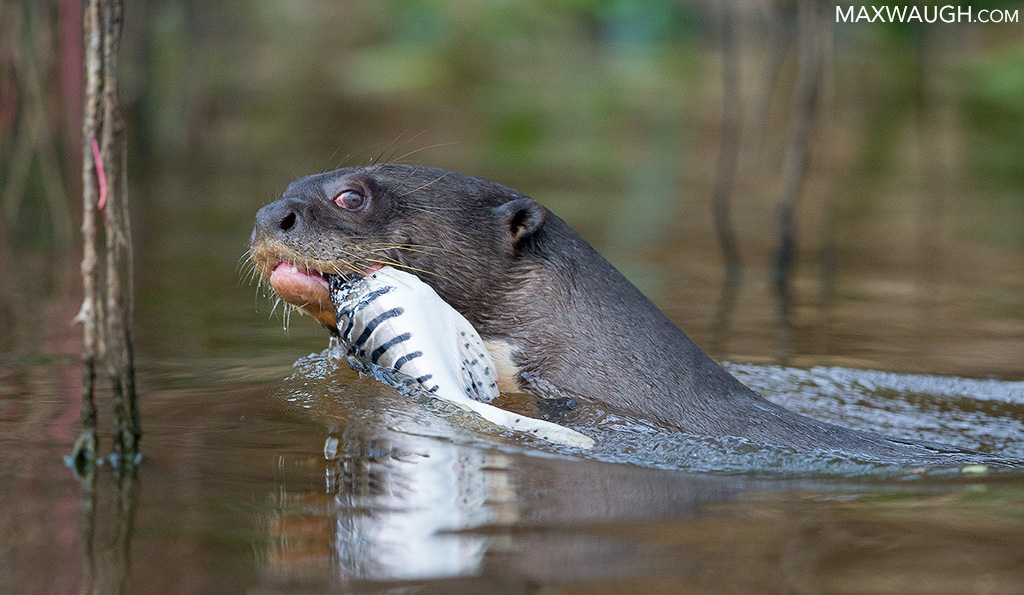 Giant otters are truly large animals, so they have to catch a lot of fish! 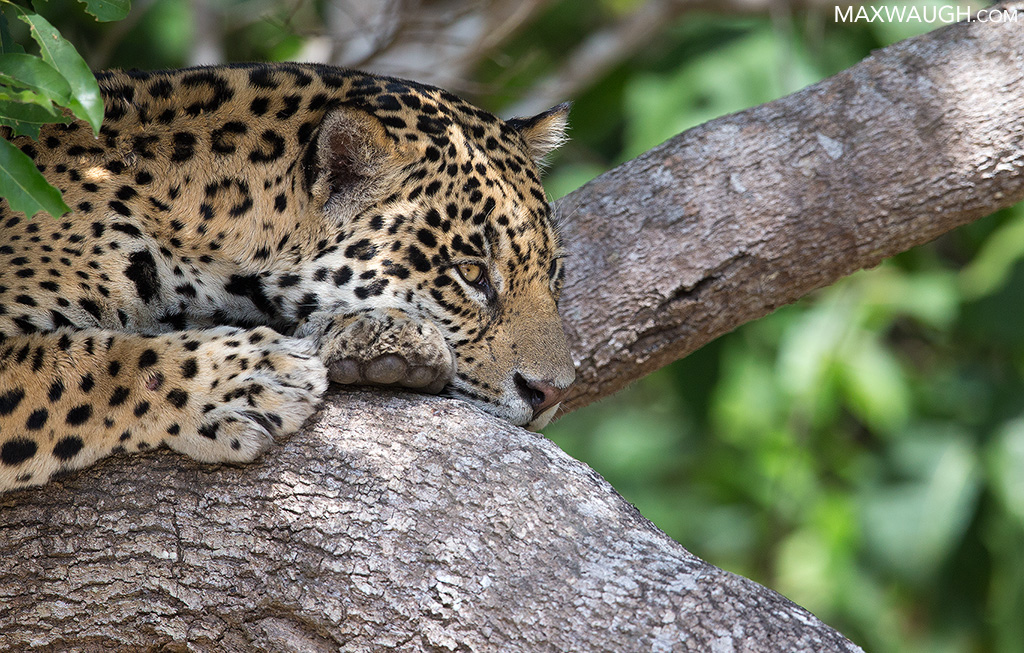 We saw lots of interesting jaguar behavior during this trip, including tree-climbing (a rare sight in the Pantanal), hunting, socializing with other cats and even swimming. 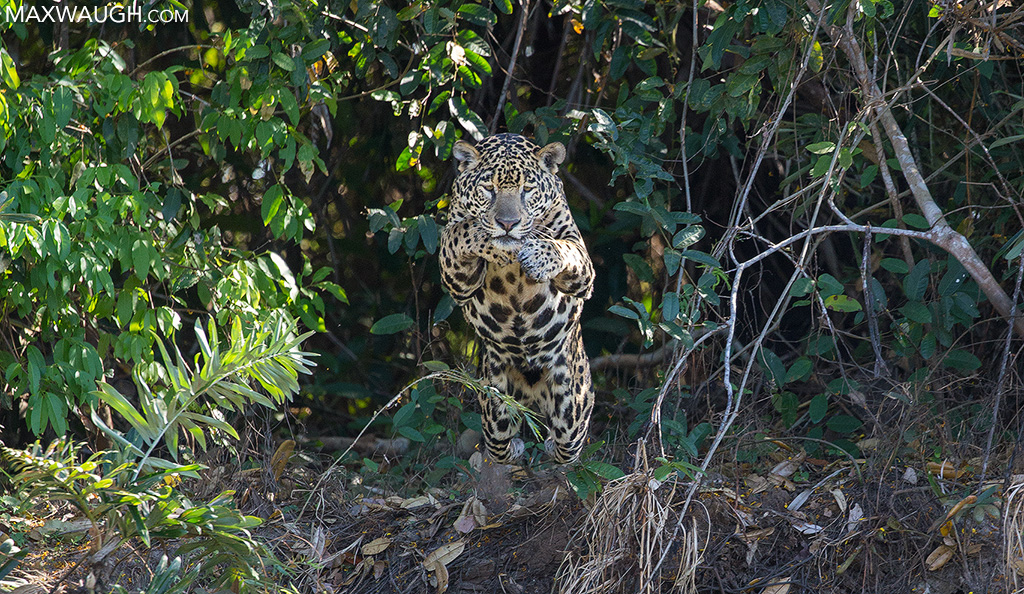 A jaguar launches itself toward the water and an unsuspecting caiman.

The full sequence of images showing a jaguar leaping into the water after a caiman. It was unsuccessful. 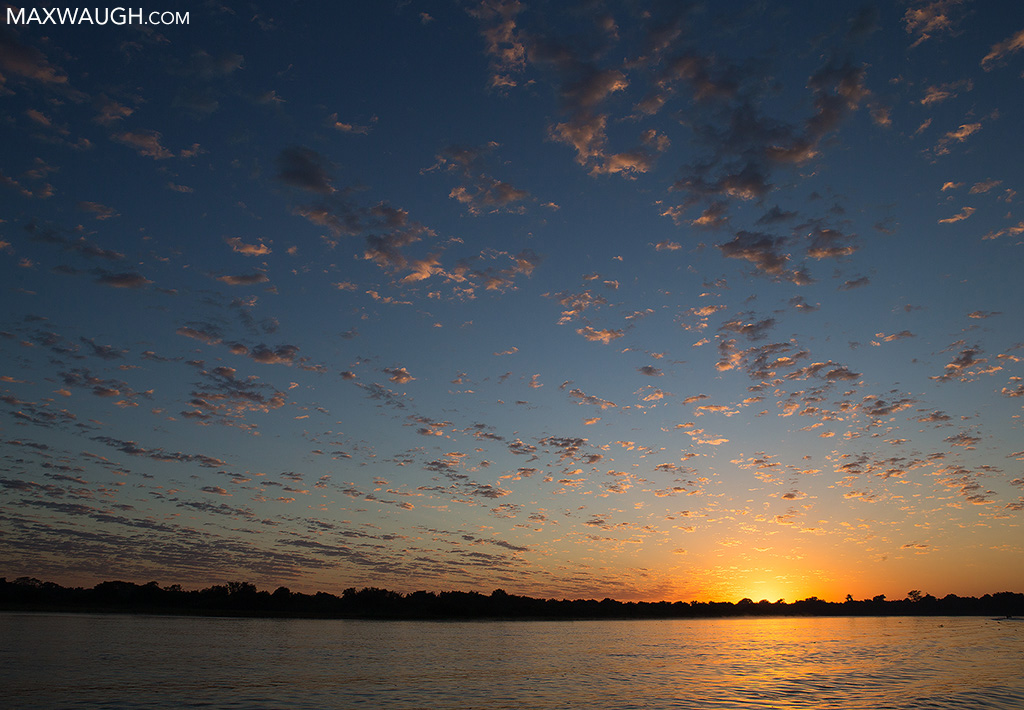 Every day in the southern Pantanal we were out at sunrise looking for jaguars along the river. 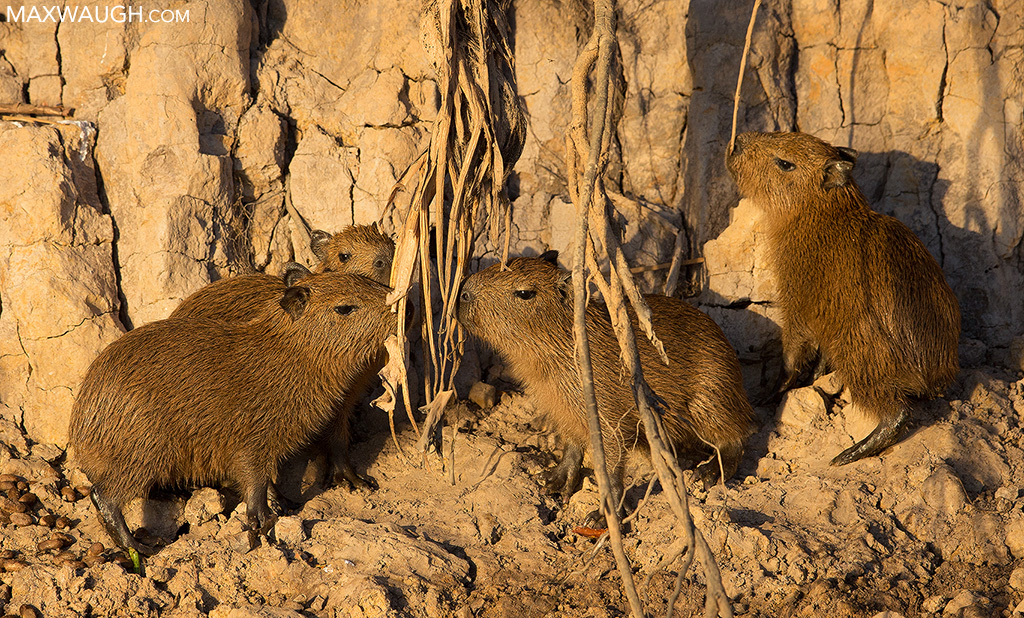 We saw numerous capybaras along the Cuiabá River, including several youngsters. 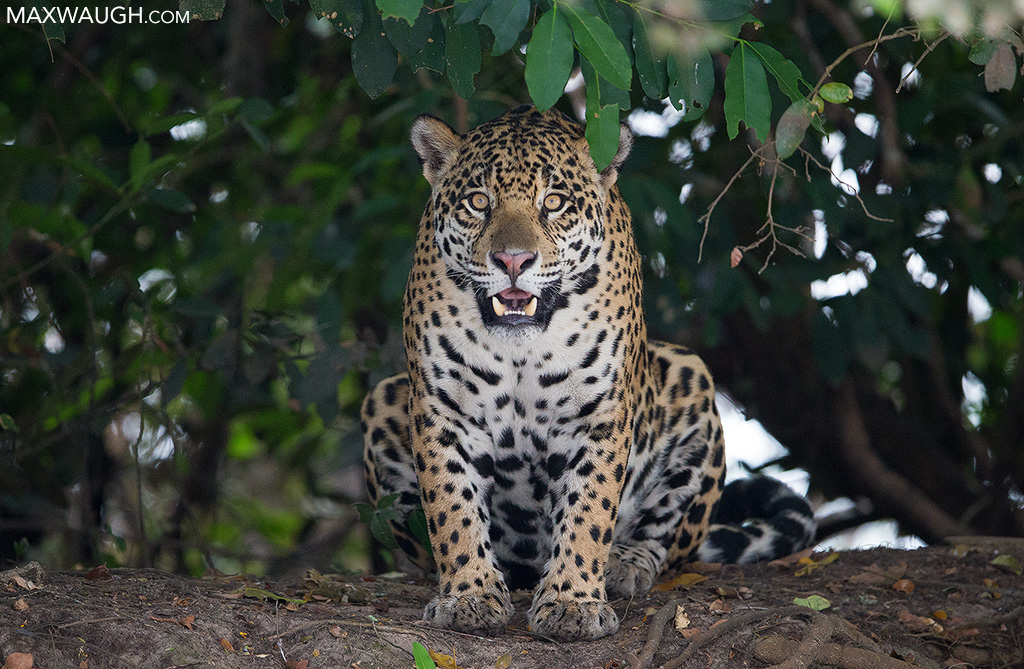 We ended the trip with three jaguars on our final excursion, including this burly female. 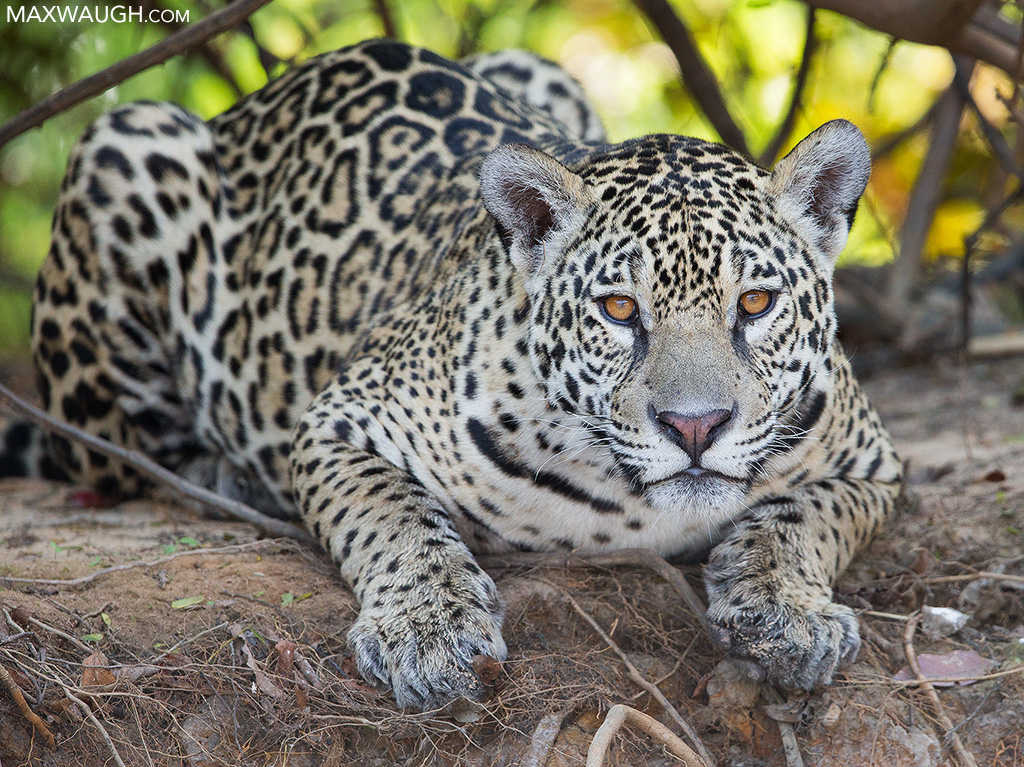 Our final jaguar of the trip was this beauty, which had orange (rather than yellow) eyes. 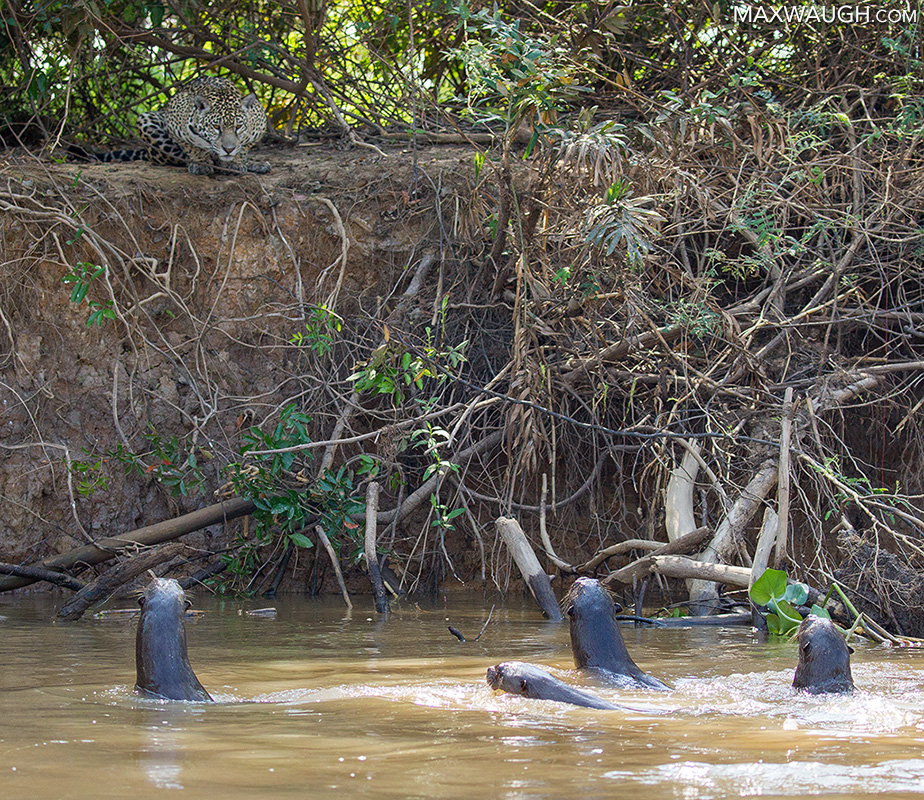 Our last jaguar encounter was pretty special. The orange-eyed cat was stalking giant otters, which had stashed their pups away in the river bank. Ultimately, the showdown ended in a stalemate. A great way to end our time in the Pantanal!

View all of the photos in the Brazil 2017 Wildlife & Scenery gallery.  And remember, you can order prints of nearly any image in the photo archive.

This scouting trip was a big success, so I will be leading a photo tour back to the Pantanal in late July of 2018.  We’ll look for jaguars (we have a very good chance of seeing them) and other wildlife, including many of the amazing birds featured above and in the gallery. 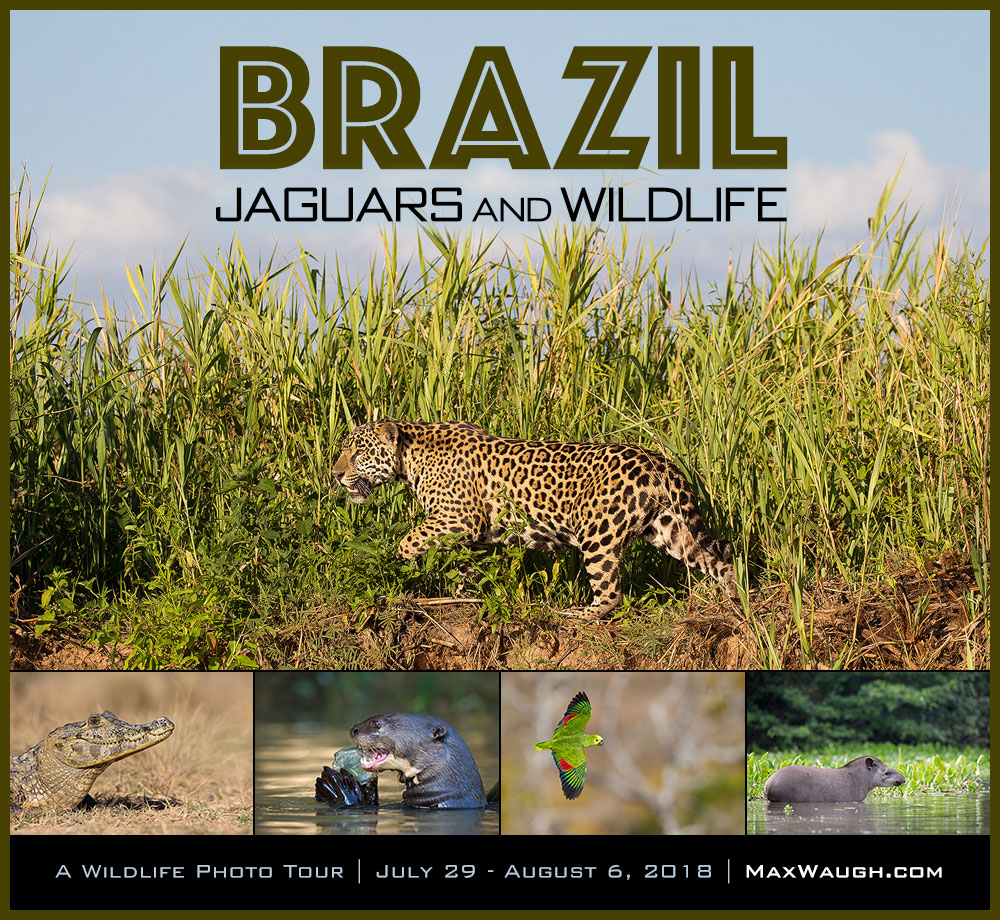 This tour is limited to 6 guests.  There are only 2 spots left!

Learn more about the 2018 Brazil Jaguars and Wildlife tour here.