This is the first time I can remember writing a single report for an entire trip (not counting last year’s one day fall experience), but circumstances didn’t quite demand multiple reports this time around.

I’m out in Yellowstone on a family trip, which means more time on the road to/from the park (two days each way rather than one) and a fair amount of time spent back in Silver Gate either hanging out with Jenn and our son, or getting work done on our cabins.  I’ll feel fortunate if I get the equivalent of three full days in the park this week.  Probably won’t happen…

We arrived late Sunday.  That was the second part of our two day haul from Seattle, but it still took eleven hours due to baby stops and some supply shopping.  So I wasn’t going anywhere on Monday.

We stuck around Silver Gate all day to recuperate, but the day wasn’t completely devoid of wildlife.  From the dining room, Jenn spied a fox hunting out near the creek before it disappeared into the willows.  Later in the afternoon a bison came out and grazed in the meadow that extends onto the neighbors’ property.  Walks outside the cabin and into Silver Gate yielded a few bird and squirrel sightings.  Clark’s nutcrackers and Steller’s jays chased each other through the trees.

On Tuesday, I did make it into Yellowstone for a half morning.  It seems like every First Day of park exploration starts with fresh snowfall in Silver Gate.  We got a centimeter or two overnight, and the park was hit as well.

Yellowstone is in transition.  Fall doesn’t last long around here.  Beige, dark green and a dusting of white dress the park up like it’s winter, but splashes of orange and gold in the ground cover, willows and aspens add vibrance that won’t be found here in a couple weeks.  Surprisingly, the autumn colors have not yet peaked in most places.  Many of the aspens and cottonwoods still have green leaves.

There are other reminders of autumn.  I spotted a Northern harrier circling over the grasses in Round Prairie during the morning drive in.  This is an uncommon bird in the park, probably another migrant heading on to winter hunting grounds.  In the Lamar Valley, a lone bull elk stalked his tiny harem of four cows up a distant hillside.  Pronghorn bucks also kept eyes on their own groups of females, snorting and chasing off rival suitors.

Many of the bison were high up in the snow-covered hills, coats frosty on a morning that didn’t rise past 25 degrees.   The semi-transparent blanket of snow was slashed with solid white lines, where the snow had settled more thickly into the various game trails spanning the hills.  These white veins were reminiscent of the scarred moons orbiting our solar system’s gas giants (with all the recent talk about the Cassini satellite, the image is stuck in my head). 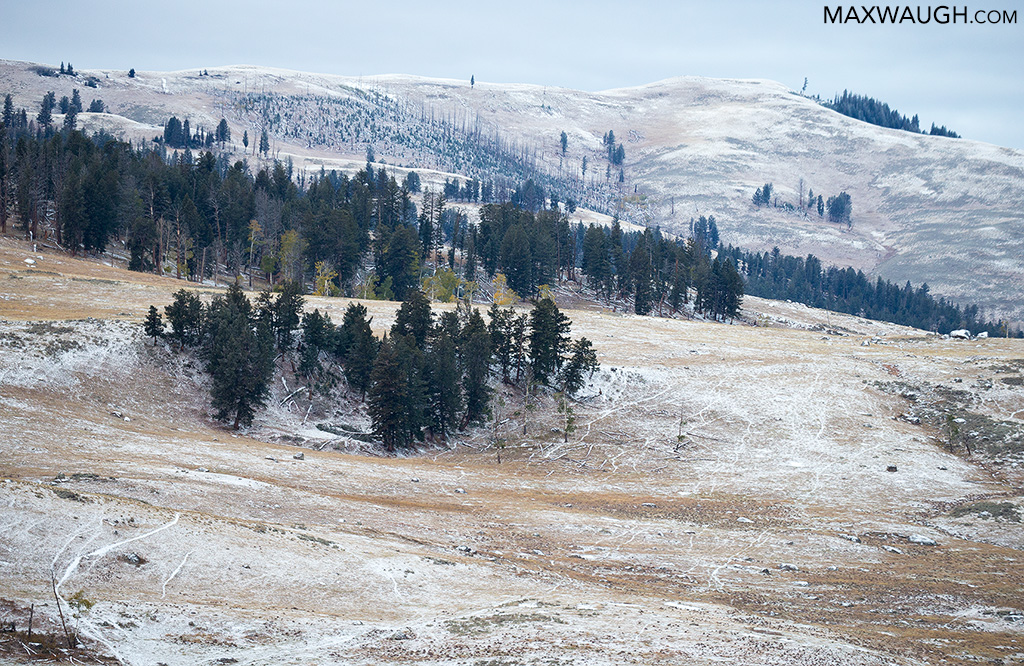 It was one of those Yellowstone days I usually label as being “quiet.”  Sightings on Quiet Days are typically limited to bison and other ungulates, scattered common birds (I once again stopped to try and photograph a raven)… and squirrels.

Dunraven Pass was open (it was closed just a couple days back), so I went south to scour Hayden Valley for the billion-wolf Wapiti Pack (okay, they only have twenty, but that’s a lot).  No luck there.  Trumpeter swans were spread over the length of the Yellowstone River.  I didn’t have a lot of time, so I returned northward after driving the full length of the valley.

I made one more stop before heading back over Dunraven, checking one of my Great gray owl spots.  I didn’t expect much, as it’s been a quiet year for owls here, but it’s always worth looking… and I enjoy these walks in the woods.  Scattered coyote tracks dotted the snow, nuthatches cheeped high in the treetops, and I did find a squirrel to photograph. 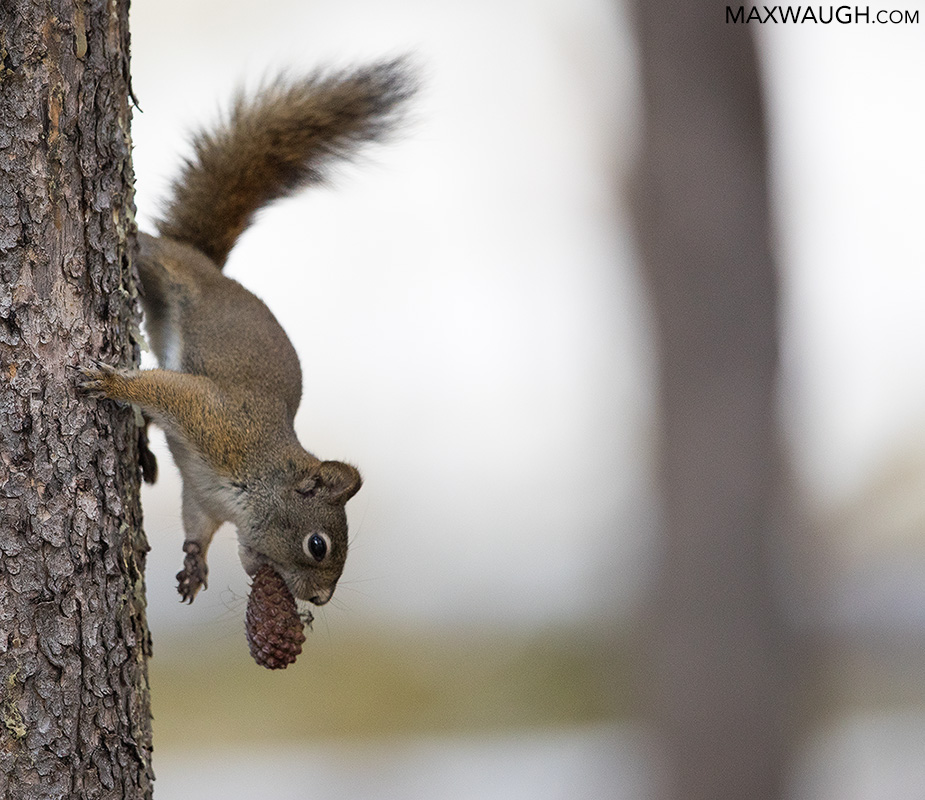 But no owls.  So back north I went.  The drive home took me past a small herd of young male bighorns and some pronghorns in Little America.  Back in Silver Gate, more bison strolled through our property.

Another morning in, since there was more cabin work to attend to… and a baby to attend to while someone’s attending to work.

For most of the morning it was bright and sunny.  I kept an eye out the window, but beyond a nutcracker, we didn’t have any visits from the wild neighbors today.  Several moose have been spotted in town lately, but we have yet to see them.

By the time we freed ourselves to escape the cabins it was past 2pm.  We needed to make a run to Gardiner, so at least I was able to make a quick drive through the park.  The morning warmth and sunshine had worn off by then, giving way to threatening dark gray skies.

I didn’t get to touch my cameras during the journey.  There were a few different herds of cow elk being attended to by bulls, near Roosevelt, Mammoth and the Arch, but I never found a reason to take pictures.  What I presume was a black bear caused a jam at Elk Creek.  It would’ve been the first bear of the trip for me, but we couldn’t see it through the thicket as we drove past.

Below Mammoth we were pelted with hail and frozen rain, which followed us all the way out of the park.

In Gardiner we stopped to visit with friends (dropping off early Christmas gifts, since we probably won’t be here in December) before stocking up at the grocery store and returning back through the park.

Back in Silver Gate, a couple of bison looked like they wanted to get on the swing set in the public park.  A third bison greeted us next to our driveway.  Still no sign of moose.

I was granted freedom on this morning, so I was heading into the park by 7:15.  It remained a mooseless and bearless trip so far.  Plenty of bison though.

It was a pleasant morning.  Cold, sure, but sunny.  The Lamar Valley was big, brown and empty.  Not unlike Cleveland’s professional football stadium by the third quarter on a given Sunday.

I am seeing a lot of bison, but the rut action is largely over, so it’s mainly herds of cows and calves.  The big boys have largely dispersed, and I’m not even seeing many bulls out on their own.

Once again, I chose to head over Dunraven Pass.  The Wapiti wolves had been seen on a carcass near Canyon junction Wednesday morning, which actually means very little in regards to current events.  Even half of that pack would finish off an elk kill in a matter of hours… there would be little reason to return to the site for a second day.  Nonetheless, odds of a good wolf sighting are increased when one is dealing with a megapack (by current Yellowstone standards).  I held out hope.

No wolves, but I did stop to photograph trumpeter swans.

I continued down to the Lake… grizzlies perhaps?  Nah, more birds.  And scenery. 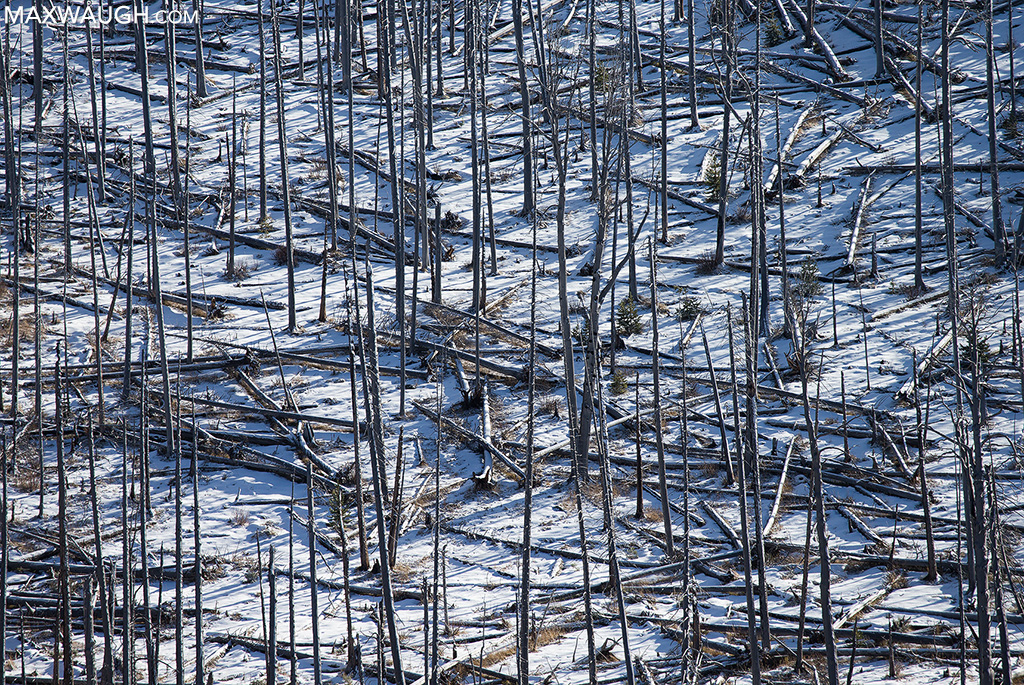 A kingfisher perched above the ponds bordering Sedge Bay, and a young Red-tailed hawk posed for a couple photos near the road. 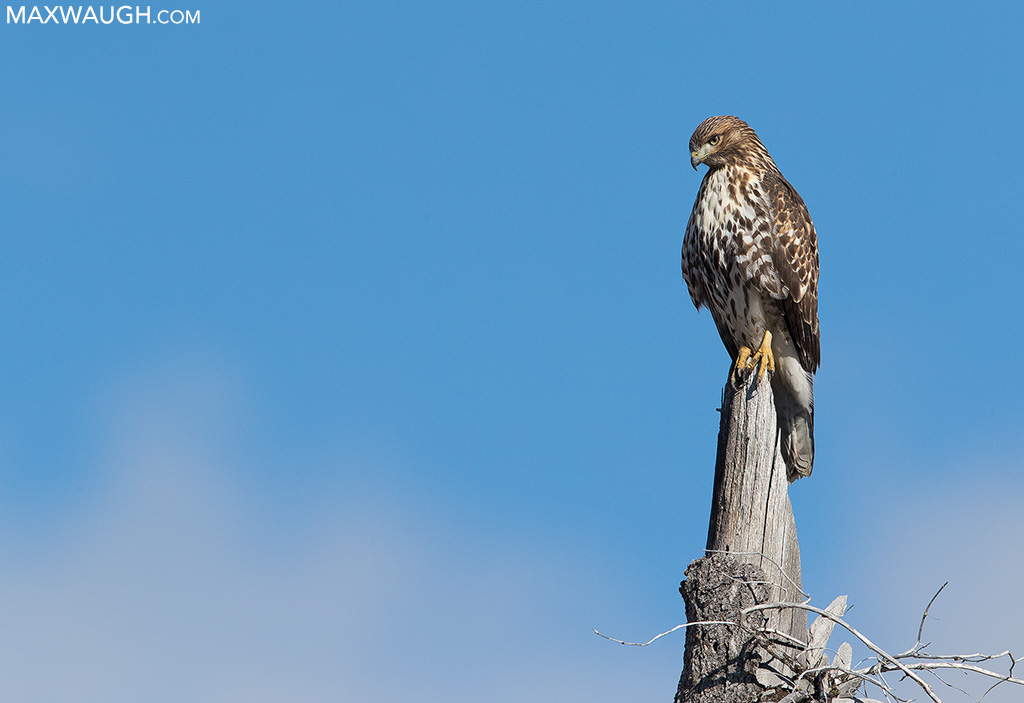 Returning to Fishing Bridge Junction, a coyote was mousing near the road.  I was two seconds too late, literally.  As I was lifting my camera it pounced.  After that, a few other mousing attempts occurred, each obscured by tall grass or at the wrong angle.

I saw a couple more coyotes on the drive home, in the Lamar Valley and at Round Prairie, but that was it for notable sightings the rest of the way.

It was my last chance to get into the park (such a short trip!), and there was a little more pressure since I was leading a half-day private tour for our cabin guests.  Thankfully, they wanted to work more on technique than seek out specific animals, so they were open to anything.  And the wildlife happened to cooperate for us this morning.  So of the few half day outings I’ve had on this trip, this was the best one.

In Little America we stopped for a herd of pronghorn close to the road.  A male was dutifully following his harem around. 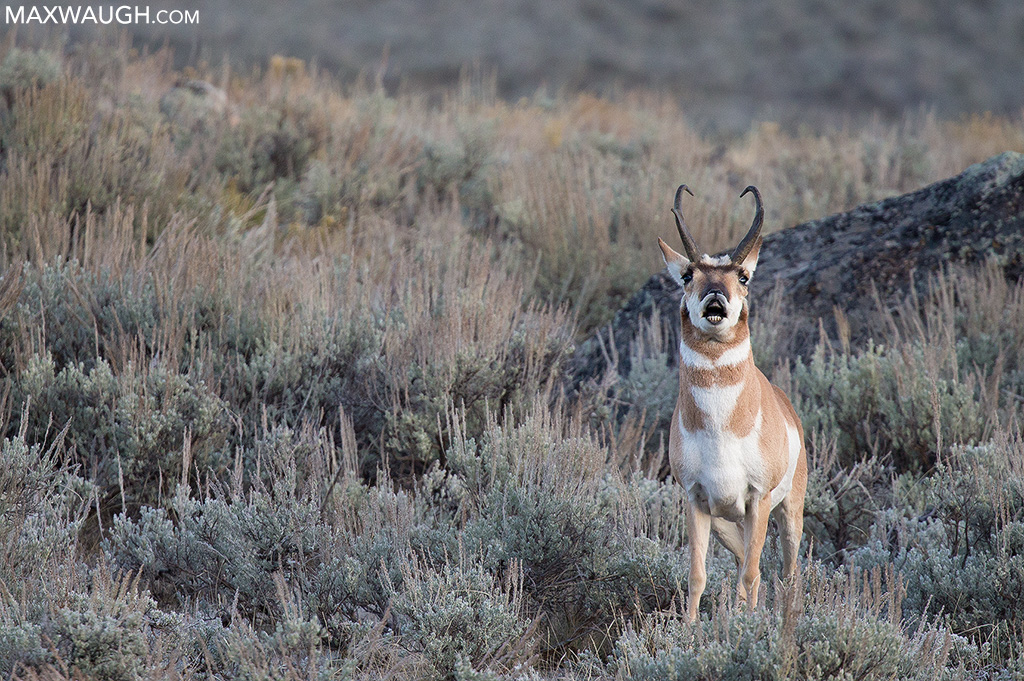 We watched them for a short while, and just as I started hoping for another buck to appear to challenge the first one… another buck appeared.  And they actually fought.  Not for too long though, and they calmed down remarkably quickly afterward.  Behind us, the full moon set behind the mountains.  It’s never a bad thing when you have something to photograph in opposite directions (the only tough part is prioritizing one over the other). 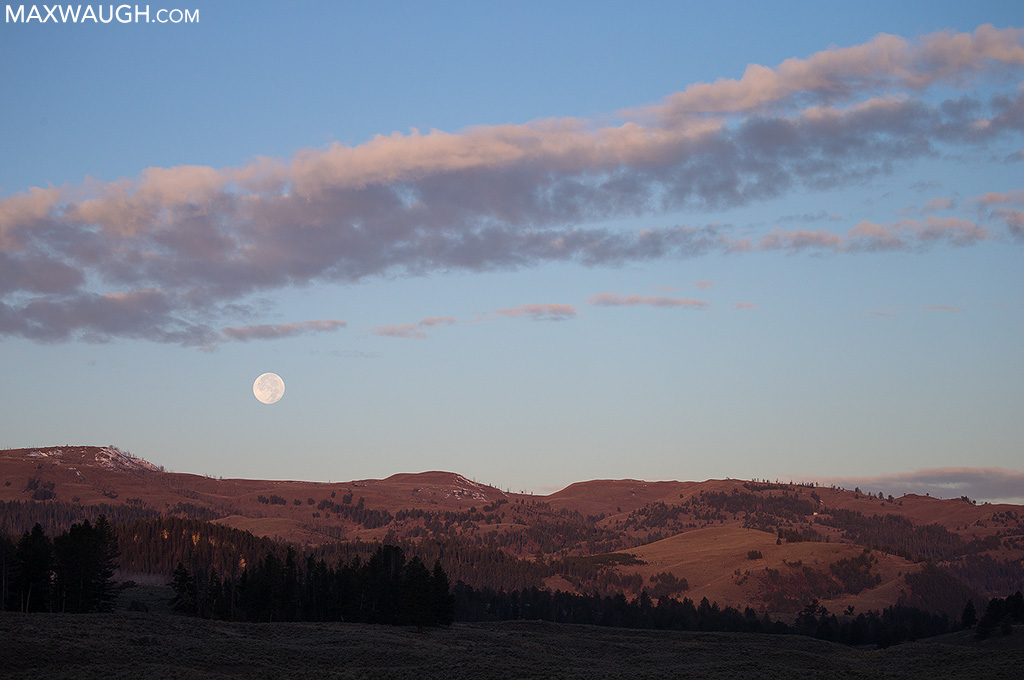 After that, there was a little more autumn rut action near Roosevelt, where a small herd of elk had attracted three different bulls, which were all bugling for their attention.

Over Dunraven we went, in time to arrive for some lingering fog and… wolves!  Finally, the Wapiti Pack made an appearance for one of my Hayden Valley forays.  So what if it was only three of them, and they were a ways off as they feasted on some leftovers, but we could at least see them through long lenses and a scope.

After that we backtracked a bit to photograph the Trumpeter swans on the Yellowstone.  They were being pretty feisty, chasing after each other, so we did score a little bit of action.

From there we continued south, checking the Lake and surrounding areas, including Bridge Bay, before we turned around to head back.  Though I needed to make it back home to start prepping for our departure, I did make one detour.  We stopped at Hellroaring to check on pikas, and were fortunate to find a cooperative individual right next to the parking lot.

On our way back we passed what was presumably a bear jam at Elk Creek, but the bear was down in the ravine and out of sight… so this may end up as a bearless trip for me.  Brief fox and coyote sightings completed a Three Dog Day.

Barring any late sightings here on the property or on our way out tomorrow, that wraps up this low key, family-oriented trip.  I’ll be back in January for back-to-back winter photo tours.  Expect some truncated reports then!

Leave a reply to Susan Click here to cancel the reply