It’s been fun spending most of the home season on the sidelines this year (after I missed the first several games last year).  Tonight’s Apple Cup was my final Husky game of the year, and it featured a showdown between #13 WSU and #17 Washington.

Despite the rankings, the Dawgs were heavy favorites entering the game, and they held up their end of the bargain.  In a familiar script, Washington ran the ball effectively against the Cougs while pressuring WSU quarterback Luke Falk and forcing several turnovers.

A selection of game photos are below.  View a few extra images in the full Apple Cup gallery here. 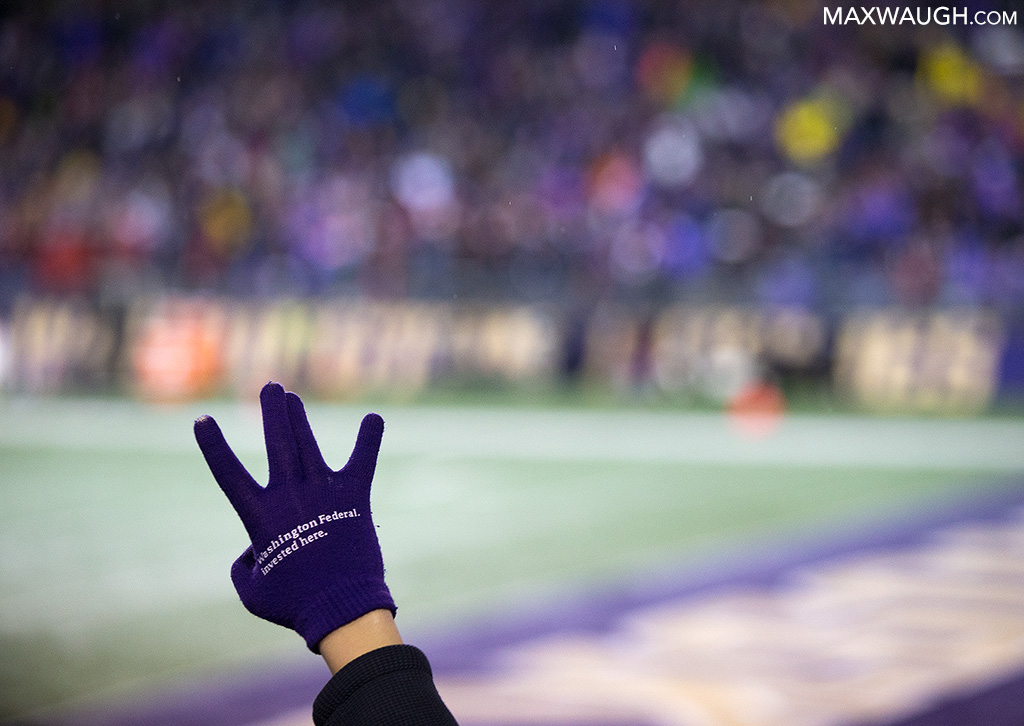 A fan flashes the W prior to kickoff. 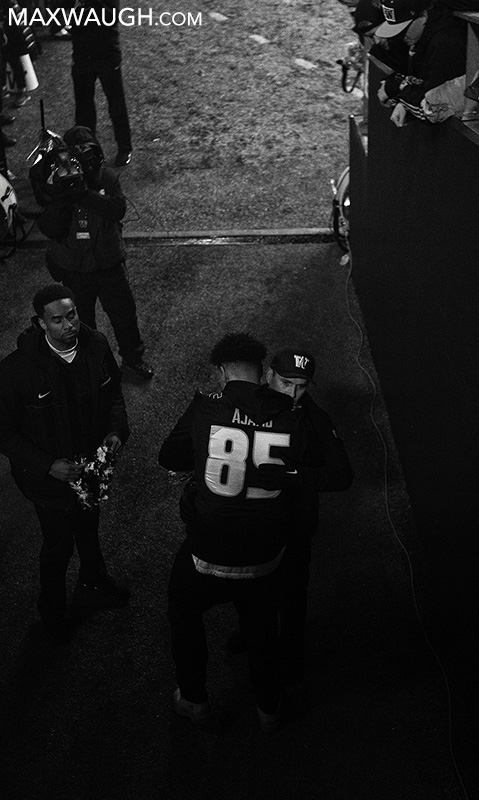 Senior David Ajamu, who lost this season due to injury, is greeted by Chris Petersen before entering Husky Stadium one last time as a player.

Senior Keishawn Bierria enters Husky Stadium for the final time as a player. 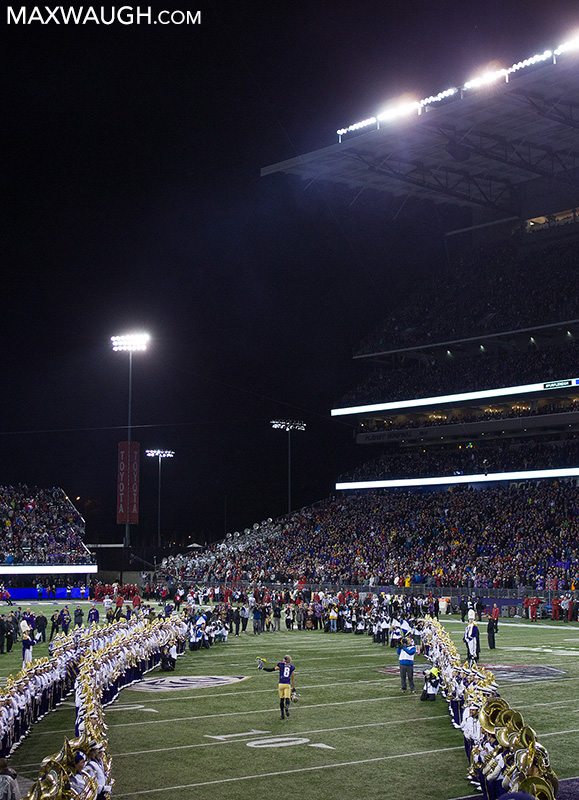 Dante Pettis bids a fond farewell to the crowd prior to his final game at Husky Stadium. 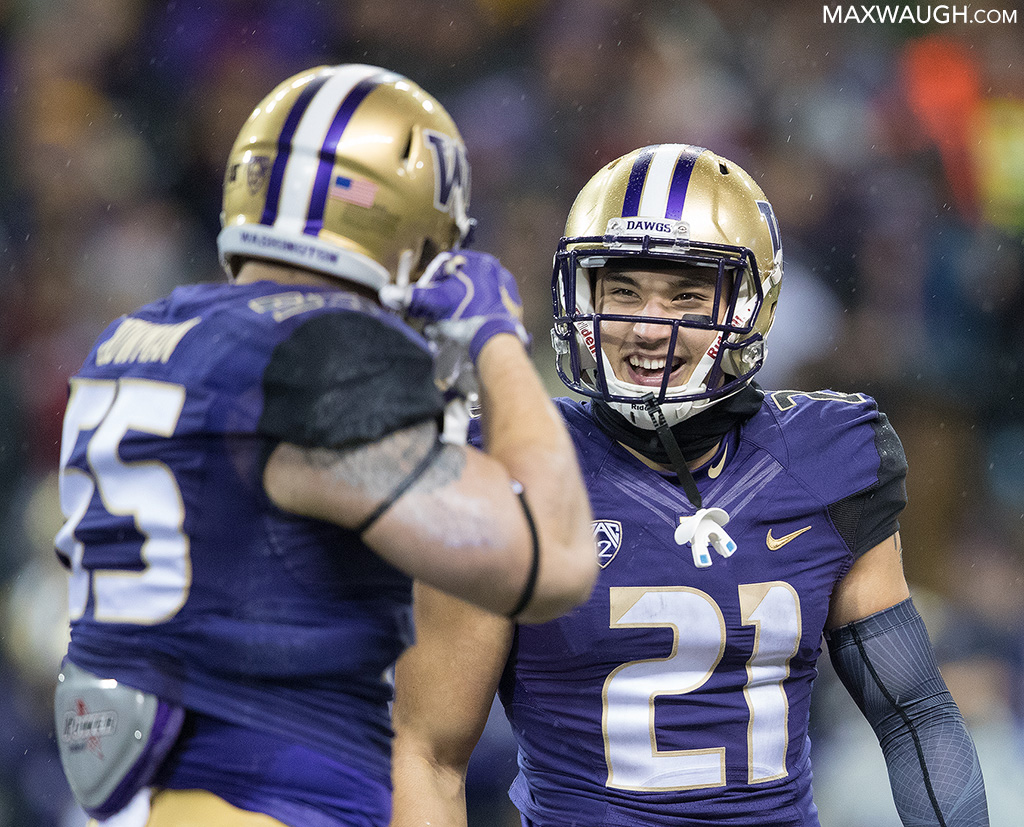 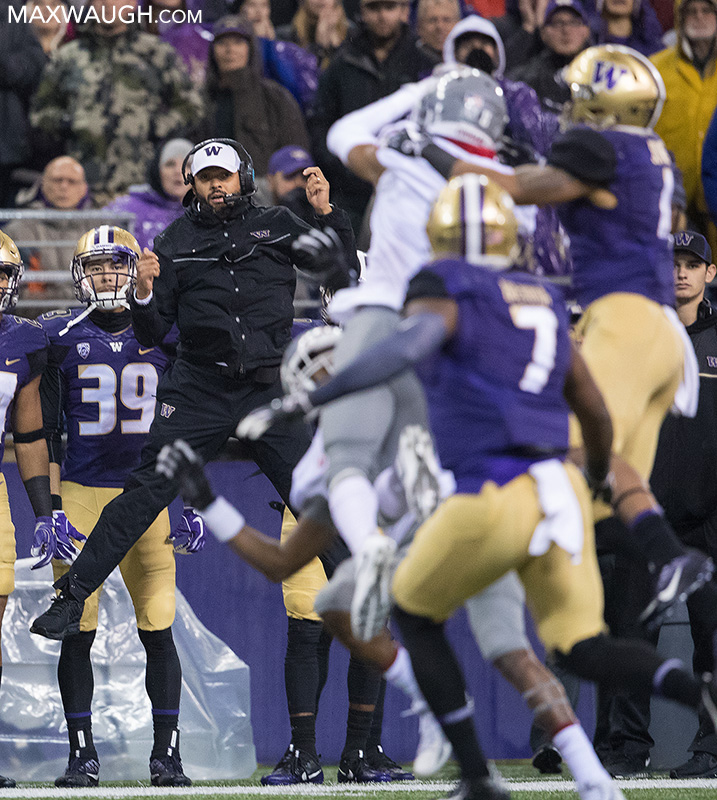 Husky DB coach Jimmy Lake leaps just as high as his defenders as they knock a pass away from the Cougars. 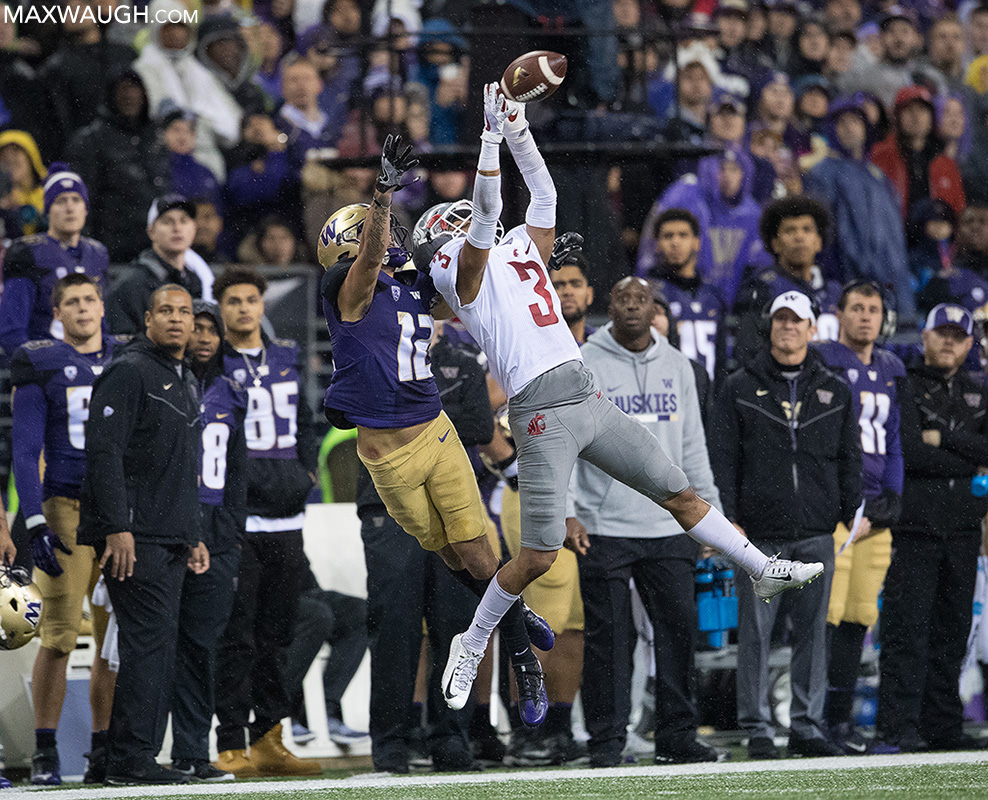 Cougar defensive back Darrien Molton leaps for a pass in front of Aaron Fuller. Fuller did a good job knocking the ball away to prevent an interception. 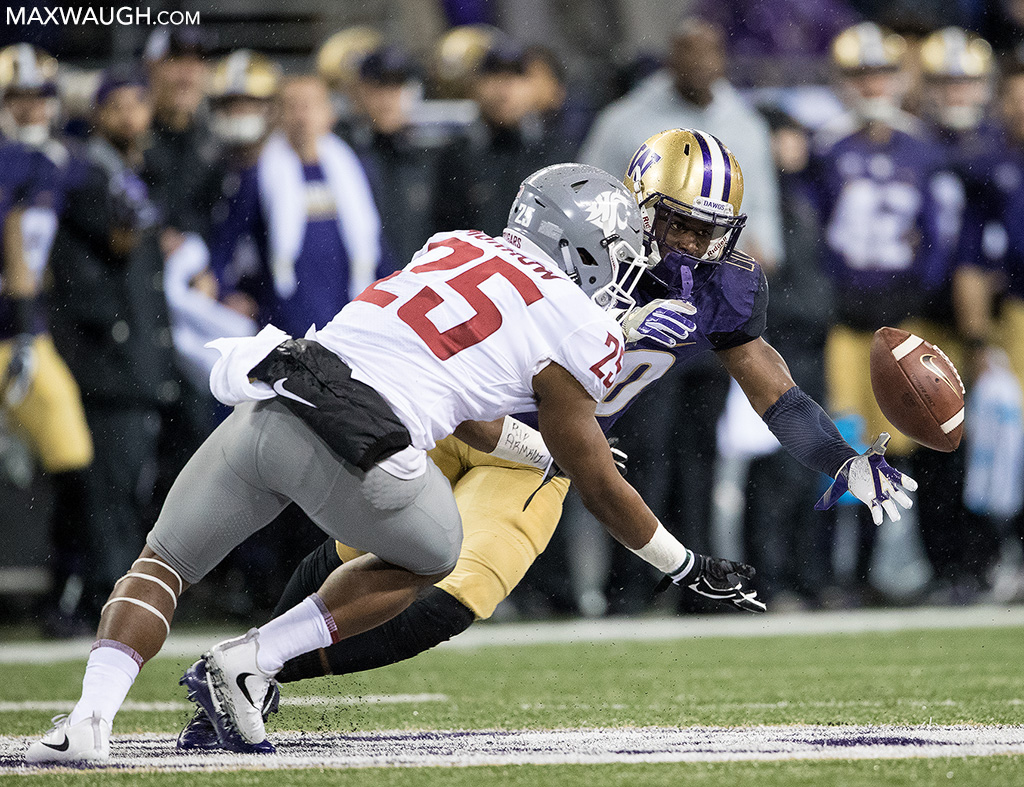 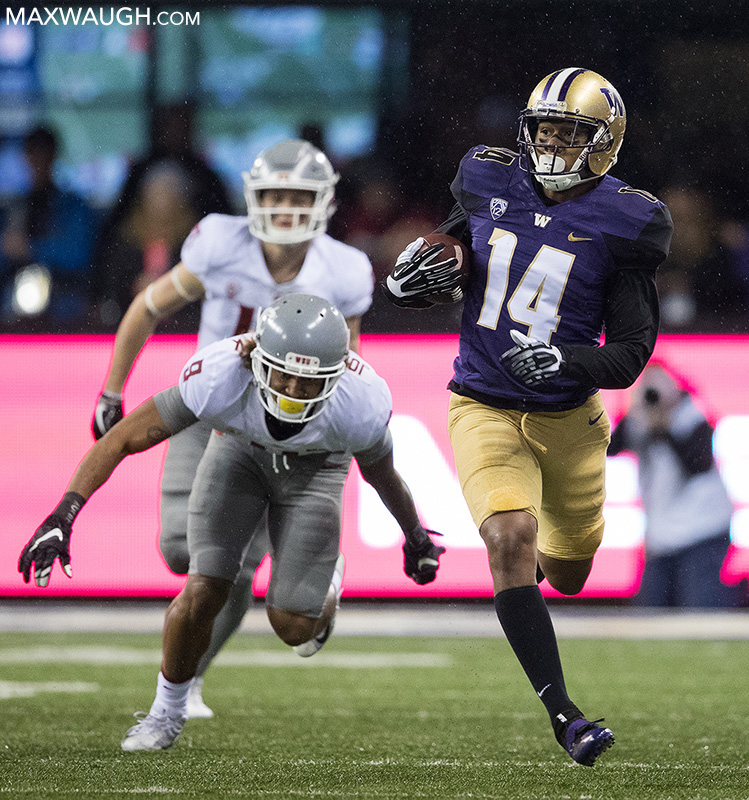 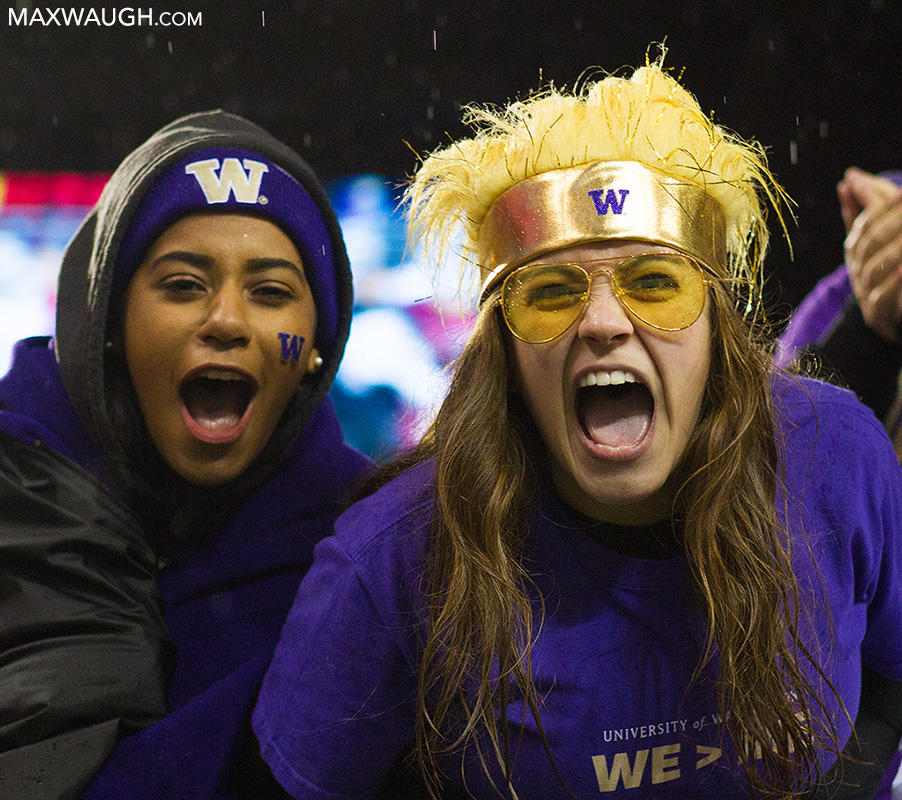 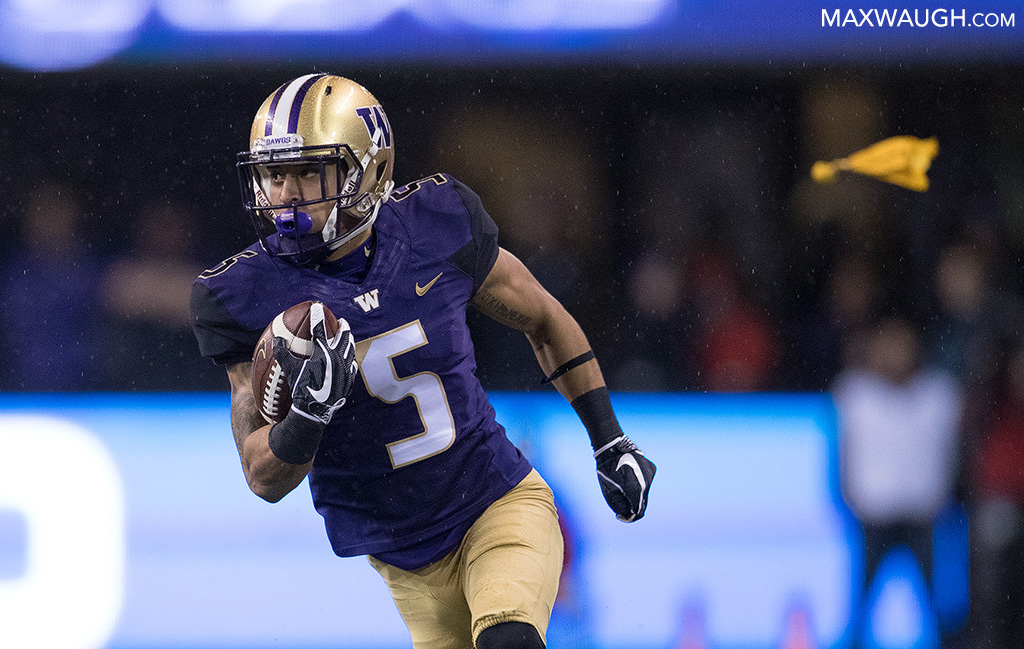 Andre Baccellia’s big gain was wiped out by an unnecessary holding penalty. 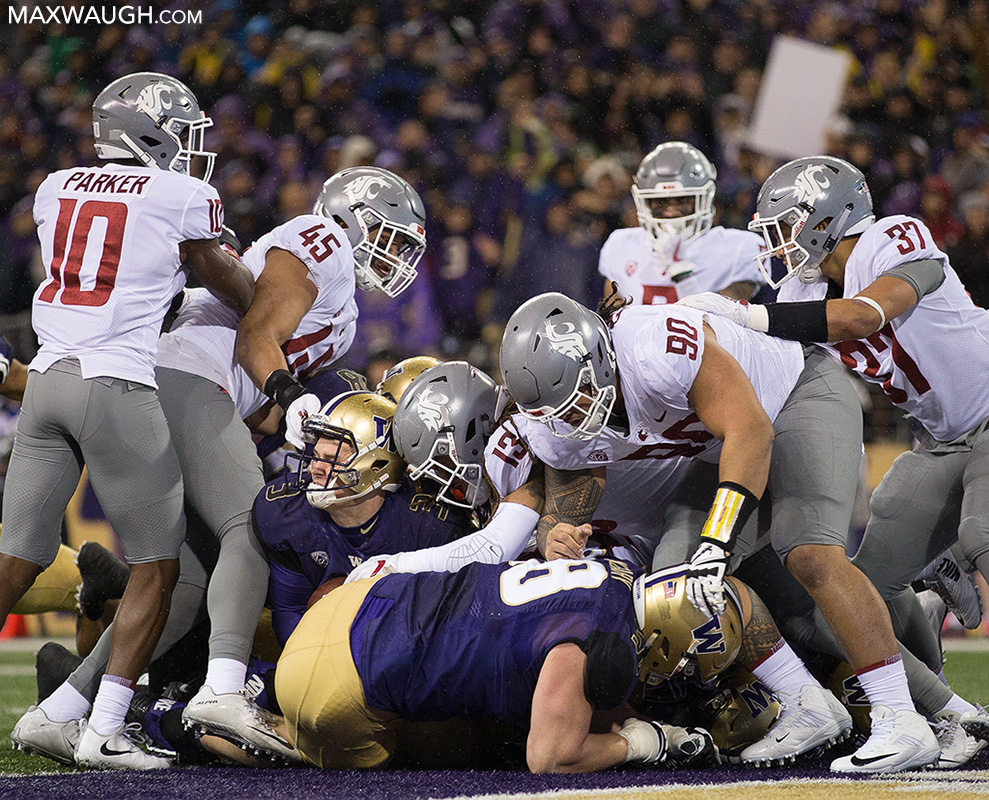 Jake Browning gets an extra tug on the facemask after scoring a touchdown. 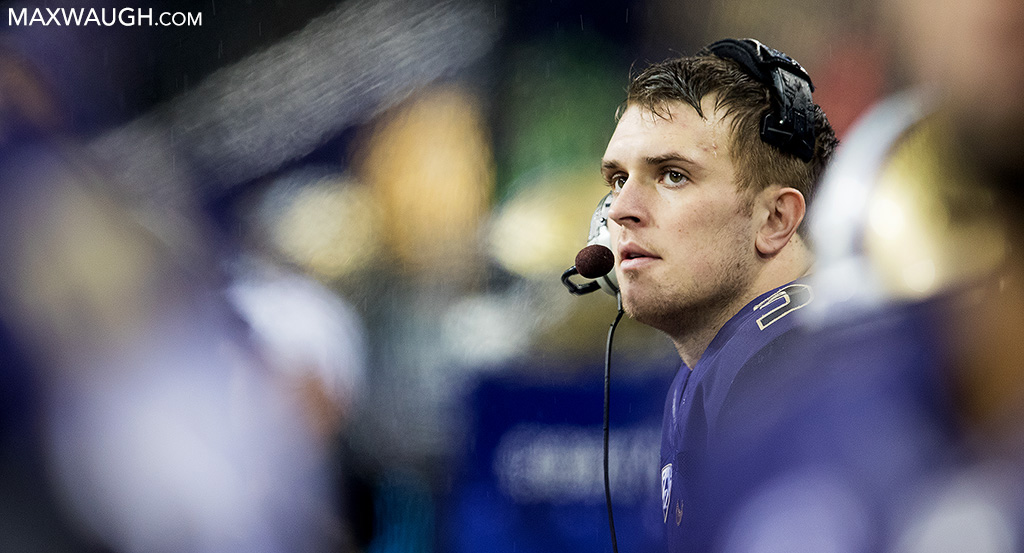 Jake Browning communicates with his coaches after another successful scoring drive. 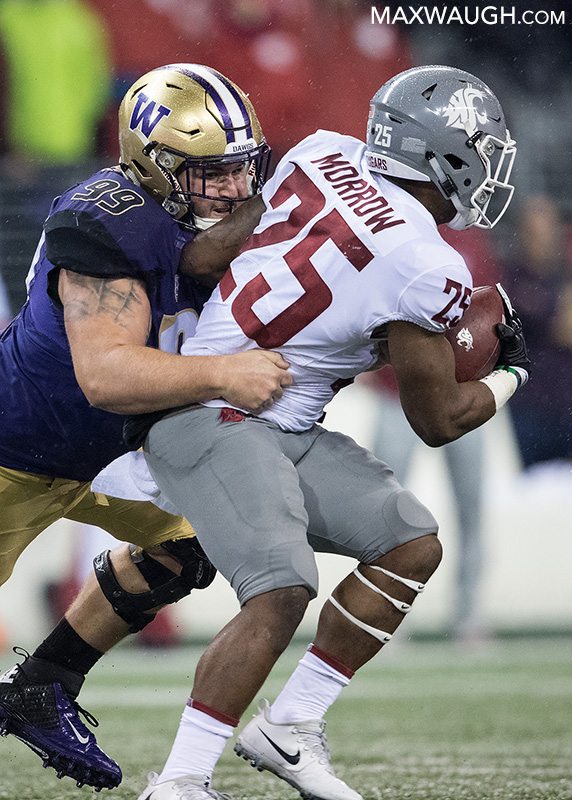 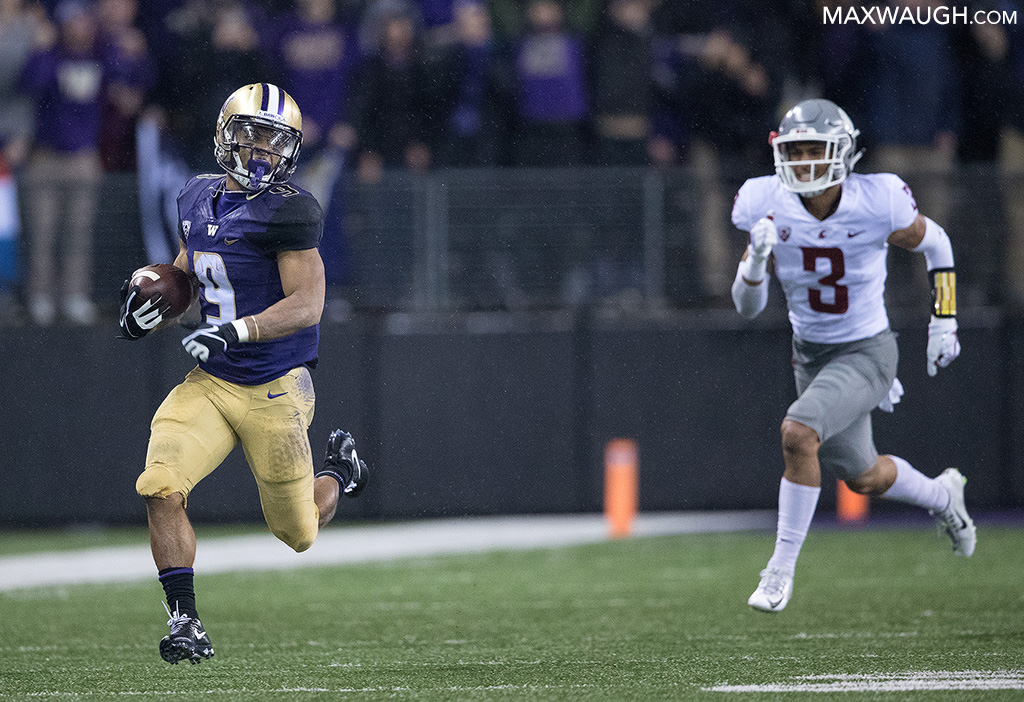 Another long gain for Myles Gaskin, who totaled 192 yards on 25 carries. 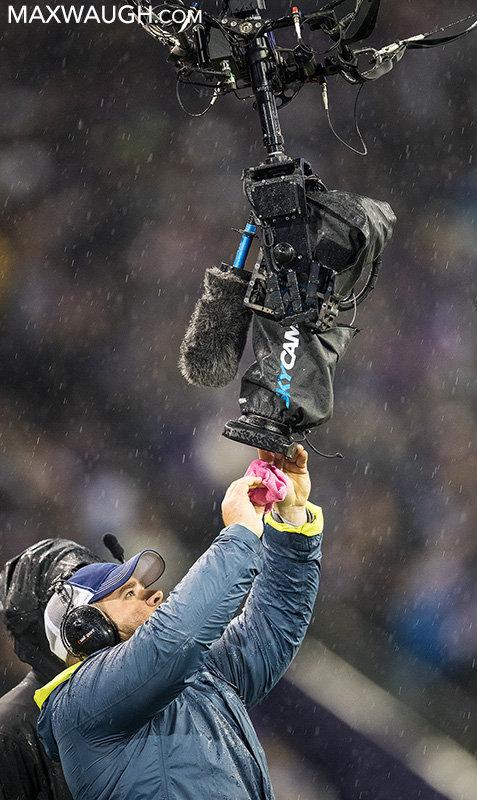 Skycam gets wiped down during a stormy evening at Husky Stadium. 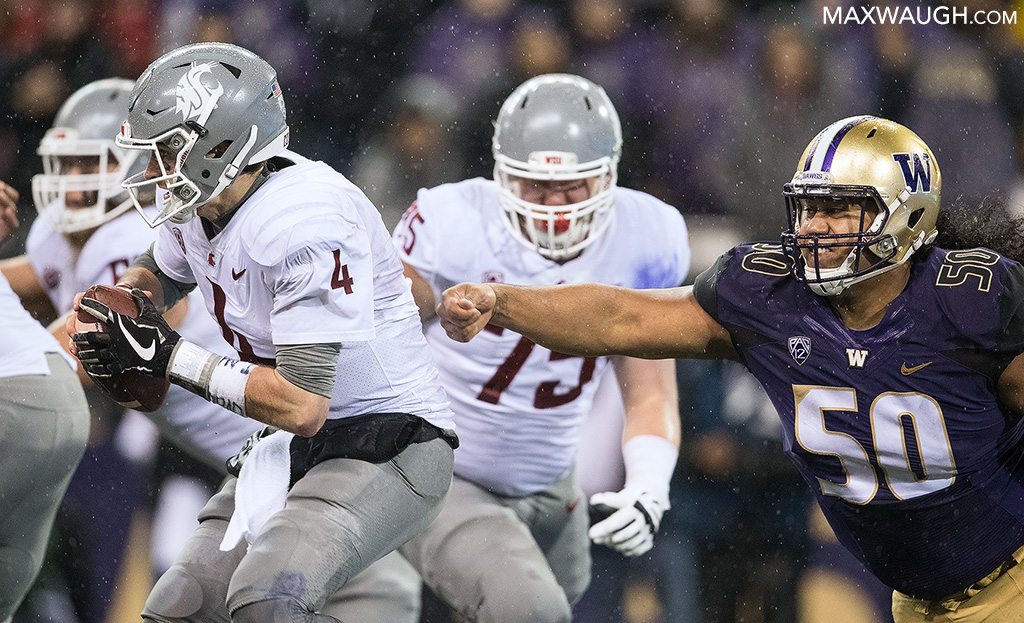 Luke Falk is lucky to avoid the grasp of Vita Vea… but he was still taken down by Benning Potoa’e on this play. 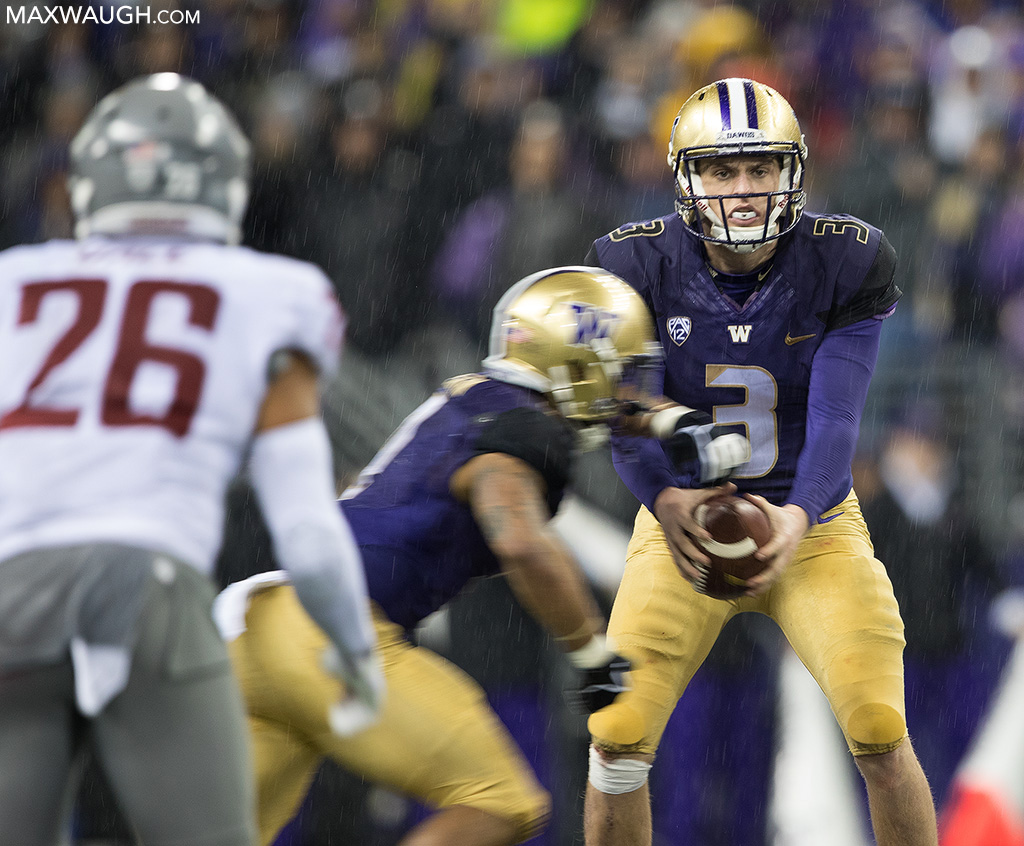 Jake Browning fakes the handoff during a rainy Apple Cup. 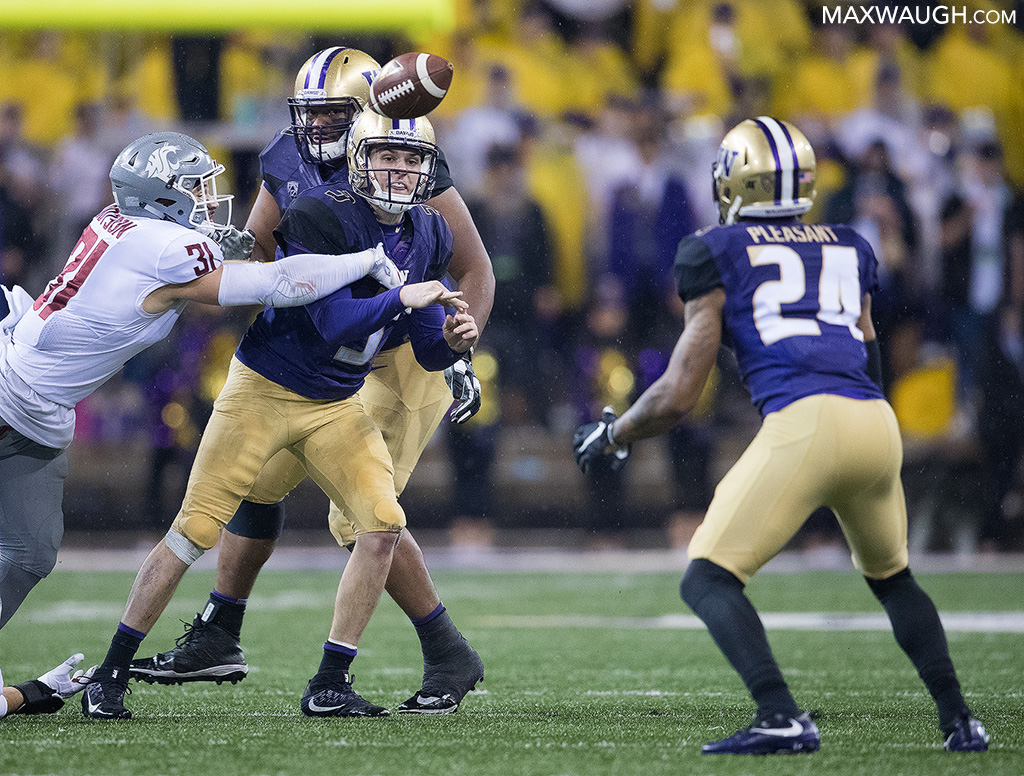 Jake Browning flicks the ball to Kamari Pleasant at the last possible moment. Pleasant took the pass for a big gain. 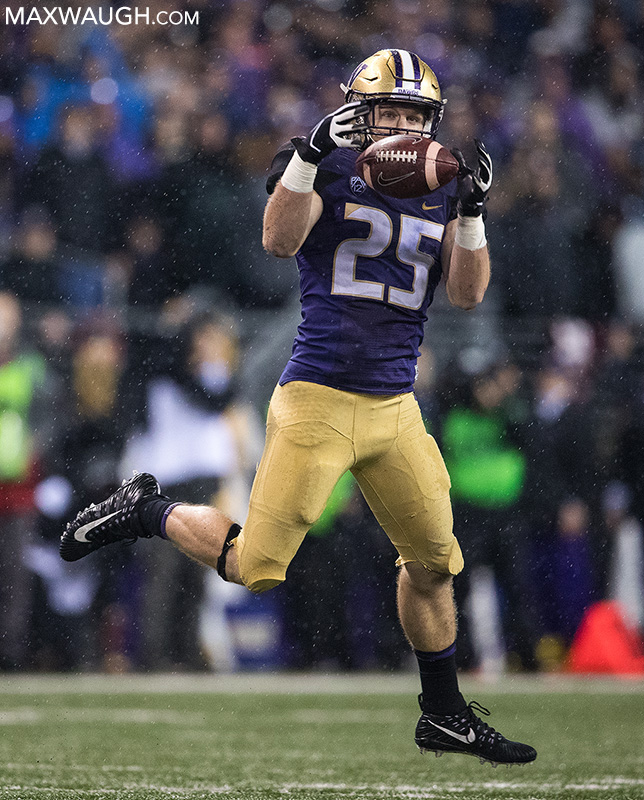 Ben Burr-Kirven receives a surprise gift when a Luke Falk interception pops into his hands. 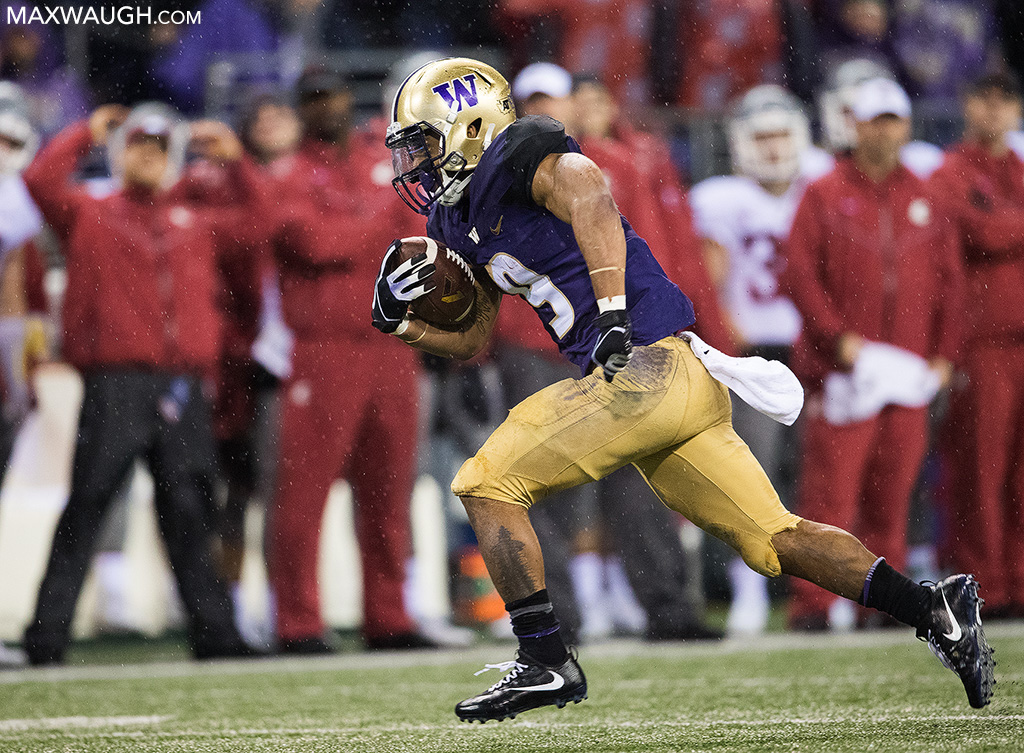 Myles Gaskin storms toward the end zone. Gaskin had four touchdowns against the Cougars. 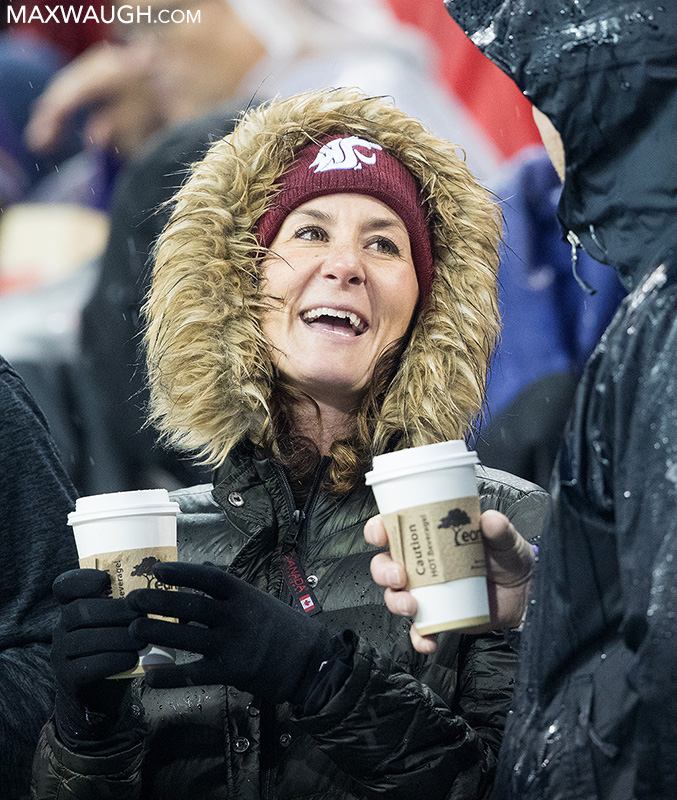 They may not have had good football, but at least these Cougar fans had coffee to warm their hearts. 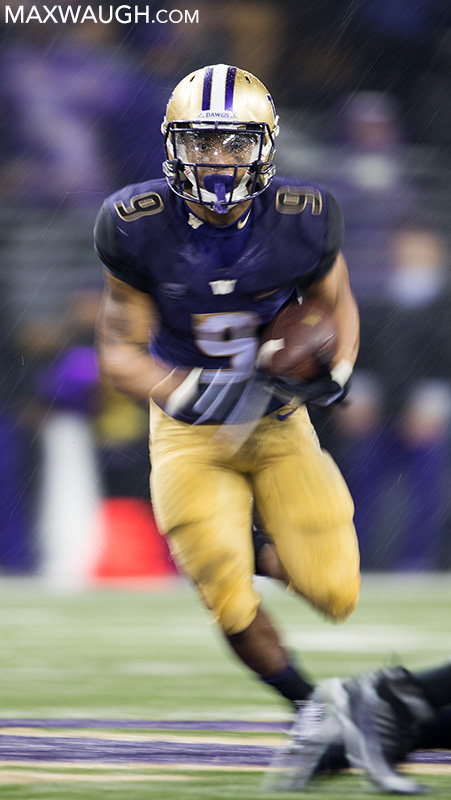 Gaskin is a blur on a rainy evening at Husky Stadium. 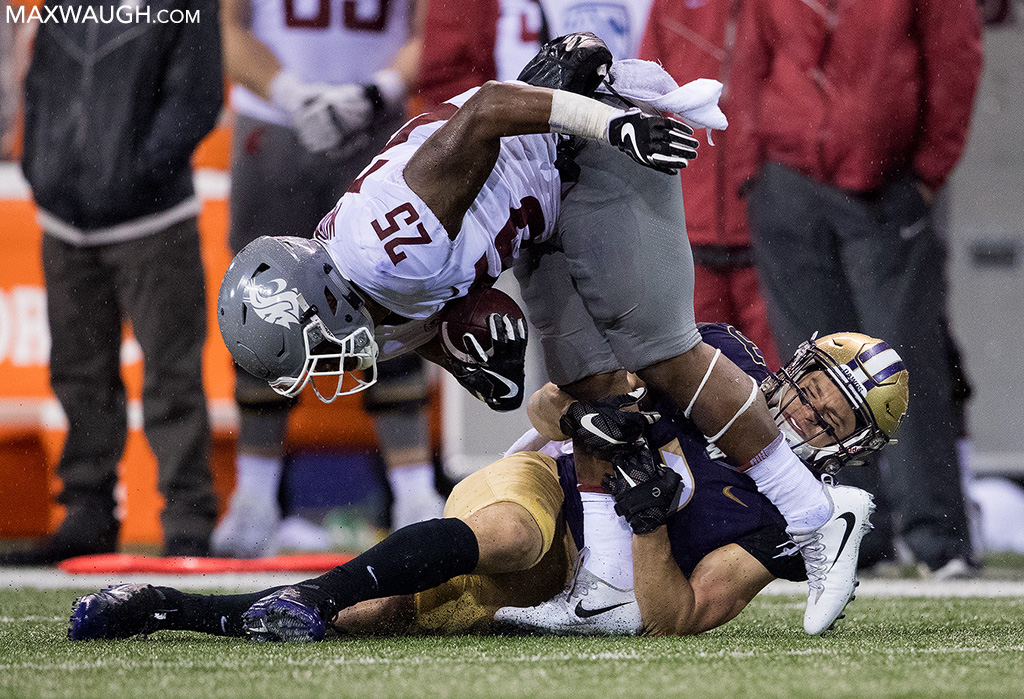 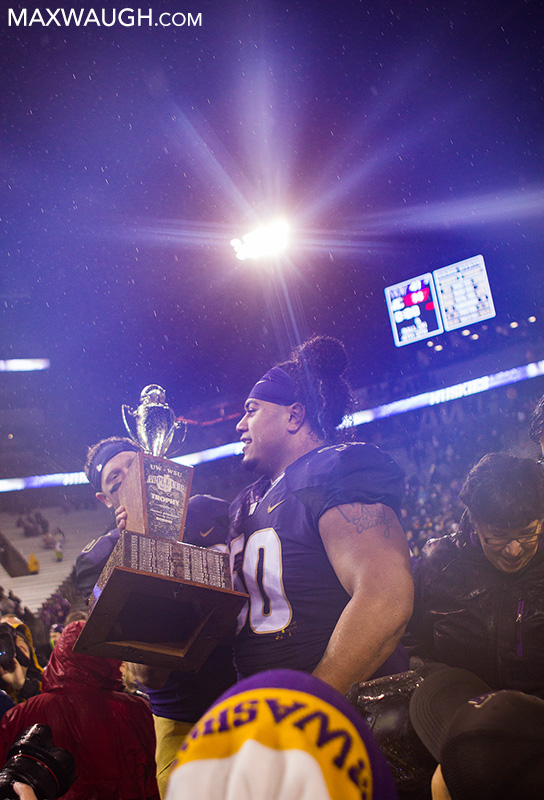 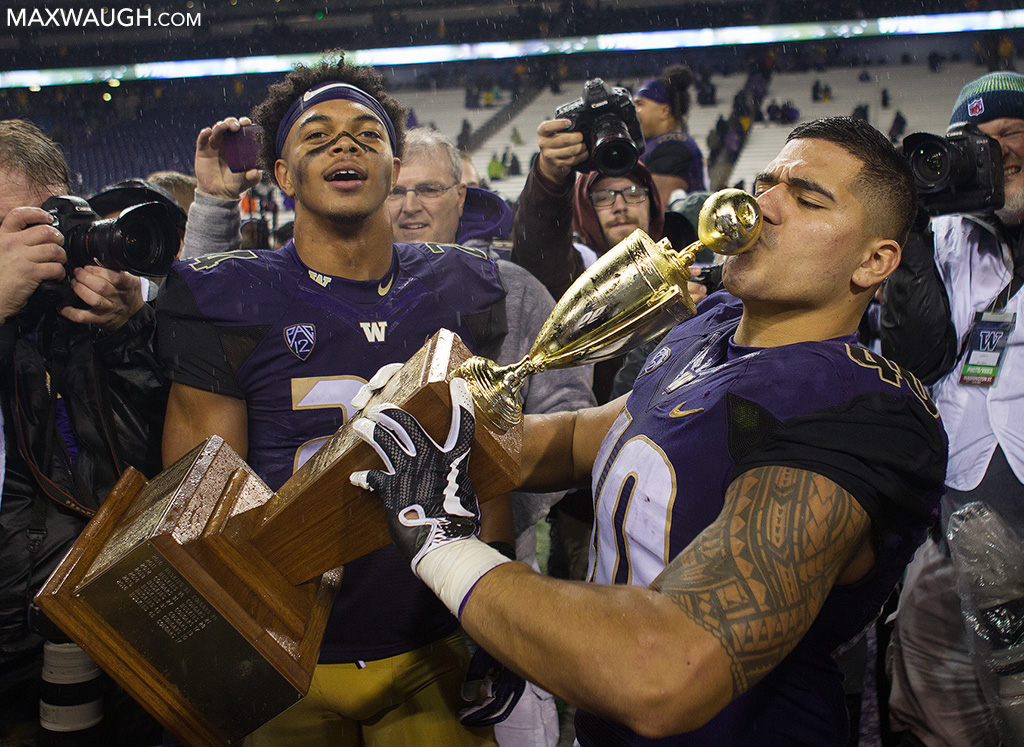 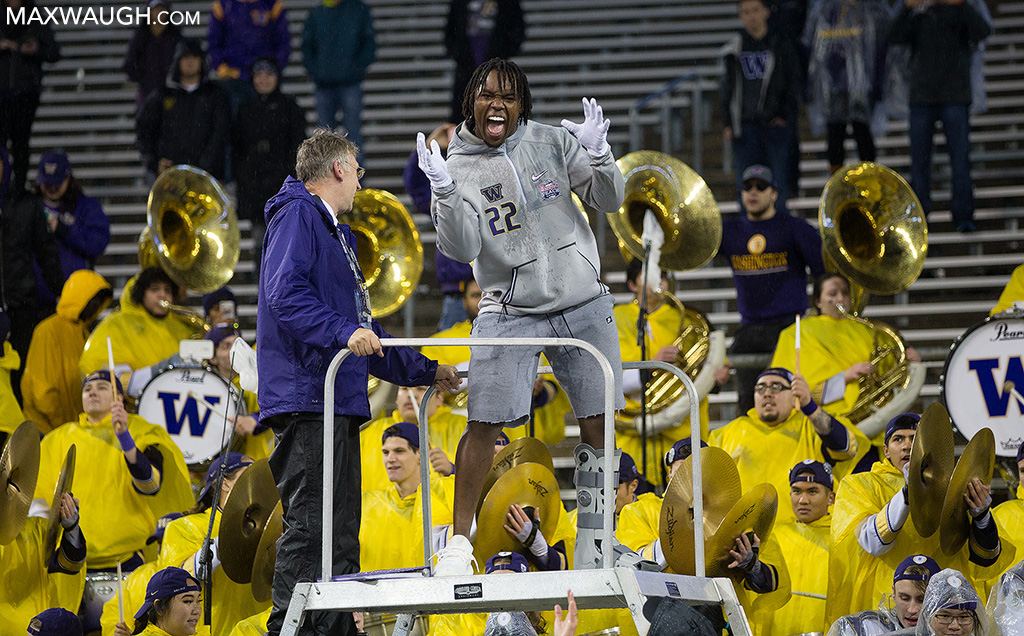 Lavon Coleman, walking boot and all, celebrates the Apple Cup win with the Husky Band after the game. 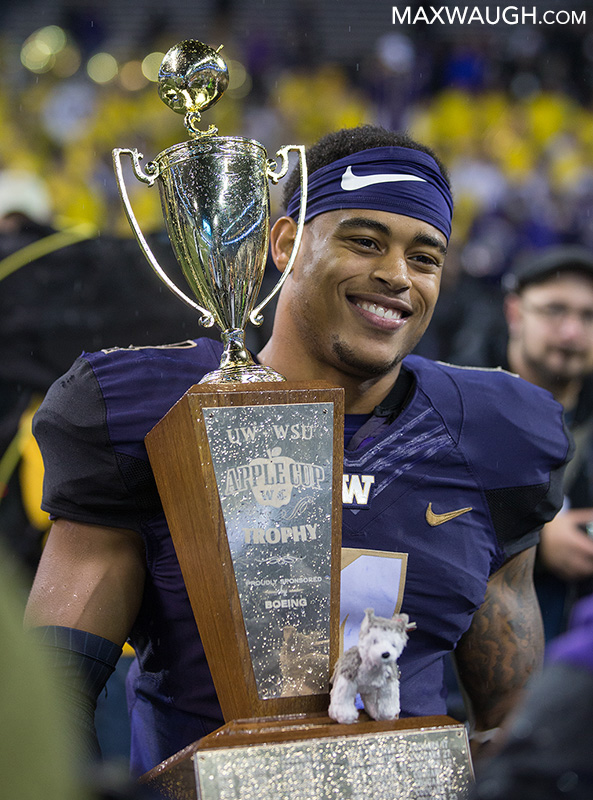 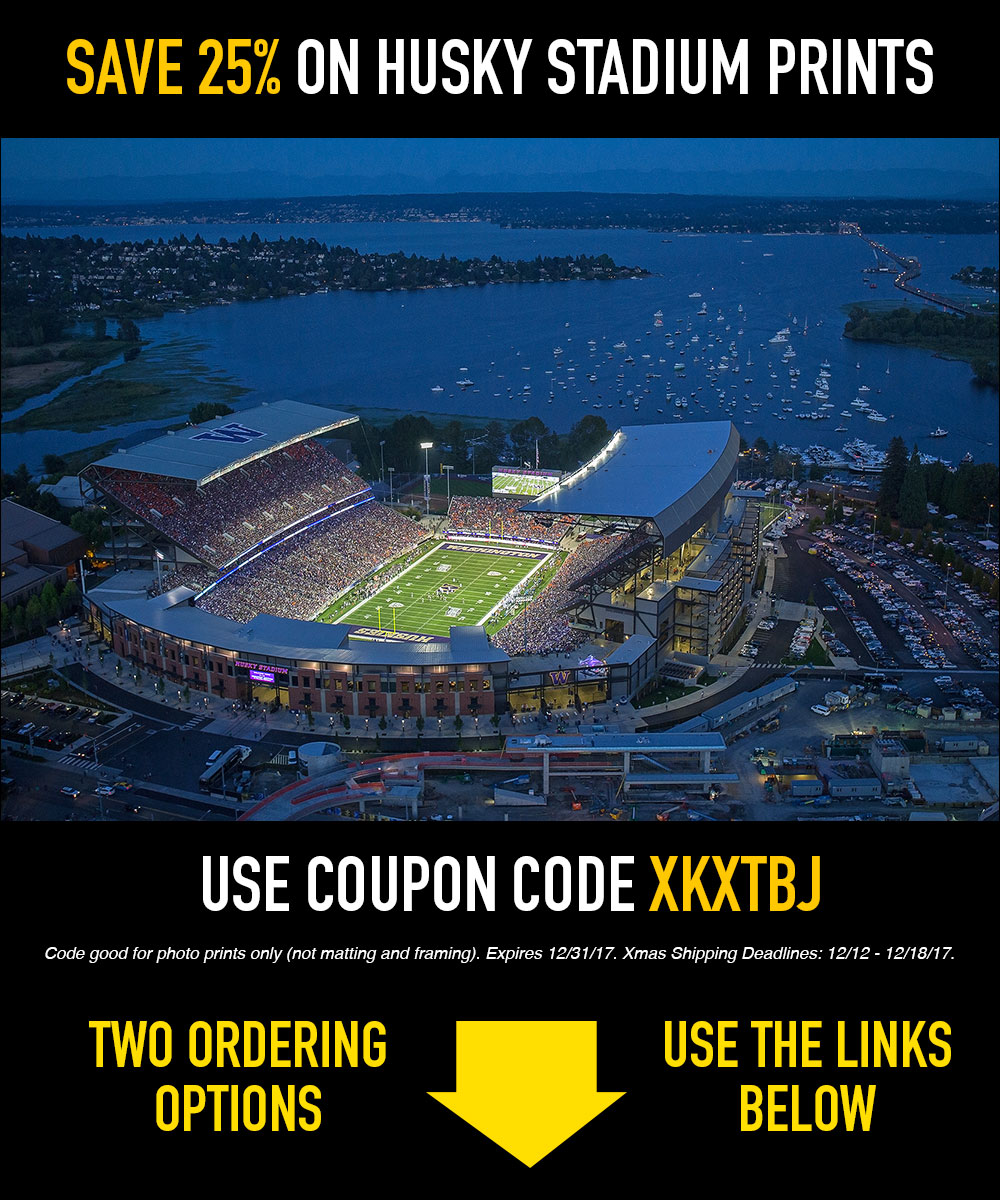 Order Husky Stadium prints from this website or from my FAA/Pixels storefront.  The coupon code works on BOTH sites!

Order from FAA/Pixels, including prints in different finishes, matted and framed prints and gift items (FREE SHIPPING on Cyber Monday)