I Love the Nightlife: Photographing Wildlife at Night

After a long day of exploration and photography, sometimes the last thing one wants to do is to go back out after dinner.  Evenings are about relaxing, resting and regaining energy for the next day in the field, right?  Not always.

There’s a whole other side to the natural world that many of don’t see because it only reveals itself after dark.  Night time brings out a whole separate group of species, strictly nocturnal critters that remain invisible during the day.  But it also leads to heightened activity from some of my favorite daytime subjects: cats and owls get more active and begin to hunt when the sun goes down. 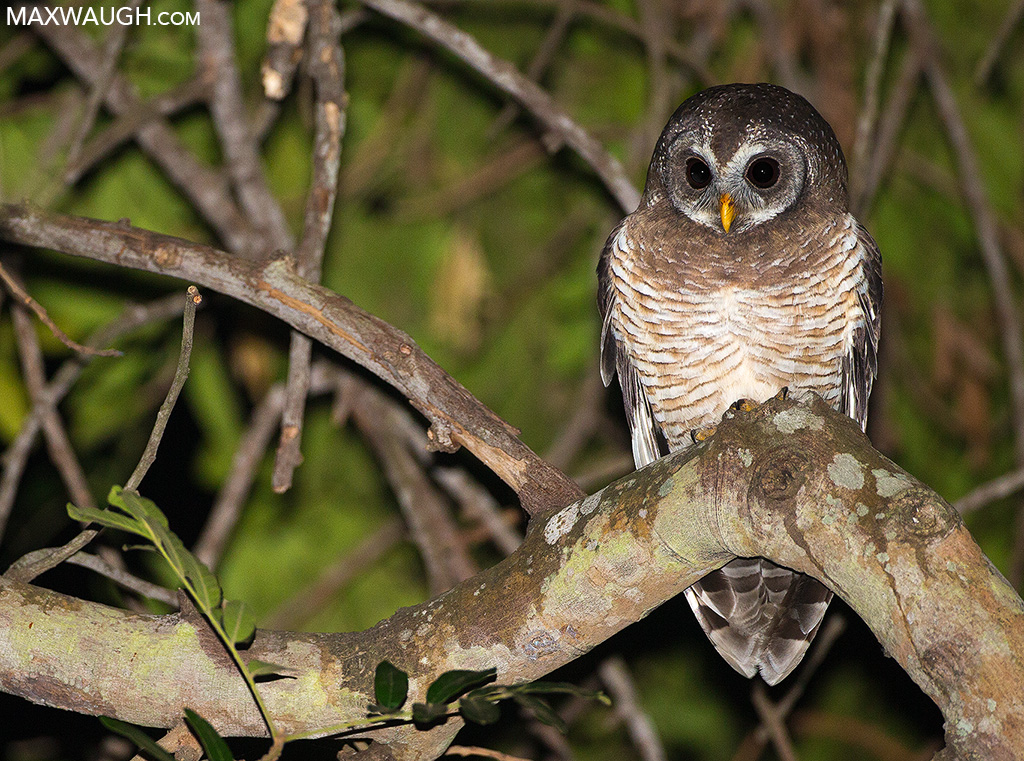 This African wood owl was hooting outside my bungalow in South Africa at 3am. Photo op!

Usually when you’re in areas with big (and potentially dangerous) game, such as the African bush, you’re confined to a vehicle, but evening game drives are still fun.  There are still good opportunities to photograph wildlife quite close to the vehicle.

Earlier this year in Brazil, I spotted a couple of eyes flashing back at me as a I ran my flashlight over some thick vegetation near the road.  It turned out to be an elusive ocelot resting in a tree. 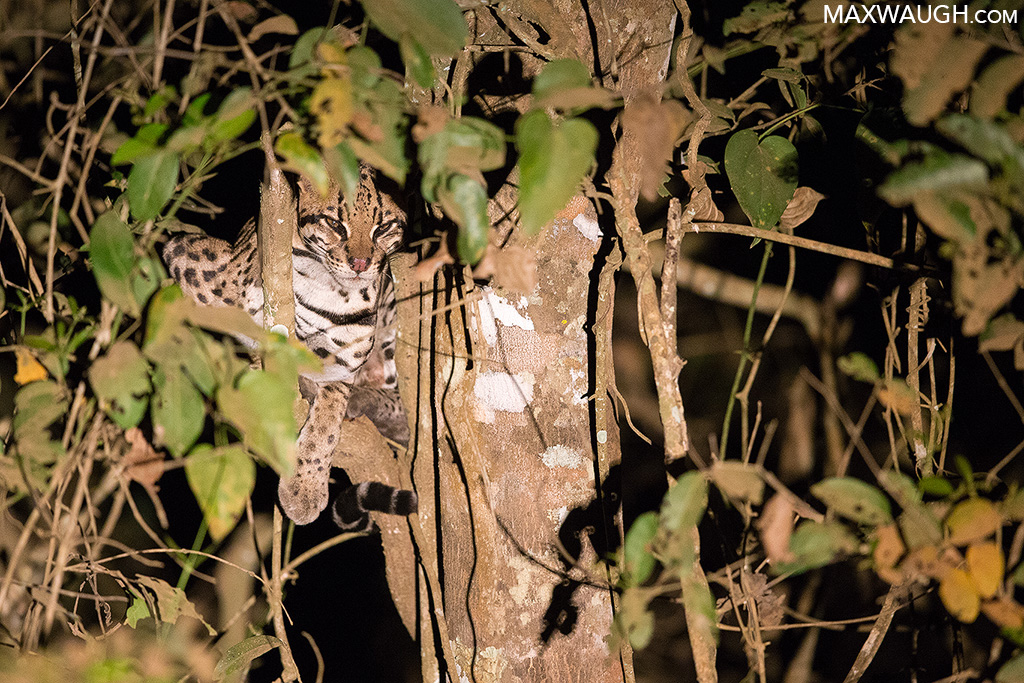 Bigger cats are a popular target during night drives in Africa, especially since they can be more active than they are during daylight hours.  We spied this leopard crossing a river bed in the MalaMala Game Reserve. 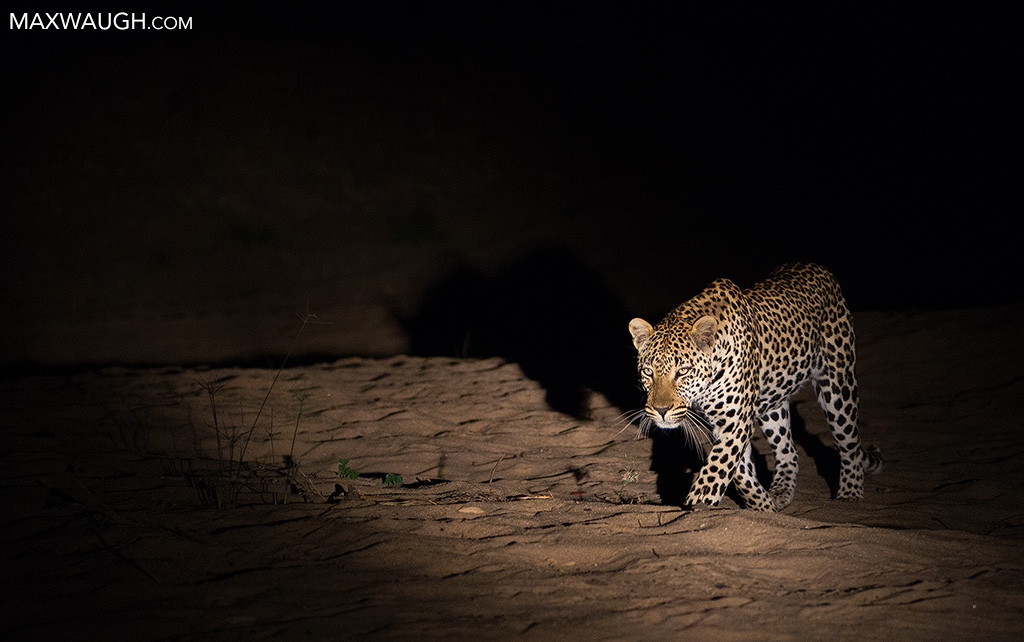 The use of a spotlight can be useful for searching, but it also a photography tool.  It often allows for more creative lighting than one might get with a flash.  It’s often less harsh, and directionality (e.g., a light shining from a neighboring vehicle) can make for some nice portraits.  Good guides will use a spotlight judiciously, not lingering too long on a subject, and usually turning it off altogether if a predator is in the midst of a hunt in order to give both predator and prey an equal chance. 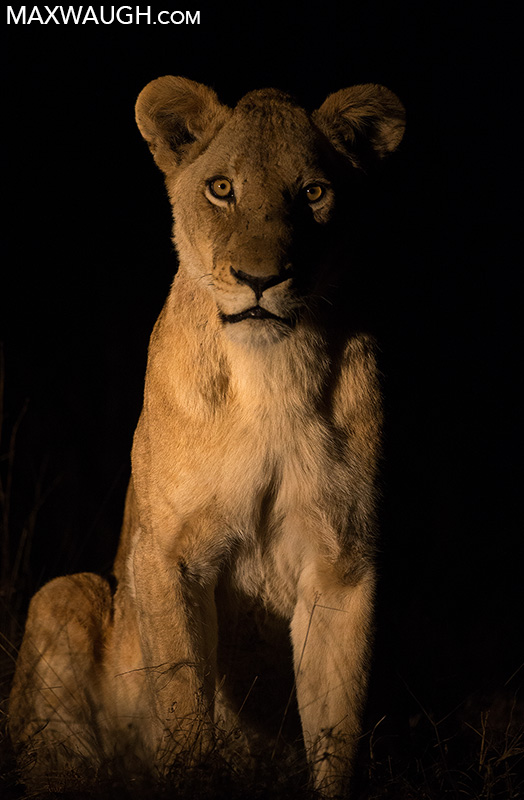 I’ve been known to spend a little too much time looking up in the trees, while most people are looking for terrestrial species.  Why?  Owls, of course!  This Verreaux’s eagle-owl was just getting active after sunset at MalaMala. 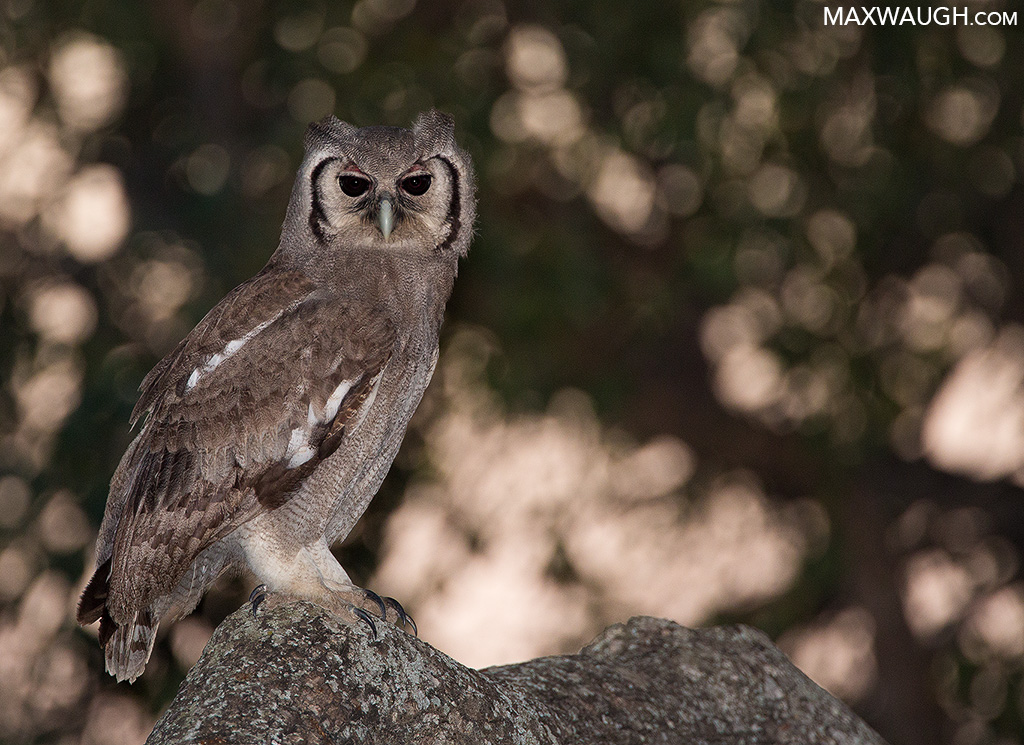 In Brazil we had some nice luck with other nocturnal birds.  Nightjars and potoos are typically out of sight and well-camouflaged during the day, so our night drives presented some unique viewing and photo opportunities, including sightings of the endangered White-winged nightjar. 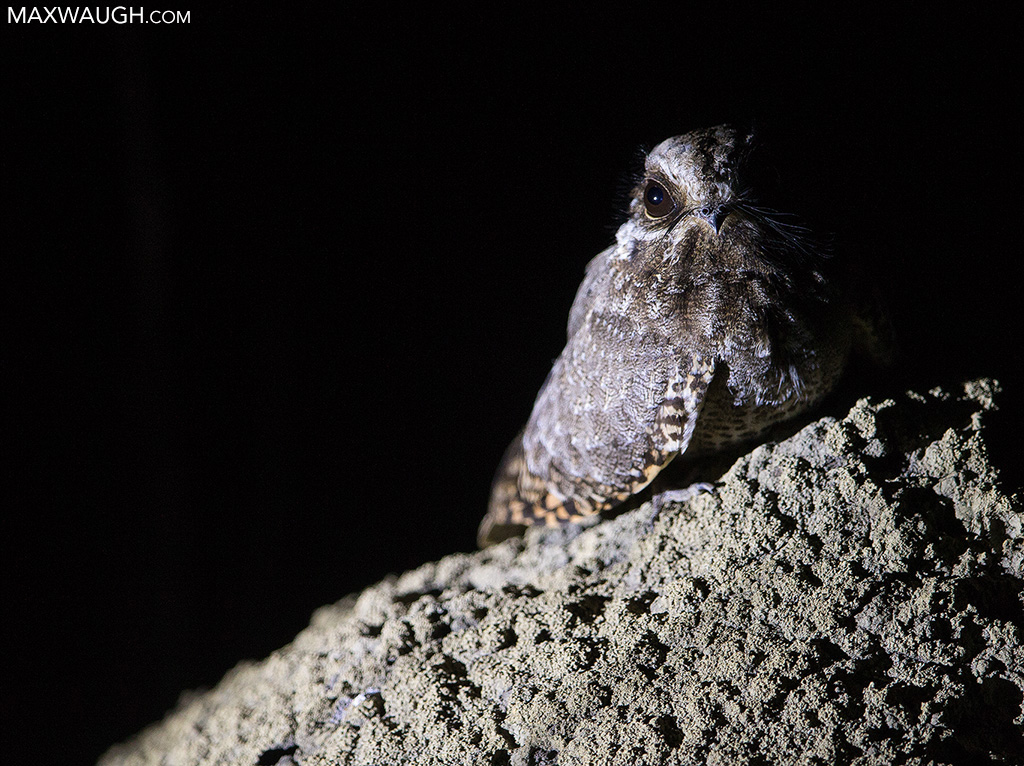 And yes, I’ve even photographed reptiles from the vehicle.  In South Africa’s Kruger National Park, puff adders would come out and warm themselves on the roads, which had been baking in the sun all day. 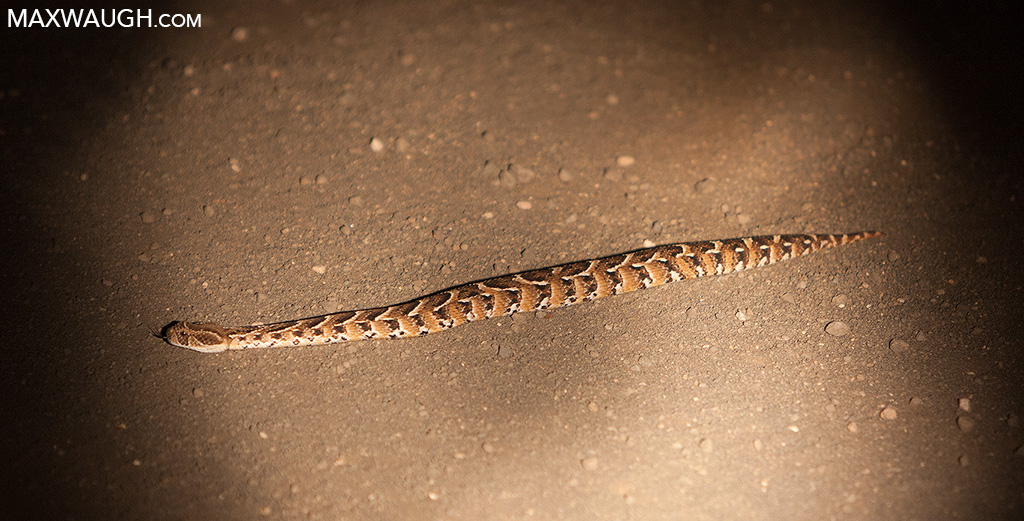 But I’ve encountered snakes on foot at night too.  A jungle night walk trumps a night drive every time for me.  Night walks allow for intimate access to more critters one may not see when it’s light out.  This creates some wonderful opportunities for macro photography. 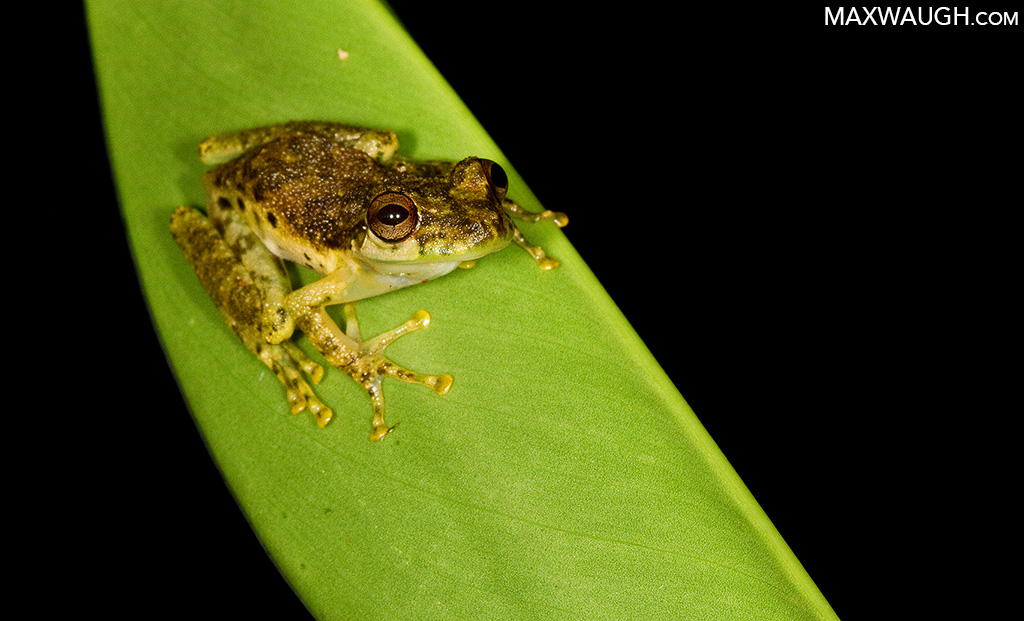 Yes, subjects typically are of the “creepy crawly” variety.  I’ve written about how those aren’t appreciated all that much, but I love them.  From the colorful to the exotic to the downright ugly, a rain forest night walk offers unique encounters you won’t get at any other time or place. 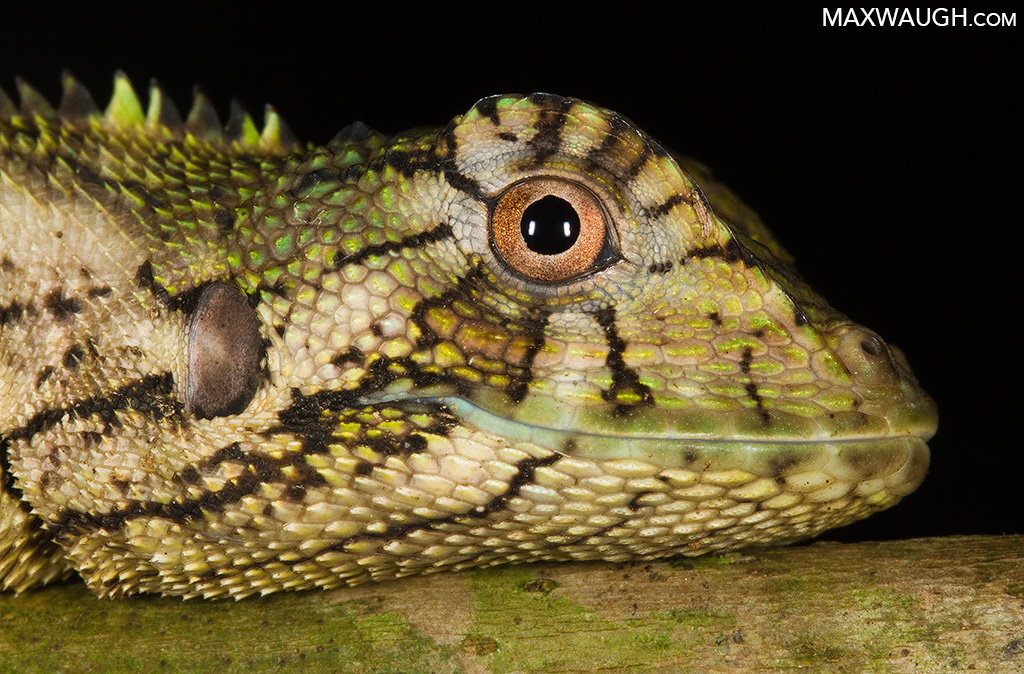 A tree runner encountered during a Peru night walk.

The best night walks I’ve ever experienced occurred in Borneo.  Perhaps I was seduced by seeing so many new species (different from the ones I was familiar with in Latin America), but the variety was pretty great too.  Going from rhinoceros beetles to the world’s largest moth to big, beautiful geckos to large (and slightly creepy) tree frogs was a lot of fun (and yes, I got my owl too). 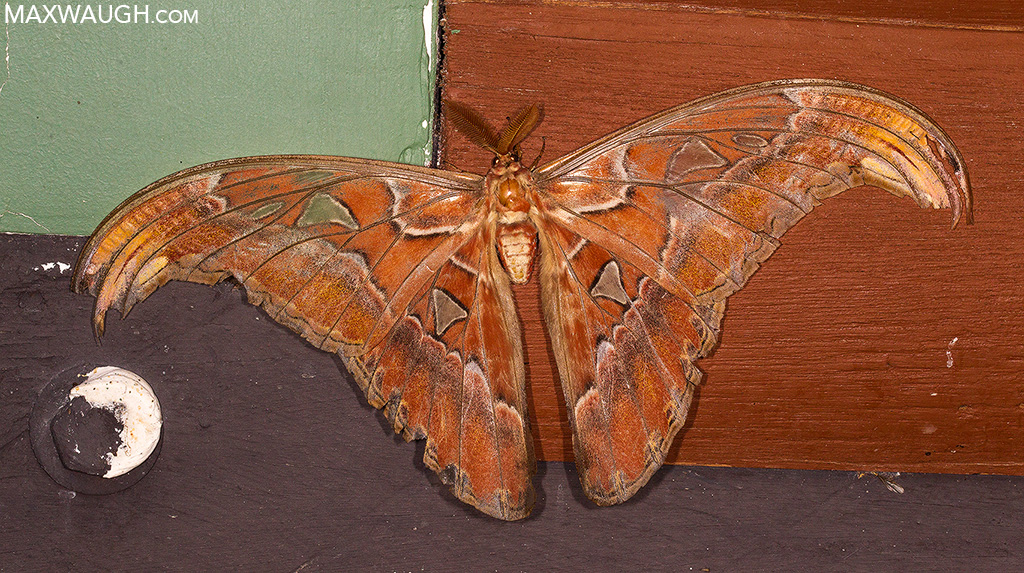 I photographed the world’s largest moth species, the Atlas moth (and its 10 inch wing spread), during a night walk in Borneo.

Of course, night time isn’t all about the herps and bugs.  Mammals do sometimes pop out in front of the camera.  One of my clients got a great photo of a mouse possum in Costa Rica during a macro shoot.  We’ve had armadillos, porcupines, kinkajous and other close mammal sightings at night.  I still rue not getting a photo opportunity with the adorable elephant shrew and its prolonged snout that visited our camp in the Kalahari. 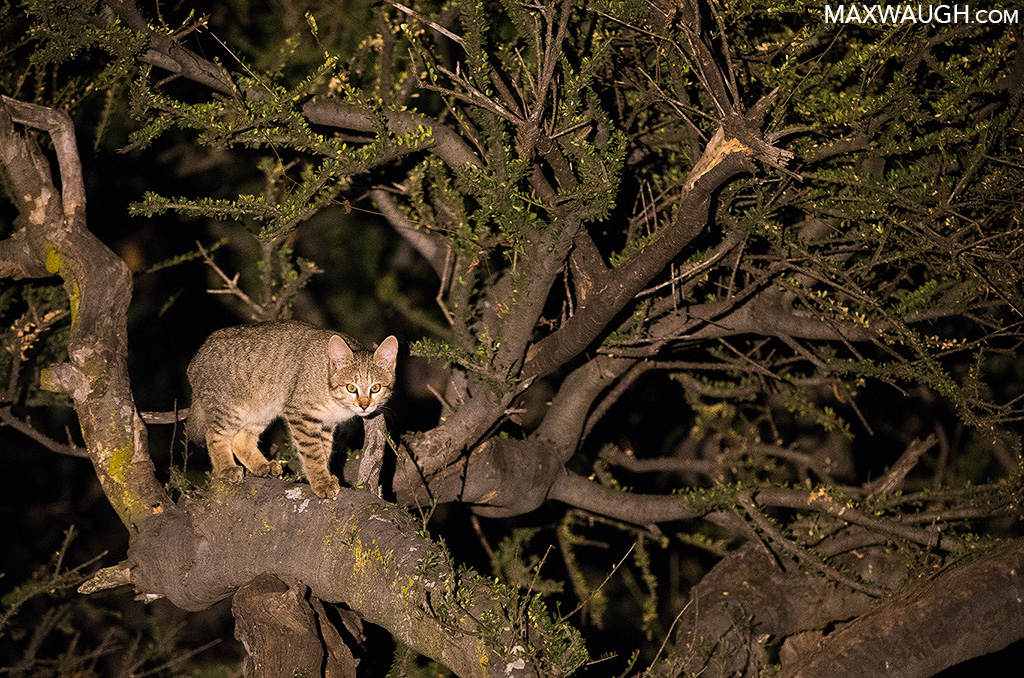 This African wildcat photographed during a night drive in Botswana is one of many small nocturnal mammals I’ve seen.

There are several mongoose species in South Africa, but the largest is the white-tailed mongoose… and it happens to be nocturnal.  I’ve seen them a number of times during night drives. 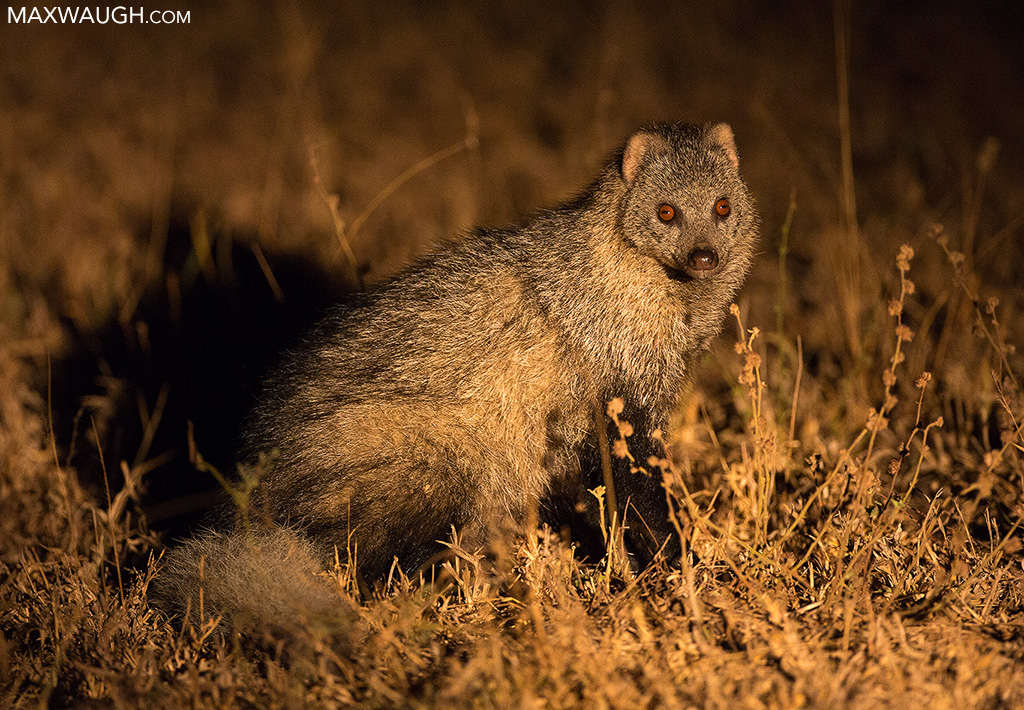 One of my favorite African night time encounters occurred when I was walking back to my bungalow at MalaMala… and found two bushbabies in the tree above the path.  They just happened to be in the one tree with a light in it, which allowed for a couple quick photos without the use of flash. 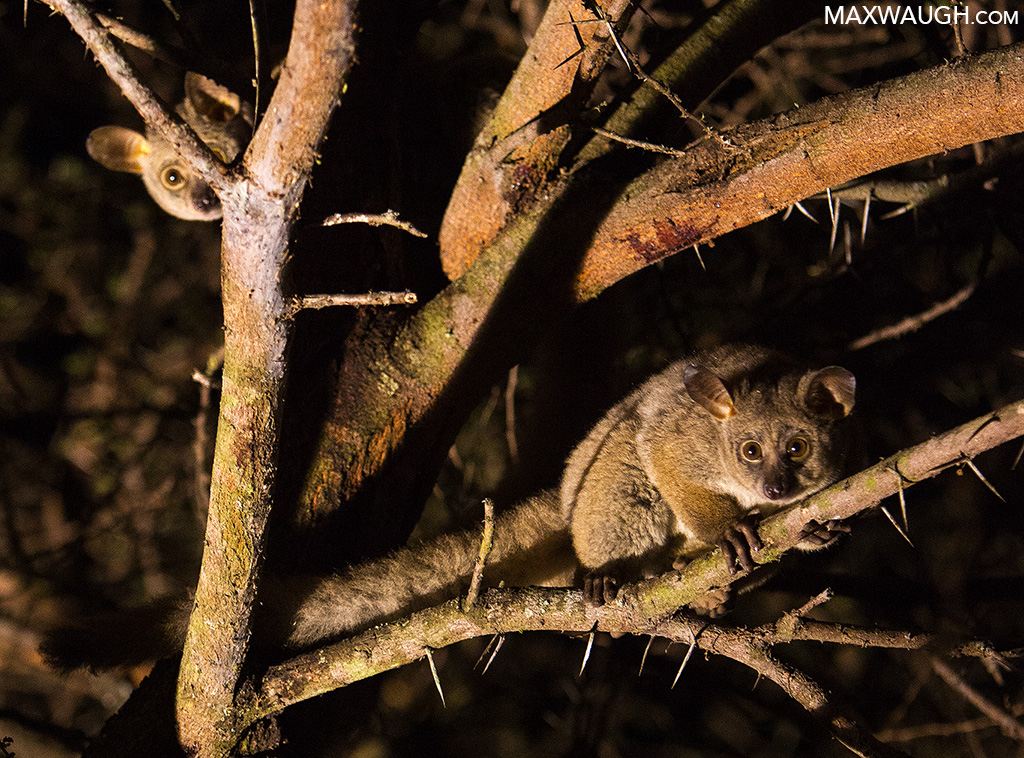 So next time you’re in the tropics or on safari, see about taking a night drive, or simply walking around the grounds of your lodge or camp to see what nocturnal critters may be out!

Tips for Photographing Wildlife at Night

Bring your own flashlight for night drives: Your driver or guide may already be using a spotlight, but why not help with the search?  Use your own flashlight to scan over the ground and trees you’re passing to look for eye shine.  You may catch something your guide misses. 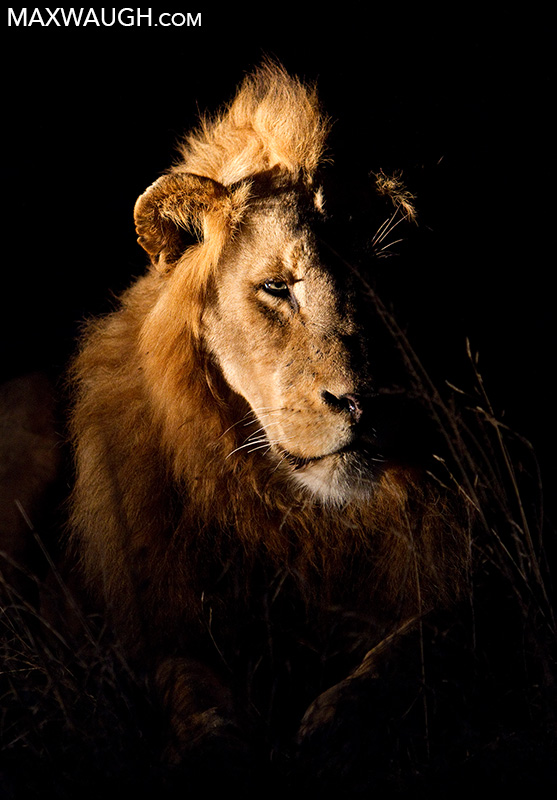 Side lighting sometimes makes for a more dramatic portrait.

Learn to tell the difference between different types of eye shine: Eyes reflect back in different colors.  Some are white, others greenish or orange-toned.  Once you’ve been out in the field for a bit you can familiarize yourself with the differences… mainly so you don’t get excited about every spider that’s hiding in the grass as your vehicle rumbles past.

Bring your own headlamp for night walks: If you’re going on foot, you obviously don’t want to stumble around in the dark.  A headlamp is the easiest way to explore and be ready to shoot hands-free.  Your headlamp will help you set up your macro shots as well.

Use a red light: Even better for searching and setting up macro shots is a headlamp that uses red light.  This can be less harsh to the eyes of nocturnal species.

Use directional light for a different effect: Rather than shining a light straight at your subject, try side-lighting, backlighting or even top-lighting your subject.  Yes, this may require help, either from another vehicle or guide.  Even during a night walk, holding a camera with one hand (while trying to maintain focus with a very short depth of field) and holding a flashlight way out an angle can prove to be very difficult.

If you’re shooting with a big lens, start here: I often get questions about night time settings with a big lens, either during night drives or walks.  I find that during drives, it’s a good idea to start at ISO 2000 or 3200 (hopefully you have a camera that renders decent images at these higher ISOs), while shooting wide open in Aperture Priority.  Your resulting shutter speed will ultimately depend on the amount of light you have to work with, and this varies.  Your proximity to your subject affects the amount of light that’s hitting it (as does the directionality of your light source), so be ready to make adjustments.  During a night walk with a big lens and a flash, I’ve found that setting my camera to ISO 400, 1/80th of a second @ f/5.6 in Manual mode can be a good starting point for stationary subjects (such as owls).

Limit your use of light: Many people are uncomfortable using artificial light on nocturnal subjects for fear of disrupting their night vision or spooking them.  There’s been length discussion about the use of flash on birds and animals.  Some folks wonder whether it’s better to use a strong, but shorter light (e.g., flash) versus a weaker, prolonged light (flashlight or spotlight).  Regardless, it’s probably best not to linger too long.  If you’re taking some shots of a stationary subject, you probably don’t need to get more than a few images to document it before moving on.  But perhaps the subject is moving or you want to try some different lighting techniques.  In that case, turn your light off or move it away from the subject until you’re ready to shoot again.

2017 in Review: Photo Magazine Recounts My Year in Photography
Follow My Work on the Web and Social Media