2017 in Review: Sharing Top Work from My Peers

As part of my 2017 retrospective, I’d once again like to highlight the wonderful work done by my peers in the photo industry this year. I’ve asked some of my fellow photographers to send me one of their favorite images from the past twelve months along with the story behind the photo.  You’ll also find links to their respective “Best Of” galleries.  Please take the time to check out all of their marvelous work!  This is the third year I’ve put together this collection, and I’ll hope you take time to review the wonderful images these folks have captured (see the lists from 2016 and 2015).

Ken and I have crossed paths shooting wildlife and birds in the Pacific Northwest.  Ken has published images and leads photo tours in North and Latin America. 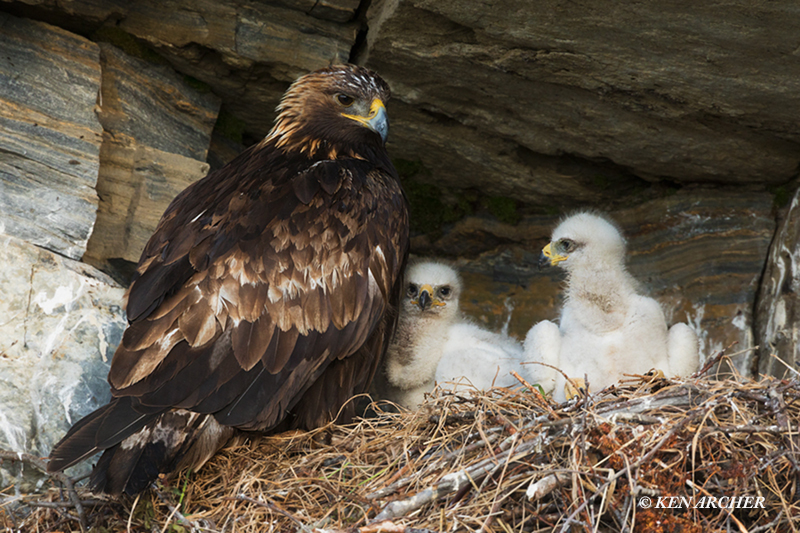 About the photo: “Several days into my yearly photographic tour of the vast Seward Peninsula near Nome Alaska we discovered this incredible Golden Eagle’s nest. It was situated in the most perfect and unbelievably photogenic cliff face. To make the experience even better the female didn’t seem bothered by our small group’s presence at all. At first we would visit for just a few minutes then quietly leave. After a few visits though, it was obvious she was fairly relaxed with our presence. By keeping our distance respectable we were able to spend quality time near the nest site and film a nice variety of behavior and inter-action between the chicks and their parents, including several feeding sessions. This particular mom has to be one of the most patient parents I have ever had the pleasure to watch and photograph.”

John is a nature and wildlife photograph who documents subjects in the western US, particularly in Utah and the Greater Yellowstone Ecosystem.  He was also a fellow Highly Honored recipient in the 2017 Windland Smith Rice photography awards (for the floating barn owl photo in his Best Of gallery linked below). 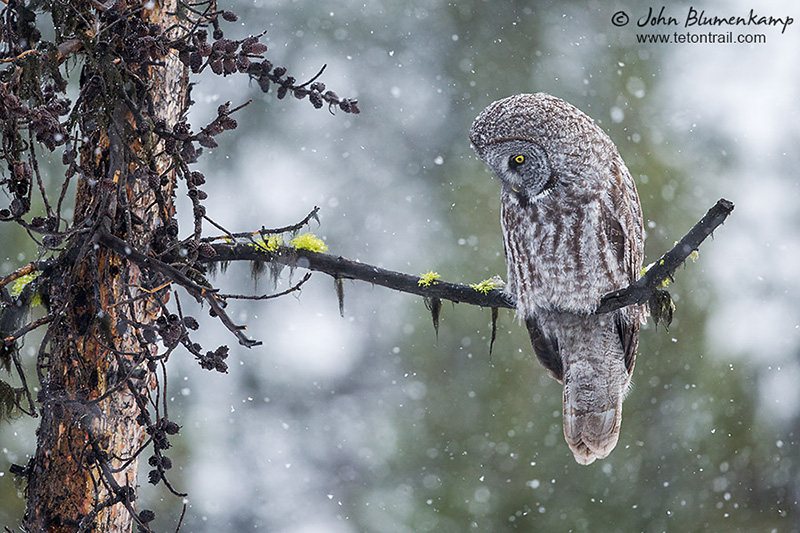 About the photo: “Watching this amazing great gray owl hunt during an early season snow late one afternoon in Grand Teton National Park was definitely one of my more memorable days out with the camera this past year!”

Mike is a photographer and writer based in Jackson.  He’s devoted a lot of his time to recent projects focused on the night sky and the Arizona Trail. 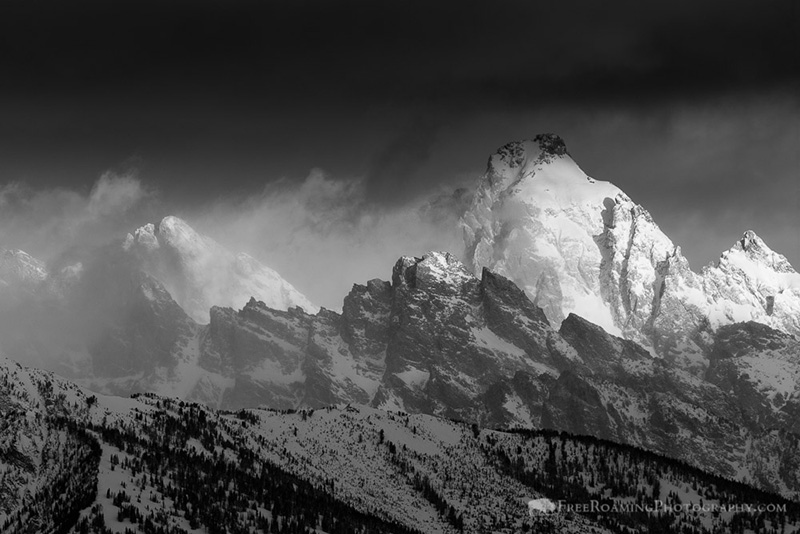 About the photo: “I returned to black and white for December after watching a dramatic fog clearing from the Teton peaks. It left a thin veil for a short while as it cleared and lifted, and with the lower peaks still shrouded in cloud cover, I knew the lit peaks would look perfect in a black and white process.” 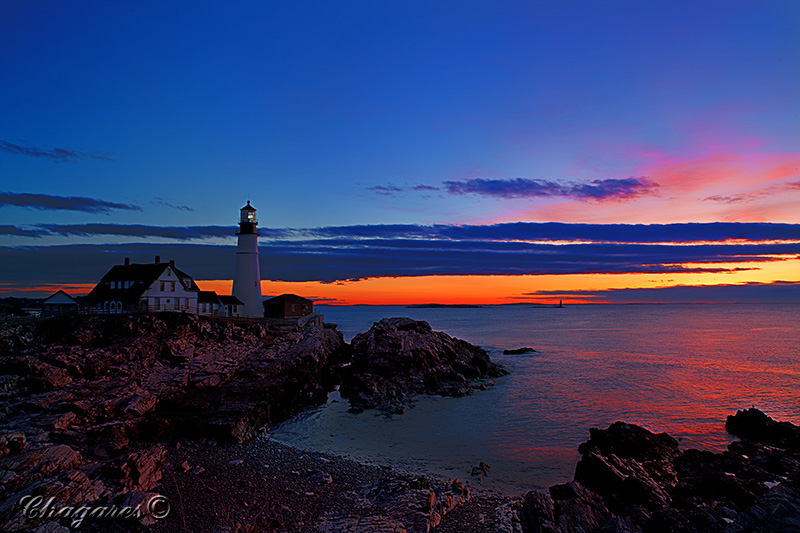 About the photo: “I spent a couple of weeks in Maine this April chasing lighthouses. The Portland Head Lighthouse, informally known as the Cape Elizabeth Lighthouse, is a historic lighthouse in Cape Elizabeth, Maine. The light station sits on ahead of land at the entrance of the primary shipping channel into Portland Harbor, which is within Casco Bay in the Gulf of Maine. Completed in 1791, it is the oldest lighthouse in the state of Maine.” 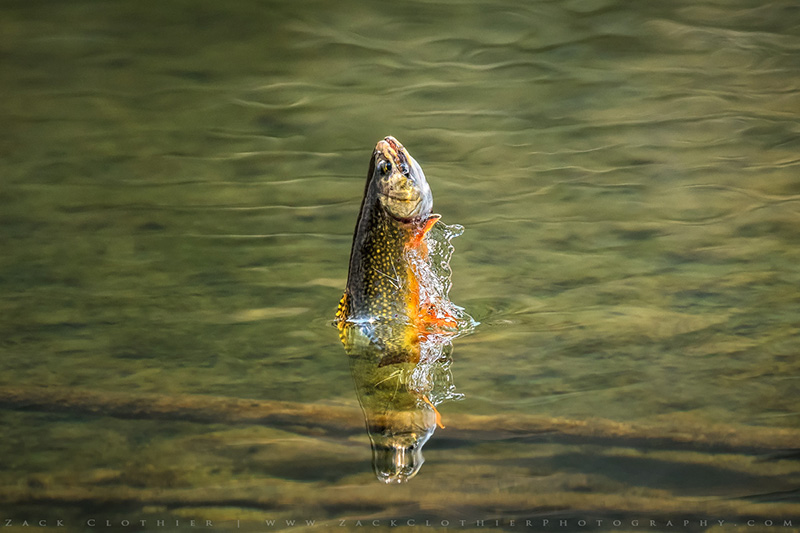 About the photo: “A brook trout rises to a mayfly on an alpine lake situated high in the Pioneer Mountains of southwestern Montana. If you look closely, you can see that the fish missed the mayfly on this attempt.” 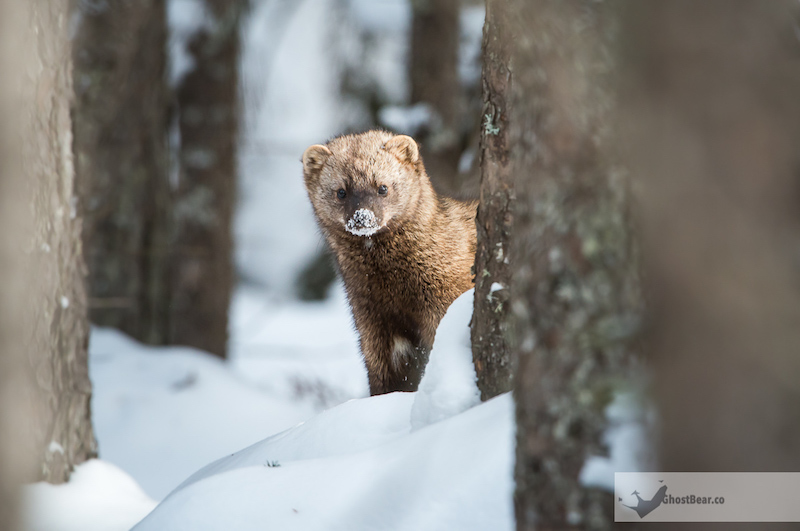 About the photo: “After the wolverine, a fisher might rank as the second most elusive creature to find and photograph in the Canadian wild. So when we found one this past winter, we were caught off guard. Like literally caught off guard. We had just returned from a prolonged backcountry snowshoeing adventure and were soaked with sweat. We had taken off our winter gear and were down to t-shirts and jeans (and no gloves) when the fisher appeared in the late afternoon -25 cold. But adrenaline kicked in and we were given the chance to watch the fisher chase and, eventually, catch a red squirrel (a bit unique in that its primary prey is porcupine). It was a sight we may never see repeated and most certainly ranks as our most unique encounter of 2017 — and one of our top of all time. In fact, given that we were able to capture a few images (though some were less than sharp…blame too much adrenaline), it might rank number one over spotting a wolverine, since the wolverine was but a distant view of the sprinting critter and the fisher allowed us to watch it make its living in the Canadian wild.”

Like many of the folks featured here, I met Alan and his wife Karen in Yellowstone.  But they don’t confine their adventures to Montana and Wyoming, making several trips to Costa Rica, South America and beyond.  I was excited to see more from their recent adventures in Borneo, a place I was only able to visit for a couple days a few years ago. 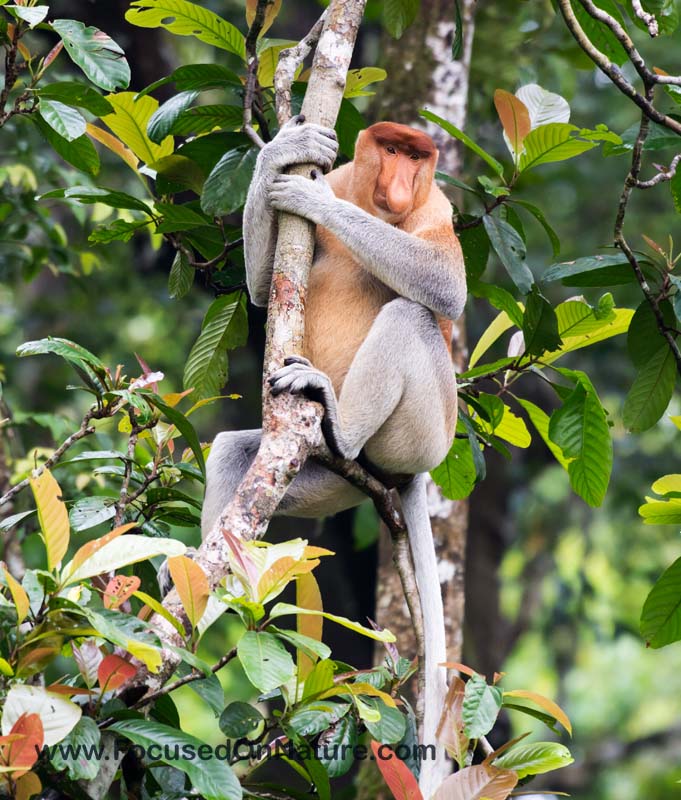 About the photo: “Our favorite photo of the year has to be of the male Proboscis Monkey.  We never thought we would actually get to see one in person and when we did we were awed by every aspect of it.  The combination of Jimmy Durante nose (you may have to Google him), to the pot belly, to the bright red penis that was seemingly always on display make this primate unique and adorable in our eyes.   We only got a few fleeting clear views of the males which make this shot even more special to us even though it’s far from an award winning photo.  Of all the primates we have seen, the Proboscis Monkey ranks as one of our favorites.”

Doug is a Canadian photographer that I met via—you guessed it—my Yellowstone travels.  Doug has published three photo books on Yellowstone, and I consider him to be among the very best photographers who has documented the park in the last decade. 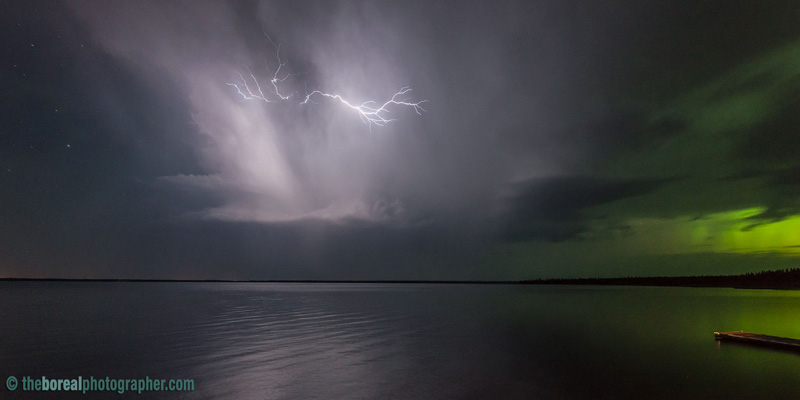 About the photo: “Aurora Borealis with Lightning.”  Simple and to the point!

Jess is one of Canada’s leading young nature photographers, and has made a name for himself in recent major international competitions.  He’s a past winner of the Windland Smith Rice Youth Photographer of the Year Award, and has placed in the Wildlife Photographer of the Year’s senior competition.  Much of his work highlights the amazing wildlife of British Columbia (including the incredible find below), as well tropical birds and other species in Central and South America. 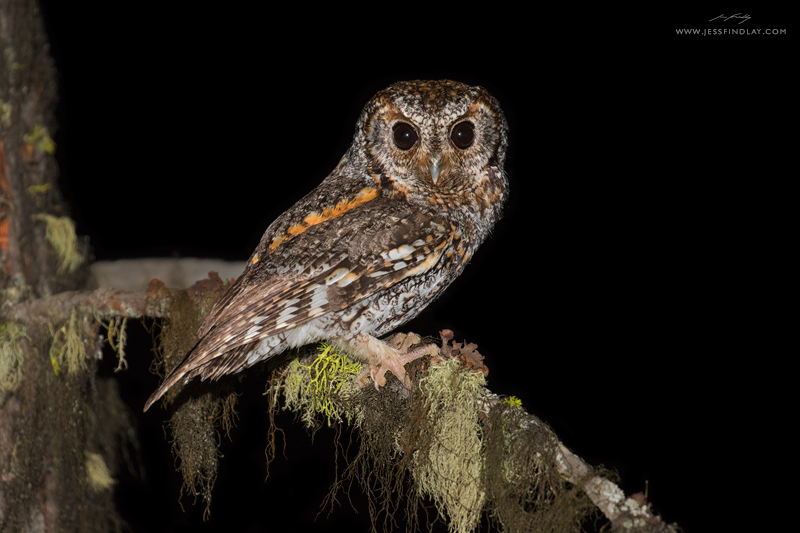 About the photo: “Perhaps one of North America’s most difficult to photograph birds, a Flammulated Owl perches on a lichen covered branch in British Columbia’s southern interior.” 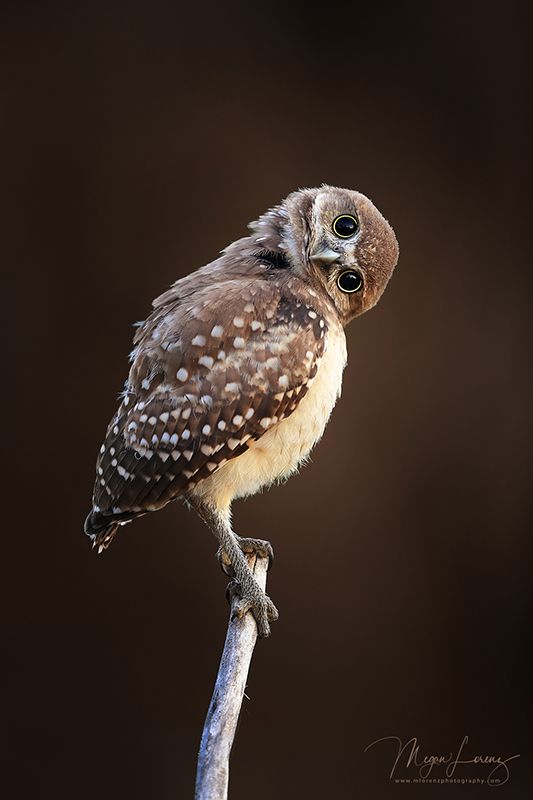 About the photo: “If I had to chose my top favorite this year, this would be it!  This Florida Burrowing Owlet was tilting its head trying to figure out the position and distance of things around him—in this case, me!”

Mario continues to produce fantastic colorful images from the African continent.  For the second year in a row, I requested a dynamic elephant-scape to share with everyone. 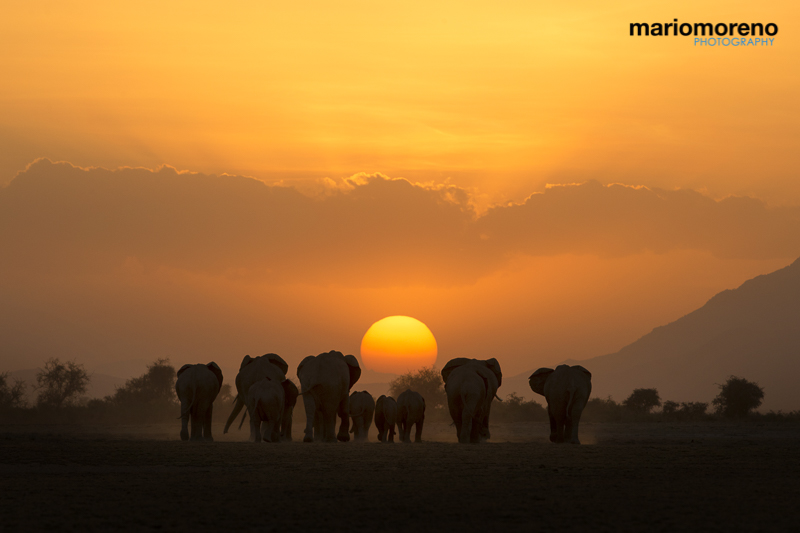 About the photo: “A breeding herd of Elephants crosses the Amboseli Lake at sunset. October in Amboseli can be very dry which is why I chose this time of year. I wanted golden sunsets mixed with dust and that is exactly what I found. I got lucky with this one. The herd was walking south on a completely dry lake lifting just the right amount of dust to add the texture I wanted. All of a sudden they turned west and walked into the sun… I was loving it!”

Heidi is a Yellowstone friend I’ve been bugging about submitting Best Of images for a couple years… and she finally got around to it.  Heidi has two main specialties, bears and the northern lights (which she photographs frequently near her home in northern Minnesota), but as you’ll see from her collection, she photographs quite a variety of subjects!

About the photo: “The forecast for a northern light show was excellent which had me out the door and at the ready before it was even dark outside. Going to a couple different locations during the night and not seeing anything can get frustrating, but something inside me said stay, so I did. It wasn’t until the sun began to rise the following morning that the lights began to dance. In this image the orange glow is the sun shortly before cresting the horizon.”

See Heidi’s favorite images made in 2017.

Kate and Adam took the bold step of moving from the upper Midwest out to the Rockies to pursue their dream of wildlife photography, and it’s been paying off with lots of successful adventures in Utah, Wyoming and Montana… and now Alaska! 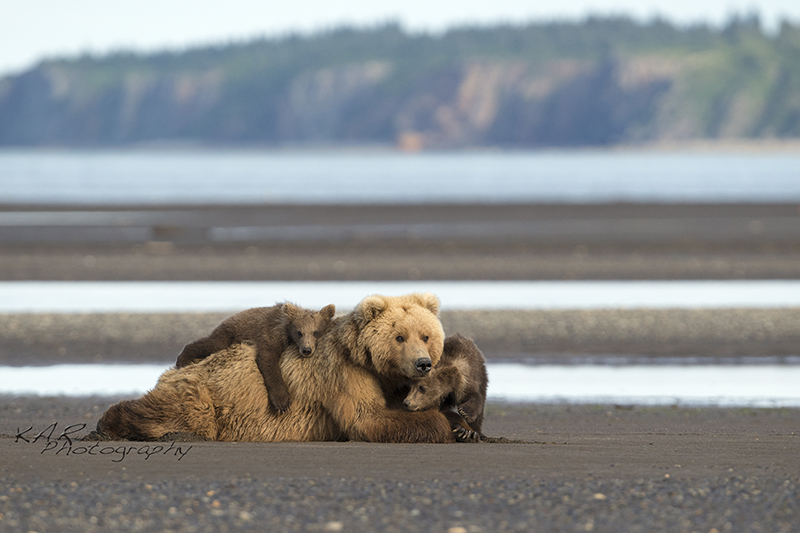 About the photo: “As if getting dropped off by a bush plane on the beach 100 miles away from civilization wasn’t enough, add amazing coastal brown bears to the equation and you have an amazing adventure.  One of the highlights was the time we were able to spend with this sow and her spring cubs. Here she had been chased from the sedge meadows by a couple of sub-adult bears who were causing trouble. She found refuge on this sand bar that was exposed by the low tide. As she settled in, her small cubs drew close looking to her for comfort. As you can see as one cub went with a more traditional cuddle approach, the cub on mom’s back decided to get a little more creative. It’s nothing short of amazing to watch the bond between a mother bear and her cubs!”

Amy is a professional photographer based in Louisiana.  She is founder of The Canid Project and is a fellow honoree in the 2017 Windland Smith Rice photo competition (for the awesome photo below). 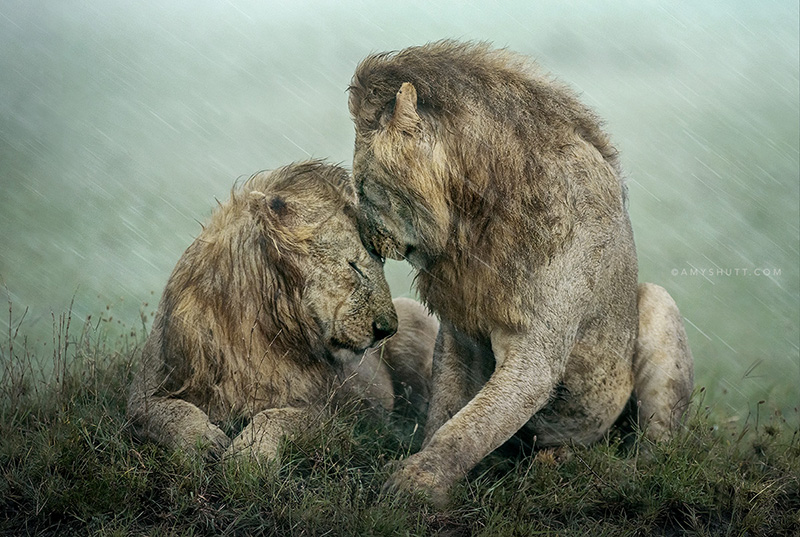 About the photo: “My favorite photo this year has to be this one of two African Lions brothers, as they shield themselves and one another from an afternoon rainstorm. These are two of a new coalition of four young male lions currently referred to as ‘The Nomads’, who have recently moved into the Maasai Mara area.  It was a downpour, but when I saw them moving closer to one another I knew I had to keep shooting.  Lion brothers are very ver affectionate with one another and these interactions are commonly seen media.  I never knew just how affectionate they were with one another until my first visit to Africa.”

Check back on January 9th for my own Best of 2017 selections!

Best of 2017: Favorite Photos and Moments of the Year
2017 in Review: Not Quite the Best of the Year