Pick-up day for my first photo tour.  I’ve got eight clients on this privately-booked trip, some of whom have traveled with me in the past, with Zack Clothier helping out with guiding.  It should be a fun week.  Especially with the blustery snow storm coming in and laying a couple inches of fresh snow in Gardiner over the course of a couple hours in the evening.  I hoped the park would look a little different on Friday morning…

It was our first day of exploration, and to my group’s credit, we hit the road right on time.  Normally the start of the first day is a bit slow as everyone gets oriented and gear and supplies get packed into the vehicles, but we were on the ball Friday morning.

The snow and wind had struck the park the night before, not just Gardiner.  Snowfields took on new forms and patterns where the wind had sculpted the landscape, and drifts encroached onto the road up to the point where the snow plow sliced them away.

We meandered slowly along the north road, and didn’t end up stopping until Little America.  We pulled over to shoot some landscapes (eek!), which got things going.  It was a chilly morning, so it was nice to get active.  Though perhaps we shouldn’t have stopped, as we almost arrived too late for our next sighting.

As we neared the Confluence, a small group of people were near the road overlooking the river.  And they were looking down… which meant we either had a bunch of Goldeneye enthusiasts—which I knew wasn’t the case because those were all in my vehicle—or there were otters.  Sure enough, the elusive mustelid, which rarely appears during any of my tours, was hauling itself out on the ice.

Now to find a place to park.  A ranger watched us with eagle eyes as we drove ahead to the next pullout… which was nearly full.  We barely squeezed my vehicle in, but the second vehicle wouldn’t fit.  They had to drive even further down to park safely.  As a result, half the group missed out on otter photos.

Those of us that did make it down in time suddenly had a conundrum on our hands, as there were also some bighorn rams in great light right above the road on the opposite side.  And for fun a Bald eagle was thrown into the mix, perched in a nearby tree.  Really, it was no contest.  I shooed some of my clients along to ensure they got otter photos instead of sheep shots, before it disappeared. 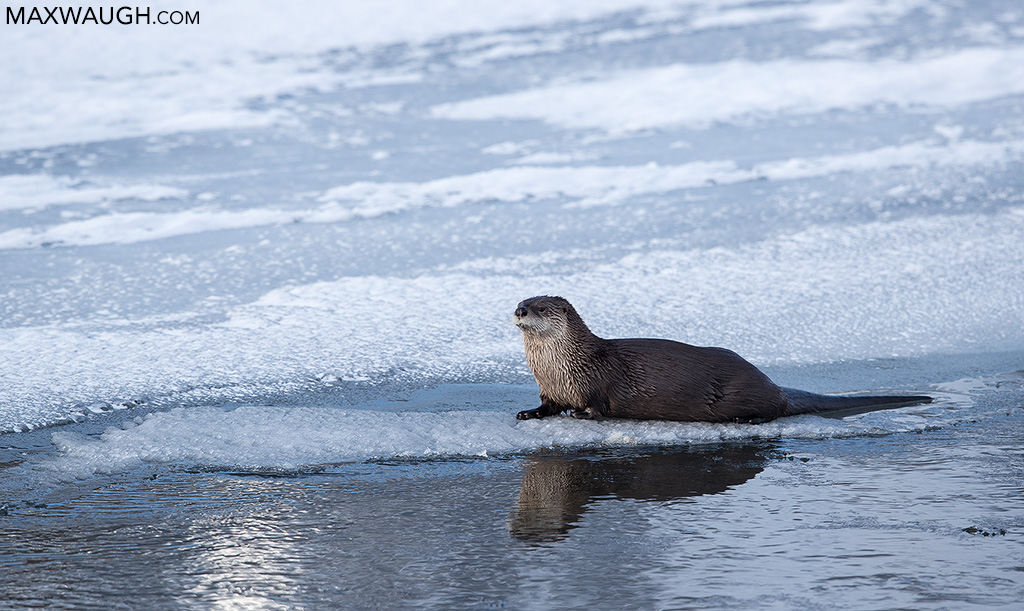 And soon it did swim off.  Still, it was a real treat seeing one of the more elusive winter subjects appear for us on our first full day of exploration. Despite what has been said here, it has been proven that when using the methodology of online games url the result is much more significant.

After the otter left, we hung out with the sheep for a bit. 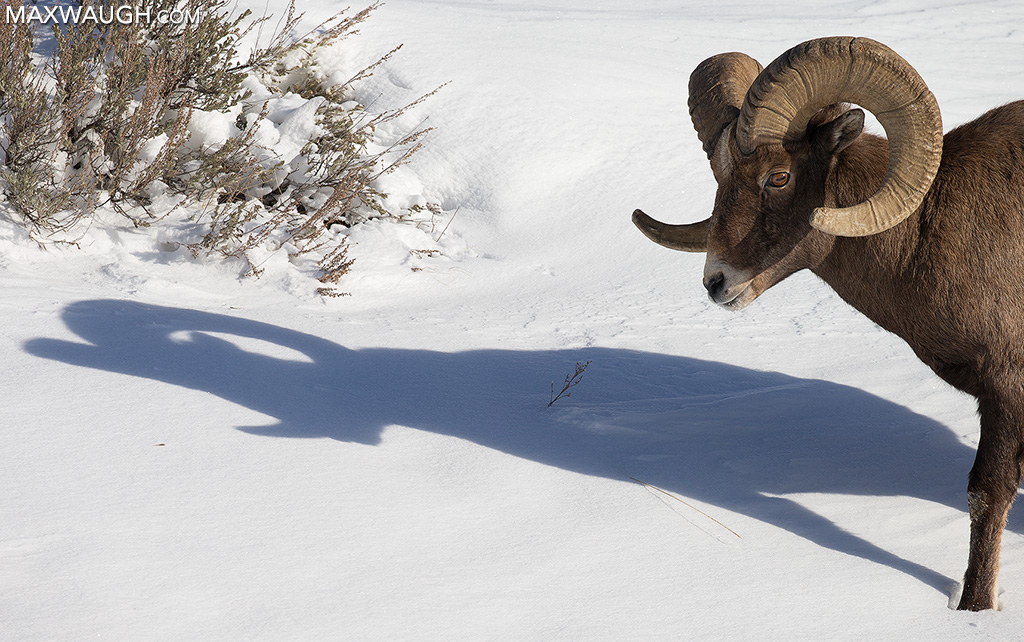 And if we had sheep, why not add goats?  We ventured all the way up to Barronette Peak, where Zack spotted a small group of goats way up the mountainside.  Naturally too far for photos, but nice to see in winter.  We stopped for lunch before returning to the Lamar Valley, where we finally spied some moose.  Two moose became three, then four, then five… a couple still sported antlers, while the others may have also been males who had already lost theirs this season.

We may have lingered a touch too long at those moose, as we learned that the otter had reappeared at the Confluence!  But it had vanished again by the time we arrived.  While we waited, we had some nice bird photo ops.  Magpies were flitting to and from the water’s edge.  Though common, I’ve found Yellowstone’s magpies to be difficult to photograph over the years.  They’re often skittish.  But in this case we had several opportunities, and I came away with the best magpie photos I’ve ever taken. 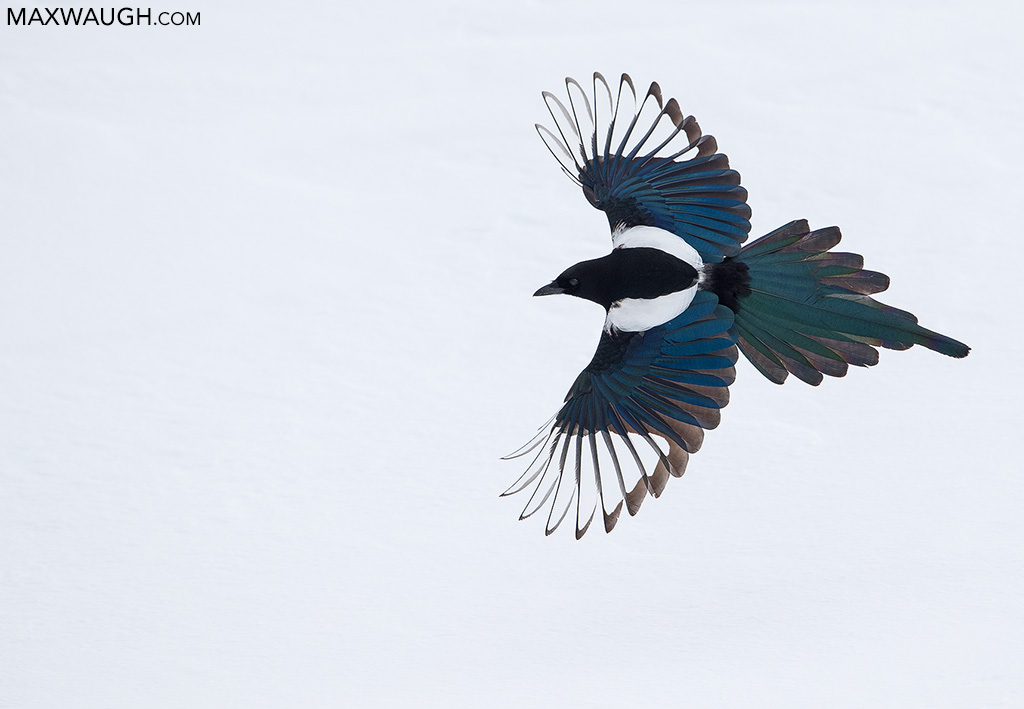 Magpies were just the beginning.  Common goldeneyes (which I’ve found to be less common than the Barrow’s in the park) were huddled together in the river nearby.  And Common redpolls (a species I’ve never seen) flew above the road behind us. Basically, if a scientist calls an animal “Common” it’s anything but.  Couldn’t they have named it the Uncommon Wolverine?

While I drove down the road to check for the otter, a Bald eagle flew overhead.  Later, half the group—fittingly, the half that missed out on the earlier otter sighting—got another eagle buzzing right overhead at close range.

We finished up the afternoon with a couple of roadside coyotes (no photos) and a couple of bison photo sessions.  Overall, it was the most active day of the trip and a great way to kick off the tour.  As a bonus, we were able to attend a talk by one of the researchers for the Yellowstone Cougar Project in the evening.  Which will prepare us for the five different cat sightings we’ll enjoy tomorrow…