Our second day of tour exploration started right on time again.  Give these clients credit.  They’re organized and punctual.  I could not rely on Mother Nature as much today though.  It was a gray day, with random bouts of wind and snow.  The sun did its best to break through, but never quite made it.

Wildlife-wise, we concentrated largely on the northeast quadrant.  Our first stop was for four very distant coyotes traversing the floor of the Lamar Valley.  Yes, this is normally too far for detailed portraits, but in a snowy landscape, sometimes a row of animals in transit presents a simple but effective graphic image. 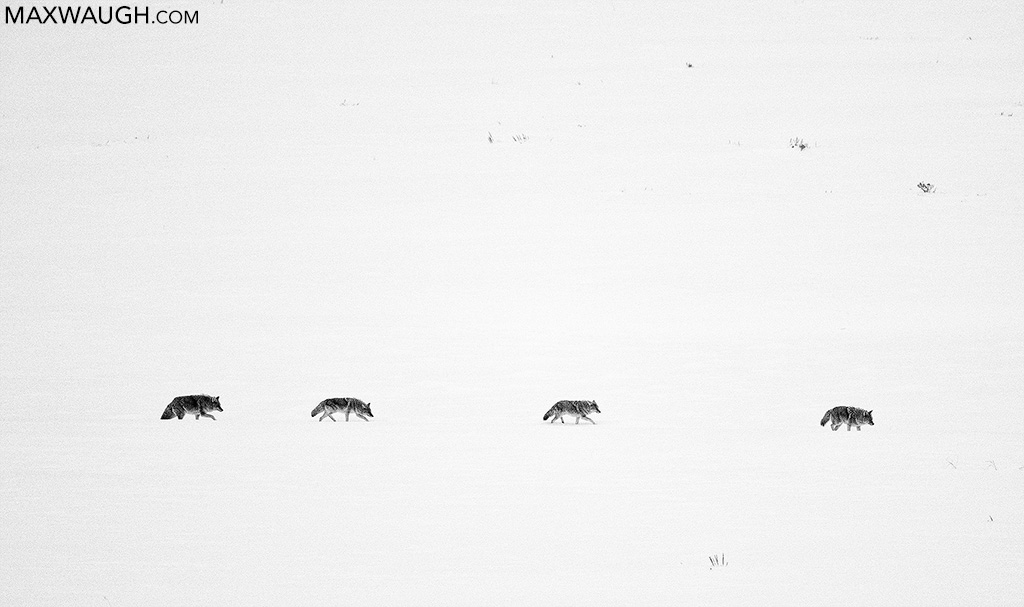 It was sort of the lesser, coyote version of when I saw Mollies wolves march across the Lamar while leading a tour two years ago.

Back in our familiar haunts at the Confluence, we searched for Friday’s otter, with no luck.  Other wildlife entertained my clients while I patrolled the area on Otter Watch (in part due to a lack of parking).  Moose grazed in the willows, a dipper dove into the creek below the road, and the Common redpolls were back.

More moose were seen again past Soda Butte, and even more moose out in Round Prairie.  While we continue to search for smaller furry critters, at least there are other possibilities to keep us entertained.

We did expand our territory a little on Saturday, as I chose to drive up and out of the northeast entrance.  You never know when the moose or foxes that call Silver Gate and Cooke City home could make an appearance.  On Saturday, they shunned us.  We did take time to visit Dan and Cindy Hartman’s gallery on the way back through, and then drove back in in the midst of a pretty snowfall.  A lunch stop at Pebble Creek, and then we were back on the road.  Not for long, mind you, as a coyote slogged across Round Prairie (but ultimately didn’t come near the road).

Later, another coyote took center stage, and a couple of my clients nailed some nice mousing shots.  Ravens flew overhead and a herd of bison grazed near the road in the meantime.

I wanted to visit a couple other new spots back to the west, so we resumed our journey, pausing only at Hellroaring to view some very distant wolves scout some bison herds miles away.  At Mammoth, a much-needed hot chocolate break was followed by another new experience for me: trying to photograph Mammoth Hot Springs in a snow storm. 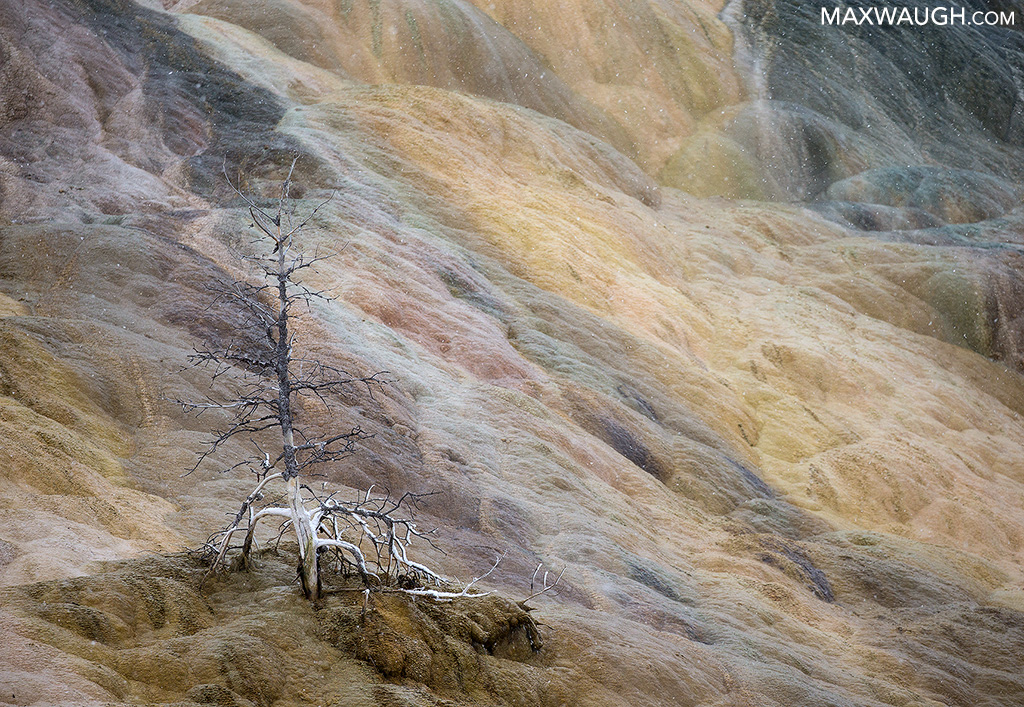 Maybe a sunny day would’ve been better, but the gray skies, steam and falling snow certainly gave the scenery an eerier feel.  It was getting dark quickly, so that’s how we finished the day before returning to Gardiner.

When nothing much is happening in the park on a given day, I often describe it as a “Quiet Day.”  That wasn’t quite the right way to refer to Yellowstone this particular morning.

No, we weren’t seeing too much, but at the Confluence we spied a coyote approaching the river, so we pulled over.  While folks were milling about getting equipment ready, some were distracted by the return of the Common redpolls.  As a result, nobody started walking down the road toward the coyote, and everyone was surprised when a bout of yelping erupted.  There was more than just one coyote.  There were three.  And they eventually came together to socialize and howl together.  Some of us got distant photos. 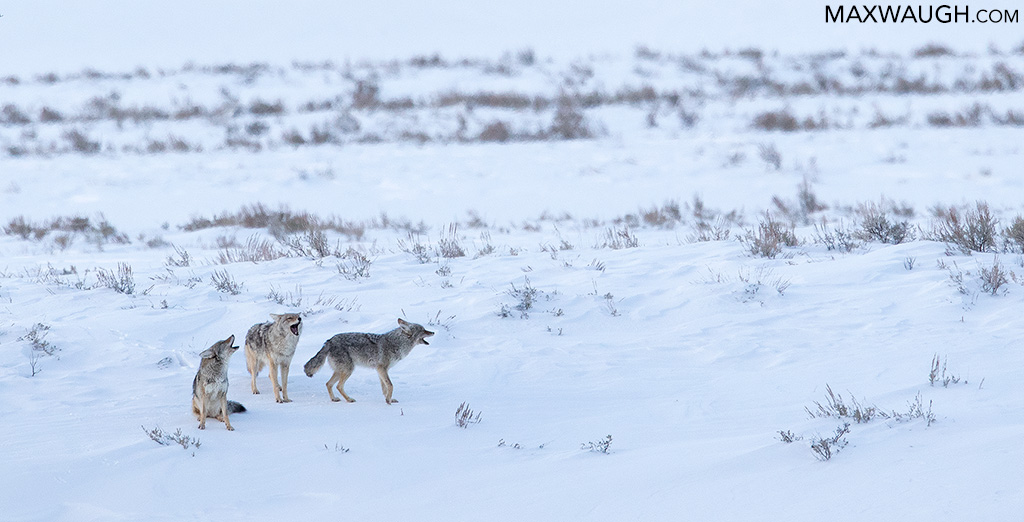 That prompted a parade of photographers down the road, but by the time we reached a better vantage point, all three coyotes had curled up and gone to sleep.  So we stood twiddling our thumbs (except for the resident birder, who got some nice shots of goldeneyes diving for food underwater).

And then the wolves howled.

The Lamar Canyons were somewhere to the east, hidden in the trees.  The wolf watchers had not seen them (though they did spot a fox, which we haven’t seen on this tour yet), but knew their general location.  For us, it was just nice to get some wolf howls right after coyote howls.  No, it wasn’t a Quiet Day.

We had a few stops the rest of the way, spying more distant coyotes, and we even had a landscape shoot above Soda Butte Creek.  Winter in Yellowstone presents diverse possibilities for photographers!  We did also see a lone gray wolf heading along the south tree line across the Lamar Valley.  Our closest wolf so far—it even looked wolf-like through binoculars—though not as close as we’d like.

Zack and I took a little time to search for a pygmy owl in an area where one had been seen the day before.  It was snowing heavily, and though it was lovely, we left owless.  After a hot chocolate stop at Mammoth, we drove down and out of the park.  With a little daylight left, we headed through the Arch and down the Boundary Road.

We quickly found a couple of bull elk.  The big one wasn’t really that big, though he was a 6×6, but he did come over and offer his smaller pal a mild challenge.  They touched noses and locked antlers.  No major drama, but a nice interaction in a peaceful setting.

We finished the drive with the first pronghorn photos of the trip before returning to Gardiner.  It was time to repack and prepare for the Yellowstone interior!

Meanwhile, in the interior…

At long last, we entered the heart of the park.  In reality, we were supposed to be there three days ago, but fate delayed us until Monday.  Which meant we were left with the scraps of the insanity that’s taken place the last two weeks with the Wapiti wolf pack.

We were able to see the remnants of all the recent kills this massive and active pack has made near the road, but as for the wolves themselves, we were out of luck.  And it remains to be seen whether they will return south and give us the same opportunity they’ve given so many other fortunate visitors recently, or if they’ll keep going north and put on a show in the territory we just vacated.

In the meantime, we had to concentrate on the other fruits of the interior.  We finally saw a red fox, but it was a distant spot on a mountain hillside in Swan Lake Flat.  Near Norris Junction we encountered our first Trumpeter swans, which fed in the Gibbon River near the road, occasionally peeking over the snow bank at us. 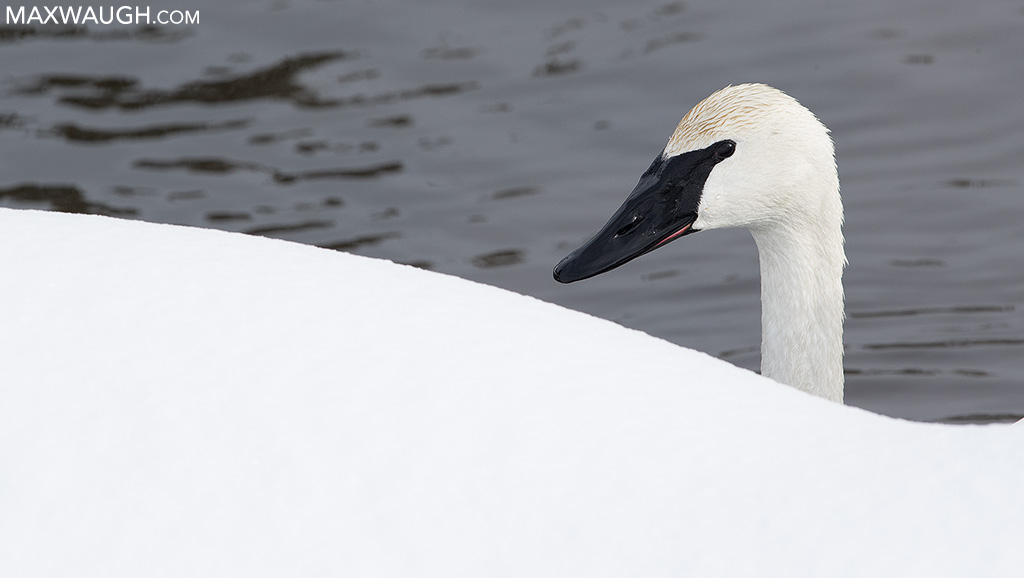 Along the Madison, a rambunctious herd of bison bounced along and crossed the river, kicking up snow and mud along the way.  The “fishing coyote” of the Madison also made an appearance, but gave us the slip just as we set up with our gear.  Further west, a good-sized bull elk grazed along the river’s edge as daylight waned.

Amidst all this, we tried to take advantage of the west side’s many landscape photo ops.  Norris provided some interesting colors, including intense greens that are only found at this time of year due to the unique thermophilic content. 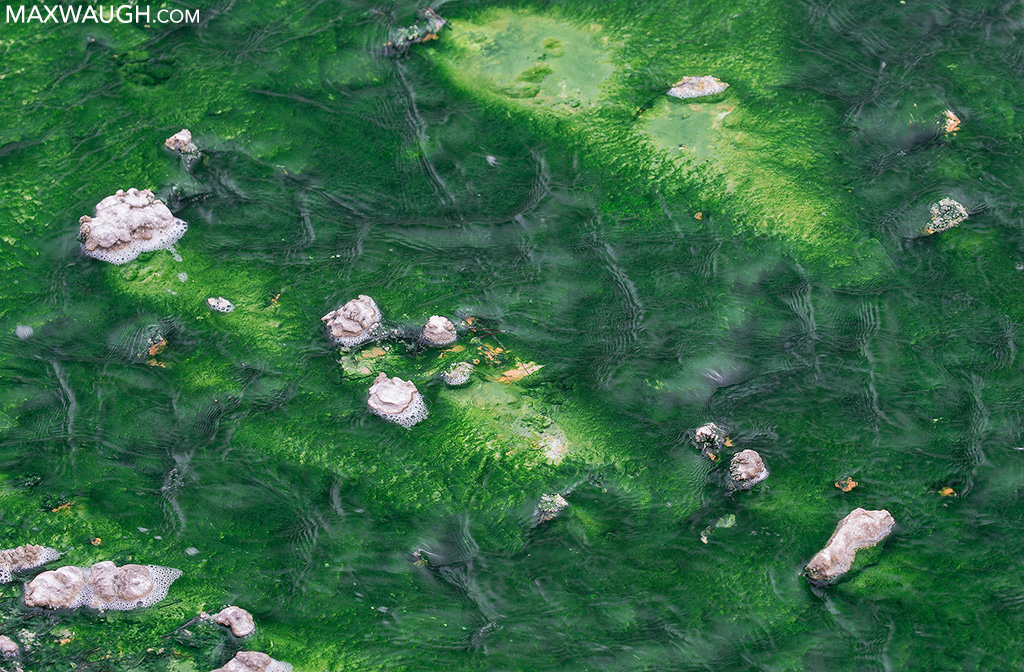 We didn’t get much sunshine, but the group still found plenty of opportunities to photograph the winter scenery.  Perhaps tomorrow we’ll get lucky and will sprinkle in a few more wildlife sightings.