Day Two in the interior was gray, windy and snowy.  Really windy.  We decided to avoid the east side of the park, since Hayden Valley and the road near the Lake have been closed recently at times due to snow drifts.  Instead, it was a good opportunity to focus on the southwest corner (barring any dramatic wolf news, which never materialized).

The nice thing about staying in West Yellowstone in winter is that one gets to explore the Madison each morning and afternoon.  When I planned the trip, I naturally hoped that we’d have some bobcat luck along the river, but even without that there are other possibilities.  This morning we had our closest coyote encounter of the tour so far past the Seven Mile Bridge.

We also enjoyed an episode of CSI: Yellowstone.  It started with a bald eagle sighting.  Then another eagle flew by.  Then, a little further downriver, we noticed several ravens flying around.  And then we spotted the blood.

It stained the snow near the river, and while the birds kept fluttering around back in the woods, we couldn’t see any drag marks indicating large prey.  So what had been caught and killed?  And who did the killing?

Eventually, a raven provided the answer.  One of my clients got a photo of it flying by, carrying something from the presumed carcass in its mouth.  We zoomed in on the photo and discovered… fish bits.  Though it seemed odd that a fish carcass would attract that much attention from scavengers, we were in the territory of the fishing coyote, and the small amount of blood and lack of drag marks fit the profile.  Of course, it would’ve been nice to see the fishing coyote in action, but it was not to be on this trip.

On our way south from Madison Junction, we saw our second fox.  This was one closer than our first the morning before (and it may have even had some black and silver highlights among the orange… cross fox?), but was heading in the wrong direction, and soon disappeared over a hillside.

We stopped at Fountain Paint Pots to take in some popping mud bubbles and splashy red mud.  On the way back to the parking lot I witnessed the wildlife highlight of the day: a raven burglarizing snowmobiles!  I’ve seen plenty of photos of these intelligent birds opening zippers and getting into bags (warnings with such photos are posted in the park for winter visitors), but had never witnessed the behavior myself.  A neat little pile of rejected items lay on the ground as the raven continued to excavate. 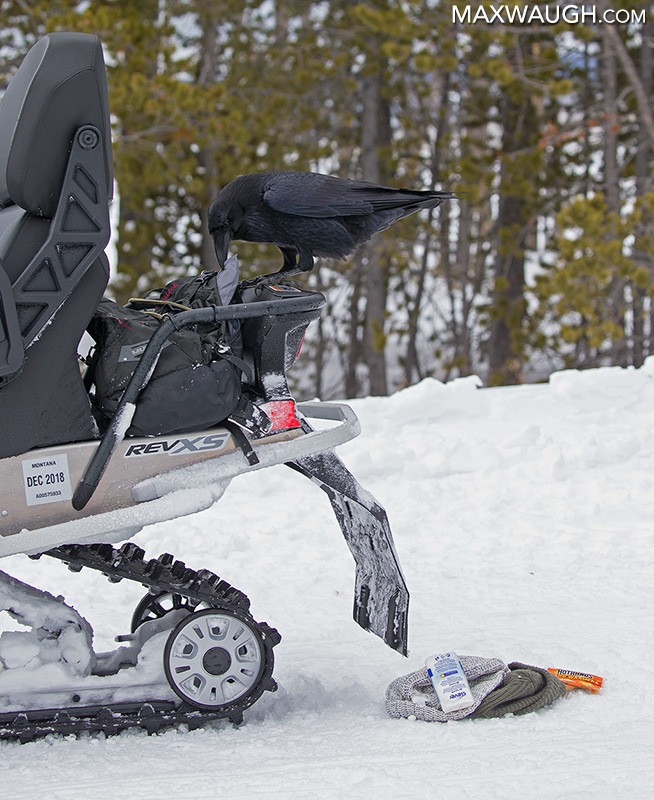 We checked the eruption times for Old Faithful, and decided to head down that way to have some lunch and wait for the show.  Halfway through lunch we walked out to the boardwalk and waited.  And waited…

Every eruption time comes with a +/- estimate… in this case 13 minutes (which is more than it used to be).  In this case the eruption finally came a full nine minutes after the plus-minus window.  Apparently Old Faithful even missed an eruption altogether last year.  The ol’ girl is losing it.

We decided to hit the road after lunch.  The wind made more boardwalk exploration less appealing, and snow was beginning to fall.  On our way back north, we did stop at my favorite stand of Bobbysocks trees for another quick landscape session… 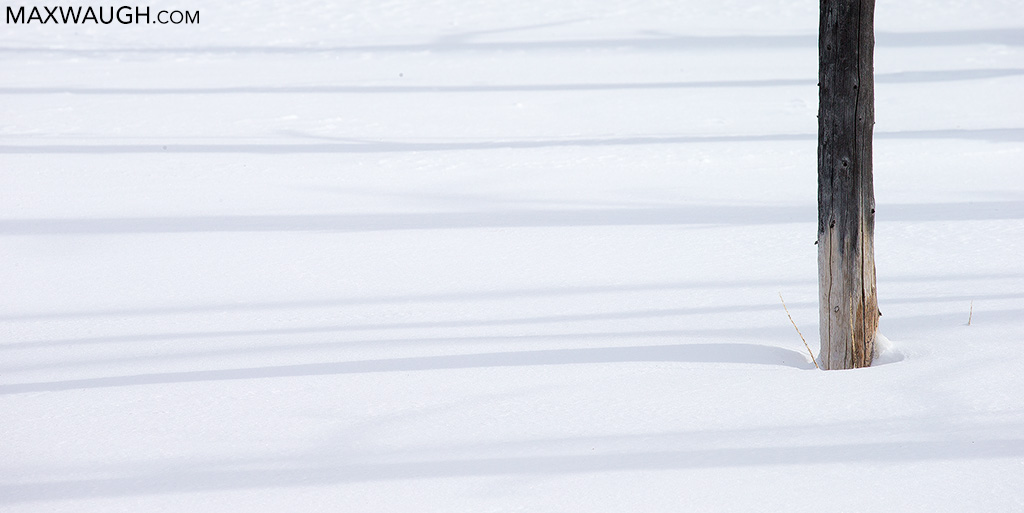 …before continuing on to the Firehole Canyon Drive, followed by a hot drink break at the Madison warming hut.  There, we found out that the Wapiti wolves were last seen in the interior still, leaving some hope for an encounter on our final day, Wednesday.

We searched the Madison high and low, but there was little wildlife activity.  I did see my first Yellowstone Ring-necked duck, and as darkness descended we found a bull elk grazing along the river bank.

Barring any wolf news, we hoped to finish off the tour with a visit to the east side of the park on Wednesday.

We enjoyed an unexpected treat on this, the final morning of my first winter tour.  While sitting at breakfast, someone mentioned that the lunar eclipse was visible just outside the door.  I hadn’t had high hopes of seeing, much less photographing the event, since we were stuck in West Yellowstone during its peak and wouldn’t even be able to enter the park until after its conclusion.  Plus, the weather forecast wasn’t great. Buying ammunition online can save you money and get you far more in terms of choice. Prices are usually lower (watch out for those shipping charges, though) and you aren’t at the mercy of the local gun store’s distributor. AmmoFire.com – bulk ammo, reloading supplies and more. We have cheap ammo for sale for a variety of firearms. Buy ammunition online today and save. Our assortment of online ammunition for sale features top brands and popular calibers for many different guns. #ammo #ammofire #best places to buy ammo online #ammunition #cheap #price #review.

But there it was, in its waning moments, as the moon set over the trees in the parking lot.  A quick setup of tripods netted only one or two usable shots, but that’s more than I expected and gives me a solar/lunar eclipse double in about six months. 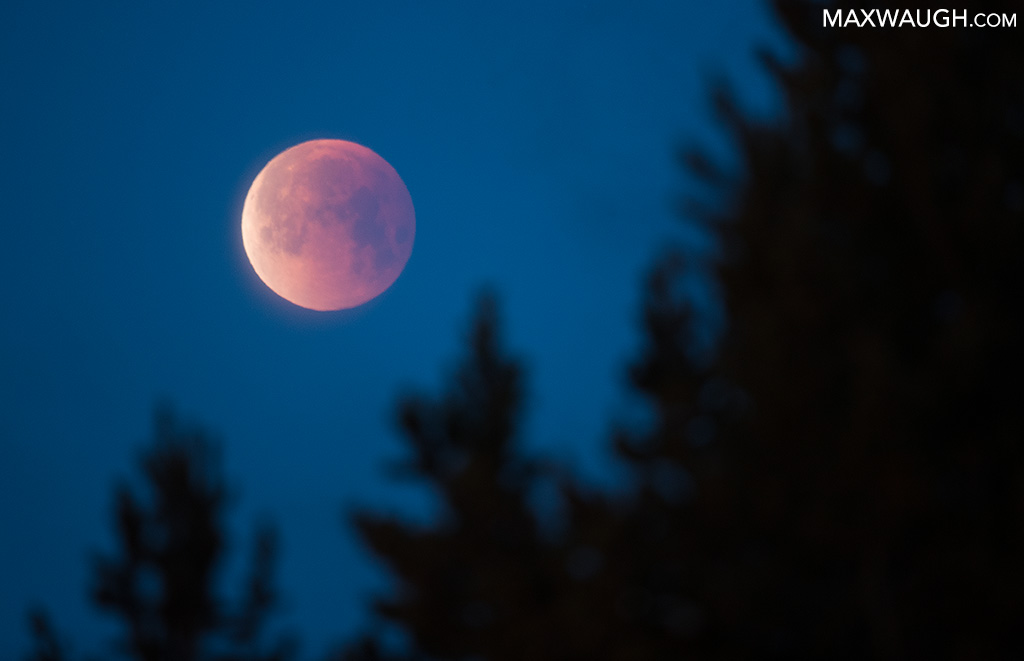 As we entered the national park things were looking up.  It was a cold, crisp morning, without the nasty wind we experienced yesterday.  Fresh tracks were imprinted in the snow all over the place along the Madison River.  The only problem was that we couldn’t find any of the animals (fox and coyote, mainly) that left them!  We did spy the usual swans and waterfowl in the river, and even a Great blue heron.  Bison were around, of course, and we had a muskrat popping up on and off at one stop.  But no canids, no cats, no otters… a morning that showed a lot of promise never quite lived up to its billing.

Following a stop at the Madison warming hut, we turned north and then made our first foray east toward Canyon.  The weather continued to hold, but more and more clouds appeared as we neared Cascade Meadows.  It was colder on the east side, and the amount of snow had visibly increased.  It really was lovely at Cascade Creek, with a blank canvas adorned only with the meandering creekbed and a fresh set of tracks. 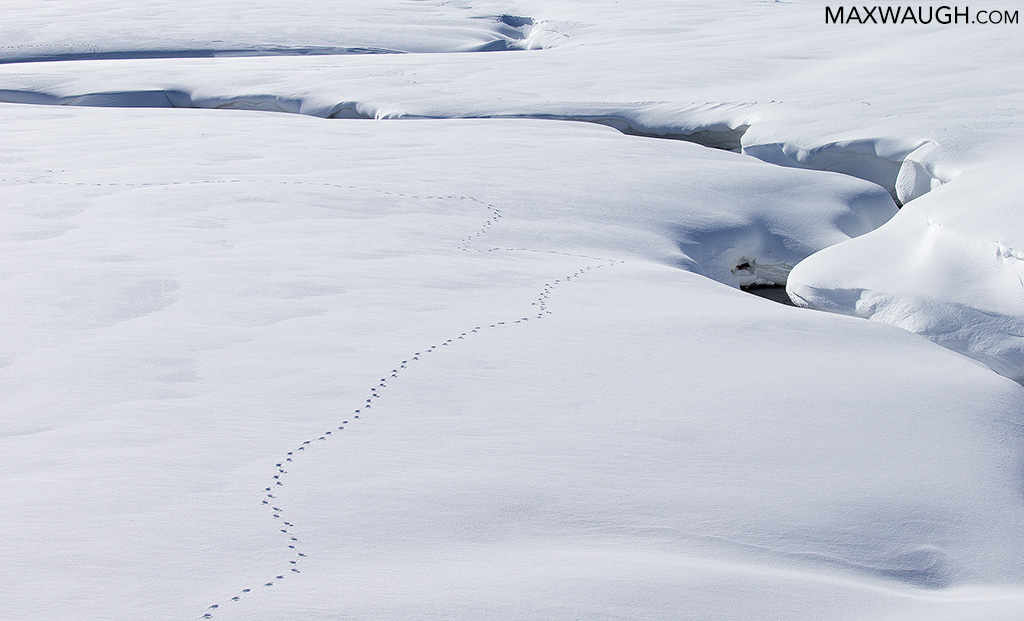 I was excited to finally get down into Hayden Valley.  We made a stop at Chittenden Bridge after spying fresh otter slide marks on the banks of the Yellowstone.  We saw more fresh markings and could even see where the otters appeared to have a den site in the snowy bank… but there were no otters.  There were tons of Trumpeter swans on the Yellowstone, probably more than I’ve ever seen there.

As we rolled south into Hayden, a lone bison bull foraged in deep snow.  The living snow plow swung his massive head back and forth to shovel aside powder and get to better grazing below. 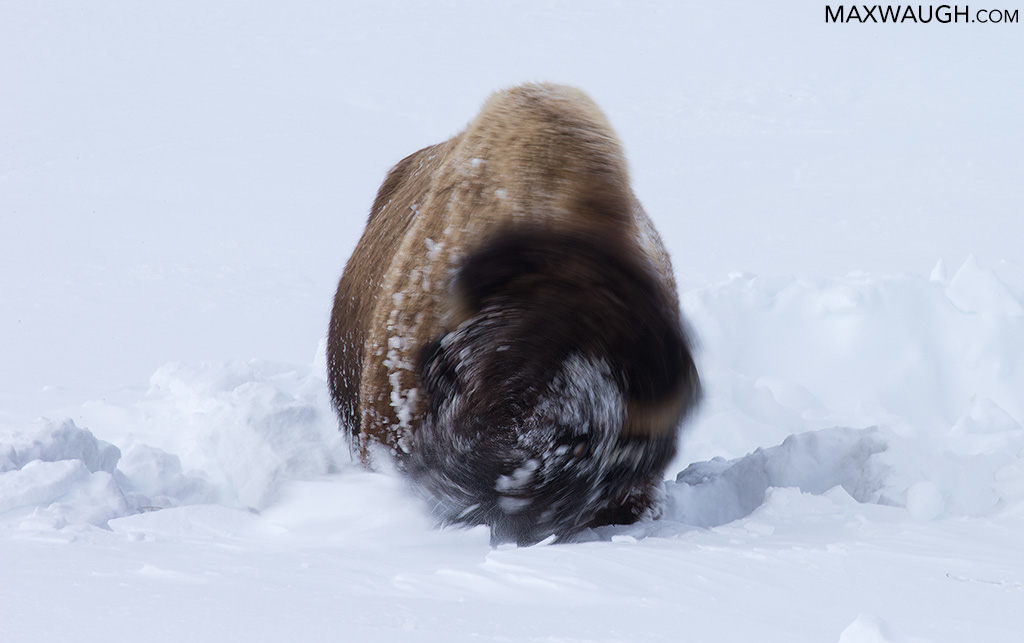 Beyond the bison, things started to get dicey.  The wind had really picked up, and the road seemed to narrow quickly.  At Grizzly Overlook, our journey abruptly ended.  Another snow coach had lost both right tires, which had popped right off the wheels as it tried to navigate the soft snow.  Our second coach on this tour also had tires (rather than the old school tracks mounted on our first coach), and we deemed it too risky to proceed.  Our skillful drivers Ron and Mark managed to get the coaches turned around, so we were able to exit the scene safely, but we warned any oncoming coach drivers about the hazard ahead.

So our journey south was shot.  All we could do was revisit the potential otter site.  All we got was more swans. 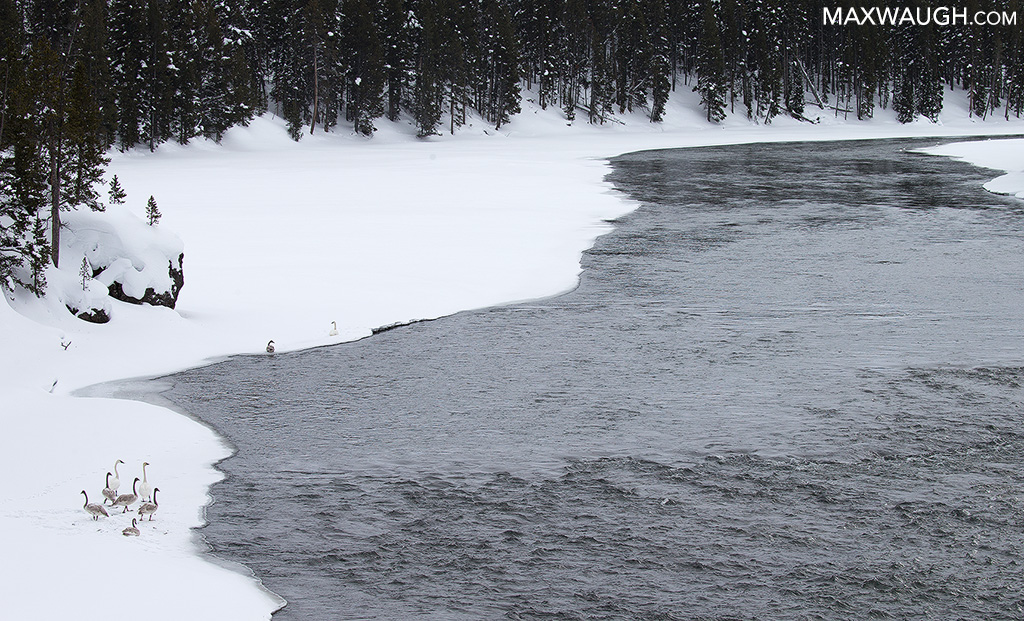 Then we stopped at Artist Point, where we enjoyed being pelted by high winds and biting snow.  And that essentially marked the end of our interior adventure.  It was time to head north, back to Mammoth.  Nothing stopped us on the way back through, though we did note the many, many wolf tracks coming down off Swan Lake Flats… the Wapitis, which had basically ditched the interior the moment we entered it.  They were seen near Mammoth earlier in the day.

The tour wrapped up with a fun dinner with the group in Gardiner.  Thursday I take them back to Bozeman for flights home.

Thanks to my clients Beverly, Bob, Christie, Doug, Doug, John, Lauri, and Martin, as well as my fellow guide Zack Clothier for a wonderful week!