I had a short break from the park, as I had to say goodbye to my first tour group on Thursday, and I picked up and met my next group on Friday.

For this tour, the order of our activities is reversed from last week.  We headed straight into the interior on Saturday.  With only two days of interior exploration this week, it was important to maximize our time.  With a smaller group of folks who had experienced some of Yellowstone’s highlights already, it meant we could skip a few of the more popular stops and devote time elsewhere.

We left Mammoth at 7am on an unseasonably warm day.  Our first stop along the western route was for a muskrat that occupied a small creek by the road.  It’s always good to start things off with a small furry mammal in winter, as opposed to the ubiquitous bison (more from them later!).

We opted to skip Norris and headed east.  With the last group only making it halfway through Hayden Valley and road conditions there in a constant state of flux, I wanted to make the first attempt on Day One, in case we couldn’t do it later.  Following a stop at the Canyon Visitor Center (which included a search for their resident pine marten), we aimed for Hayden.  First, we stopped at Chittenden Bridge.  From there we could see that the otters had been active in the area again (thanks to fresh slide marks heading upriver)… but once again we struck out with them.

The usual swans and waterfowl floated along the Yellowstone River as we entered the valley.  I was tricked into thinking we’d have some decent weather and nice visibility.  Instead, we entered the heart of a snow storm.  With a smaller group this time, we were all in a snow coach that had tracks instead of tires, and it paid dividends.  We navigated the tough stretch at Grizzly Overlook that denied us (and left another coach stranded) a few days prior, so for the first time on this trip, I was able to see the southern half of Hayden Valley.

The landscape was stark and beautiful.  Snowdrifts, hazy sporadic sunlight and a biting wind evoked desolation.  Oh, and we were probably the only snow coach to brave the area the entire day, so that contributed to the emptiness. 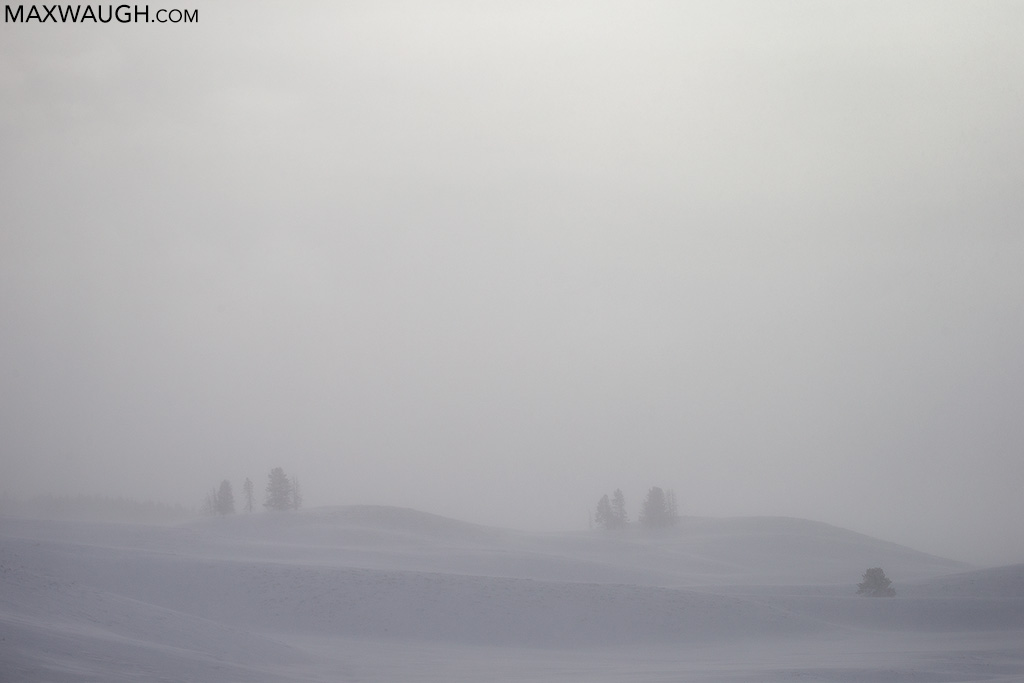 We weren’t alone, however, as a few hearty bison grazed in the deep snows on the hills overlooking the river.  Faint brown silhouettes were visible in the snow and haze as we stopped to photograph the Tom Murphy Tree.

Further south, the wind calmed down a bit… at least while there were trees flanking the road.  Once we hit Fishing Bridge and neared Yellowstone Lake, the tempest reasserted itself.  We kept on.  At Mary Bay a herd of bison stuck close to the thermal areas and a lone, windswept coyote wandered near the road, looking for shelter from the gale. 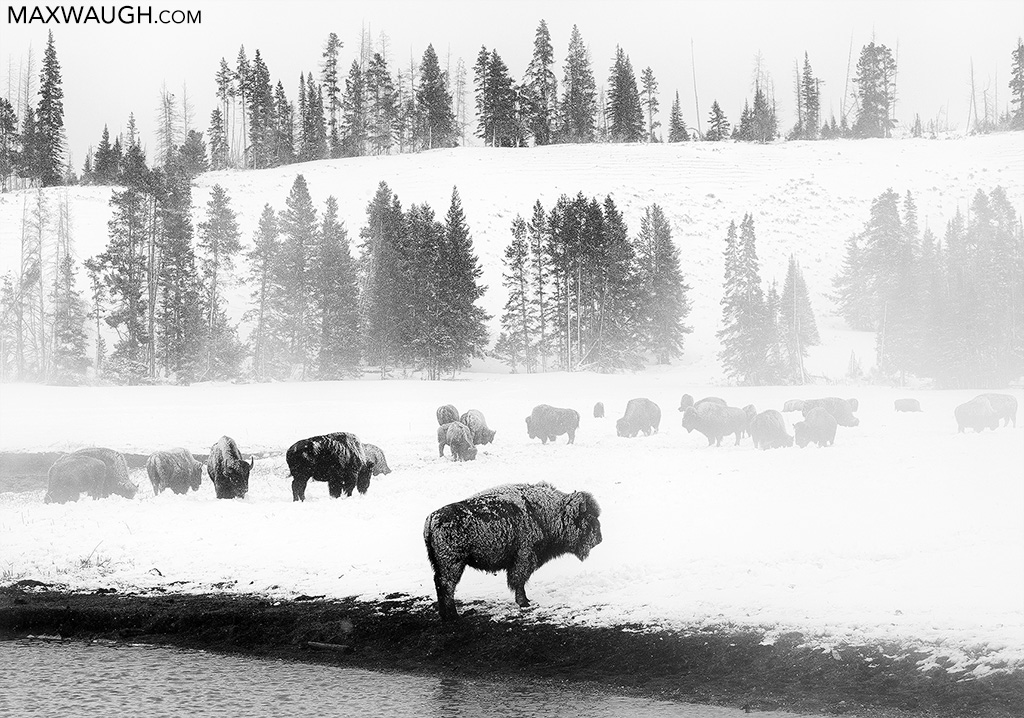 We made it as far as Sedge Bay, where we were able to pass a lone bull bison on the road.  We pulled ahead and got out to capture a classic Yellowstone winter scene. 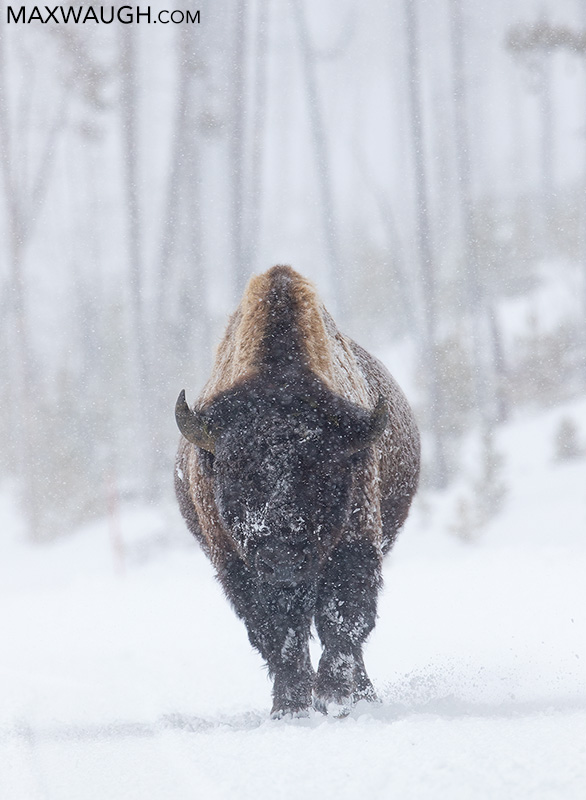 It was a good point to turn back, and on our return past Mary Bay we stopped to photograph the bison herd and the coyote again.  The chilled pooch had crossed the road and settled down near some thermal vents.  Even in the blowing wind, this appeared to be the warmest spot in the Bay.

Our return northward was fairly routine.  We did pass some coaches that had come around the south side of the loop, but in Hayden only snowmobilers joined us on the journey through the drifts.  A short stop for lunch in the middle of the valley yielded no new sightings (we keep hoping for a fox… this valley was dynamite in that regard on my last winter trip two years ago), nor did we see the otters at the bridge.  Though I did see my first Yellowstone Hooded mergansers.  Woo.

It was time to cut across to the west side, since we had to reach West Yellowstone by the end of the day.  I fell asleep during the drive from Canyon to Norris, which should be a surprise to no one (especially since I had the rare privilege of not driving), but I woke up before the junction and resumed my duties when the second-most-boring-drive-in-Yellowstone was over.

On our way south along the Gibbon River, we passed a snowmobile group that had lost a sled off the road.  Thankfully, they didn’t drive into the river.  After a quick trip through Firehole Canyon, we returned to Madison Junction, where two Bald eagles occupied everyone’s attention.  They were somewhat distant, but one was working on a nice trout.  While we waited for the eagles to fly, a Mountain chickadee landed on a nearby tree. 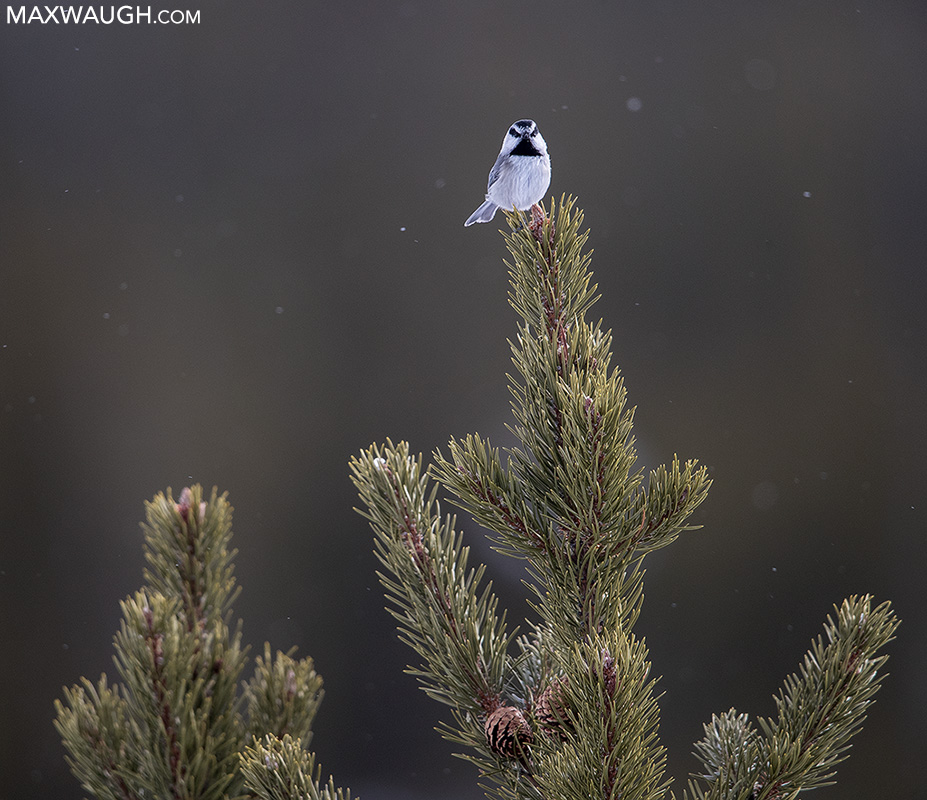 It was time to tackle the home stretch along the Madison River.  We soon encountered more roadside trouble, as this time a snow coach had caught the soft shoulder and gone off the road, plowing into a small tree.  Fortunately, most folks in the coach were okay.  Ron, our driver, offered to help, and we were able to pull the coach back onto the road.  The gas mileage on tracked vehicles like ours may be terrible, but they do seem to be more reliable when the snow hits the fan (to drive this point home, I later heard another wheeled coach had gotten stuck and blocked traffic south of Canyon).

After the successful rescue operation, we continued on our way, and soon had another coyote encounter.  This may have been the Fishing Coyote.  It was standing at attention by the river when we first spotted it, but was soon on its way.  We were able to turn around and stop for some photos as it commuted riverside before it disappeared up into the trees.

What a difference a day makes.  Despite rough weather throughout Saturday, it was much more active than Sunday.  We spent a good portion of the day looking for a (ahem) Superb Owl, but failed to find it, as well as many other targets.

The most interesting shoot may have actually been along the Madison in the morning, where a small flock of ravens worked on one of the bison carcasses left by the Wapiti Pack a couple weeks ago. 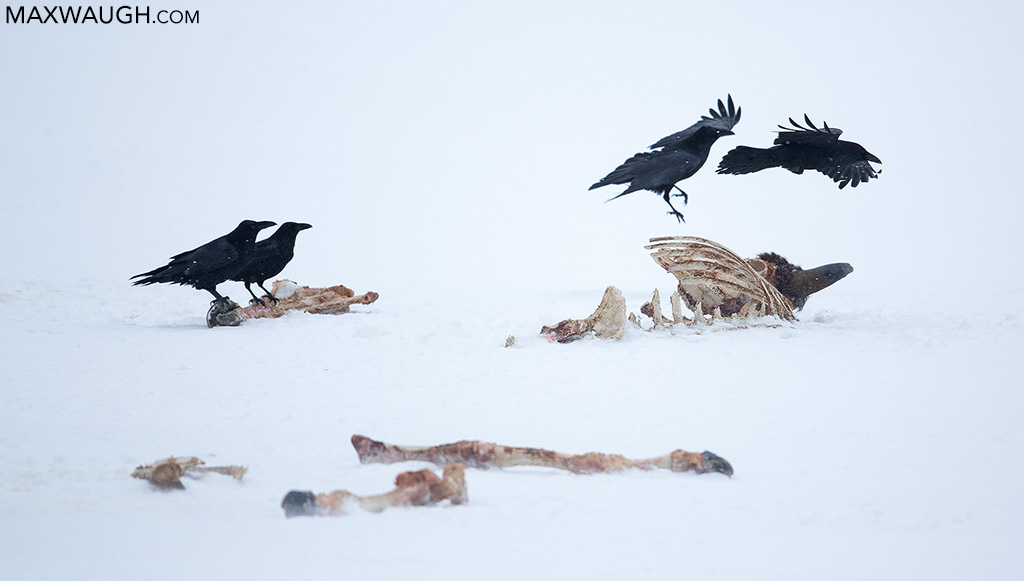 We also stopped to photograph the big bull elk (still alive) hanging out by the river, but left the Madison pretty early.  It was very quiet and we had a long way to go.  Our route took us around the south side of the loop, in part so we could check on some potential wildlife areas between Madison and Old Faithful.  It feels weird saying that, as I normally consider this a largely “dead area,” where wildlife viewing is difficult, but in winter there are occasional predator sightings along that route.

We did find one subject, a Bald eagle perched low and very close to the road. 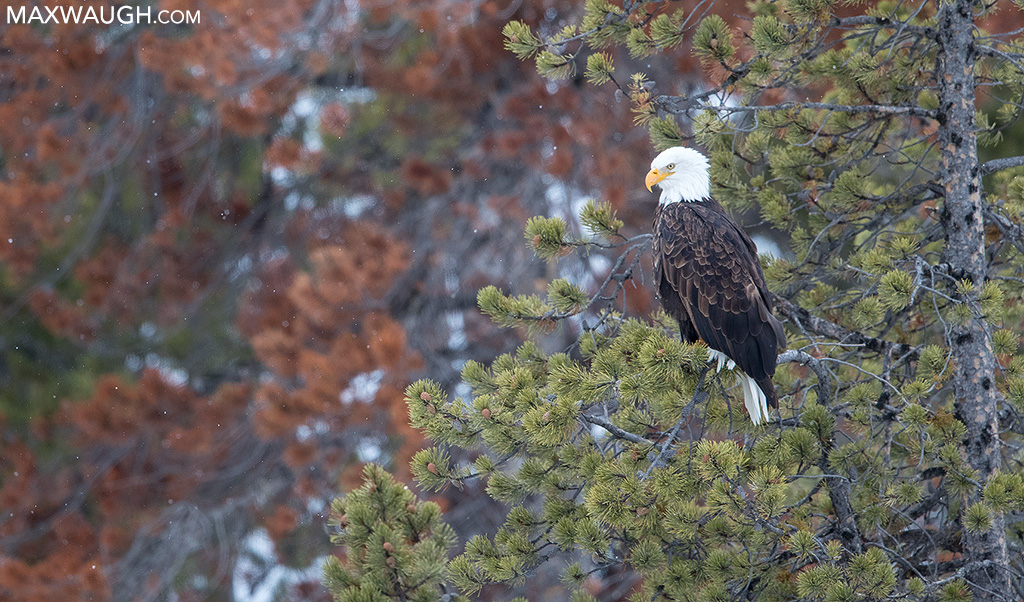 Otherwise, we struck out.  A brief stop at the Bobbysocks trees, and later Kepler Cascades, broke up the long drive to West Thumb (which remains as boring and devoid of animal life as ever… we didn’t see a single animal from Old Faithful on).  My group piled out at West Thumb to walk the boardwalk loop, which can occasionally provide some interesting photo ops.

From there, we drove north along the lake, keeping an eye out for owls, foxes or perhaps otters.  Nada.  We were about to pull into the Fishing Bridge warming hut for lunch when I spied something in the road in the distance.  Through binoculars, we could tell it was a larger canid, but was it difficult to identify.  A lone wolf is always possible (certainly down near the lake), so we headed down to get a closer look.  It was a coyote.  Perhaps the same one we photographed at Mary Bay on Saturday. 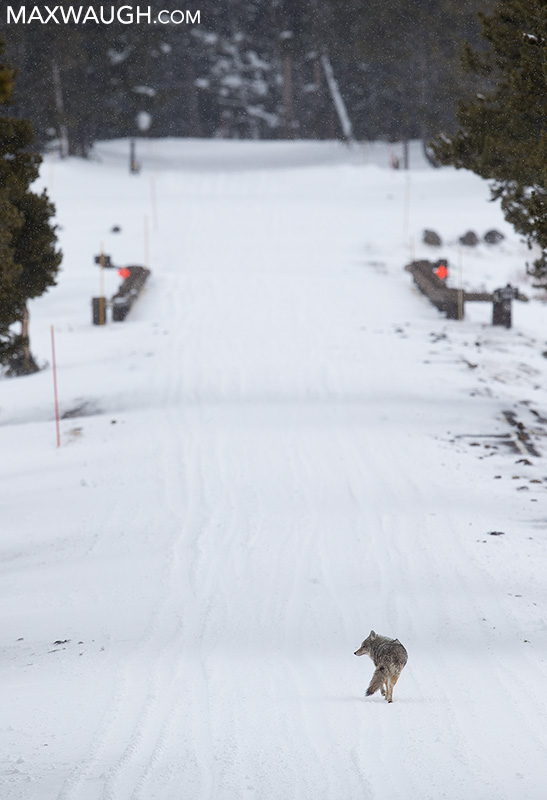 Back to Fishing Bridge for a short meal, and then we proceeded to Hayden Valley.  It’s amazing how such a huge, wide open landscape can hide its denizens so well.  Aside from bison, there was no sign of life.  The valley continues to be strafed by high winds, which I imagine can’t make hunting easy for predators that rely so much on their hearing.

We encountered further disappointment at Chittenden Bridge.  The otters had been active since we stopped there 24 hours earlier… but were nowhere to be seen this time.  A pity, but not our last chance to see otters on this tour.

The drive back to Mammoth was quick.  We did see another eagle at Norris Junction, but that was more or less it.  On Swan Lake Flat, the sun shone through and lit up a beautiful landscape, but the only thing we could find in it was a park service vehicle that had gotten stuck on the shoulder and abandoned.  Snowshoe tracks led to and from the vehicle, heading to and from the eastern flat, rather than the road.  Odd.

That was more or less it.  Certainly one of those quiet days, but the good news is that we have three more days of exploration in the (theoretically) more active northern range before the conclusion of the tour.  It should be fun!