If there’s one word to describe Yellowstone right now—aside from “crowded”—it may be damp.  Plenty of rain has been coming through recently.  The rivers are high.  Areas like the Confluence and Pelican Creek look more like lakes, and there are even little waterfalls draining from the floor of the Lamar Valley into the river.

It was certainly damp Monday morning as the park tried to dry out from last night’s rain.  Low-hanging clouds lined the hills and valleys of the northern range as I drove through. 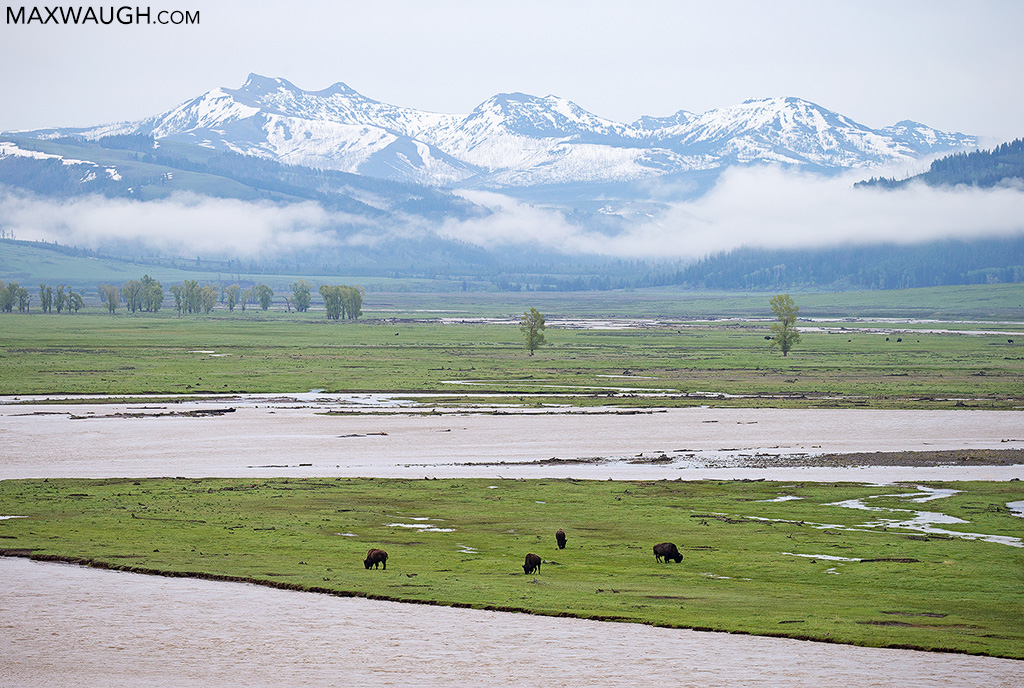 I did my usual first run along the northern road, checking on the badger den in the Lamar (folks waiting), the black bear families on the Tower Road (absent), and a few of my other spots (all quiet).

I backtracked, figuring I should spend some time with the badgers at some point… one never knows when momma might want to move the den site.  But I also had a desire to follow up on the recent reports of otters at Trout Lake.  Generally it’s a bad idea to throw one’s self into the slog up to Trout Lake on the very first day, but I do love those otters… and there wasn’t a whole lot else happening in the north.

The badger sett was still quiet, so I committed to the hike.  I huffed and puffed up the hill, arriving at a lake dotted with a few folks casting lines, some scaups and goldeneyes, and a fair amount of mud.  But no otters, and no sign of recent activity.  When the otters have been active I often find scat on shore.  Not this time.

I went over to Buck Lake, but it yielded the same result.  There were a few small birds flitting about.  Yellow-rumped warblers, Chipping sparrows, robins and juncos.  Not in the mood for a stakeout, I chose to descend to my car and get back to the more terrestrial, stripey mustelids to the west.

The badgers were out when I arrived, and it took me some time to squeeze into a parking spot in the crowded lot.  I made it up to the viewpoint across from the sett in time to snap a few shots.  We did eventually see all four kits emerge, but it was a real challenge getting clear views of the whole family, since mom either tried to nap or they were all situated on the back side of the mound. 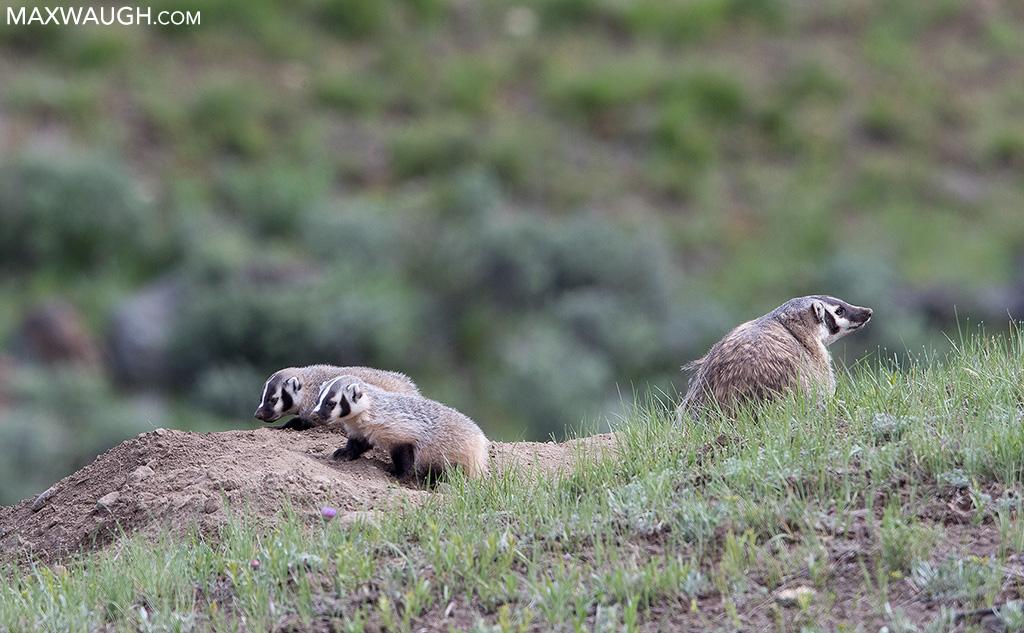 The sun started to shine and things were warming up as momma badger headed out to hunt.  I decided to call it, expecting to return later in the afternoon when (perhaps) conditions would be better.

There was still no sign of the other mommas—the black bears on the Tower Road—as I drove through.  So I decided I may as well complete my first scouting day by heading over to Hayden Valley and the Lake.  The grizzlies had been out this same morning, so maybe I’d luck into an afternoon sighting.

But first, a nap!  Of course.  I got maybe ten minutes before a family decided to take selfies right outside my window as I rested on Dunraven Pass.  Those ten minutes were enough to get me going again… though I figured a F’Real milkshake might be needed later to carry me through the drive home.

On over Dunraven.  As I passed the Canyon gas station, I peered over… lights in the windows, which meant the F’Real was in play.  Further south, there was little of note in Hayden Valley beyond bison, geese and a lone Trumpeter swan.  I peeked at LeHardy Rapids but saw no sign of Harlequin ducks (doesn’t mean they won’t be there later… I’ve seen them into mid-June), then turned at Fishing Bridge.  The east road along this stretch isn’t a pretty sight, with trees chopped down everywhere in preparation for the road work that’s about to commence.

I was not surprised that Raspberry and Snow, the famed grizzly family, were long gone by the time I arrived at Sedge Bay.  But I did manage to run into our good friends Bill and Peggy, whom I haven’t seen in a couple years due to everyone’s travels taking them in opposite directions.  It was nice catching up (aside from hearing about the close grizzly encounters they’d enjoyed a few hours earlier), but eventually I had to keep exploring and then make my way back north.  Especially with another storm front closing in.

The spots I checked further south were quiet, so I turned back.  Before heading over the pass, I needed to gas up the car and refuel with a F’Real milkshake.  Once the car was attended to, I stepped inside and… Out of Order?!

I had to settle for ice cream.  My sadness was compounded by crummy weather, which threatened to chase me home all the way over Dunraven.  Luckily, it cleared up a little.  A lone black bear grazed at Rainy Lake.  It appeared to be a smaller bear, perhaps once of Rosie’s now-independent cubs from her previous brood.  It did not look like one of the moms, so I worked my way through the jam (which the rangers were in the process of disbanding) and kept going.

In Little America, I passed a male bluebird perched near the road.  I had to drive a ways down, but I decided to find a pullout and turned around, because bluebirds will sometimes linger while they’re hunting at roadside.  This one did, and I was even able to park and get out on foot to snap a few shots. 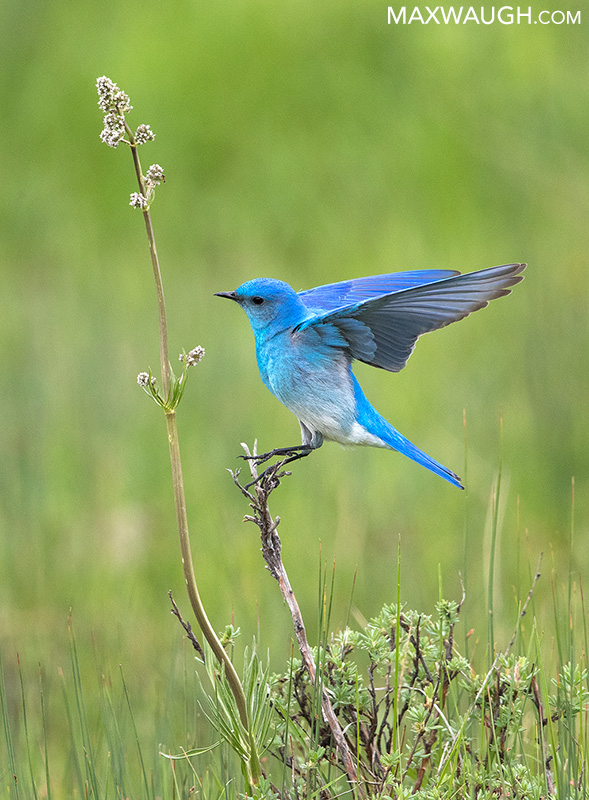 I returned to the badgers, and joined the few lingering photographers on the hill.  The mother badger eventually popped out and disappeared, off once again to hunt.  We couldn’t see where she went, but after a while I spotted her coming back… walking right down the road. 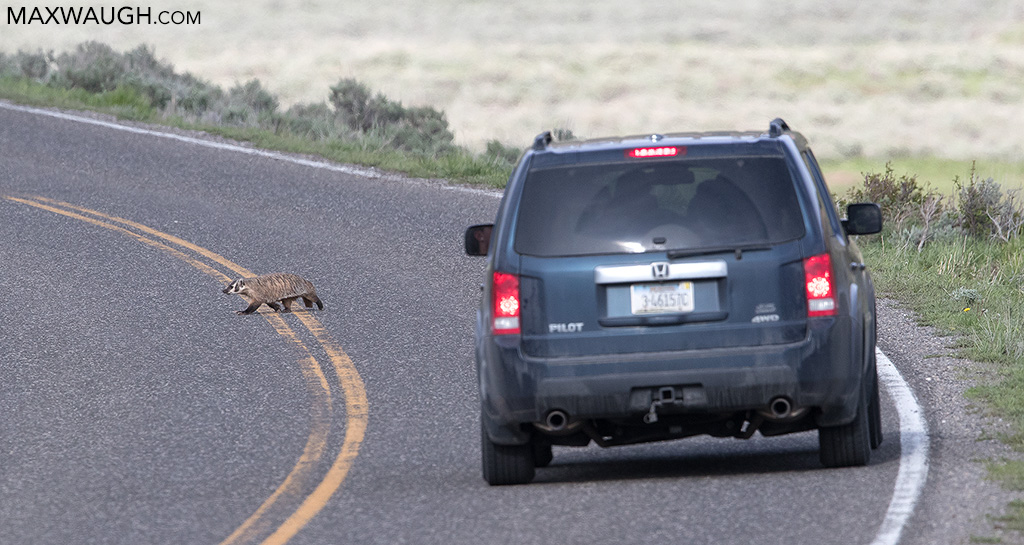 Soon she returned to the den and the kits came back out.  Once again, we saw all four, and they were very playful.  Unfortunately for us, most of the action occurred on the back slope of the mound, so we never got a great view of the entire family at any one time.  Hopefully there will be more opportunities.

It was an okay first day.  Unfortunately, work and cabin obligations will keep me in for a while on Tuesday, but we’ll see if there’s an opportunity to get back into the park in the afternoon.

Sleeping in until 6:30 sure felt nice.  I would’ve preferred 8, but that doesn’t even happen at home, so I was happy to take the extra hour-and-a-half of shuteye.  And for once I didn’t have to pull over for a mid-morning nap…. because I didn’t get to go into the park this morning.

As is the case on these trips, I sometimes have to stay back in Silver Gate to tackle work and/or cabin business.  Luckily, most of the work and meetings were finished quicker than expected, giving me time for some afternoon exploration.  My mother, who is staying here this week, joined me for today’s drive.

We entered around 3pm.  It was nice and sunny, but there was certainly some mixed weather in the distance.  I half expected to be rained out for the afternoon given all the thunder we were hearing on and off, but it never happened. It was wet when we passed the badger sett, but it was still odd not seeing anyone there.  Later, after seeing nobody around there on the way back through, I had to wonder if people fled the weather or if momma badger finally moved to a new den (Edit: tonight I learned that she did indeed move to a new den site!).

Approaching the Yellowstone Picnic Area, traffic slowed considerably, and I popped out to see which and how many bears were getting everyone’s attention.  Someone mentioned a cinnamon, but when we piled back in the car and drove past where a bear was finally visible, it was a black.

Up the Tower Road, we did not stop for the bear jam at the bottom of the road since parking was scant and rangers were already moving people back.  We did drive past just as Rosie and her three cubbies descended from a tree not far away and climbed the hill.  Up toward Calcite Springs, another black bear grazed in the deadfall beneath the road.  Still no good opportunities to stop for black bear photos.

I showed my mom where the Peregrine falcon was nesting in the canyon before we returned down the hill.  I drove on to the Petrified Tree drive, where I stopped to say hi to a fellow photographer and catch up on what I had missed today.  That’s when I spotted a fox trotting along the road below.  We got down there in time to catch it crossing the road with an egg in its mouth. 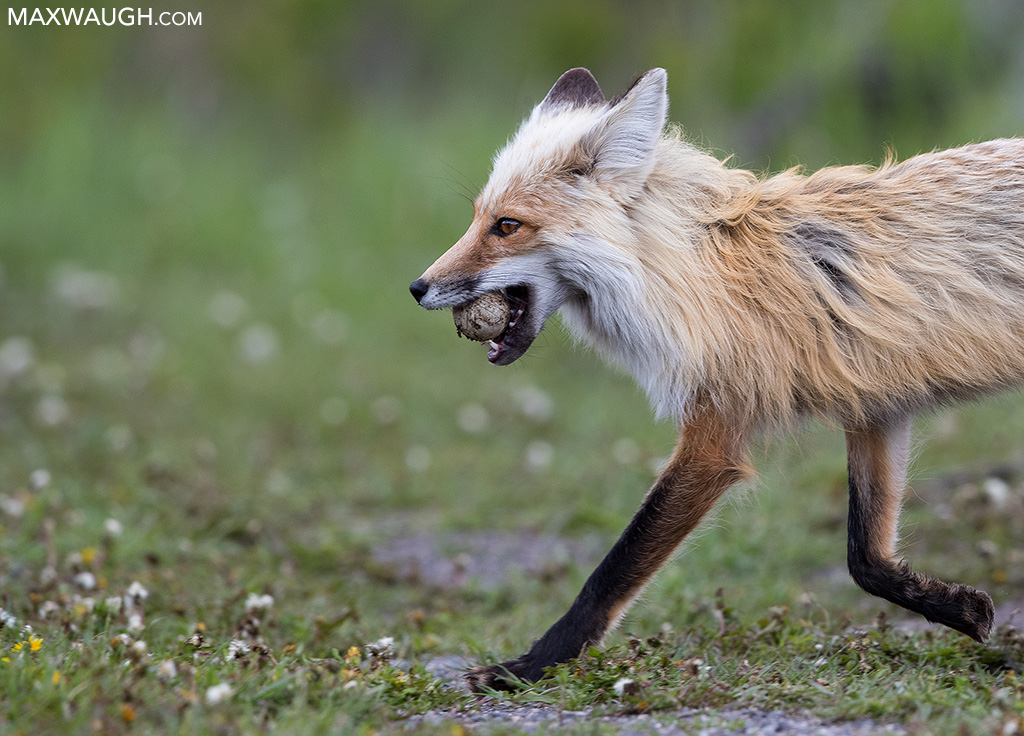 The fox cached the egg before continuing its hunt.  My mom and I left it and drove to Hellroaring.  I had stopped here on Monday, but only for a quick listen and scan of the nearest rock pile.  This time we got out for a short walk down and through the woods, looking for anything from pikas to mustelids to birds.

A few sparrows zoomed past, and then one of my favorite Yellowstone birds appeared: the male Williamson’s sapsucker.  He didn’t stick around for photos, as he was busy chasing a Northern flicker.  It’s hard to say whether he mistook it for a female sapsucker (the coloration is not too different) or was simply being territorial and chasing it off.  Later we heard his mournful, lonely call a few times, so I suspect he was hoping to find a lady friend.

A small herd of elk eyed us warily through the trees before turning away from us.  On the way back to the lot we finally saw a pika in the rockpile, as thunder echoed overhead.

Still, no rain.  We began the slow journey back to the east, pausing for a fox (the same one possibly) in the road at Elk Creek.  It squatted and claimed my lane of the road for itself before hugging the ground and slinking into the grass to pursue ground squirrels.

One more pass up the Tower Road gave us a distant view of the Calcite black bear, now comfortably ensconced high up a tree.  I suspect it was one of the younger bears from either of the Tower area sows, probably the loner I saw on Monday.

Down by the Yellowstone River bridge, we just missed bears crossing.  It was our first bear of the day… along with its cinnamon yearling that we never spotted on the first pass through a couple hours earlier. 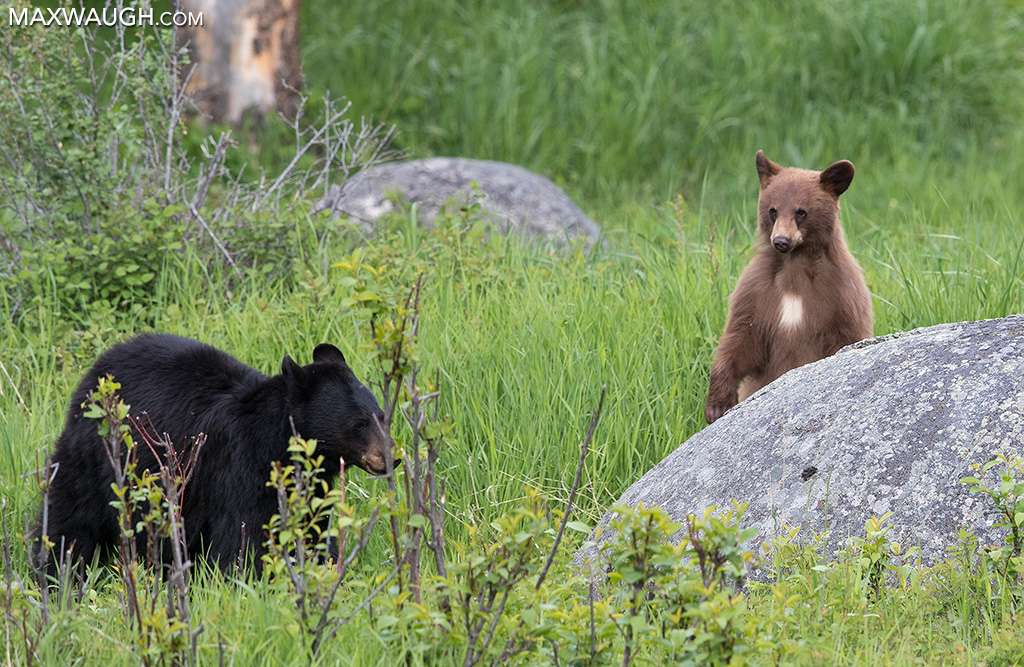 They had just walked the bridge and went down below.  So I finally snapped a couple black bear photos, and then watched as they trudged uphill, coming face to face with a skittish white-tailed deer.  The deer bounded away, and the black sow briefly pursued, probably more interested in seeing if there were any fawns hidden about.

Our final notable sighting of the day occurred when I spotted a coyote out in the flats… accompanied by a pup!  That was pretty odd, seeing a pup out away from a den like that, and soon it was out of sight.  The park always throws something new at you.