How would you feel if the alarm went off at 3:45am?  Yeah, that’s about right.

I was on the road by 4:15, meeting a friend who was coming out of Cooke City, with a goal of reaching Yellowstone Lake to find some grizzly bears.  I hadn’t done the lake journey in the morning yet, missing the roadside show being put on by a couple of popular bears down there, so I figured I’d better get at least one early trip south under my belt while they were still around.

Naturally, it was dark much of the way.  You spend most of your time behind the wheel on these Wee Hour drives attempting to wake up, watching for creepy glowing bison eyes in your headlights (often the only clue a living roadblock may be present), and trying to avoid crunching all the little mice hanging out in the middle of the road.

There were some wildlife sightings along the way.  A fox crossed in the darkness near the Yellowstone Picnic Area.  Up on Dunraven Pass, I spied a dark, bulky shape moving through the sage above the road with urgency.  It was a grizzly bear, my first on Dunraven in some time.  Unfortunately, I was still pulling over when it stood up on its hind legs to peer down at me.  The full moon shone brightly just to its right.  What a scene!  Unfortunately, there was only time for mental pictures.  *Click!*

Around the next bend, a herd of cow elk were scattered on the hills.  Sadly, there were no more pullouts, otherwise there may have been an opportunity for some elk/moon shots at least.  *Click!*

Tired of taking all these mental pictures, I finally stopped for a real photo with the moon and snowy mountains on the south side of Dunraven.

Dropping down into Hayden and the lake, we arrived on the scene near Steamboat Point around 6:15.  Per their normal schedule, the grizzlies known as Raspberry and Snow were near the road.  They were close, but mainly doing what bears do… keeping their heads down, eating, etc.  It was a challenging session due to the subdued behavior but also the presence of a lot of deadfall. 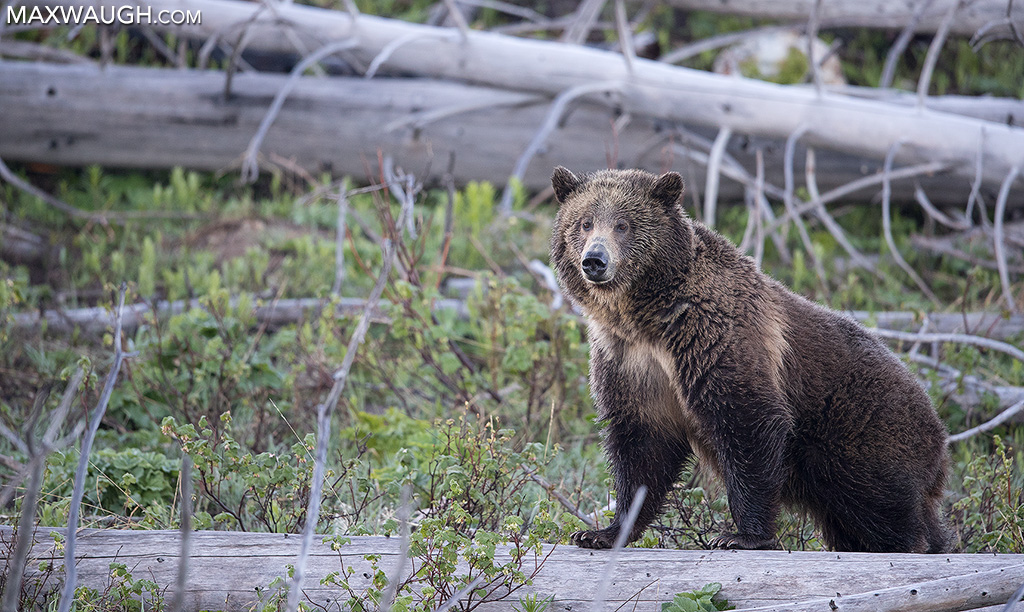 When mother and “cub” (it’s hard to call a three-and-a-half year old grizz a cub) finally came together for a fun nuzzling session, it occurred right behind some branches.  Of course.

The pair disappeared over the hill pretty quickly.  That’s when the wait began.  I stuck around for a while, but eventually decided to roam a bit.  We checked the Lake Butte Overlook (nada), and then headed back to Fishing Bridge and south to investigate Bridge Bay and Gull Point.  There was a distant kingfisher above the large pond on Gull Point Drive, but little else beyond some waterfowl.

We figured we gave the bears enough time, so we returned to wait with the rest of the crowd.  Apparently the pair made a brief reappearance, but then went back over the hill.  So we settled in.

Yellowstone Quiz: What can you do when you’re waiting endlessly for grizzly bears?

A) Nap.
B) Snack.
C) Photograph the local raven that’s hoping for handouts, because you honestly don’t have enough raven pictures to last a lifetime already.
D) Endlessly psychoanalyze a grizzly bear with separation anxiety in hopes of better positioning yourself for her emergence from over the hill.
E) Take your tortoise for a walk.

If you answered F) All of the above, you are correct!

It was a long wait, and many of us changed positions once or twice as the bears were seen briefly before quickly disappearing again.  It was late in the morning and things were heating up, so I wasn’t sure I wanted to stick around much longer (figuring any resulting photos may not be great if the bears did show up again).

I was just pulling out to drive back west when everyone else pointed the opposite direction and took off.  The call had come in that mother and offspring had come back out.  Sure enough, they were around the bend a short ways above the road, but disappeared over a berm just as everyone pulled in.  From then on, we had fleeting glimpses, until the bears showed up on an upper hillside.  With the late morning heat waves and a lot of deadfall and branches in the way, this really wasn’t a good photo op.  I hung back from the crowd, until I noticed the Tree swallows…

It was a lot of fun trying (largely unsuccessfully) to photograph these lightning fast swallows landing and taking off. 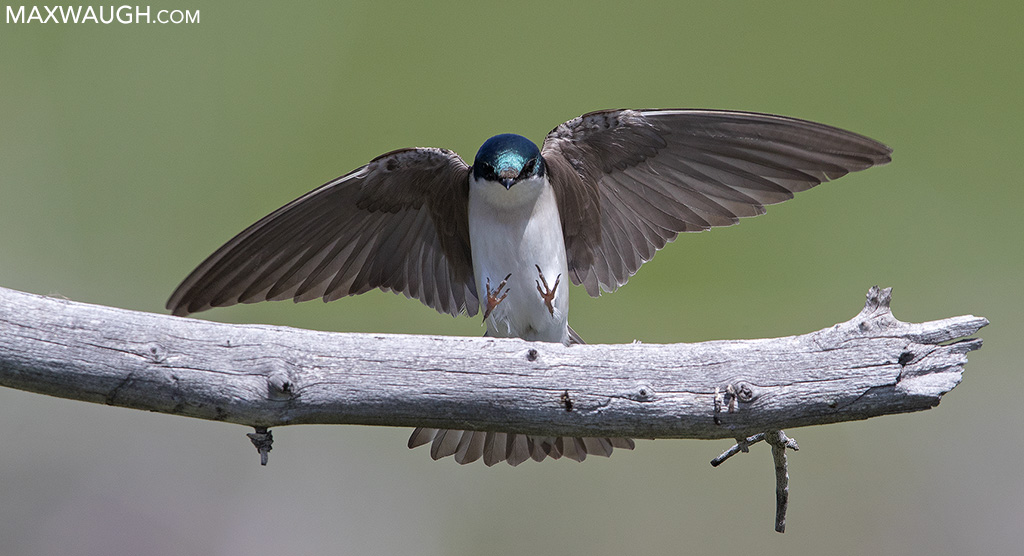 The bears weren’t getting any closer any time soon, so this time we did pack up and headed off for a quick lunch at Fishing Bridge.  Afterward, we drove back to the north, hoping to still fit in a pre-planned hike in the afternoon.  But we kept getting held up.

We passed a small bear jam south of Yellowstone Falls (a cinnamon bear below the road), but didn’t stop.  However, we did pull over at the double pullout near Canyon.  Despite the wet conditions, I wanted to hike in a short ways to check on Great gray owls.  Lots of large puddles and lingering snow back there, but no owls (as expected).  After a quick stop at Canyon, we turned north from the junction… and almost immediately encountered a traffic slowdown.  I spied a grizzly bear just disappearing into the woods.

Reversing course, it was a matter of guessing where the bear might emerge near Cascade Meadows.  I drove just a tick too far, but was able to see the bear crossing behind us.  So we went back to the junction and drove back south to a point where we may be able to view the grizz from a distance as it marched toward the trees (the same woods where we had briefly searched for owls a short time earlier).  It was a smaller, but handsome grizzly. 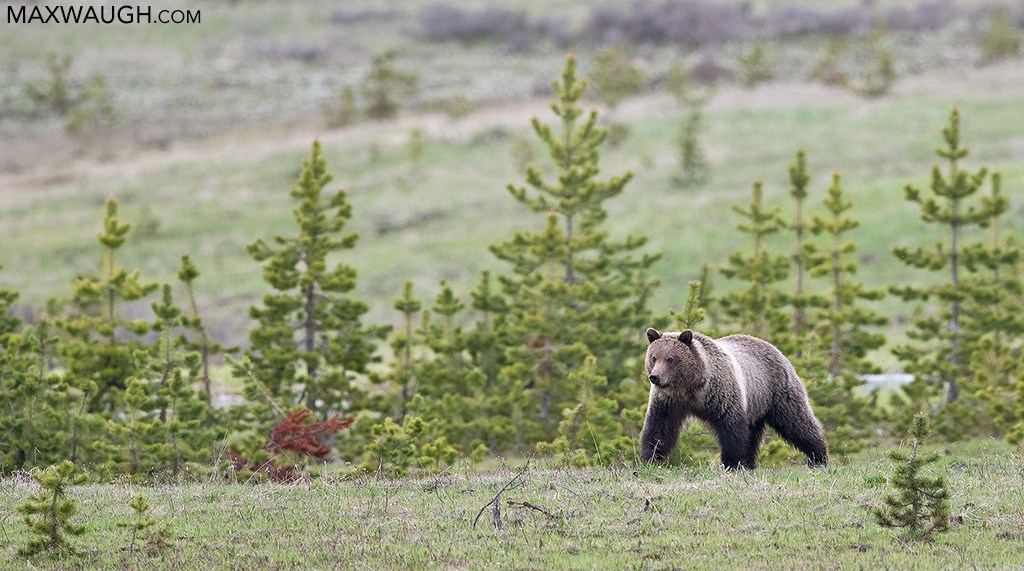 Up over Dunraven we traveled, into the dark and cloudy northern range.  We finally reached the Hellroaring trailhead, vowing to hike even if it was going to rain on us.  Leaving a car at Roosevelt, we figured we could hike down toward the suspension bridge and then fork eastward to take the trail back to Tower Junction.  I was even told that the one way trek would all be downhill or flat nearly the whole way.  Bonus!

The hike started fine, and the light rain actually dissipated.  This was my first time taking the Hellroaring trail… I’m usually wandering the woods at the top of the hill and away from the trail!  We reached the bridge, then backtracked to the fork that would take us to Tower.  Down the hill and… “oh, there’s a river (or a really big creek, at least).  And we’re apparently supposed to ford it.”

Given the saturated conditions lately, the water was really gushing.  There was no way we’d try to cross.  So much for not going uphill on this hike… We had to chug a mile back up to the parking lot.

Pretty soon it started to rain.  Hard.  So maybe it’s good the hike was cut short.  I ended up driving all the way home, as it was getting darker and wetter by the minute.  I did spy moist moose butts facing the road at Round Prairie and just inside the northeast entrance, and that rounded out a very good wildlife day.

I was back on the road at a more normal time today.  At Pebble Creek I saw a single moose on the hill near the aspens.  The carcass in the eastern Lamar was entertaining a host of eagles and ravens.  Not much else happening in the valley as I continued toward Little America and then Tower.  I had agreed to meet friends for a walkabout this morning, and we may as well have said “meet at the bear,” since we spotted each other just as we drove up on opposite sides of a black bear grazing along the Tower Road.

It may have been one of the sows, but the cubs were nowhere in sight.  After a quick check near Petrified Tree, I headed to our rendezvous.  During our excursion we saw a few critters.  A Sandhill crane picked its way along a far hillside until a trio of coyotes scared it off.  At one point two cow elk sprinted from the west directly toward and past us. 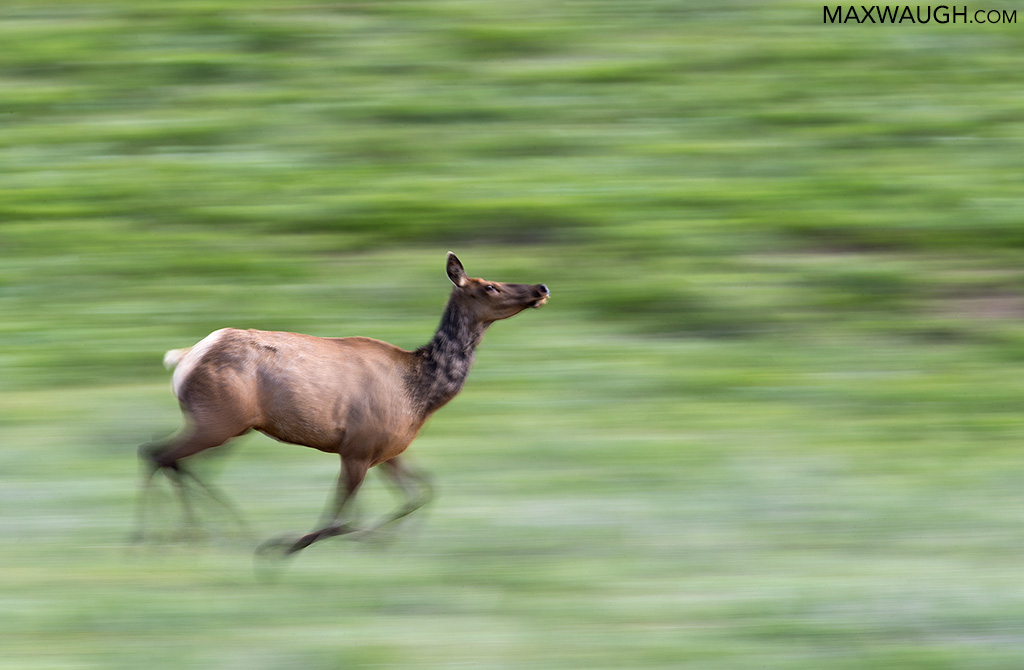 They looked pretty worked up, and I soon saw a pronghorn sprinting away from a distant hillside in that direction too.  I speculated if there was a predator about, and later heard that a lone wolf had approached and crossed the road in that area.  We also witnessed some cool coyote/raven interaction, as the bird kept dropping in to steal tiny bits of some sort of small carcass before being chased away. 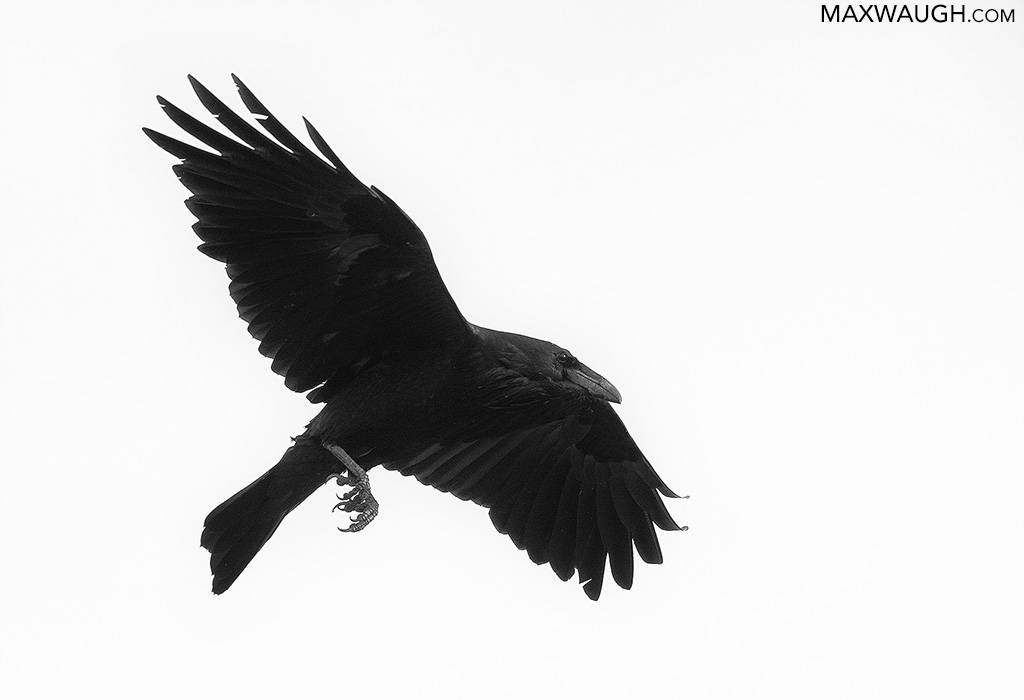 We returned to our cars a couple hours later, and I still had a little more time to explore before heading back to Silver Gate.  There were now two black bears on the Tower Road, not more than 100 yards from each other, causing separate bear jams.  They were both a bit too far up the hill to entice me to stop, as was the case with the black bear hanging out near the Tower Ranger Station (she was there yesterday, and based on reports this may have been Rosie).

I had to return home for lunch and to take care of some business, so I drove east.  As I was about to enter Lamar Canyon, I spied a couple standing at roadside, pointing their cameras into the sage.  There was a red fox lying down not more than 10-15 yards away.

I wasn’t going to approach it that close, so I grabbed my lens and walked up the hill a ways.  By this time more folks had stopped below and the fox was on the move.  I waited and got some glimpses as it walked through the sage a safe distance away. 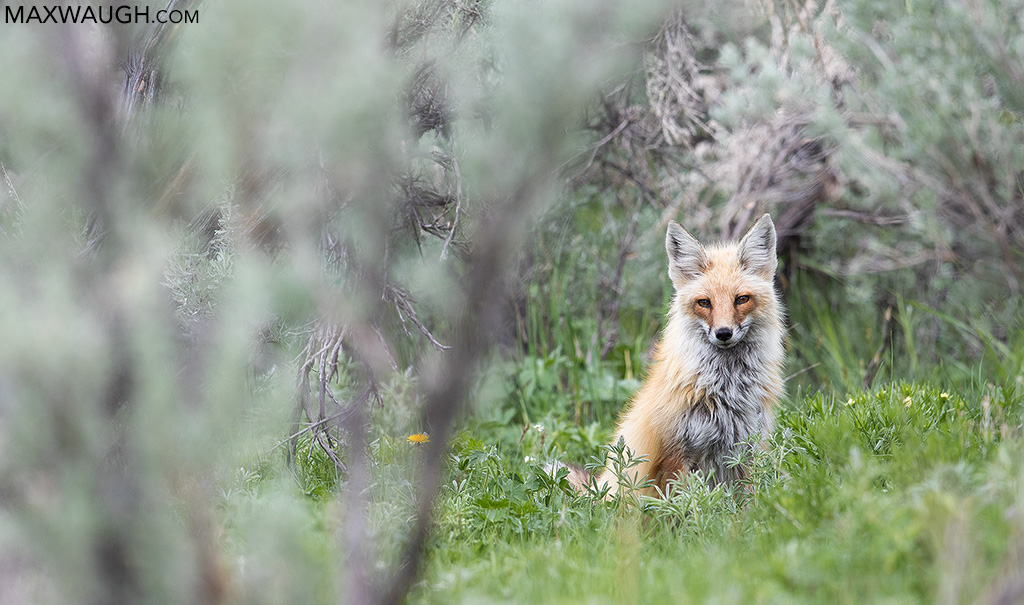 It appeared to be seeking out a more private place to nap, so I let it be and returned to my car.  After one more dash into the woods to check for owls, I exited the northeast gate.

Following lunch I finally had a chance to score a mammoth Moose Tracks shake from Cheryl at the Stop the Car Trading Post.  I dropped off some new merchandise (including new photo prints… 2019 calendars are arriving next week!), and then finished up some other business before returning to the park with my mother.  We only had a few hours before I had to return home for a YNP conference call, and unfortunately it was a pretty uneventful outing.  Though, as usual, there was plenty of afternoon rain!

I’ve only got one more day before I have to wrap things up and prepare for my photo tour, which will start over the weekend and will run through next Friday.