My final “free” day before the start of my photo tour activities wasn’t quite as easy going and relaxed as I’d like.  I did make it out in the morning, knowing that I’d have to return home to tackle some obligations at midday.  Wolf watchers were gazing intently toward the lower hill in the Soda Butte Valley.  There was no room to pull over, so I continued (later hearing the wolves walked down the road shortly afterward, though likely farther from the small crowd).  Part-way through the Lamar, another group was watching a grizzly high in the hills.  I went on.

Two coyotes trotted across the floor of the Lamar Valley as I drove past. 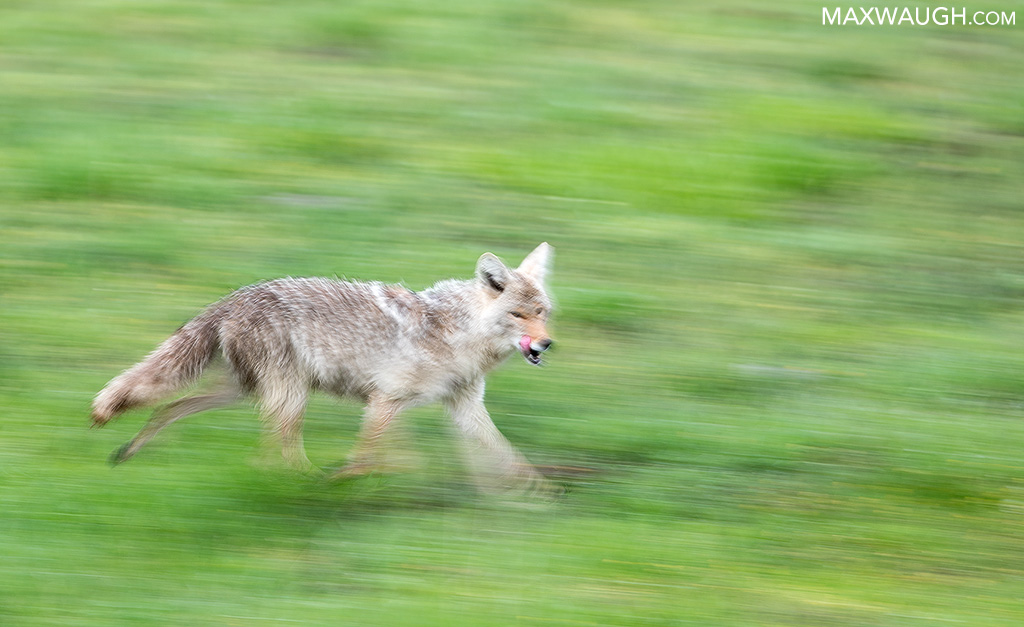 Overall, it was really quiet.  Seems like things have slowly died down following Memorial Day Weekend (which may as well be considered a 6-day weekend based on the crowds), but it’s been a slow decline in tourist numbers over the course of the week.  Maybe the scary weather played a role.

Regardless, I thought something was occupying people’s attention somewhere, because the roads from the west were pretty empty.  I suppose I was right.  There was a small group of cars pulled over past Calcite Springs, where a black bear grazed right near the road. 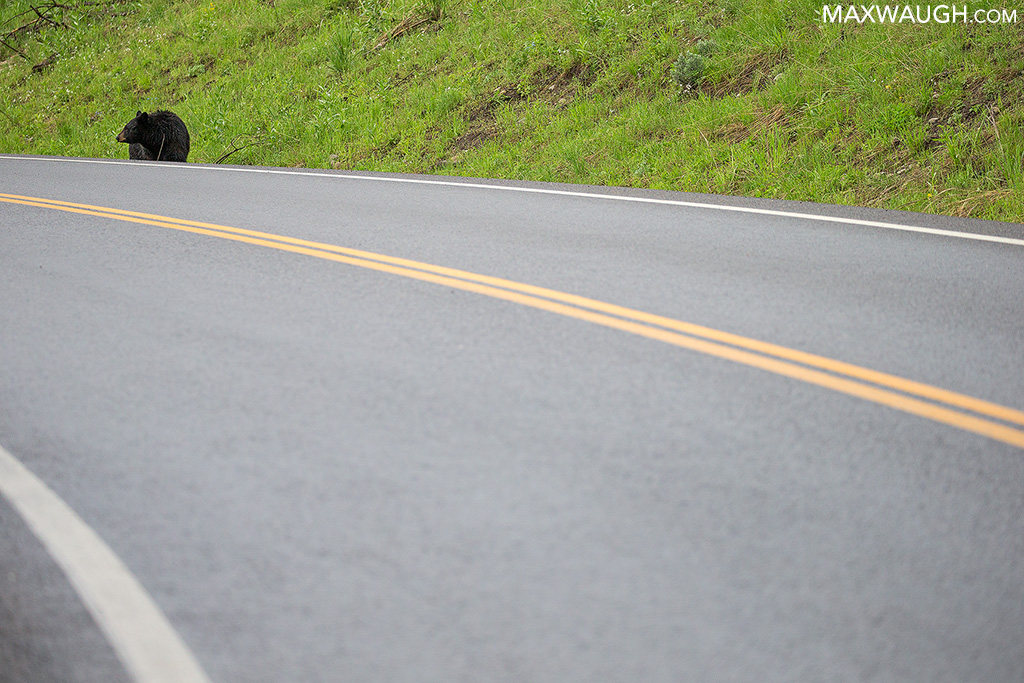 I waited for a while to see if she’d come closer (there was no room in the pullout directly opposite the bear), or would perhaps bring her cub out of a nearby tree.  But neither scenario materialized very quickly, so I decided to move on.

I ran into friends Bill and Peggy down the hill, and we opted to go for a hike.  Up the hill from Roosevelt, past the cliff overlooking Lost Creek Falls, and then on to the Lost Lake Trail.  We did see a shy black bear (I suspect it was the younger solo bear I’ve seen a few times) and a mule deer.  By the time we descended to the Roosevelt Lodge area, rain was beginning to fall.

There wasn’t much I could see or do at that point (aside from dry out in the car), so it felt like time to head for home.  On the way, I endured another one of those situations where three extra seconds make all the difference in a great wildlife photo op.

I was driving through the east end of the Lamar when I spotted three birds: two Red-winged blackbirds I had seen earlier and a Common raven.  The raven had invaded the blackbirds’ treasured “wetland” territory (they’re really digging all the new ponds created by this rainy weather), and it was obvious they weren’t happy with the larger bird’s presence.

I ground to a halt, but by the time I could drop the window and grab my camera the action had commenced.  The blackbirds had harassed the raven enough that it took off, and one of them chose to give chase.  They were coming right at the road, with the blackbird riding the raven’s back in mid-air.  It’s a scenario I’ve seen documented in photos a few times, but I’ve never had a chance to get it myself.  By the time I could even snap one belated frame, they were past my windshield and off into the valley.  Three extra seconds!

My errands and appointments at home took much longer than expected, so I didn’t make it back into Yellowstone until after 3.  Even if the weather hadn’t been terrible, the hike I’d hoped to take wouldn’t have been possible due to the late start.  As it was, the skies opened up and it was gray and miserable.  I didn’t make it past the Lamar Valley before turning for home, figuring some packing and prep for my impending move to Gardiner would be a better way to spend my time.

At Warm Creek, there was a younger moose grazing in the open.  It was the last sighting of my “free” week in the park. 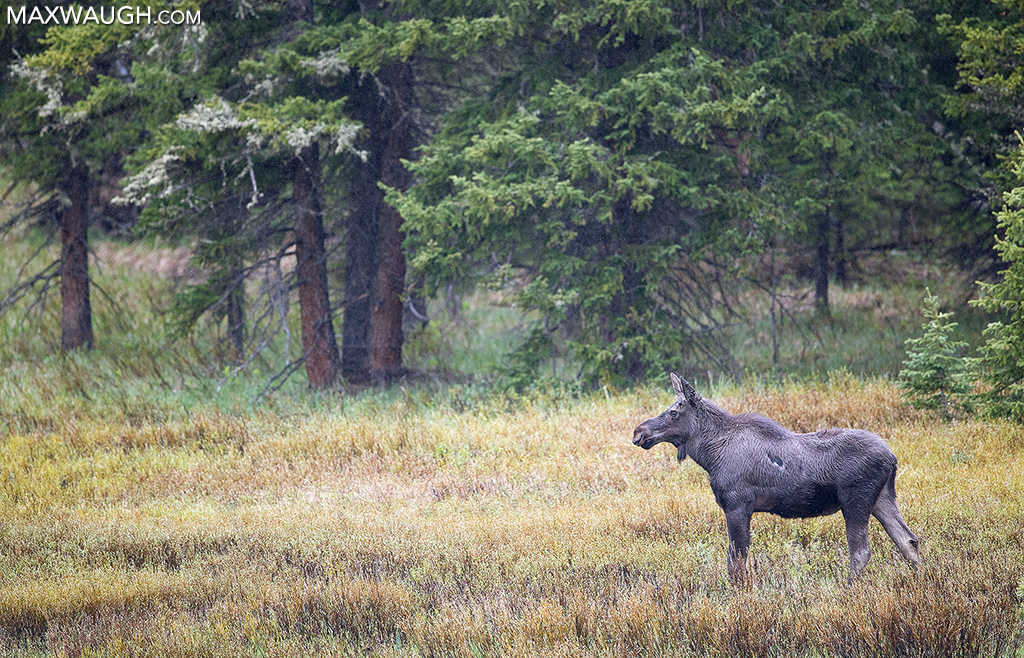 Saturday was Moving and Pick-up Day.  I had to leave Silver Gate, drop supplies off in Gardiner, pick up supplies and clients in Bozeman, and bring them all back.  Sunday marks the start of our big tour adventure!  With the storms gone for now, it will hopefully be a fruitful and dryer week.

My 2018 spring photo tour kicked off with a great day in the park.  We got a “late” start at 5:30.  It was much brighter than I was used to mainly because there wasn’t a cloud in the sky (quite the opposite from the previous week), but our timing was just fine.  We arrived at the Petrified Tree drive to find our first black bear in morning sunlight.  It was pretty far away, but my group was eager to start taking photos.

Next we headed up the Tower Road.  The black sow with triplet cubs of the year had been active the day before, so I hoped she’d be out in her traditional stomping grounds.  And that proved to be the case.  We found her grazing in the lower bowl, still shaded by the northern hillside.  The cubs weren’t poking out of the tops of any trees, but we soon saw them at the base of one of the thicker pines, napping.

It was a waiting game at this point.  Rosie grazed for a bit, and then went and joined the cubs for a nap, largely out of sight.  We surmised that maybe, just maybe, once the rising sun hit them they might stir.  That isn’t exactly how it played out, as they continued to nap, shift a bit, and nap some more.

We’d been waiting for some time, close to two hours, and I was ready to call it when they finally moved a bit.  Mother bear sat up and nursed the cubs.  All still out of view of course, but I figured we’d finally get them in the open after that.

Our patience was rewarded, as the sow came out to graze, slowly heading uphill, which encouraged the cubs to follow.  There were a lot of trees blocking the view, and the burgeoning crowd was strategically picking out precious real estate with open windows through the trunks and branches.  Meanwhile, the lone ranger on duty had his hands full, but was doing a good job keeping cars moving and parked properly, and herding bear-watchers over the white line to safety.

We played leapfrog as the bears continued to move.  It was some time before many of us started to get clear shots, but eventually the opportunities came.  The cubs climbed a few different trees, and finally we had a magical moment where they climbed one close to the road with no obstruction. 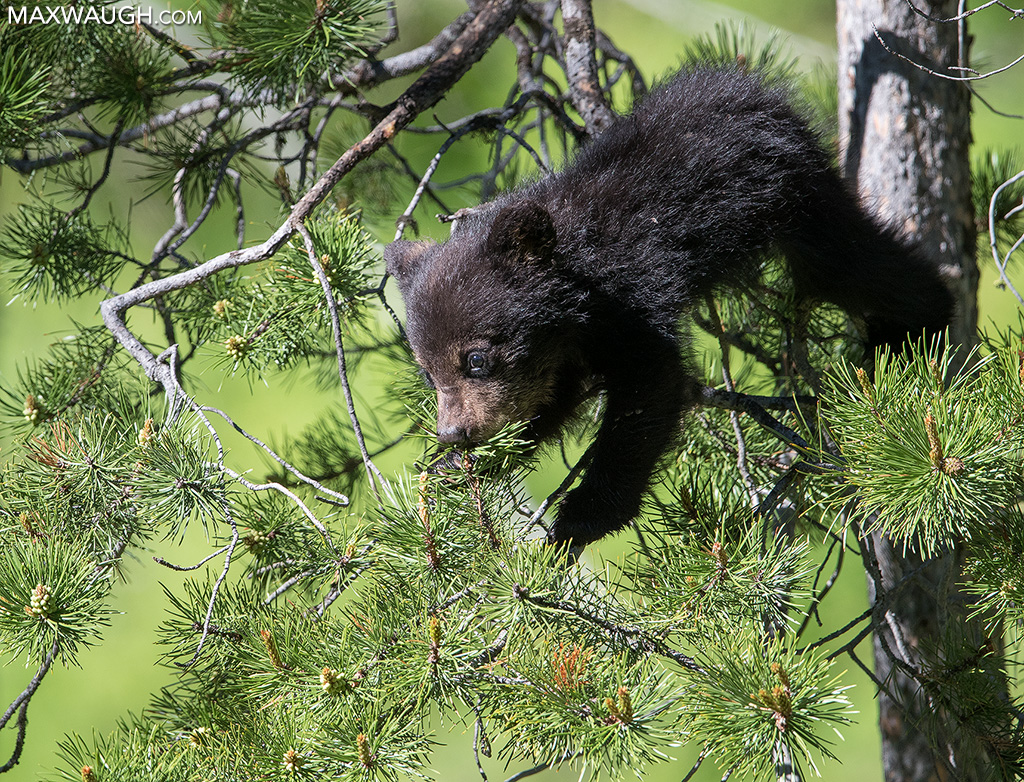 Everyone was quite well-behaved and rewarded as the ranger ensured everyone gave the family ample room while still having a chance to nail some good photos.

Eventually, as the bears approached the pullout where I had parked our van all those hours ago, we determined it was time to move on.  The encounter had taken up a good chunk of the morning.  It was already late, and warming up, so I wasn’t sure we’d get much more good photography in for the next few hours.

Still, we made it work.  We stopped briefly at the osprey nest in Lamar Canyon and found other subjects (including the bison-speckled Lamar Valley) to shoot on the way to the northeast. 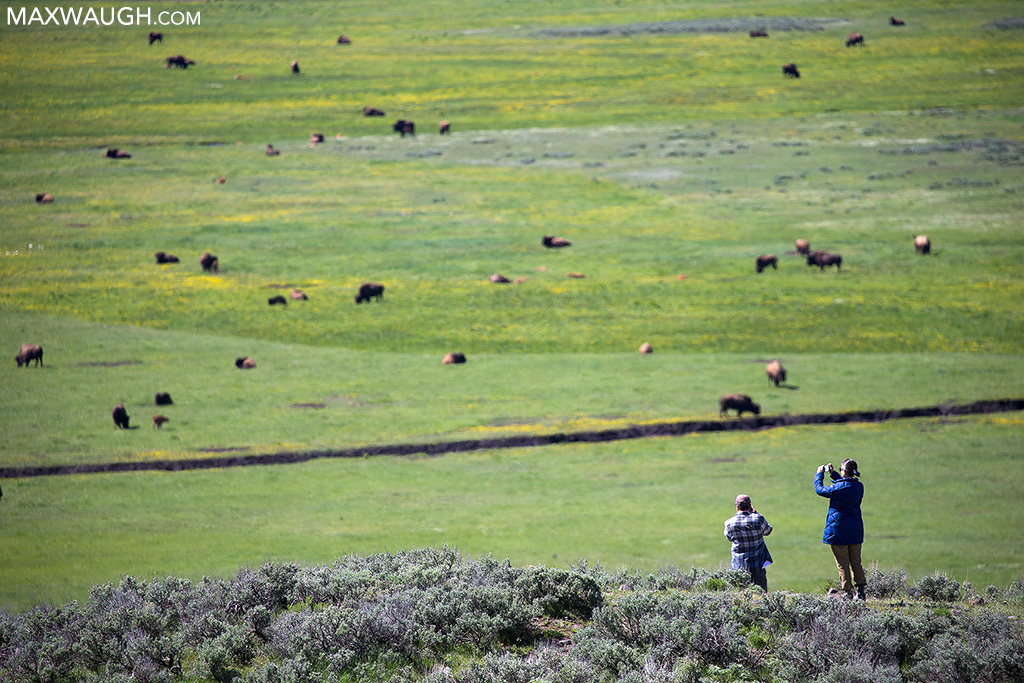 It was already so late in the morning by the time we hit Pebble Creek that I decided we could head all the way to Silver Gate for lunch (and, um, maybe some ice cream).

We picnicked at Stop the Car, loaded up on milkshakes and checked for moose (not out today) before turning around.  Though it was still hot, sunny and bright, we found excuses to stop for pronghorns that were stalking a coyote, a pronghorn buck near the road, bighorn sheep and a coot nest in Little America, and a collared cinnamon black bear at Elk Creek.  There was another black past the Petrified Drive (possibly the same once we saw first thing in the morning), and Rosie was on the far side of Rainy Lake, with onlookers were confined to far pullouts.  One last push through the Lamar and back, and then I figured we’d head home following this long and fulfilling day.

Yellowstone had other plans.  There was a pronghorn fawn near Roosevelt (my first this year), which stayed a bit too far out of range for photos despite our patient stakeout.  After turning around down past the bridge, we were approaching Tower Junction when I spied a few tourists way off on the Tower Road checking out something below them.  First thought: fox.  And it was.

After it disappeared over the hill, we were really, truly going home.  Until we spied the collared cinnamon bear in a tree.

I thought it was a bit odd that a big chunk like that would settle in for an evening slumber up a tree (something more common with younger bears that are still getting used to a solo lifestyle), but remarking that it may be our only big bear in a tree this trip, I thought we should snap some quick photos.  Parking down the hill, we climbed back up just in time to see the bear descending, just as a male and female bluebird flew in to watch it go.  So we may have just missed a nest raid (something I’ve seen a number of times from black bears these last few years). 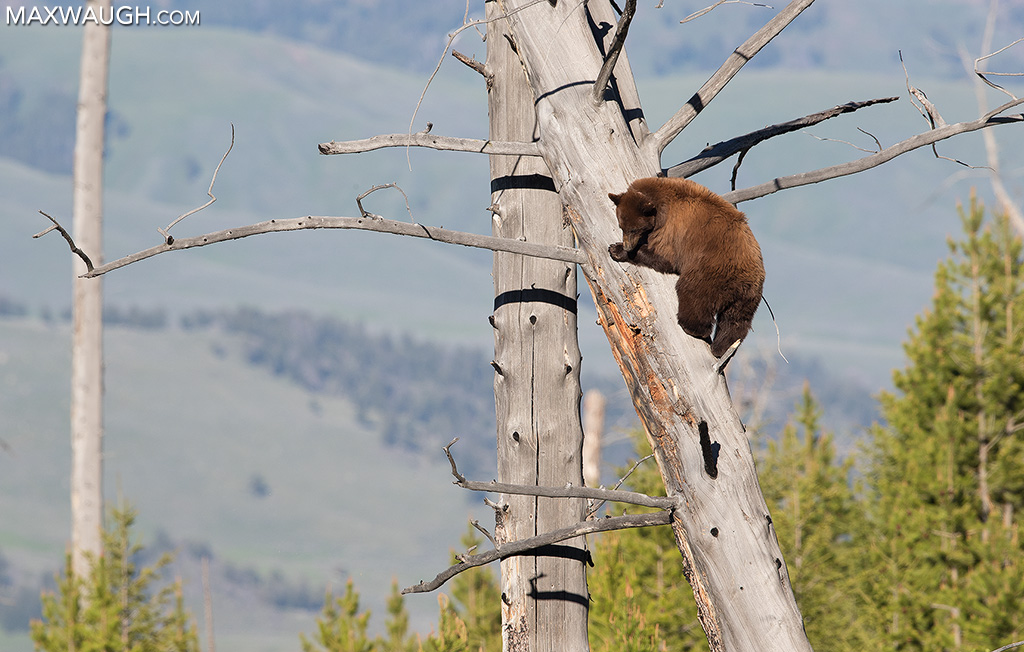 Oh, and there was one more black bear near the Blacktail Drive entrance on the way home.  Ho hum, we didn’t stop.

That’s a pretty good start to the tour.  It’s all downhill from here, right?