Thus far we’ve carried on a pretty good streak of fulfilling my clients’ wildlife goals on this tour.  We’ve produced a lot of “firsts” and some thrilling moments already this week.

Still, I wasn’t sure of our chances of landing our next goal: baby moose.  The sighting late the previous evening had proven the rumors to be true: there was a moose with a new calf somewhere in the northeast.  But whether they’d be in one of the open meadows in the area was unpredictable.  Everywhere else is dense forest, the roads have little to no shoulder, and there are infrequent pullouts.

Leaving at 5:15, we made our way along the north road toward the Lamar and beyond.  The drive was pretty smooth aside from a couple slowdowns for bison, so we soon ended up along the stretch where the moose had been seen Tuesday.

I gave my clients a heads-up to keep an eye out, and almost immediately I spotted a moose ahead of us… just as one of my clients exclaimed “baby moose!”  But she was looking back where I had just passed, and the moose I saw was up ahead still.

We’d ended up with more moose than we bargained for.  One ahead and another behind… with two calves.  Twins!

All of the moose were stationed along Soda Butte Creek quite close to the road, so the group was able to snap some nice photos while I looked for parking.  Miraculously, there was a parkable shoulder nearby, so I was able to get safely off the road (while a number of other vehicles simply sat running in traffic).

The mother moose didn’t appreciate the presence of the other adult, which appeared to me to be a younger individual, perhaps a calf from a previous litter. 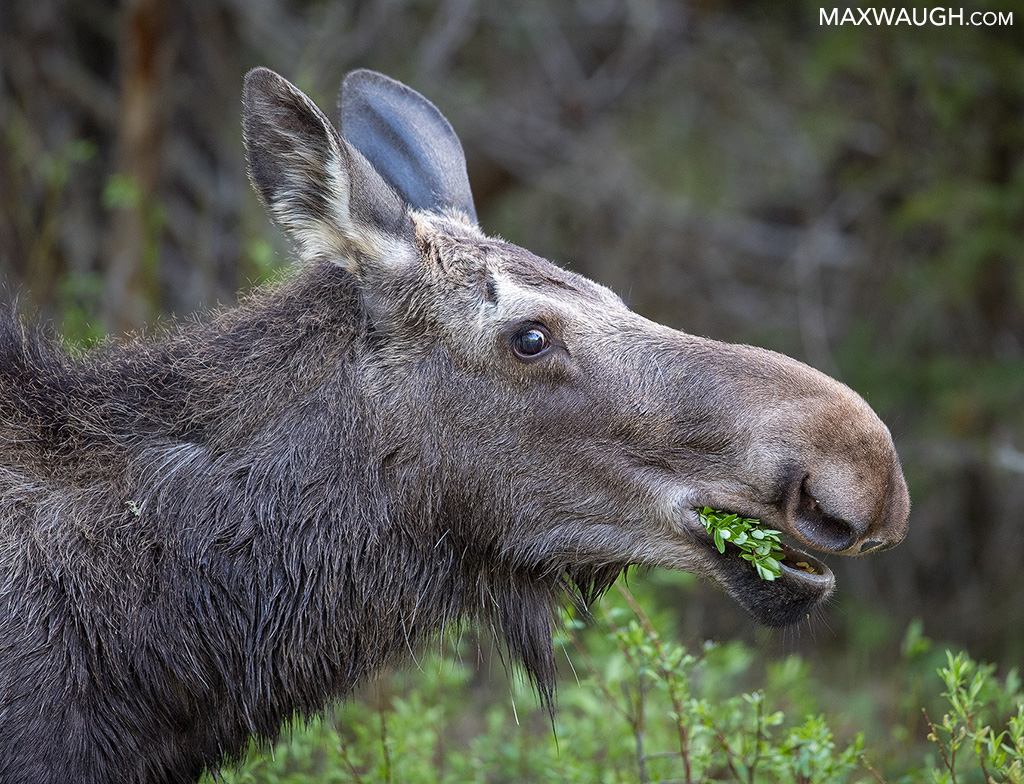 So Mom was already antsy, and the gathering crowd didn’t put her in a better mood.  I felt it was best to leave them be, so we packed up and traveled back to the Soda Butte Picnic Area… just as another moose showed up in the far meadow there.

This time it was a bull, with larger paddles than Tuesday’s Silver Gate bulls.  It kept its distance as it grazed, so we got some far shots before we packed up.

It was great to achieve another of our goals, and it turned out to be the highlight of the day.  We next hiked up to Trout Lake to find another animal on our wish list, but the otters never appeared there or at Buck Lake.

The afternoon was warm and quieter.  We traveled over Dunraven Pass (one coyote passed us as we descended) to have lunch at Otter Creek.  Then we stopped at Mud Volcano, where I needed a quick nap.  While I was dozing (all of about fifteen minutes), my clients found some baby Killdeer near the boardwalk, so we photographed them for a short period.

We checked Bridge Bay and Gull Point Drive, and then drove to Sedge Bay, where the grizzlies had been out.

It turns out we missed a big show in the morning, and the bears were well-hidden when we arrived.  We waited a short while, with some folks snapping an occasional bluebird photo.  Eventually Raspberry and Snow emerged from the woods and went for a swim far below us. 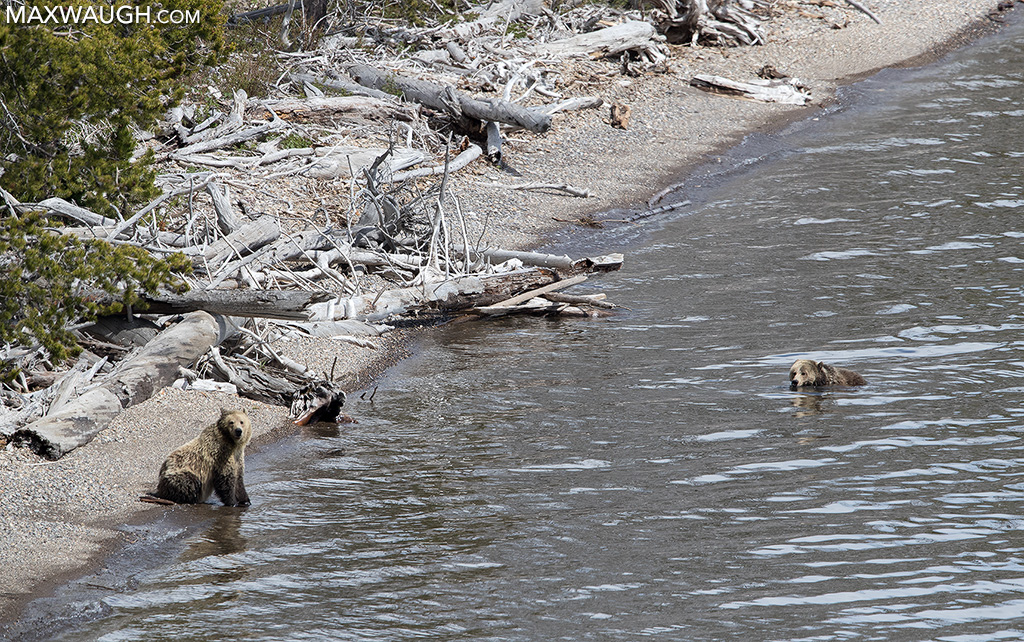 They walked the beach for a short time before traversing the brief stretch of the shady forest and then crossing the road northward.

It was time to start the long drive home (no more 10pm or later arrivals in Gardiner on this trip!).  We passed cinnamon bear jams south of Canyon and on the north side of Dunraven, after which we were free and clear the rest of the way home.  Hey, we actually had time to eat dinner!

One more day before the tour wraps up.  Let’s hope it’s another good one.

Thursday marked the final day of my spring Yellowstone tour, and a streak was on the line.  We’d somehow managed to set a major goal each day that was focused on a specific animal (with a willingness to happily accept everything else that came our way too), and somehow we had checked off each of those priorities so far.

Today’s goal only came about after a tip was passed on by some friends and former clients the evening before.  They’d learned of a coyote den, but directions were ambiguous, so it was left in their hands to find it.  We were invited to join the search.

Our morning outing in search of the den was filled with a lot of questions and head-scratching, mainly because we never saw any coyotes.  There was no way to tell for sure if we were in the right place, so we pieced the clues together as best we could and determined it would be best to try again later in the day.  And I didn’t want to waste our final morning just waiting around in what may have been the wrong spot.

Back on the road, my clients and I set about looking for photo subjects, but it was tough.  It was warming up and the light was already getting harsh.  A cinnamon black bear was well off the road near the Yellowstone River bridge.  A courting pair were seen in the distance at Elk Creek.  It was an active black bear day, to say the least.  We just missed a bear trio on the Slough Creek Road.

In Little America, we spied a coyote in stalking mode.  A falcon swooped overhead while we snapped photos of the song dog for a short time, but the ground squirrels caught onto her and emitted an endless string of alarm calls.  She gave up and walked away, but we stayed and photographed the cute squirrels standing at attention. 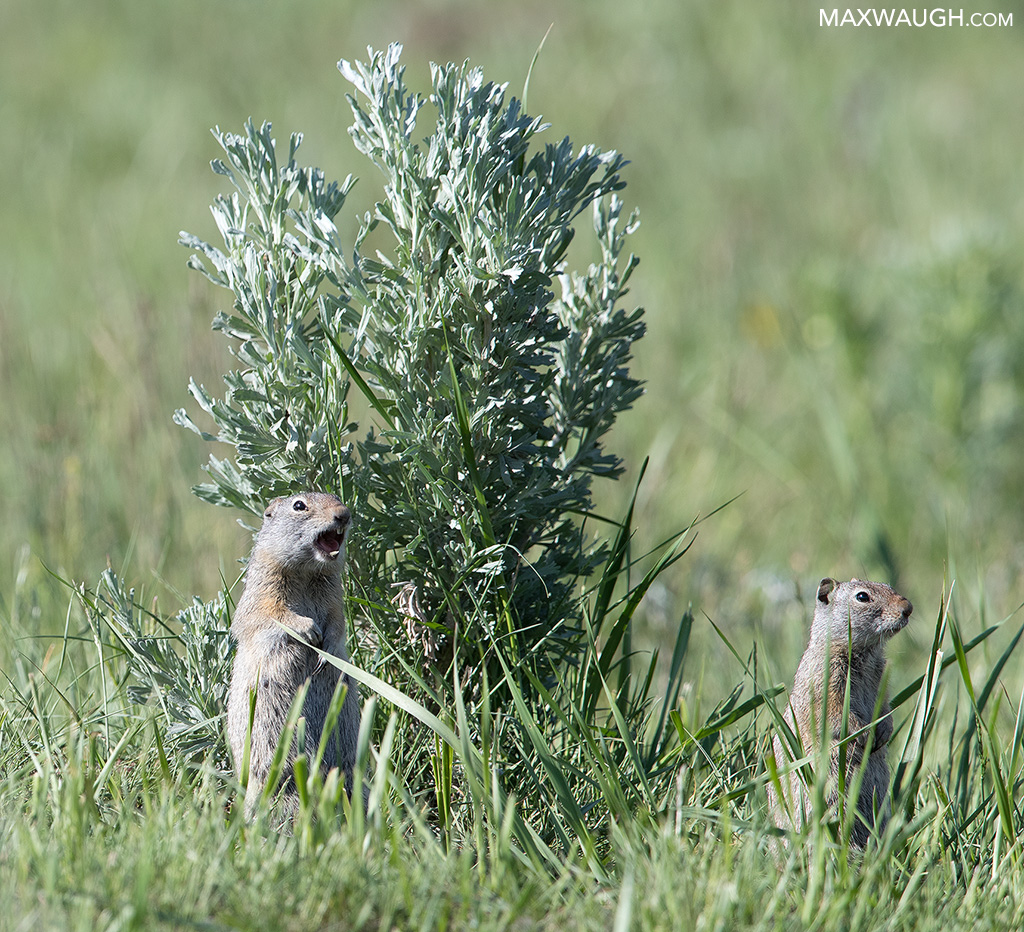 Naturally, this started a squirrel jam.  Distaste dripped from the mouths of new arrivals who realized we were only looking at “squirrels?!”

Following lunch, we made a few more stops.  A short bluebird nest stakeout preceded our return to the potential den site from this morning.  We quickly learned that we had guessed right when some movement behind the sage alerted us to the presence of a coyote pup.  Soon it emerged and descended the hill to a second den hole.  There, two more pups popped out. 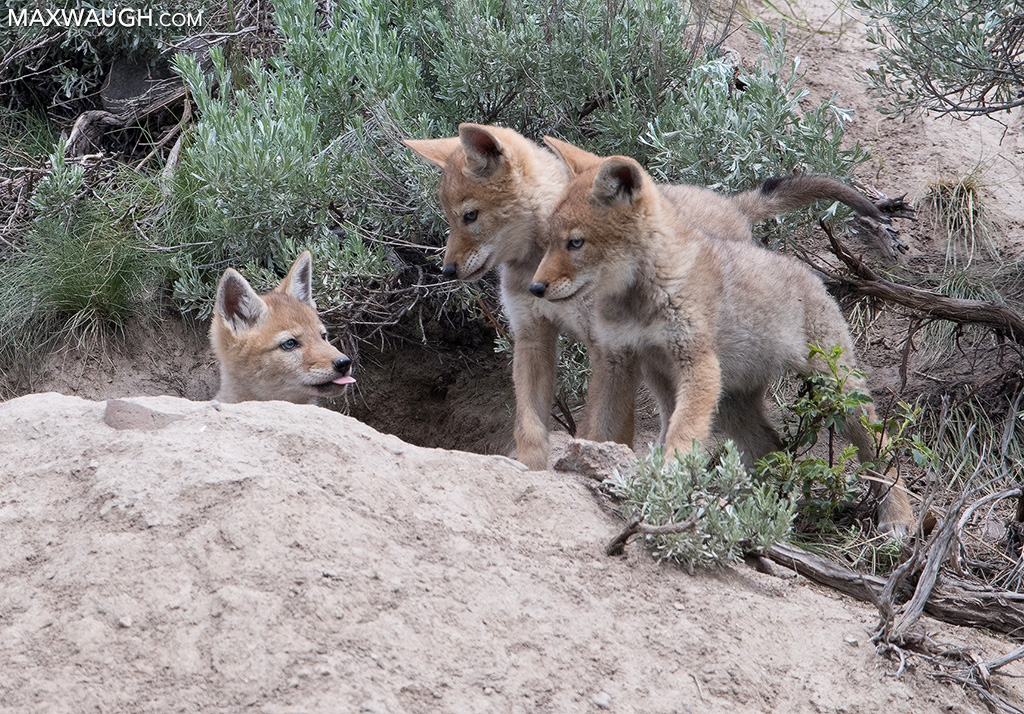 Eventually an adult appeared on the horizon… accompanied by a smaller set of pointy ears.  So there was at least one more pup up top.

It was a lot of fun photographing the family, but we packed up following a self-imposed time limit in order to give them some peace and quiet.  I was amazed that we fulfilled yet another quest on our final day.

The tour was not over.  We still had time for a final afternoon drive.  Some folks in the back had been clamoring for baby bears all day, and after hearing about at least one cub that was briefly seen on the Tower Road, I figured we’d have time for one last drive through before turning in.  But first, there was time for a final tour through Little America and the Lamar.

It was pretty quiet, but I wanted to make a quick foray into moose territory to see if we could find those calves.  We probably found them, but we can’t be certain.  A jam was brewing in the same spot where we’d seen them the previous morning, but folks were walking back a ways to peer into a clearing that we couldn’t see from the road.  Since there were no parking spots along that narrow stretch, we had to leave.

There was still an hour or so left to find bear cubs.  A longshot probably, but we’ve been hitting long shots all week.  Driving past Calcite… hey, whaddya know: a little black cub sprinted across a clearing.

So yeah, we got one last cubby shoot for the folks in the back of the van.  This time it was the Angry Sow and her lone offspring.  Though it took some time for them to come into the open, the resulting photo session was a great success, and the perfect way to end the trip. 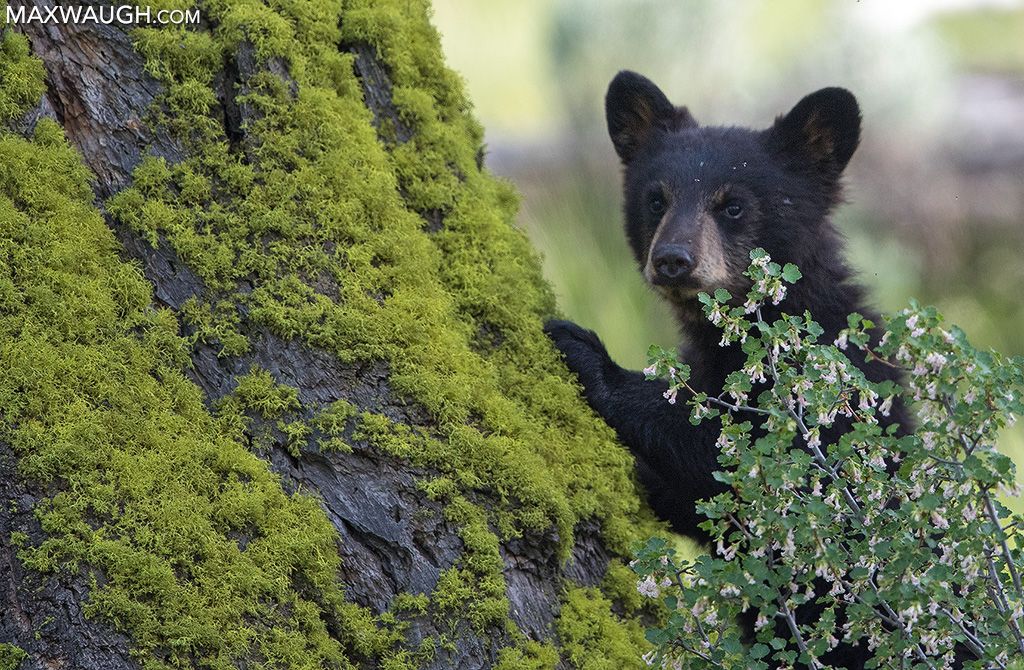 Every spring trip yields some great sightings, but this one was truly unique in that we achieved specific (often difficult) goals every single day.  And what a great group of clients to share it with.  I’d like to express a big thanks to Carl, Doug, Feli, Leslie, Miyuki and Tom for a truly wonderful week.  Thanks also go out to those who helped me out in varying capacities on this trip: Zack and Cortney, Cheryl at the Stop the Car Trading Post, Linda and Reg, and Judy and her accommodating staff at the Yellowstone Super 8.

And thanks of course to all of you who time to read these reports!

Want to join me on a Yellowstone spring photo tour?  There’s still room on next year’s trip!  Learn more here.