The Trip of a Lifetime: Remembering Michael Kaye 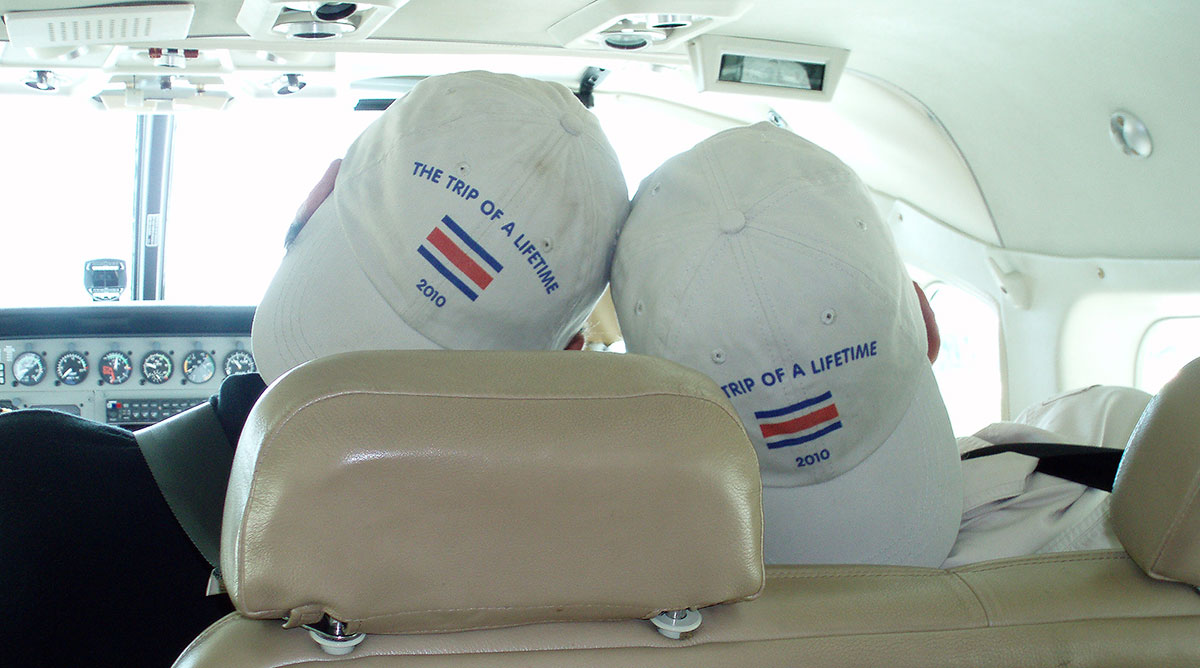 Last week I learned about the passing of Michael Kaye.  Michael was the founder of Costa Rica Expeditions (with his wife Yolanda) and a pioneer in the adventure ecotourism industry.  He was also an inspiration to a fresh-faced photographer who was just starting out as a full time professional guide and so-called “adventurer” nearly a decade ago… and soon, a friend.

Forty years ago, Michael and Yolanda started Costa Rica Expeditions as a river rafting outfitter.  The company soon branched out, offering other adventures in that wonderful country for tourists, families and nature enthusiasts.  “Our goal is to create unique travel experiences that transcend conventional sightseeing and travel. Our dream is to promote the type of tourism which is mutually beneficial and nourishing to both the visitor and the visited,” Michael wrote in the early Eighties.

It was some time later before I made my own first trip to Costa Rica, but I was instantly hooked.  Jenn and I planned that 2005 trip on our own, but decided to book a stay at the Corcovado Lodge & Tent Camp.  This was our first introduction to Costa Rica Expeditions, which owned the lodge, and when I planned my return visit three years later, I contacted CRE to help arrange guiding and lodging in nearby Corcovado National Park.  I made a third trip in early 2010 with the company’s help, again focusing on Corcovado, a massive park that remains the best place I’ve ever visited for rainforest biodiversity.

A few months later, I received an email from Michael.  He had been keeping tabs on me, and out of the blue presented an invitation to myself and a select group of other CRE clients to come back down to Costa Rica for a week-long visit on the company’s dime.  The goal: to bond with other travelers and brainstorm ideas and concepts that might help shape the future of tourism and conservation in the country.  Michael called this adventure The Trip of a Lifetime, which was as much a symbol of what he hoped to present to every client, much less our fortunate little group that came together that October. 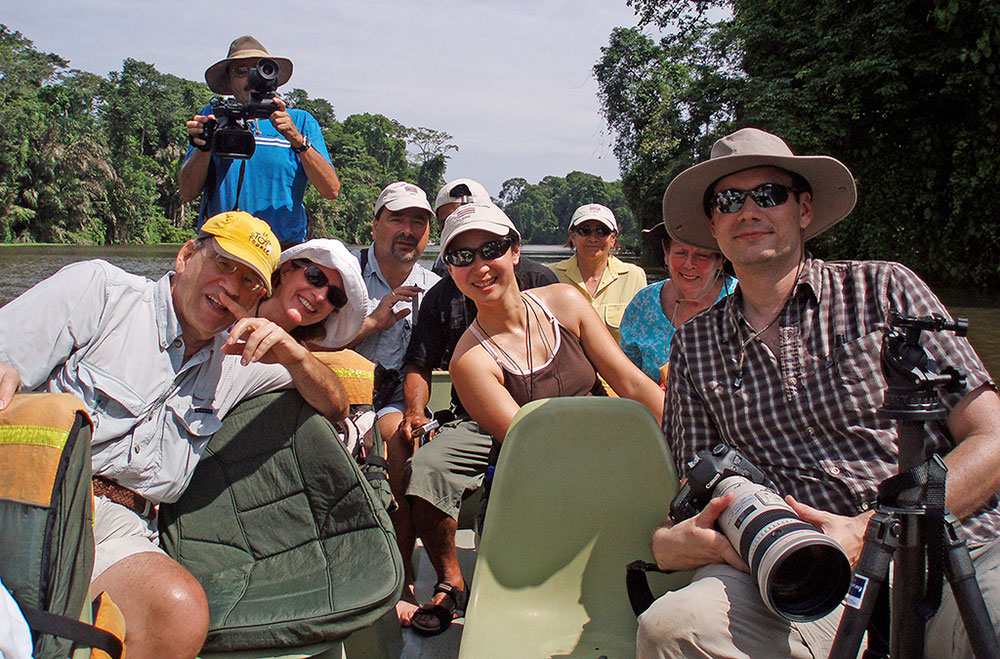 Michael Kaye (left) with the Trip of a Lifetime group. Photo (and hat photo above) © Cheryl Shnider.

When I mention the future of tourism and conservation being affected by our little trip, that might seem hyperbolic, but there’s no question Michael was a power player in the Costa Rican tourism industry.  Over the decades he had become heavily involved in the country’s evolution into a tourist hot spot, and he was constantly striving to preserve the country’s natural and cultural wonders.  On our Trip of a Lifetime, we had an opportunity to visit with Alvaro Ugalde, the father of the country’s national park system, and we also worked with Pro Parques on ideas for revamping the park service’s admission and permit systems.  It wasn’t just a leisure trip for us… Michael was putting us to work and getting us involved in his latest grand ideas.

And he had a lot of ideas!  That trip occurred right around the time that I took the plunge and became a full time photographer.  I knew by then that I would likely lead photo tours in Yellowstone, but it was Michael who encouraged me to do the same in Costa Rica.  A little over two years later I brought my first clients down to Corcovado and some of the other amazing destinations that I visit to this day on my tours, and I’ve been fortunate to make it back every couple years since.

In that time, I was fortunate to meet up with Michael and Yolanda, who hosted me at their home in San Jose during my stops before or after tours.  During these visits, Michael peppered me with ideas… and occasional questions I suppose, but he always seemed to have his finger on the pulse of the travel business landscape, so I mainly sat back and tried to ingest it all.  He’d offer feedback on the trips I was leading, provide marketing (which I’ve always found to be the biggest challenge in offering my trips) advice and tell me stories about his history and adventures way back before I or many other tourists ever thought about visiting Costa Rica.

There’s something about stories from the old frontier, and that’s how things were like back before “ecotourism” was ever a thing.  I could only listen in amazement when he described hiking across Corcovado in the early years.  I barely survived walking part of the way, laden with photo gear, during my first trek into the park.  He made it sound easy.  And, since one isn’t even allowed to make the same traverse Michael conquered decades ago due to today’s stricter park regulations, I could only daydream about what that would be like.  His adventures in those days are what I always longed to experience, so I forced myself to live vicariously through his stories.

Michael told me about his early days with Felipe Arias, the best tracker I’ve ever worked with.  He had heard of this infamous character named Felipe, who had a shady reputation in some circles, but who also commanded an immense amount of respect and awe from others for his tracking abilities and experience.  Felipe was the guy rangers would send into the jungle to find lost tourists.  So Michael set about finding him, and eventually hiring him.  First as a boat captain for fishing charters, but he also wanted Felipe to work as a guide in Corcovado.  The only problem?  Felipe didn’t speak any English.

So Michael sent him to America!  He arranged for Felipe to fly to the States and stay with a family of past CRE clients.  They lived in Minnesota, quite a culture (and climate) shock for someone making their first trip out of Costa Rica.  Michael arranged for the flights and promised his new guide that he would be there in Minneapolis when Felipe stepped off the plane.

Michael was at the gate when the plane landed… but there was no Felipe!  Somewhere along the way, Felipe couldn’t find his connecting flight and instead boarded a plane to… Denver.  Apparently, gate agents weren’t paying very close attention to boarding passes in those days!  Ultimately, Michael worked it all out and got Felipe to Minnesota.  Three months later, Felipe returned to Costa Rica ready to lead English-speaking tours.

The story of Lost Felipe, a friend to this day and my guide whenever I return to Corcovado, always cracks me up.  But it also exemplifies the generosity and care Michael displayed time and time again.  I certainly felt that whenever he and Yolanda welcomed me back to San Jose.

Michael never really retired from Costa Rica Expeditions.  He remained heavily involved in their marketing efforts, while spending a lot of his remaining time fighting for sustainable practices and pushing the government to keep improving their relationship with the environment (this in a country which is already considered a world leader in conservation).  If and when he did take a break from it all, Michael and Yolanda were spending weeks at a time back in his native New York, bicycling or visiting with family and friends (including our TOAL reunion in 2012).  He never seemed to slow down. 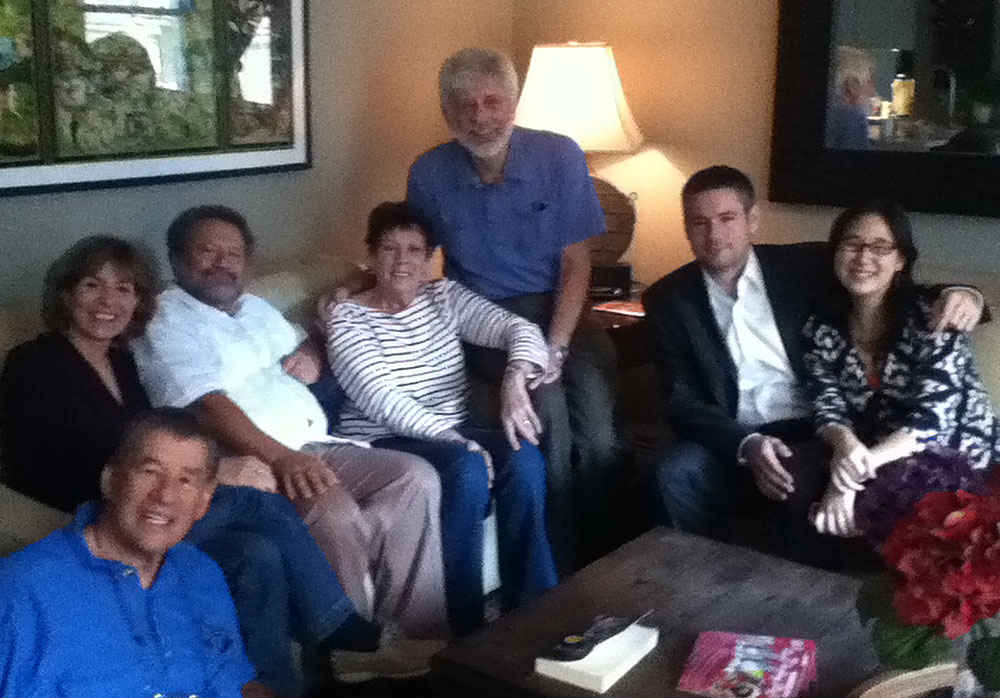 The Trip of a Lifetime reunion in New York in 2012. Photo © Cheryl Shnider.

Though I only got to know Michael a little over the last decade through these brief visits, his support and mentorship was meaningful, and his knowledge and experience as a lifelong adventurer was inspiring.  I have no doubt that Michael lived the Trip of a Lifetime.

“If you live every day of your life as if you are on a wonderful journey through an exotic, endlessly fascinating, strange land—you are.” – Michael Kaye