As you know, I recently wrapped up a photo tour in Brazil. The tour spanned two full weeks, split between the southern Amazon and the Pantanal.

The Amazon portion of the trip was a “scouting extension.” I had never been to this part of Brazil and wanted to scout it as a future tour stop (especially since the extension location I scouted in 2017 didn’t pan out), so I invited my clients—who had signed up for the Pantanal portion of the trip—to join me at a discounted rate. They all accepted.

It was a good choice, as the Amazon paid off with some truly unique sightings and different species from the Pantanal. It made for a long, but very fruitful trip, especially after the Pantanal came through in its usual fashion: with loads of jaguar sightings and encounters with a lot of other cool mammal and avian species. By the conclusion of the trip, we were all tired, but extremely happy with the sheer volume and diversity of species we had encountered. I shot over 20,000 photos, which is a lot for me for a trip of this duration. We counted 35 mammal species and over 175 avian species seen.

As I sat in my office plowing through thousands of pictures, I realized this is one of those epic trips that deserves a Top Moments type of countdown. Back in 2015 when I spent six weeks in Yellowstone, I published a Top Ten Wildlife Encounters of the Trip series (you can see them here, here and here). I wanted to do the same for this one. In this case, I’ll do a Top Six.

Here are five of my top six wildlife encounters from Brazil. Check back next week for the #1 moment, and in subsequent weeks for the full set of Brazil images, which will be added to the archive soon.

I adore tamanduas, which are medium-sized tree-climbing anteaters. Over the years I’ve seen a number of northern tamanduas in Costa Rica, and last year saw my first southern tamanduas when I scouted the Pantanal. It’s a cute yet odd-looking critter with a stylish fuzzy coat and big beefy arms. This time in Brazil, the tamanduas came through in a big way a couple times.

On our last night scouting the Amazon, we stayed at a hotel closer to the airport. This hotel was bordered by a forest reserve that had been spared from encroaching civilization, and is home to a few monkey species we had not seen during the rest of the Amazon leg. We actually saw those monkeys (at least three new species to add to our tally), but they were all fleeting glimpses, so in terms of photography this particular stretch of rainforest was something of a dud. Until we found a tamandua.

I had spotted one tamandua already on the trip, but a photo op never materialized. This encounter was different. The anteater climbed to the top of a small tree and decided to nap there, giving my clients an opportunity to get their first pictures of this species. 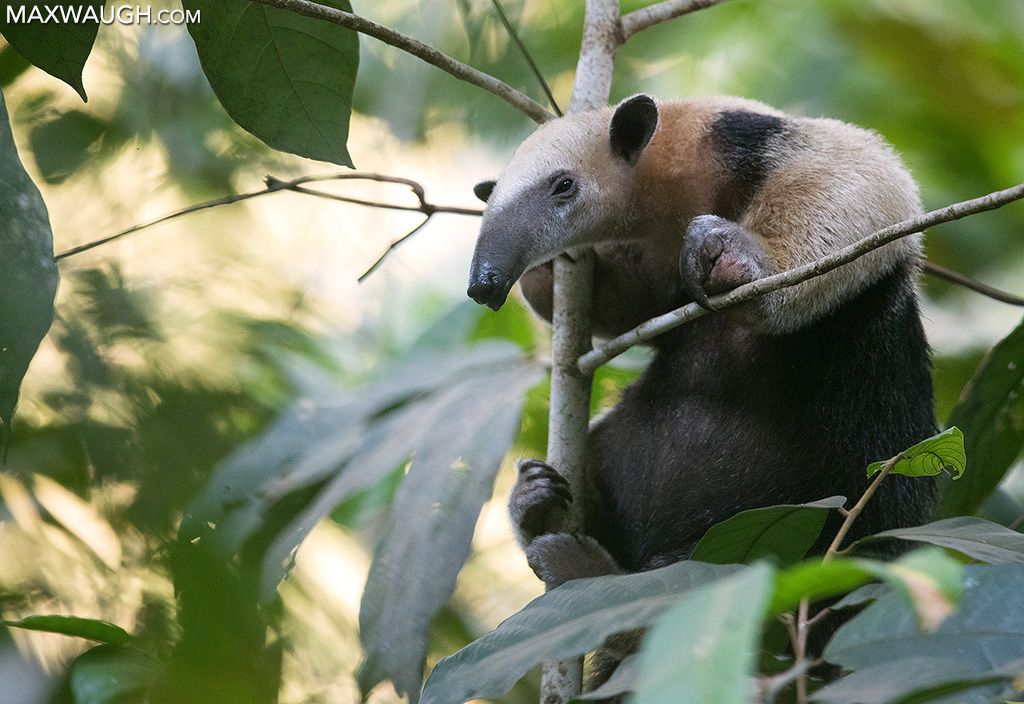 Fast forward to the next day, when we’d arrived in the northern Pantanal, a large stretch of wetland and grassy plains. We went out for our first night drive that evening. I had seen a couple of tamanduas during night drives last year, so it wasn’t a surprise when one appeared near our truck. What I didn’t expect was for it to linger, giving us time to pile out of our safari vehicle and snap some photos of it in the spotlight. 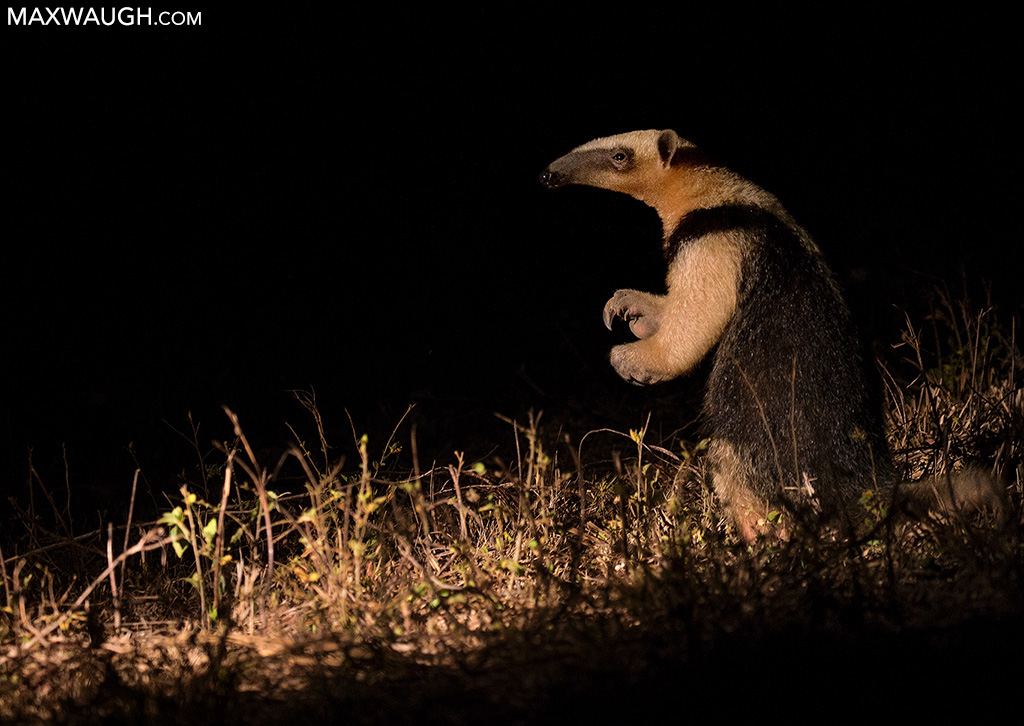 As an added bonus, it stood up on its haunches, clearing the long grass and giving us an even better view.

Jaguars are sort of the whole point of a Pantanal visit for most people. It’s the best place in the world to see them, and if you time it right, sightings are almost guaranteed. I saw plenty of jaguars last year, but was excited to share the experience with my clients, none of whom had seen these big magnificent cats in the wild before. But I was also hopeful for some different encounters than last year. Luckily, we had a few standout moments, from hunting sessions, to seeing multiple (grown) cubs, to seeing my first male jaguars. Here are a few of the more memorable encounters.

Our first jaguar find of the trip was very low-key. A courting pair had been found, but they were lazily slumped in the shade and dense thicket above a river bank. We got a few brief moments to photograph one of them as the sun disappeared behind the trees, but in general it wasn’t much of a photo op. So in some ways I was relieved when we finally found our next cat the following morning. She was out in the open and on full display. It was the moment that signaled to my clients what sort of photo opportunities might be possible with big cats on this trip. 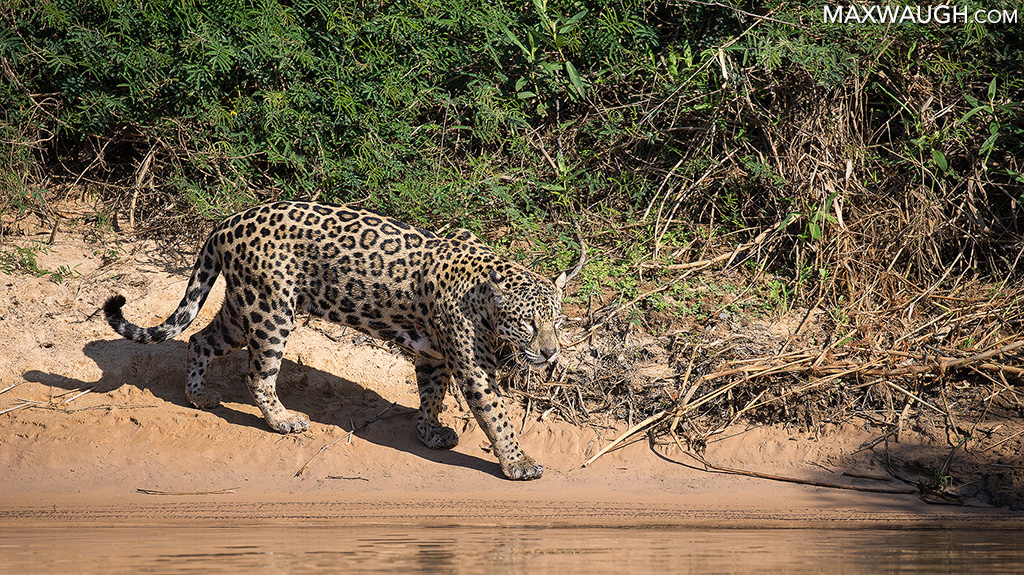 Eventually, once you get enough portraits of a subject, you start hoping to capture behavioral moments that’ll produce some different photos. Last year I got a brief view of a swimming jaguar, but that cat went away from us, so I never landed the swimming photos I’d hoped for. That was one of my goals this year, and on consecutive days we were fortunate to see jaguars go for lengthy swims at close range. 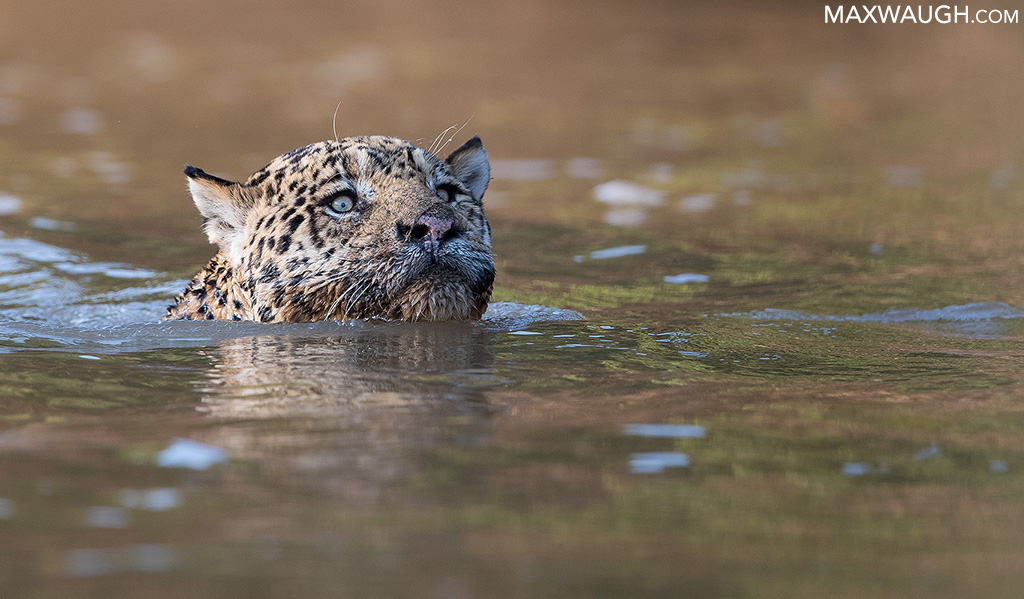 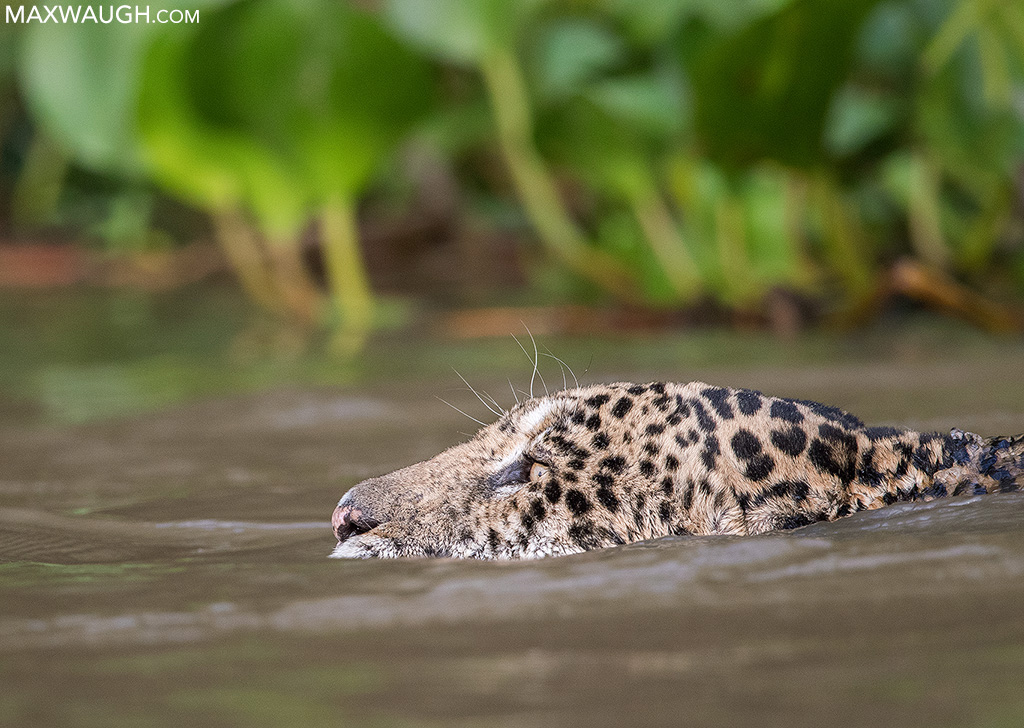 You see a lot of jaguars resting, and a fair number of encounters entail following a jaguar that’s exploring territory or looking for prey along the rivers (they’re on land while you’re in a boat the whole time). Many players can now get a nice casino bonus canada for a good performance. But often the dense vegetation makes clear, “clean” photo ops difficult to find. So I was pleased when we found a female walking along a stretch of open beach, giving us an unobstructed view of her entire body… the curled tail was a bonus! 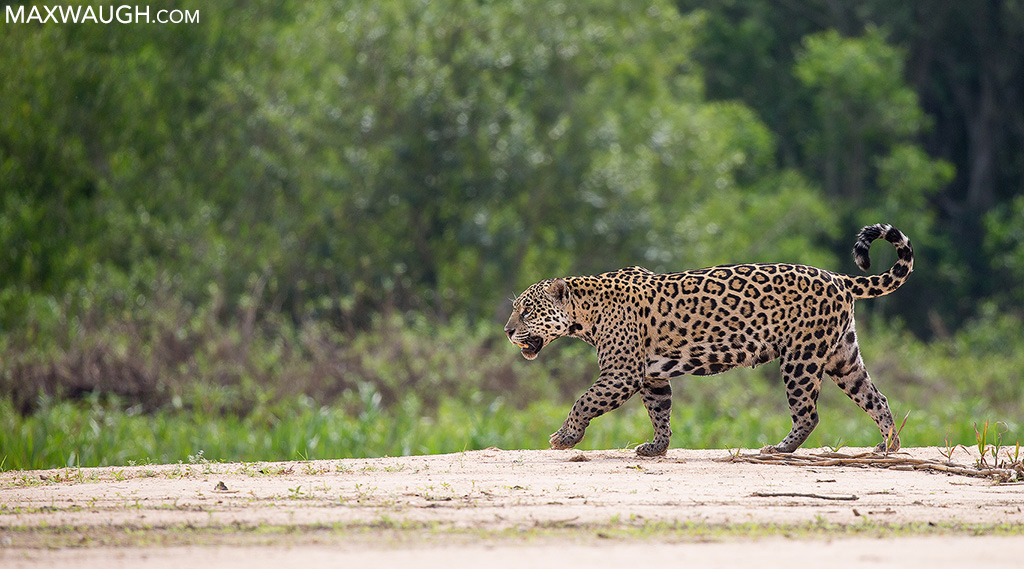 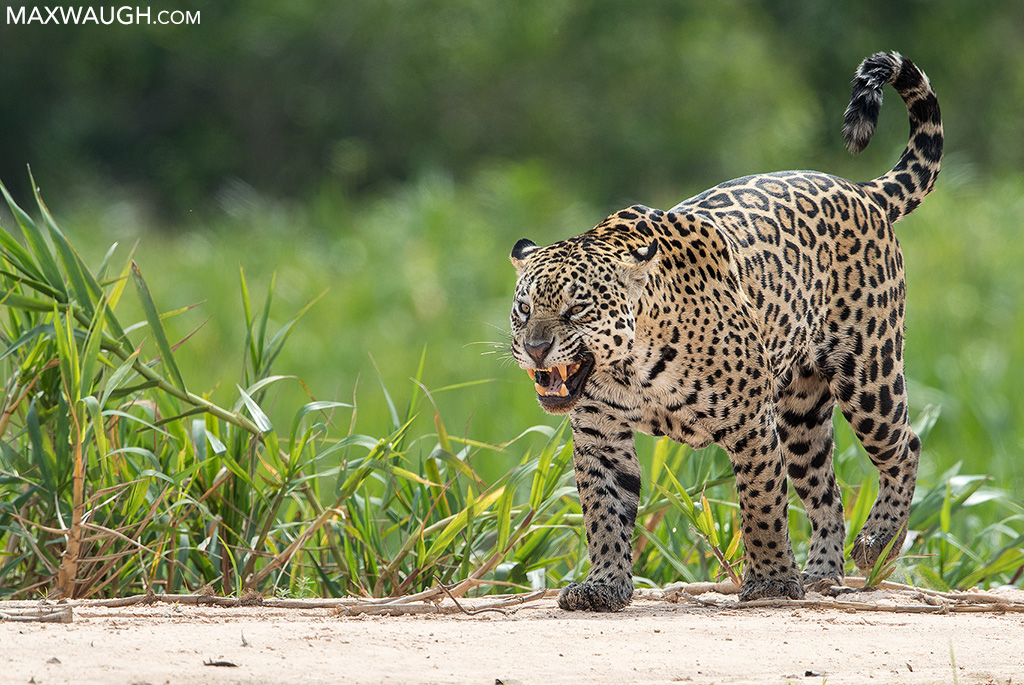 Despite the late morning light, we were helped by the bright sand of the beach, which acted as a reflector and lessened some of the shadows on the cat’s face and underside. Believe it or not, this may have been my favorite jaguar moment of the trip simply because such open views in a nice environment are so uncommon.

We saw eleven species of monkeys on this trip. Eleven! By comparison, the most I can see in Costa Rica—one of the most biodiverse areas I’ve ever visited—is four. Thanks in large part to the Amazon visit, most of the species we saw were new for me, though even in the Pantanal we landed a new species, the adorable and fierce black-tailed marmoset. Heck, we even had three different species of howler monkeys.

When choosing a primate highlight, it ultimately came down to our sightings of two endangered species only found in Brazil, the white-nosed saki and white-cheeked spider monkey. Both species were found during our stay at Cristalino Lodge in the Amazon, and it wasn’t easy to find them. The spider monkeys were known to hang out near the lodge, but it took several attempts before we finally found them. And even then, they were high up in the canopy, presenting some major challenges for photography. After a long session, we eventually had some closer photo ops, my favorite of which occurred when a few members of the troop huddled together to spy on us. 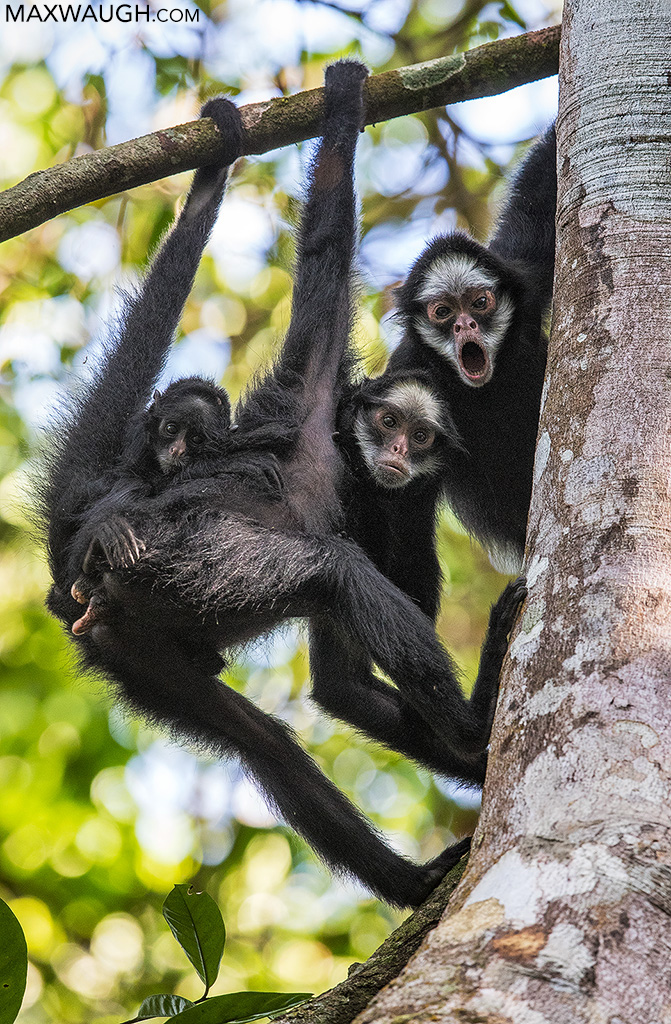 The white-nosed saki is, simply put, the coolest-looking monkey I have ever seen. 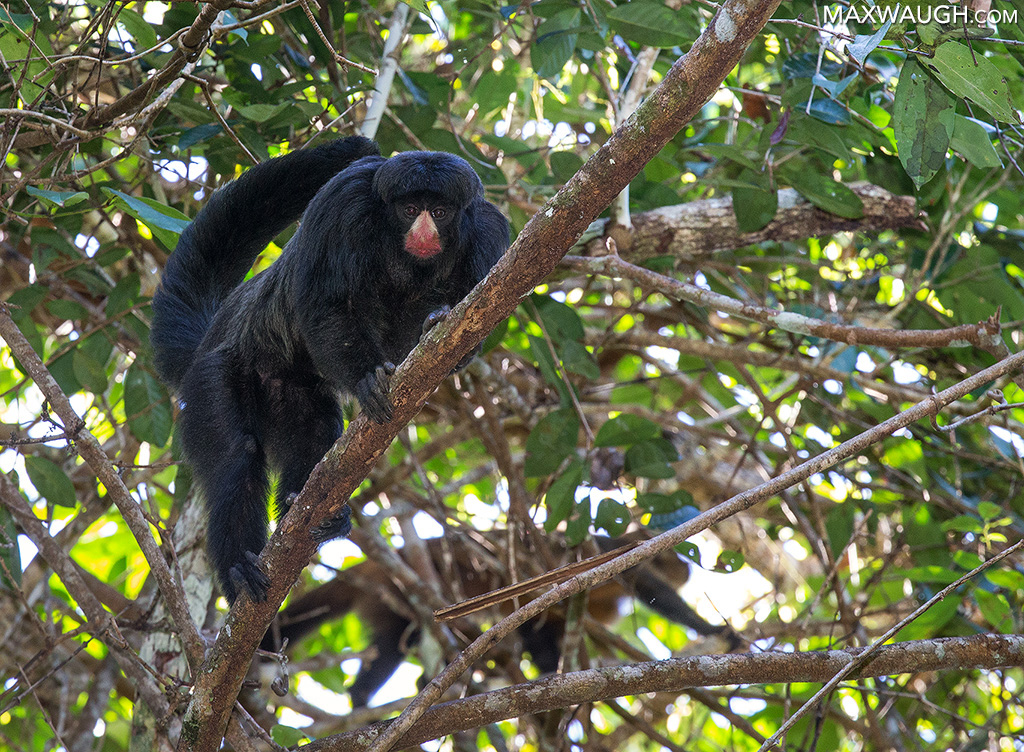 Given their shy nature, I felt fortunate that nearly everyone in the group landed one or two photos in the brief moments we had with them. Unlike other large New World monkeys, this saki doesn’t have a prehensile tail. It was also interesting to see that this troop had “adopted” a tufted capuchin (seen in the background above), which traveled with them.

#3: Channel-Billed Toucan… and the Moon

The trip had just begun and we were on a boat heading to the lodge when we spied a toucan perched high above the canopy. And hey, there was the moon, just behind it! 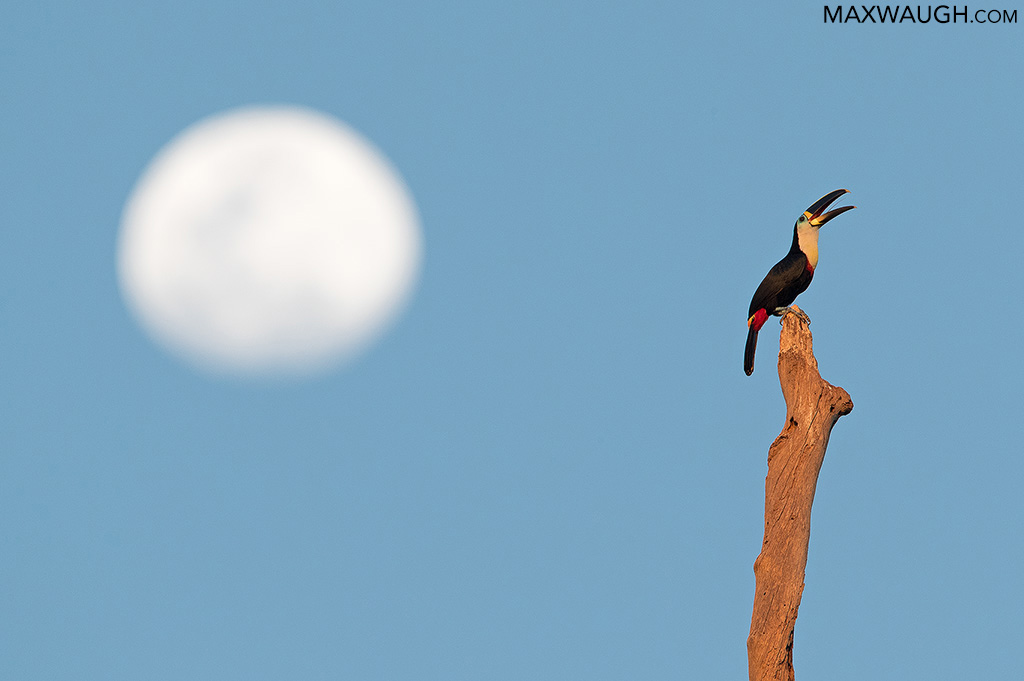 Then the maneuvering began, as we tried to align our boats properly so that we could get the toucan and moon together. Going back and forth a few times gave us a few chances, and even when things didn’t line up perfectly, the results were pretty fun to see. 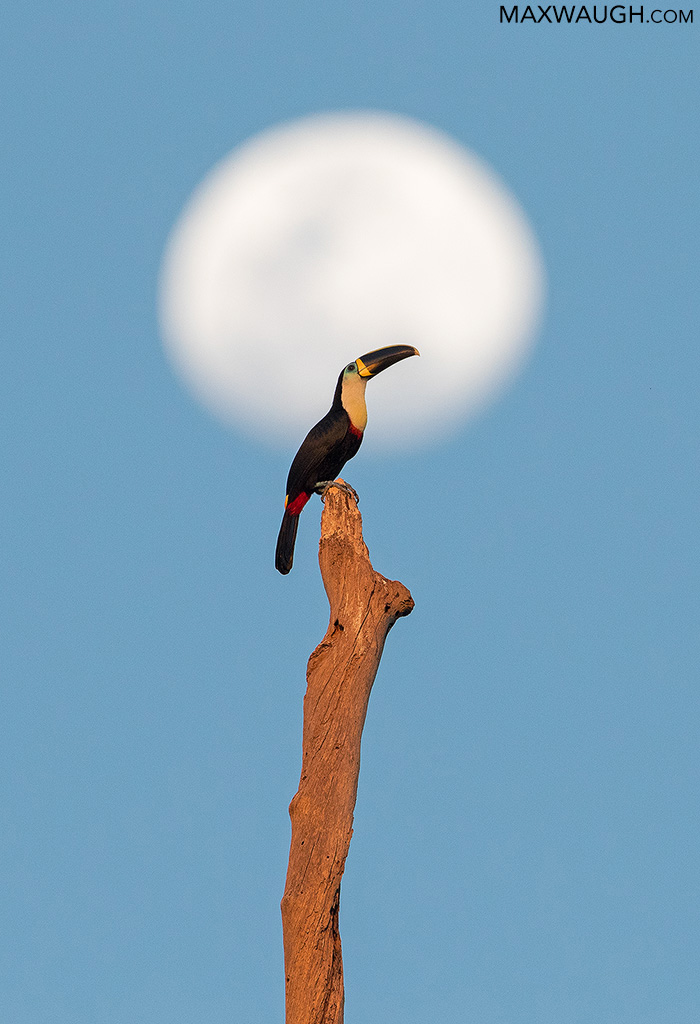 It soon became a running joke to try and get every elevated subject in front of the moon, but we never quite replicated the experience.

My second-favorite encounter of the trip landed this high on the list solely due to the fact that I’m obsessed with owls. It was a great trip for owls. We saw six different species, which is a trip record for me (I had five in Costa Rica earlier this year, and I think I’ve had a five owl trip in South Africa before). But the only new species was the Tawny-bellied screech owl.

We actually struck out with both it and the dynamic-looking Crested owl the previous evening during an Amazon night walk. I saw the screech owl briefly, but my distant photo was blurry. On our second night, we landed both birds. And the screech owl surprised us all by landing right above the trail. I had to take several steps back and remove my teleconverter from my 600mm lens… and as it was, I barely fit this small owl in the frame. 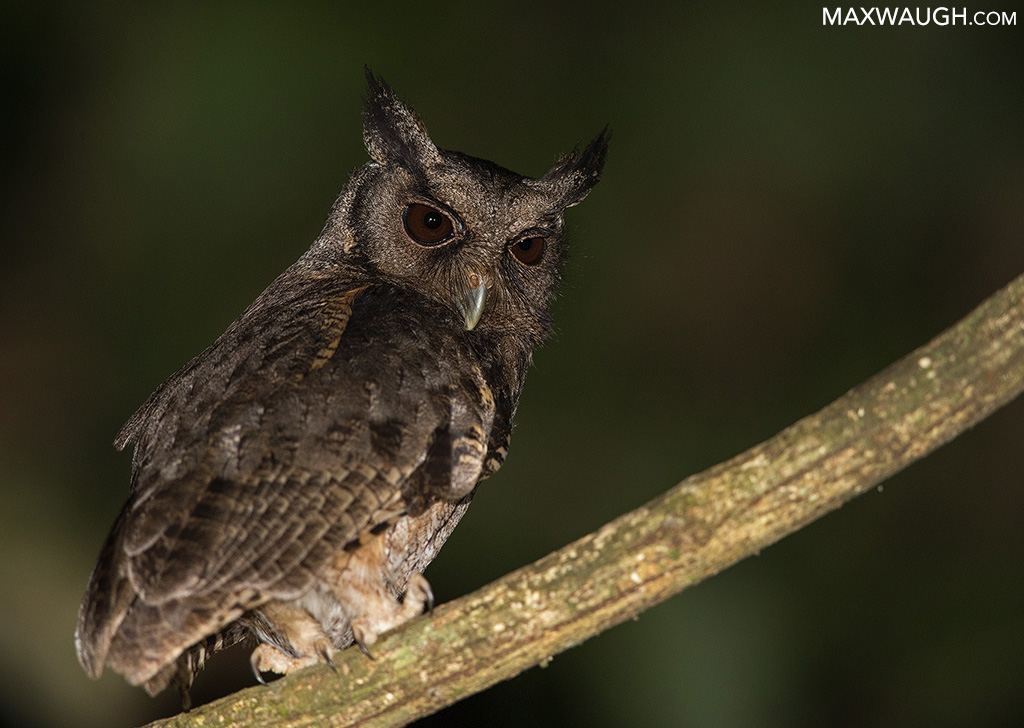 That wraps up most of the list. What about my #1 sighting? That deserves its own blog post, which I’ll publish next week. Stay tuned for that and the full set of new photos, which will be added to the archive soon!

Want to join me on my next Brazil adventure? I’ll be returning in 2020 to both the Amazon and the Pantanal. Learn more here and get on the waiting list now. 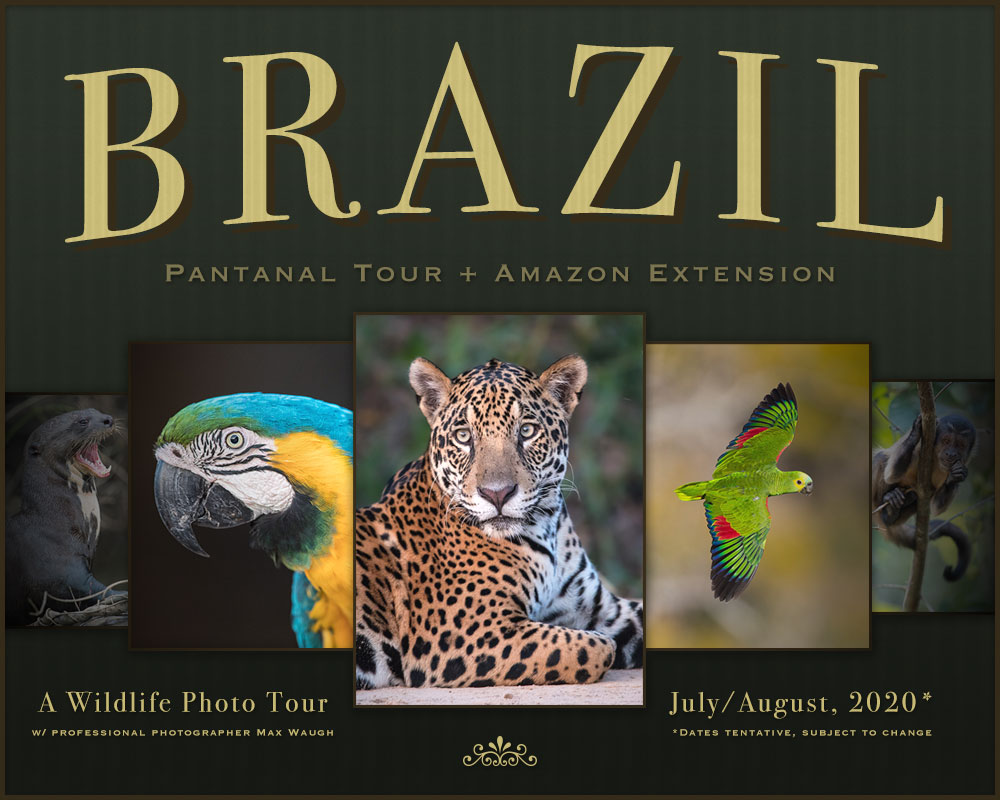