I’m leading an extended tour this week in Yellowstone and the Grand Tetons. I purposely limited this trip to a smaller group, and looks like it’s going to be a fun week.

We began at a normal time Sunday morning, heading for the northeast as the sky slowly brightened. Elk grazed in the darkness at Mammoth as we drove through. There weren’t many reasons to stop as we made it all the way to Petrified Tree, so I finally pulled over for a lonely bison bull in order to let my clients stretch their shutter fingers a bit. Things picked up after that.

One of our other early stops was for a landscape opportunity, as we honed in on the changing aspens. Some already sported orange leaves. 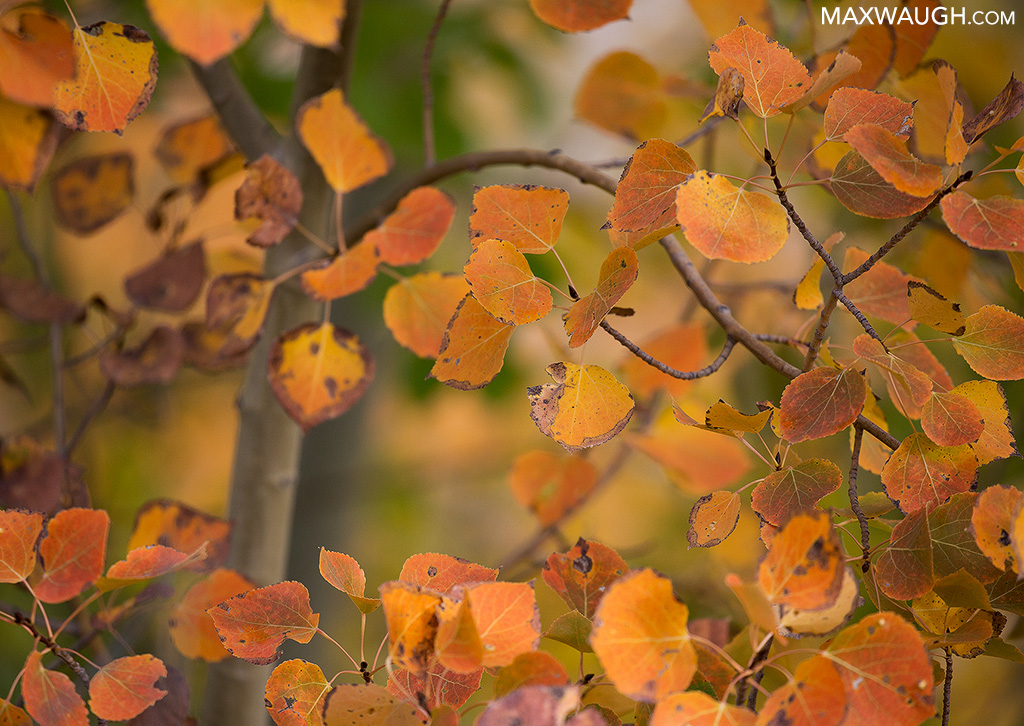 And yes, we caused a leaf jam.

No bears the entire day, but we found a lot more bison (mostly distant, but posing occasionally in front of the green-and-gold cottonwoods), some pronghorns, and lots of Red-tailed hawks. The autumn migration is in full swing (for bluebirds too), and I don’t think I’ve ever seen so many hawks in a given day in the park. Most flew off before we could get shots, but occasionally we found a cooperative bird.

We spent enough time in the morning pausing for landscapes, bison and other critters that I wasn’t sure if there was a point to turning back and canvasing the Lamar and other nearby areas again before heading out the northeast gate for lunch. Regardless, I planned to at least make it to Pebble Creek before deciding what was next. And that’s when the wolves appeared.

Two wolves bounded through the meadow right toward the road in front of us. In this day and age of scarce close wolf sightings, this was a special treat. I dropped my clients’ car windows as I slowed to let the wolves cross. A black wolf led the way, followed by a graying black. I assumed the latter was 926F, now without a collar. Hopefully my clients got a few keepers. I could only shoot through the windshield, followed by a few butt shots. It was a fun, unexpected moment.

It was late enough that I decided we’d lunch in Silver Gate before heading up to the Beartooth. I didn’t intend to drive up that way on our first day, but based on our plans the rest of the week, this was our only shot. We stopped and lunched outside at one of my cabins before hitting the road.

The Beartooth was quiet. It was very windy (not surprising), to the point that no pikas or marmots were visible. We even struck out on mountain goats… until we were driving back. Two goats appeared in time for one of my clients to spot them. They were pretty ratty. I was surprised to see they still hadn’t shed all of last winter’s coat. The lead goat also sported a radio collar and ear tags. Maybe it had a nose ring. The goats crossed the road, and marched uphill out of sight. 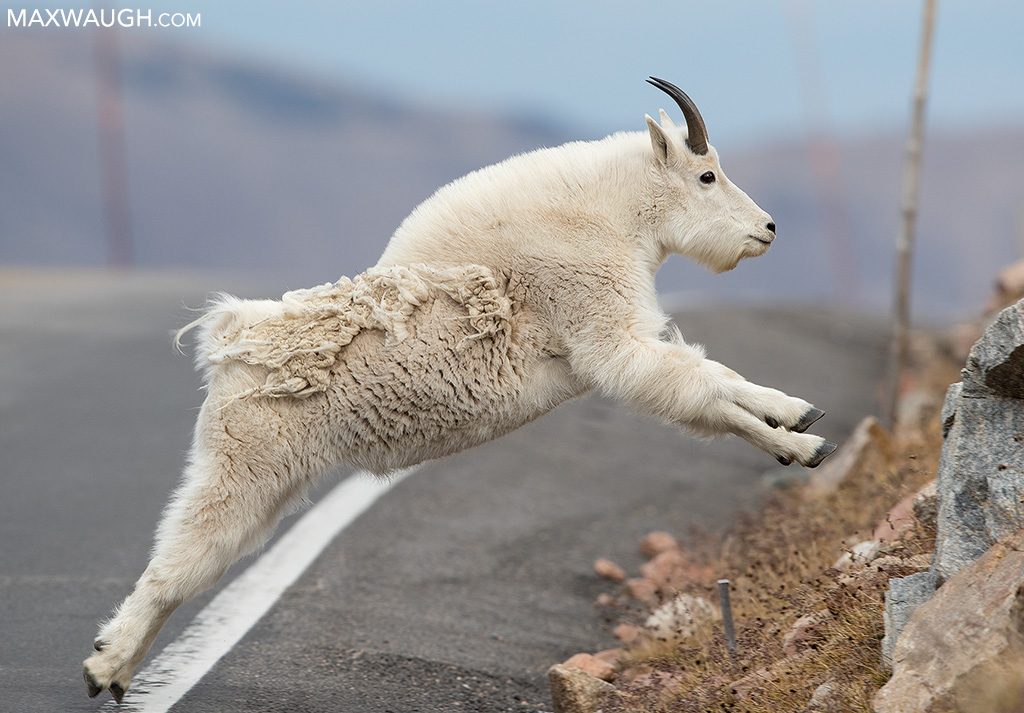 That powered me through the rest of the day. We stopped for more landscapes and distant bison in the Lamar. Though the peak of the rut has passed, many of the large bulls are snorting, rolling and kicking up dust. 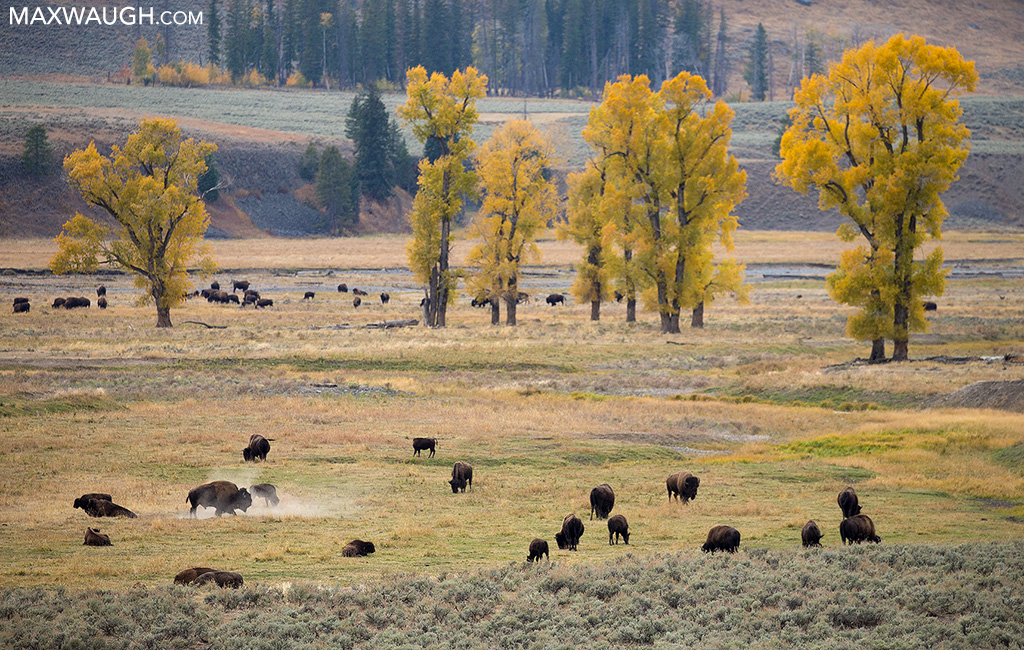 We had some late afternoon sunlight, so we stopped for a few more landscapes (with no other wildlife showing itself). We even explored the boardwalk at Calcite Springs Overlook. Near the end of the path, autumn colors were framed by a backdrop of the canyon and the Yellowstone River. 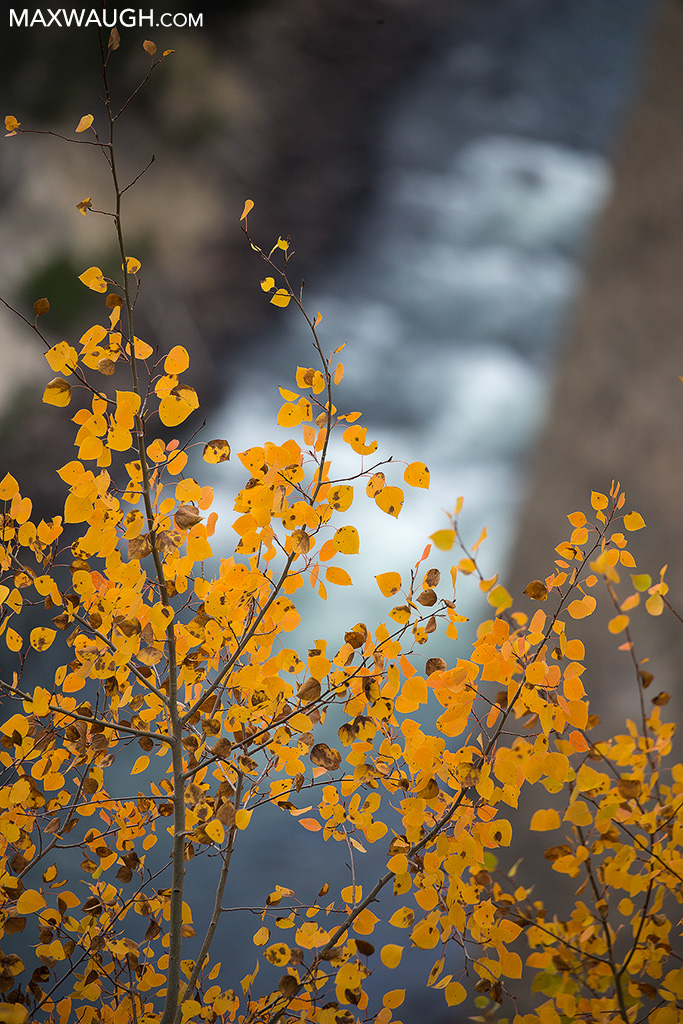 Leaves in the morning. Leaves in the afternoon. Somehow, I don’t think these will be the last ones we photograph on this trip.

We left earlier this morning in order to reach Hayden Valley and the Lake. Even with an “early” start we were a bit late getting down, but it didn’t make a difference in terms of the light. The sky was mostly gray. A quick stop on the south side of Dunraven Pass yielded fleeting glimpses of orange fire burning through. 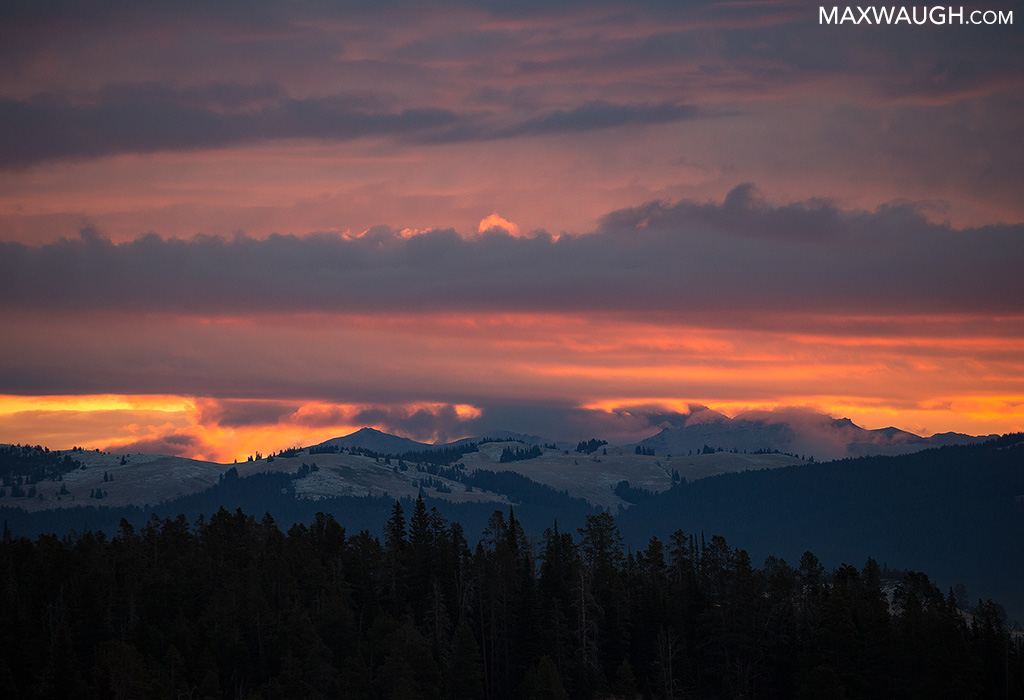 Hayden Valley, however, was still blanketed in fog and low clouds. We found bull elk on both horizons half-way through the valley, but there was little else to photograph. 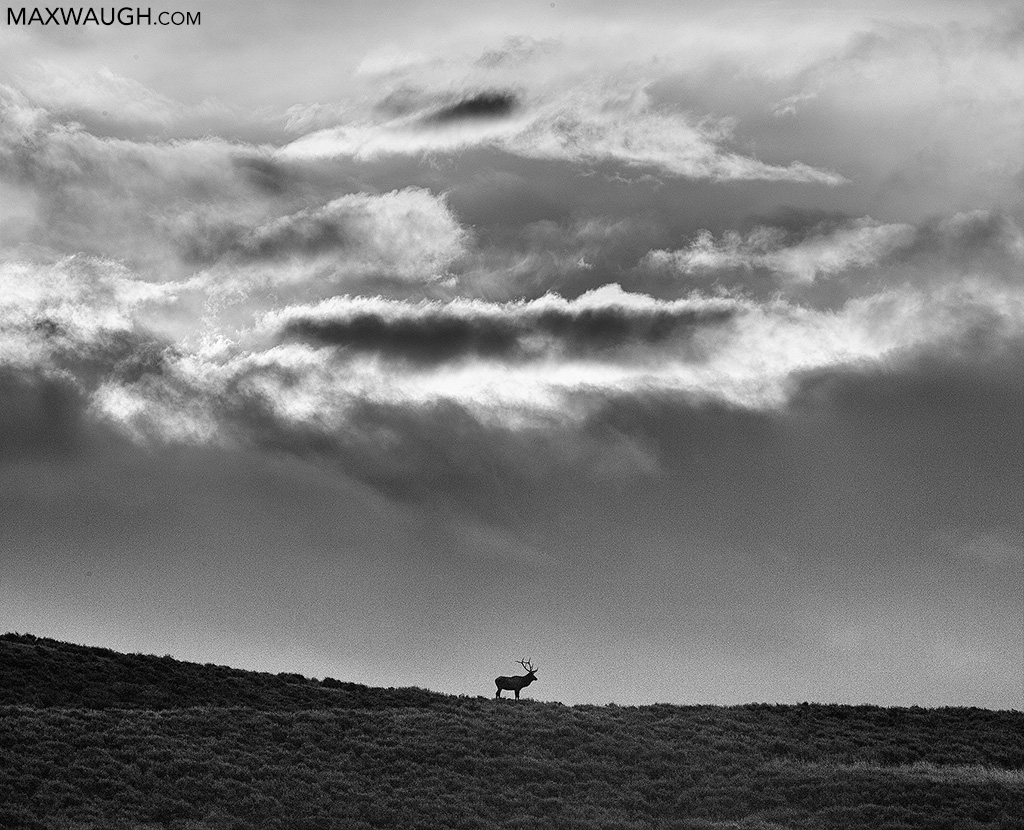 Folks were out with binoculars and lenses at Grizzly Overlook, but they were only seeing distant bison through the mist (all the while hoping they were bears). As we approached Fishing Bridge, a bull elk wandered through an open meadow beneath the road.

My initial goal for the morning was bears, and we made it down to the east entrance road in hopes of finding the grizzlies that had been seen in the past week. Other than a Bald eagle, we struck out. 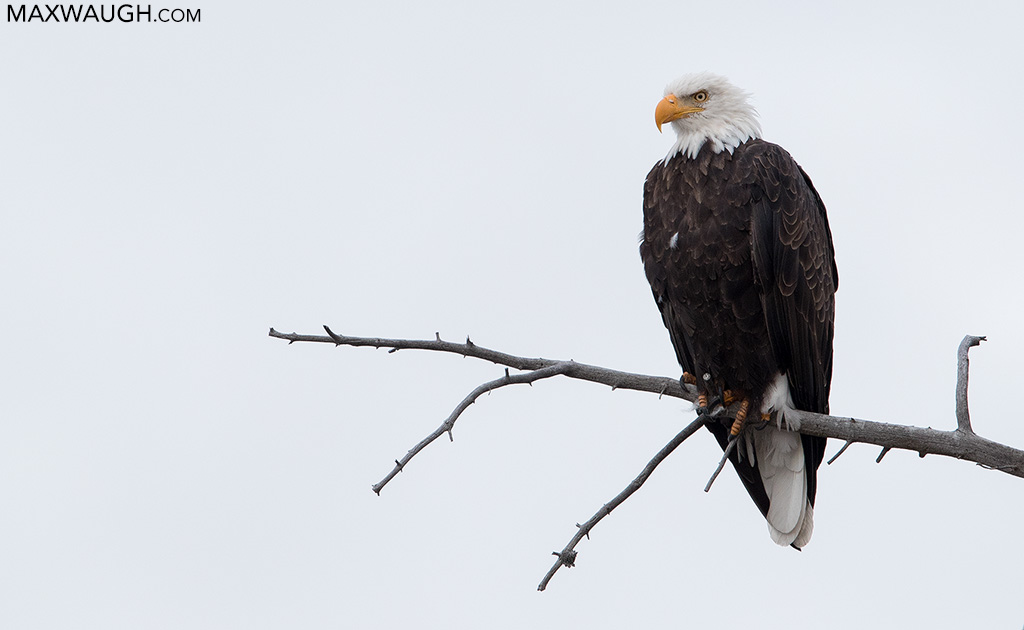 Okay, no bears… so why not try for owls? I’d received a report of some Great grays in the last couple days, so we went out for a short hike. Alas, all we saw were distant flickers, a(nother) Red-tailed hawk and a couple squirrels.

After lunch at Bridge Bay and a couple more fruitless searches, we turned north. The majority of my clients have never visited Yellowstone, so I brought them to Artist Point, where we enjoyed a mix of snow and sunshine while soaking in the magnificent canyon views. Afterward we tried another owl search at the Canyon meadows, but suffered a familiar result.

On Dunraven Pass we finally found a different animal… our first coyote of the trip. It hunted beneath the road for a short time before wandering away. From there, another bear search on the north side didn’t work out, and we turned toward the Lamar. Unfortunately, bison are the only animals consistently cooperating at the moment (though not necessarily at close range), so we returned to shooting landscapes for the remainder of the afternoon. The sun would occasionally poke through the clouds and lend a nice glow to the autumn colors below.

The drive home was interrupted by a couple of very large mule deer bucks. When I first spotted them they were near the road, but by the time we parked, grabbed our gear and walked back down they had high-tailed it up to a distant hillside. We began the morning with elk silhouettes, so I guess we could end it with deer silhouettes.

Leave a reply to Jake Click here to cancel the reply