Tuesday was a transition day. We packed up and stuffed the SUV for our move to the Tetons. On the way, of course, more Yellowstone!

Who’d have thought that the “geyser day” on this tour would end up being by far the most active and fun day (so far). Since we were heading south, our plan was to work the west side of the park, visiting a number of areas my clients had yet to experience, including the first geysers for many of them. Before we got to the thermals, we lingered up north, driving up above Mammoth to get to Swan Lake Flat for sunrise.

A couple of frosty bison greeted us, as did the setting moon, which slid behind a wispy cloud and a mountainside soon after we arrived. The lingering cloud cover on the horizon appeared to be thinning a bit, so I was hopeful that we’d get a good sunrise. First, we drove down to Sheepeater Cliff for a quick wildlife check before returning to the flats.

The mountaintops began to glow as I veered into a pullout. To the east, I spied some distant elk and one very large bull. While my clients concentrated on sunlit peaks, I kept an eye on the action behind us. The bull crested a small hill before disappearing into the trees. Just then, the sun broke free and lit up the entire frosty flats in a warm glow. I knew there was potential for a pretty good wildlife shoot, but we’d have to go find those elk first.

I gathered up the troops, along with our long lenses, and we trekked into the sage. After a couple hundred yards, we finally got to a high enough vantage point to see the far flats. A large bull billowed steam as he bugled. A few cows stood nearby, backlit in dramatic light. Much closer to us, more bugling erupted from the nearby trees, where the first bull I spotted had vanished. It turned out he had a large harem sequestered there. Soon, they were on the move.

It was tough to choose which way to shoot, as the larger gathering of elk was front or side lit, while the more distant elk to the east were backlit. So many choices, and no bad options. Eventually the closer bull and his cows trotted eastward toward the others. It looked like we’d be forced to photograph silhouettes, and lots of glowing clouds of steamy breath. What a pity.

Cows pranced back and forth. Bulls (now there were more emerging from the trees!) bellowed and chased. Heck, even their pee was glowing when they urinated on themselves… one of the rituals of the autumn rut. It was all quite magnificent to watch. Eventually, we counted at least eight bull elk in the far meadows, many of them quite large.

One of our bulls chased his harem onto a short hillside, which gave us a view of their shadows, projected in the morning sun onto the sage below. This was frickin’ awesome. 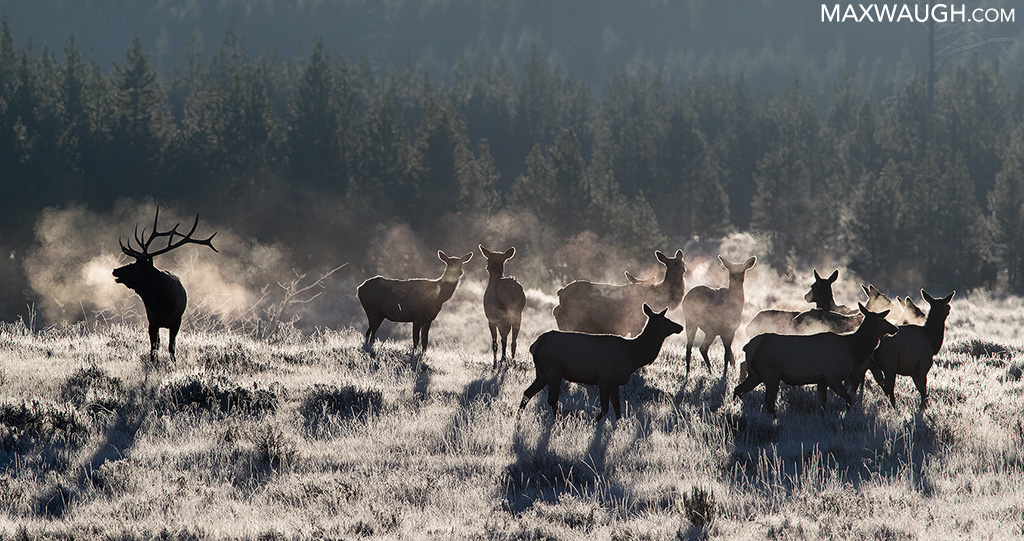 Hands-down the best elk shoot I’ve ever had. I felt like we finally had a real wildlife moment that paid off with great photos for everyone.

It was tough to move on, but we returned to our vehicle and descended toward Mammoth. From here on out the day was filled with landscape photo sessions. We stopped at the Hoodoos, Upper Terrace Drive and Mammoth Hot Springs before turning south for real. On the way down, stops at Roaring Mountain, Fountain Paint Pots and Firehole Lake Drive preceded a picnic lunch. 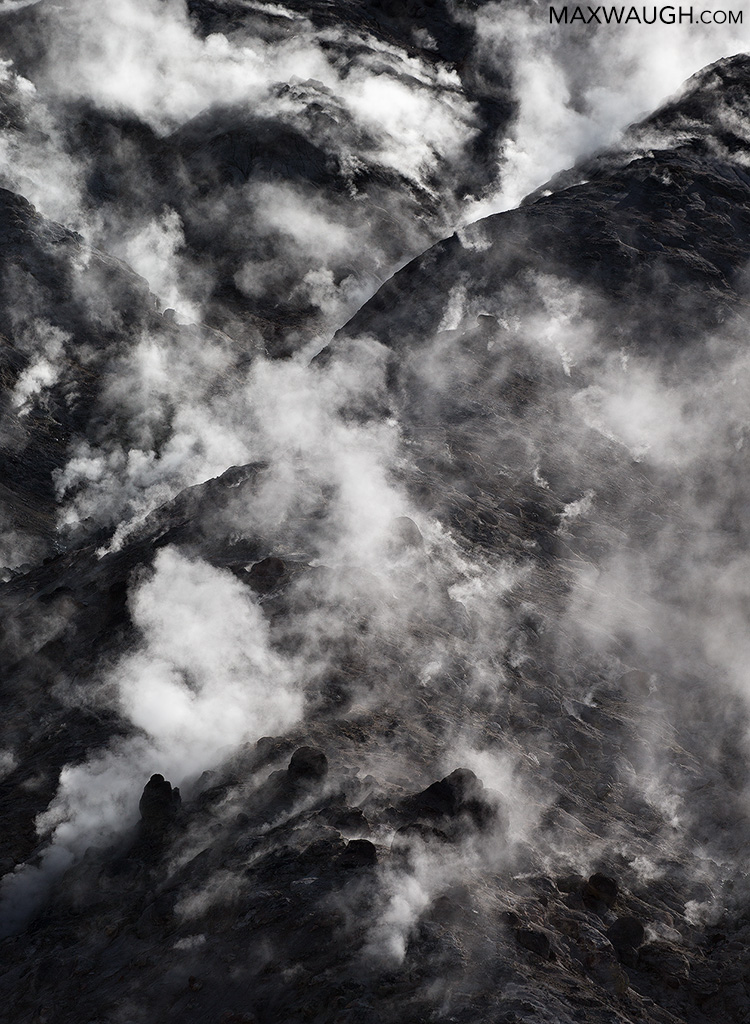 Then we moved on to one of the highlights of the day, the hike up to the Grand Prismatic Spring overlook. This was my first time on the new trail (I’ve only clambered up that hill the hard way before), and it was quick and painless. Good views of the spring, which was a bit steamier than I’d like on a relatively cool day. But we had chances to shoot wide and focus in on finer details from our vantage point.

It was such a busy day, we were fairly late getting to the obligatory Old Faithful stop. Luckily, it was due to erupt soon after we arrived, so we didn’t have to stay too long. There was still a lengthy drive to Jackson ahead of us.

The drive through the most boring stretch in the park and out the south entrance was fairly easy. I managed to stay awake as we entered the Tetons, stopping briefly to check on the colors at Oxbow (good, though not quite peaking). Then at last we arrived in Jackson. Several sunrise shoots to come!

We chose Oxbow Bend as our first sunrise location during the Teton visit. Even though we arrived plenty early, the parking lots were packed and photographers were scattered along the river. We settled in on a cold morning and waited for the light.

The skies were clear. Perhaps too clear, as the absence of clouds above the mountains makes for a less interesting textureless sky. Instead, we got the moon, which was a first for me at Oxbow and a nice change of pace. 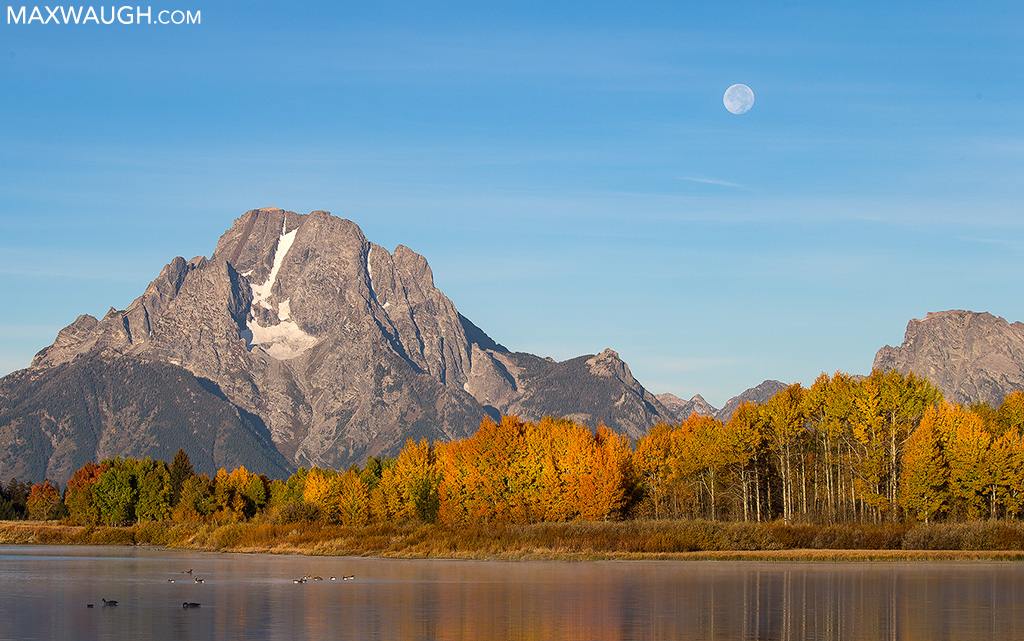 By the time the shoot was over, it felt late for wildlife. We checked Cattleman’s Road (just missed some coyotes swimming across the water) and hung out for a half hour before moving on. We traveled south through the park, spotting a lone bull elk entering the trees and investigating Lupine Meadows without much luck.

We decided to play the Moose-Wilson Road lottery. You gamble on the chance to a) see wildlife, b) park and c) be allowed to exit your vehicle. You never know how many of those privileges you’ll get… and neither do the authorities for the most part. There was a No Parking zone set up for a good stretch on both sides of a bull moose, so I had to drive down a fair ways to find a viable spot off the road and out of the zone. When I returned, a ranger told everyone who was watching the moose that they were fine as long as they parked out of the zone and stood off the road. Five minutes later, a volunteer yellow vest appeared and ordered everyone out of there. When told that the previous ranger had allowed us to stay she said, “everyone interprets the rules differently.” Which is oh, so true down here, but still a bit silly.

Given that wildlife activity was somewhat limited, we returned to Jackson for a midday break. Though I normally have longer days in spring, we’ve been going non-stop with twelve hours days in the vehicle so far, so my nap felt great!

The afternoon was even quieter than the morning. I’ve spoken to several photographers down here who are asking about Yellowstone, because the Tetons have been relatively slow. Coincidentally, many Yellowstone photographers have been looking south for the same reason. It’s just one of those weeks in the GYE.

We explored the road to Two Ocean Lake, stopping to photograph colorful aspens. Next, we drove part-way up Signal Mountain, where I’d occasionally had some luck with mulie bucks and grouse in the past. Just a cow elk this time. Aside from a few pronghorn and a small herd of deer, the drive south was quiet. As we approached the turnoff for Moose-Wilson, I spied a large mule deer buck just off the road. He crossed before we had a chance to get photos, but I figured we might get a view of him if we drove down ahead. And it worked out perfectly, as he popped out just as we set up in our new parking spot. 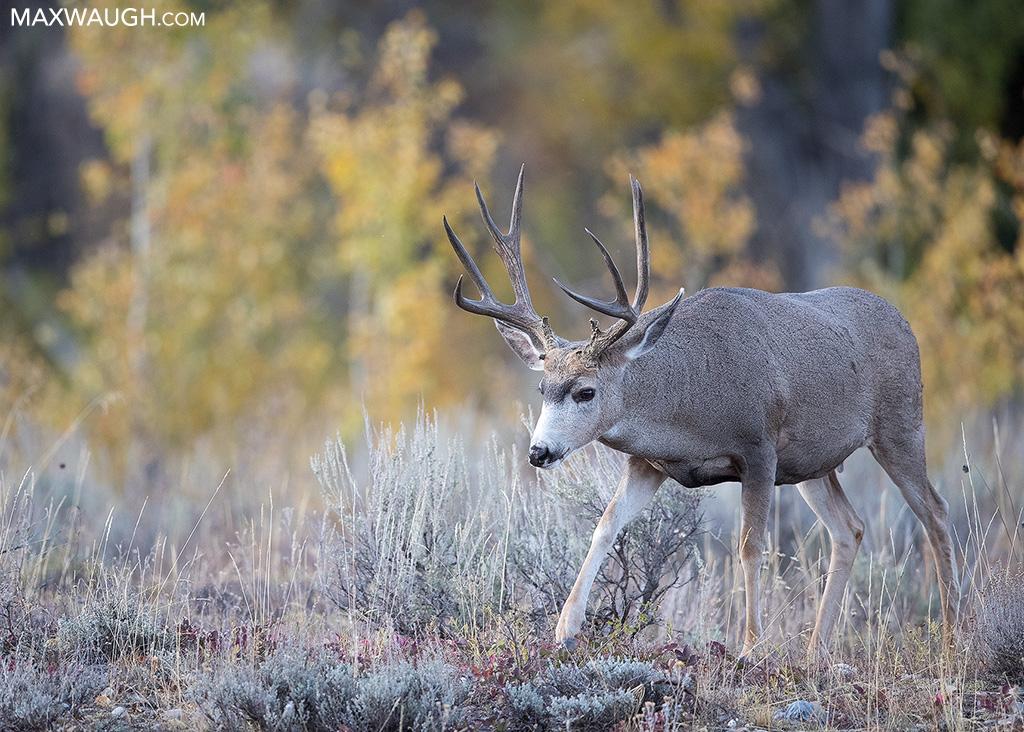 He would have crossed the road again, if not for one woman who stood directly in his path and refused to move out of the way when asked by the rest of the small group of onlookers.

Due to the dearth of wildlife sightings so far, we’ll spend tomorrow morning searching for critters, forgoing another sunrise shoot. Hopefully it’ll pay off!