Thursday we were supposed to take a break from the classic sunrise shoots in the Tetons and focus on wildlife, yet we still found ourselves down at Schwabacher Landing first thing in the morning. Mainly because I had received a report of beaver and otter activity near there during the previous morning. Having photographed beavers near the landing before, I thought we had a good shot.

We probably got some strange looks passing the throng of little lenses with our “big guns” in tow, but we soon moved beyond the crowd as we tracked the waterway north around the bend. Unfortunately, there didn’t appear to be any rodent or mustelid action. Just ducks. I even went so far as to scout ahead through the trees, getting all the way to the river before turning back. No signs of mammalian life.

I’m pretty sure my clients were beginning to question me at this point… when I spied an otter back closer to our starting point. 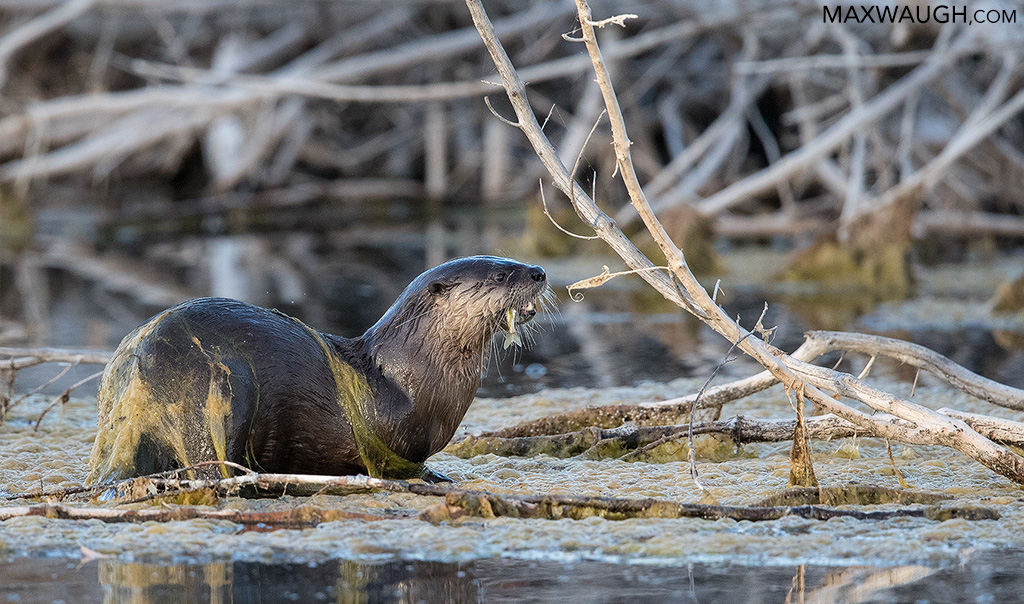 The whole exercise was worth it after all! The river otter, my favorite Yellowstone animal to photograph, often eludes me on tours, and I rarely see them in the Tetons. So we spent a fair bit of time with this one as it fished (with a high success rate). While there, a kingfisher (another elusive animal in the GYE) perched above the pond.

The otter was quite active, but only came fully out on shore to do the Poop Dance before dashing back into the water. We actually left before it was done swimming around, but we wanted to ensure we had a chance to find some other critters on this particular morning.

It was a good call, as our next stop off the highway yielded a distant sighting of a moose and calf down in the willows along the tree line. 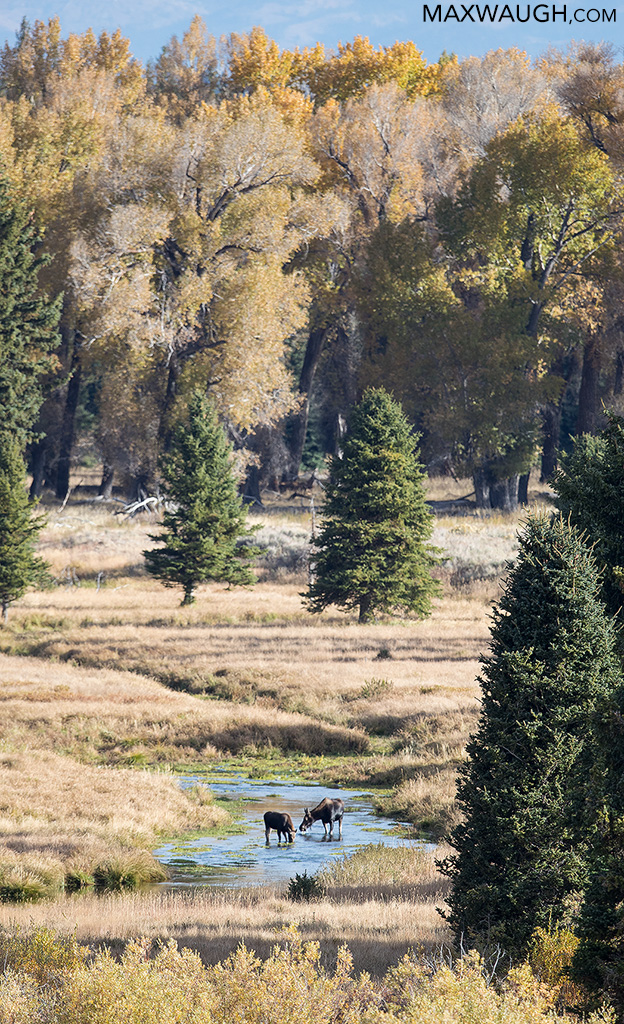 We snapped some long range shots before descending to the flats and getting a closer view. While there, I caught sight of a third moose back in the trees.

So it was already a good morning. Why not try our luck with the Moose-Wilson Road Lottery? Wednesday’s session didn’t go so well, but today we had some new Yellow Vests directing traffic, and they were quite accommodating. When I saw them in the road, I thought our bull moose was back… instead, it was bears in the trees!

Yes, we finally had a bear sighting on this trip. It was also my first time seeing them climbing for the berries during fall (I’m usually down here too late or the road is closed). Due to the busy traffic, I was able to leave my clients in a well-behaved group off the road as I drove back and forth. So I couldn’t get many of my own photos, but it was still nice to see the bears (at least three cinnamon black bears) climbing about. Our bull moose was back further down the road as well.

Eventually, I picked up the crew and we headed further down the road, where we caught sight of another cinnamon bear walking up the Death Canyon road. I gave the young bear ample space for its commute until it walked into the brush, at which point we were able to pull forward and find a parking spot. Unfortunately, the vegetation was thick and we never quite got open views until it crossed the road again and went up the opposite hillside and into the trees.

Coming back down Moose-Wilson, our bull moose suddenly appeared right next to the road. A bit too close for comfort, so we left the scene and returned to Jackson for lunch and our mid-day break. On the way back, I finally had a chance to snap a quick photo of a bear out the window, my first and only image of the hawthorn berry-eating bears. 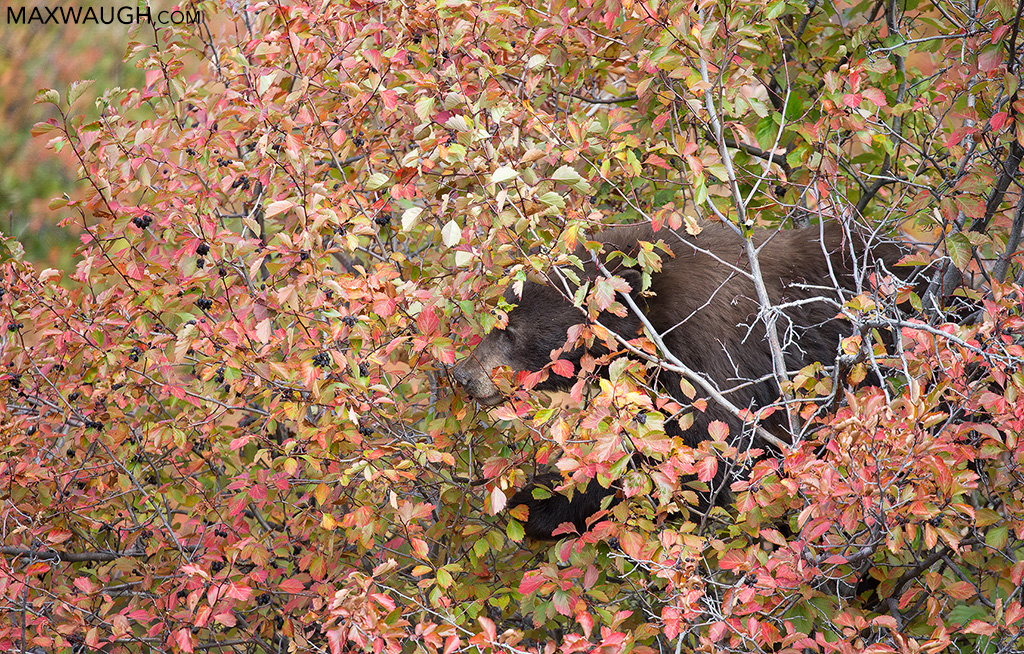 After our best wildlife morning of the trip, we couldn’t keep the momentum going. We checked several areas, including Pilgrim Creek and a drive up Signal Mountain (brief deer and grouse sightings). We ended up back at Moose-Wilson, where the bear family was in the trees again—no stopping this time—and further down the road a larger cinnamon bear was in the bushes right off the road. We joined the gathered crowd in an attempt to get pictures, but it was already quite dark and sight lines were limited. Eventually, the bear crossed the road, scattering tourists and effectively ending the show as it disappeared into the meadow.

From zero to five bears in a day. All is right with the world.

The final day of our tour began at Mormon Row. I promised my clients another sunrise shoot, and they chose the photogenic barns. We arrived in good time, though naturally we were not the first people there, so we quickly scrambled to claim spots along the fence and tree line. At this spot you have to choose a spot and commit to it.

Everyone had committed to their own places before the late arrivals showed up… and started walking through the field in front of everyone’s cameras. Let me tell you, one doesn’t need access to C-SPAN this week to hear aging white males yelling a lot and pointing fingers.

Every wait for sunrise in the Tetons involves keeping one’s eyes on the sky. It was clear (too clear, again, really), but not perfectly clear. There were one or two lingering clouds tethered to the peak of Grand Teton. They simply would not float away, marring an otherwise clean sky. Lots of clouds or no clouds… not one or two nuggets, please.

In case you’re wondering if full sunrise on the barn is better for photography than just having the sun hit the mountains… the answer is no. Why?

Afterward, we commenced with our wildlife exploration, but it went like much of the rest of this trip (and was a sign of things to come the rest of the day). The bears were hiding in the bushes along Moose-Wilson, but never emerged, and we never found much else. We would have left for Yellowstone then, but were forced to return to Jackson to retrieve a tooth.

Our detour took an hour-and-a-half due to road construction, but eventually we were driving toward Yellowstone. We crossed over and quickly found a picnic spot at Lewis Lake. Then we were back on the road, determined to find some critters during our last afternoon.

Yellowstone hadn’t changed much since we left! No grizzlies near the lake, no great gray owls in any of the four spots I checked, and very little to show for our efforts all the way to the Lamar.

At least we were able to snap a few pics of distant bison in Hayden Valley. 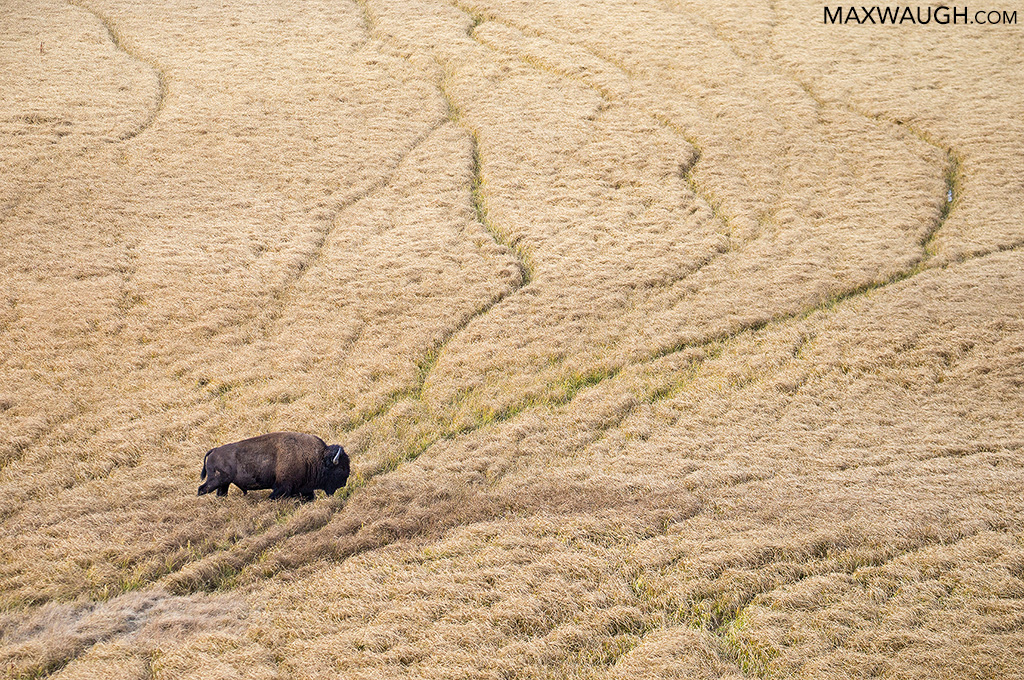 Finally, on our late drive home we joined a throng hoping for a black bear to come out near Hellroaring. It stayed in the woods, and our brief views showed an ugly radio collar and even uglier green ear tags.

A coyote (finally, another coyote!) left the road as we drove past Blacktail Drive. And to close things out, we rolled down the windows to listen to the many bugling bull elk hanging out near the road at Mammoth as darkness descended.

This is how things go in fall sometimes. One week is action-packed, the next is sporadic at best when it comes to wildlife. Good thing there’s some pretty scenery to balance things out.

I had a fun week with this group. I’d like to thank Alena, Chris, Richard and Zdenek for a great trip! And thanks to you all for following my reports, as always.

Want to join me on a future Yellowstone tour? Visit the Workshops & Tours page to see my upcoming schedule.