When I look back on 2018, I see an active year filled with fun adventures. I worked hard to balance family time with my work travels, but we did manage to fit in a family trip (to Ireland) as well. So I took plenty of pictures! What I found was that the quality of this year’s crop of images didn’t quite stack up to that of recent years, but I still unearthed a few memorable photos and moments sprinkled throughout.

As with my “Best of the Year” selections, these runners-up aren’t always the most aesthetically-pleasing photos. Some are simply fun moments that I’m fond of for one reason or another. Enjoy the Not Quite Best of the Year, and be sure to check back in a few days for both the Best of 2018 from my peers, and my own favorite images of the year. 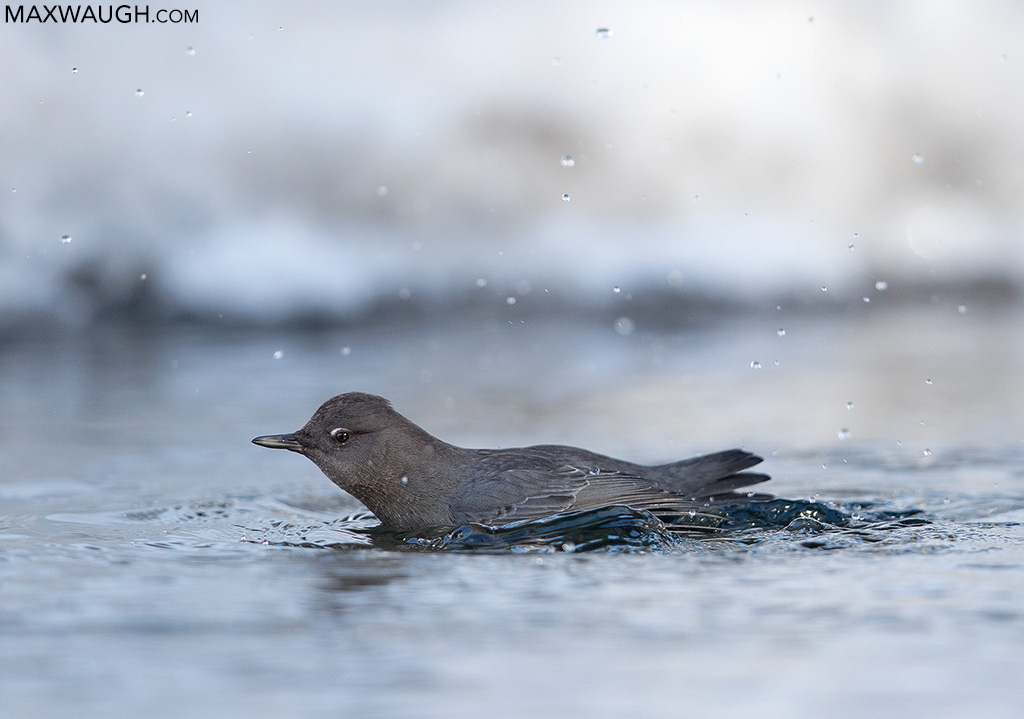 You’ll often find that I’m fond of more personal moments when I compile these year-end lists. Perhaps the subject isn’t the most dynamic, or maybe the background isn’t quite clean… but shots like this are usually memorable because they represent a new experience or a type of shot I haven’t achieved before. In this case, I’d seen plenty of dippers in Yellowstone, but I’ve never been able to capture such an intimate picture of their interesting behavior. The American dipper spends a lot of its time underwater… under cold water, as it searches for aquatic bugs during Yellowstone’s winters. It’s a hearty little bird, and it’s not always easy to get close enough—much less at eye level—to photograph one in the water. So I was pleased that this one accommodated me as I lay on my belly in the snow and it shook off a little excess moisture before disappearing back under the surface.

February 7: Bison in a Snowstorm 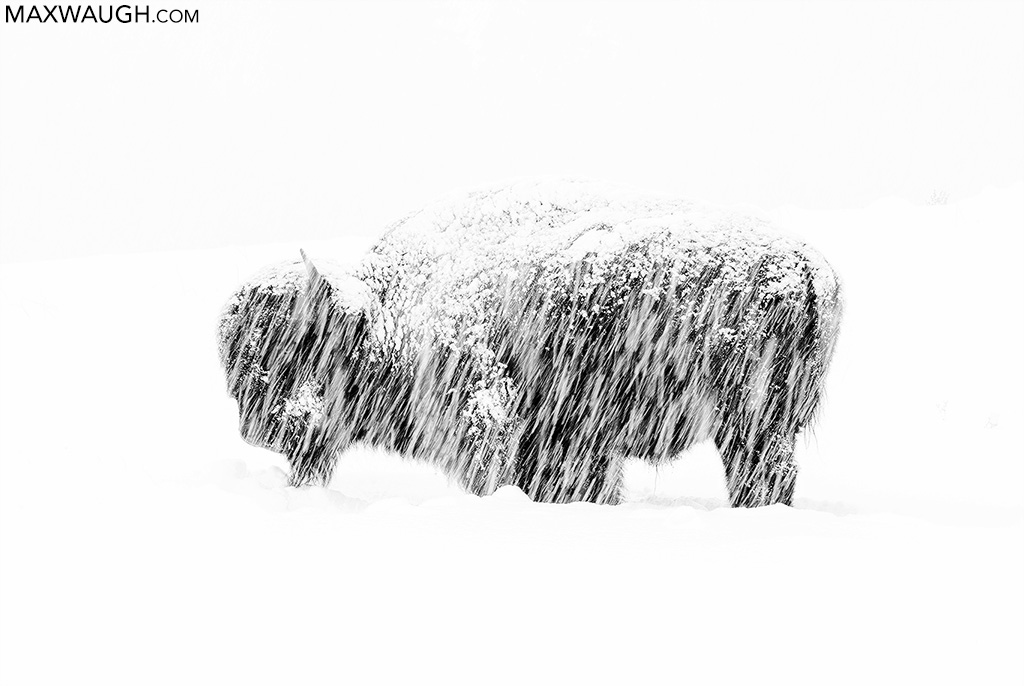 During the second of my Yellowstone winter tours, we were driving through a thick snowfall when we came across a bison foraging near the road. The snow was so thick that it was difficult to focus on the details of the bison, which gave me a good excuse to experiment. The recognizable silhouette of this creature is somewhat iconic… what if I tried to add some extra texture by “painting” lines of snow across its body? No, I wasn’t thinking about post-processing or digital illustration. Rather it was a matter of shutter speed. Using a slow shutter meant the falling snowflakes might drag out into longer lines. It’s something I’ve tried in heavy rain and hail before… never in thick snow. The result (from a 1/15th exposure) was pretty interesting.

Join me on my 2020 Yellowstone winter tour. 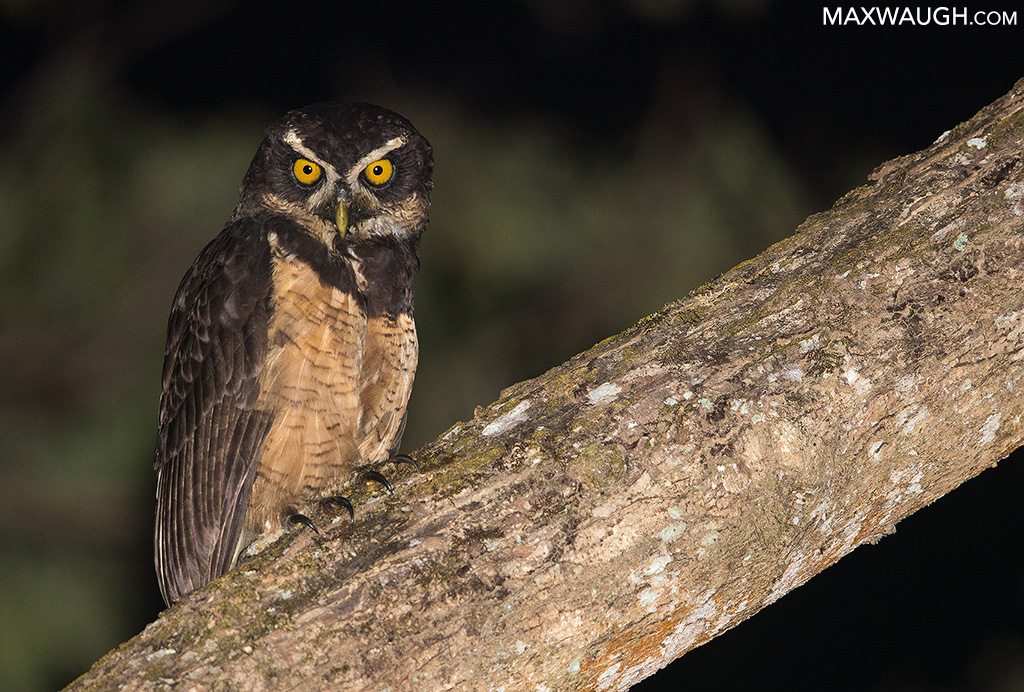 During my Costa Rica tours, we make a stop on the Caribbean side of the country where we sometimes manage to find Spectacled owls. This is one of the largest and more handsome owls found in Latin America, so it’s a nice treat to see them in what has traditionally been a pretty reliable spot. Unfortunately on this particular trip, we struck out. The owls were nowhere to be found, so we had to move on and continue on our trek over to the Pacific side of the country. That night, we explored the road near our lodge in hopes of finding a different species of owl, the Black-and-white owl. And we struck out again… until I spotted a shape flying over into a nearby tree in the darkness. I knew it was an owl, and figured it was the Black-and-white… but no! It was… a Spectacled owl—the same species we’d missed that same morning—soon joined by its mate! In all, we saw five different species of owls on this tour. 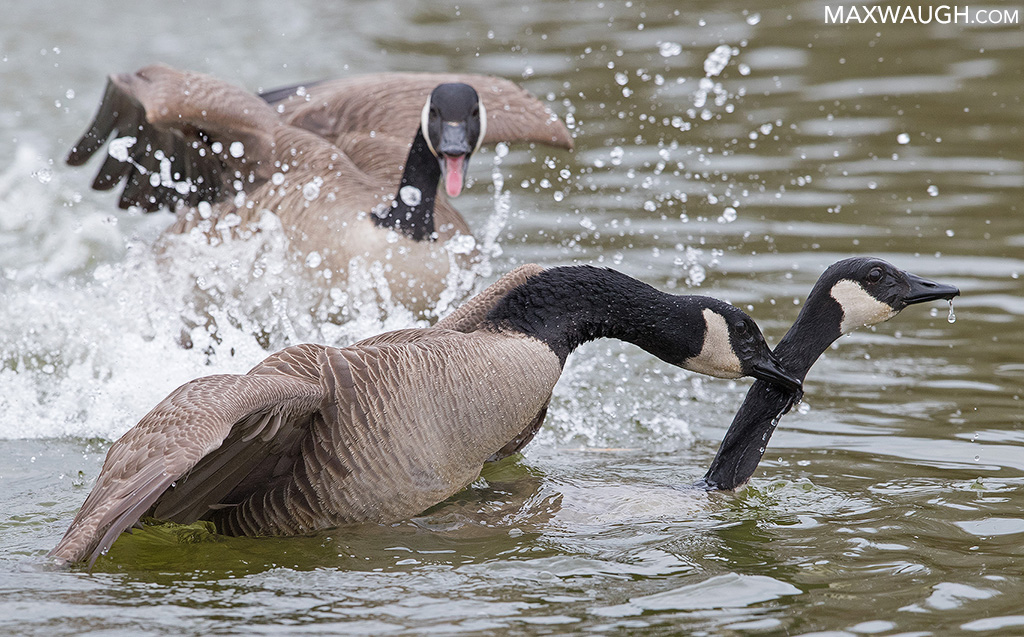 During a day tour I led in British Columbia, I was surprised with a new experience. Sure, like most residents of North America and Europe I’ve seen enough Canada geese to last a lifetime, but I’d never seen their courtship ritual. We witnessed geese pairing off and taking turns dunking their heads underwater to show each other they were ready to mate. This went on for a few minutes until they finally closed the deal. Of course, at that point jealousy set in and a rival male barged in to break things up. It was a prolonged, wet and noisy affair… and a lot of fun to witness for the first time.

See more of my images from various outings in the Pacific Northwest this year. 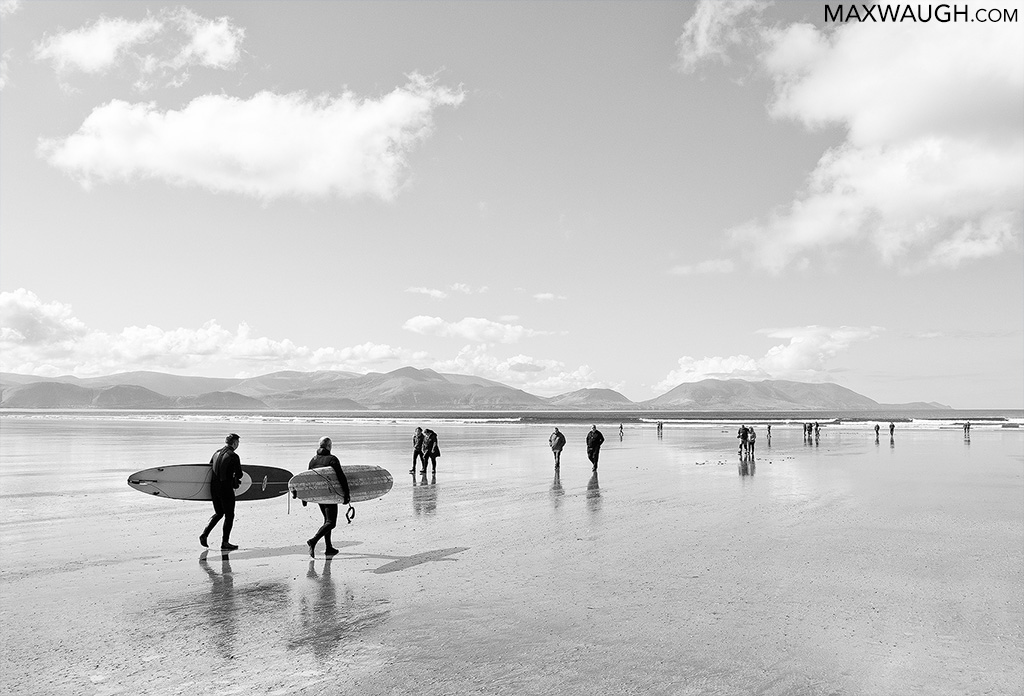 While driving along the west coast of Ireland, we passed Inch Strand. The guidebooks will tell you that this stretch of beach was made famous as a filming location for the 1970 film Ryan’s Daughter. I haven’t seen it, so that meant little. But there was no mistaking a gorgeous swath of sand while the tide was out. It was obviously a popular stop for tourists heading to and from the Dingle Peninsula, but I grabbed the camera and took a walk out while my family napped in the car. The sheen of endless wet sand made for a nice reflection, and I photographed people coming and going, including surfers (yes, there is surfing in Ireland), and eventually some riders on horseback. 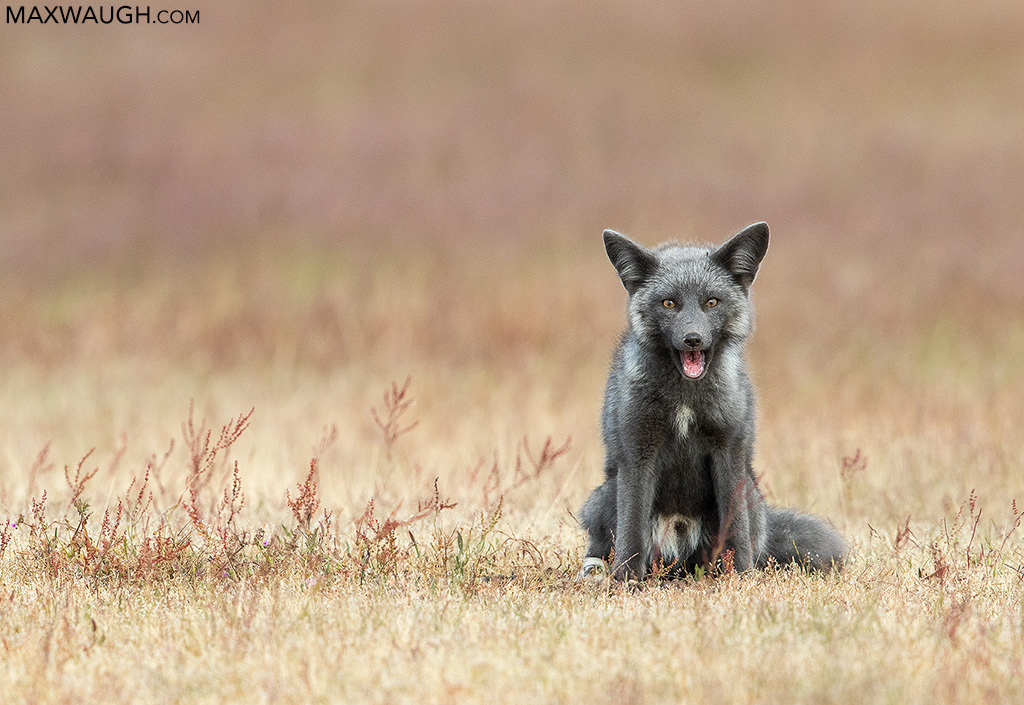 In June I made my first trip to San Juan Island to photograph the local population of red foxes. The trip was overdue, and I was hoping some of the kits were still around at the end of the denning season. I was in luck, and on the second day had a prolonged photo session with a number of the foxes. The big draw (for me, at least) with these foxes is their beautiful coloration, which ranges from traditional orange to gray to black and even brown. This silver kit offered up a cute pose and smile near its den. 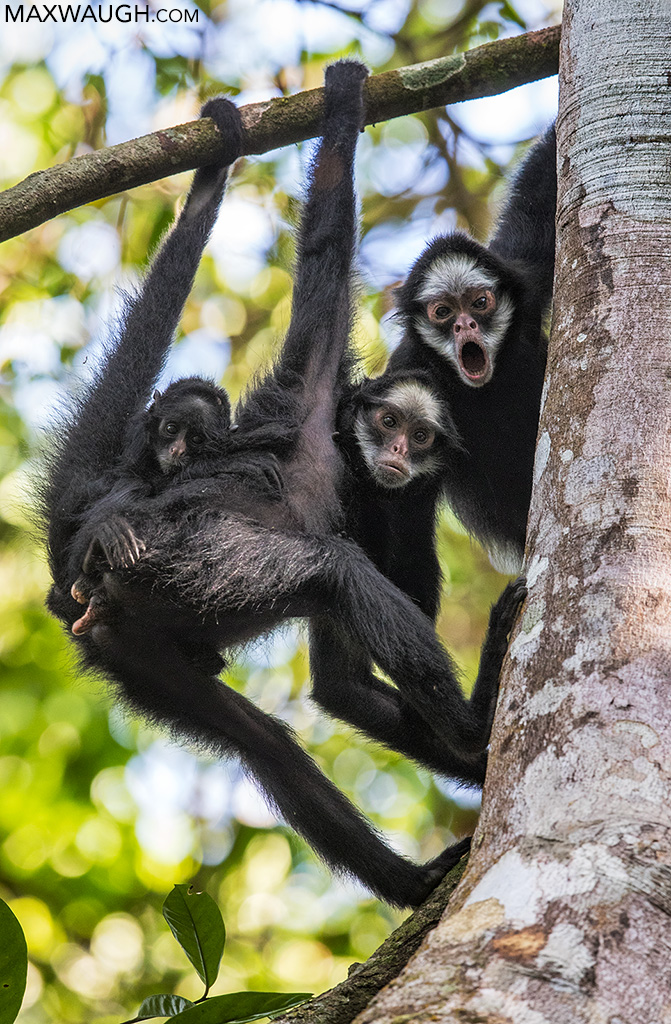 One of the highlights of this year’s Brazil tour was the sheer amount of biodiversity we saw during our two weeks in the Amazon and the Pantanal. We tallied 35 species of mammals, including eleven different monkeys. By comparison, I can only see four monkey species during my Costa Rica trips. In the Amazon, we were fortunate to see two of the endangered endemics, one of which took several attempts. White-cheeked spider monkeys had been seen near our lodge prior to our stay, but each time we ventured out on the trail, they eluded us. Finally during our last attempt we found them. That, of course, is only half of the challenge when it comes to photographing monkeys. They’re constantly on the move, usually in the forest canopy, meaning they’re straight up. So taking pictures is awkward, the subjects are typically backlit, it’s hot and humid… it’s very easy to make a mess of things. It wasn’t until the end of this session that a couple of the monkeys came down lower in one of the trees, and one just happened to be carrying a baby on her back. They lined up for this brief family portrait before continuing on. 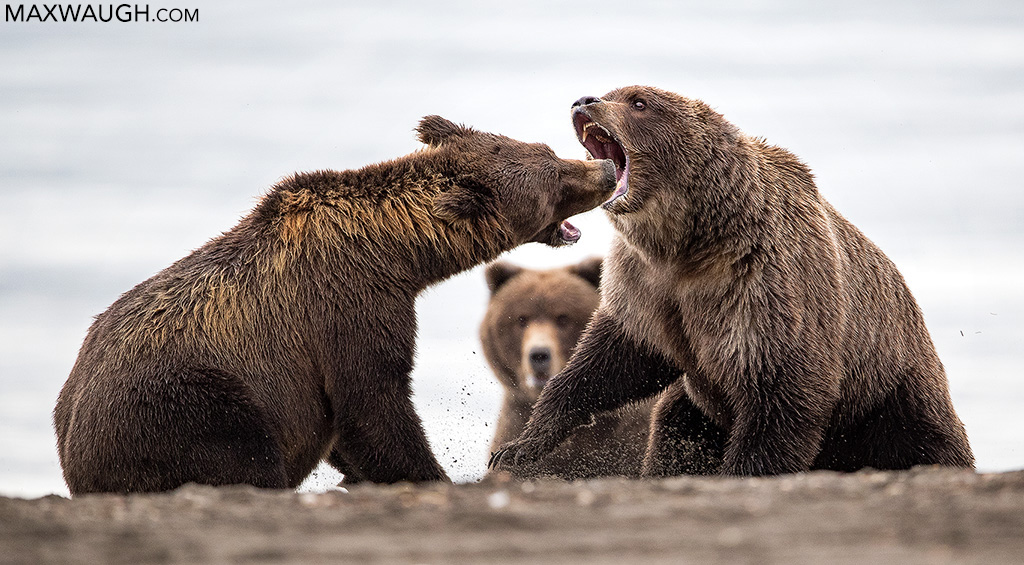 A couple years ago, two grizzly bears produced a highlight by battling in front of my camera for a while. I think those were a couple of subadults who were engaged in a playful wrestling act rather than an all-out brawl. This year in Alaska, I got the real thing for a few moments. A brown bear sow and her yearling cubs were staked out on a food cache on the beach when two other bears approached. They could smell whatever she was guarding, and one of the interlopers was bold enough to challenge her for the meal. The sow rose to the challenge, going after the invader with gusto. They rose up (just downhill from me) and clashed. The sow (left in this photo) held her own and quickly drove off the other bear. What I like about this moment is the third bear—the second of those two strangers—which snuck behind the battle and managed to grab a piece of flesh (fish perhaps?) off the cache before anyone noticed.

Stay tuned for more of my Year in Review content, including my Best of 2018 photos coming next week! 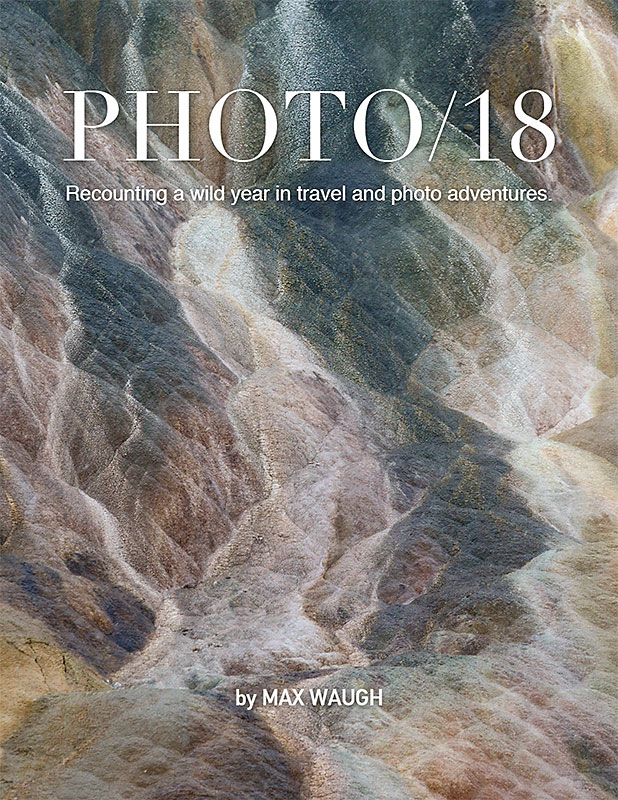 Purchase PHOTO/18, my annual photo yearbook. This year’s issue is 68 pages and contains dozens of images from my various adventures, including my Best of 2018 collection. $17.99 for the print magazine, $4 for a digital copy. Purchase a copy of PHOTO/18 here.

Sharing the Top Work from My Clients in 2018

Sharing the Top Work from My Peers

Best of 2018: My Favorite Images and Moments of the Year