Hitting the Reset Button With an African Safari

After scrambling to escape the impending Snowpocalypse that was about to hit Seattle in early February, I shuffled tiredly off the plane in Amsterdam and went to find the gate for my connecting flight to Tanzania. It was early in the morning. Thankfully, there was enough time to go freshen up, and even change clothes and prepare for the next nine hours in the air.

Afterward I slumped into a seat near the gate, and worked hard to fight off the mental fatigue that was already setting in. And that’s when I first noticed how loud it was. The area around the gate was buzzing with activity and conversation.

It was puzzling. Aren’t people as tired at 8am after coming off a red-eye as I am? I looked around. Small packs of travelers were huddled together at their seats or standing in circles chattering away. Fresh, crisp khaki and pale blue and green safari shirts and pants crinkled as feet shifted and paced restlessly. Guidebook spines creaked and pages fluttered. Then I realized: people were excited.

Undoubtedly several of my fellow travelers were setting out on their first safari, but I bet a lot of them were returning for their second or third African experience. Or maybe their sixth, like me. 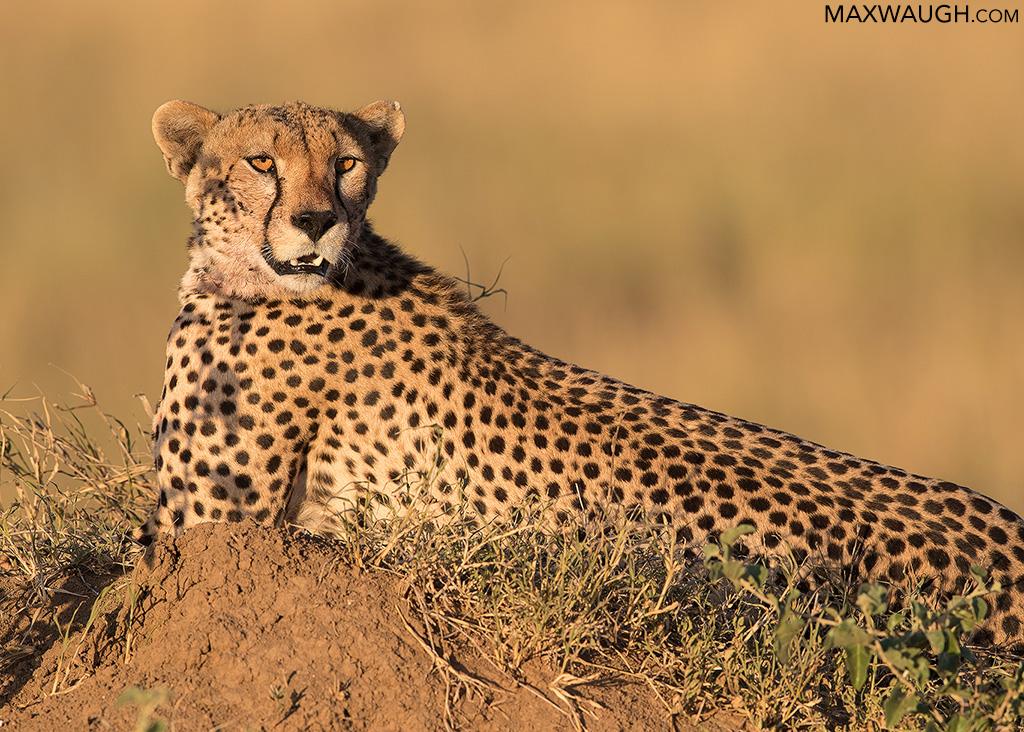 Who wouldn’t be excited about seeing big cats in the wild???

And with that realization I admitted that even I was excited. Indeed, in the weeks prior I had been looking forward to this trip more than many of my past tours. Typically a trip nears and I start worrying about packing, wrapping up all the other work that requires attention, and maybe even fretting a bit about the success of a given trip and whether my clients (even the long-time ones who know and enjoy my tours) will be satisfied with this latest adventure.

But there’s something different about an Africa trip. Maybe because it’s THE classic safari destination. Maybe because one usually gets an opportunity to explore endless savannas or mile after mile of mysterious bush or thicket, and nearly all of it is teeming with wildlife. And big wildlife, to boot. Where else will you go to see many of the world’s largest, tallest and bitiest species hanging out together in one area? 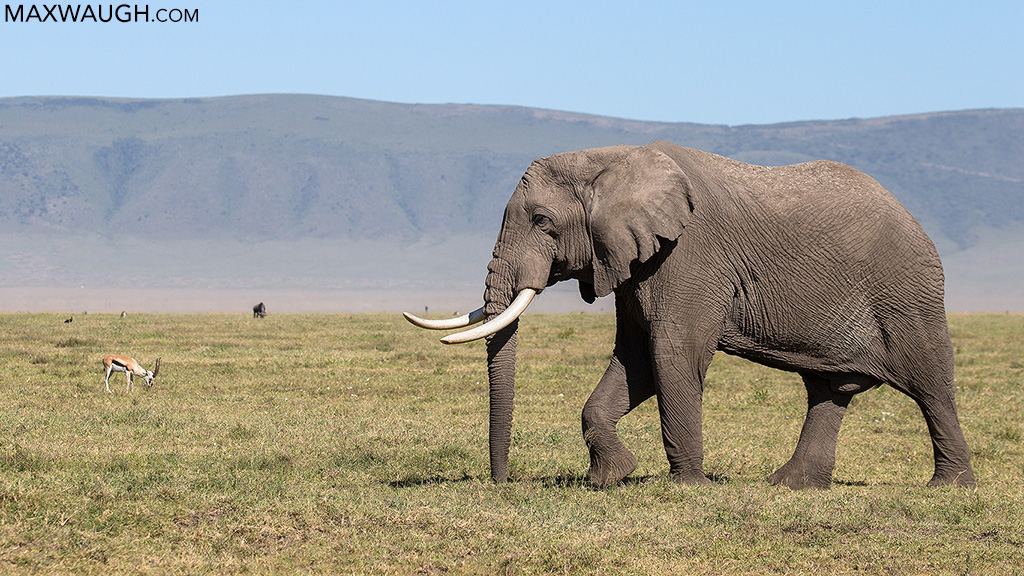 In the Land of Giants, elephants still roam the plains alongside gazelles and wildebeest… and many other species.

If anything, Africa does a better job reminding us of what once was, before mankind encroached on all of the wilderness. Even if it’s a bit of an illusion at times—animals sometimes confined to a fenced-off private reserve with no place to migrate or establish new territory—we can at least still feel what life on the wider, wild plains once was like.

On a more personal level, Africa trips offer a welcome break from my usual fare. In Yellowstone we still get those wide open spaces where most of North America’s grander land mammals call the ecosystem home. But I’m usually behind the wheel all day (sometimes driving up to 15 hours on spring tours). On occasion we might get out and stretch our legs for roadside photo sessions or short walks—it’s hard to even call them hikes—but we’re at elevation, and it may be cold or buggy. Compare that to other trips I lead: Costa Rica and Chile feature a lot of walking, sometimes in challenging conditions in the hot, humid jungle or on the windy Patagonian steppe.

In Africa? Sure it can be hot at times, but we’re being driven around most of the day by our expert guides, in nicely-appointed vehicles. The breeze you feel while standing in one of those open top Land Cruisers is pretty nice, and the view of the surrounding landscape and wildlife ain’t bad either. And then there’s one of my favorite photo tour traditions: Breakfast in the Bush… a full spread of food laid out while the envious hyenas and zebras look on. 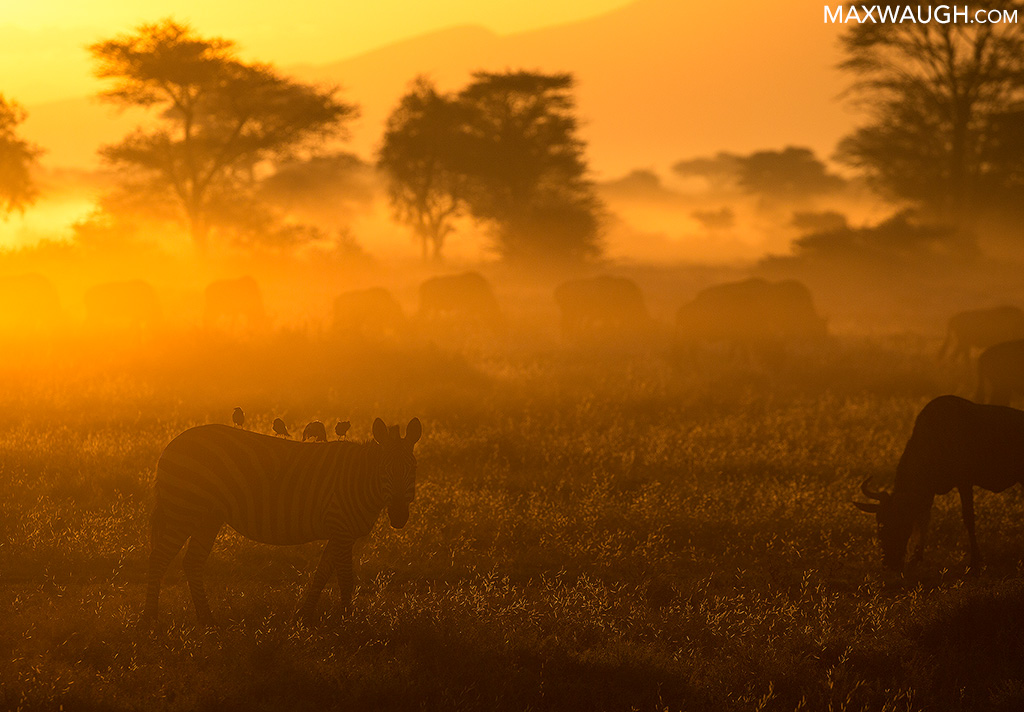 After the animals are done with their breakfast and the golden light has faded, it’s time for us to have breakfast in the bush!

Now I’m making it sound like the African safari experience just appeals to my soft, lazier size. But I can live with that. It’s a change of pace, and the photo opportunities one gets on safari come with more frequency than just about anywhere else on the planet.

So yeah, I kicked off the year by hitting the reset button a bit in Africa after two-and-half years away. But it’s a heck of a way to start 2019.

Photos from my February Tanzania trip will be online soon! If you’re interested in hitting the reset button and joining me on an African safari, I am planning a trip to southern Africa in 2021 or 2022.