Friday was brutally long, but fun. I kicked things off at 4am following about two hours of restless sleep. I had agreed to host a friend of a friend and his wife for a day in the park, so we had to meet at Roosevelt early to start our journey. In spite of some literal and mental staggering about, I did make it on time. Sergio and Gladys were visiting Yellowstone for the first time from South America and were open to just about anything. After laying out the options for them, they chose to go south first in search of the Western Desert grizzly bear family. So we drove over Dunraven Pass. 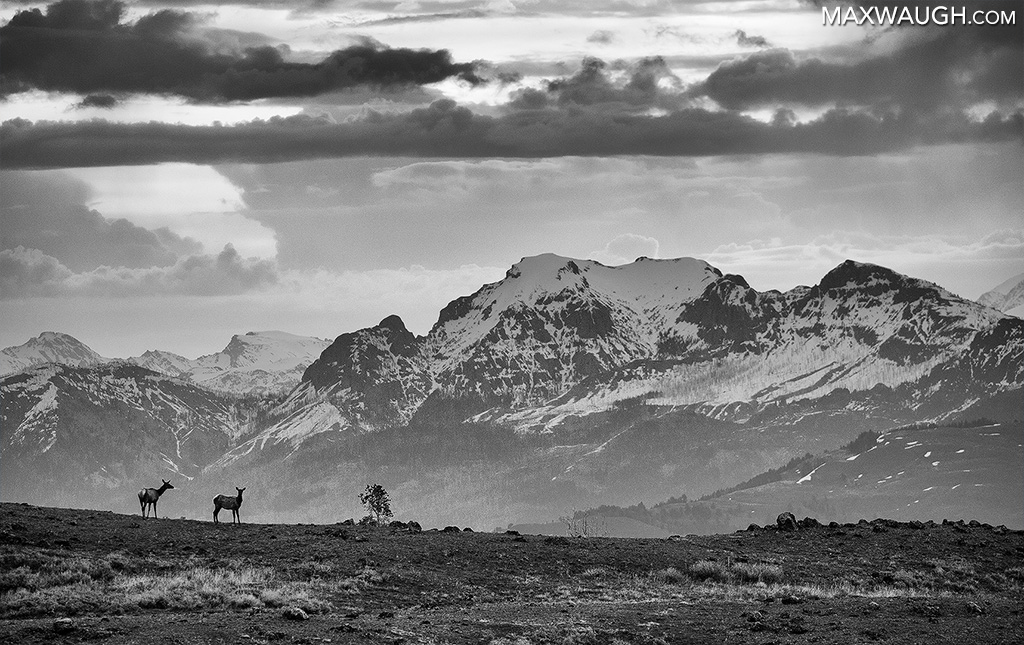 We made it there in good time, and patrolled the road waiting for the family to emerge, along with a dozen other patrolling vehicles. After several passes and no luck (other than a surprise sighting of tolerant Sandhill cranes), we called it and drove back east, and then south. Things didn’t get any better there. Multiple visits to the owl spot and a trip out past Sedge Bay and back yielded little more than a rare Swainson’s hawk sighting. Even the grouse on Lake Butte fled the moment it saw us. Nonetheless, my guests were loving life, exclaiming how amazingly beautiful everything was. There was a nice cloud. 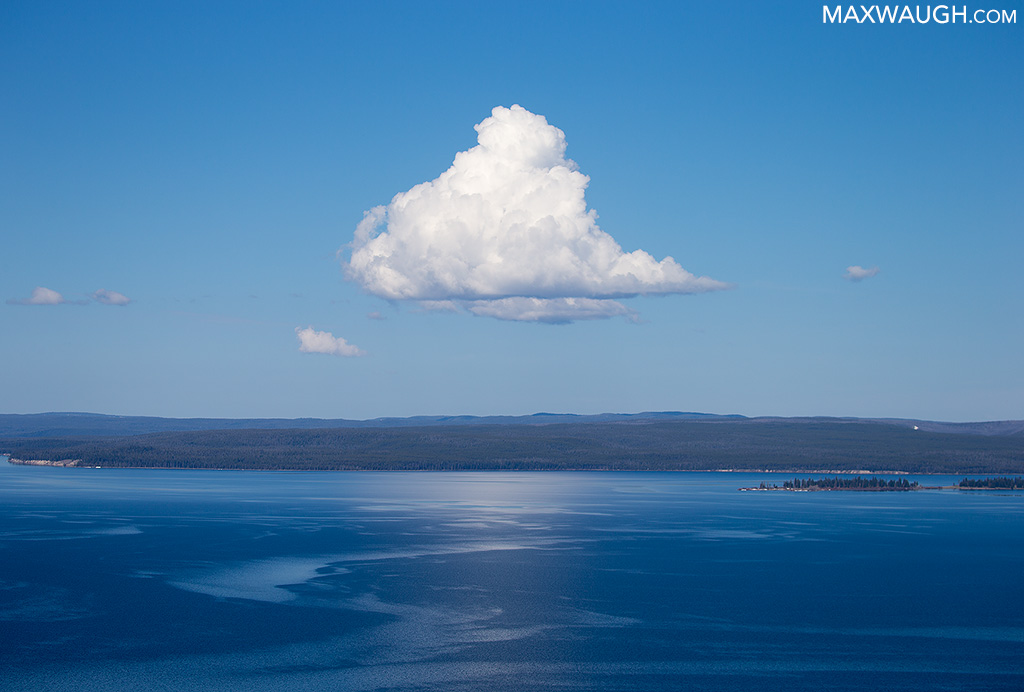 Sergio and Gladys definitely had the right attitude during a seemingly-slow morning.

As we backtracked along Mary Bay, we came across an unfortunate but rather odd sight. It was your typical “tourist moment”—there were a great many of those today—which are inspiring a lot of photographic public shaming online these days. There’s no reason to do that here, but it was weird trying to figure out what a man was doing standing 15 yards from a resting bison, his arms cross and legs spread.

Was it a staring contest? Was it a battle of wills? Honestly, he was posing like he was having a no-hands pee in his pants. And let’s face it, that’s exactly what would have happened if the bison had grown tired of him. Was he proving his manliness? If so, his rented Camaro undoubtedly felt irrelevant and underappreciated in that moment. It was ridiculous and comical.

We lunched near the Yellowstone River, and then I took my guests to see Yellowstone Falls. More gushing about the beauty of this place (see what I did there?).

I had mentioned to them that morning that our pursuit of rewards in the south might end up in a slow morning, but the northern range could make up for it in the afternoon. That’s exactly what happened.

We had just begun cresting Dunraven Pass when we came across a family of tourists looking down the hill beneath the road. Fortunately, there was a safe place to pull off nearby. This was an area where it’s normally tough to spot or view much, due to the lack of pullouts and sharp curves. But these folks had managed to find something pretty interesting.

It was a black bear family, and they were in the process of eating an elk calf. Alive. 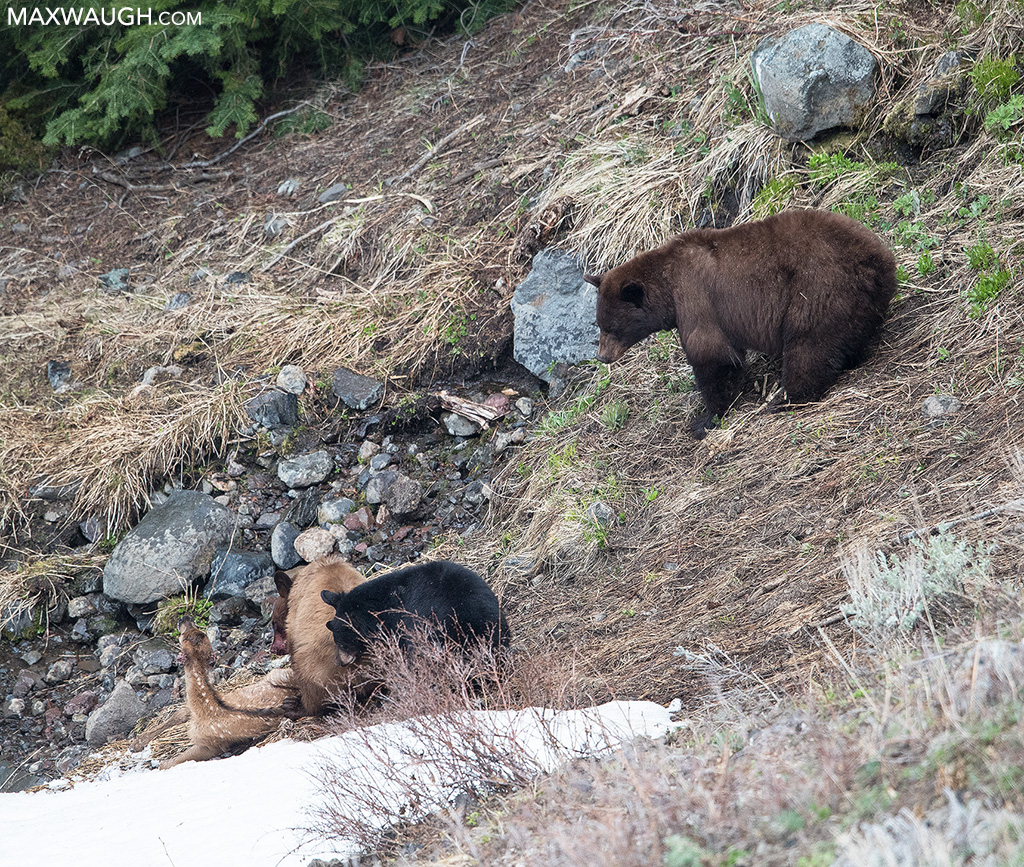 Though gruesome and uncomfortable for some, it was an interesting ritual to witness (and the first bear-on-elk kill for me in the park). The cinnamon sow was purposely keeping her distance as her yearling cubs consumed the baby elk. This type of behavior is common in big cats too. It’s a mother’s way of teaching her young how to kill. They were obviously still figuring things out, since the calf would cry out occasionally and thrash weakly every few minutes. It stayed alive for at least fifteen minutes after our arrival. The mother elk was visible far away through the trees, holding out hope her little one could somehow escape. It was not to be.

The bear sightings multiplied after that, though they didn’t lead to any close photo ops. Grizz at Round Prairie, cinnamon boar at Warm Creek, multiple blacks at Petrified Tree (including a sow with coy that was different from the sow with coy I was expecting to see). We also sought out moose in the northeast, but the only one we found was a cow standing on the berm right next to my driveway in Silver Gate.

We returned to the park, and after a good thirteen hours on the road with my new friends, we parted ways. I expected and hoped for a quick drive home from Roosevelt, but that didn’t come to fruition. First, I stopped to chat with a friend about our respective days. Then I made some stops for wildlife, including bison swimming across the Lamar River… 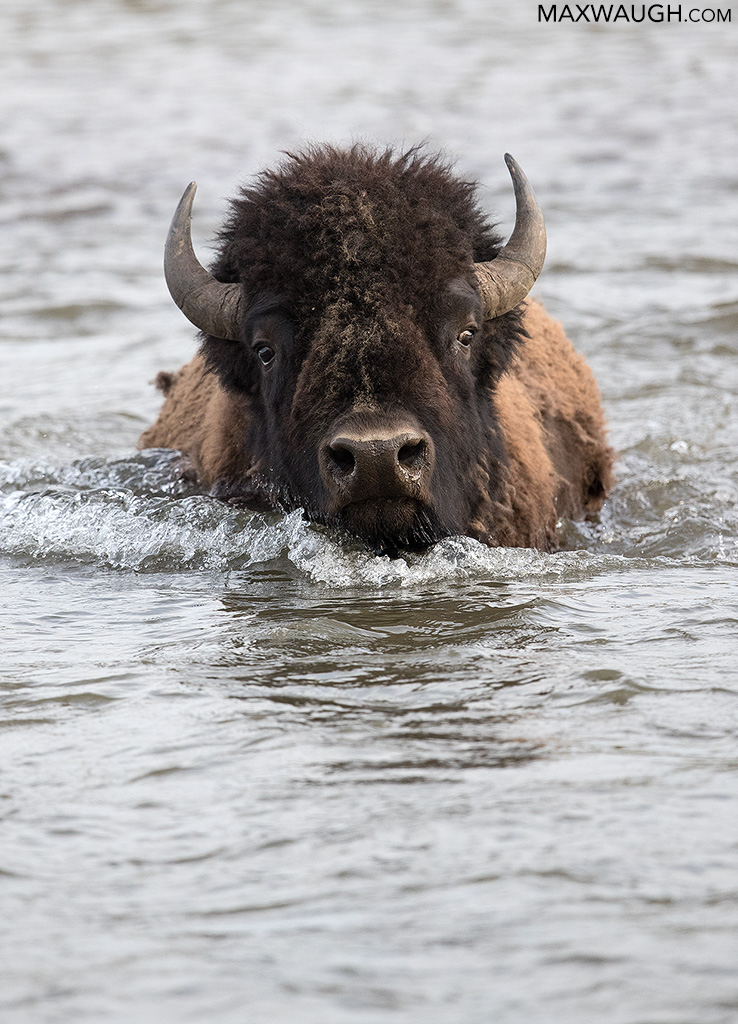 …and a surprise red fox near the road. 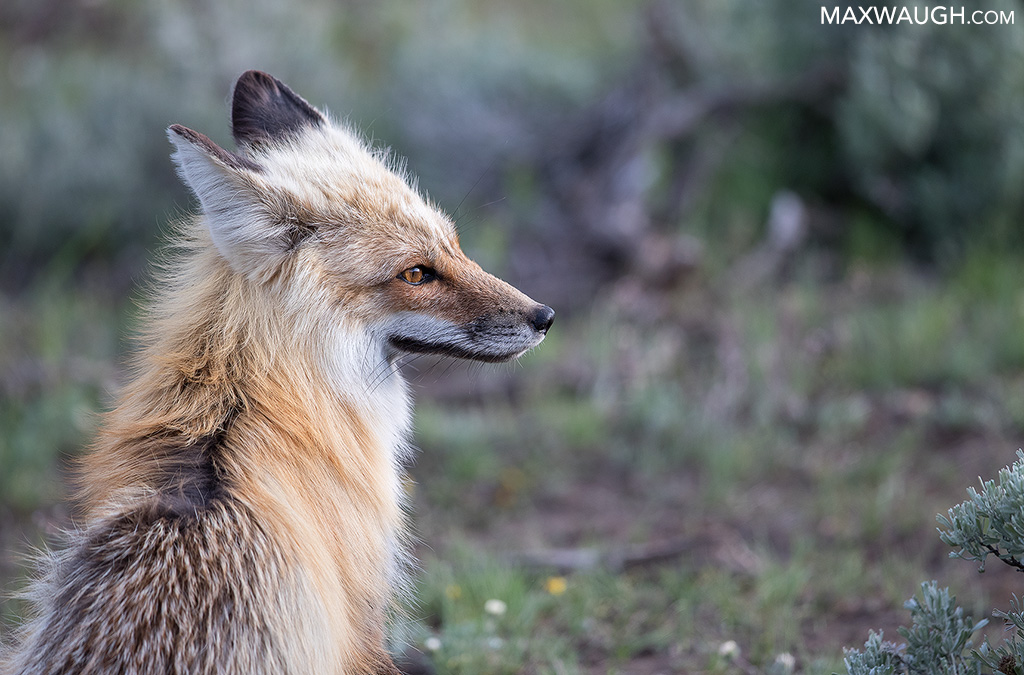 That was followed by the not-so-surprising Drivers Who Freeze When a Bison Is Within Fifty Feet of Their Car (refresher course). Thank goodness a ranger drove in to clear the mess. Though irritating, this delay proved to be a bit fortuitous, seeing how I could have arrived in Ice Box Canyon two seconds sooner and been plowed off the road when a car passed a stopped vehicle (occupants watching a bear) on a blind corner. My far-too-polite (given my exhausted state of mind) suggestion to the driver of the parked vehicle to get moving was promptly ignored. I blew off steam by imagining my reborn corpse crawling out of the fiery crash in Icebox Canyon, just like the Swamp Thing emerging from the muck, ready to exact revenge on the drivers that wronged me.

Yeah, I was overdue for sleep.

Of course I slept in. Second time in three days, so it should feel wasteful. But when the moose with twin calves appears out of the willows on your property, the morning’s not totally shot. 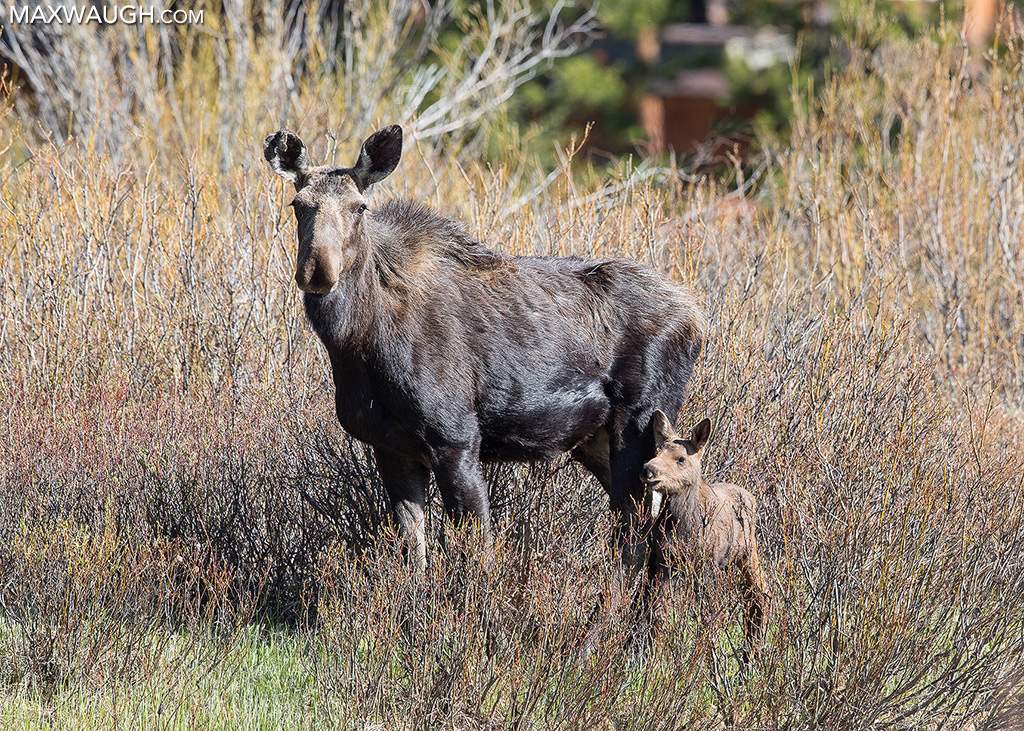 I did manage to plow through a lot of work this morning, even if I didn’t join the throng of people all pointing lenses toward my window on the other side of the willow field separating out property from the highway (don’t worry, I had clothes on). Though there was still a bit of prep work to do before tomorrow’s client pick-up, I was determined to get into the park and enjoy what looked to be a lovely day.

My tasks were interrupted around noon when a moose cow with a little calf ran past our second cabin… possibly the Twin Mom separated from one of her youngsters. Reports are coming in of people encroaching on private property this morning to pursue moose photos (this has happened in the past at our place when a grizzly took down an elk), so it would not be surprising if someone spooked the mother, separating her from one of her calves.

I went out to look from my porch as they ran past, came back inside, and almost immediately saw a yearling moose walk past my car. With our sighting of an adult cow on her own here yesterday, I wonder if that other mom has finally booted her teenager and is ready for love again.

After lunch I drove into the park. I followed up on my plan to hike Trout Lake, even though recent reports weren’t promising. Both Trout and Buck were devoid of otter sign. I was back to the parking lot pretty quickly.

From there I made it as far as Hellroaring. No bears out yet, and I kept waffling about heading to parts further west or south. But tomorrow’s Client Pickup Day, and there’s still much to do. I couldn’t venture far. I did stop briefly near the Yellowstone Picnic Area to photograph a ground squirrel standing guard at the entrance to his Doomsday bunker (which presumably is when a fox or badger invades). 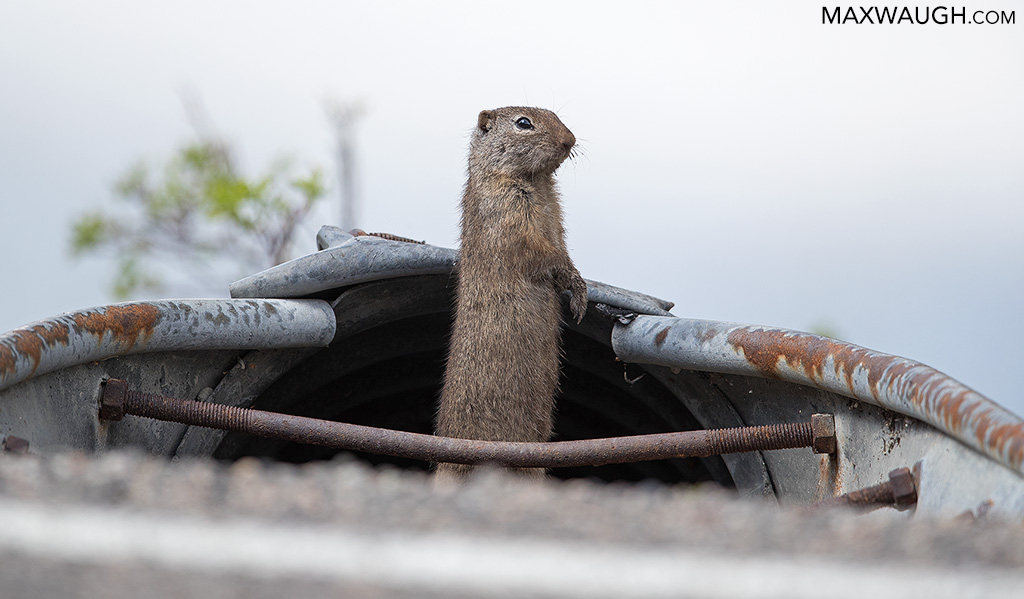 A quick trip down the Slough Creek Road yielded a meeting with friends, who gave me the news of a new wolf kill near Pebble Creek. I headed that way, saw the carcass, but no wolves. There was a little daylight left, and I wanted to spend it more actively than waiting for a distant photo op. I kept heading toward home before pulling over.

On my hiking days this week I seem to do two at a time, so I decided to go for a late walkabout along a stretch of Soda Butte Creek that I have never explored. Walking down toward the creekbed, I soon went out of view of the road. I had the creek to myself. Except for a couple of ducks and geese. I followed the creek eastward, occasionally diverging into the woods.

When I was a kid, I loved to explore around my neighborhood. Though it was the city, there were plenty of undeveloped forested areas and vacant lots scattered around the neighborhood, under bridges, and bordering parks. To this day, I love exploring new places. The creek meandered in the shadow of Barronette Peak. The woods receded, revealing wide meadows (good hunting spots for a Great gray, I’d think!). Along the muddy shoreline, I found occasional tracks. Lots of moose, one set of human prints (which disappeared after the first 300 yards or so)… and big wolf tracks. 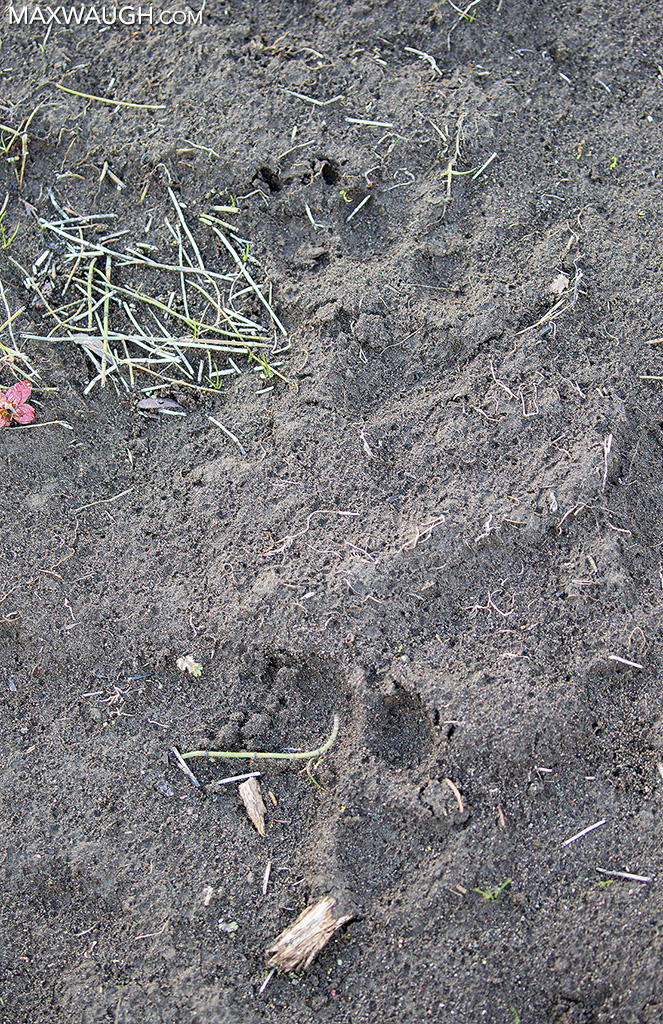 It’s too bad it was getting late and I still had to get back to finish up some work prior to my departure. I could’ve gone another mile or two. It was beautiful and peaceful back there. Curiosity mixed with some excitement, tension (“Hey bear!”) and wonder. It was exhilarating. The best I’ve felt all week, and a fitting way to cap my solo exploration in the park on this trip.

Back home I enjoyed the last bits of daylight out near the creek while I ate. The rest of the evening (after writing this) will be dedicated to packing. Tomorrow I head west to pick up clients for the start of my spring photo tour!