Here we go! Another season of Husky Football kicked off with a day game. It’s not often I have to apply some sunscreen before a game any more, but even with overcast conditions early I was happy to do so. On the drive down to campus, I settled back comfortably into my game day rituals. Despite the fact that I’m working on Saturdays at Husky Stadium, many of these traditions probably aren’t too different from most fans’: hauling a ridiculous amount of gear around (in my case camera equipment rather than a cooler and pop-up canopies)… picking up something for a friend’s tailgate (donuts for once!)… noting the flashes of purple on sidewalks and a few extra RVs on their way to E-1… wondering why emergency vehicles can’t be painted purple instead of red in the fall…

On game days I arrive at least three hours before kickoff. I work from the press box, preferring not to crowd the other photographers working on deadline down in the photo tent. So I have to show up early to claim a spot. They usually open the garage doors around this time, so I can listen to the Husky Band rehearsing one last time as I set up. The view up here isn’t terrible, and the sounds—even if they are recycled tunes for the varsity-alumni band show—mean one thing: Game Day! 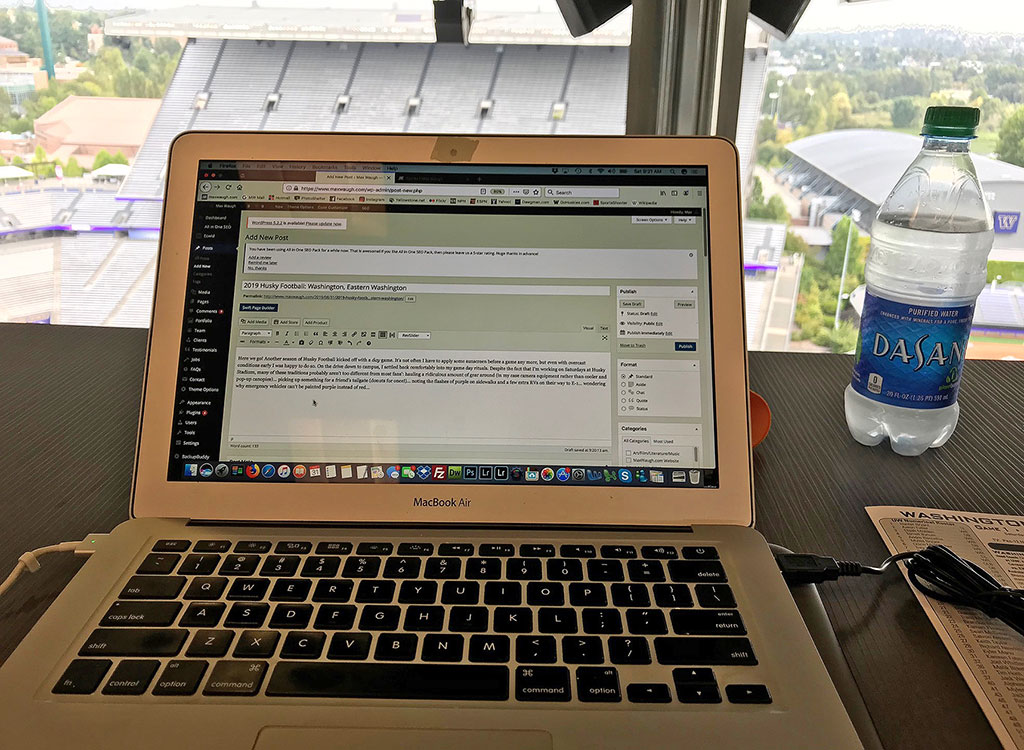 The Dawgs opened the season against a foe that’s given them a surprising amount of trouble in the last couple meetings: the Eastern Washington University Eagles. Washington debuted highly-touted Jacob Eason at quarterback, and has an established defense now, so a close result would be a bit of a surprise. You could almost smell the lofty expectations wafting through the stadium. Eason held up his end of the bargain, passing for 349 yards and 4 touchdowns, as the Huskies beat the Eagles 47-14.

View the full collection of images from the game in the photo archive. Some highlights are below. 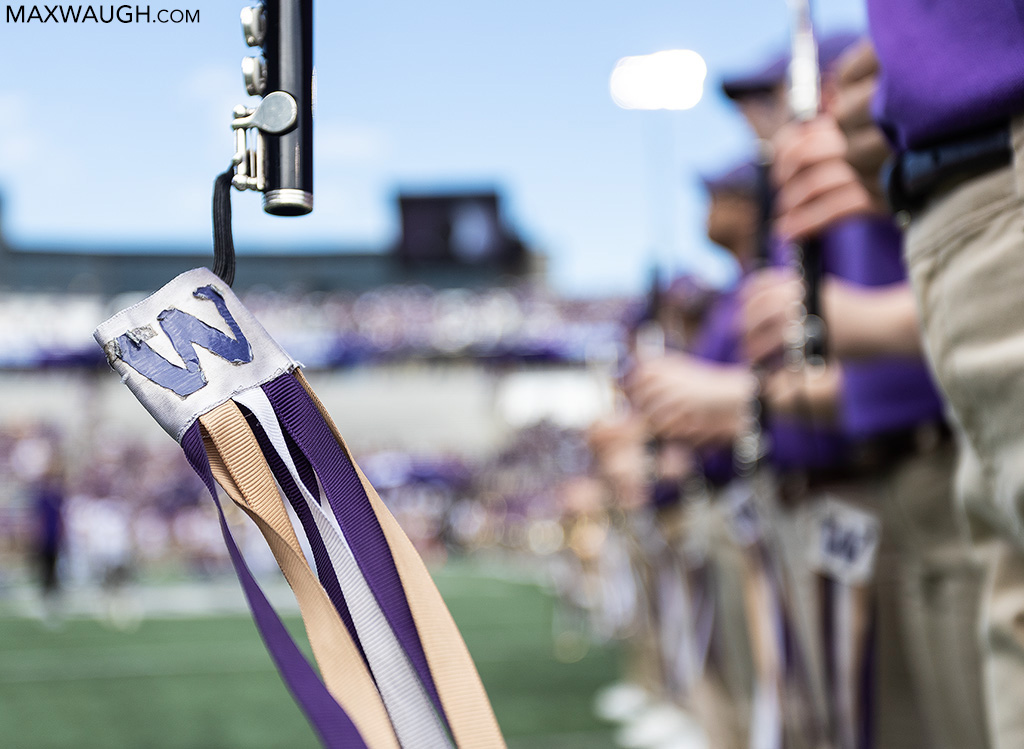 The Husky varsity/alumni band waits to welcome the Huskies onto the field. 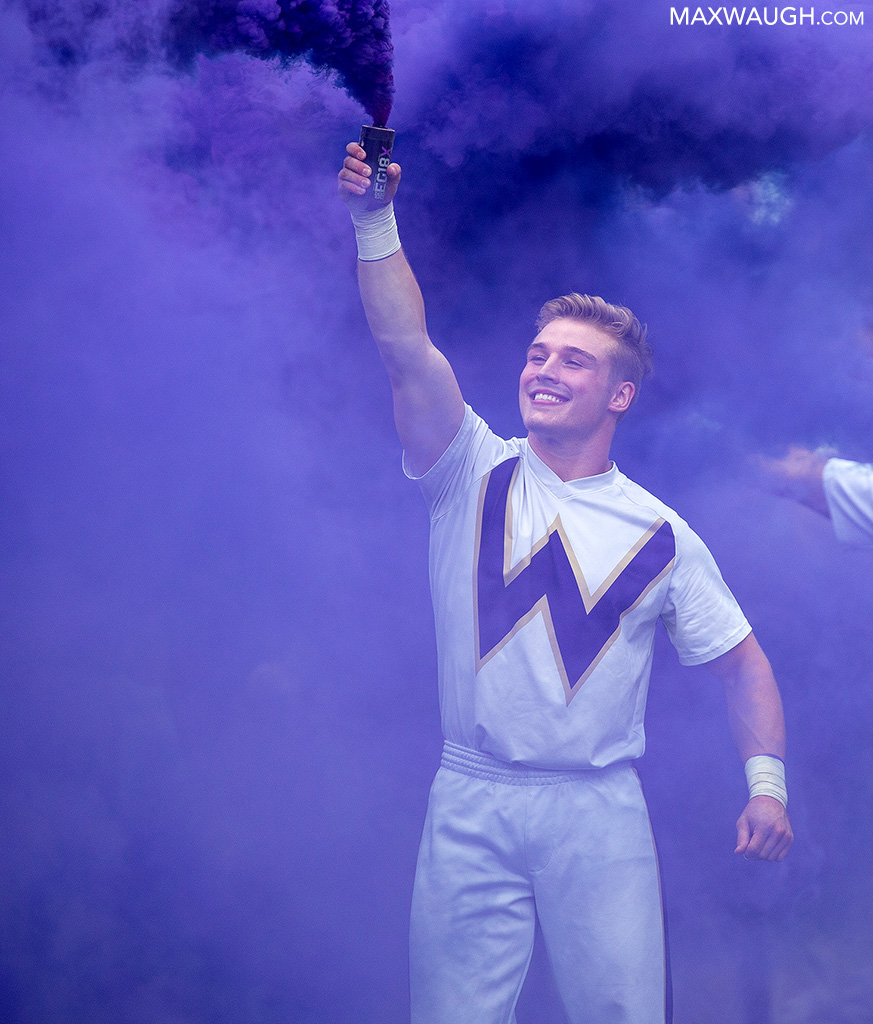 A Husky cheerleader gets the purple smoke going. 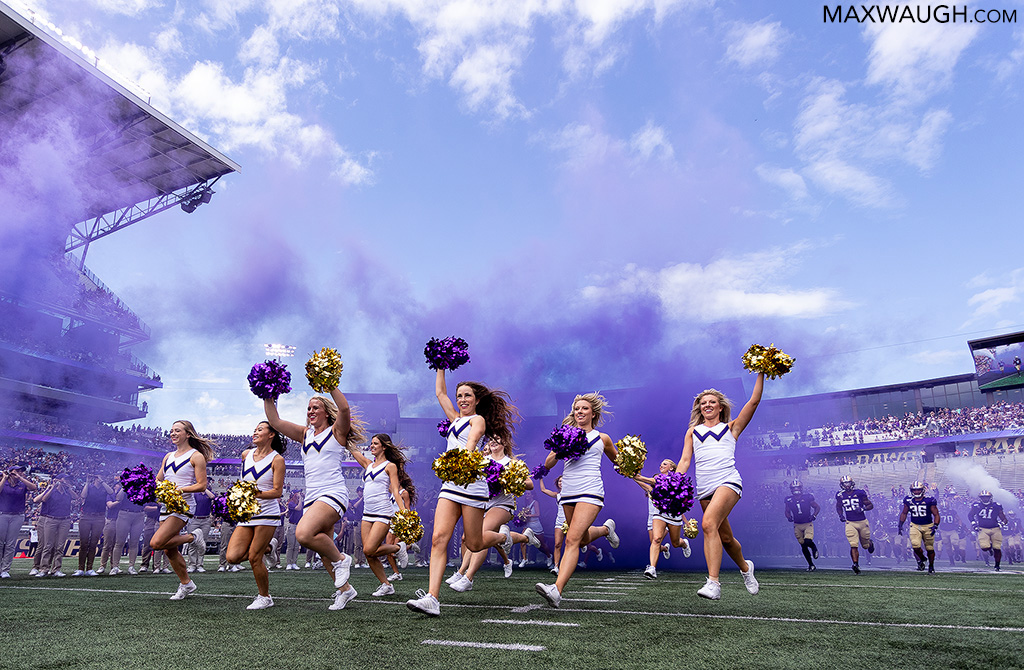 Cheerleaders lead the Dawgs onto the field. 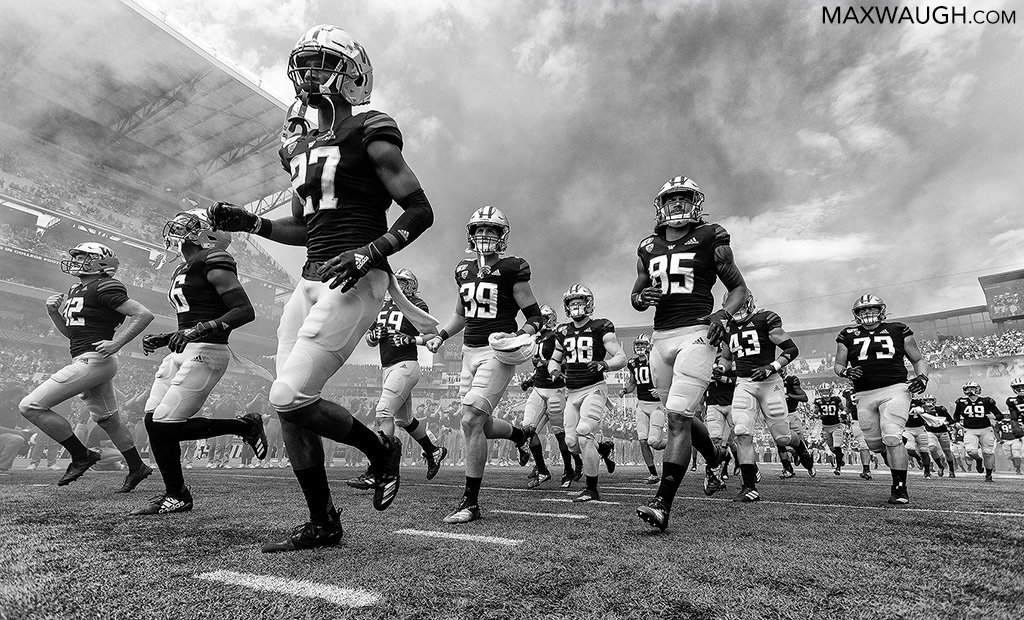 The Dawgs take the field. 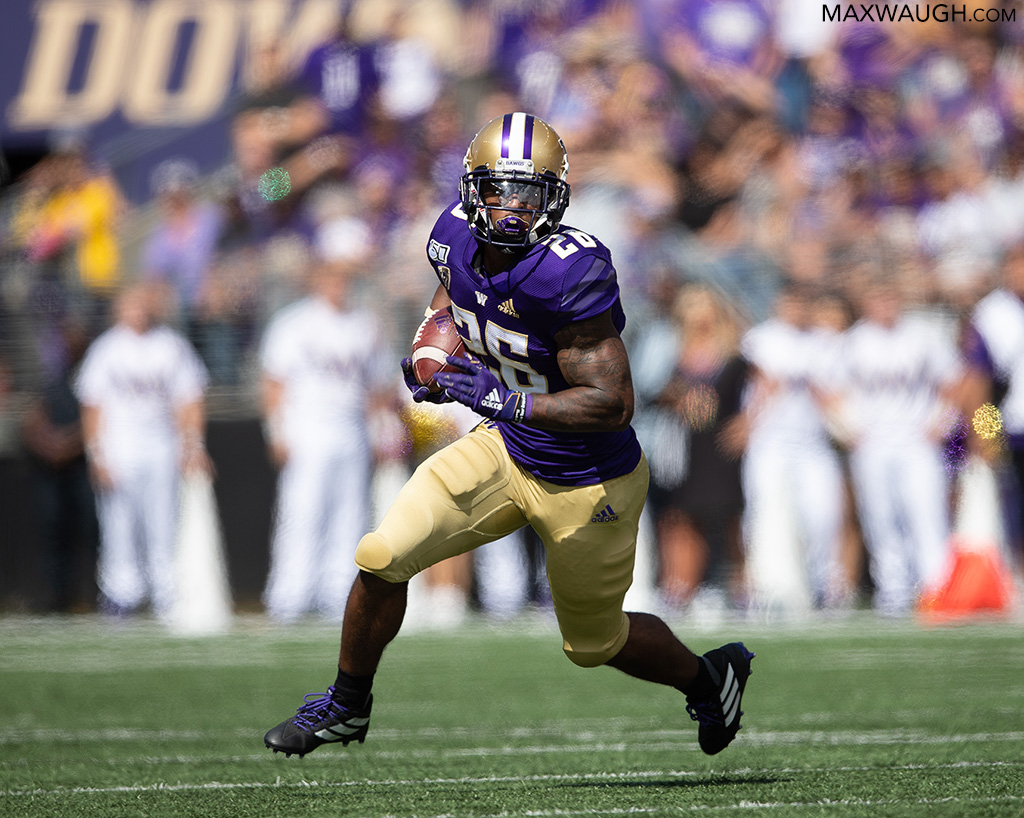 Salvon Ahmed started at running back for the Huskies and finished with 44 yards rushing and a touchdown. 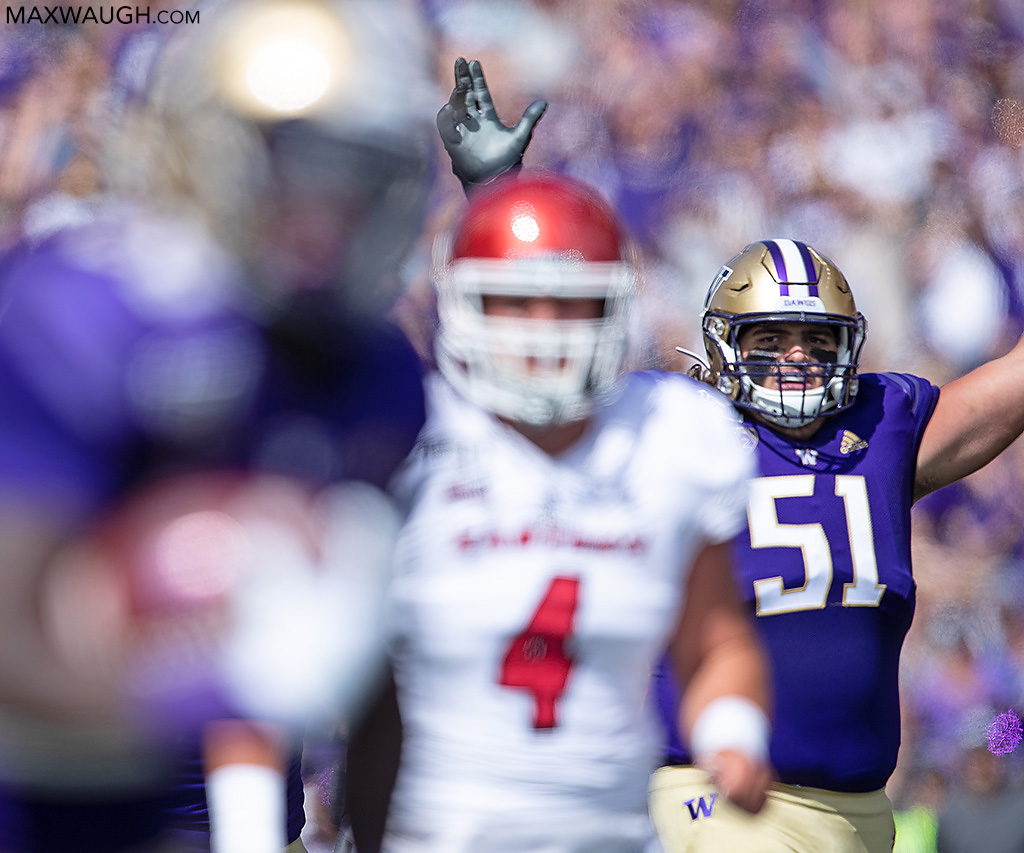 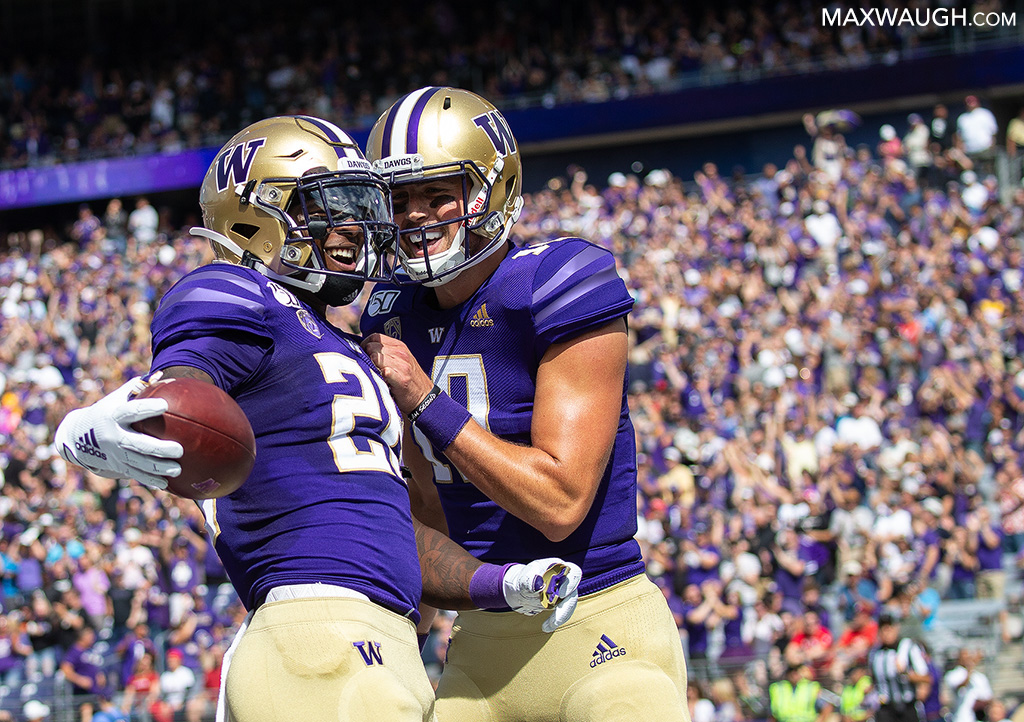 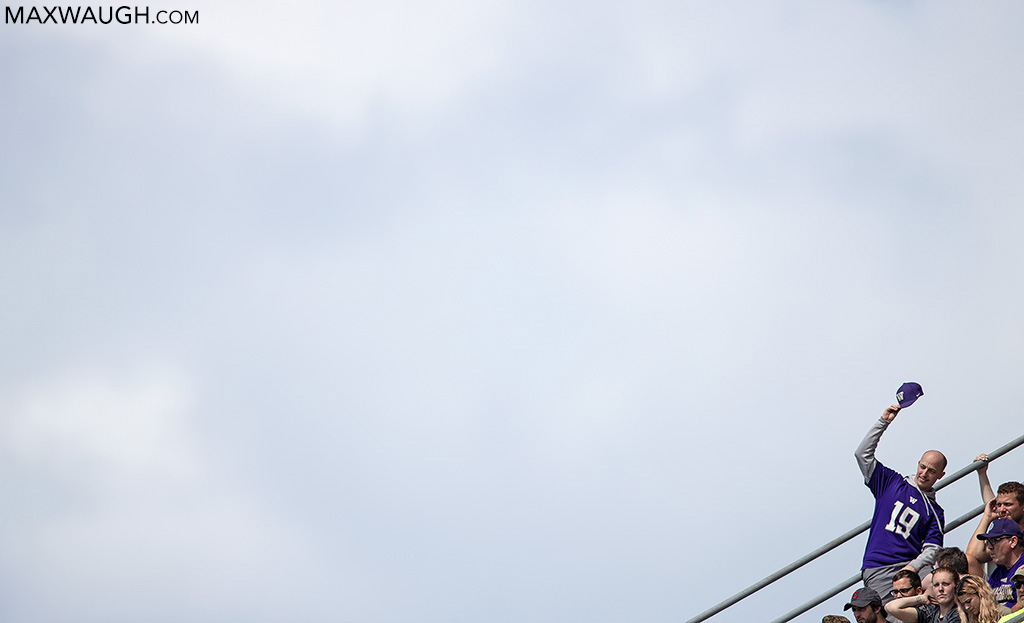 A Dawg fan in the upper deck gets amped at kickoff. 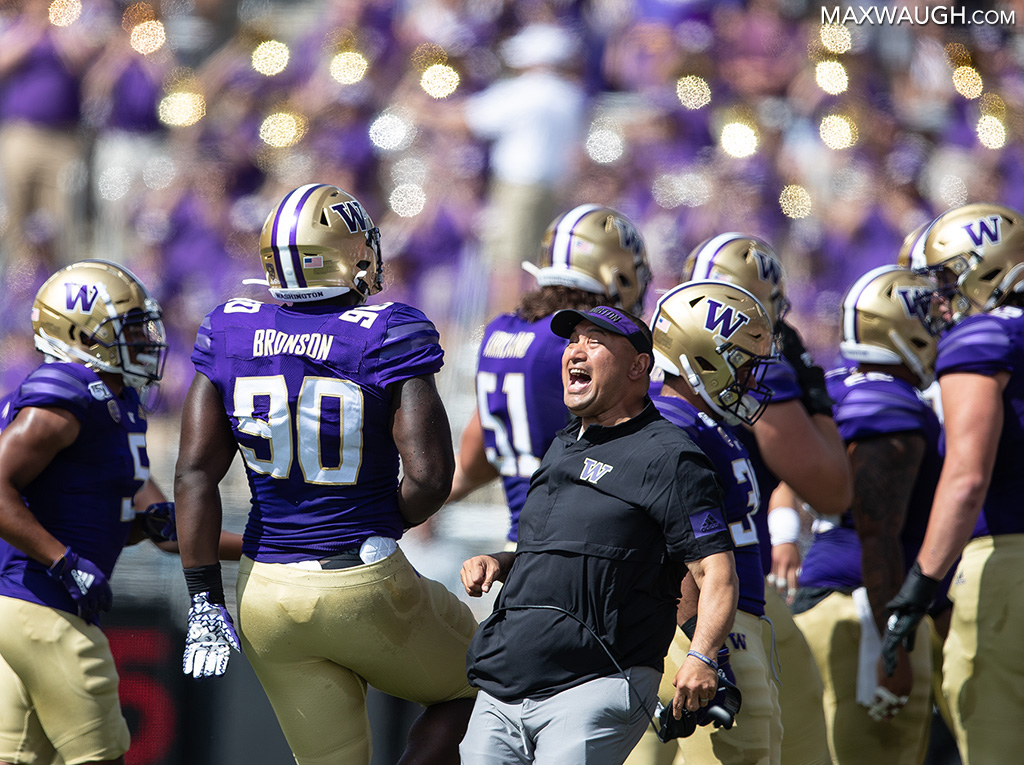 Defensive line coach Ikaika Malloe is fired up after a big play by the Huskies. 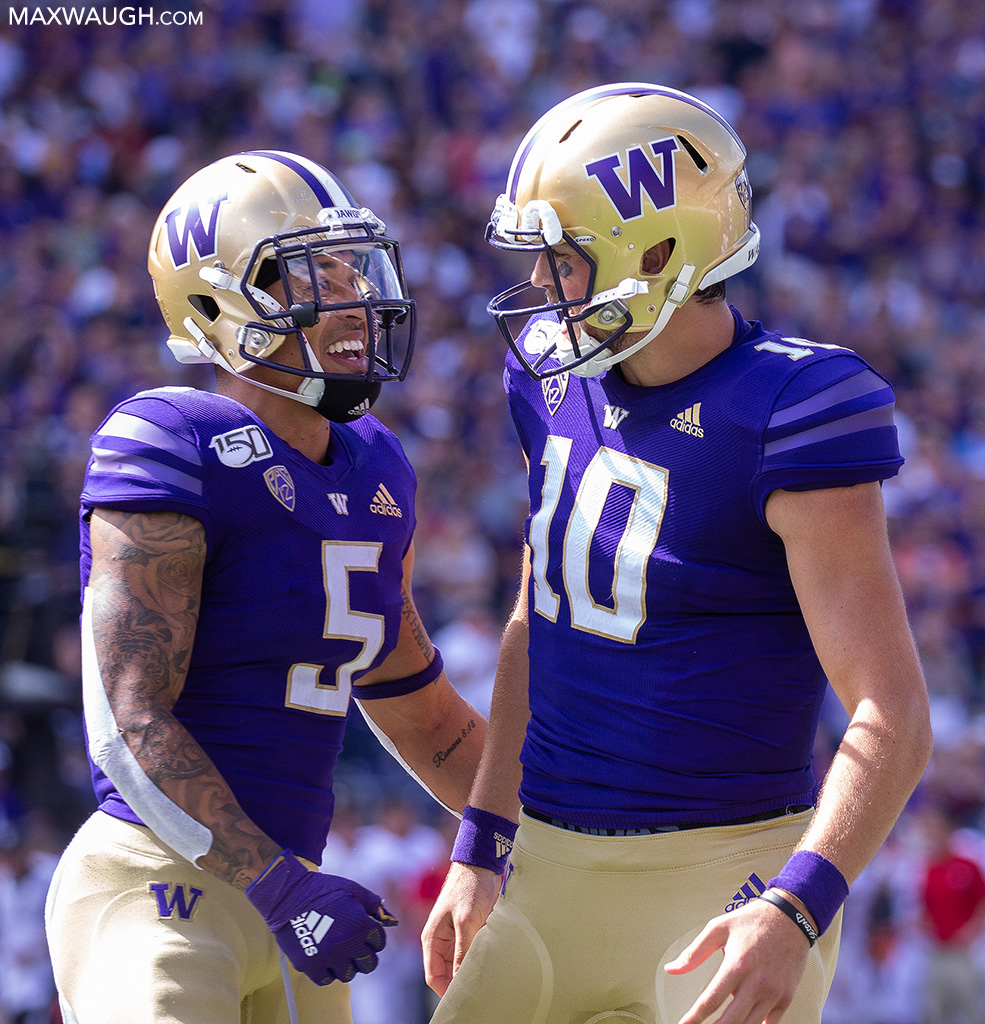 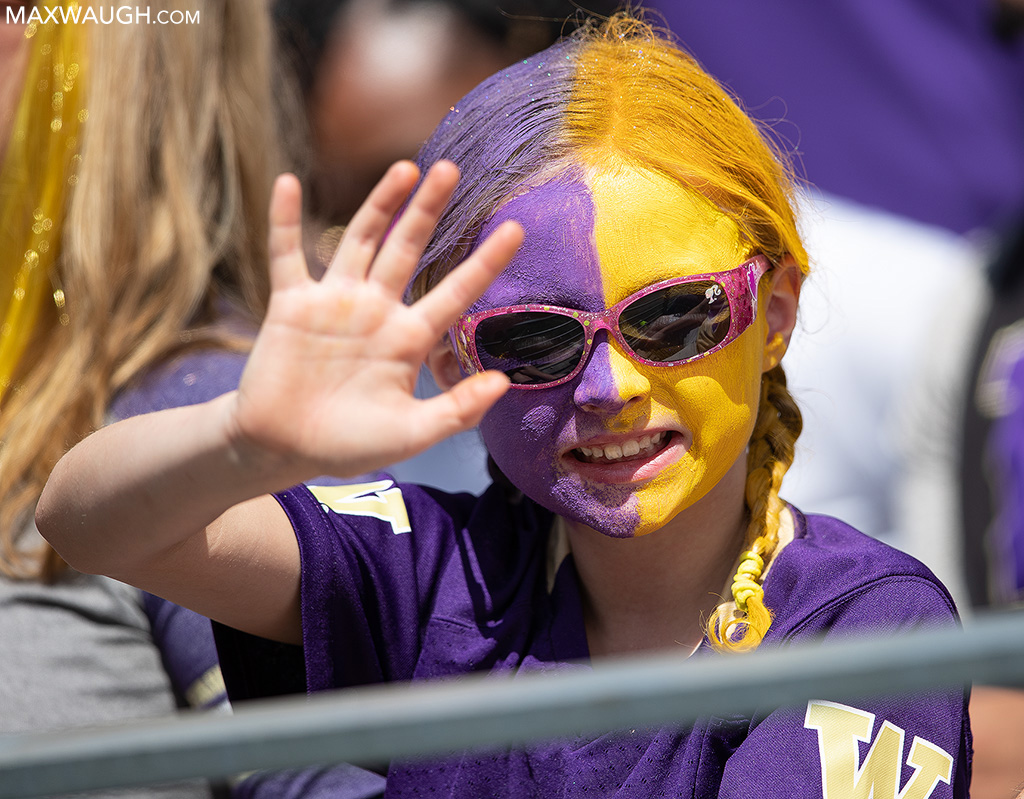 A young Dawg fan shows off her colors. 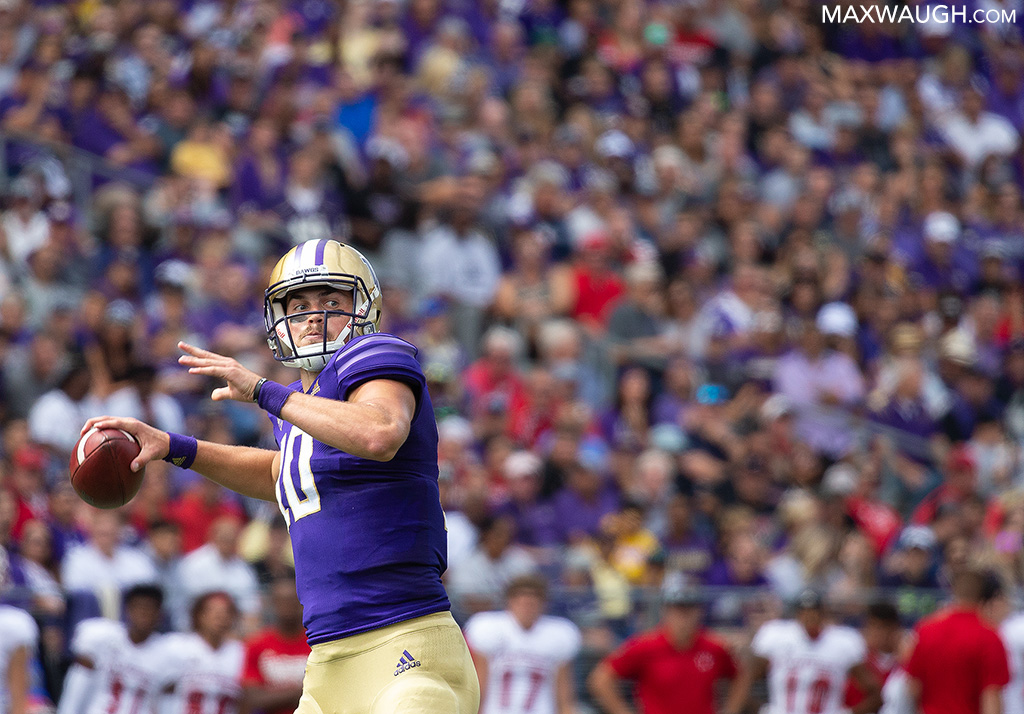 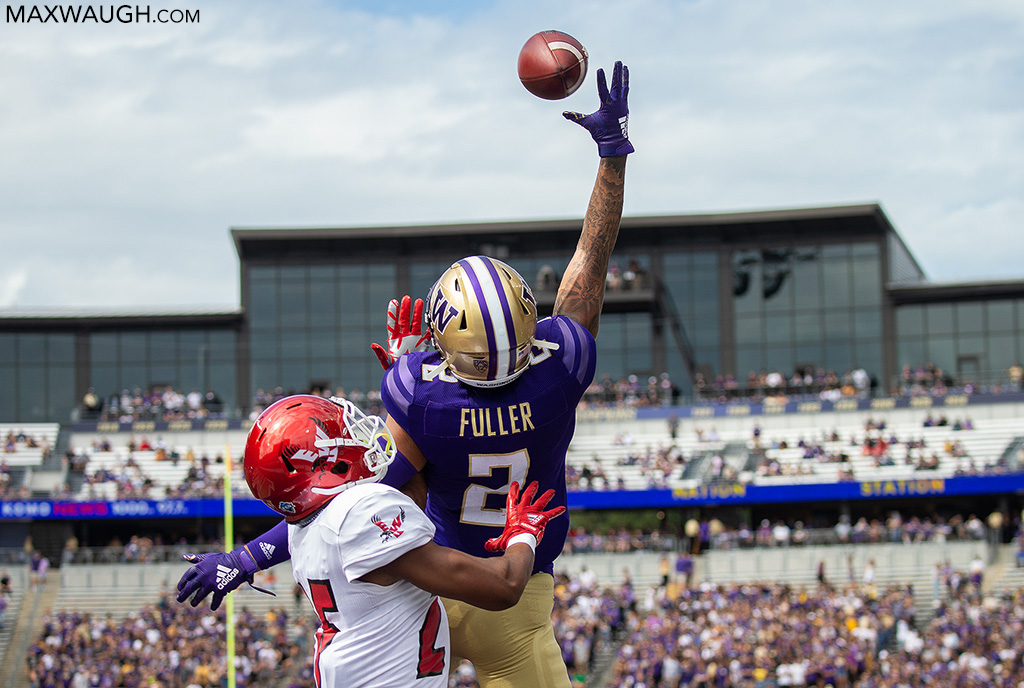 Aaron Fuller pulls in an acrobatic one-handed catch for a touchdown to put the Huskies up three scores in the first quarter. 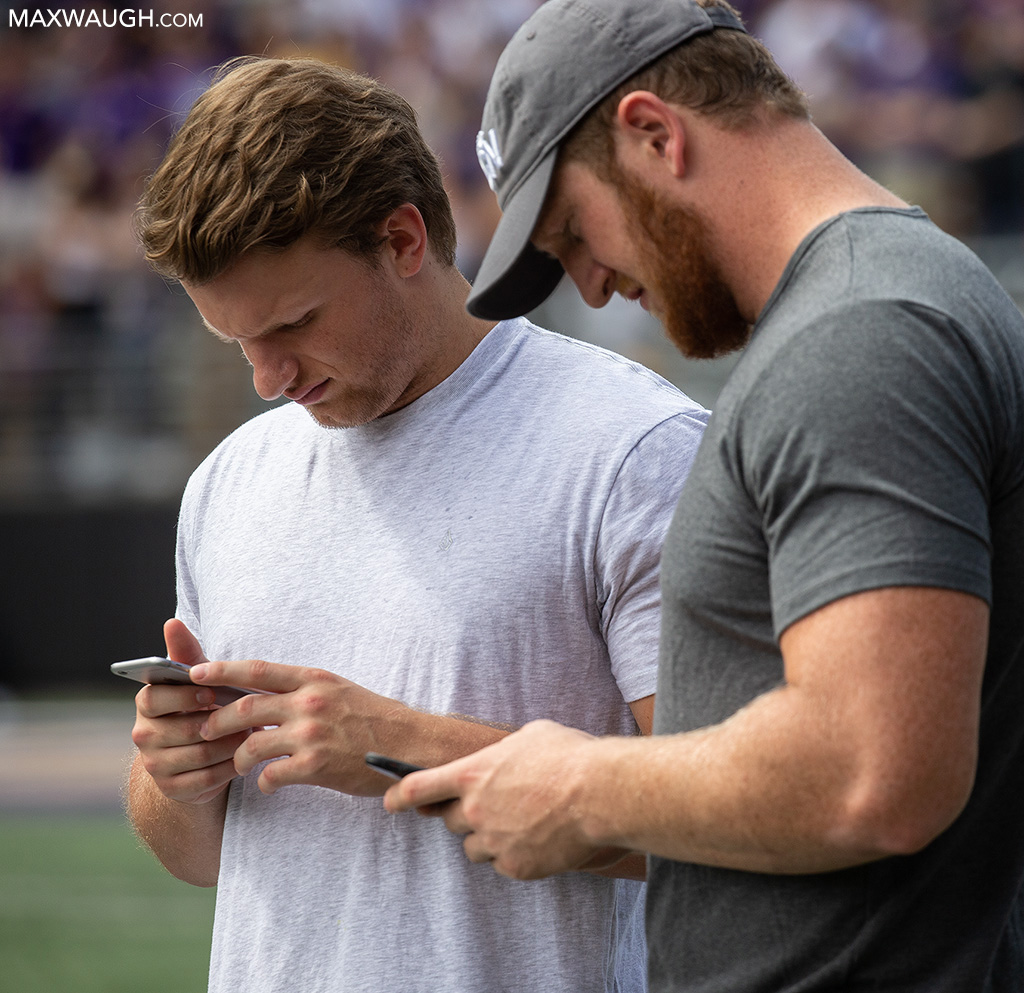 Ben Burr-Kirven (with fellow Seahawk Will Dissly) awaits news of his NFL fate on cutdown day. BBK appears to have made the team. 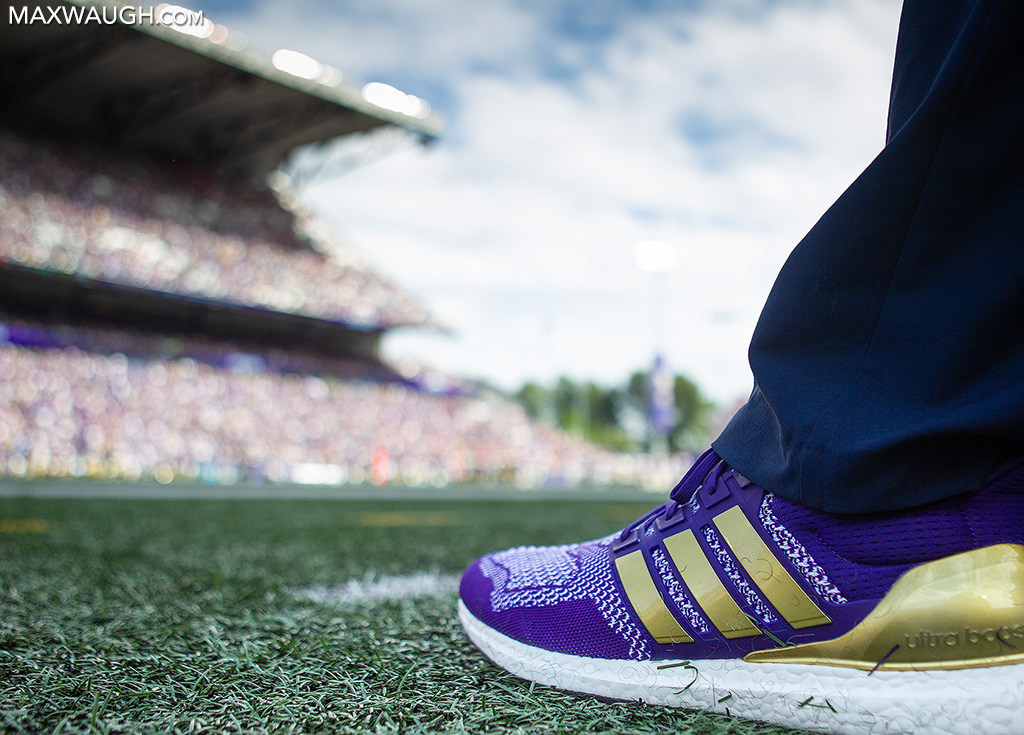 The adidas Ultra Boost was made available to a select few Dawgs fans this morning amid much fanfare. Did you get yours? Didn’t think so. 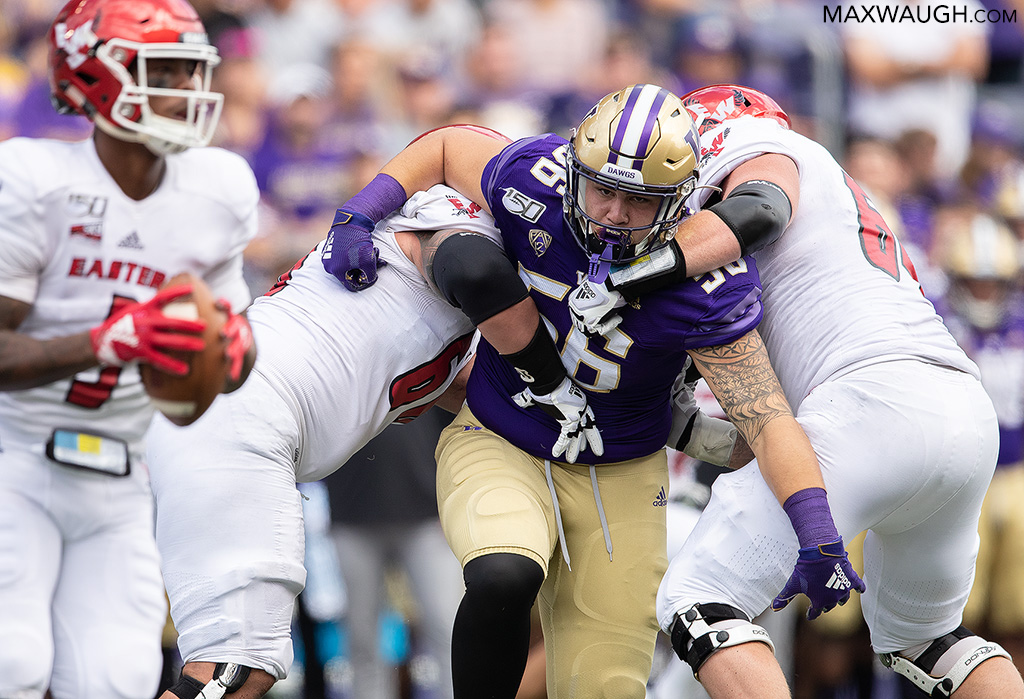 Freshman Laiatu Latu gets double-teamed on his way to the quarterback. Latu would later record a safety for the Dawgs. 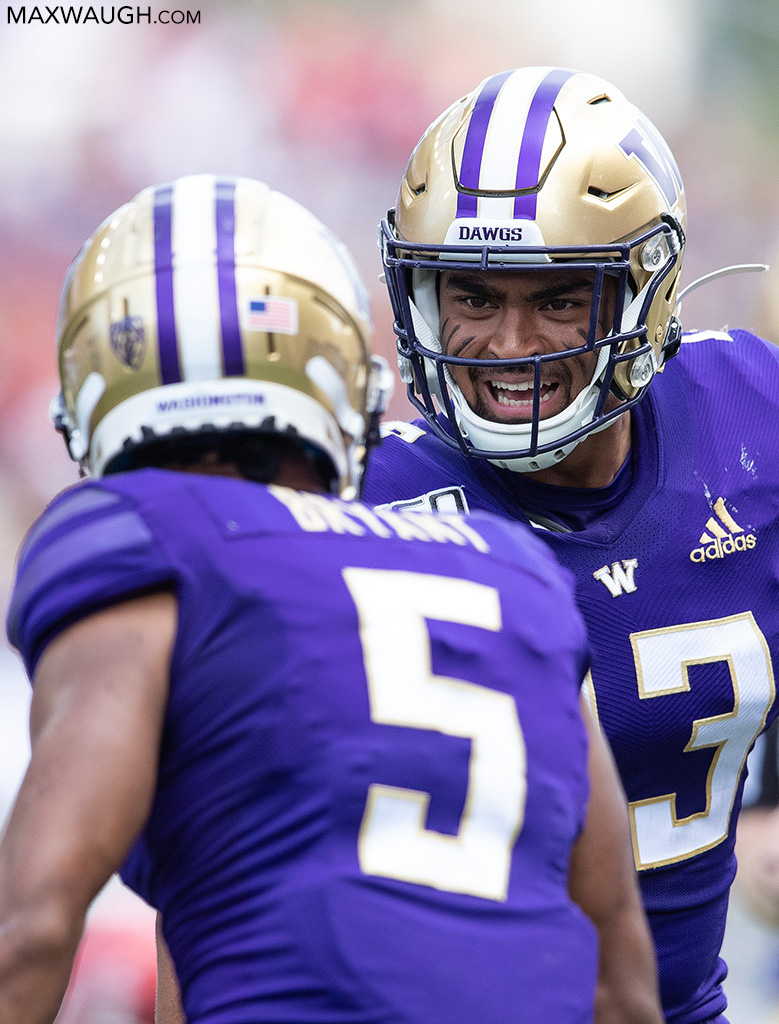 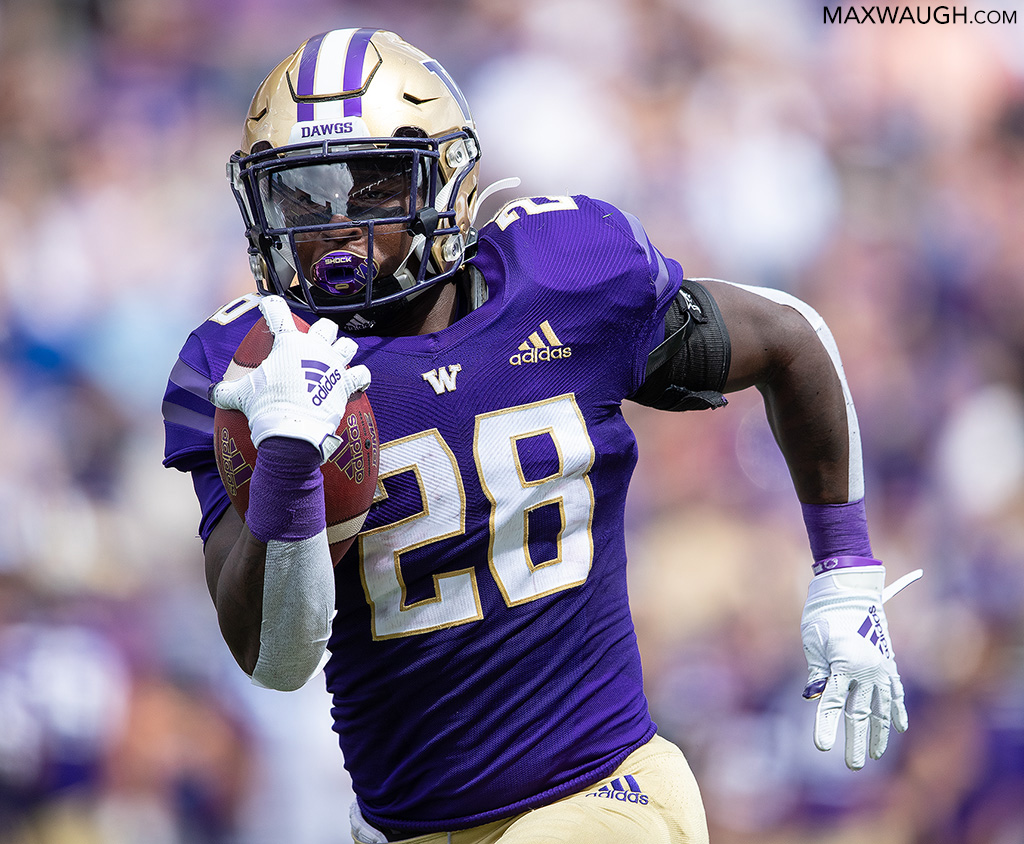 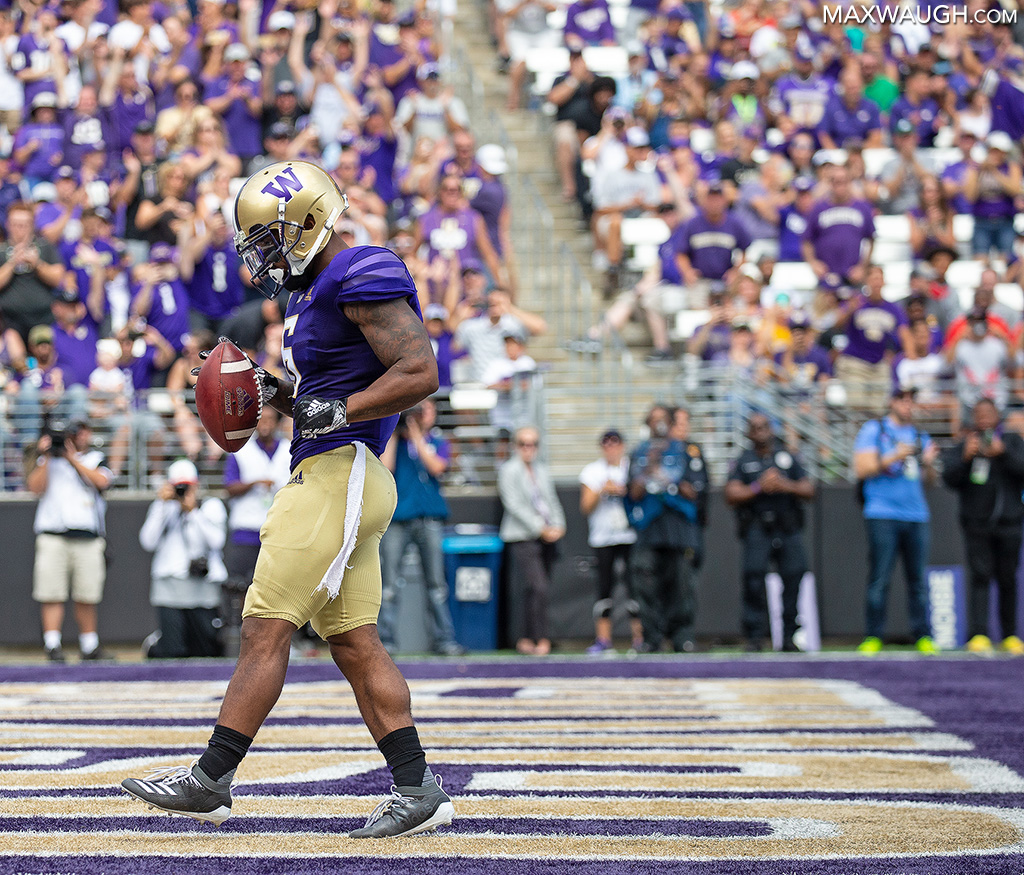 Chico McClatcher was a welcome sight, scoring a ten yard touchdown in the second quarter. 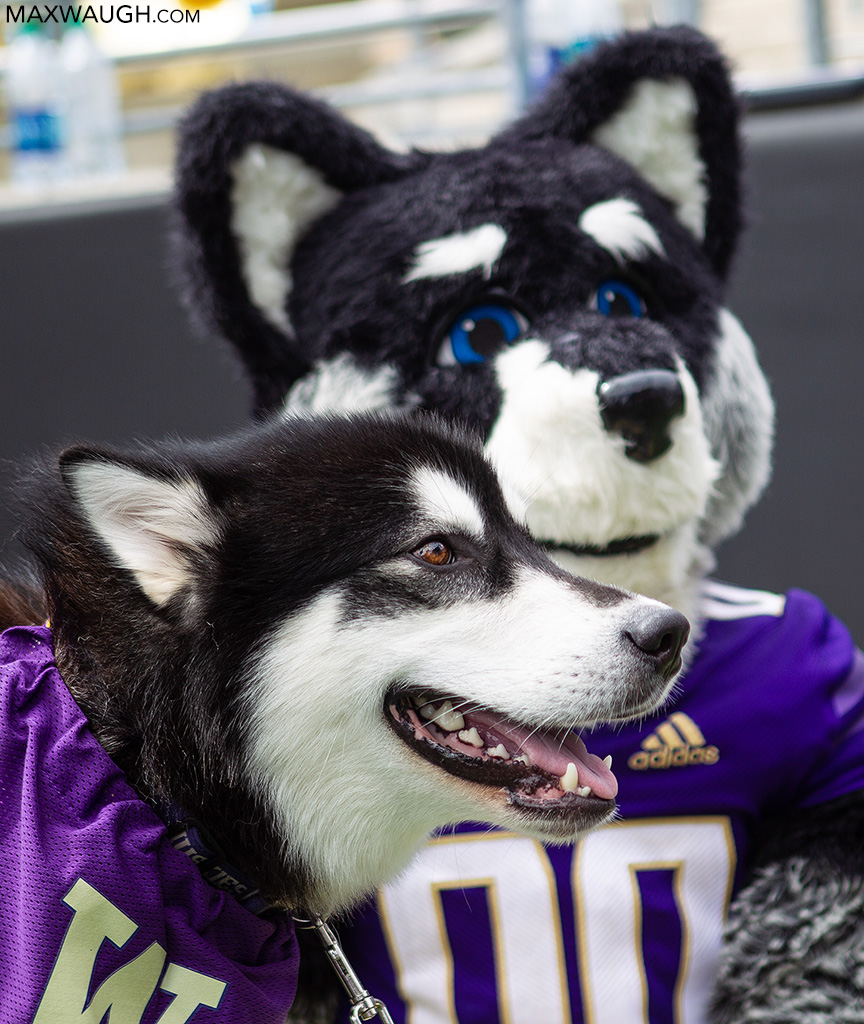 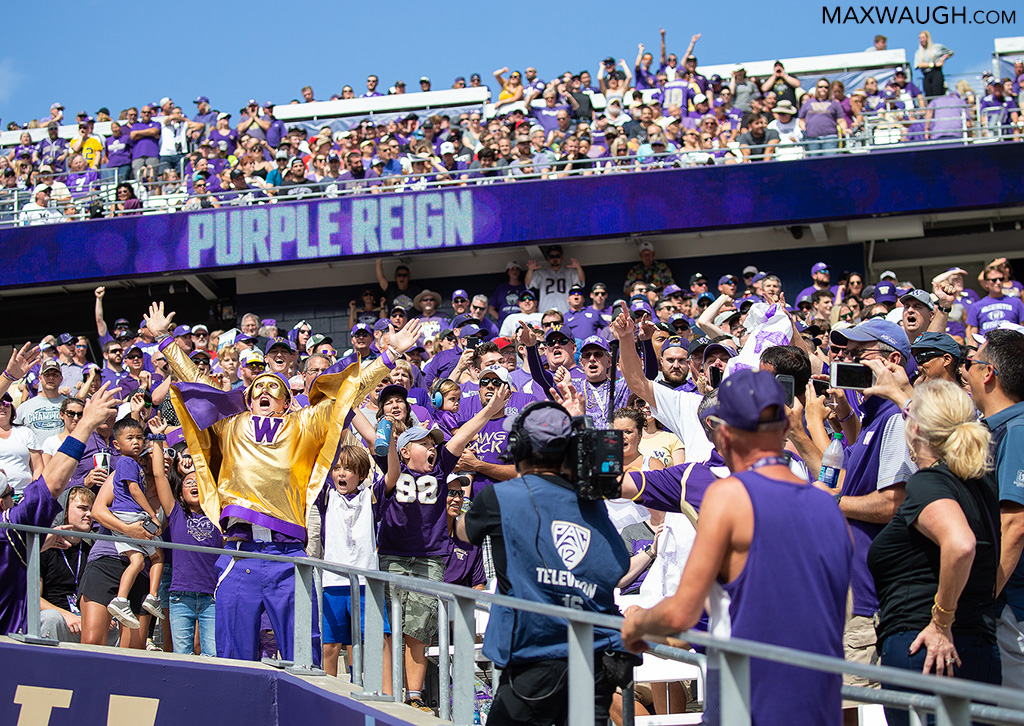 Captain Husky riles up the fans. 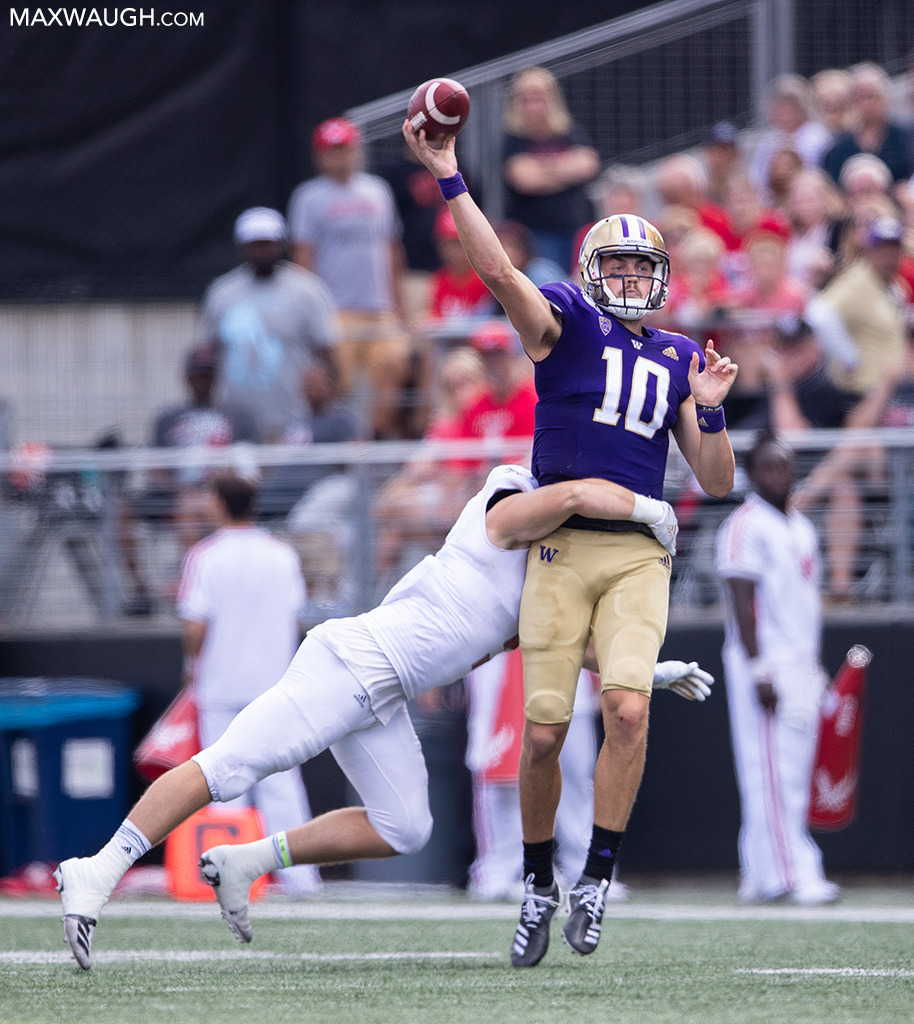 Jacob Eason uncorks a pass under pressure. It was complete to Hunter Bryant. 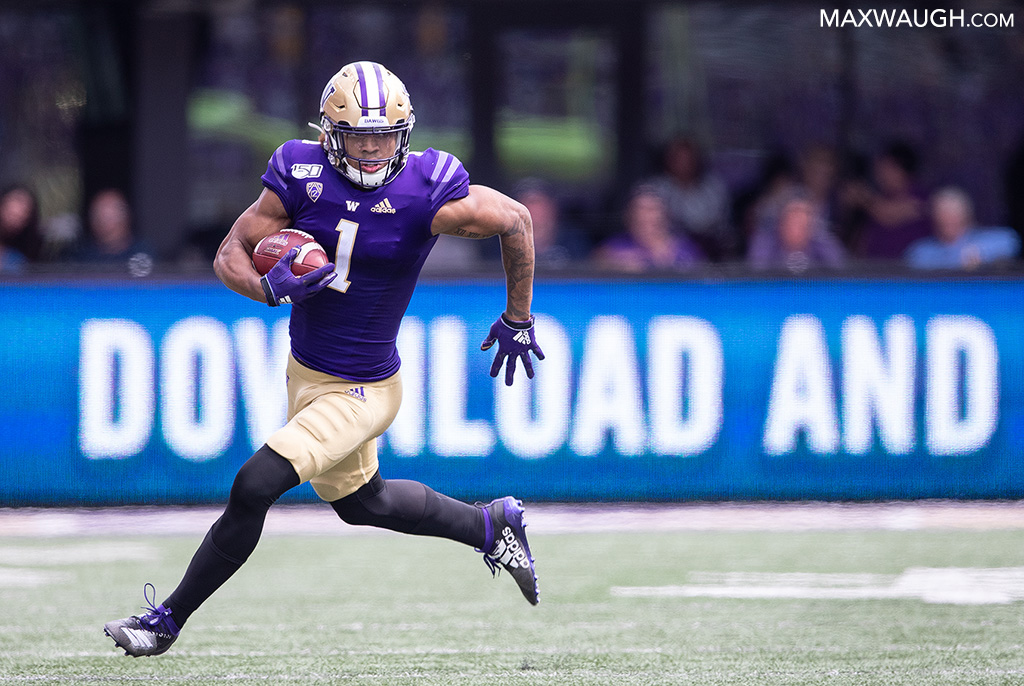 Despite rumors to the contrary, Hunter Bryant looked pretty healthy. 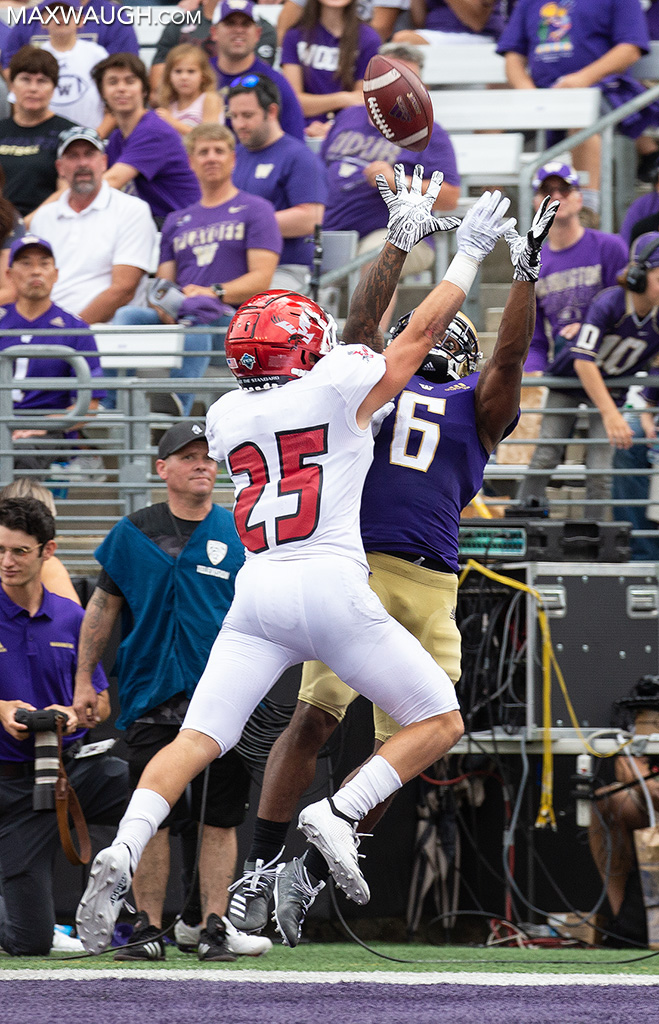 Chico McClatcher couldn’t quite pull in this pass, which was batted away by Calin Criner. 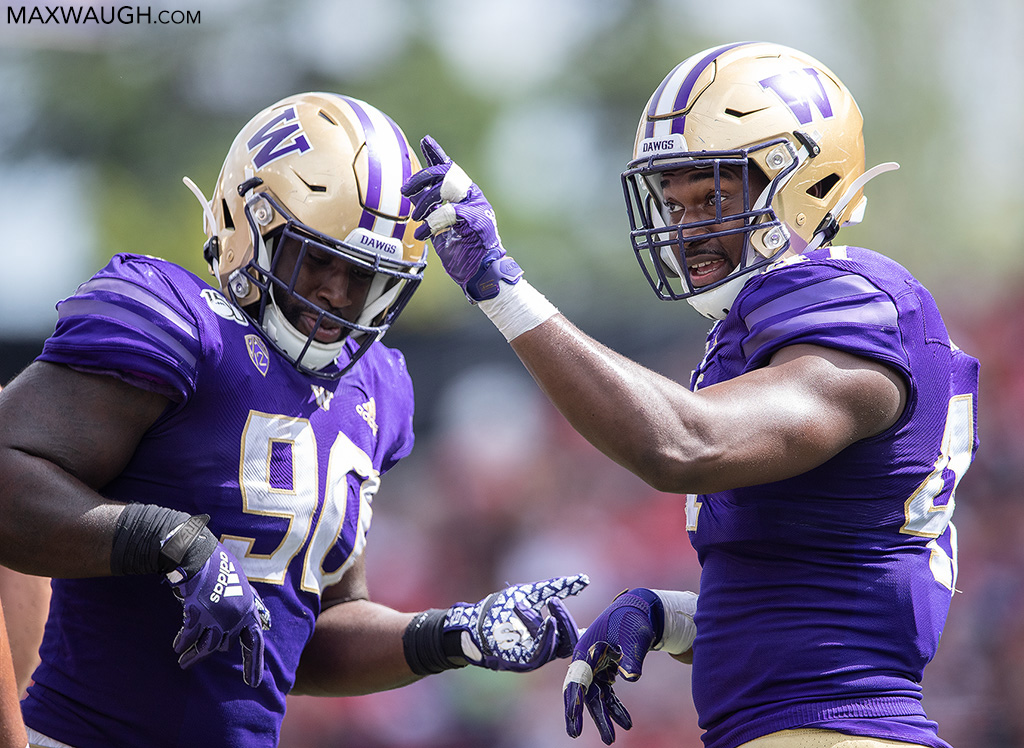 Myles Rice and Josiah Bronson dance and play some air guitar during a timeout. 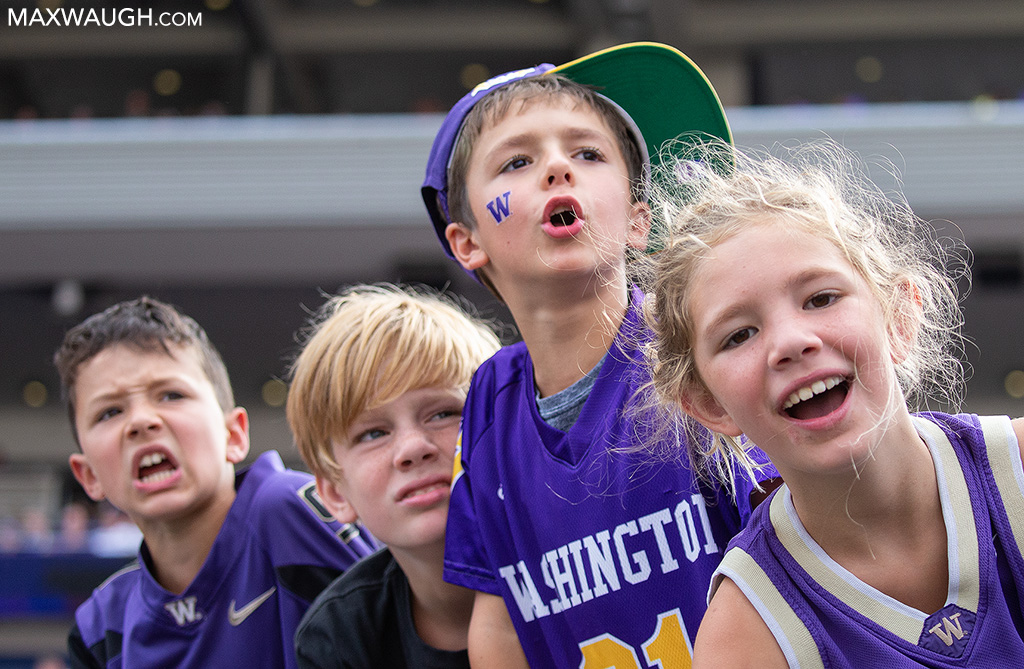 Young Husky fans hope to land free goodies from the cheer squad during a timeout.

See a few more photos from this game in the archive.