It’s the tenth anniversary of the 2009 Apple Cup (won 30-0 by UW), which happened to be the final Apple Cup played in the “old” Husky Stadium prior to the 2011-12 remodel. That was also the game which I covered not as a traditional photographer… but as a time lapse photographer. It was a wild, hastily-planned project that was somehow pulled off successfully, but not without a lot of uncertainty and some stumbles along the way. Here’s a look back at my one and only completed time lapse project to date…

In the months leading up to the game, I had discovered the time lapse work of Keith Loutit. What set Loutit’s videos apart was that they were shot with a tilt-shift lens, giving everything a miniaturized look and feel. It was a pretty cool effect, and I wasn’t the first to emulate the style.

I didn’t actually think seriously about trying my own project for some time after watching those videos. At some point I picked up a Lensbaby Composer, which allowed me to shoot tilt-shift, so I had the necessary tools. I just needed to be brave enough to take the plunge. A Husky game gave me an excuse, and Husky Stadium and the UW campus provided the perfect venue with lots of high vantage points from which the tilt-shift miniature effect could be put to use.

So I approached the folks with UW with the idea of shooting time lapse only about two weeks before the Apple Cup. By then I was no longer the official UW photographer, having shot my last game for them earlier in the season. They were taking on a new photo team, but still didn’t have full coverage of all the games, and as it turned out they didn’t have anyone covering the Apple Cup (I remember this because there was a problem when head coach Steve Sarkisian wanted pictures of the post-game celebration, and the department had to contact an outside photographer for his shots). Had anyone been thinking seriously about that and they had a bit more money to play with, they probably would’ve asked me to cover the game instead of flying by the seat of my pants on an experimental movie project. 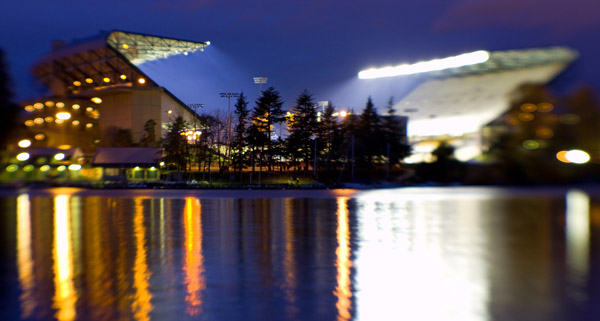 Husky Stadium shot with the Lensbaby. The lower angle didn’t work well in terms of matching the style of the rest of the “aerial” shots in the video, so I didn’t use ground-level angles outside of the opening sequence.

They agreed it might be a fun and unique promotional piece, and gave me approval, so I had to move fast… I didn’t even know how to shoot and edit time lapse photos yet! There was very little time to learn all of that… oh, and basic video editing. So I sat down and learned how to edit videos in iMovie in about two days.

The other problem: coverage. While plotting different angles and shooting locations, I quickly realized I wouldn’t be able to do everything on my own.

Shooting a time lapse requires you to fire off hundreds or thousands of shots from a single location. The still images are then strung together to create what is essentially an animation. If you consider that a single photo needs to be taken every 1 – 5 seconds, and a minimum of 24 frames (shots) per second make up a video, this adds up to long periods standing in each spot. There was no way I’d have enough set-ups—even in 12+ hours—to accrue the necessary footage for the final video on my own. So I enlisted the help of a friend, James Hart, to do additional shooting throughout the day. We had to split up and cover everything from fans arriving in parking lots, to tailgating, to the team’s arrival, to actual football action (probably the most boring and useless part of the whole project, since plays go too quickly at a time lapse pace), and post-game.

James and I met a couple days beforehand to scout the different locations and map out a schedule of who had to be where at what point in the game. I’d already envisioned most of the locations, but being there in person helped us get a sense of the best angles, and where we could actually set up a tripod (not easy in a crowded football stadium).

Throughout the course the of the day, we shot over 29,000 photos, using about 3500 in the finished film. During editing, I discovered plenty of issues, including the fact that we were using different cameras (image quality and white balance settings were very different), and while my camera had the benefit of Live View to help setting a focus point, James’ camera did not.

Somehow we made it work, thanks in large part to spreading out and covering so many different spots. We got special access to the roof of the IMA to shoot the E-1 parking lot. In fact, I thought we had permission to set up just about anywhere in the stadium during the game (facilities had been apprised of the shoot beforehand), until an assistant facilities AD yelled me out of a section at one point. Otherwise, it went surprisingly well.

I had only about two days to put the whole thing together. Music was key, and I was able to find some (relatively) inexpensive licensing for the song we ultimately used 1. I always find music to be a huge part of any video project, and it was quite difficult finding a song with the right beat and appropriate length. When choices and budget are limited, lyrics don’t matter 2. It’s something of a miracle that we found something that fit. The following spring we actually shot a tilt-shift softball time lapse, which would have been great… except we couldn’t find music that matched up, and as a result I abandoned the project in the editing phase.

The next weekend—Apple Cup was not the last game of the season that year—I saw folks sharing the video while tailgating, so I knew it was a (relative) success. I remember feeling a lot of pride in our half-improvised, very-last-minute accomplishment… as well as a great deal of relief.

Since the aborted softball video, I haven’t tried a time lapse again. I’d love to give it a shot in some of the natural areas I visit, but as always it’s a question of time. There’s a reason I barely do any video work any more, much less time lapse stuff. Hopefully there will be a chance to revisit the idea again, and if I can remember the lessons I learned a decade ago, it might just come together a second time.