I’m going to review an apple.

No no, not an Apple computer. Not an iPad, or the AirPods Pro (surprisingly great on planes, btw).

An actual, consumable piece of fruit. Why? Is it because I’m still relishing this weekend’s Apple Cup victory? Is it because I’m a proud Washingtonian, who will blindly defend the greatness of Pacific salmon, Duke’s clam chowder, Ezell’s fried chicken… and Washington’s world-famous apples? Is it because I miss writing so much due to the constraints of parenthood that I’m desperate? Or just because everyone’s asking what the new apple is like?

Not really, yes, definitely yes, and okay, sure. 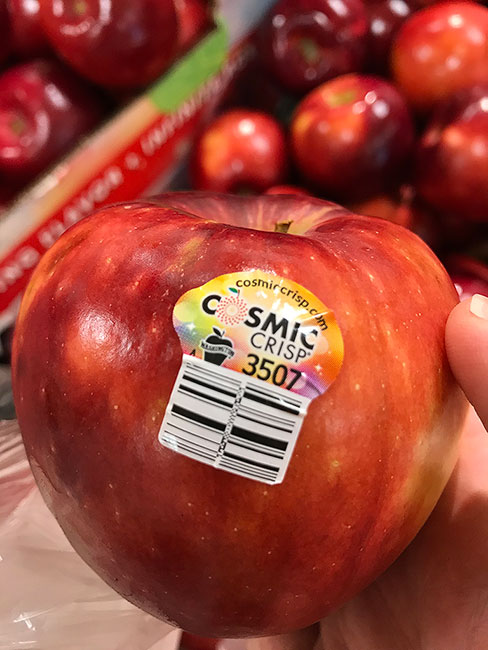 But this blog is supposed to be confined to photography-related news, gear and art reviews, etc., right? How does this relate to what I do? Hmm… Well, I have made sure to educate my European friends I meet on trips about the greatness of the Honeycrisp apple (usually whenever they show up with a bag of Red Delicious). And I make a point of stocking Honeycrisps for every Yellowstone tour I lead. So yeah… this is photo-related!

Anyway, there’s a new kid in town. The Honeycrisp has long been a favorite of mine, from the moment I realized it packs ten times the punch of a Fuji without being completely outlandish like a Granny Smith. Now, we have the Cosmic Crisp. Oh boy. For all of Washington’s renown as an apple producer, this is actually the first apple ever invented in the state. It certainly sounds heavenly, and rumors have been swirling about this amazing fruit for weeks. Today I finally saw it in local stores, so I had to try it.

In terms of looks, it’s quite appealing. The creators of this apple strain obviously wanted to return to classic red apple roots without having their creation confused with the Not-So-Delicious. But, as I remind myself in front of the mirror each morning, appearance doesn’t really matter as much as what’s inside.

I wasn’t really sure what I was expecting, flavor-wise. Okay, that’s not entirely true. I think I was anticipating even more tartness, since that’s what I love about the Honeycrisp. Surely this new apple would have even more bold flavor and acidity to it, with just enough lingering sweetness to keep it from GrannySmithdom.

Instead, it tasted… more benign. It had the same initial kick, but that instantly wore off and was replaced by sweetness. Which lingered… and lingered. Seriously, the flavor just hangs there. Regardless of the appeal, it’s an impressive feat of engineering.

If the Honeycrisp is smart and sassy, and the Granny Smith is downright pissed off (and the Red Delicious is more of a tired Mall Cop), the Cosmic Crisp is simply charming… with some underlying wit. For those who aren’t big on tart flavors, this may be the perfect apple. For those of us who like a little more kick, it may not unseat the Honeycrisp in the Apple Power Rankings.

Verdict: If you can get over the moral conundrum of supporting WSU with your Cosmic Crisp purchase, it’s definitely worth trying. You’ll quickly learn if you’re a Honeycrisp person or a Cosmic Crisp person. At the moment, they’re only $1.99/pound at the U Village QFC in Seattle, and are likely popping up elsewhere at low prices. I imagine the cost will go up once they gain a foothold in the public consciousness.