I’ve been looking forward to this trip for a few reasons. It’s been a couple years since my last winter visit to Yellowstone. Gone are the days when we’d make the trip out after Christmas each year (at least until our son is older). So now I only get out when I’m leading a tour, as I will be doing next week.

The holidays this year were insanely busy, so there’s probably no better place than lovely, snowy Silver Gate (our second home) and wintery Yellowstone to relax and enjoy some peace and quiet… even if I am working!

I was also excited to get back here, a little inspired even, after the success of the bison photo taken during my last winter trip to the park. In recent years I’ve approached my Yellowstone trips with a laid back, relaxed attitude. Nothing rushed, no pressure to produce. This time, while I am looking forward to the peace, I am also feeling a new sense of vigor, thinking about the possibilities in this stark, cold setting. In terms of moody environment, there’s no better time than winter to be here.

We’ll see how long that feeling lasts. Maybe I’ll ultimately find it more important to chill out a bit in the chill, at least until my tour starts.

Up until this week, I was planning on driving over from Seattle. Instead, I flew (with more and more direct flights being scheduled to Bozeman, it’s fairly easy to find affordable tickets even late). It took a bit of time to get my rental, grab a late lunch, and stock up on supplies, so by the time I reached the park it was getting dark.

My late winter arrivals are usually the same. Inevitably, I end up being the only one on the road heading east. It’s a ritual: watch for glowing eyes in the headlights, hoping it’s not an inky bison smack in the middle of the road… look for the scurrying of the fox or coyote using the pavement as an easier mode of transport… spot a tall gray shape that could be an owl but is just a clump of snow in a tree that will surely fool you again three more times on this trip… hope for the bobcat that once sat in the middle of the road one night many winters ago near Undine Falls, and left tracks there on another trip… remember to flip the high beams off in the rare instance another vehicle is driving back out of the park the other way… try not to be intimidated by the super wide snowmobile trailers that want to nudge you onto the soft shoulder…

I kept waiting for wildlife to appear on the edges of the little dome of light that preceded me on my drive through. For the longest time there was nothing. Not even a suicidal mouse or hare scurrying across the road. Furrows led to and from the road, signs of past travelers, but the drive remained quiet for a long time.

It wasn’t until I reached the Yellowstone River Bridge that an elk butt staggered away from the road into the darkness. In Little America, bison eyes glowed in the shadowy fields left and right of the road. All pretty far from the pavement, but close enough to give me pause in case someone ahead was deciding to cross. Part-way through the Lamar, just as I was remembering a recent cabin guest’s story of a night-time drive through the valley that featured a vanguard of wolves, I spied a canid on the dim road ahead. Scurrying, not loping… there was one of the coyotes I was expecting.

Approaching the northeast entrance, thing got prettier, if that’s possible. Snow was falling, tiny crystals lighting up in the headlights. The snow was thicker along the road, and driving grew a bit more treacherous. But finally, I arrived… Silver Gate and home.

I drove out as it was starting to get light. There was a bit of fresh snow on the ground, but the plow had already come through at least once.

It was a leisurely pace initially. I didn’t spot any foxes or otters. Plenty of bison though. A moose was grazing on willows at the Confluence. I kept going. In the Lamar Canyon, I stopped to check for otter sign below (something I always do in winter). No dice, though there were plenty of smaller canid tracks. When I returned to the car, I spied a lone waxwing perched high atop a tree before it zoomed away.

By the way, Bison and Raven had the lowest odds in the What Will Max Photograph First? pool. And those were the first two things I photographed… 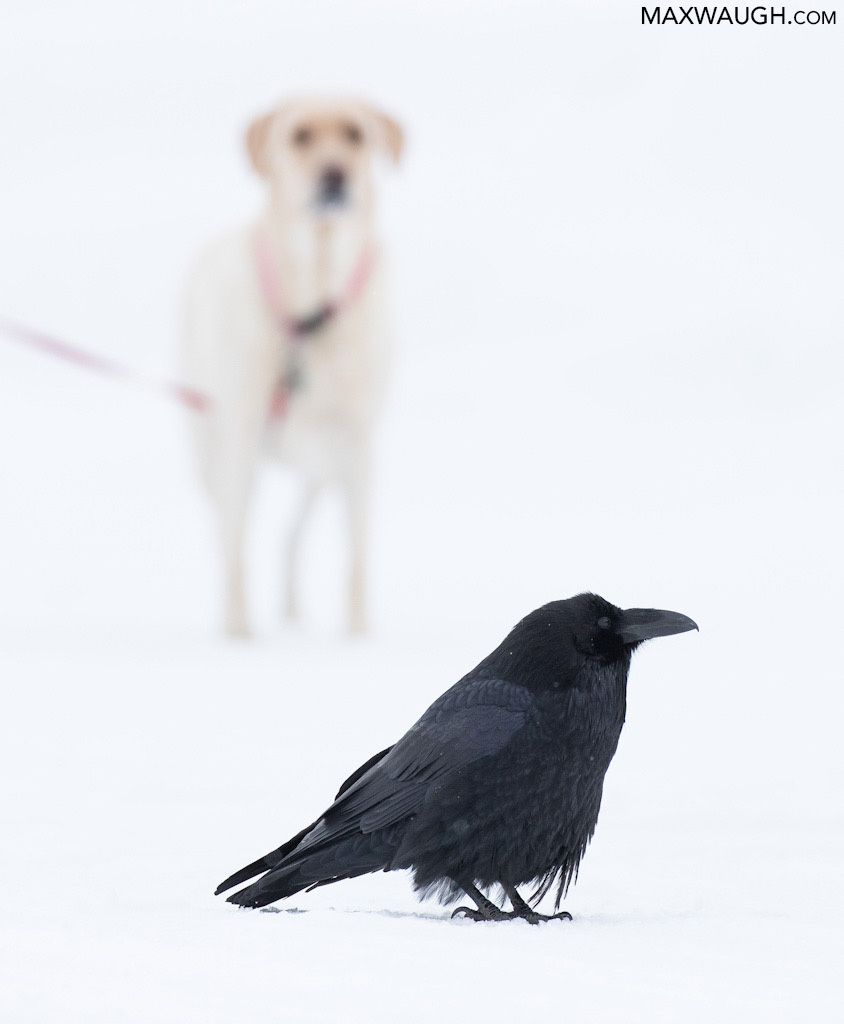 A small gathering had formed near Floating Island Lake for a coyote napping atop a boulder. I snapped a few shots and paused to chat with some photographers I knew. They mentioned there was a carcass near the road farther to the west. None of us expected much action there at this point in the morning, so we lazily returned to our vehicles.

As we were getting gear in the car… BOOM! Down went a tripod, lens and camera. Not mine. This is the second straight Yellowstone visit during which a Nikon photographer I know lost their rig to a pullout’s gravitational pull. So you Nikon shooters may want to avoid me these next two weeks (Hmm… not sure what my clients will do).

I chose to leave one grisly scene for another. I headed west to check out the reported carcass. Someone was photographing a coyote up on the southern hill, but as I continued I saw that a small group of scopers were looking in the other direction. Looking back, I spied a black shape. Uh oh… the wolves were out!

”Uh oh” because I had to find parking. The one small pullout was fully occupied, so I had to drive farther down to find room to safely park off the road. Thankfully, by the time I parked, geared up, and slogged back to the gathering of onlookers, there was still plenty of action.

The wolves were scattered a bit, but several of them were taking turns going down into a draw to feed or grab some scraps. There was a little room to photograph some of them out in the open. This was a rather nice way to start a Yellowstone trip! 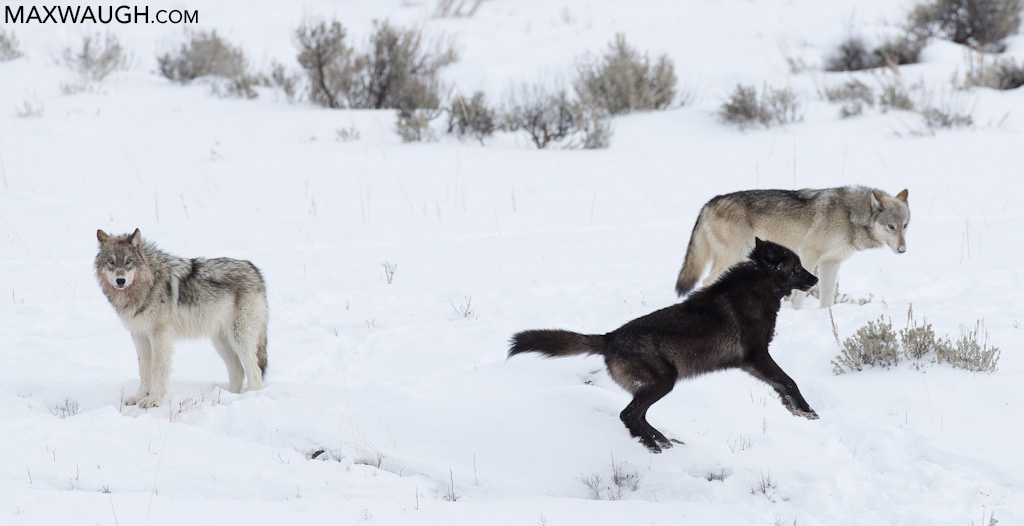 I came away with a number of shots of black and grays, which would occasionally chase off (or jump after) ravens. Things were going peachy until the rangers made the decision to move the carcass. They stopped just above the carcass and the closest wolves bolted. Soon the pack (or at least, a large portion of it) was marching away up the far hill. I counted at least a dozen. On a couple return trips, I saw that some loners were still lingering, hoping there was still food around, but they too disappeared up and over the hill.

Since today was apparently the 25th anniversary of the wolf reintroduction in Yellowstone, I suppose it’s fitting that I had one of my best encounters with a large pack.

The rest of the morning (which was quite nice, by the way) was spent wandering back and forth. There were a couple more distant coyotes here and there. I couldn’t help myself, stopping to photograph ravens again, and on my way back to the northeast I even stopped for dippers!

I returned to Silver Gate a bit early and decided I should tromp out and explore our property a bit. I didn’t get far, as a small moose stood up and stared me down from the trees. 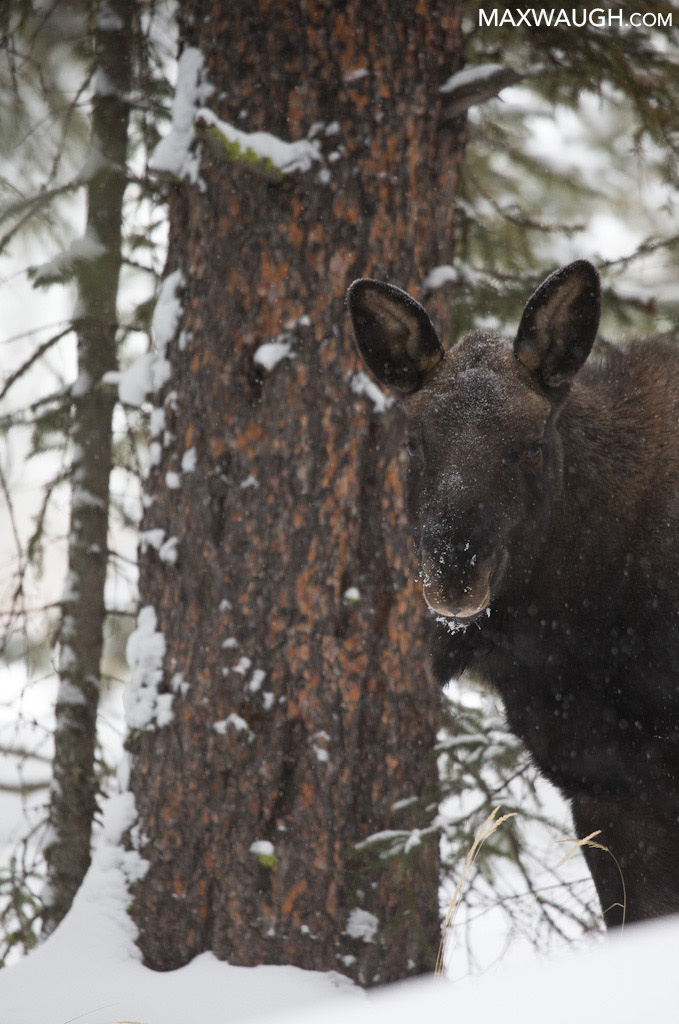 Its mother sat in the background, unperturbed. The snow and cloud cover had moved in at this point of the afternoon, so it was a good time to call it a day.