I tried to get out the door a little earlier Monday morning, in the off chance the wolves had returned or were lingering near the kill site.

I didn’t make good time though, as I kept stopping for random things. Actually, most of the stops were bison-related, wider photos of the winter landscape. 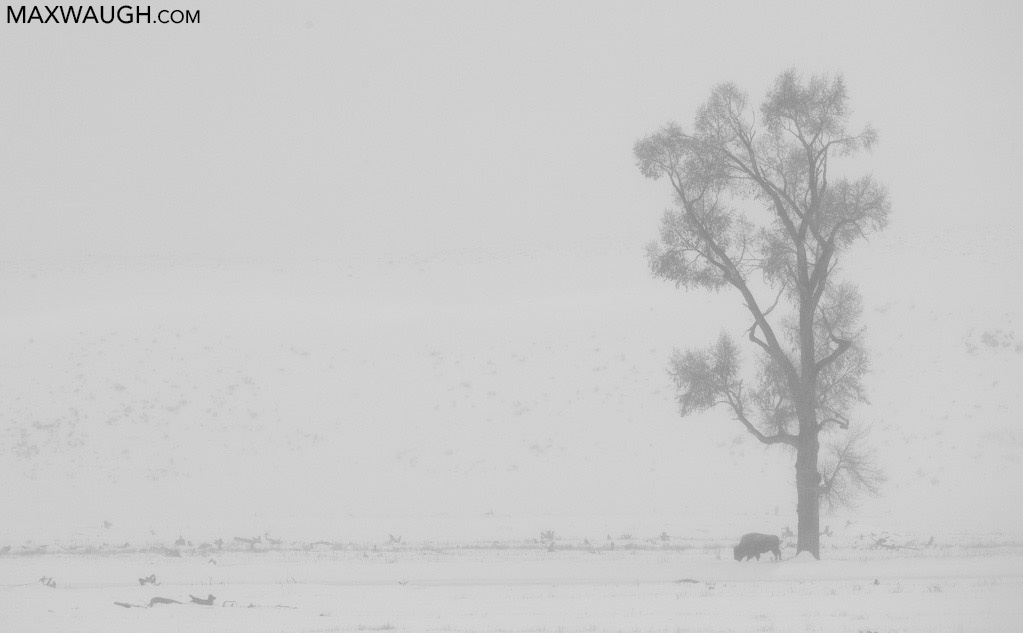 The east end of the Lamar Valley was gray and blustery. At one point it was a virtual whiteout on the road due to the snow blowing off the nearby plains. That quickly cleared, and by the time I reached the west end of the valley the sun was about to unleash its blazing light through the clouds.

I stopped again in Little America for another bisonscape. All told, it took me two hours to reach the site of Sunday’s wolf action. Not surprisingly, there was nothing going on. I had already passed wolf watchers scoping far to the north, and later spotted tracks where the pack had passed eastward during the night.

Back near Roosevelt, I spied a coyote high atop the hill, perching on a boulder in the sunlight. It took a while to find a place to safely pull over, and by the time I trudged back up the hill and slogged even higher up through the snow (in hopes of landing a remote opportunity of lining up the coyote and the setting moon), my target was long gone up on the far ridge. 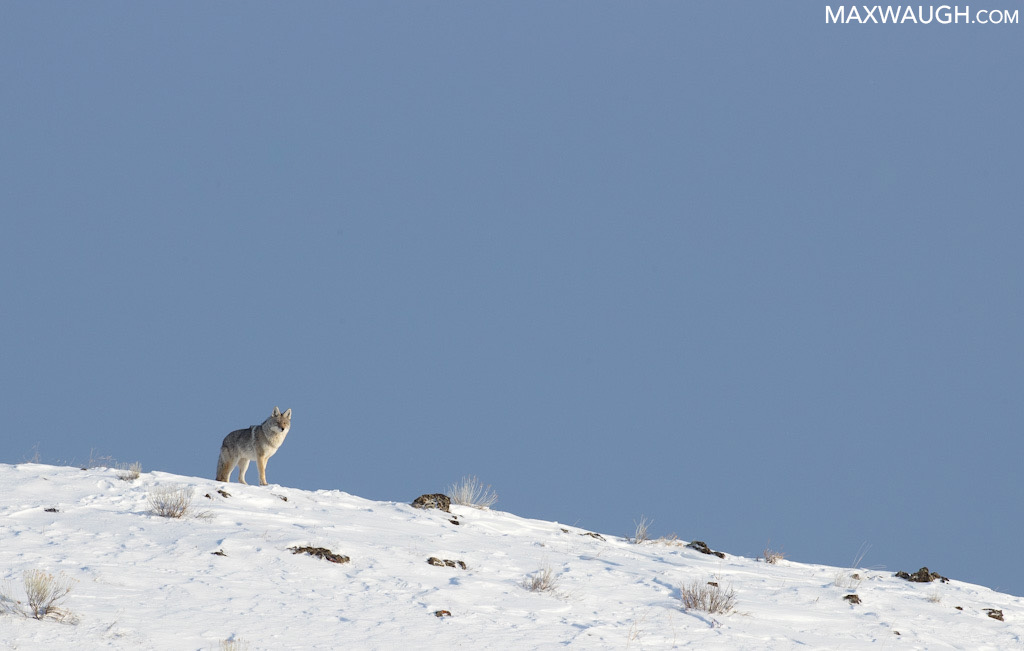 I drove all the way back to Round Prairie for lunch. A short ways up the hill, a moose cow and calf rested in the trees. I parked at the Pebble Creek lot and kept an eye on the surrounding meadow in case an ermine or something else interesting decided to pop up. By this time I was intending to hike back to the small canyon along the creek, which I had not visited in a couple years.

Before I got the opportunity, some friends pulled up to say hi. While we were catching up, another car pulled up, and some people piled out to go snowshoeing in the general direction I had planned to go.

So I cancelled my intended exploration, and instead drove back to the west to search for more wildlife. Which turned out to be just fine. Approaching the Confluence, I slowed to check out a dipper, squatting a bit oddly on the ice in the middle of the creek. And that’s when I saw a grayish, furry head popping out of the water. Otters!

There were two, and they were on the move, so I drove down toward the next pullout. I cursed my luck, however, because the entire lot was full thanks to some bighorn rams that had come down near the road. Fortunately, my friends were there, and they made some room for me. I alerted everyone of impending otters. 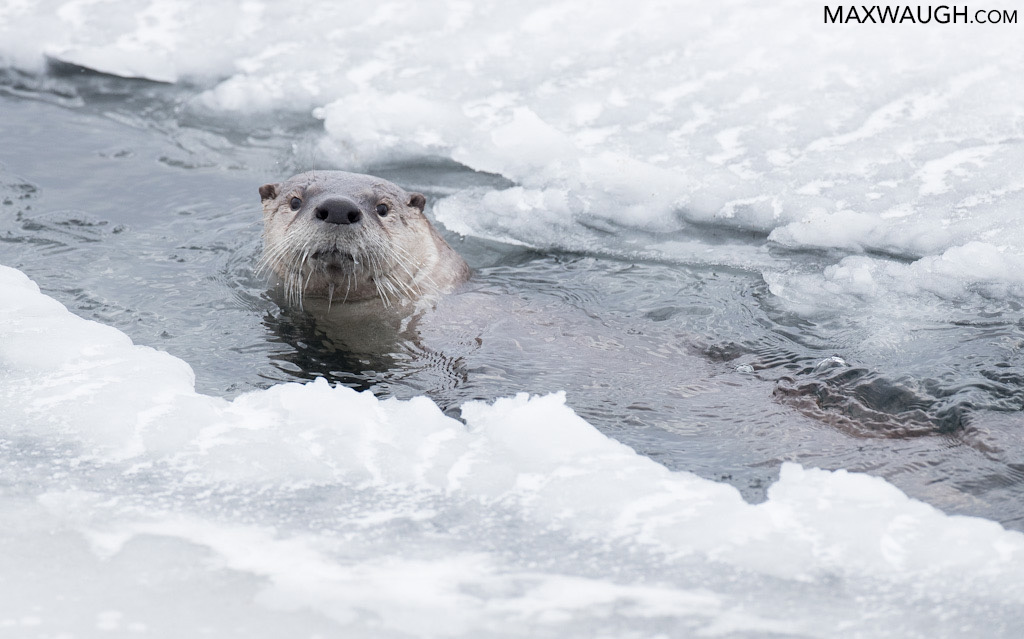 We all got a good hour of shooting with them, my best otter encounter in a few years (though we saw them during my 2016 winter tours, the sightings were fleeting). The pair spent a fair amount of time searching for food under the ice, taking turns on the surface to crunch their tiny meals (maybe snails).

It also gave me a rare chance to shoot some wider otter shots. Normally, one wants to hone in on the cute faces and fun antics of these characters, but this was a rare chance to get a bit of the Lamar Valley in the background. 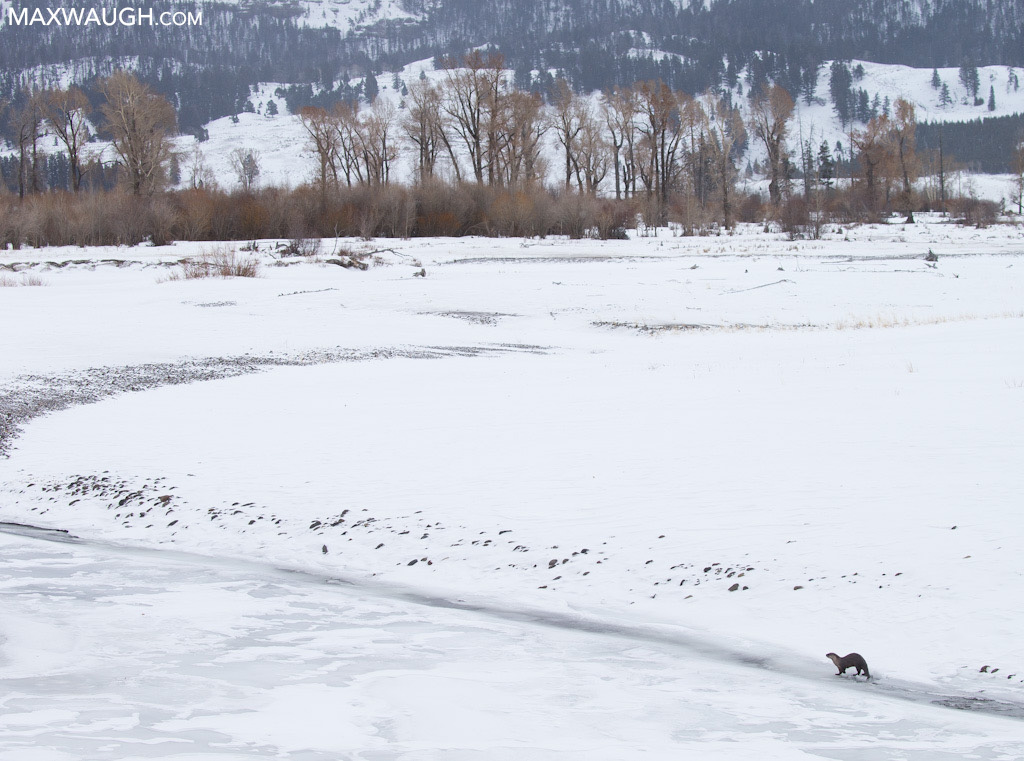 Finally, one of the otters caught a fish. A tiny fish. Once it downed that, they were off. Rather than swim up or downstream, they disappeared under the ice, reappearing several minutes later in the distance along the Lamar River.

The remainder of the day was fairly quiet, as I drove back to the west one more time before returning to Silver Gate. Another good day. Two for two so far!

A nice layer of fresh powder blanketed my car this morning, and more was coming down. It was still dark when I left, thanks to an unintended 4am wake-up time today. I took care of some work until 7am or so, at which point I geared up and headed out.

By the time I reached the east finger of the Lamar it was light enough for spotting, at least. Some bull moose grazed on willows in the flats far out to my left. Coming around the bend past Soda Butte I spied a small tour bus letting its passengers out in the road. I pulled up slowly and asked what they had in their sights.

Whaddya know, more wolves. Much farther than the pack the other day, but certainly not in Dot Range. I paused to watch for clues as to their movement. Unfortunately, they appeared to be heading uphill away from the road. But when I looked back to the east and down a bit closer to the road, I saw a smattering of scavenging birds. Ah, a carcass.

I spent the next two-plus hours circling, waiting, and watching. I saw at least four, someone else mentioned seeing five, but there may well have been more. As I backtracked at one point, a herd of bison came rumbling down the snowy slope above, from the direction of the presumed carcass. 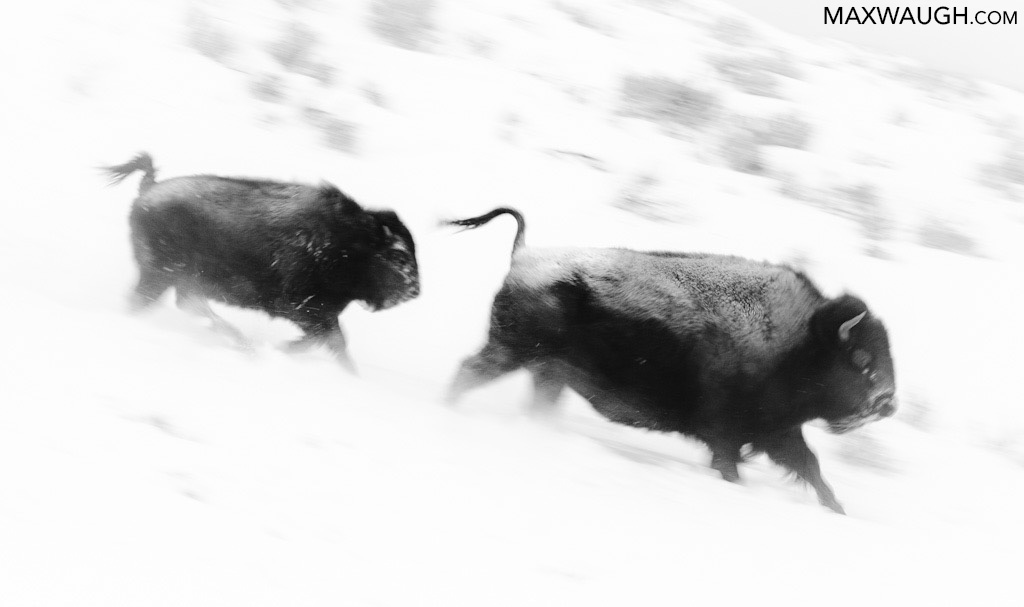 The carcass was actually quite close to and just above the road, but due to the topography, it was completely out of sight no matter where one stood. So it felt more like playing the lottery, hoping a wolf might venture onto a nearer hillside out of curiosity (or perhaps to chase off some ravens and magpies). Fortunately, that actually happened for me once, while I was parked at Soda Butte. 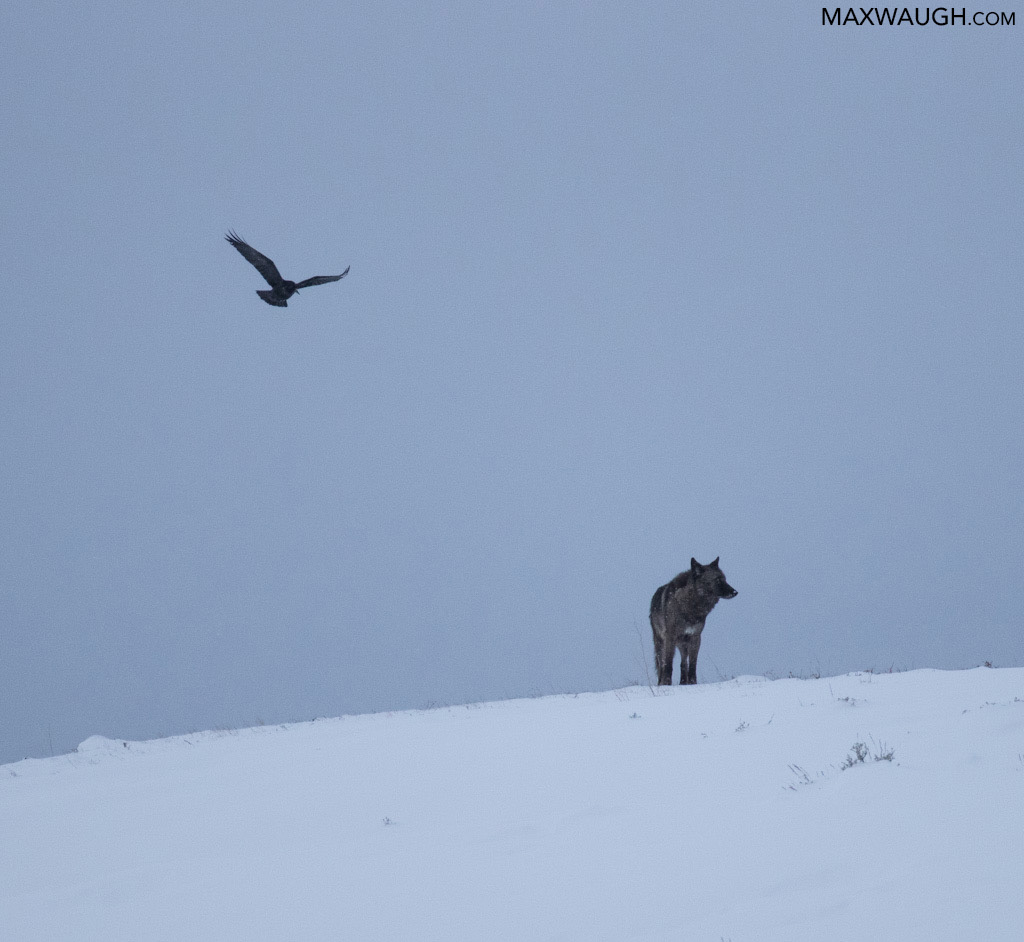 That was my best view the entire morning. While I waited at the Soda Butte pullout, both Bald and Golden Eagles flew overhead. Ravens chased each other. Magpies flew off with chunks of flesh. And a coyote or two wandered by out in the flats.

Eventually, a red fox appeared on the northern hill. Forget about your Three Dog Day… I had a Three Dog Pullout.

I knew it was a real long shot to get any more “close” sightings. The wolves had mainly retreated up the hill in the opposite direction. An occasional driver would get lucky, as I saw the odd car stop in the road just below the carcass, lenses popping out of windows. But from the pullout we never got another view.

When I finally packed up to head back west, the Footbridge pullout was packed with scopes and big lenses. By this point, the wolves were even farther up the hill. It was time to move on.

The rest of the day was largely uneventful. I made it all the way to Gardiner for lunch with friends and to take care of some business. It was blustery and snowy much of the way, even in town, but the moment I re-entered the park everything cleared up.

By this time, my early start to the day was catching up to me, and I had to pull over for a quick nap. Thirteen minutes later, I was back on the road. The storm had come back in, but as I cruised east the sun was doing its best to shine one last time.

I did stop for a raven. Because of course I did. 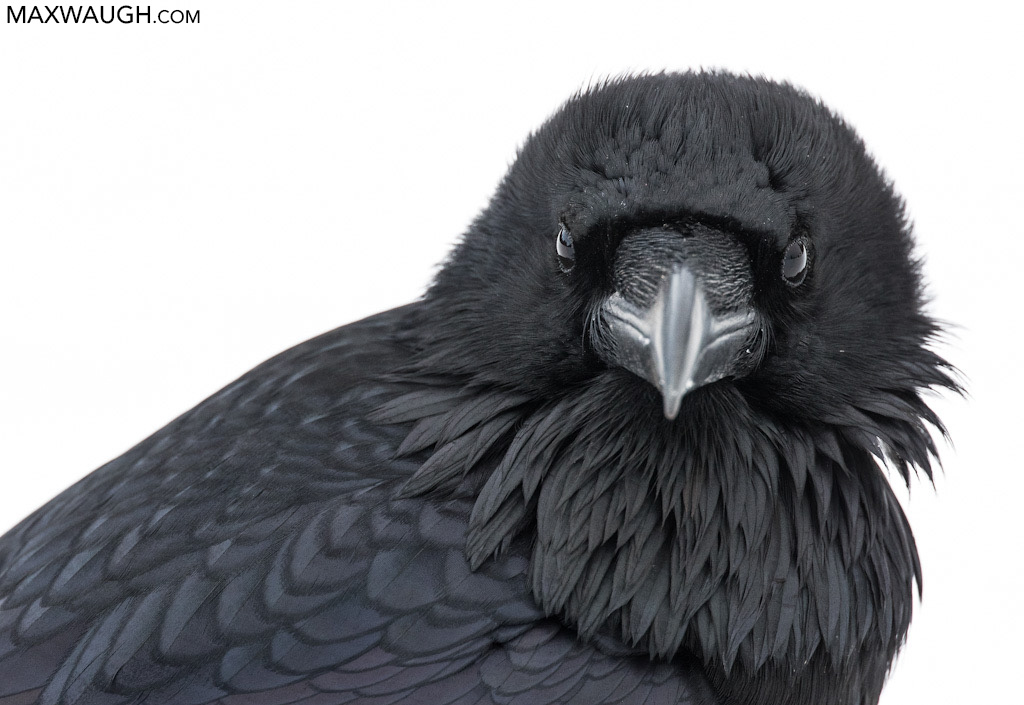 Onward. The sun finally broke through, bathing Little America in a soft golden haze. Sadly, it seems like every time I’ve had some nice light these first few days, there isn’t an animal to be seen.

Even as I entered the home stretch in the gloomy northeast, I could see the colorful flare of backlit clouds reflecting off the sides and back of my car. The Lamar was probably a lovely setting by then, but I was already too far gone to turn back and catch the light.