It was a struggle getting out of bed on Wednesday. I still hadn’t made up for the too-early wakeup time the previous morning, and it seems like I’m fighting off a cold each morning on this trip. But I forced myself into action. Slow action, but still…

This was the first time I didn’t have any fresh snow on the car in the morning… maybe because it was by far the coldest morning too. Single digits when I drove in, and by the time I was cruising the eastern Lamar, it dropped to -8(F). These frigid mornings can be quite beautiful, with pinks and blues dancing behind the frosted mountain peaks, the tops of which ignite in a white flame as the sun starts to hit them.

Since I was a bit late getting in, I missed out on the parking spots at Soda Butte (wolves had been peeking over the hill), so I cruised for a bit. Aside from the wolves and more coyotes, Tuesday’s bull moose were off in the distant trees, sparring. A bit far and never quite in the open enough to land any photos. The local herd of bison cows and calves decided to parade down the road for a bit as well. 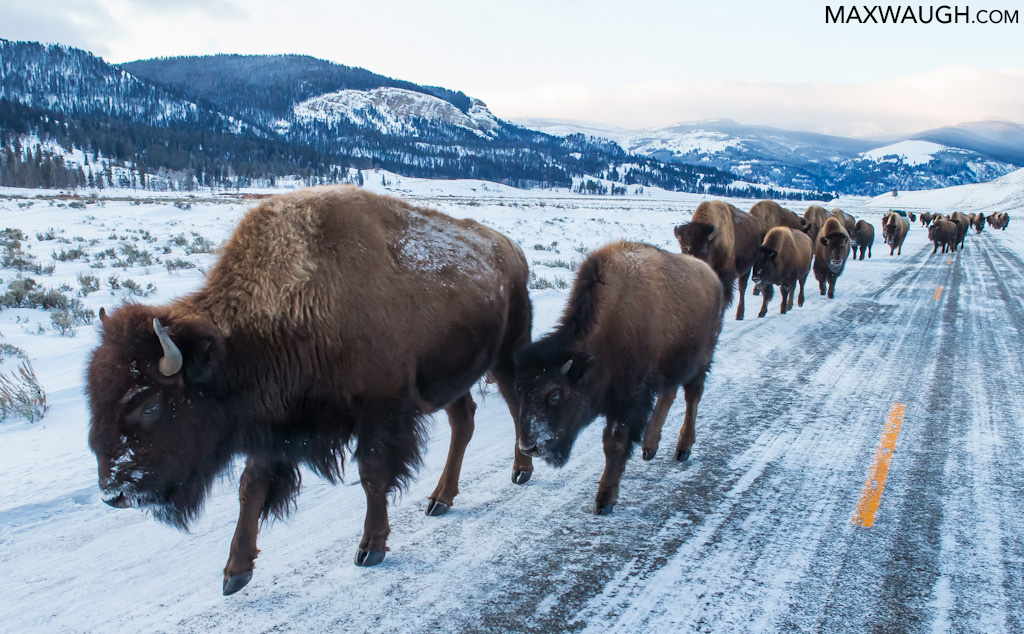 While I was pulled over waiting for something—anything!—to unfold, a friend happened to pull up behind me, so we got to chatting. Some other folks joined us in the pullout, and that’s when I heard mention of an ermine sighting way on the other side of the Lamar. A long shot, but still worth a go, since those little critters will sometimes stick to one area for a few hours at a time.

A total bust, but my friend mentioned that she had seen an ermine a couple days ago elsewhere, and followed that up with fresh tracks a day later. So we went to check out that spot. No ermine, but after saying goodbye, I opted to stake it out for a bit. I waded downhill from the parking lot a short ways to see where the freshest tracks went. A bison grazed in a meadow far below. A woodpecker flew from tree to tree in the distance. Three white-tailed deer bounced down the snowy slope. Such a lovely, peaceful spot to hang out.

Car doors opened and closed in the lot above, and a cacophony ensued as a family emerged to snap group photos and selfies and other pictures. I assume they were family, because they all talked the same way (Loudly). You only have one thought in moments like this:

I haven’t used the word “yammering” in a sentence in a long time.

They eventually departed, with a double toot of the car horn for good measure. Just in case the peace and tranquility was only cracked, but not yet completely shattered, I guess.

After an hour of waiting, I decided to pack it in. Driving back to the east, I passed the noisy bunch. They had only made it two pullouts before getting out to take more pictures of each other. At this rate, they’d make it to Silver Gate by Sunday (right on time… I leave Saturday).

I found a spot to have lunch and call home. Twenty minutes later, the party bus rolled in behind me.

When it was finally time to explore again, I drove all the way through to Round Prairie. It had warmed up a fair bit by this point (back to the teens we’ve grown accustomed to), but there wasn’t a whole lot to photograph. I stopped for bison here and there, but it wasn’t until the end of the eastward stretch when I finally spied something a bit more unique. In Round Prairie there were two different foxes out hunting. Sadly, they were way out beyond the willows, but I did watch for a bit as one of them moused in the snow.

Backtracking westward, it remained quiet but for the bison. I ran into more friends, and after they reported little to no activity to the west, I decided to turn around.

Driving through the Lamar, streaks of sunlight shone across the floor of the valley. I pulled over to snap a couple quick photos, since a bison herd was momentarily in the spotlight. 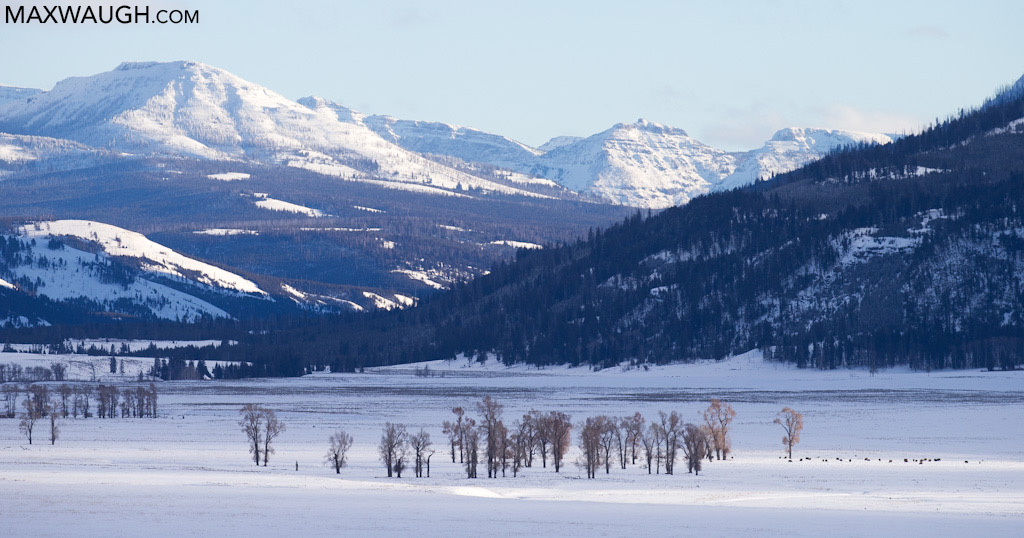 My friend pulled in behind, and we somehow got on the topic of European badgers. Then we hopped back in our cars and almost immediately ended up behind a vehicle parked in the road. People were pointing lenses not at the bison on the valley floor, but at the opposite hillside above.

Coyote or fox, I assumed. Since I wasn’t going anywhere, I got my lens ready. Finally, I spied movement in the sage. It was a darker brown than I was expecting. Not exactly coyote-colored. And why couldn’t I see it above the sage…? 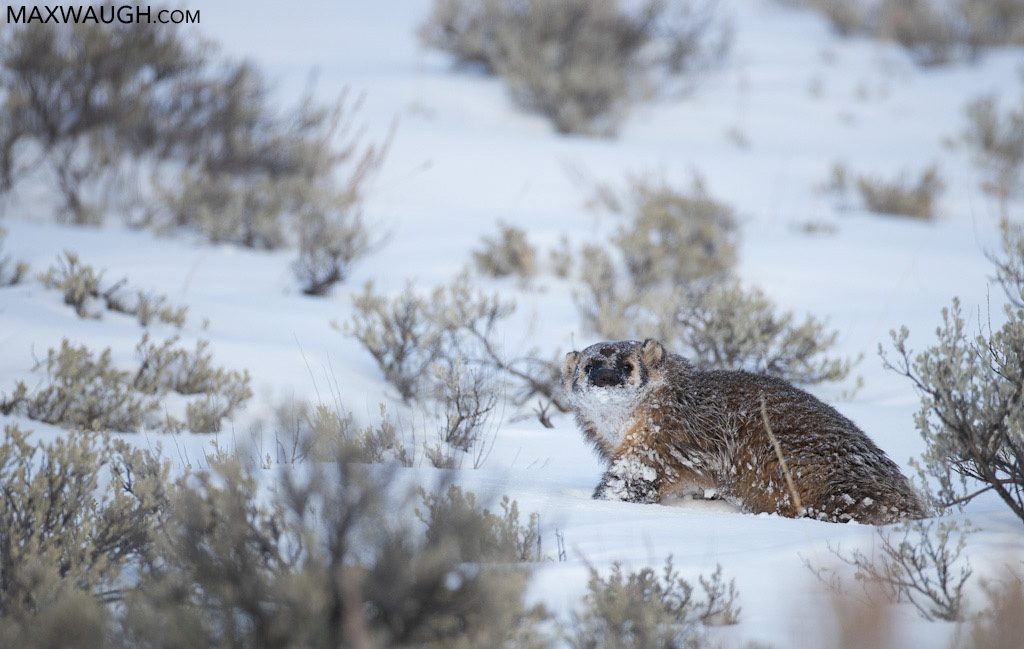 Speaking of badgers… This was actually the first winter badger I’ve ever seen. Sightings are fairly uncommon at this time of year, and after watching it for a bit I could tell why. The badger was struggling to move through the snow. It was laboring almost as much as I did coming back uphill from my ermine stakeout. When you’re flat and have short, stubby legs, wading through snow is anything but easy.

The vehicles finally moved, but I didn’t want to let this rare opportunity go, so we drove down to the next pullout and turned around. Though it had been moving uphill and away from the road, I tracked it down again, and we were able to watch as it slogged across the hillside. Eventually it did begin digging, and disappeared beneath the snow into what may have been its den for the night.

What was looking like the first slowish day of the trip ended with another great sighting (and what may end up being the encounter of the trip for me).

Back in Round Prairie, one of the foxes was still hunting in the distance. Maybe they could choose to hunt the other half of the big meadow for breakfast? That would be nice.

It remained cold. Zero degrees when I left, and yet it felt colder throughout much of the morning than yesterday’s negative temps, thanks to the wind.

When I arrived in the Lamar Valley (a bit earlier than yesterday), there were already several vehicles cruising the road. A fox hunted in the flats as I drove past. At Soda Butte, a gentleman indicated there was a black wolf that made a brief appearance earlier, but all had been quiet since. A coyote moused in the field behind the cone. I did spot two wolves on a higher ridge as I drove away. Three Dog Day again.

Today was a day of constant mustelid searches, from looking out for otters at the Confluence, to checking the badger hole I had left the previous evening, to revisiting the ermine spot from Wednesday. In between, an occasional stop for ravens, coyotes, or bison, but for the most part I came up empty.

A few days prior, I picked the wrong pump there and got only a trickle. This time, every pump was slow. How slow? Slower than a summer bison jam slow. We’re talking eighty-year-old-man-in-the-middle-of-the-night type flow.

And of course, the pump handles don’t have those locks so you can start pumping and walk away. Instead, they invite you to enjoy the stench while you wait.

I tried every pump I could, and filled a half tank in 20 minutes. On the plus side, I now had enough gas to get me to the Mammoth Clinic to get treated for all the toxic fumes I inhaled.

Toward the end of the day, I found myself in Round Prairie (same fox still hunting way out), and figured there was one more opportunity to backtrack and visit the badger site, which would put me there right around the time we saw it yesterday.

After pulling in and scoping the hillside for a few minutes, I was ready to head out, but got to talking with a friend. Afterward, it was finally time to wrap things up. I opened my door, looked up at the hill one more time… and saw a small dark shape peeking out of the snow.

The badger had emerged, right on schedule. It waited for some time, keeping an eye on us and its surroundings (tracks indicated that coyotes had investigated during the night, which may have been the cause for caution). We waited it out. A badger probably isn’t going to pop out of its sett in winter unless it has serious intention to move.

And finally, it departed. We couldn’t be sure which way it would go, but after crossing the hill a short ways it turned toward us and started tromping downhill. 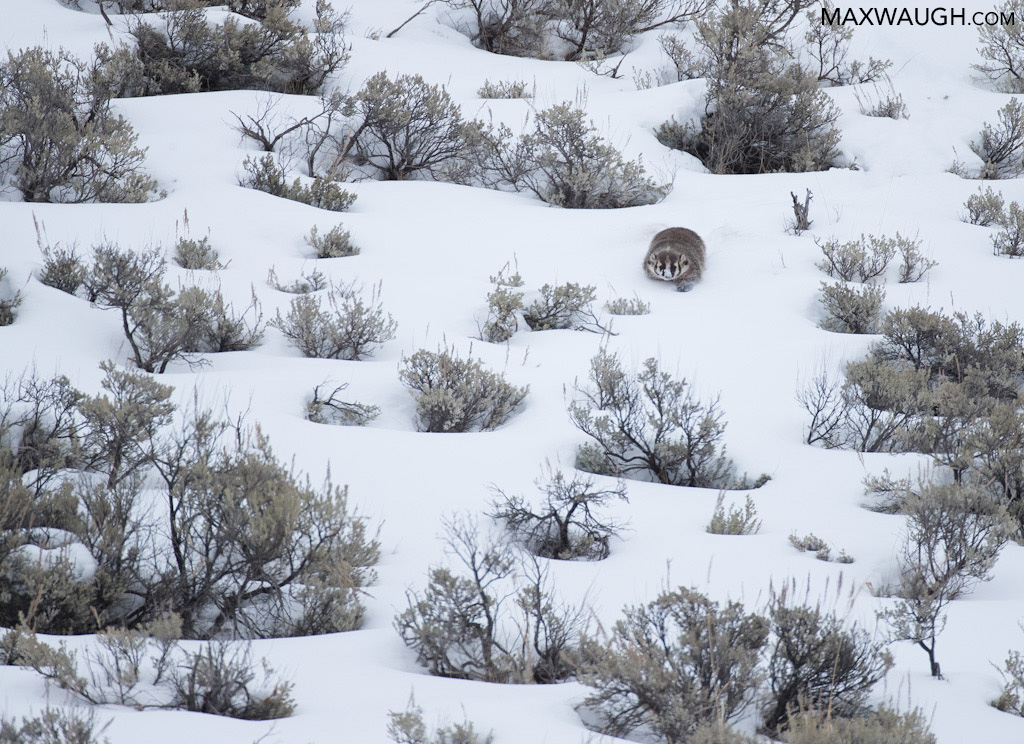 It was still a distance away, but ultimately it shaved at least a third of the distance to us before it dove into the snow and began digging. And digging. And digging. First white snow was flying, then dirt. What was a clean badger was coated in soil by the time it finally disappeared into its new sleeping quarters. Same time tomorrow?