There’s nothing much to report from Saturday, since it was my client pick-up day, but I did stop at Tower to watch the Wapiti Pack for a few minutes. 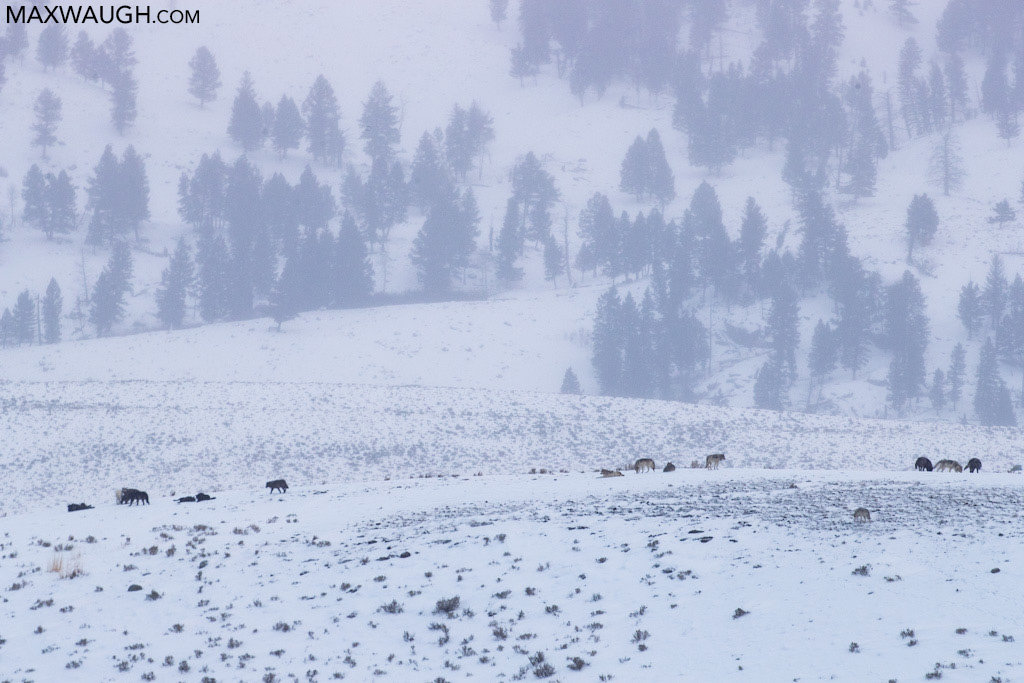 Even from a distance, the sight of so many wolves hanging out together like that remains special.

I made it up to Bozeman, collected my group, and we drove south to West Yellowstone, where we’d start my tour with three days of exploration in the park interior.

Our first official day of exploration began in the morning darkness, as we were one of the first snow coaches to drive through the West Entrance. Our goal (and, honestly, the main reason we stay in West for this leg of the tour) was to find the Madison River bobcat. It’s something I’ve never had any luck with. Whenever I come down, I’m usually a week early or a week late.

The cat was seen again recently, so maybe this is the year. Probably not, but by golly, we’re going to try!

And we did try hard Sunday morning. We scoured a good portion of the river both in the morning and in the afternoon, but didn’t see any fresh sign of the cat. However, we did have a lovely sunrise on the river, and took advantage of the dramatic morning scenery to photograph some swans. 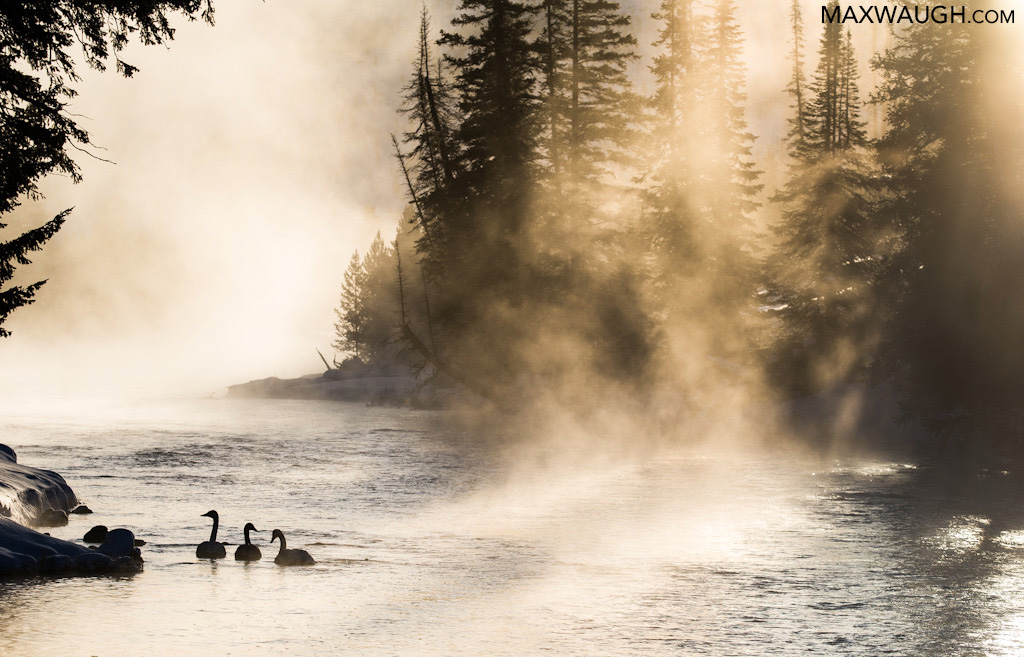 Swans, bison, and a couple of muskrats, as well as some ducks (Ring-necked Duck!), mergansers, Mountain Chickadees, and geese. Oh, and a distant coyote. That was the extent of the wildlife on this first tour day.

But it was still a very good day. We headed north from Madison Junction, stopped for a quick lunch near Gibbon Meadows, and then pulled over briefly to photograph the Chocolate Pot. Which had a bonus bison.

The bison was actually grazing off to the side, where it looked like he’d been feeding the last three days. But we kept urging him to walk across the top of the thermal feature… and he did! 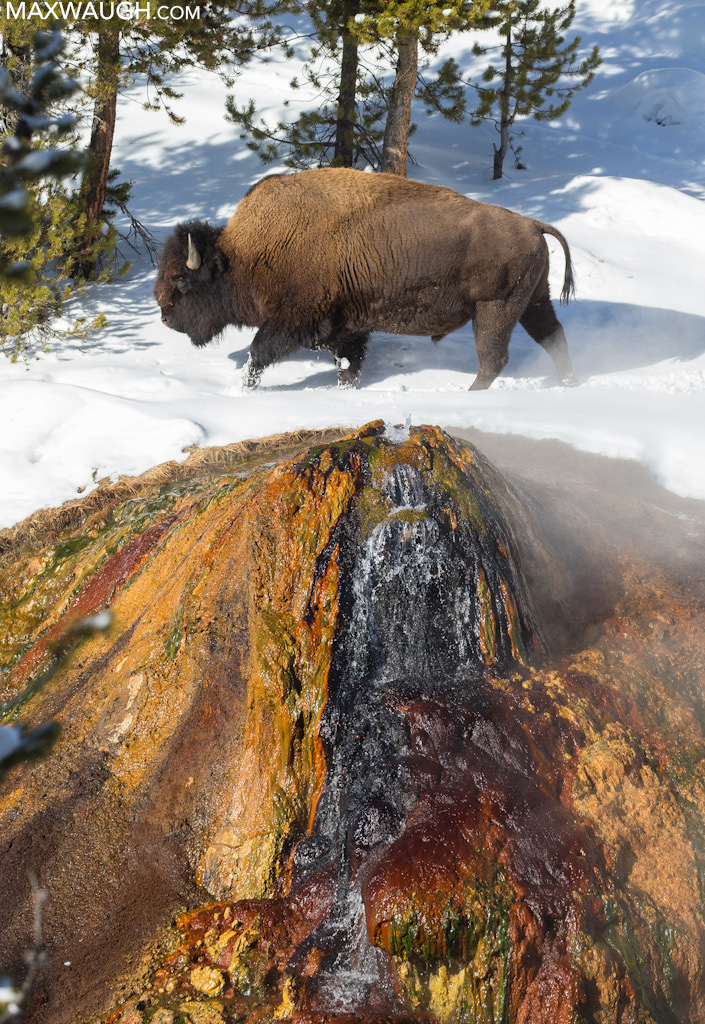 I’ve photographed otters swimming along the bottom of this feature, so it was cool getting something (bigger) on top. Not quite as good as the grizzly bear someone got there many years ago, but this was still a treat.

We continued north to Norris Geyser Basin. Winter’s about the only time I’d want to venture there (unless you told me Steamboat Geyser was going to erupt). Normally, I find it to be one of the least appealing major thermal areas… but in winter it’s magical. Billowing clouds of steam, ghost trees, bright green thermophilic algae… on a sunny day like we had, it was a wonderful place to shoot some landscape photos. Yes, I said it.

But really, if I do more than an hour of landscape photography I’ll have a nervous breakdown, so we had to go.

We returned to the Madison for one final canvassing of the area. Checking more tracks, and stopping for the occasional bison or bird, we used up the remaining daylight quickly.

We were back on the Madison nice and early on our second day in the interior. Bobcat searches yielded little, though we did discover where a coyote had landed a swan some time in the night and dragged it across the road into the trees.

While we’re down here, we’ve invited my friend and colleague Zack Clothier to join us. Zack is in between tours, so we’ve inherited an extra set of eyes with good tracking skills. And if you’re imagining Zack knocking on my door like a lonesome waif, begging for food and shelter in exchange for his spotting and tracking contributions… yes, that’s pretty much how it played out.

Combined with our coach driver Adam Brubaker, also an experienced guide and photographer, we’ve got an all star team working for my clients at the moment. But I guess that’s all talk unless we can actually find some wildlife for people to photograph!

It initially started a bit quiet, with a frosty Bald Eagle providing the only photo op along the river in the morning. After two passes, we moved on and headed north and east to explore new territory.

It was finally time to get into Hayden Valley, and it was a beautiful day for it. We made stops along the way to look for otters, and photographed one of the many Trumpeter Swans while it preened near the snowy banks of the Yellowstone River, all with a subtle mist rising from the water.

Our initial drive through the valley was obscured by a low fog, which wasn’t so dense as to make photo ops impossible, but it did prevent any distant viewing (as we learned later). A close animal in the haze would’ve actually made for some nice moody photos, but that wasn’t to be.

The southern half of the valley cleared up, and we were soon seeing ermine tracks everywhere. Then two coyotes, and a distant fox (our first of the tour). We made it all the way down to LeHardy Rapids—currently a half-frozen Dipper playground—before turning back north. The fox had been chased off by one of the coyotes, but back in the northern part of the valley we finally got to see what the earlier fog was hiding. We spotted another fox out in the snow, a fair ways from the road. 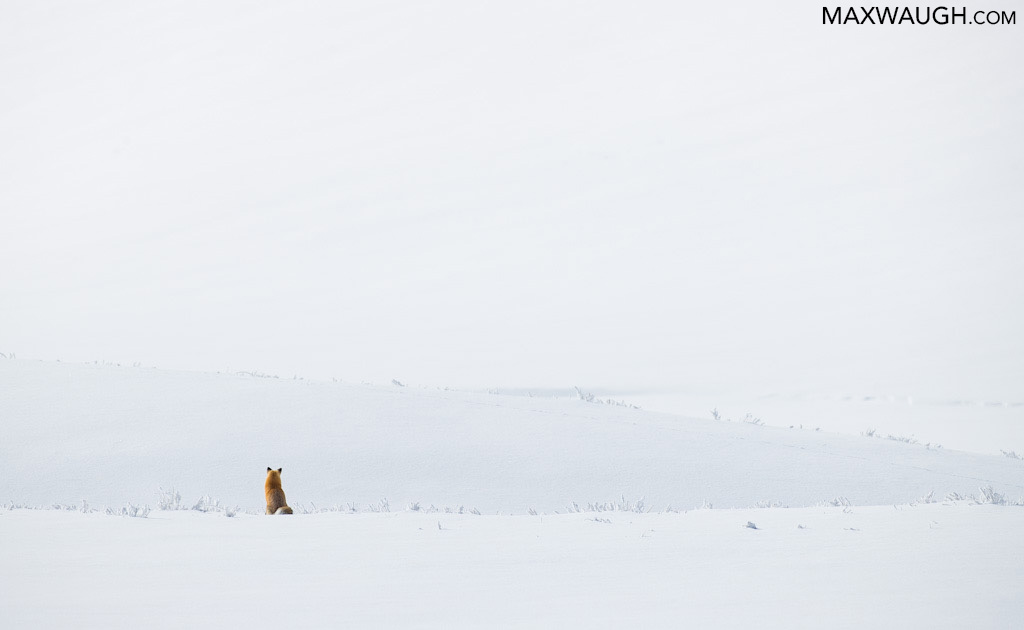 It was wise to wait and see where it would go as it patrolled and listened for prey, and though there was some initial uncertainty, we soon saw it turn and choose a tangent that would take it slightly closer to the road. We had to move as well, and soon we were hiking not just up the road, but up through initially deep snow onto a windswept hillside where the snow was relatively shallow.

At the top we were able to get set up just in time for the fox to pass fairly close as it snooped around. Everyone was afforded their first good fox views before it continued on, following a set of old tracks in what seemed like a traditional route.

Not far to the south, just downhill from Grizzly Overlook, a coyote (probably one of the previous pair) was out between the road and the river. As we piled out, it honed in on something… a clump of what was either sage or an old hide. It was hard to tell from our distance, but the coyote was definitely in stalking mode, so something was shuffling around underneath.

It crept closer and closer, until… 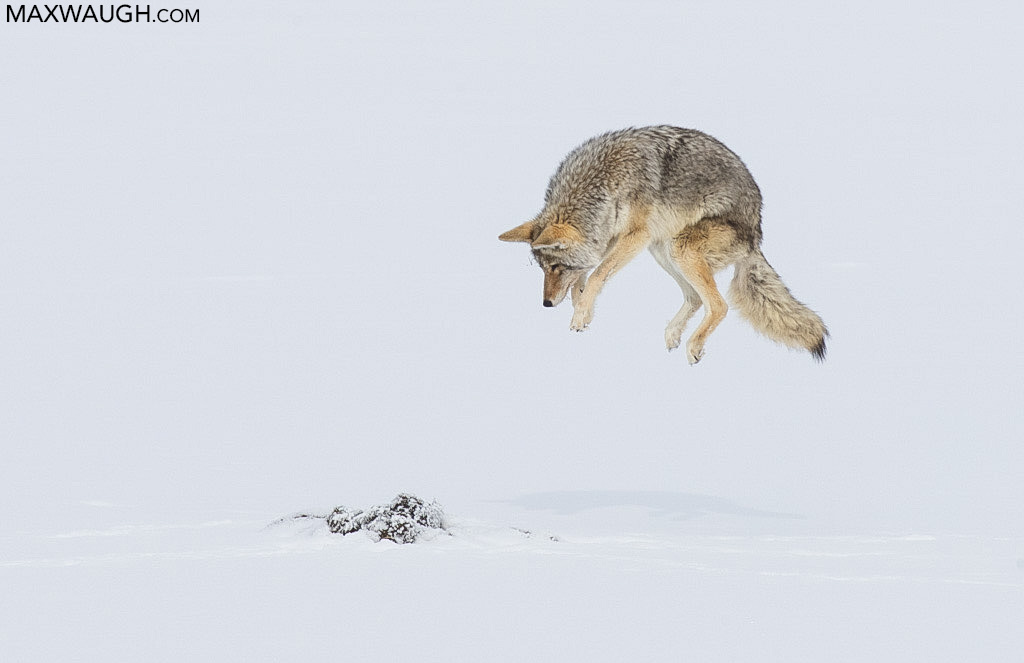 A pretty impressive leap for a coyote, practically fox-like. All for naught, however. It dug a bit more, but its meal had escaped. Soon it moved on. As did we. One final pass south yielded no other meaningful sightings, so we began to trek north on our way out.

Back at our fox spot, we spied two foxes to the west, and another to the east, all far out. And back near Norris Junction, there was one more fox sleeping out in the meadow. We counted six foxes for the day.

At this point we were pretty happy, but the action wasn’t quite over. Just beyond Madison Junction, a large herd of bison foraged close to the river, and just beyond them, two coyotes patrolled the shoreline. We stopped to wait out the coyotes, but one of them swam and waded across the Madison River. The other eventually came our way, reluctant to take a dip.

The coyote passed quite close, with bison in the background on the opposite shore. Then out of nowhere a Bald Eagle swooped in scoping for fish in the river. Then the bison began crossing the river. Where to look?!

The eagle swooped in again, circling and eventually landing along the riverbank. A bit of Americana, stuffed in a single frame. 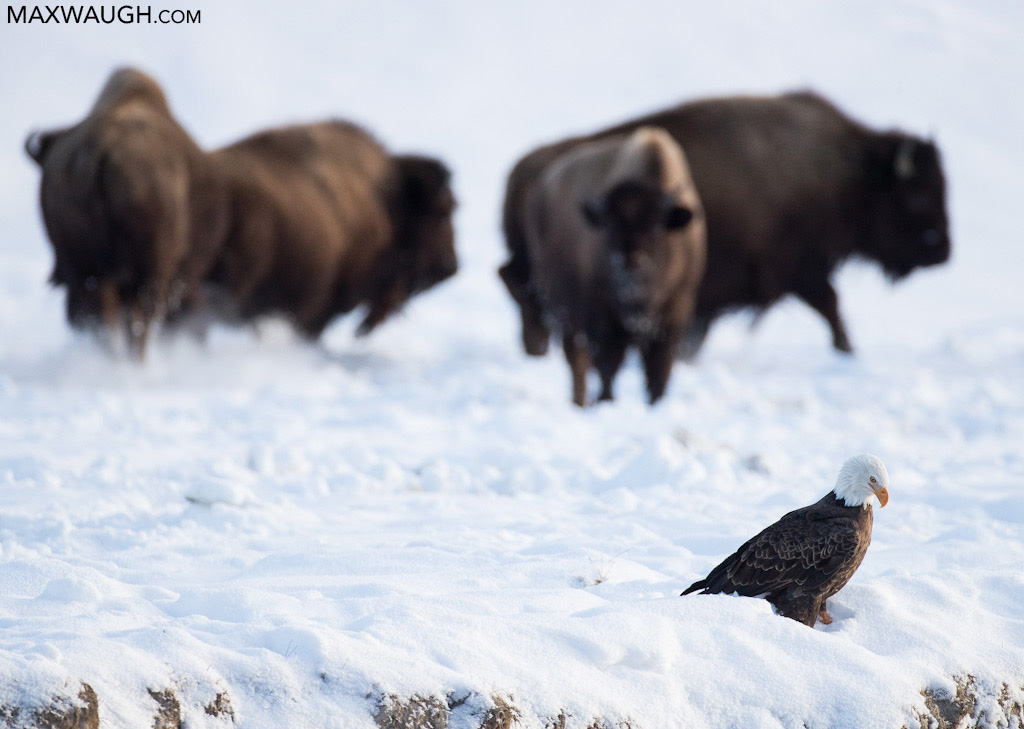 When it finally took off again, it circled a couple more times, then flapped down to splash in the river, before coming up empty and returning to its perch. The coyotes had gone downriver and reunited when the second one finally built up the courage to swim across. And the bison continued to ford the Madison.

We headed for the west entrance, keeping an eye out for fresh cat tracks but only finding more evidence of coyotes (one reason the cat may be so shy at the moment). Overall, it was a fun and fruitful day in the interior!