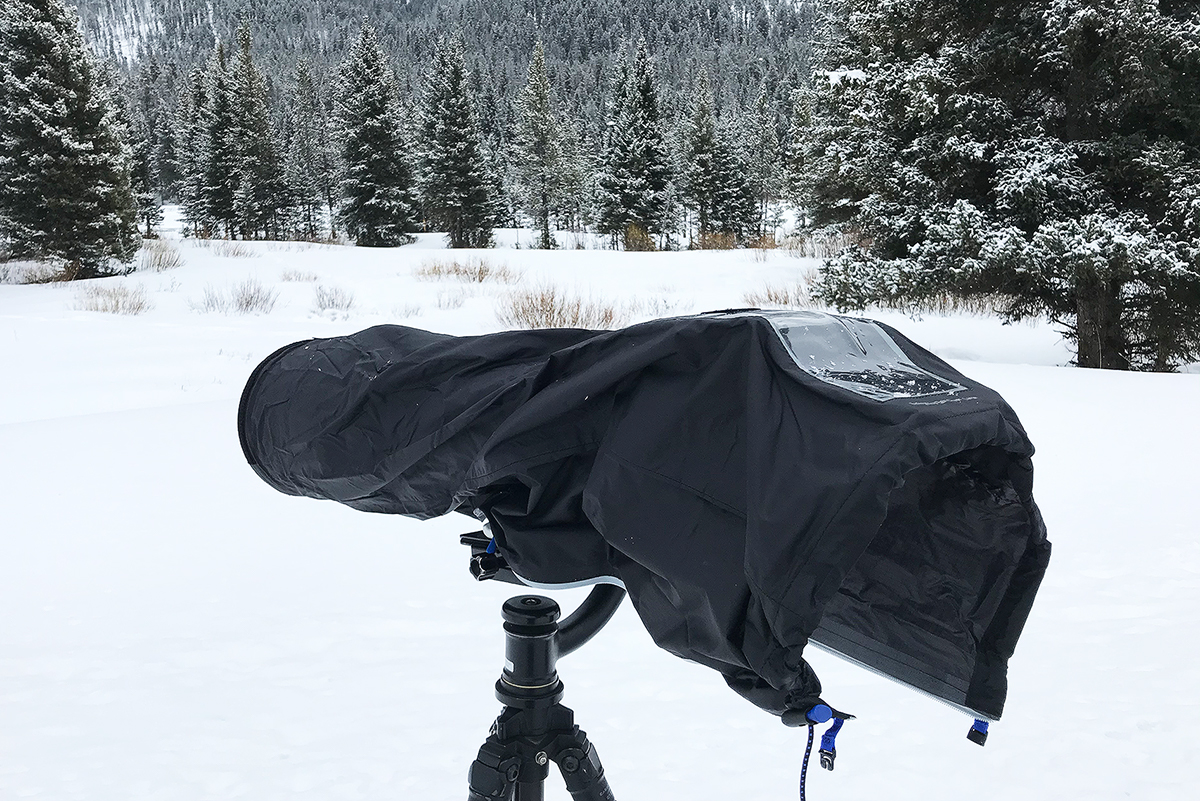 During my recent run of winter trips I was patiently waiting for an opportunity to try out my latest piece of equipment for review, Think Tank’s Emergency Rain Cover. To properly test it, I needed some foul weather. Yellowstone National Park did its best to provide an opportunity. After a run of cold, dry days, I finally had a chance to stand outdoors for a prolonged stretch in a snowstorm. It was the perfect chance to put the rain cover through its paces.

I felt like I was the perfect guinea pig for this product. I’ve actually tested other rain cover designs (for another company… the designs did not make it to market), but it’s actually the fact that I’ve been using some very similar homemade rain covers for years that set me up well for testing the pros and cons of this professionally-made item. As a result, you can expect much of this review to include references to my own design, in order to clarify some of the positives or negatives I discovered.

First, a little background. This isn’t Think Tank’s only rain cover design. For years they’ve offer the HydroPhobia covers, featuring arm sleeves, see-through windows, and the ability to ride snugly on a lens for long periods of time. From my perspective those were always a bit bulky and cumbersome, but more importantly, they were out of my price range ($150 for the large cover). This is one reason my wife and I designed a couple different big lens covers for my own use over the years.

The Emergency Rain Cover design is much more basic, but also much more affordable, ranging from $35 to $60 depending on the size you need. Had these been available ten to fifteen years ago, I may have never constructed my own.

Thanks to our own history of designing covers, this was a very familiar setup, right down to the compact carrying case.

Think Tank’s Emergency Rain Cover fits in its own compact case (left), much like the one we created years ago (right).

When it’s all wrapped up, the cover is light and compact enough to fit inside any large jacket pocket. The velcro flap seal is more convenient to access than our zippered pouch. It does have a tote handle, but does not feature any sort of clip like the one we built into ours (which makes it easy to hang off a modular belt, for example). This could be overcome, theoretically, by using a small carabiner.

The design of the cover itself is also very similar to what we created, with some obvious improvements and one minor drawback. Read on.

Make Sure You Get Enough Coverage

The Emergency Rain Cover basically acts as a lens sausage casing. It slips over one end of the lens cylinder and runs the length of it all the way to the camera body (and beyond). Again, this is very similar to what I’ve been using for years. For my purposes, I was testing the Large cover on a Canon 600mm f/4 vIII, with a 1.4x teleconverter attached, and a 1DX Mark II body. 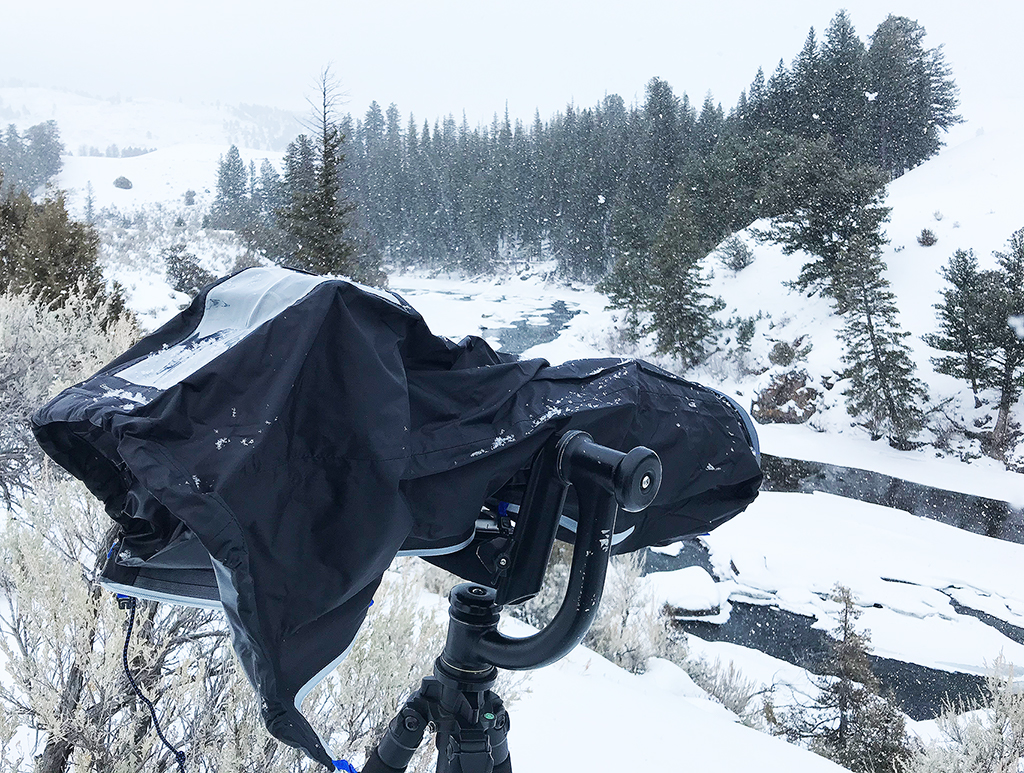 For starters, the cover offers plenty of length. This is more important than you think. If you’re measuring a rain cover to see if it provides adequate coverage, you need to consider the longest possible equipment combination you’ll be using. If you’ve got a big zoom lens that extends out on the long end of the focal range, be sure to measure from that point, rather than zoomed in. Using teleconverters? Put them on. And then make sure you have extra room. While the rain cover may be flush with the rim of the lens hood on the far end (or close to it), you’ll want to be sure the other end hangs well over your camera body. This is important if you’re in windy conditions, when rain or snow could blow in sideways, or if you’re transporting your lens and camera setup over your shoulder. You may be carrying things in such a way that your camera body is angling toward the sky, so you want to be sure the fabric protecting it hangs far enough down to scrunch and angle downward.

The large Emergency Rain Cover provided sufficient length, and I felt like my gear was fairly well-protected. There were some smaller touches which made it (mostly) an upgrade over what I’ve been using.

There are three things I really like about this design, and one thing I don’t. You can see them all in these images.

First, the bottom of the cover has two options for fully encasing the lens. Well, one-and-a-half options. In order to slide the cover more comfortably over your lens, the bottom of the cover separates. You can literally unzip it (that light gray line running nearly the length of the sleeve, above left, is the zipper). Over that are three blue and black clips. These end up being very important.

For comparison, my own cover has a very similar opening running along its bottom, but it was sealed with velcro rather than a zipper and clips. Each design has its advantages. On the plus side, the Think Tank design is much quieter. Unzipping the cover or unfastening clips is not nearly as noisy as ripping 2+ feet of velcro apart. So I can say for sure that the Think Tank cover is less annoying. The problem, however, is that the zipper will only go so far if you have your lens mounted on a tripod, because it will run into the tripod head. As a result, you cannot fully enclose the rain cover. You’re forced to use the clips to keep the two sides of the cover bottom together, which will leave gaps. In theory, rain or moisture could find its way inside through these gaps, especially if the camera and lens are being hauled around or jostled at different angles. My velcro lining, on the other hand, could still be sealed on the other side of the tripod head, providing much more comprehensive protection.

Ultimately, I look at this as a relatively minor drawback, since the large Emergency Rain Cover is primarily intended to be thrown on at quick notice, and used in primarily upright and stationary positions.

Something I liked quite a bit about Think Tank’s cover is the velcro strap used to tighten the end of the cover around the lens hood. This design feature is also available on their HydroPhobia covers. My own cover had a built-in elastic tie with an adjustable toggle that could be used to tighten the cover on the end of the hood. Think Tank’s strap design tightens much more smoothly and easily, and probably provides a better moisture seal.

Hotshoe Mount and Back Panel

The end of the Emergency Rain Cover contains two important features. The hot-shoe mount is something I’ve been missing out on for years, and is a wonderful little thing that keeps the cover centered on the camera body… which mostly matters if you have a transparent back panel you need to look through.

The first iteration of our homemade covers also had see-through panels, one on the back and one on the side (the latter allowed me to see the lens switches). One issue I found is that these fogged up consistently. I didn’t face that issue during my Yellowstone tests, but I would be curious whether things might be different in a warmer, more humid environment (if/when I get a chance to test it in a rainforest, I’ll come back and provide an update).

The back panel is handy for quick image review or for making adjustments if you’re not entirely familiar with the layout of your camera buttons. Most of the time, however, you’ll probably find yourself tucked underneath the cover anyway, or you’ll be rolling it back out of the way. 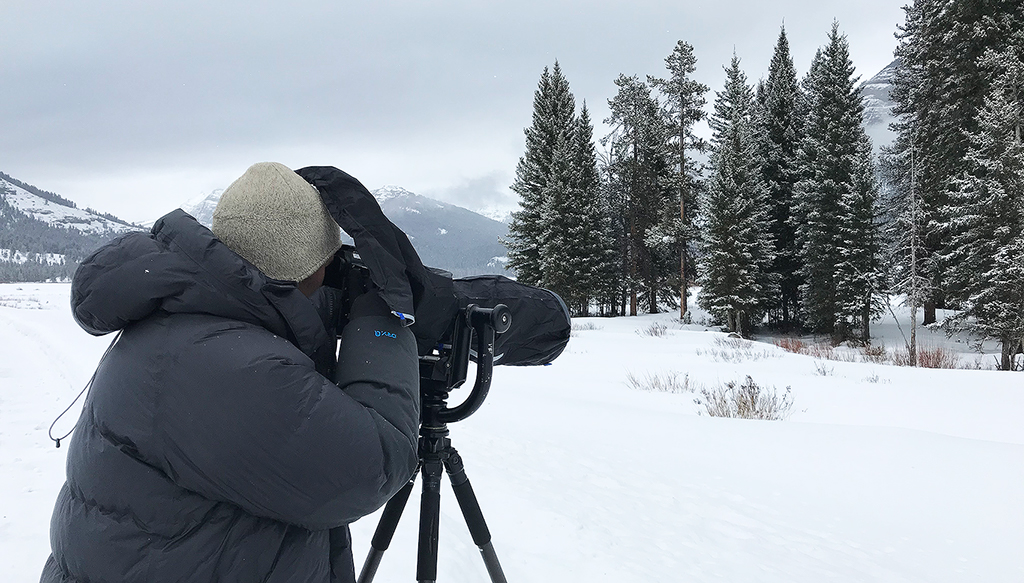 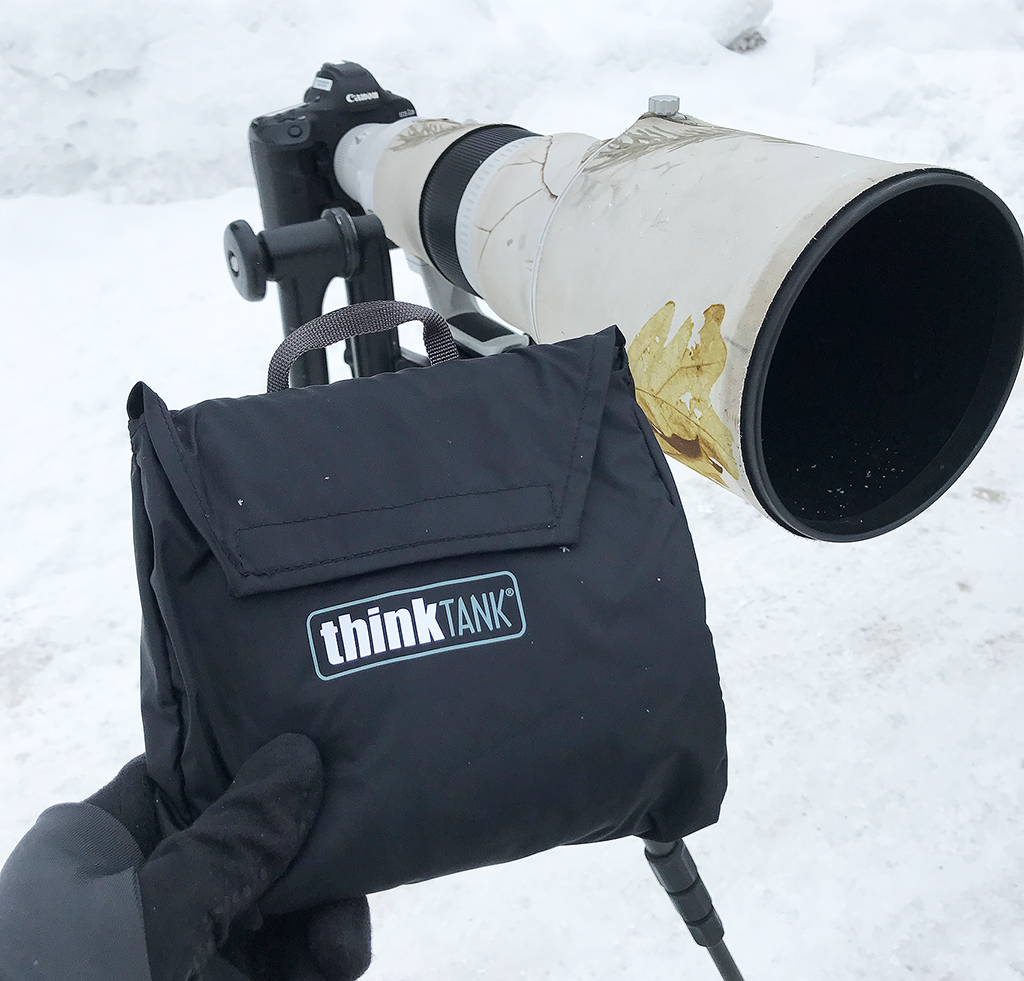 The large Emergency Rain Cover is exactly the type of thing I wanted ten to fifteen years ago, and I’m glad this type of cover is finally available to the consumer. It’s light, compact, and easy to get on and off. The material holds up well in heavy snowfall, and I suspect will do the same during basic rain showers. How well it could handle a prolonged downpour in a tropical rainforest is something I’m eager to see. Even if the design (including the sleeve length and bottom attachments) are sufficient for keeping moisture from running inside, the durability of waterproof fabrics and plastics varies. I’ll be curious to see how this cover holds up in the long run. I suspect I’ll get ample opportunity to find out, as this will be my go-to cover from now on, and I can finally retire my own design.

Most importantly, it’s much more affordable than most of the well-designed professional rain covers out there. And that, to me, makes it a must-have for big lens photographers.

You can purchase this cover (or those in other sizes) via this link.

Purchases through this link help support my business. Buyers spending at least $50 also qualify for a free gear gift and free US shipping from Think Tank Photo.