Hunting With the Hadzabe 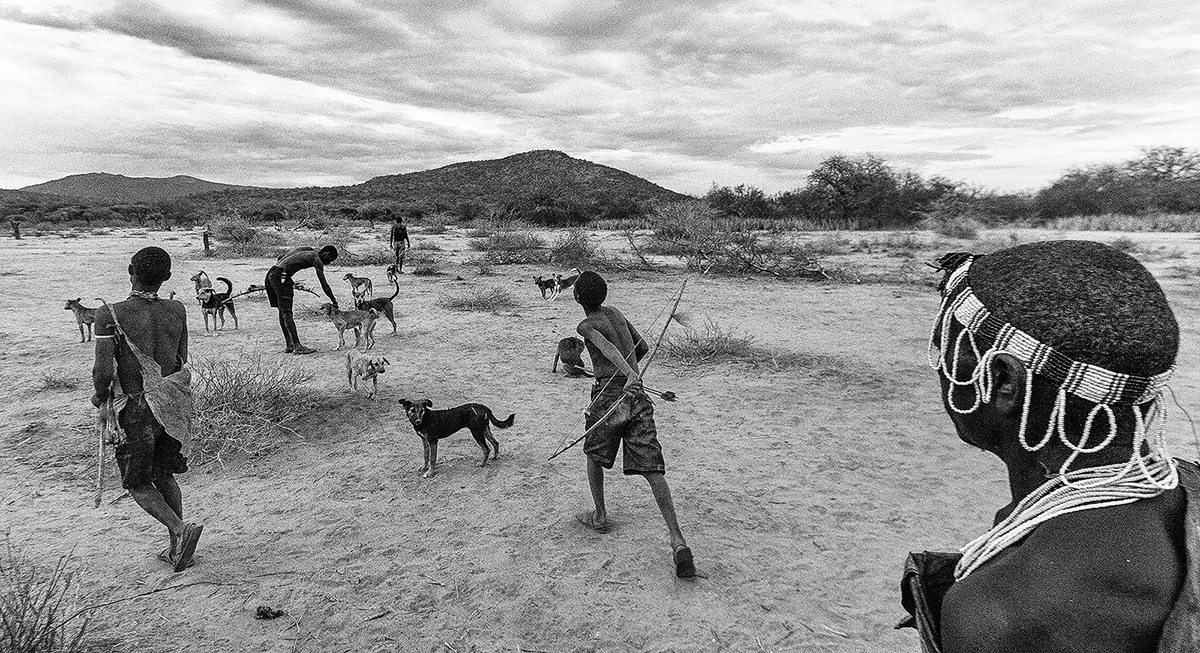 Last week I unveiled part of the reprocessed collection of cultural images from my 2007 trip to Rwanda and Tanzania. This week I’m sharing the second part of that collection, which focuses on our most memorable interaction with one of the local east African tribes.

When we planned our Tanzania safari, we were convinced to take time to visit Lake Eyasi in between the more typical stops at Tarangire National Park and the Ngorongoro Crater. Thirteen years later, I don’t really remember why we opted for this excursion. It wasn’t billed as a wildlife area (and indeed, we saw few animals). If anything, it stands out as having one of the worst roads I’ve ever driven on. I suspect the draw may have been the opportunity to visit the Hadzabe (Hadza) tribe 1, and go on a hunt with them. This was our first trip to Africa, and we weren’t sure if we’d ever make it back, so the idea of mixing in some different experiences with the more standard wildlife-based exploration probably appealed to me at the time.

The hunt was definitely the highlight of the Eyasi leg, despite its challenges and some questions I’ve had about it since (more on those doubts below). But I don’t think it was until many years later, when I revisited the photos and processed a few of them in monochrome, that the success of this outing really hit home. I’m not much of a portrait photographer, and I have photographed very little in the way of people and culture during my travels, so the breadth of this collection of images—telling a human story from beginning to end—is something incredibly rare for me.

I had to make some artistic choices when I finally sat down to rework this collection recently. I knew I wanted to do the full series in black and white, even though a few of the images may work better in color (thanks in part to the colorful beadwork on the mens’ clothing). There were a lot of shapes and tones that seem to work well in high contrast monochrome presentations—handsome people exploring a stark, arid environment—but I also opted for a grainy look. This is perhaps intended to evoke and old-fashioned documentary styles (“the film days,” which I had technically just left behind the year prior), but I think it also represents my fading memories. We’re now thirteen years on, so this is practically ancient history in the timeline of my own photography.

I hope you enjoy the story and the series. It’s something I remain somewhat proud of, years later. You’ll find a few extra photos from the hunt (along with the rest of the Rwanda/Tanzania culture images) in the photo archive.

We arrived early in the morning at the Hadzabe camp. Gray skies kept things cooler, but the tribe was already up and moving. The men in this family group (the majority of whom were probably teenagers) were slowly preparing for the morning hunt. 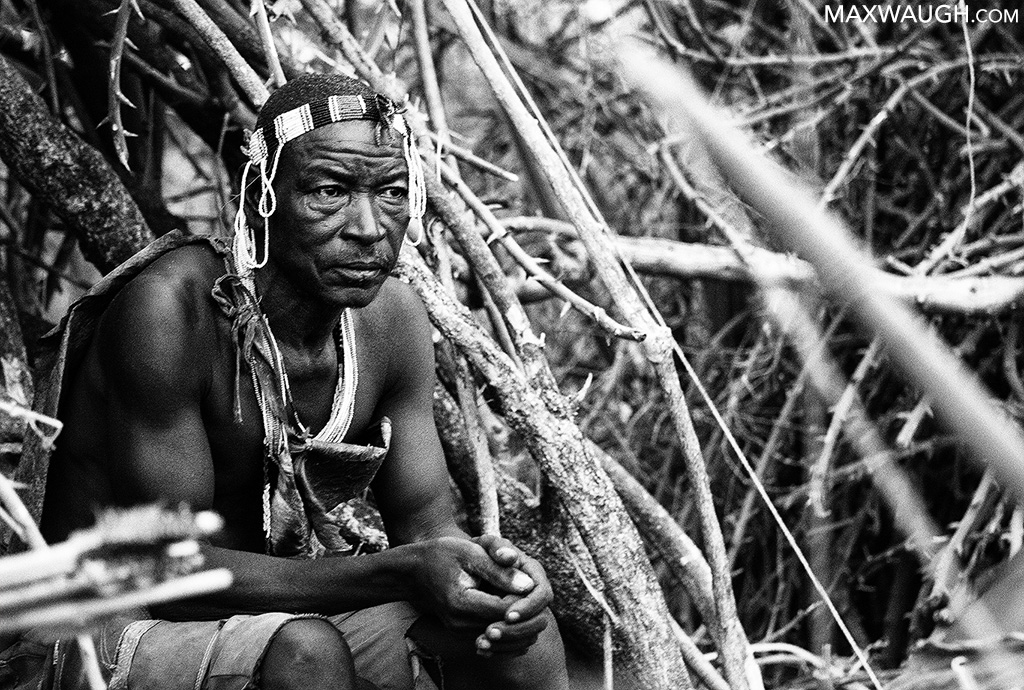 Campfires were started in front of their stick and animal hide huts. One of the men used the heat of the fire to make sticks more pliable. He then bit down on the stick to straighten it as he formed it into an arrow. 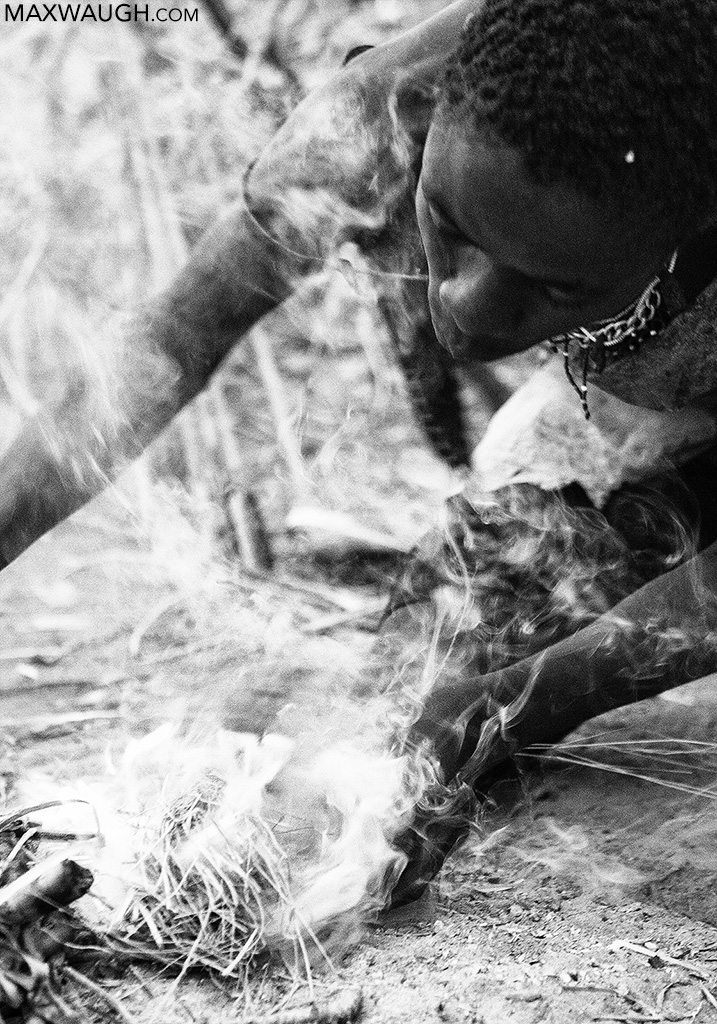 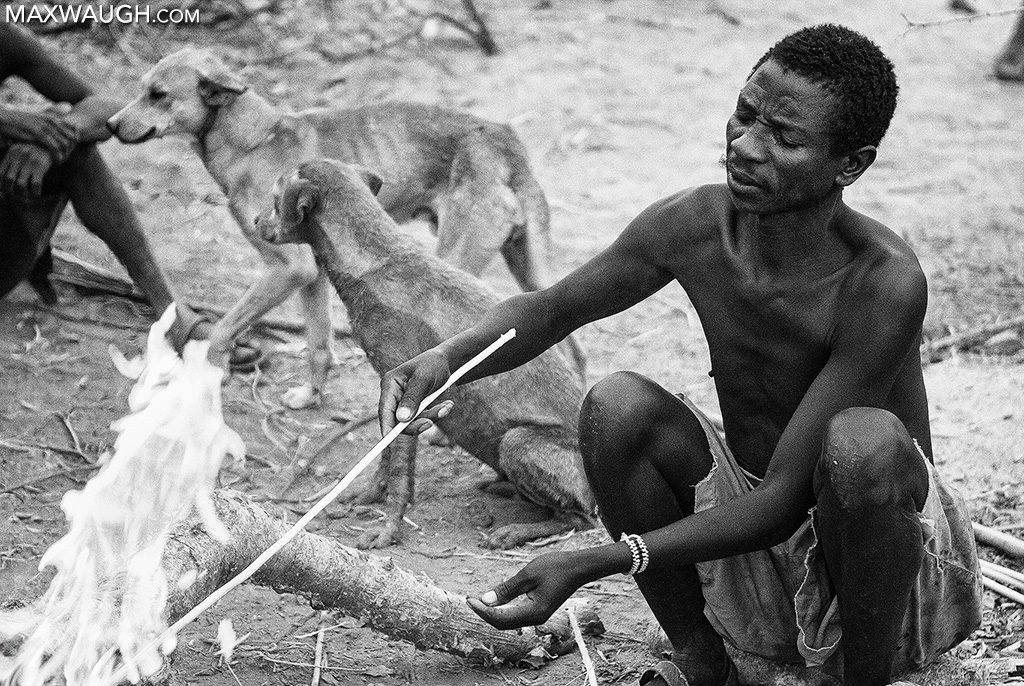 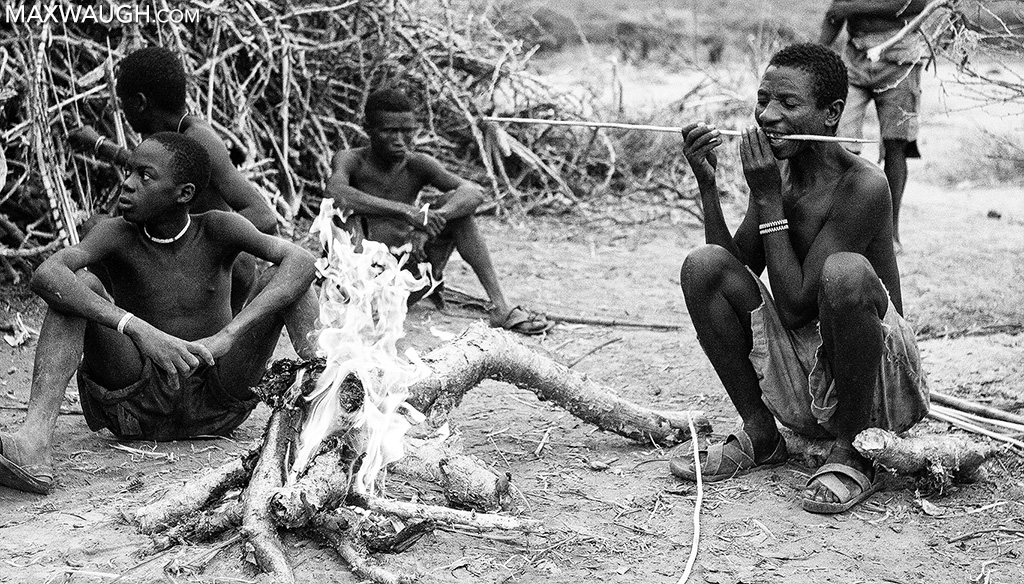 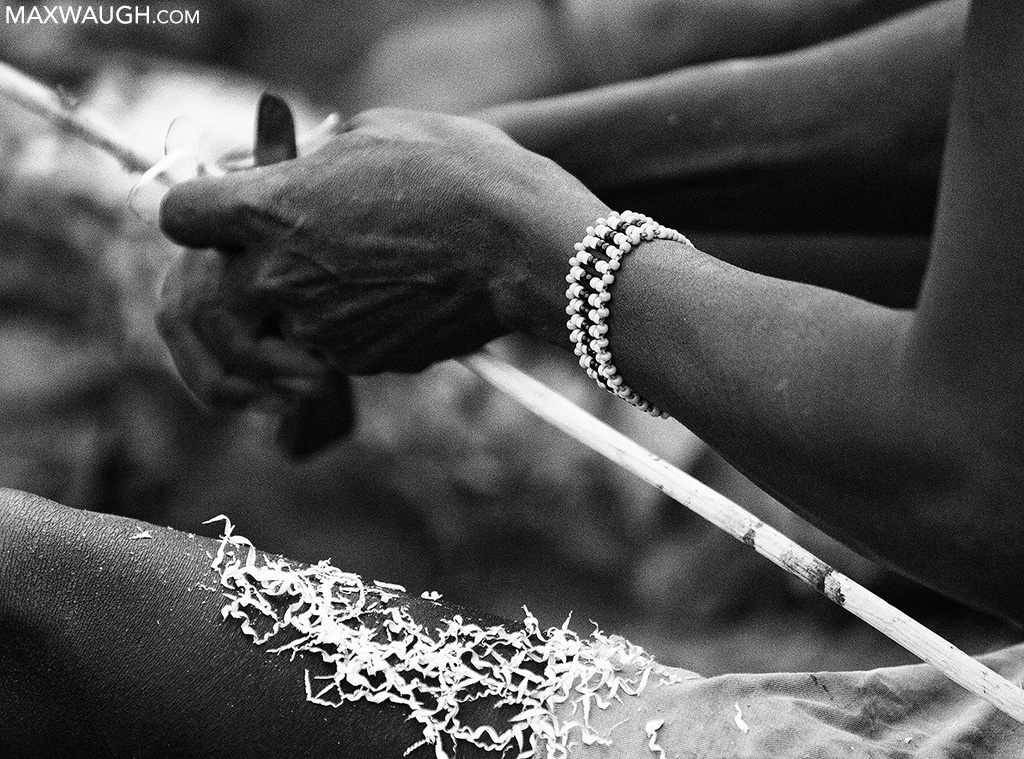 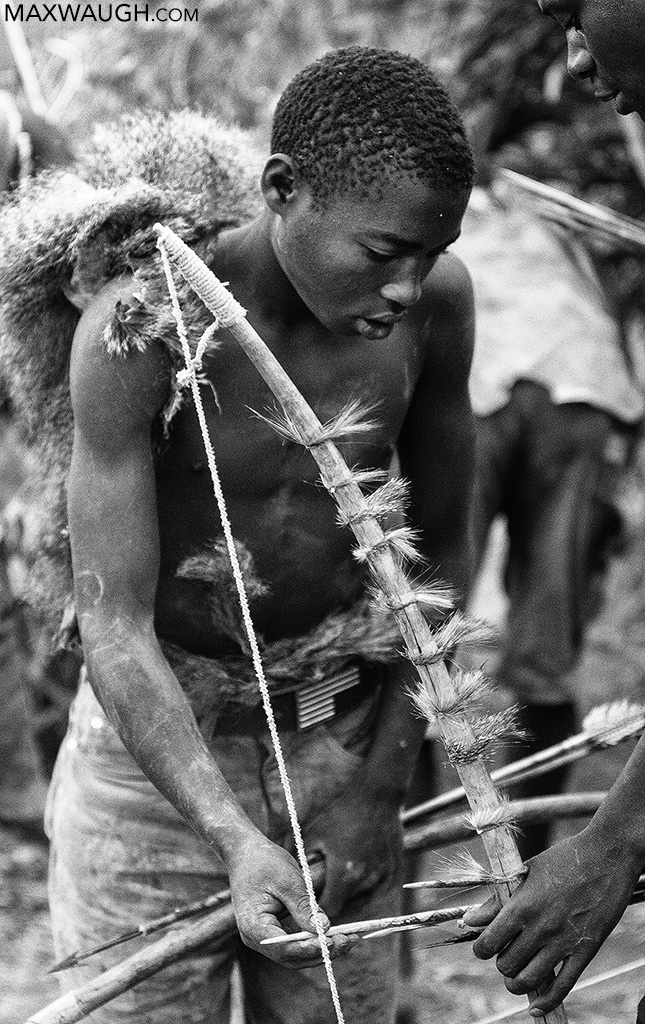 The Hadzabe are something of a nomadic tribe, which helps explain the basic, temporary housing. They are primarily hunters, so they have to follow the game in order to survive. The men do the hunting in the tribe, and as a result we barely spent any time with the women. By the time we arrived, they were off to the side, huddled off in a corner. We were told by our guide that during the day the men and women remain separate from each other, so I assumed at the time this was a somewhat standard patriarchal culture. But this was apparently a mistake on my part, as I’ve read more recently that both genders maintain pretty equal standing in Hadza society. 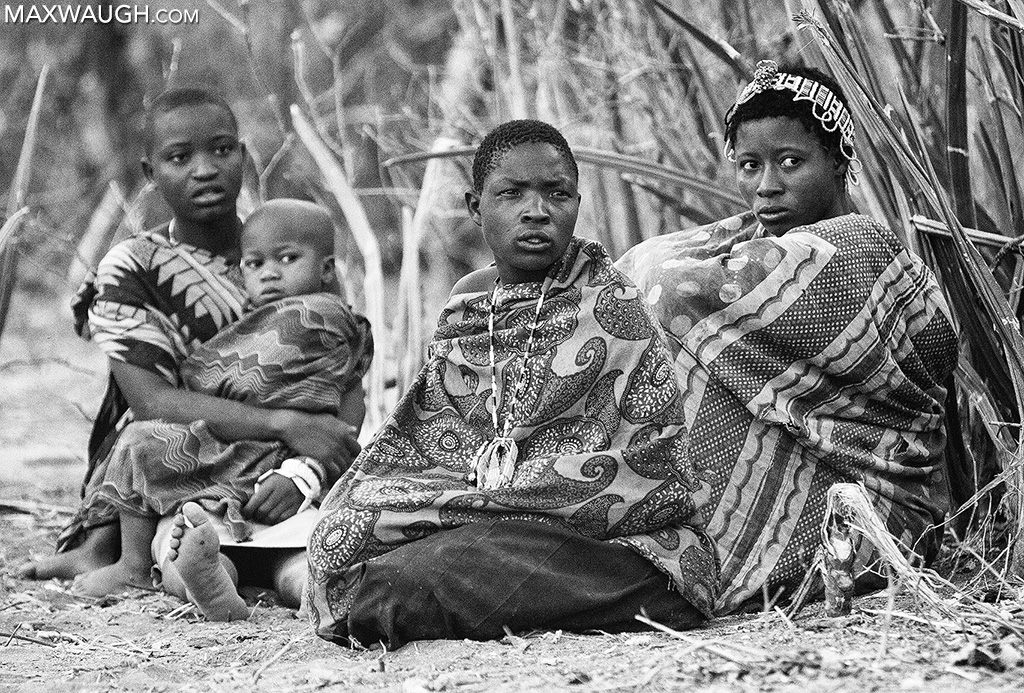 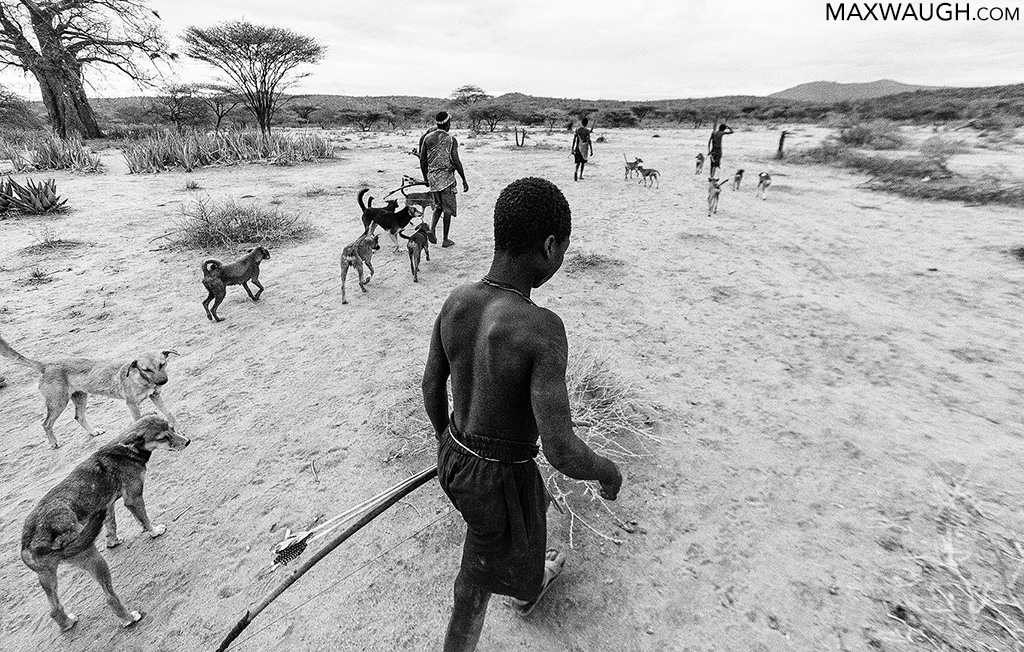 The landscape was fairly open, an arid scrubland that allowed plenty of room for walking and, you’d think, little room for wildlife to hide. 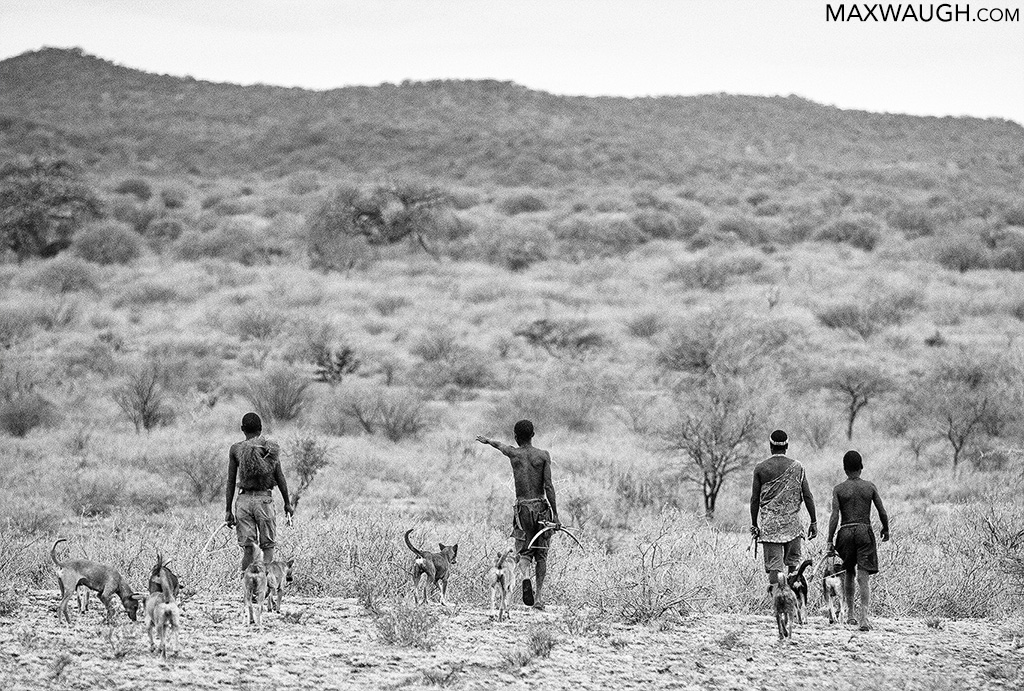 We quickly figured out that we were in for a bit of a workout. I was carrying two cameras, and soon I was huffing and puffing to keep up with the hunters, who spread out into the bush to search for their quarry. I soon left Jenn in the (literal) dust back with our guide as I rushed to keep up with the men and boys. 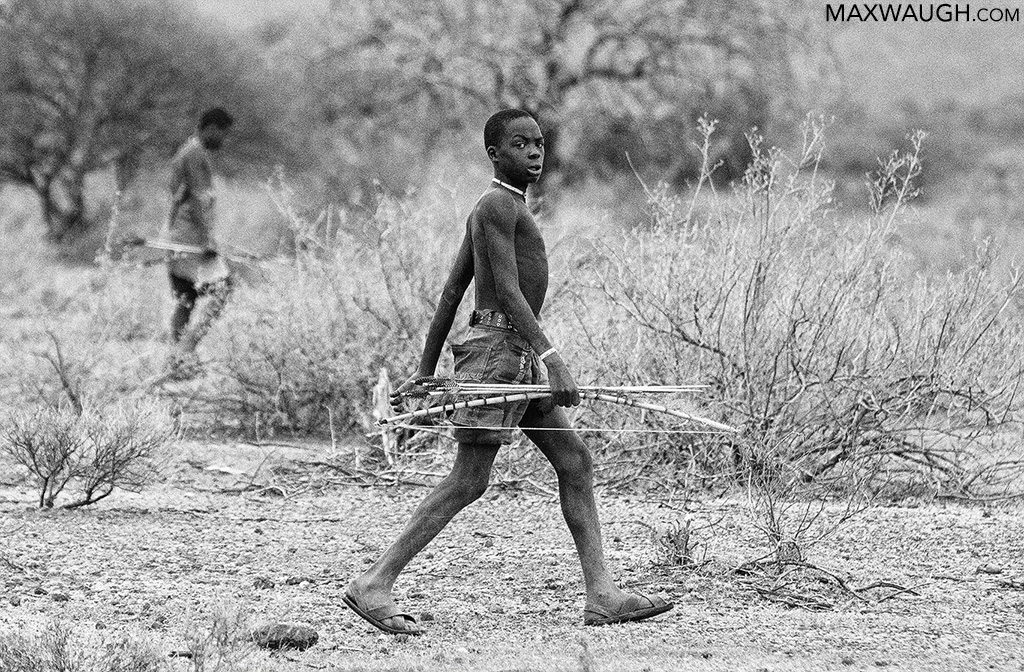 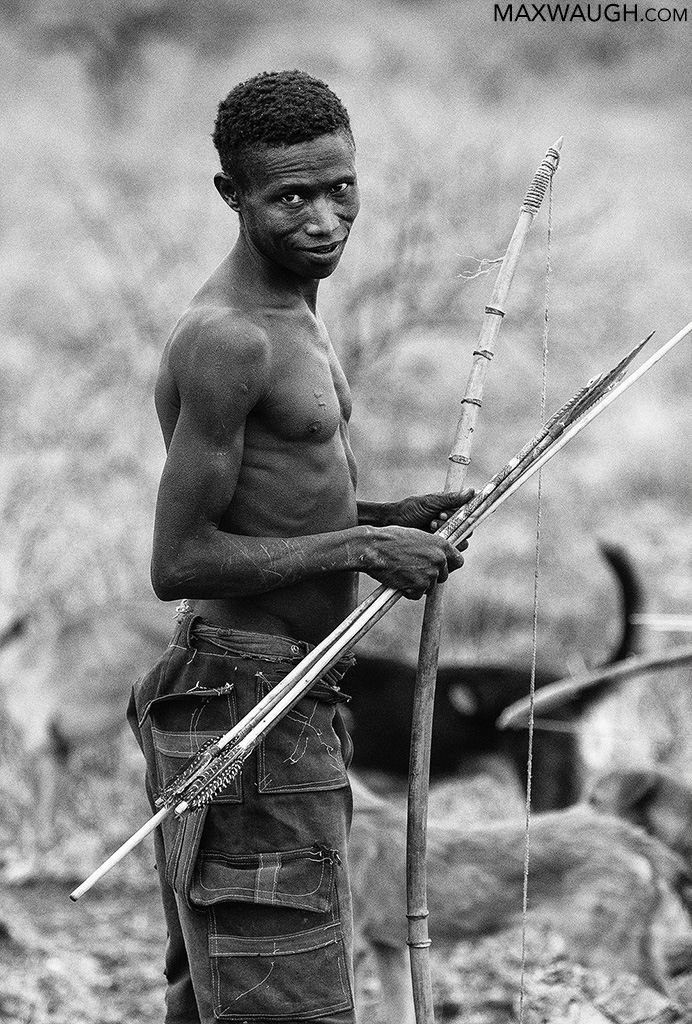 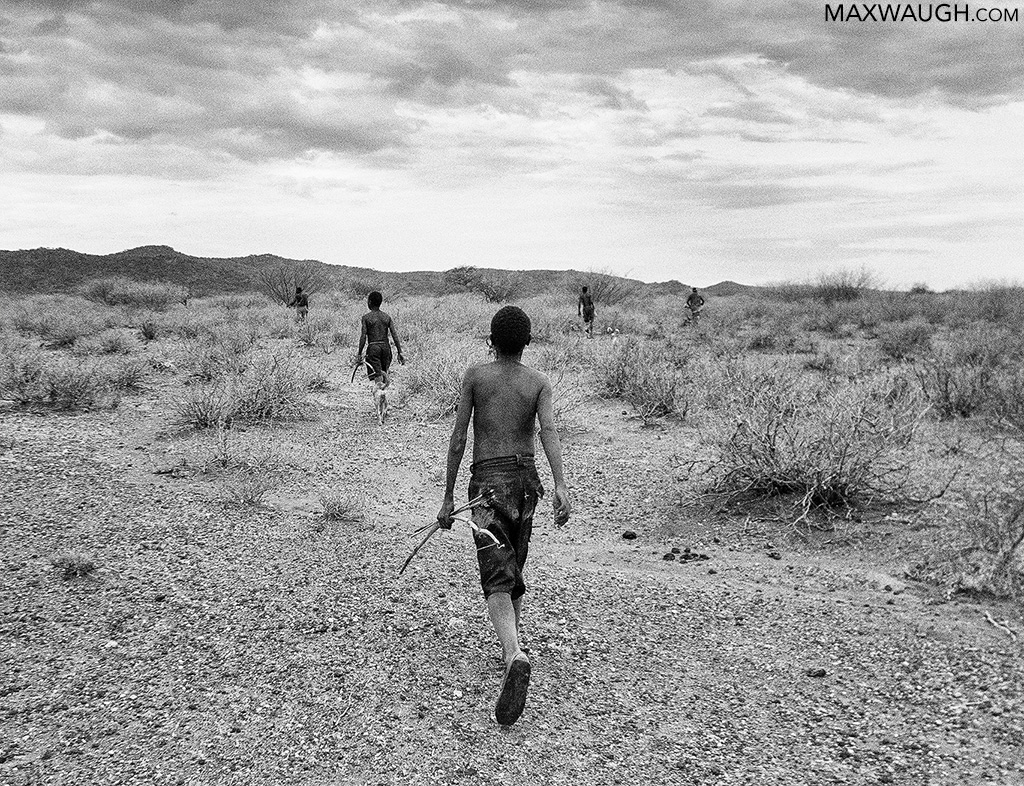 Dogs played an important role in the hunt. Several accompanied the men as they scattered across the scrubland. 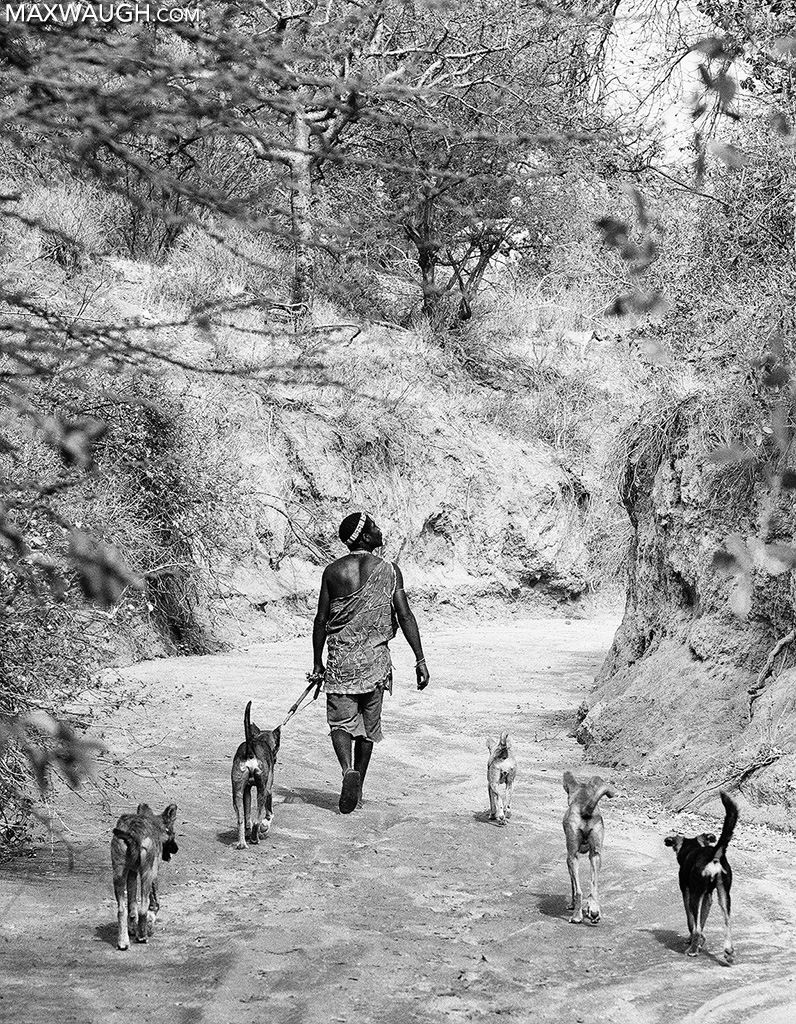 They’d come upon large clumps of tangled branches and the small dogs would immediately dart in to listen and sniff around for potential prey. If a bird or small mammal was detected, the hunters would quickly fire arrows into the bush. In most cases we witnessed, they missed, and of course it was important to locate and retrieve the precious ammunition afterward. 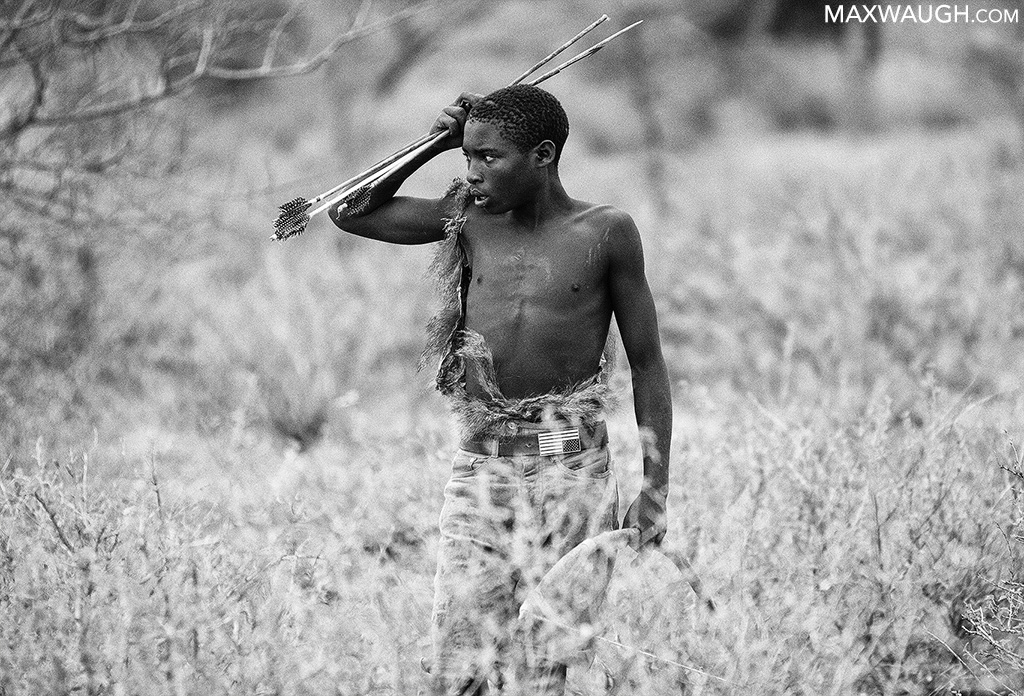 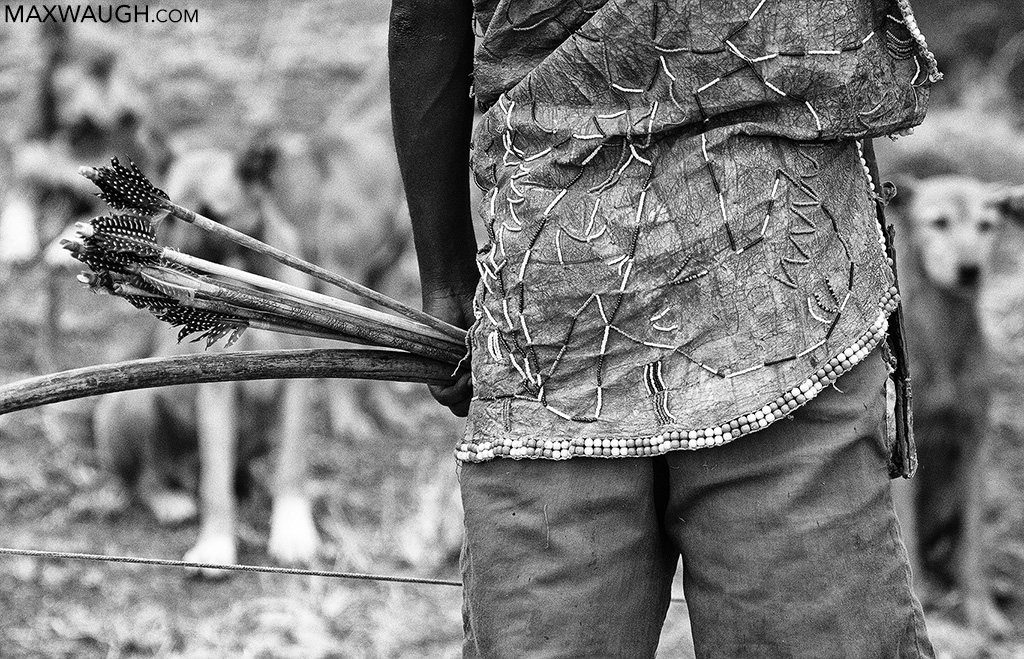 Despite their usefulness, the dogs didn’t appear to be loved in the same way we interact with pets back home. Many times we witnessed the Hadza kicking and whipping their animals any time one got in the way.

The Hadzabe language mixes clicks with more familiar sounds. It was incredibly difficult to emulate when they tried to teach us a few words. During the hunt, however, they’re so spread out they would often resort to whistling to stay in communication. 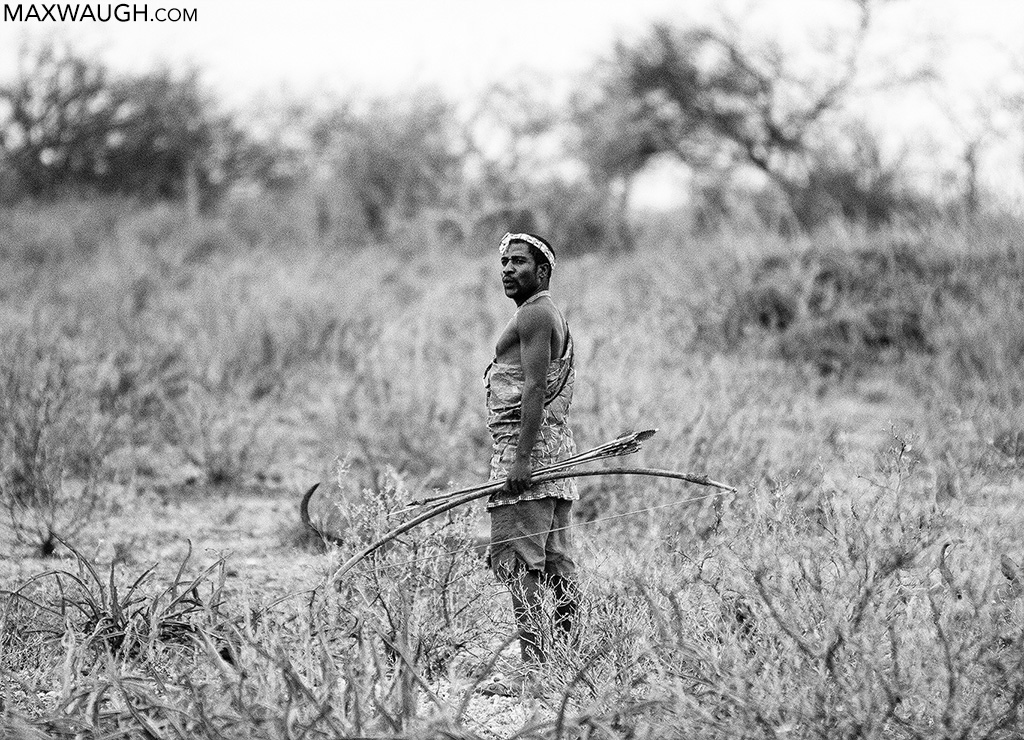 The hunters would listen to each other to get clues as to whether anyone was having any luck. Sometimes, they would rest and wait (I appreciated the downtime!) before the next alert came in. 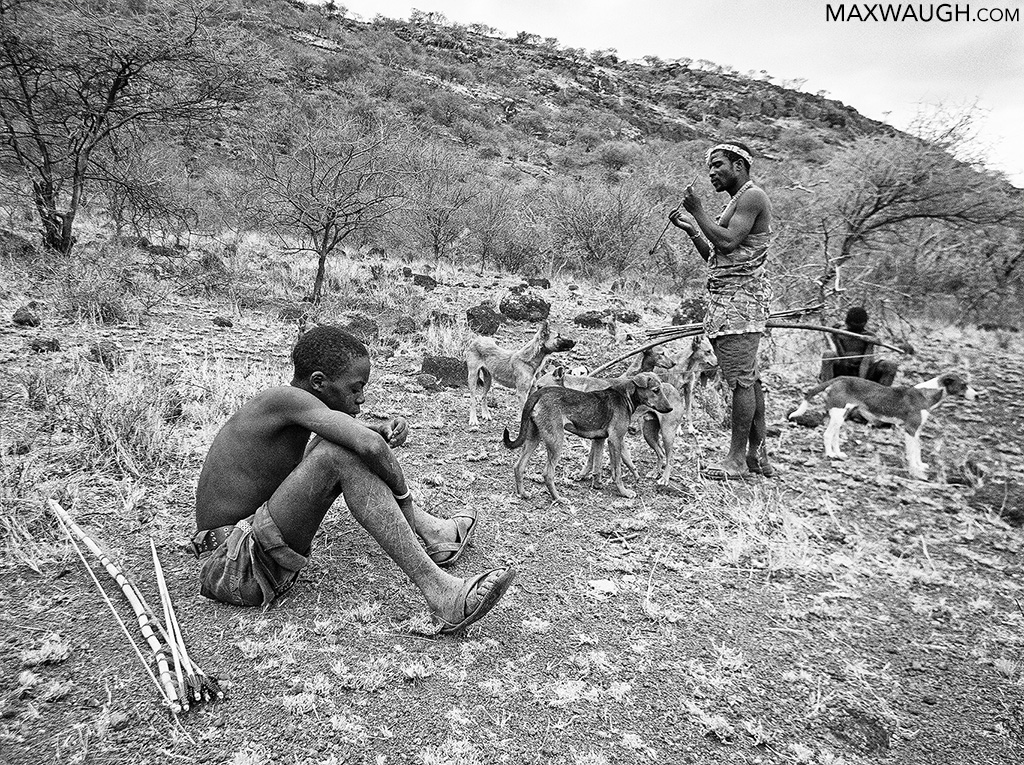 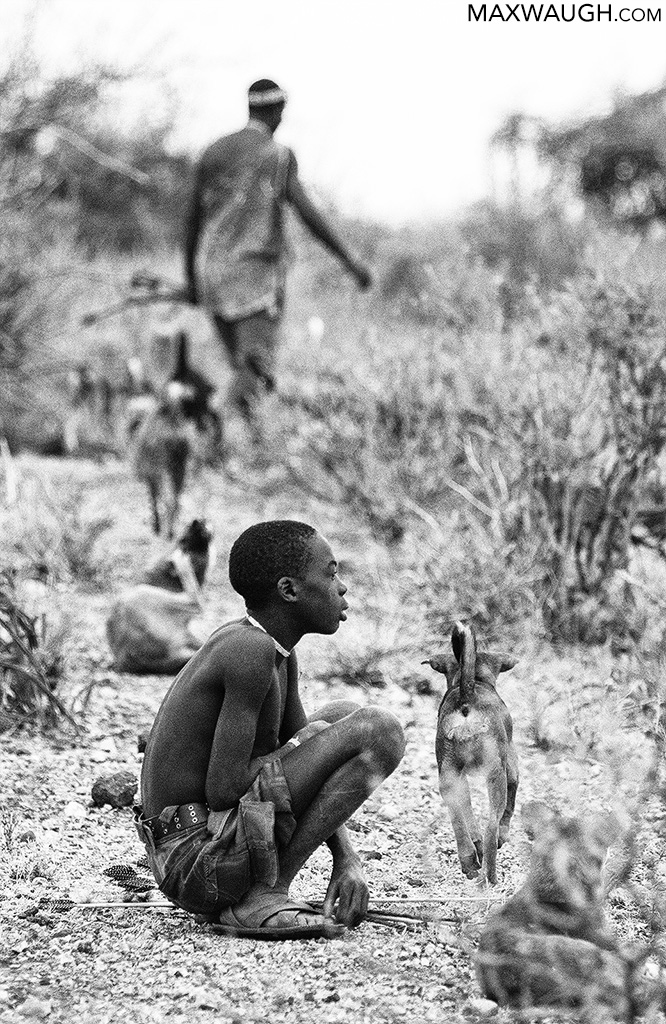 We happened to be near two of the younger members of the hunting party when they cornered a Helmeted Guineafowl in a bush. A couple shots were fired… 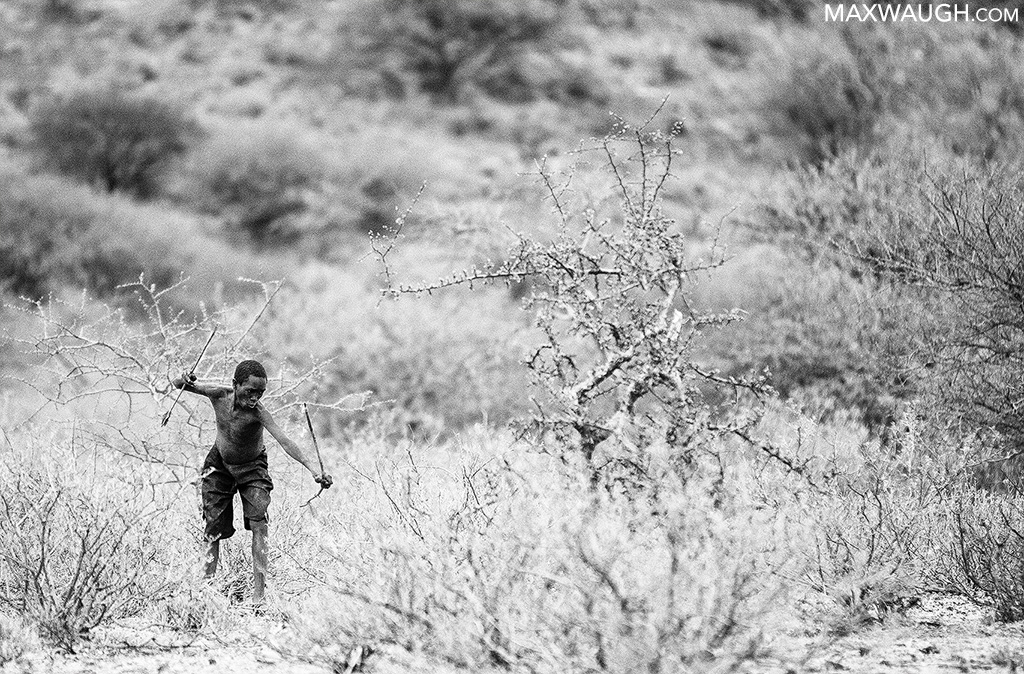 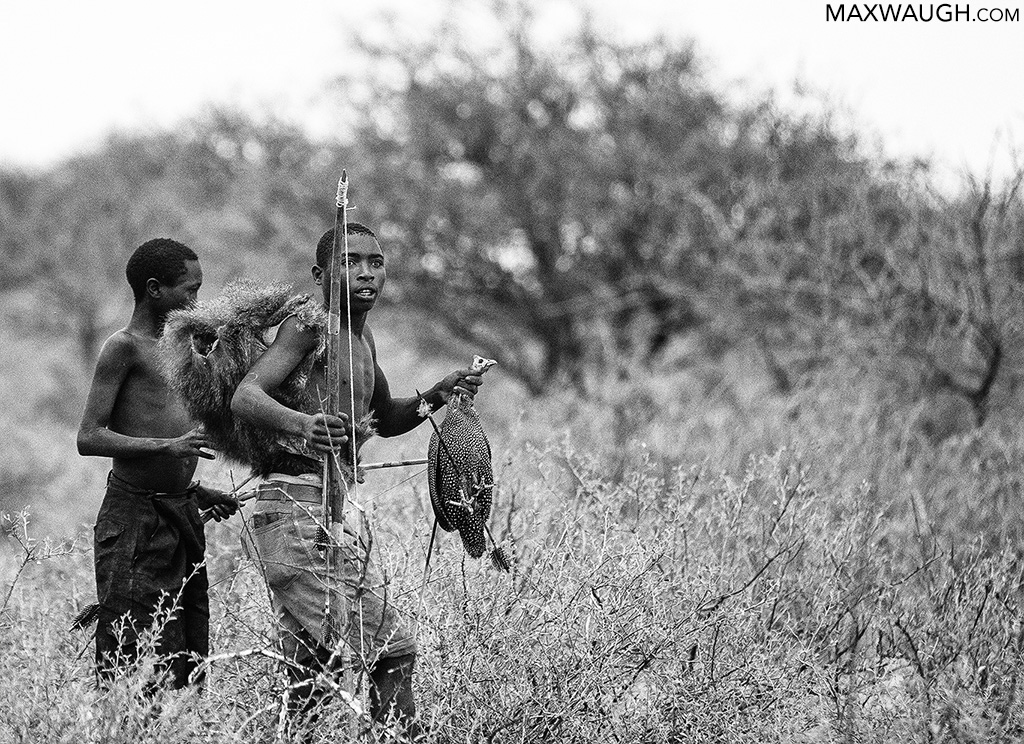 The boys were proud of their kill, and for good reason. This was the only thing the group caught the entire morning. 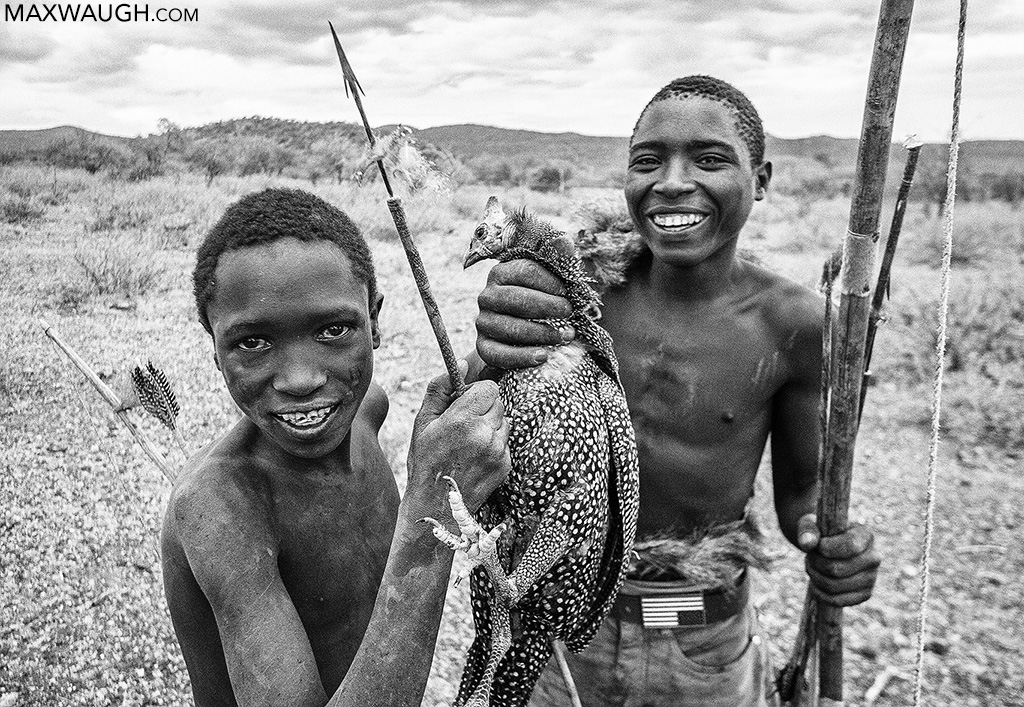 The hunt continued for a while afterward. After all, one chicken isn’t much to feed a hungry hunting party (or the family waiting back home). They continued to search in vain. 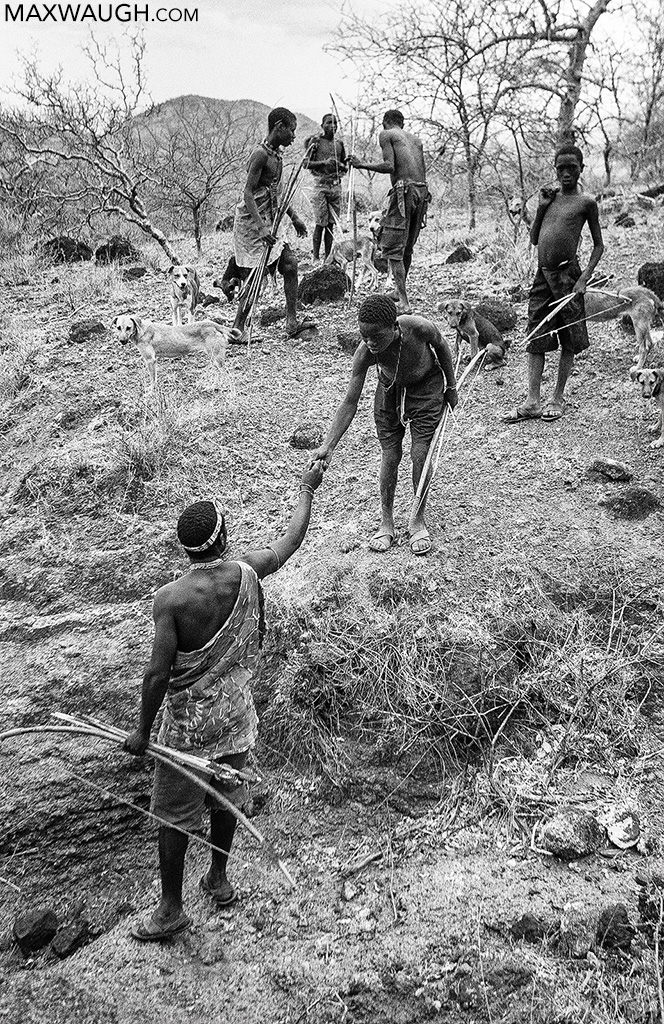 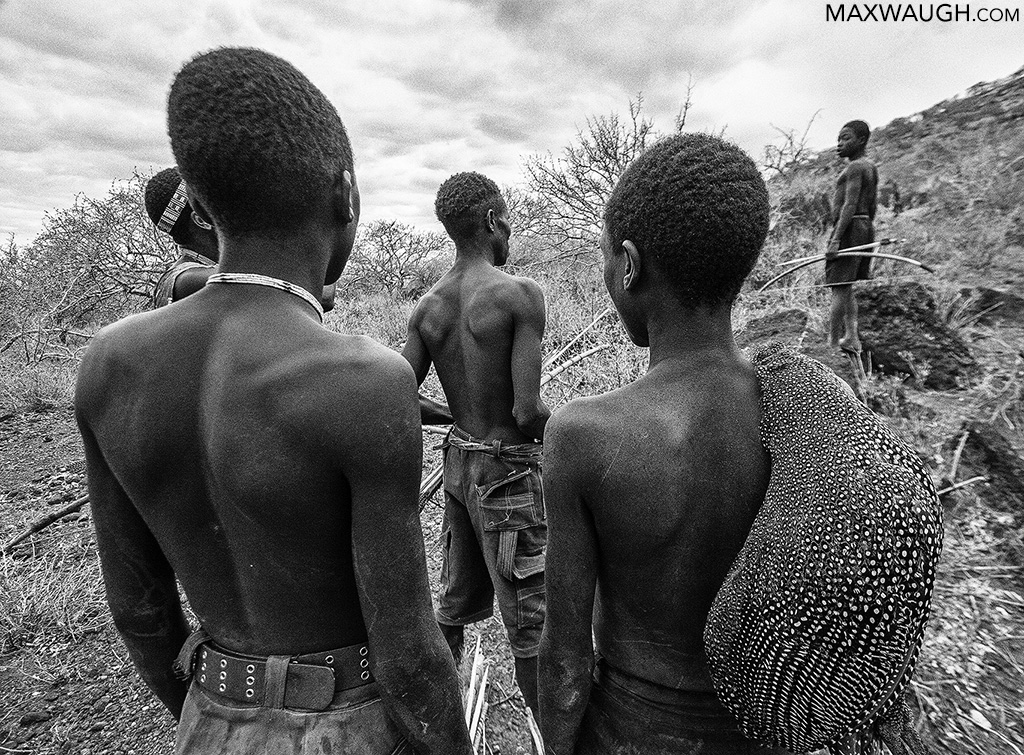 Eventually, they decided to call it a morning. On my photographic safaris, we often have “breakfast in the bush.” The Hadzabe are no different. The one guineafowl would feed eight boys and men that morning. 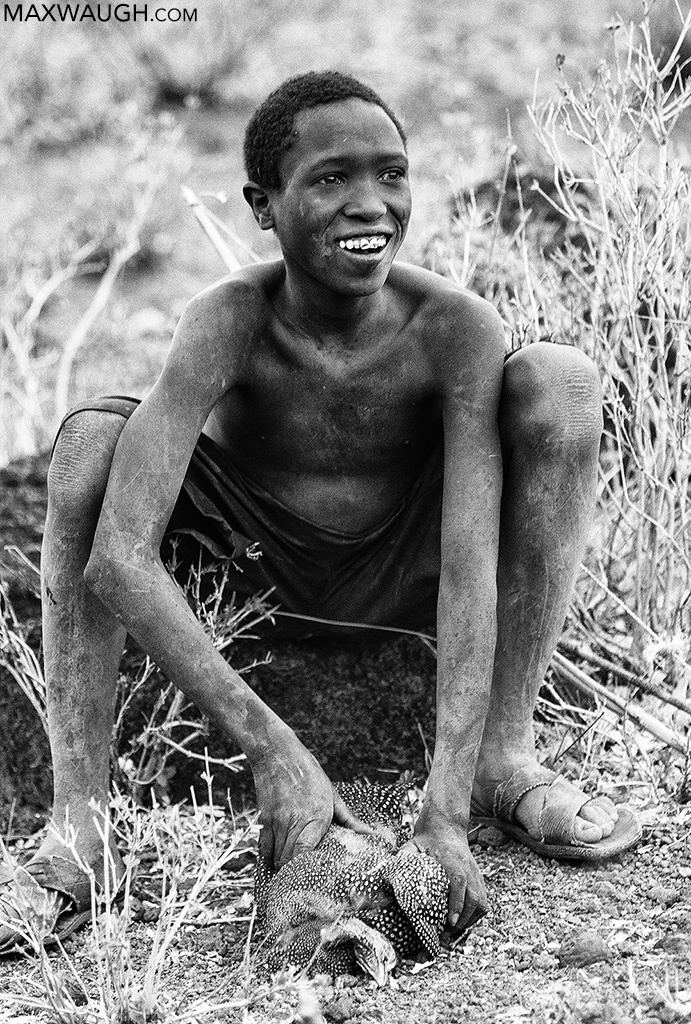 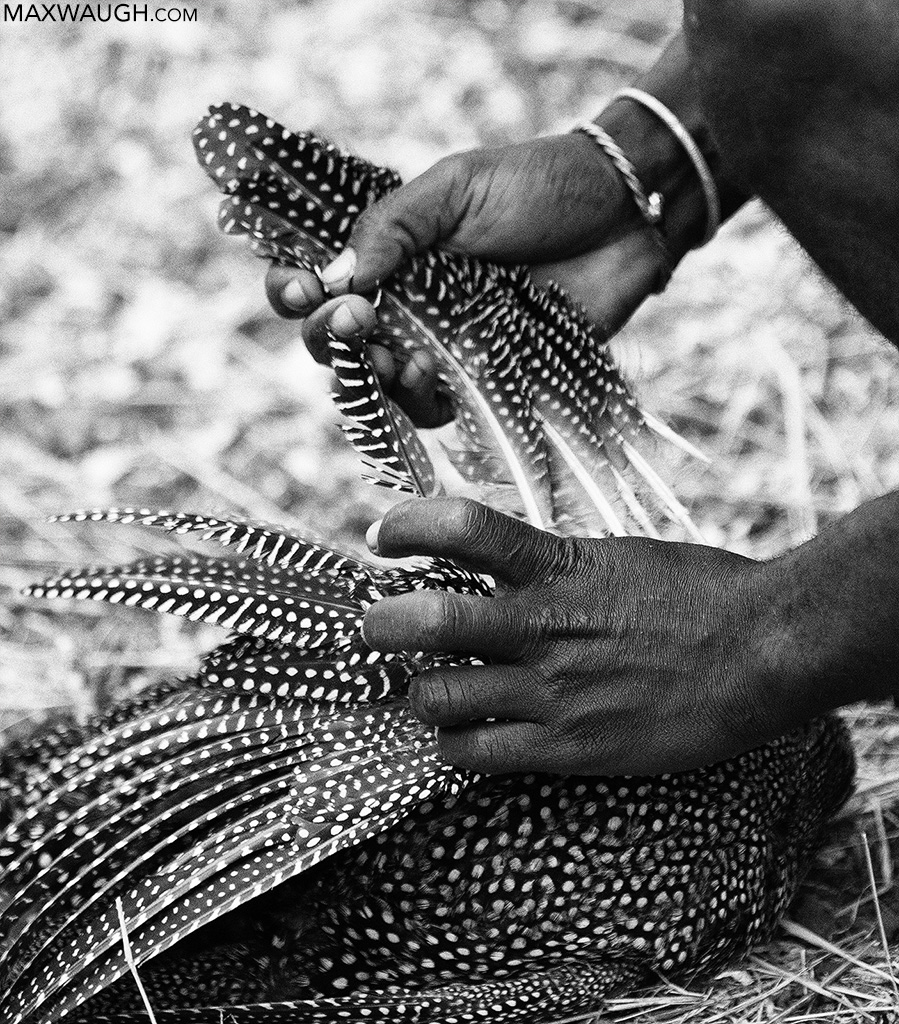 Feathers were plucked and saved to fletch arrows. Once the bird was cleaned on a bed of clean, green leaves, it was torn apart and thrown in chunks onto the fire. 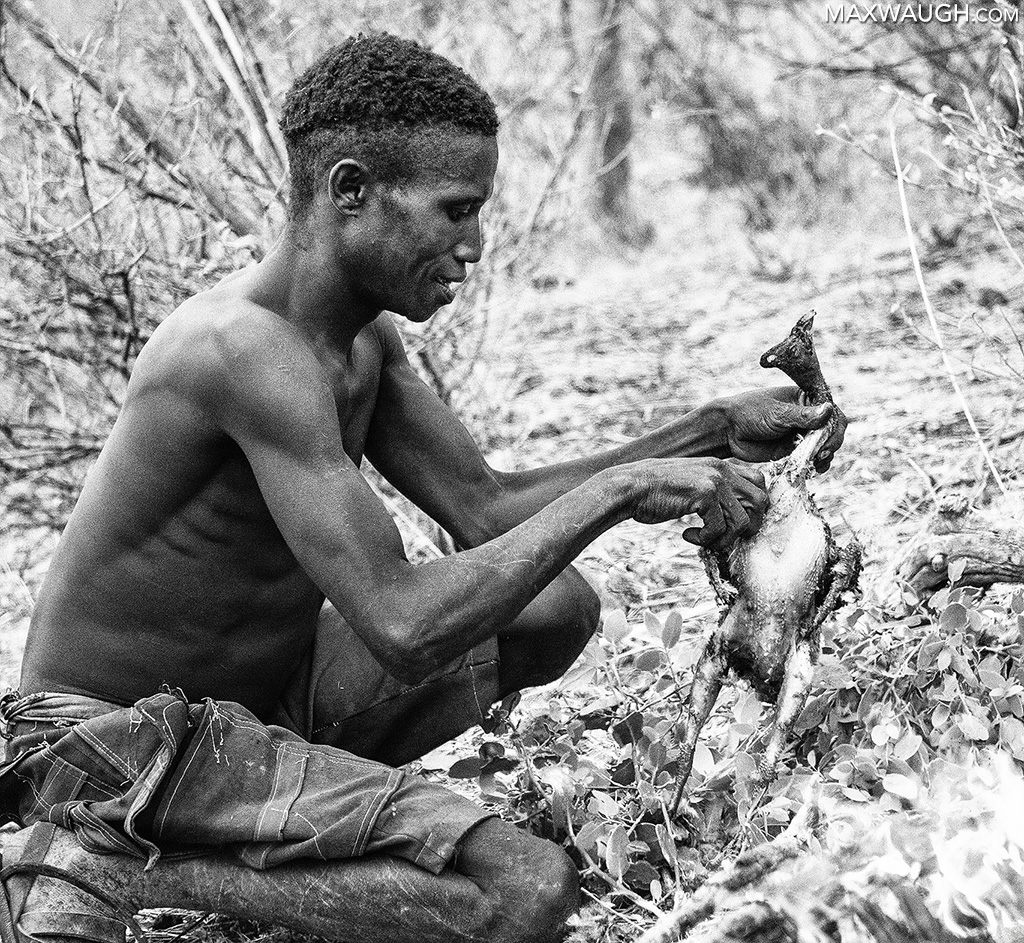 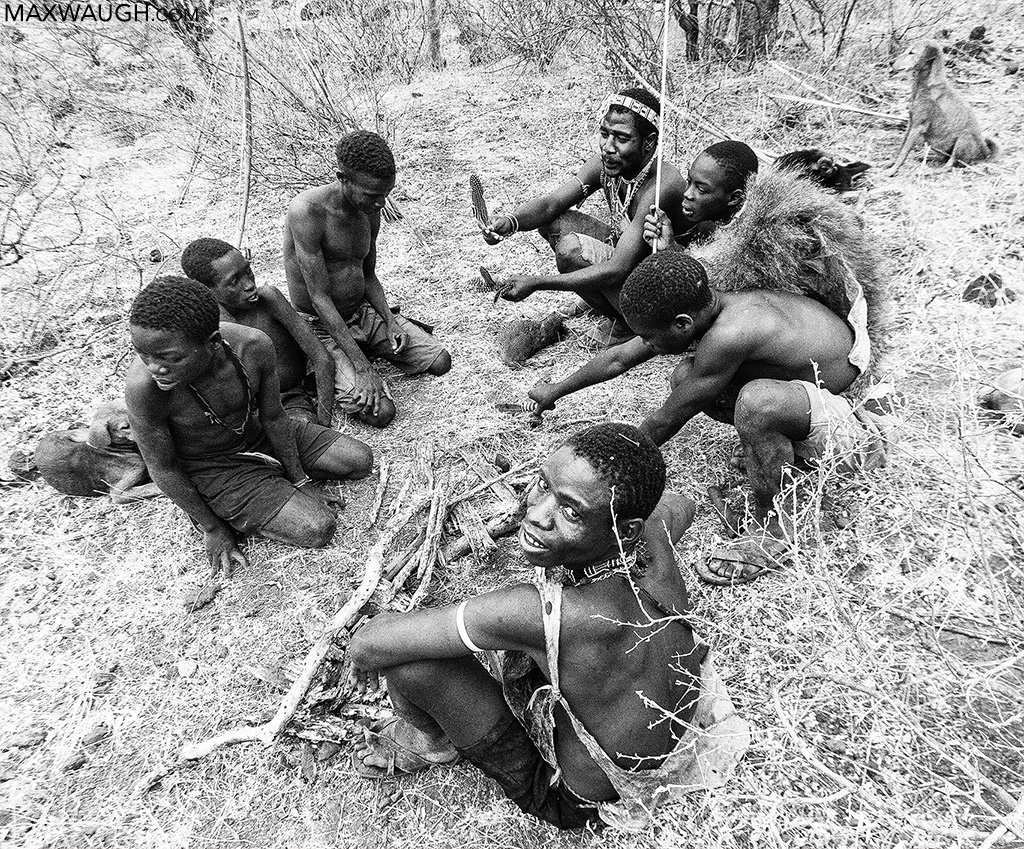 Despite the meager meal, the men offered us a taste. Yes, Guineafowl tastes like chicken. We may have been fortunate in the sense that they killed and prepared more familiar game. Later in the trip we spoke with other tourists who joined another Hadzabe group on a hunt. They had declined the samples of civet that had been killed. Monkeys and even leopards and other larger game are all taken as needed to help the tribe survive in this sparse land. So a morsel of chicken for breakfast was just fine for us. 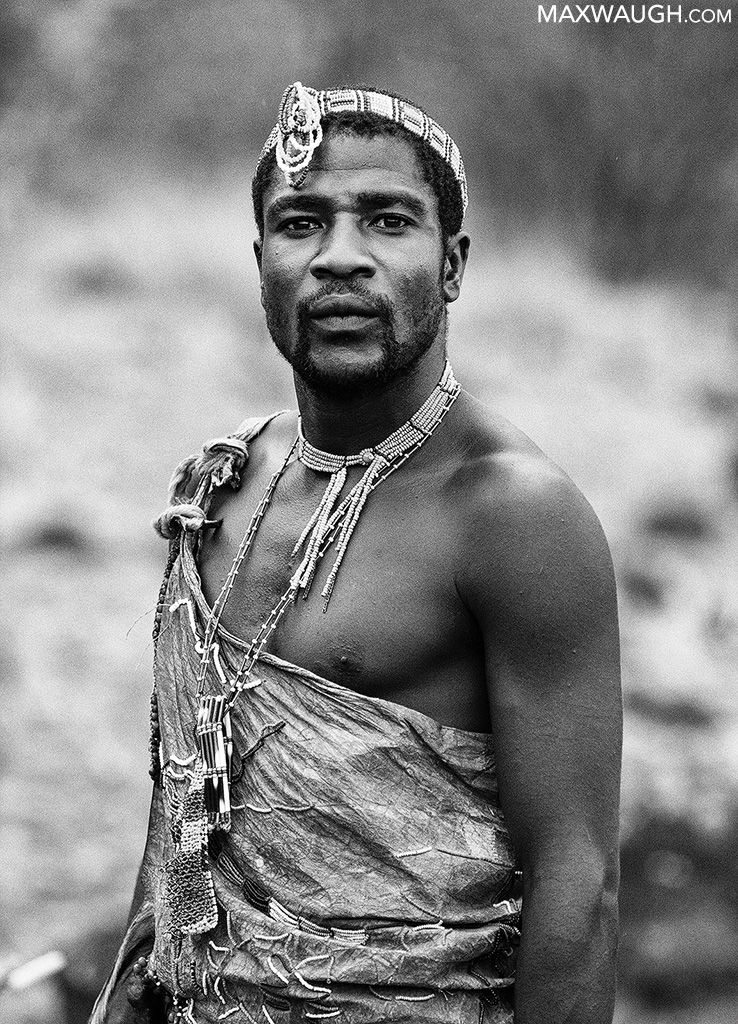 In the moments following our departure from the Hadzabe camp, and in the subsequent months and years, I’ve reexamined our experience with the tribe and sometimes questioned what we saw. How much of it was a “genuine” experience? How much was staged?

Before we left, they tried to sell their bows, arrows, and bead trinkets. Tempting, but I wasn’t sure if we’d be able to get a bow and arrow set through customs. The next day as we drove through a nearby town, we saw two of the boys walking around in t-shirts. The day before, the men had all been decked out in ragged shorts and little else. Maybe some beads and animal hides, but no shirts. Had they dressed down for our visit?

Even today I wonder if we were getting a genuine look at the Hadza way of life, or if most traces of “Western Influence” were carefully tucked away when tourists were around. There may have been evidence of trade with other tribes (such as the arrowheads we saw the Toga tribesmen forging), but I’m curious what the Hadzabe use the money from their souvenir sales for.

Regardless, there was a lot we experienced that morning that could not be faked. It was a privilege to witness the hunt first hand and see how this tribe works hard to survive in such a challenging environment, and I remain thankful for their hospitality. I’d be curious to see how things may have changed since then. In less than a decade-and-a-half, has modern technology seeped into the tribe’s lifestyle as it has elsewhere around the globe? Maybe some day I’ll have a chance to document a return visit.

See more from the hunt and the rest of the Rwanda & Tanzania 2007 Culture gallery in the photo archive.

After I published this story, I found this National Geographic article from 2009. It contains a lot more interesting information on the Hadza.