A week after driving home from a wonderful family trip to our cabin and the park (barely any photo exploration, and it was family time, thus no trip report), I returned to Yellowstone for some time behind the lens. I didn’t feel like driving again, so I flew.

It was my first time flying since the COVID crisis began at home, and I admit I felt a bit of trepidation. But overall things went smoothly (check back in two weeks to see if they actually went “well”), and everyone on our plane adhered to airline rules throughout the flight. One interesting thing to note (non-virus-related) was that the flight between Seattle and Bozeman is now on a small jet rather than a prop plane… which saved my bacon in terms of carry-ons. Though I had left a suitcase full of clothes and supplies in Silver Gate, I was still hauling more than normal on the flight over.

What a difference a week makes. No line of cars at the gate, and the northern range was sooo quiet compared to the trip earlier in the month. For example, the whole time we drove the Slough Creek Road, we were the only car on it.

Wildlife-wise, the Lamar Valley seemed quiet as well. The larger bison herds had dispersed. No signs of pronghorn, coyotes or other critters. Perhaps that would change when we ventured out for our first day of genuine exploration.

There was one photo shoot to report. As we pulled up to the cabin, we were greeted by a grouse! Our previous guests had reported a grouse on the premises, and apparently it stuck around for us. I expected a Ruffed, the species I normally see in Yellowstone’s northeast, but it was actually a Dusky. 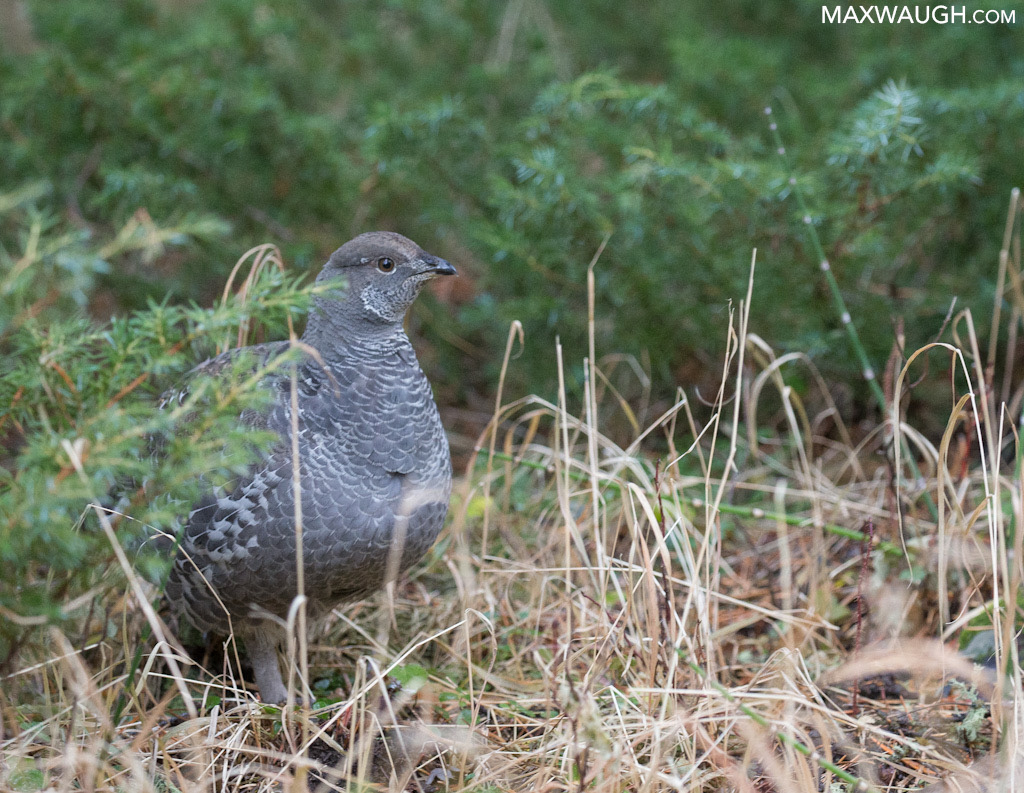 This is actually the first grouse I’ve ever seen on our property. One thing you always have to remember about Yellowstone: every visit produces something new and different!

There was no real plan today. I’m shacking up with a past client who is renting one of our cabins and invited me out, so we’re both park veterans with no urgent goals stressing us out.

But an owl would be nice.

We entered the northeast gate under a smattering of freezing rain. The forecast for Silver Gate called for cold and snow much of this week, but there’s no telling what that means for the rest of the park. As it turned out, it was our only precipitation of the day.

The initial drive offered up sightings of scattered bison and the occasional pair of ravens. Halfway to Mammoth, we had two bull elk just above the road. We were able to find a pullout and photograph one of them in some slivers of warm light that were peeking through the cloud cover.  A nice way to kick things off. After that, we rarely had any lulls.

At Golden Gate, a lone mountain goat was lying down on the far slope. Presumably something we could check on later in the day. At Swan Lake Flat, Swan Lake had… swans. Lots of them, in fact. I’ve never seen more than one or two pairs at a time here. This time, there were several. Also, there was the ubiquitous Pullout Raven. This one posed in front of Antler Peak. 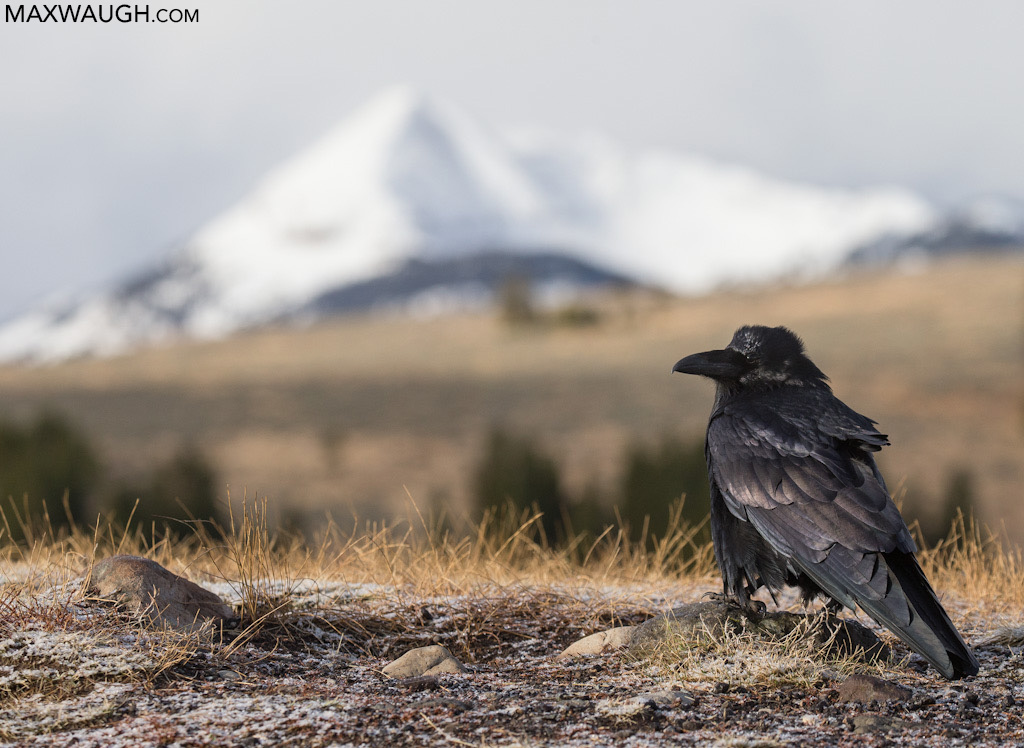 We drove south. Owls really were a goal for us, as they’ve been seen off and on in recent weeks (the one day I made it down to the lake during my family trip was the one day they weren’t seen). On the way, we saw two coyotes in Hayden Valley.

It didn’t take us long to find an owl. Folks were pulled over photographing a Great Gray. Finally. It seems like it’s been a two or three years since I photographed one at close range in the park (I did have one in Manitoba earlier this year). This one perched for a while, hunted twice unsuccessfully, and then flew off into the woods.

We ventured out to the east road to do a quick bear check and stop for lunch at Lake Butte Overlook. A Bald Eagle was carried by strong winds over us at one point. On the way back to the west, we stopped to photograph bison, and discovered a flock of ravens picking at a, well… it was mostly just a pool of blood and a lot of semi-digested vegetation. Bits of fur scattered about indicated that it probably had been an elk. But any carcass that had been there had vanished, likely hauled away by the park service.

I suspected that our break might give the Great Gray a chance to pop out in another meadow… and let someone else do the hard work of finding it. Sure enough, a new crowd of vehicles had formed at a different meadow. We ended up enjoying a prolonged shoot with the bird as it scoured the long autumn grasses for food. 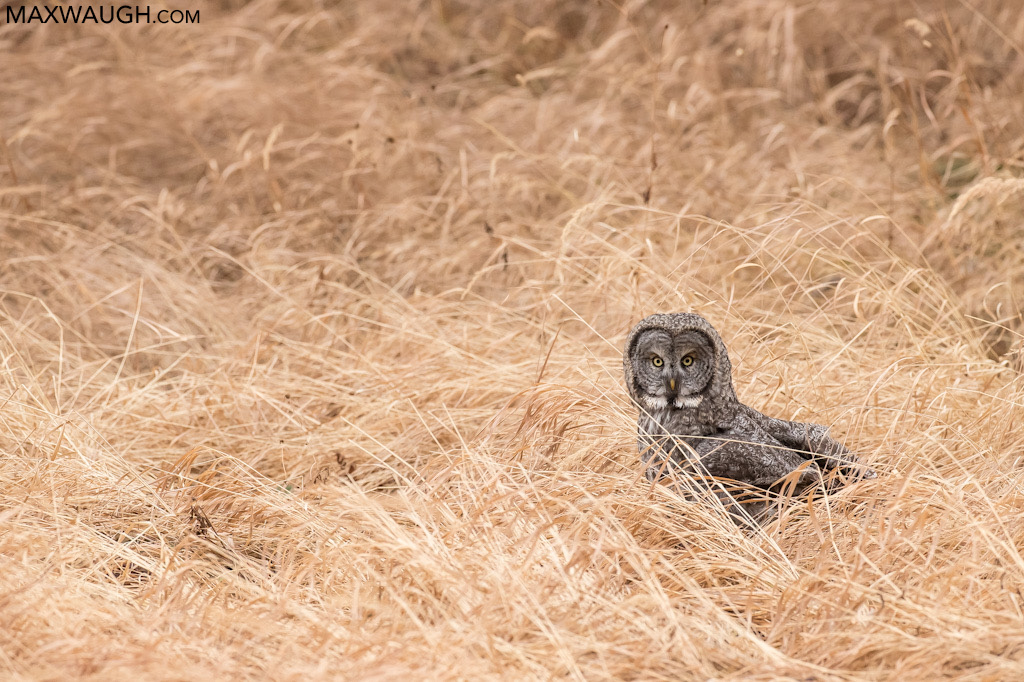 Not quite the same as roaming the woods and finding one on my own, but still a lot of fun.

There was still a fair bit more photography left in the day. After checking a couple spots to the south, we began the trek north, stopping at LeHardy Rapids. Of course I didn’t expect Harlequin Ducks at this time of year, but I’ve also had pelicans, others have seen otters… you never know what might show.

In this case, Canada Geese provided the highlight. They were wading in the rapids, snagging aquatic vegetation off the rocks. 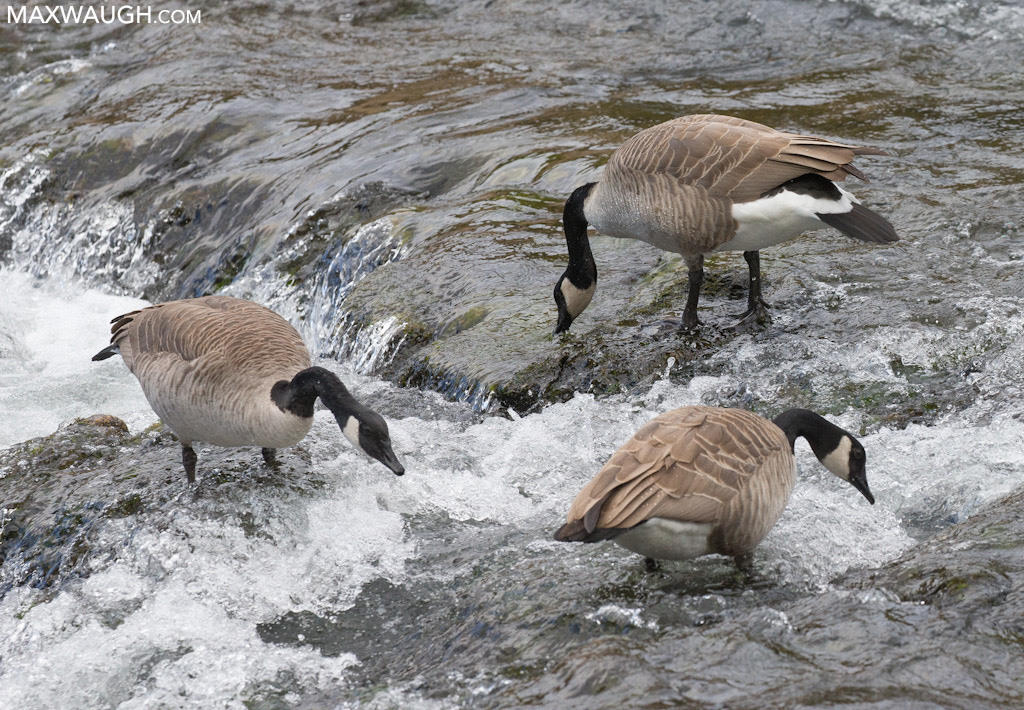 This was another new sight for me. Between the white water geese and the unusually cooperative Dippers, a lot of time and frames were expended here. The thing about LeHardy is that the photography always seems to be fun, but I dread processing all the photos later, since I end up experimenting a lot with different compositions, focal lengths and shutter speeds. I already know that I’ll be wading through a ton of failed images from this shoot.

On the way home, I stopped briefly to… order a new camera (which will hopefully arrive before my trip ends… what better place to test new gear?). We stopped at Golden Gate again for the mountain goat (this time it was way down by the creek), and took a few shots of ravens perched on the colorful cliffs.

And lest you think I only have bird photos to share in this report, we did pause to snap a couple quick photos of one of the big Mammoth bull elk as he tended to his harem. 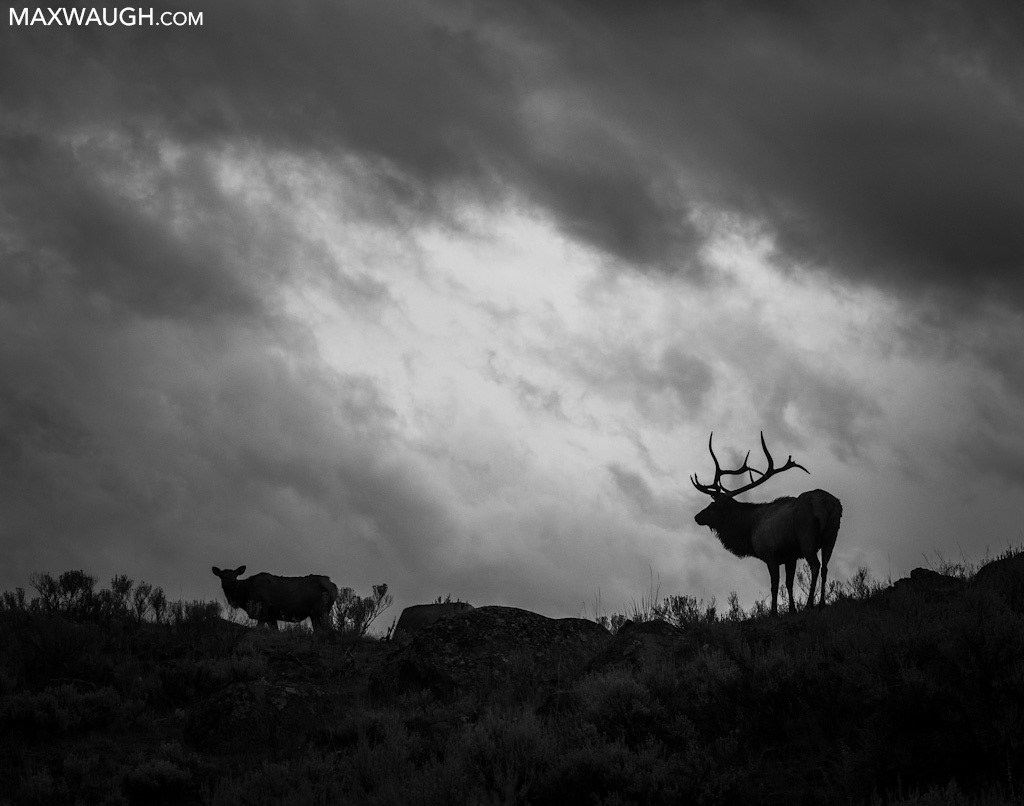 The rest of the drive was quiet as darkness descended. A coyote scampered across the road in the Lamar, and what we think was a grouse flashed through the air in front of the car on our drive through the northeast.

Yellowstone Fall 2020 Trip Report, Days 2 – 3
Wildlife Photographer of the Year: Thoughts on a Tayra in a Tree