The first thing I did on Wednesday morning was put on my shoes, tromp through 3 inches of fresh snow and brush off the internet satellite dish to reestablish our connection. You may scoff, but No Internet = No Trip Reports!

Silver Gate is always lovely under a fresh blanket of white stuff, even if it’s a thin blanket. It even allowed me to see where the fox had snuck past the cabin during the night.

We got an early start. Early enough that the snow plow had not even begun working to clear the highway. So it was slow going a fair ways into the park. By the time we reached Pebble Creek, the icy mush turned to a light dusting, and we were able to pick up our pace. The idea was to get down to Hayden Valley and the Lake a bit earlier than we had on Tuesday. Maybe an owl again, but why not wolves?

No really, why not wolves?

Before we even reached Hayden I spied some familiar vehicles and faces pulled over. They had to be waiting for the Wapiti Lake Pack. We pulled over to confirm this info with a fellow park regular, and I walked over to say hi. Just as I was about to return to the warmth of the car, she spotted them, coming out of the trees.

In the lead was a light colored gray wolf. This past winter, I had seen a lighter colored gray among the pack. Perhaps this was the same one. It still sported dark and gray fur up top, but the body is already bright white. I recall this is how its grandmother, the Canyon Alpha Female, looked at a younger age. Though not yet stark white like the previous three generations of alpha females in its line, perhaps this was the next white wolf of Yellowstone (note, she’s not in the photo above, though some of those wolves also look a bit lighter).

Others followed. A couple of grays, some blacks. Then, howling back from the trees. The wolves ran back to the south, where they reunited with some of their packmates to have a barely visible romp in the forest. Then they re-emerged. The lone light gray stayed on the far side of the meadow and waited for the rest to catch up. Three more grays. Three blacks… and the white alpha female. They marched northward.

We weren’t sure where they were headed, but in these moments you take a calculated risk in hopes of catching a better view ahead. The wolves were gathering in a draw as we drove past. Perhaps we could have stopped and maybe snapped some photos before they kept moving, but it seemed risky. Instead we drove ahead to the next opening in the trees.

The gamble didn’t pay off. It turned out the pack turned and went up the draw away from the road. A bummer, but nobody could complain about starting the day this way.

After checking a few other spots (in case the wolves reappeared down the road), we resumed our trek southward. Just entering Hayden Valley, we spied a bison herd marching toward the Yellowstone River. They began to cross. 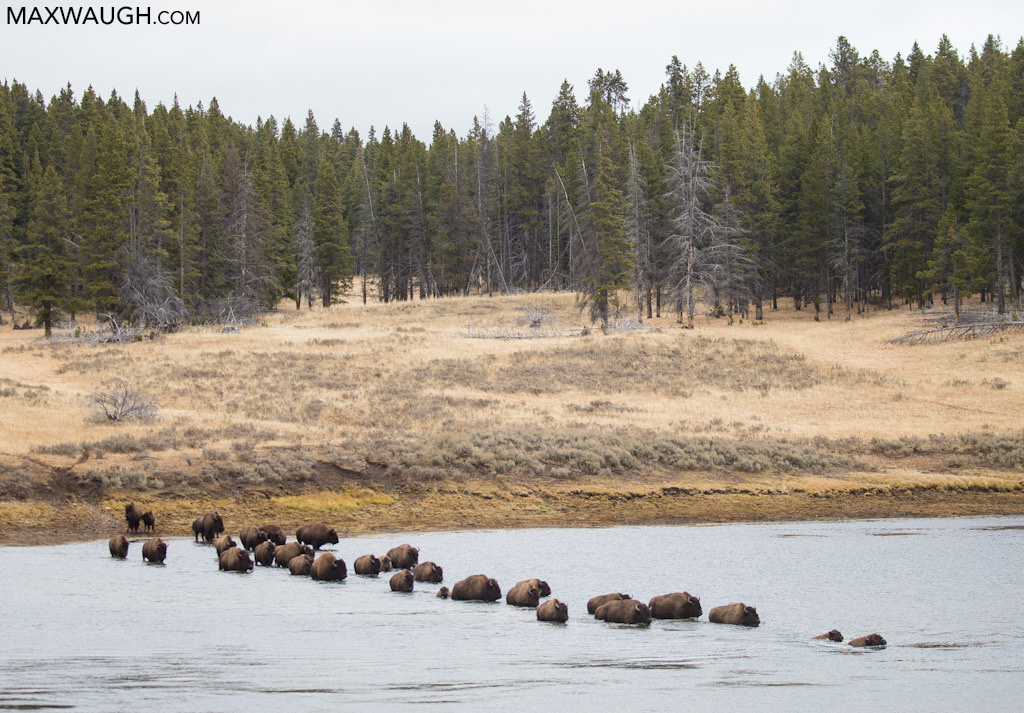 It seemed like a relatively easy wade across in the shallow waters of the Yellowstone, until they got to the 3/4 mark. Then the bottom dropped out and the bison had to swim the rest of the way, sporting that bug-eyed look they get whenever they do so. 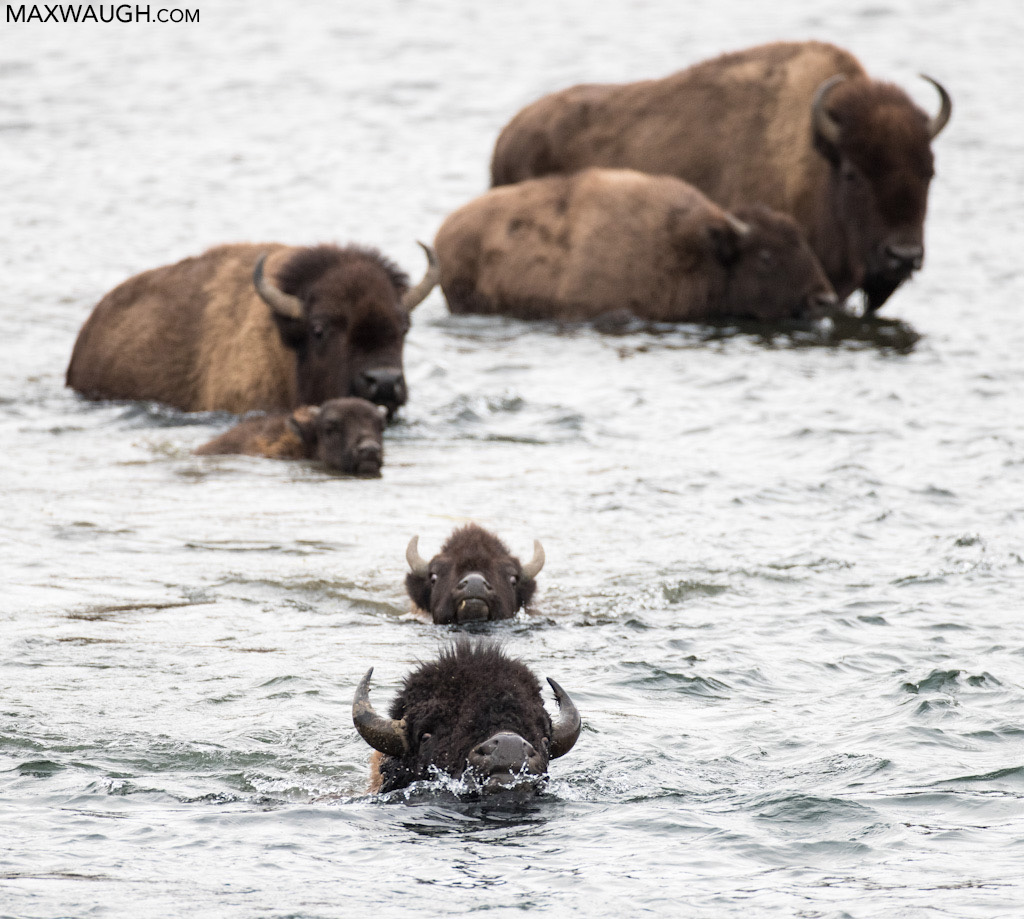 After they crossed, we drove on. No owls were out at the moment, so we made an impromptu decision to go on a hike. We chose Elephant Back, a new trail for me. On the trail we saw signs of deer, coyote, marten, bison, raven, and a few other hikers. But red squirrels were the only creatures that came out to say hello. Near the top, we were afforded some nice views of Yellowstone Lake, which was bathed with alternating swaths of shadow and light. 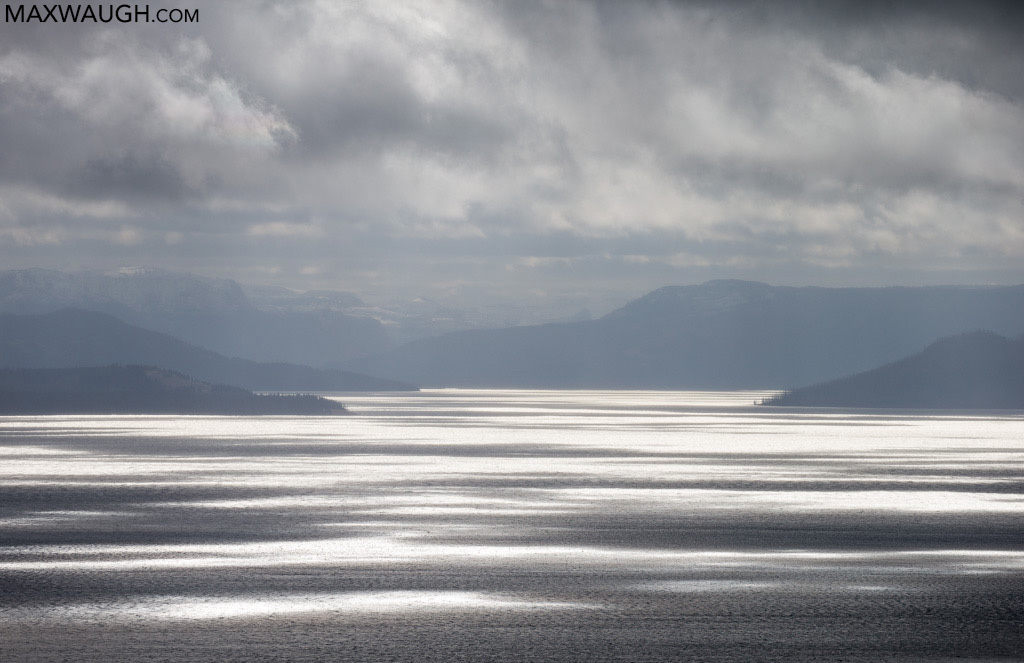 We survived the hike, and then headed down to Bridge Bay for a quick lunch. By this time, a bathroom break was needed, and the bathrooms at Bridge Bay were closed. So we had to find the next closest facility. That happened to be at Gull Point Drive.

Best Bathroom Break Ever. Or at least, of this trip, I’m sure.

After business was concluded, my companion (who has a well-earned reputation as an eagle-eyed spotter from my past tours) spied something out the car window. I looked out, hoping for a marten (Gull Point seems like ideal marten habitat)… but no, this was too small. A squirrel? Something about the coloration wasn’t right. It was almost… caramel colored. 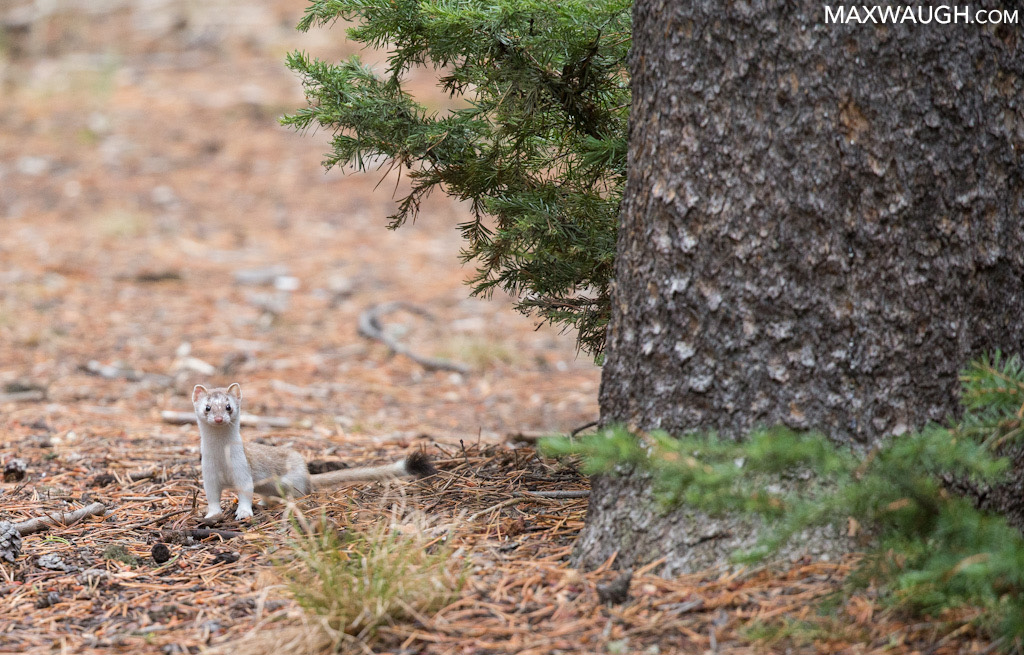 Whoa! A long-tailed weasel transitioning to its winter coat! Remember, Kids: Yellowstone always gives us something new. This was another first for me, as I’ve only ever photographed weasels in either their brown-and-yellow summer or white winter fur.

Even better, it climbed a tree! Not a first for me, but my first weasel-in-tree photos. 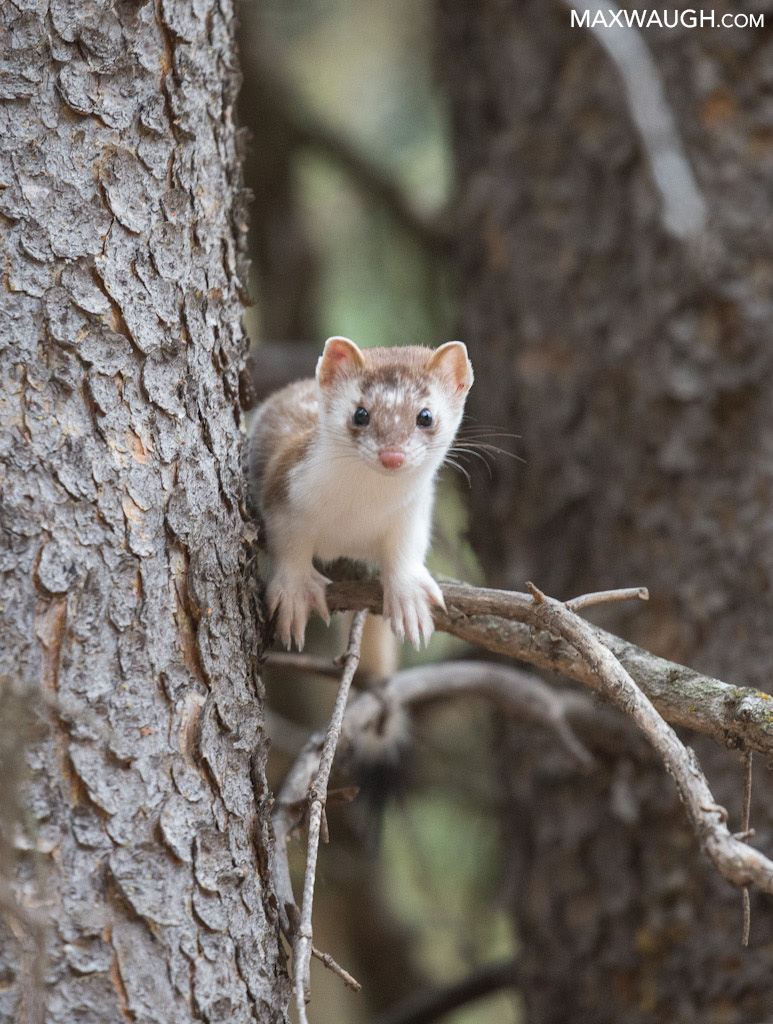 What a great find, and such a sweet unexpected surprise. We had clinched another great in the park.

Back at the cabin in the evening, we started to receive a flood of notifications from the park service indicating that various stretches of road in the park were closed to overnight travel. Soon, it seemed as though nearly every road was going to be closed due to an impending winter storm. So the question was, would we be able to get in at all on Thursday morning?

The last message we received overnight confirmed that the entire park road system, with the exception of the Gardiner – Mammoth stretch, had been closed. No notifications in the eight hours since that message, so we geared up as usual to go and check. After brushing five new inches of snow off the car and scraping the windshield, we piled in and headed down to the northeast entrance. 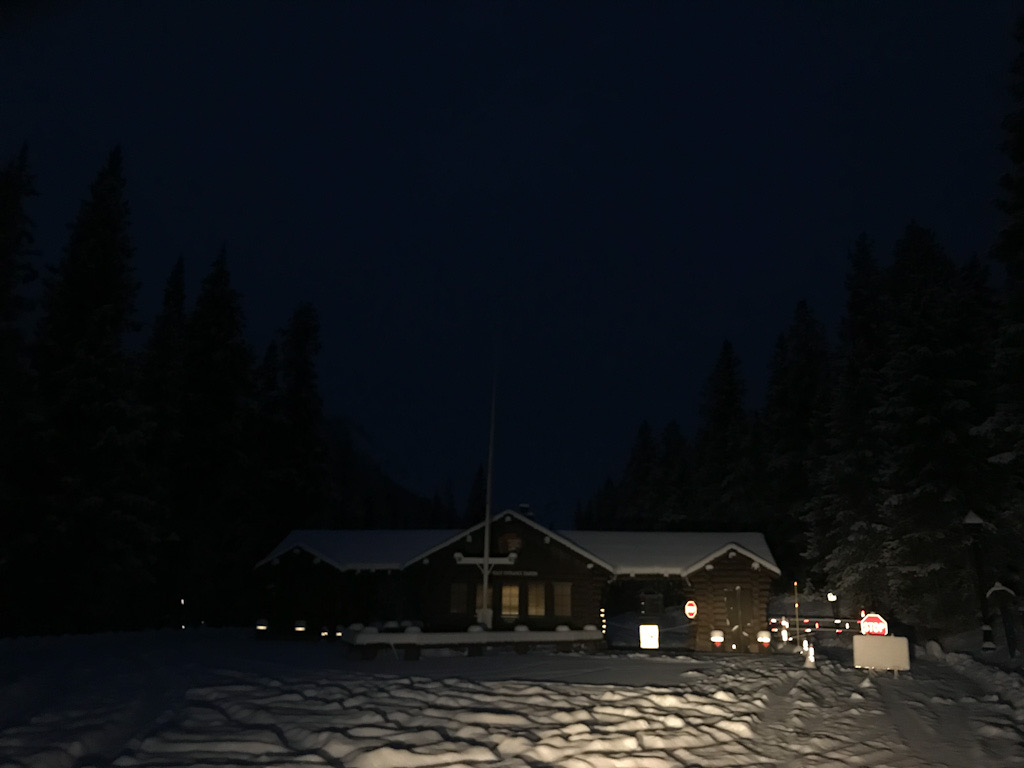 Sure enough, everything was closed, and once again the plow had not been through yet (even an hour later than the previous morning). We had no choice but to return to the cabin and wait for further alerts.

On a side note, it’s a good thing I didn’t have a flight home today!

We returned to the cabin and waited for it to get light. After an hour, we decided to go for a drive. As we reached the end of the driveway, a truck barreled down the road past us at high speeds.

Maybe one more check of the park gate, just in case they’d opened up? We reached the highway and drove to the edge of town, where we were greeted with a sad sight. 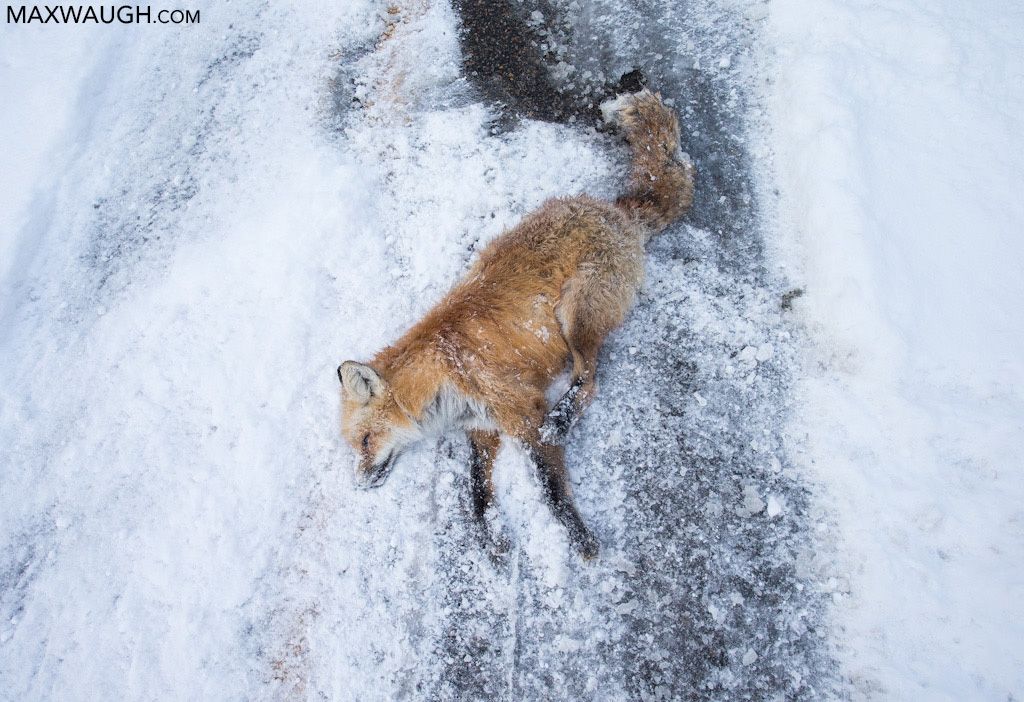 This was presumably the same fox that made frequent forays onto our property at night. And now it had met the fate of so many other foxes in the area. Folks drive at high speeds all too often around Silver Gate (we had just seen one example on the side road running past our property!), and often times the foxes pay the price.

I didn’t want to leave it in the middle of the road, so I dragged the fox off to the shoulder. By the end of the day, it was gone.

The gate was closed of course, so we turned around and continued up past Silver Gate and Cooke City. The road to the Chief Joseph Highway remained open, at least, even though it had not been plowed. We carefully drove up through some spectacular winter scenery for several miles. 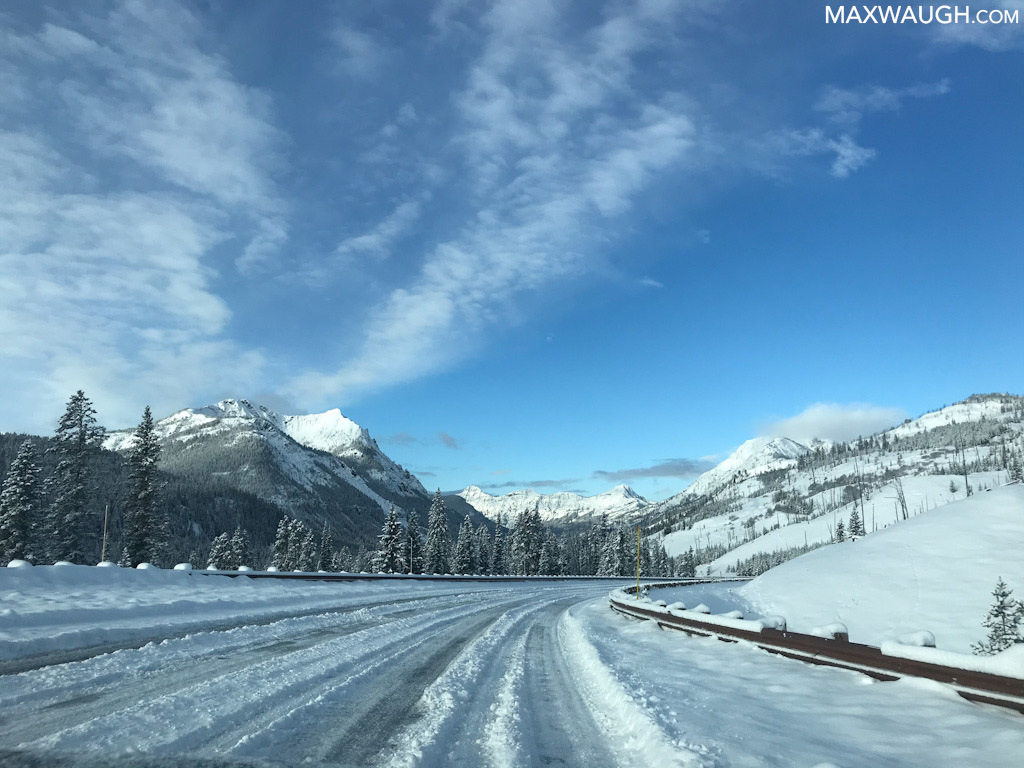 Though we saw a lot of tracks (mostly canid), the only creature we saw was a Steller’s Jay.

Returning to town, we made one more check on the gate. At this point a line of vehicles was beginning to form outside the gate (which was not manned, simply barricaded). Locals had tried calling the park service for an update, but there was still no news on when we’d be freed. Which is all a bit odd. Normally the park service is on the ball when it comes to plowing the roads and keeping access for Silver Gate and Cooke City residents open. But who said this was a normal year?

There was nowhere else to drive, so why not go for a short hike? We walked down the driveway—a bison stared at us from the neighboring property—and went up to the Bannock Trail. We shuffled through deep snow down the trail. Blue skies and snow-capped peaks shone above marshmallowy pine trees. Simply beautiful. 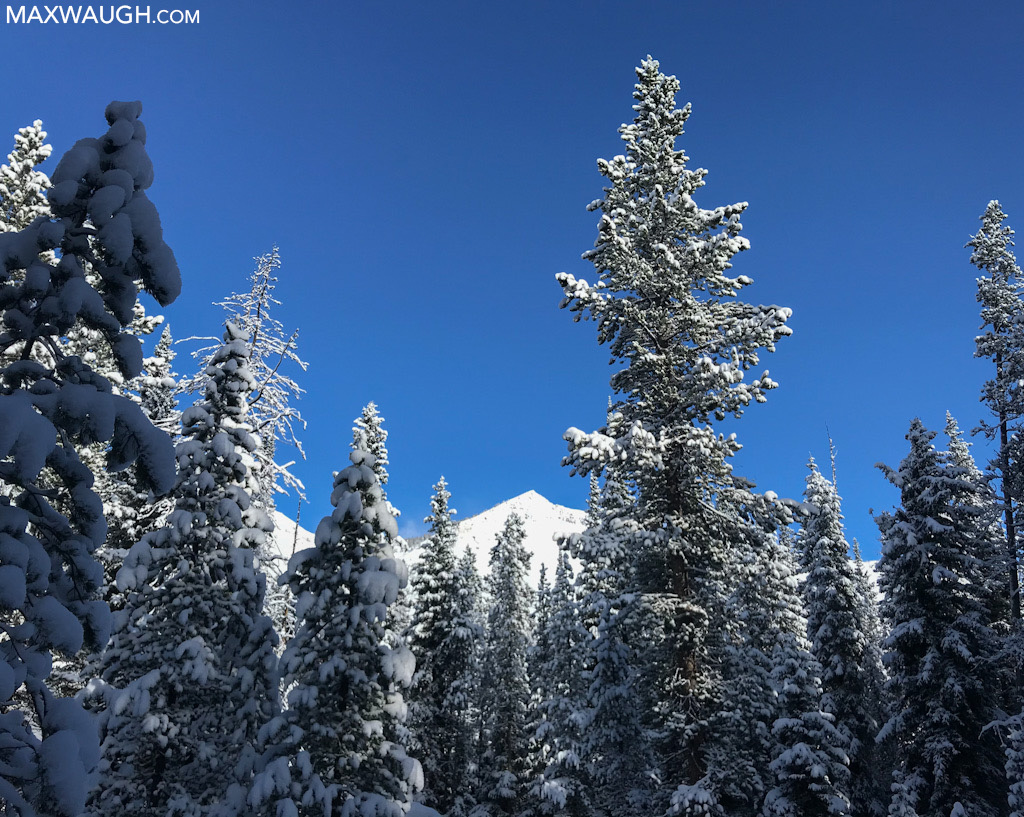 Of course, I wasn’t really wearing any winter gear, and once we reached a small creek, we weren’t about to try to hop across icy rocks or a rickety log “bridge” someone had laid. So our hike didn’t last much longer than an hour. Still worth it for peaceful scenery alone.

Back at the cabin, we finally got word that the park had re-opened. But by then it was closing in on lunch time, and I had some work to attend to. So our return to Yellowstone would have to wait a couple more hours.

When we finally made it in, our clear blue skies had largely disappeared. We noted several wolf watchers packing up at Slough Creek.

Past Elk Creek I noted a few more wolf watchers pulled over. Based on where they were aiming their scopes, anything in their sights wouldn’t have been miles away. I looked out and spotted a dark shape on a bluff, so I pulled over at the next turnout. It was… a grizzly bear trudging through the snow. Kinda cool to see, even beyond photo distance, and our first bear on this visit.

We drove on toward Hellroaring. The drive down to the Hellroaring trailhead wasn’t coned off and looked drivable, so we gave it a try. We were the first human visitors of the day. I wanted to see if we’d luck into an autumn pika in the snow. Unlikely, but with all the snow it might make for a spectacular photo op.

All was quiet, beyond a couple of distant Clark’s Nutcrackers. We carefully picked our way down the trail, checking the snow-covered rock piles for any fresh tracks. Down at the lower pile, I did actually spot a set of tracks winding over the white lumps, but it didn’t go far. So the pikas had been active, for one quick dash outdoors, at least.

Back at the road, we started to backtrack. At the Petrified Tree Drive, a distant coyote disappeared over a hill. We drove on to Slough Creek. I wanted to drive the full road. Halfway down, we walked down to a pond, where a muskrat made a couple of brief appearances before disappearing beneath water that was slowly icing over.

At the end of the road, a herd of bison wandered up through the sage. Mostly cows and dark brown youngsters, so we didn’t think much of the encounter… until a Little Red Dog appeared in front of us. 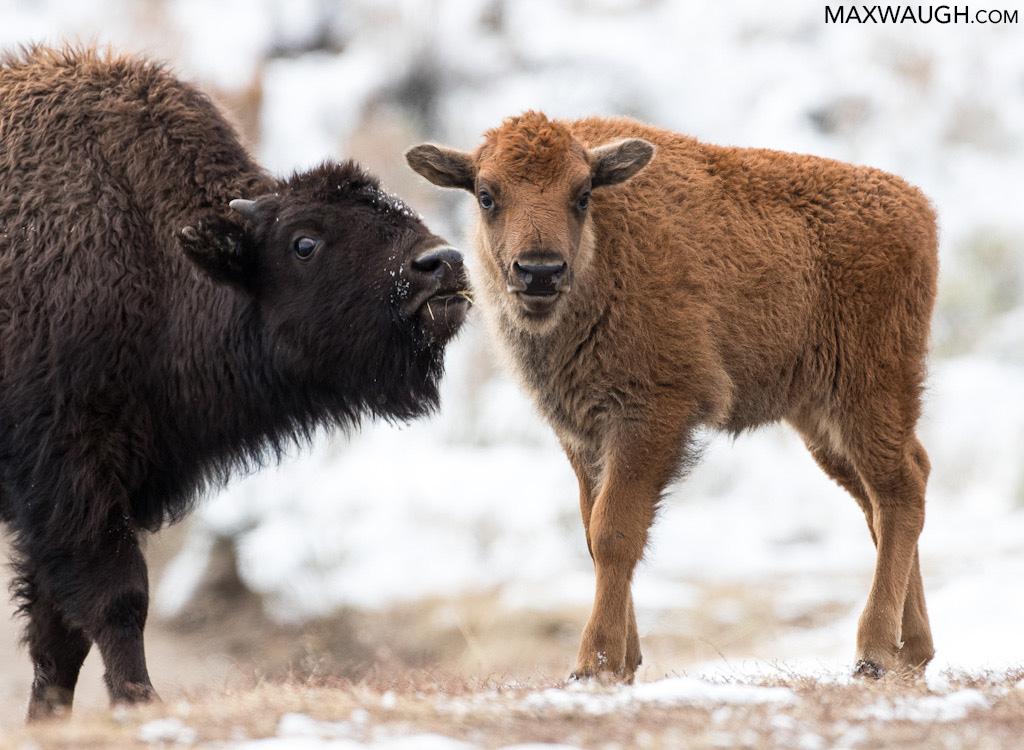 We’ve seen a few “out of season” calves so far on this trip, but this was by far the youngest. While we were snapping a few photos of this little one, a couple of teenagers got in a tussle nearby. 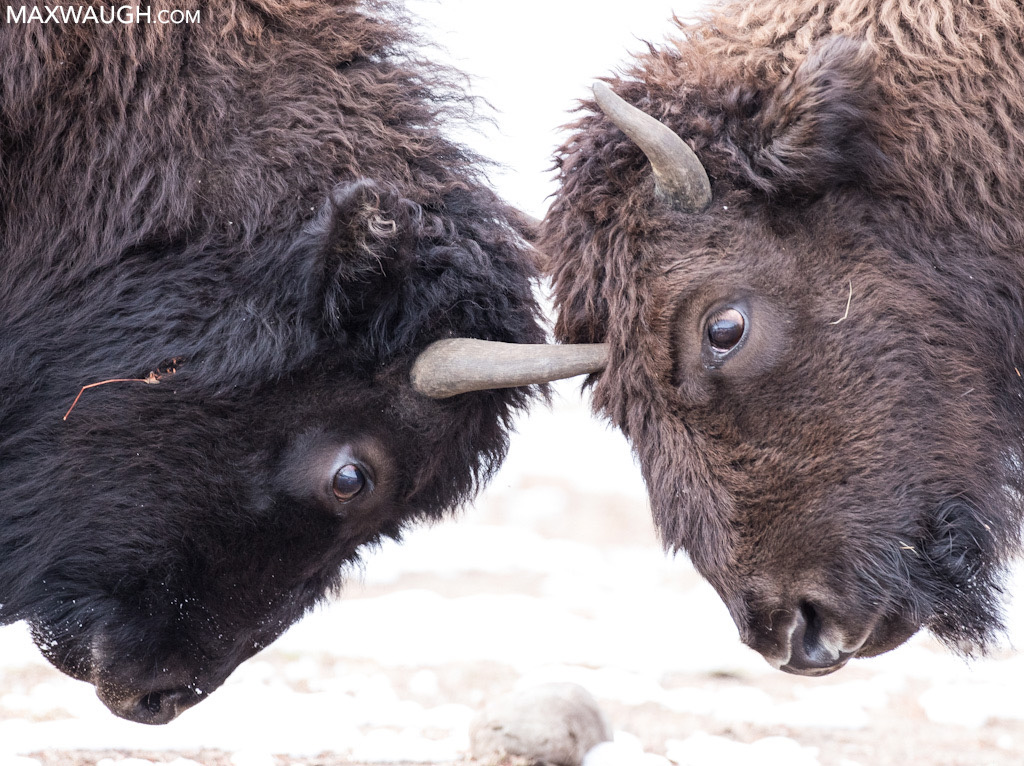 Not a bad bison shoot after all! It ensured another solid day for us, but we weren’t quite done. Before we made it home, a fox popped up near the road just outside the park entrance. 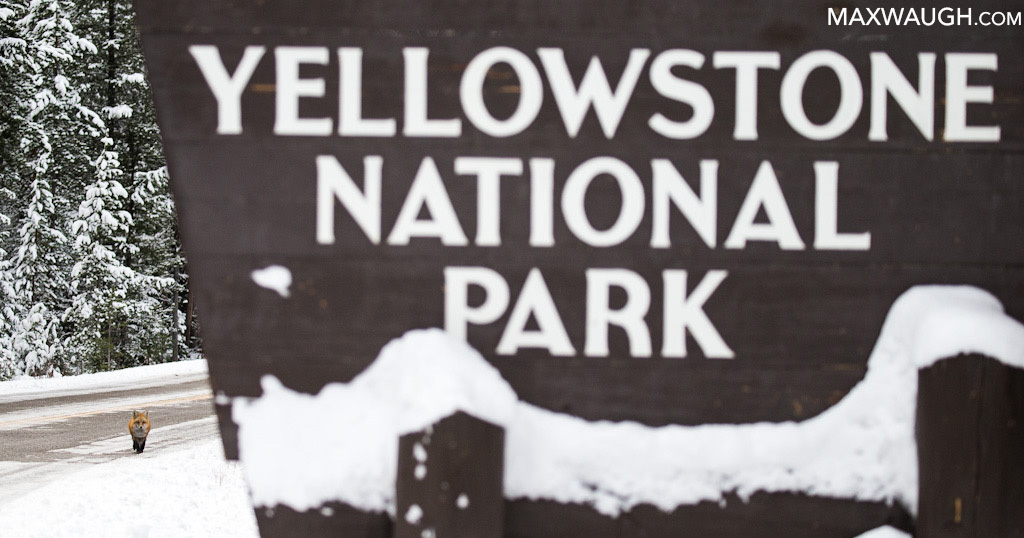 This fox looked smaller and a bit younger than the one we found this morning. We left it just outside of town. Given how our day started on such a morbid note, this seemed like an appropriate way to end it. If it ultimately decides to take up residence locally, hopefully this cute little fox can continue to stay safe on the roads. 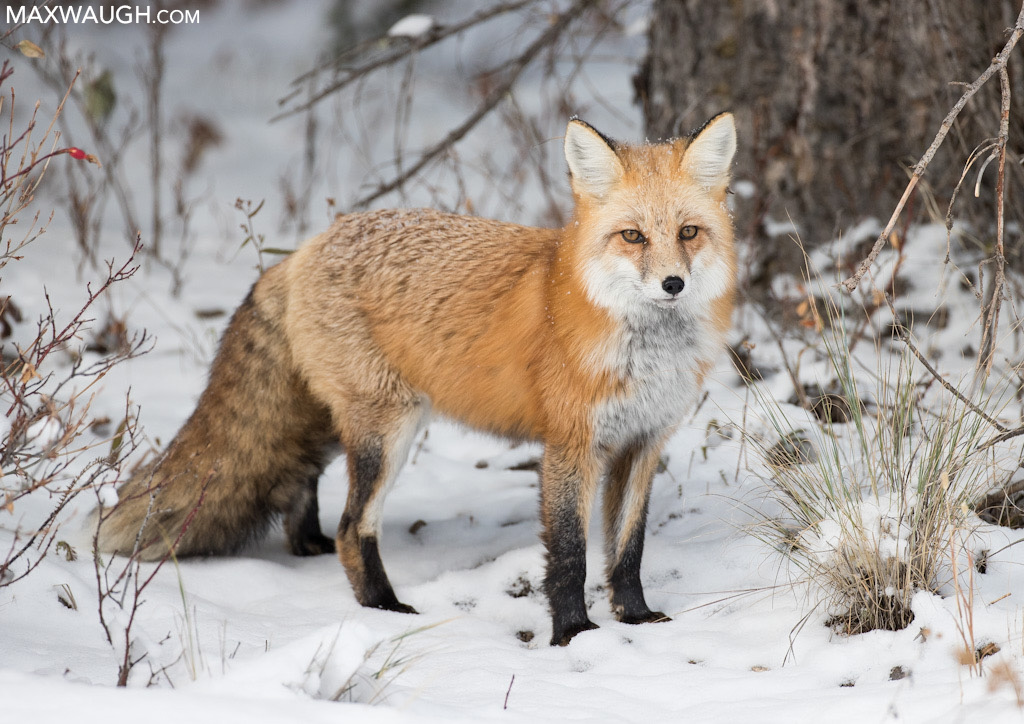