Friday was one of those Let’s See Where the Road Takes Us kind of days. No super early start… just get into the Lamar and see what happens from there.

No snow overnight, for once (don’t worry, that is going to change), so the roads were clear and safe. Boy, the valley was quiet. We were one of maybe three vehicles occupying the stretch from the northeast gate to Slough Creek. Even Slough lacked its usual crowd. The wolf watchers must be stationed farther west, we figured, and sure enough, clumps of them materialized in the Hellroaring area.

The sun was fighting through the morning cloud cover when we descended into the Phantom Lake bowl. I spied an animal on the road in the distance. It was a fox, likely the same one I’d seen a couple times a little bit to the east during my visit earlier this month. That fox had been pretty skittish in the presence of vehicles, so it wasn’t surprising that this one immediately began climbing the steep hill above the road. 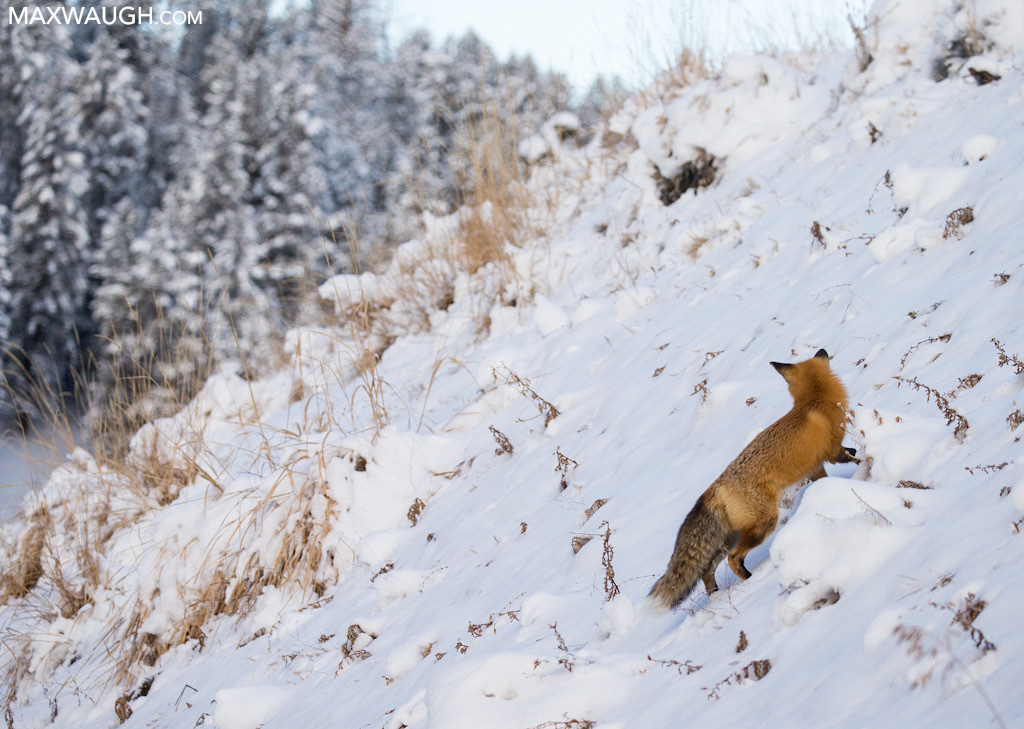 It didn’t wait for cars to pass to come back down, it simply kept going up until it was out of sight.

I forgot to mention that this was the coldest morning of the trip so far. By the time we hit Blacktail Plateau, it was down to 3 degrees (F), and the open hills were sparkling in full sunlight. Plus, a massive herd of bison was roaming far and wide. When we looked back, I could see ice crystals (“diamond dust”) in the air. Bison were rimlit and the whole scene was sort of the magical. The only problem was that the bison were in the wrong place to get good angles for photos, and there wasn’t a convenient place to park.

It took some effort, but we eventually slogged out into the field a short ways, hoping something would come together. It never quite did, but we tried our best to delicately set up in places that wouldn’t disturb the herd. 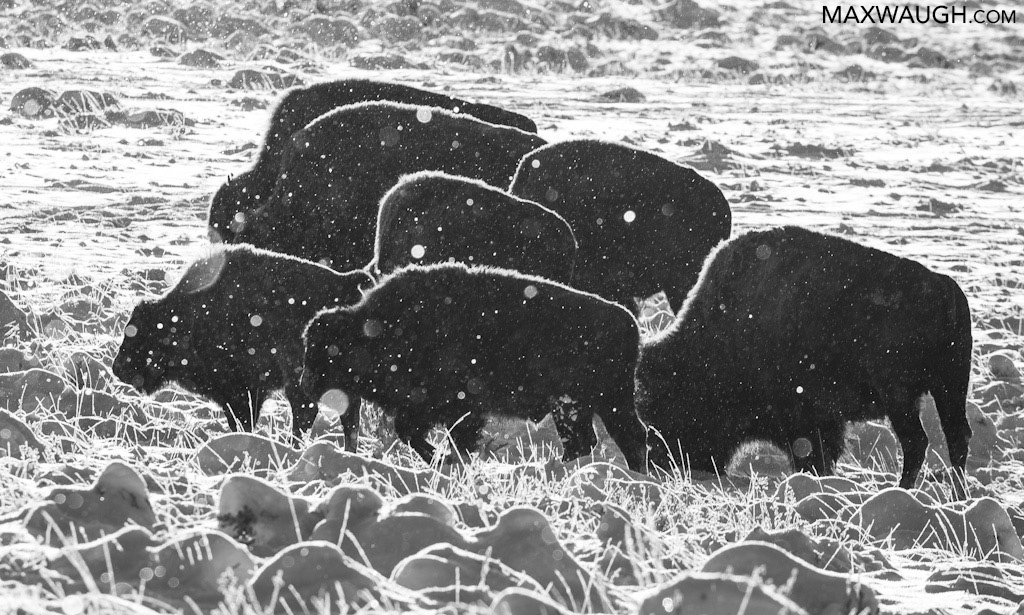 The road took us west, and then south. After fueling up on hot chocolate at Mammoth, we stopped briefly at Norris for a couple more bison (which were also in the wrong place). Then east to Canyon and south again. We finally stopped for an owl jam. A Great Gray was perched near the road, but if there had been a show this morning, we had missed it. It was looking pretty sleepy. 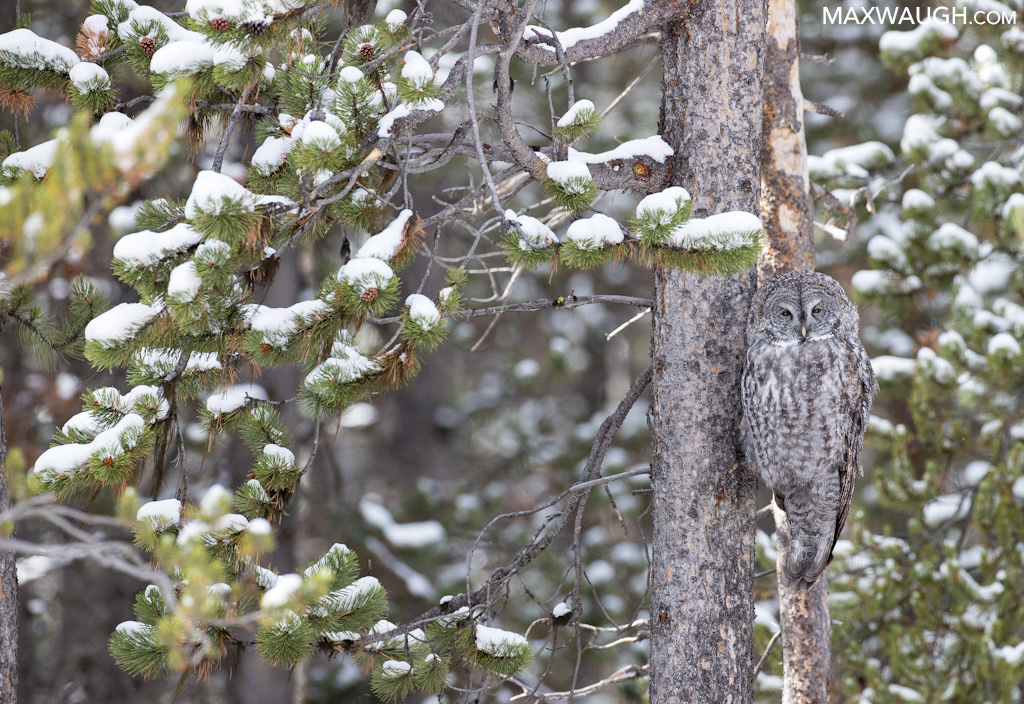 There was no indication that it would perk up any time soon, so we kept moving. We were already closing in on lunch time, amazingly, so we opted to return to Gull Point, the site of our amazing weasel encounter. There was wildlife in the picnic area when we arrived. The feathered variety.

Steller’s Jays (<— Note: “Steller’s,” not “Stellar”), Clark’s Nutcrackers, and Canada (née Gray) Jays were hopping all over the snow in search of food. Believe it or not, these are three relatively common species found in the park that I don’t have many good photos of (my best Nutcracker shot is from 2004!). So yes, I was excited about this opportunity. I grabbed the big lens, not wanting to spook the birds as they foraged (hunted?), but it was pretty tough trying to hone in on them as they hopped and flew from branch to branch, down to the ground, and back up again so quickly. Three different species, not actively coordinated, but all co-existing as they went after the same food. But what was it? Seeds, or perhaps bugs? I’ve seen magpies picking insects off the ice along rivers before, so it’s possible the fresh snow was sending some tiny morsels scurrying (and against snow, perhaps they’re more visible to predators). Watching the scene unfold, we couldn’t get any sense of what they were after. Perhaps the photos would provide a clue. Believe it or not, I may have solved the mystery... 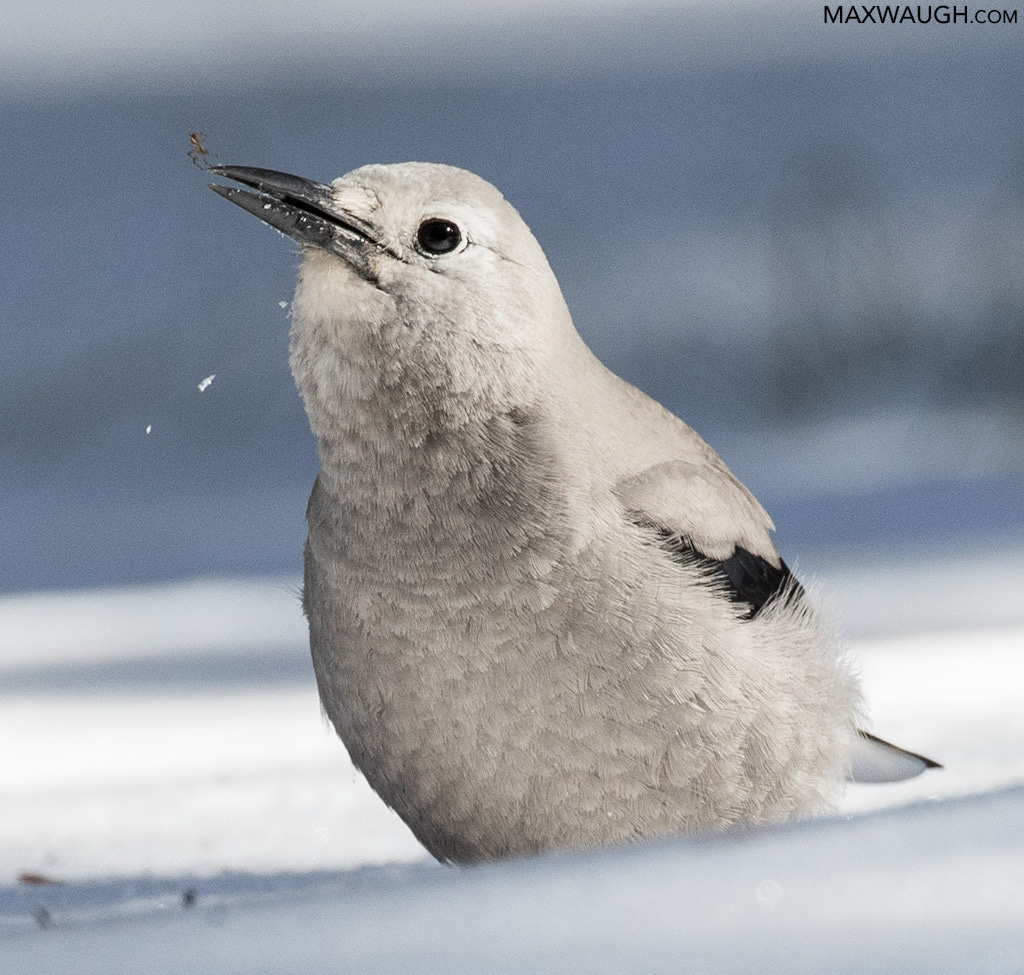 Spiders! Wow, didn’t expect that. I got photos of both a nutcracker and Canada jay pursuing or chomping on a spider, so I’m fairly certain that was the snack of the day. Remarkable. Gull Point provides another First.

The ground was littered with tracks. Mostly bird prints (three-toed feet and the occasional wing impression), but also squirrel and mouse tracks. Could we find ermine tracks that might lead to a sighting? After lunch in the car, we went to find out.

Though we did eventually find ermine tracks, pine marten tracks occupied most of our attention. We followed them for some ways (they even went down to the lake shore… can you imagine that photo op?). Along the way, I was entranced by the beauty of the place. Sparse forest, a soft carpet of snow, and an occasional shower of snow and ice crystals blowing out of the trees in the midday sun. 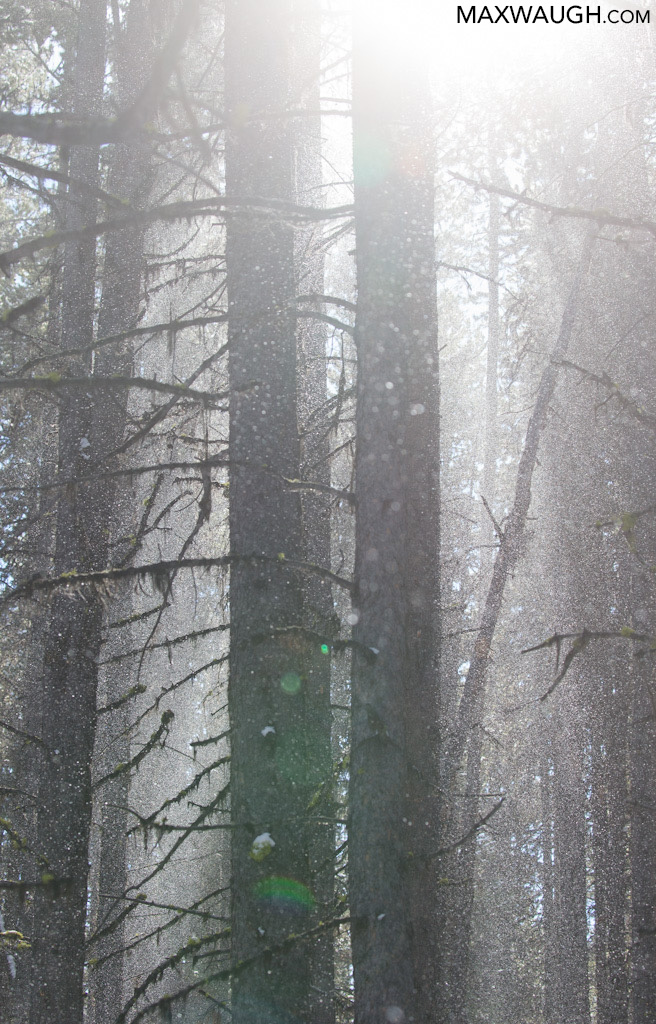 All ruined by the lack of weasels and martens. Just kidding.

We didn’t have any luck on the mustelid front, so we packed up and began the trek north. Back at the morning’s owl spot, there was an even larger crowd. We could see that our Great Gray had not moved. Sleepy indeed (or perhaps frozen in place). Ignoring the random woman walking within 10 yards of a massive resting bison on the other side of the road, we went to see what the rest of the onlookers were focused on. A short ways away, another Great Gray Owl was perched in a tree. Find the best weed seeds amazon online. Only the best quality autoflowering, feminized and other cannabis seeds. Wow.

It actually looked just as drowsy as the first, so we packed up just as a ranger arrived to urge everyone to give the wildlife a break in light of the impending storm heading in later in the day.

We weren’t quite done thinking about owls. I suggested visiting the Canyon meadows to tromp around in the woods for a bit. It was fun, even if we didn’t see any wildlife. Loads of marten tracks teasing us again, and we even followed some moose tracks for a bit (they were on the trail we were taking, we were not actively tracking moose). No signs of owls or, thankfully, bears. And I know it’s a common theme in these reports, but it was lovely back in there.

The drive north involved a detour to Gardiner for an early dinner and some restocking of supplies. The drive back to the northeast corner was largely uneventful. Two coyotes on the floor of the Lamar as light began to fade, and then a fox passed us on the road near Pebble Creek. We waved to our local bison as we went past down the driveway.

Everyone kept talking up a major storm overnight. We got maybe three inches of new snow. Since we weren’t sure if the park would surprise us with a closed gate again, we didn’t even set an alarm. Didn’t matter. Awake before 6. But we took time to cook a real breakfast, and went in around 8am.

The real winter storm, at least for the northern range, consisted of lingering haze, wind, and mild snow throughout the day. It made wildlife spotting tough. This morning was definitely the slowest half-day we’ve had so far. I think I snapped a few photos of one blustery bison, and that was it. 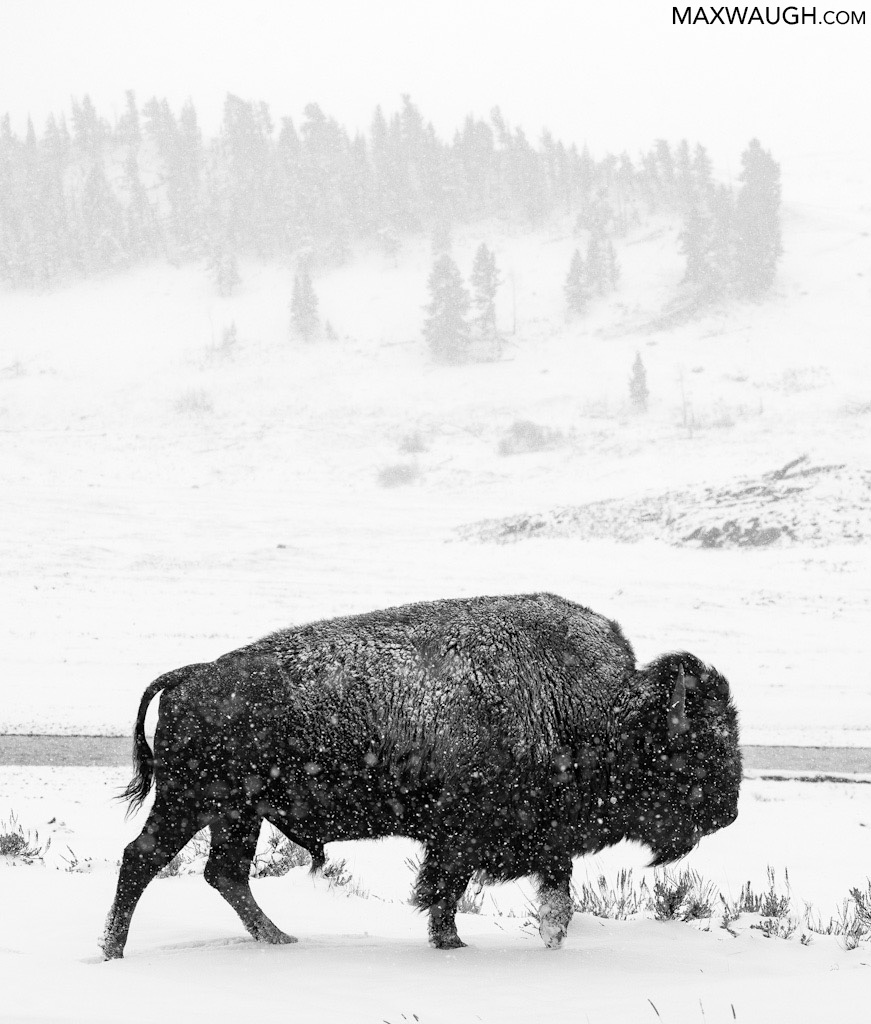 After lunch back at the cabin (and a romp through the snow investigating possible marten tracks), we headed back in hoping for better luck. It took a while, but we eventually got it, starting with a few coyote sightings.

Also, Horned Larks! It’s not a bird I see often in the park, especially in the Lamar Valley or Little America, but we had a couple sightings as they pecked and hopped about picking at grass stalks near the road. But wait, what I thought were simply juvenile Horned Larks with the more familiar-looking adults were something else altogether. Thanks to the Yellowstone Birding Facebook group, I’ve been able to ID these as Lapland Longspurs! A new one for me. 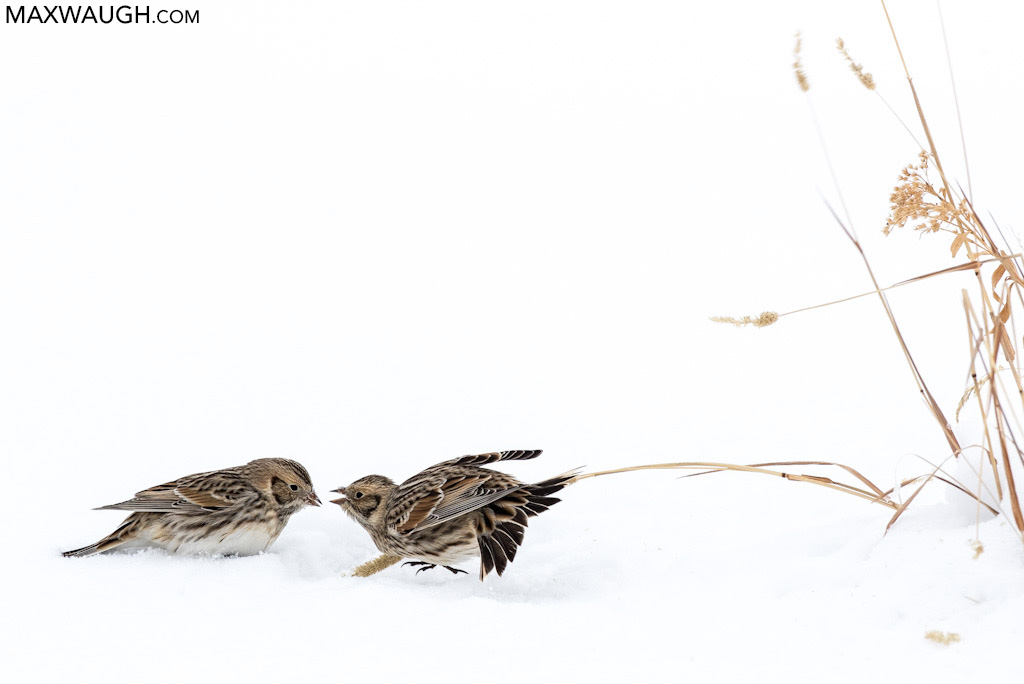 I’ve had a few uncommon bird sightings on this trip, probably due to some lingering migration from certain species at this time of year. We later saw a Northern Harrier in the Lamar, and I’ve now seen three Rough-legged Hawks inside the park boundary (previously the closest I’ve seen them is on Highway 89 north of Gardiner).

As fun as those larks were, I was thankful we had one decent mammal sighting before returning home. I spied fox tracks ahead of us on the road, but they suddenly stopped. “Wait, where did it…”

The fox was in the brush right next to the car. 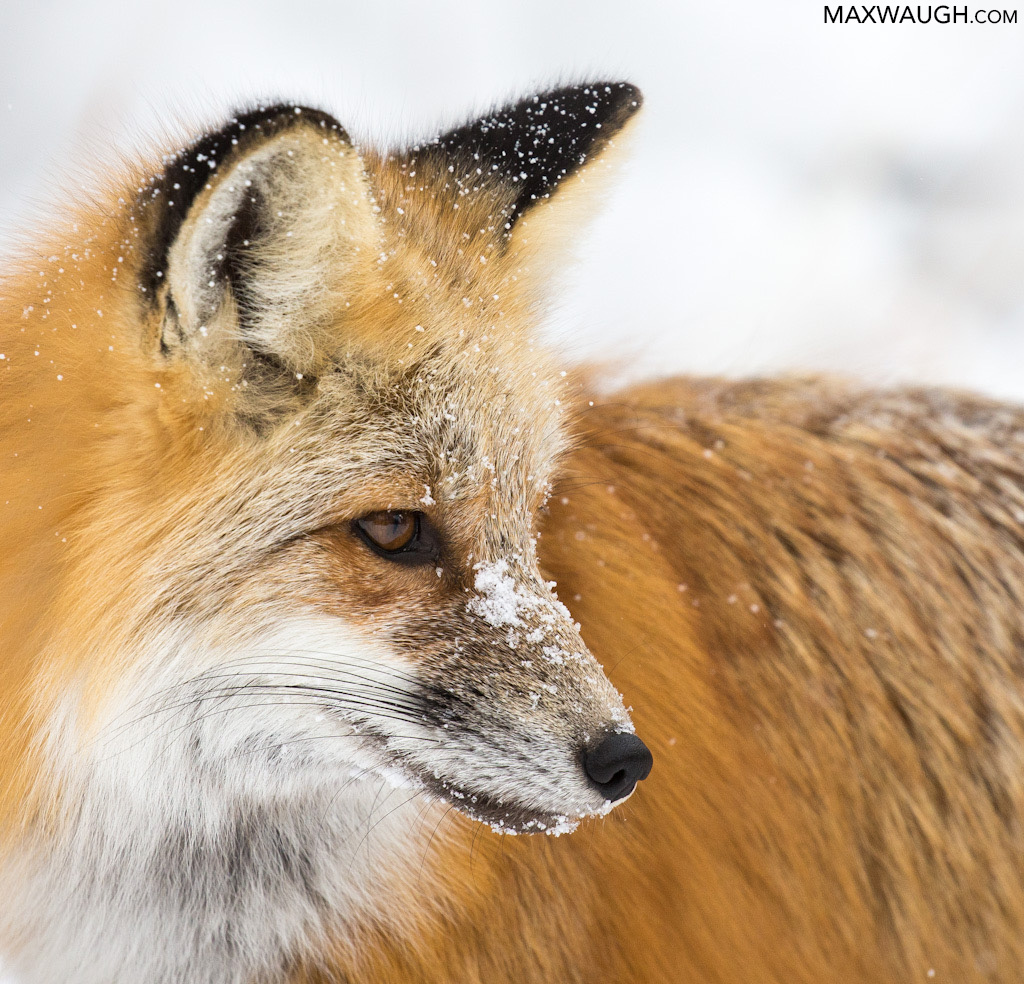 Returning home, we now had three snowy bison grazing next to our driveway. Still no moose, however!