Minus-three in Silver Gate. Minus-seven in the Lamar. And no, I did not pack long underwear on this trip (forgot!), but at least I had my flannel pajama bottoms. Of course, squeezing those into the rest of my layers was like asking the Michelin Man to put on a tube top. Somehow, I was able to lean over and get my shoes on.

I love it when it’s cold in the park (especially when I’m properly attired!). It’s sunny and clear. So much easier to see all the… birds? Yeah, Sunday was a bird day.

But first, we finally found a few bighorn sheep. Some young rams were down near the Confluence. 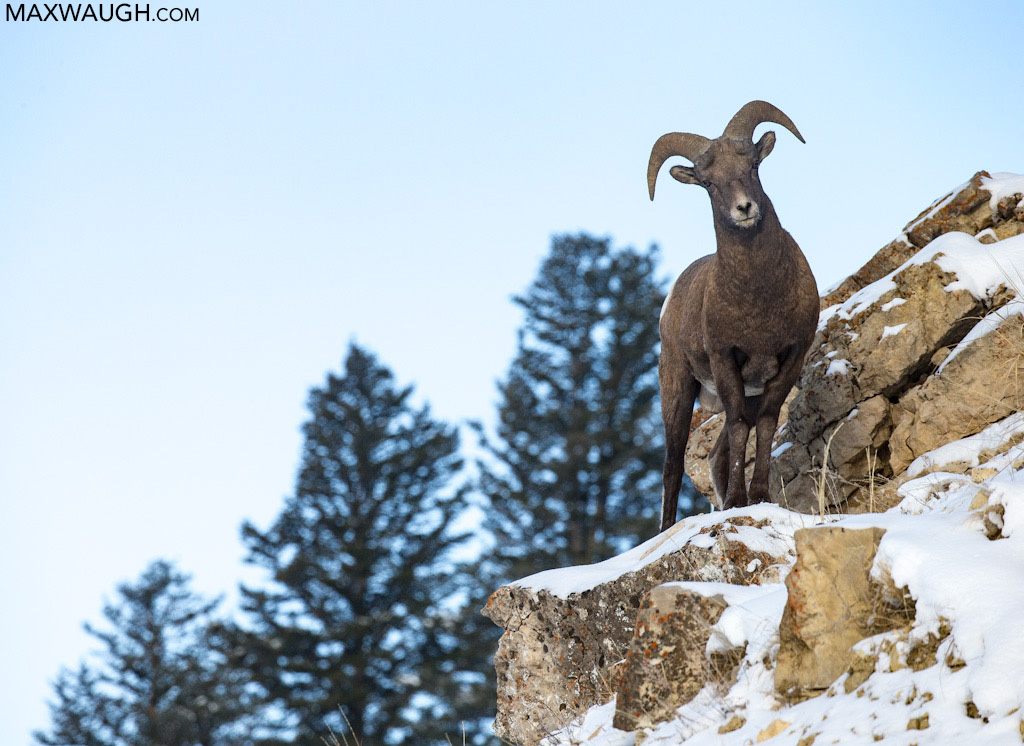 After that, we had more of what I’d call “unique” avian moments. Unique from my perspective, as there have been a lot of birds around that aren’t normally in the park when I visit at other times of year, or they’re just doing interesting things.

Among Sunday’s sightings, a crow! An Honest To Goodness American Crow. I’m so conditioned to seeing ravens in Yellowstone, and only crows back home in Seattle, that a crow in Yellowstone is a weird sight to me.

In Little America, we spied a small flock of swans out on the Lamar River. They took off, followed by a few Canada Geese. They circled over the river before flying a bit closer. Hey, a nice line of swans against some blue sky… they may need to work on the coordination a bit, of course. 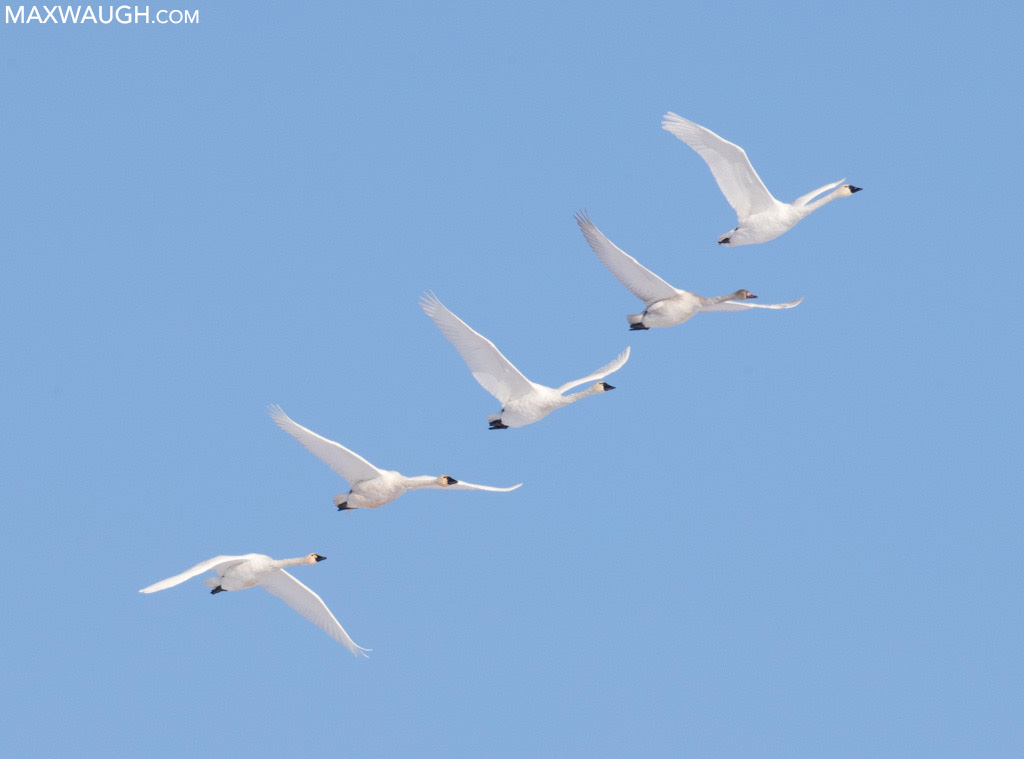 But wait. They were sporting a spot of yellow on their faces. They’re actually Tundra Swans, not the more common Trumpeters. Tundra Swans are known to occasionally mix in with Trumpeters here in winter. I’ve only seen a couple over the years.

We stopped at Hellroaring to check on the pikas again. All quiet, and even hiking out over the hills for a bit yielded no interesting wildlife sightings (lots of deer and elk have been moving through that area, though). Back at the parking lot, I looked up and saw a massive line of white and black birds.

I thought they might be pelicans, but it was very reminiscent of the lines of migrating Snow Geese seen back home during winter. Later, I learned that my  colleague Jort the Yellowstone Guide had photographed Snow Geese in the Lamar River this same morning, confirming my suspicions. Another species first!

And this wasn’t the only massive migrating flock of big birds today. Over in Gardiner, I heard a familiar croaking sound and looked up to see a few dozen Sandhill Cranes flying in formation overhead.

We visited Gardiner in part to explore the northern edge of the park. All of the bighorn rams must be up in the hills prepping for the rut next month, as we only saw a small group of ewes. There were several pronghorns, though. The yellow grass and light dusting of snow made for a nice setting.

On our way back through the park, we spied the Phantom Lake fox again, and a pair of coyotes above the road near Elk Creek. Along the Slough Creek road we enjoyed more (distant) bird action, as a magpie chased a feeding Peregrine Falcon out of a tree. We stopped at Pebble Creek to hike back to the canyon. A lone bison and a skittish grouse were the only company, but it sure was gorgeous back there.

That wrapped up a chilly and pretty day in the park. Perhaps a trip south would be in the cards on Monday.

I guess -7 degrees was just a warmup (warmdown?). It reached -19 Monday morning on our way into the park. I heard Hayden Valley reached -25. Autumn in Yellowstone…

I spent much of Sunday night trying to prepare my new camera body, the Canon R5, which just arrived. This is far from ideal timing—I’d have rather had it before the trip, but I only now got off the waiting list—and I was barely awake enough to set it up as well as I could on short notice. This is my first mirrorless camera, and it’s got some interesting new features that will take a while to figure out. Oh, and my tablet can‘t even process the photos, so all of the remaining photos in this report were taken with my older camera body and shorter lenses.

We quickly found opportunities to test the new camera out. More Horned Larks were hopping up for grass seed. And then a Bald Eagle landed near the road in Little America. For the first sighting, I rolled the car window down. Oops. I forgot that the last time I did this, it froze in place. So I was riding around with the window open in negative temps for a while. Delightful.

Hot chocolate at Mammoth definitely hit the spot after that, but first we walked up the boardwalk to snap a couple shots of the terraces… 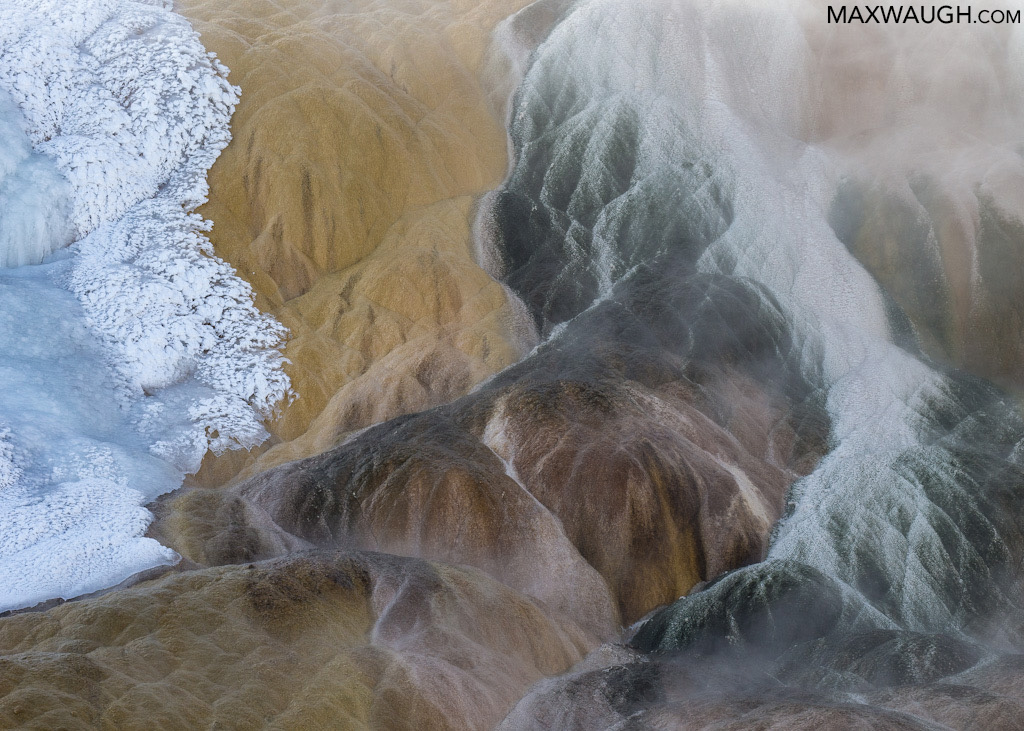 …as well as the small birds (later IDed by my colleague Adam at Tied to Nature as American Pipits) that were wading around, presumably feeding on the thermal bug life. 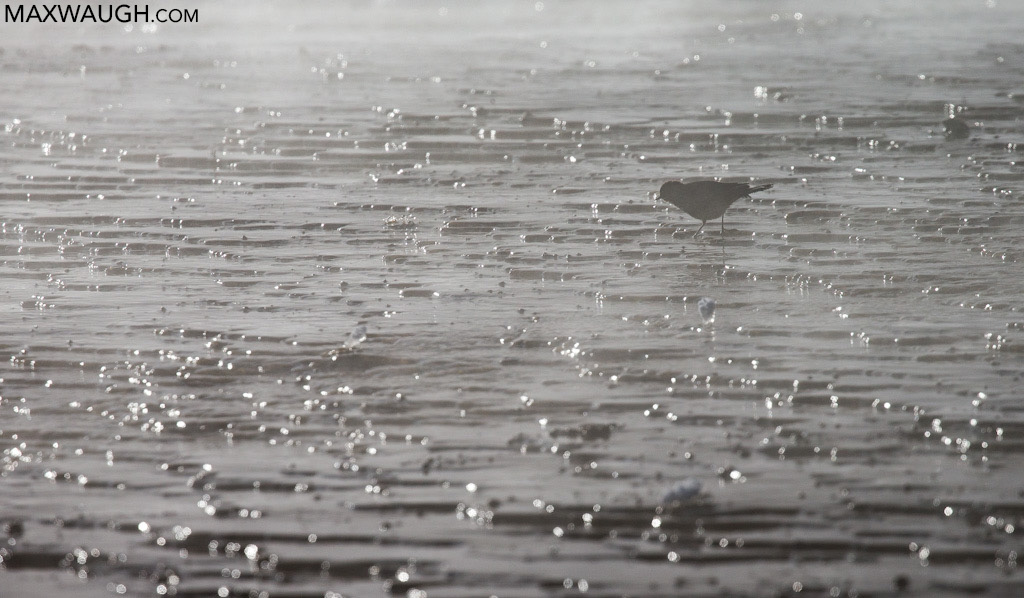 After nabbing our cocoa, we drove south. The entrance to Hayden Valley was like a frozen wonderland. White, frosty trees everywhere. Swans out on the quickly-freezing Yellowstone River. Fog rising off the valley floor. It really feels like I’ve been experiencing a bonus winter trip to the park this week. But with more accessibility, of course. 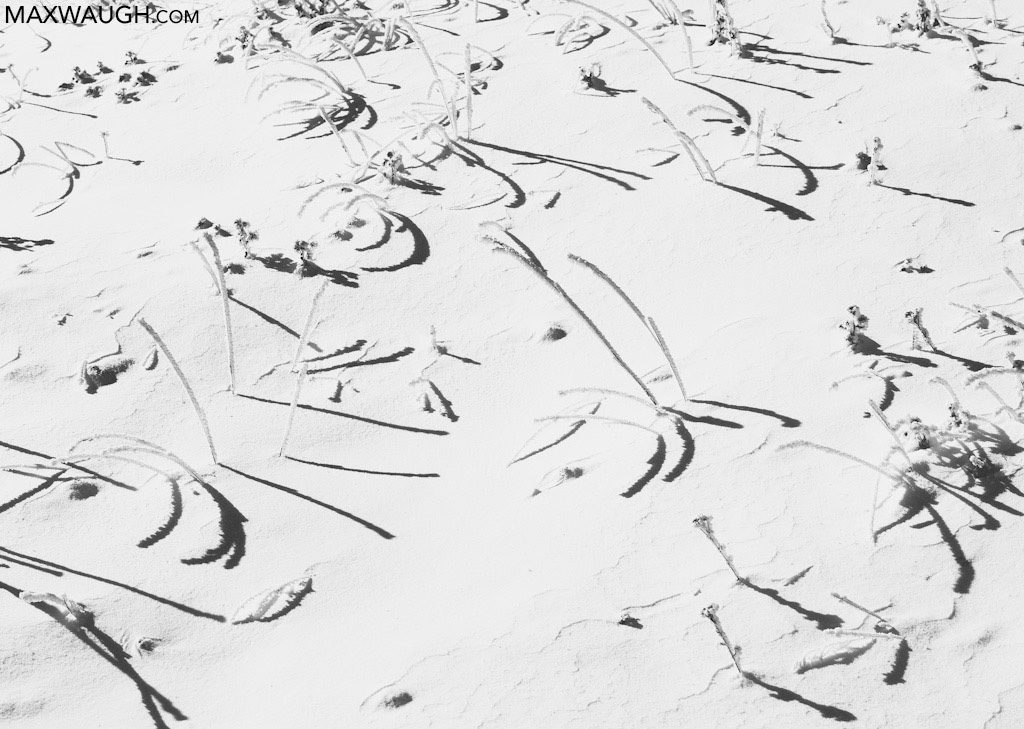 It was already lunch time, so we drove to our favorite spot (definitely worthy of MVP consideration this week): Gull Point! What critters would greet us this time, following our weasel and bird-on-spider action? Sadly, it wasn’t a marten (though tracks were everywhere). Instead, we had loads of tiny songbirds show up: chickadees, juncos, creepers, a nuthatch, and a Ruby-crowned Kinglet. Lots of action, all very difficult to focus on… the new camera got a workout and held up fairly well.

On our way back north, we spied three coyotes we had passed earlier in Hayden. They were howling from a distance earlier, but hunting closer this time. More coyotes greeted us up in the Lamar, two in the west and one in the east. We stopped to check some recent badger activity (found some weasel tracks too), without any luck. So it seemed like everything was wrapping up quietly. After all, the moose were once again absent from the eastern Lamar, Pebble Creek, Soda Butte Picnic, and Barronette…

But not my driveway, apparently! We pulled in to find two nice looking bulls marching across. 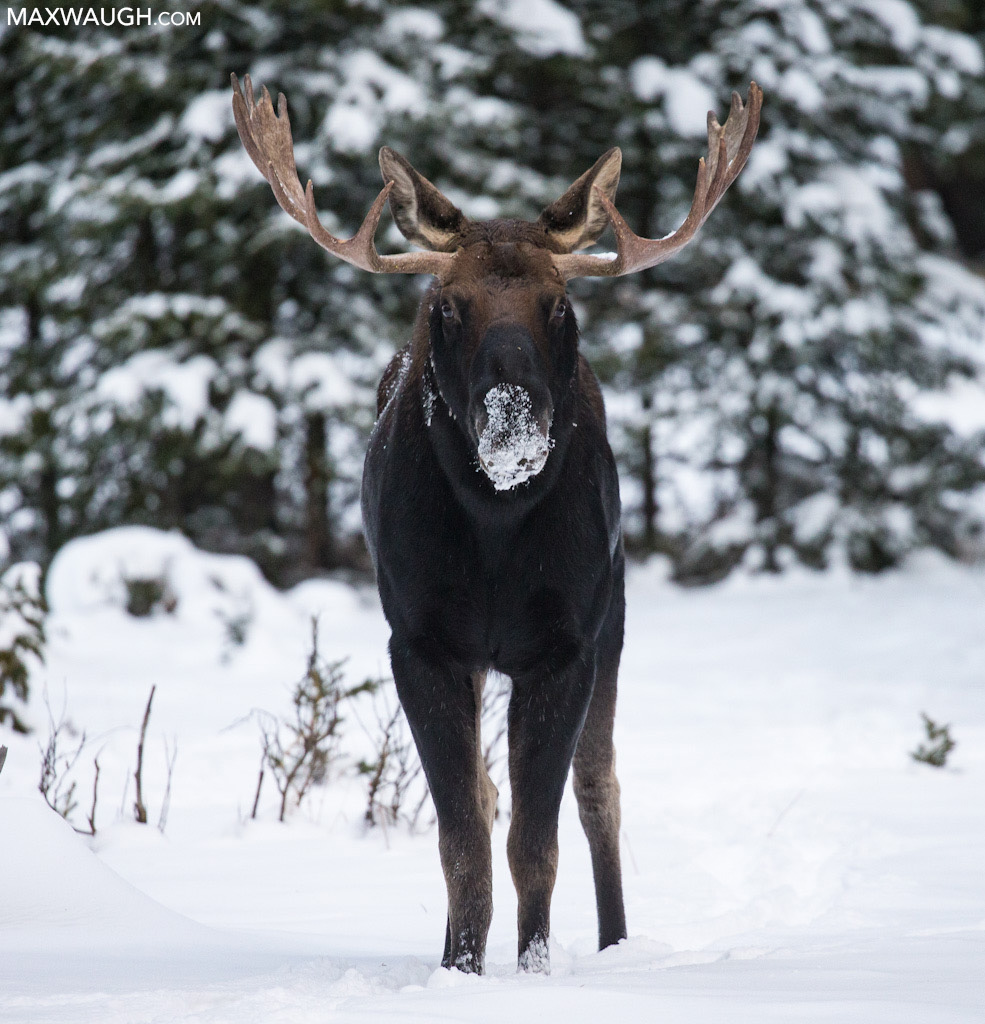 So much for a lack of moose this month. We even spied a distant third bull later. That was a great way to finish the day.

It was my final full day in Yellowstone for 2020 (presumably), and things had warmed considerably. Still PJ and Pants weather though.

We had a slight pause before hitting the road, so I looked around the property (in case our bull moose had returned). Pink hues greeted me above Mount Republic. 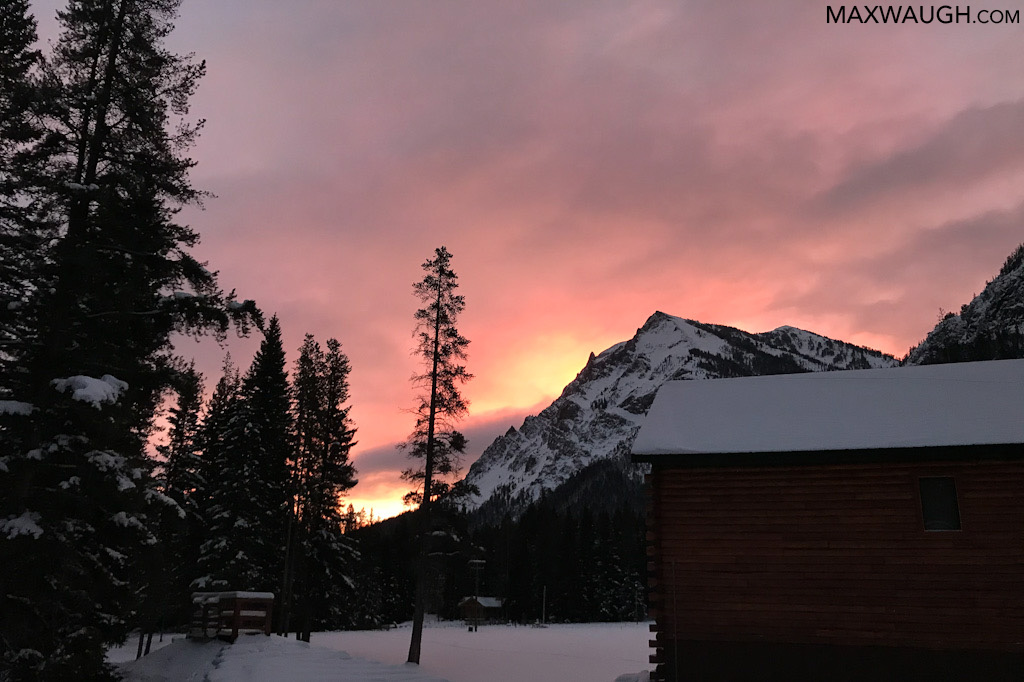 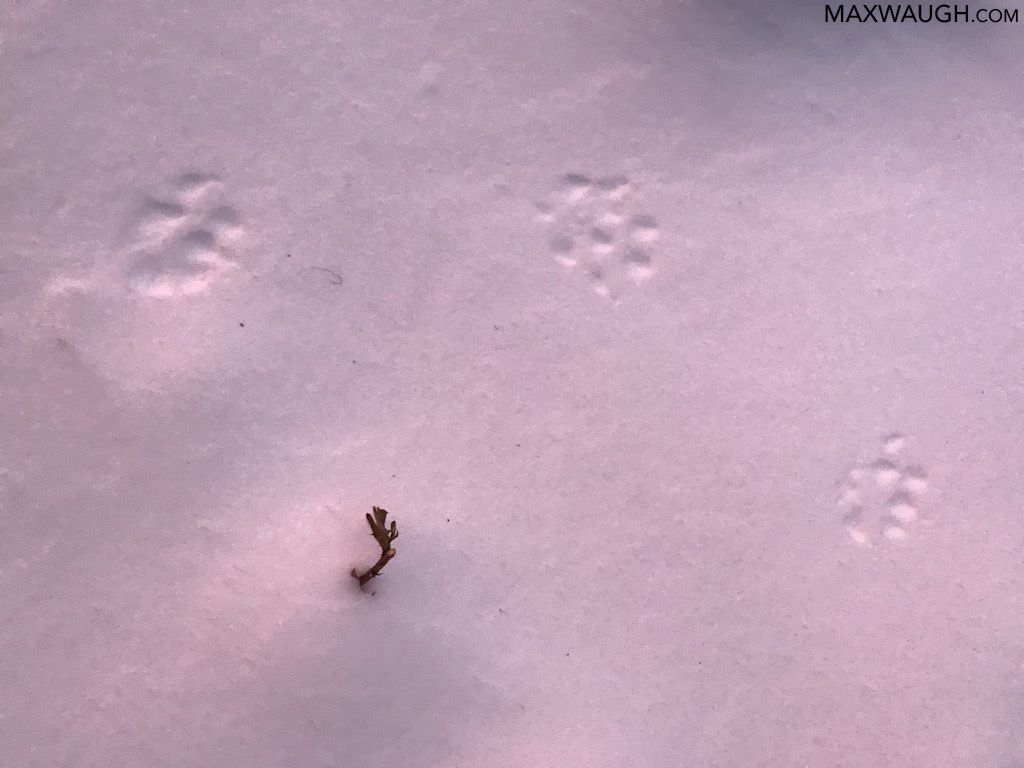 And out at the creek I spied a different moose grazing in the willows. Not the last moose of the day. They’re finally showing up to say goodbye. 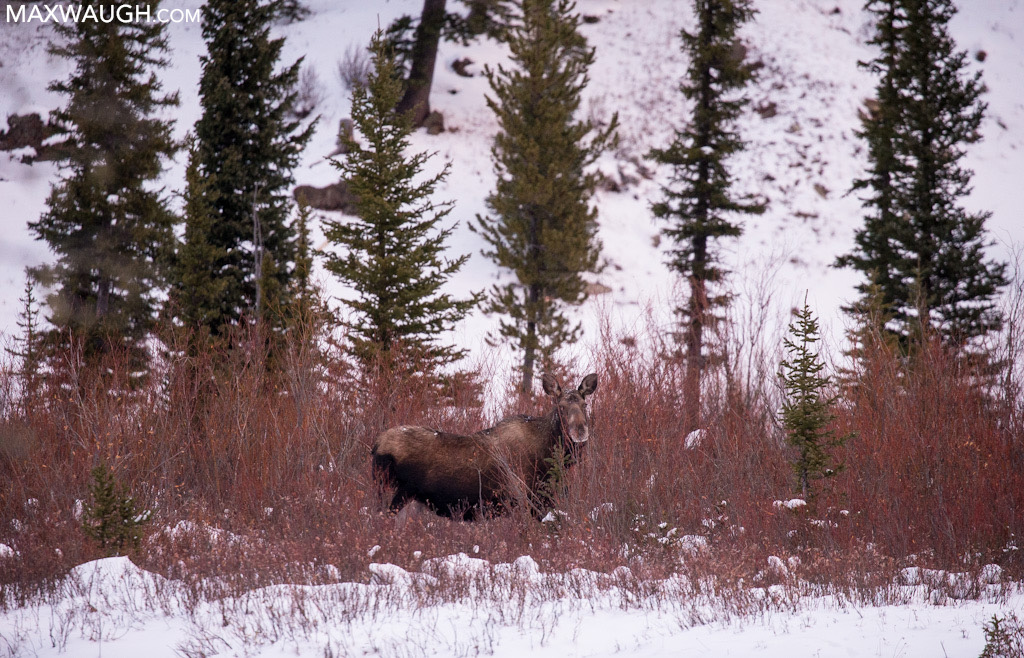 On our way into the park, a fox moseyed past us down the road. It wasn’t until Little America that we stopped, for a trio of coyotes out in the flats. One of them was busy hunting while the others napped. So far, I’ve been able to test my new camera on a couple of hunting coyotes, and the R5 seems to track them quite well (it’s possible I had it on the Bouncy Song Dog setting).

There wasn’t a great desire to search endlessly in the car today, so we actually got out on foot a fair amount. We hiked a ways up the Blacktail Drive, where there were load of tracks (from mouse to moose), but no animals. We returned to the car, and on our way to the next walk, stopped at Hellroaring for a grouse that wouldn’t get away from the road or parked cars. 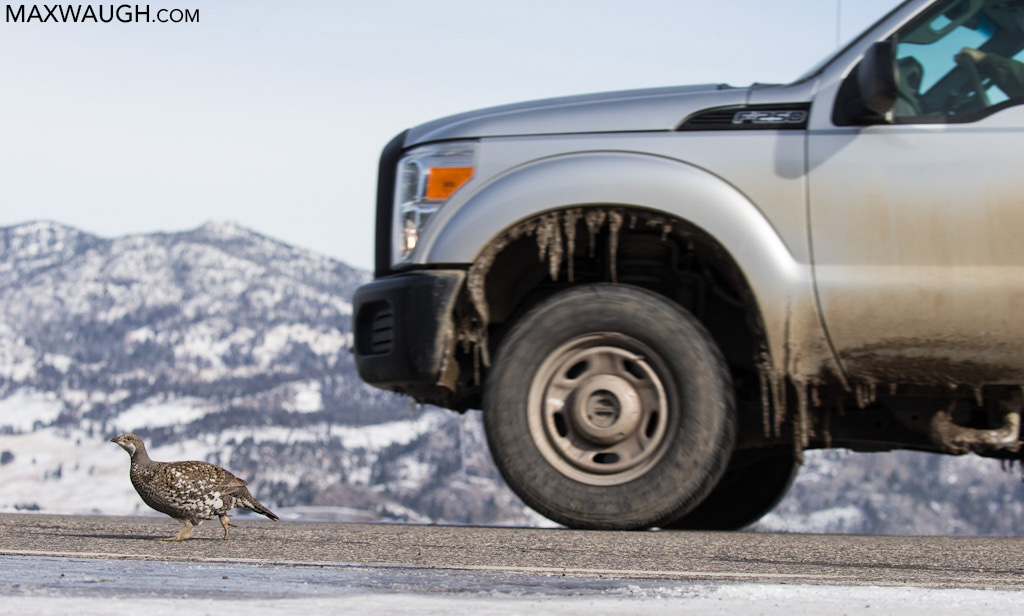 Two more moose grazed back near the trees. We next hiked in from the other side of the Blacktail Drive. More tracks, but still no activity, beyond one little chipmunk who struggled to get up the hill in the snow.

Following lunch, we checked the Slough Creek Road once more, and then ended up at Pebble Creek, where we walked back, but saw nothing but some lost hikers.

A very chill day (despite being the least chilly day in this recent stretch), and we returned early to Silver Gate so I could start prepping for departure. If anything else happens between this afternoon and my flight out tomorrow, I’ll update this report with a postscript.

Thanks for following my latest reports! And big thanks to Pat for the invitation to join him on this pseudo winter adventure.

My next return to Yellowstone—as of now—is scheduled for January, 2021, when I’ll lead my winter photo tour. If you have any interest in joining me on that adventure, I do have a couple open spots. Learn more here.