Back to Yellowstone, this time to lead my first photo tour since last year’s winter visit. I scheduled a week to myself beforehand, and arrived Saturday afternoon.

I’ve mentioned before how you subtly start to adjust to being in the park after you enter the gates. Driving slows, eyes dart 10-15 degrees farther left and right as you try to spot something out the windows, and, as always, you try to balance hugging the outside shoulder to avoid wide snowmobile trailers barreling down on you without actually catching the snowy shoulder and driving off the road.

It was a peaceful drive. Plenty of bison, some elk, and one coyote sitting above the road in the Lamar Valley. I arrived in snowy Silver Gate, got everything unpacked, and settled in. I spent part of the evening preparing new camera gear.

This trip presents a first: I’m going exclusively mirrorless behind the lens. You may recall that I received my first mirrorless body (Canon R5) in the final days of my last fall trip, and I’ve only used it once since then. I also picked up the 100-500mm RF lens, and just before this trip the R6 body to pair with and compare with the R5. I suppose I’m taking a bit of a chance, not toting one of my DSLR bodies as a backup (it’s created even more hassle in terms of photo processing, since most iPad apps don’t like files from the new cameras), but I really want to devote time to this new technology and see if it will fill my needs. Oh, and I’ve also got a new tripod and head, which I’m testing out for review. Hopefully I will not be writing too much about how I missed shots because I was fumbling with all the unfamiliar gear.

My usual trip routine usually kicks off with a late start on Day One, since I always underestimate how much time it takes to gather everything, eat, get it in the car, etc. On Sunday I was out by 8:15, already after sunrise. The nose hair prickled when I stepped out, so I knew we’d be below zero. It dipped to -15F eventually.

Driving downhill at the Lower Barronette meadow, I was startled by a moose cow and calf emerging from the short pines to my right. They were equally startled, and hustled swiftly through the deep snow before crossing the road in front of me. 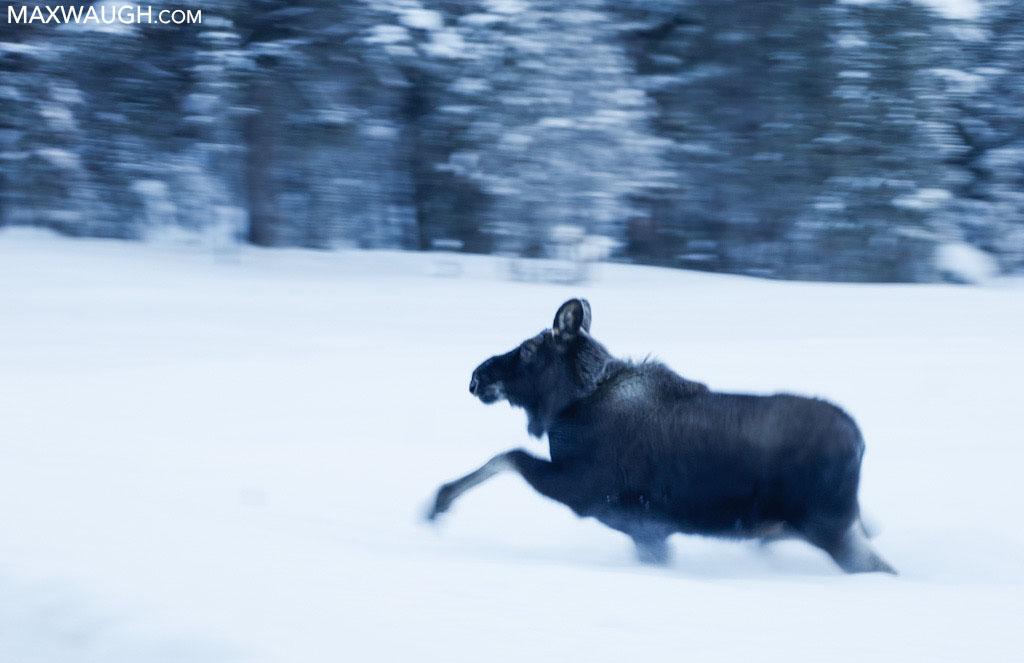 Arriving at the Lamar Valley, I started hunting for my sunglasses. Everything was glowing, even though there was a fair bit of mist hanging low over parts of the valley floor. 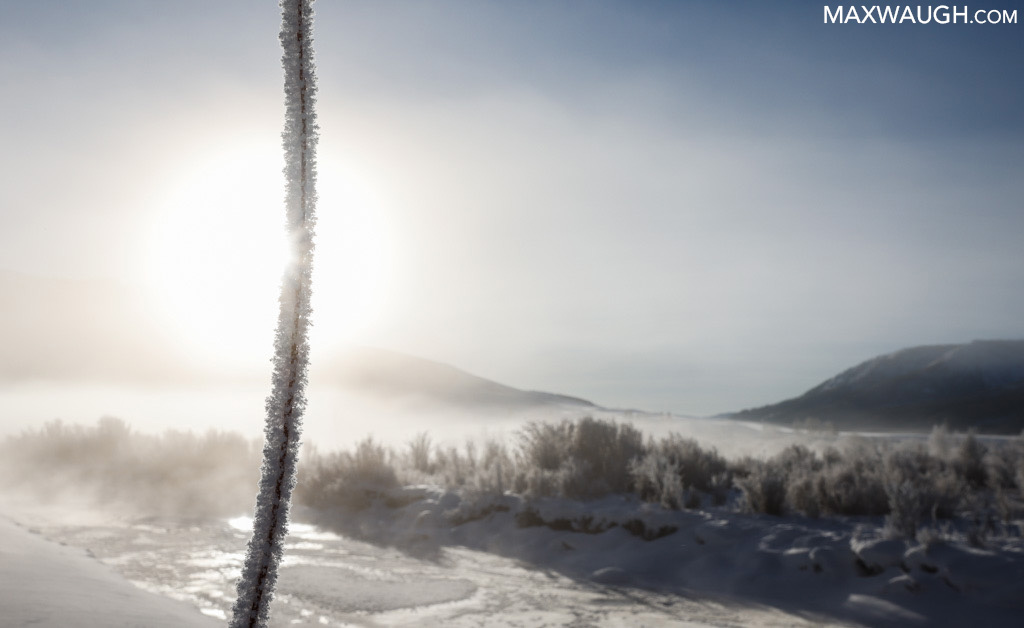 Apparently otters were out earlier in the morning. I could see bighorn sheep grazing high above the road, but didn’t stop. If the first day started mainly with a few landscapes and some frosty atmosphere here and there, I wouldn’t have a problem with that. A few drives back and forth in the Lamar yielded some lovely scenic views, but little in the way of wildlife photo ops. I did stop to chat with friends.

One noted the abundance of Pygmy-owls lately, and indeed, many of my acquaintances have been sharing photos of the diminutive little fluff balls in recent weeks. In my case, it’s been a few years since I had seen one in the park. Though I consider myself a good spotter—I have pretty good success finding Pygmy-owls and their small cousins in places like Latin America and Africa—I had actually never found a Pygmy in Yellowstone by sight. It was always the audio clues (that beeping call) that gave them away, both in spring and fall.

So I figured I had a nice challenge in store as I drove west to begin an owl search. Keep in mind this bird is smaller than my hand. But I figured my chances were decent… I just had to look for little round tree-toppers… like that one!

Wait, really? Unfortunately, the rotund brown shape at the top of a conifer was along a stretch of road with no pull-outs. I had to drive ahead a ways to find parking, gear up and trudge back. It took me a good fifteen minutes to do all that (it was my first time breaking out the tripod and big lens, so I wasn’t quite prepared… oops!). There was a good chance whatever it was had flown. There was also a good chance it wasn’t even an owl. Though it sported the right shape (and I was pretty confident this time), it’s easy enough for another bird to look owl-like whenever its neck isn’t extended, so I recognized that it may have been a case of mistaken identity.

I returned to the spot where I saw it from the car. The “owl” was gone. I scanned tree-tops, figuring it wouldn’t have gone far if it was in hunting mode. In the distance, the tiny ball sat atop another tree. This time I took a peek through my binoculars. Cha-ching!

I had my Pygmy-owl, but I still had to wade down through the snow to get closer and see if I’d have a good view. Unlike many of the other members of the owl genus Glaucidium, Northern Pygmies love to perch way up high at the tops of tall trees. Which makes photography more challenging. And of course this one had picked the tallest tree in the area.

I had to wait a good half hour for it to move. Though I hoped to find a hillside perch that would give me something closer to an eye level view, the light was usually in the wrong direction, and I could never quite get close. So it was all about composing my subject with a fair bit of tree in the frame. 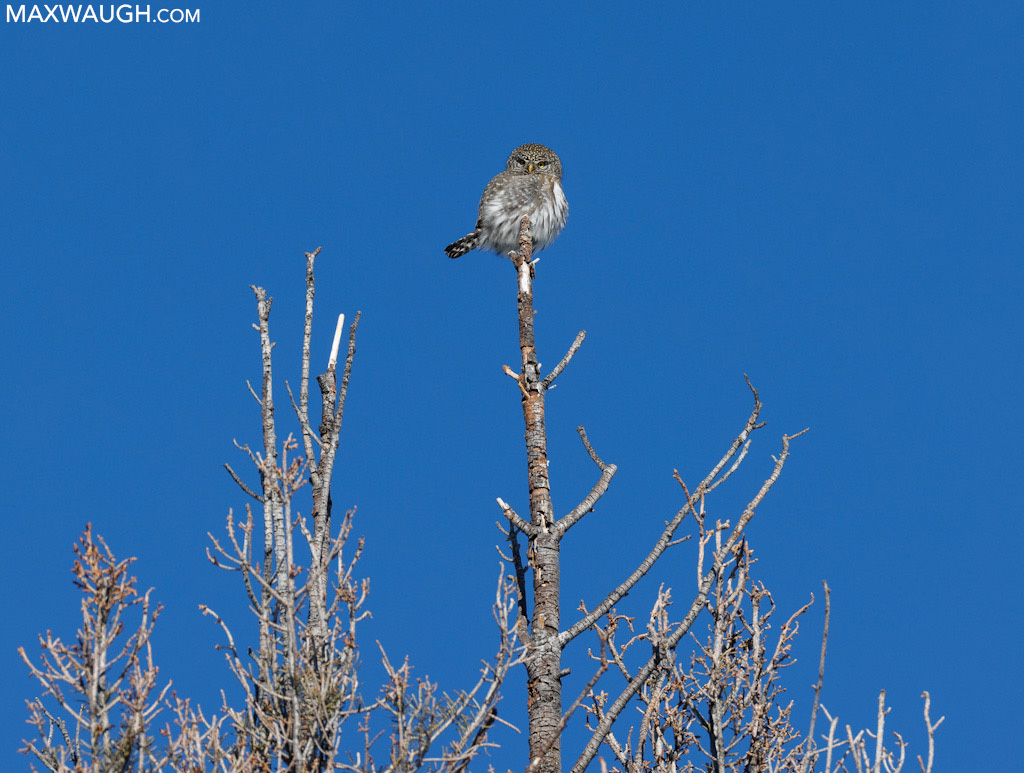 A great find and a successful shoot under the circumstances, even if it meant having to trudge all the way back up to the road (the wolf tracks I found almost made the slog worth it). So much for taking time to adjust to the altitude.

Following a lunch stop, I cruised back to the east. Bison huddled under frosty trees. 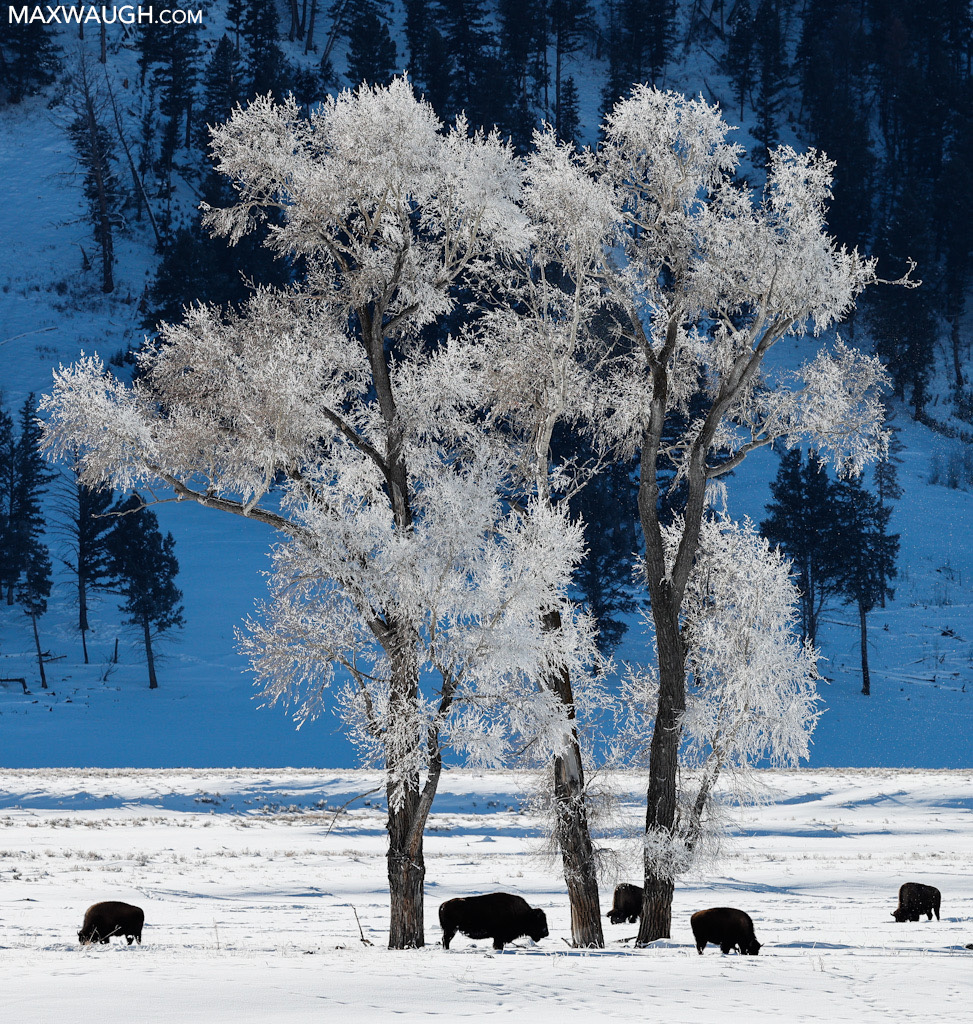 There are tons of ermine tracks everywhere. I checked a few spots that had seen weasel activity in years past, even hiking back up the Pebble Creek Canyon (farther than I’ve ever gone before) and back, but didn’t have any luck. I continued to be surrounding by lovely textures, shadows, and patterns, either in the snow or on the surface of the mostly-frozen creeks. 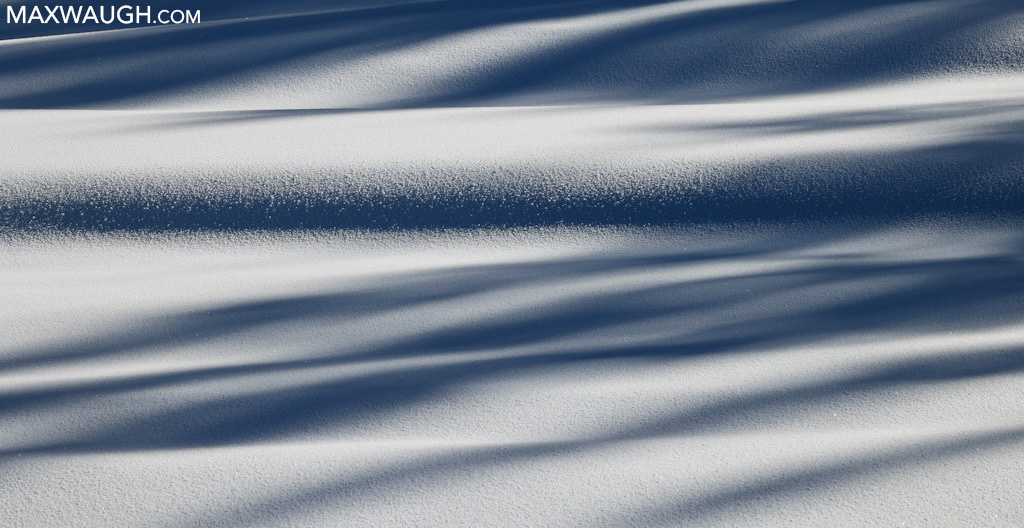 At Round Prairie, a trio of bull moose foraged in the shadows. I suspect this was the same group that we encountered on my property in October. 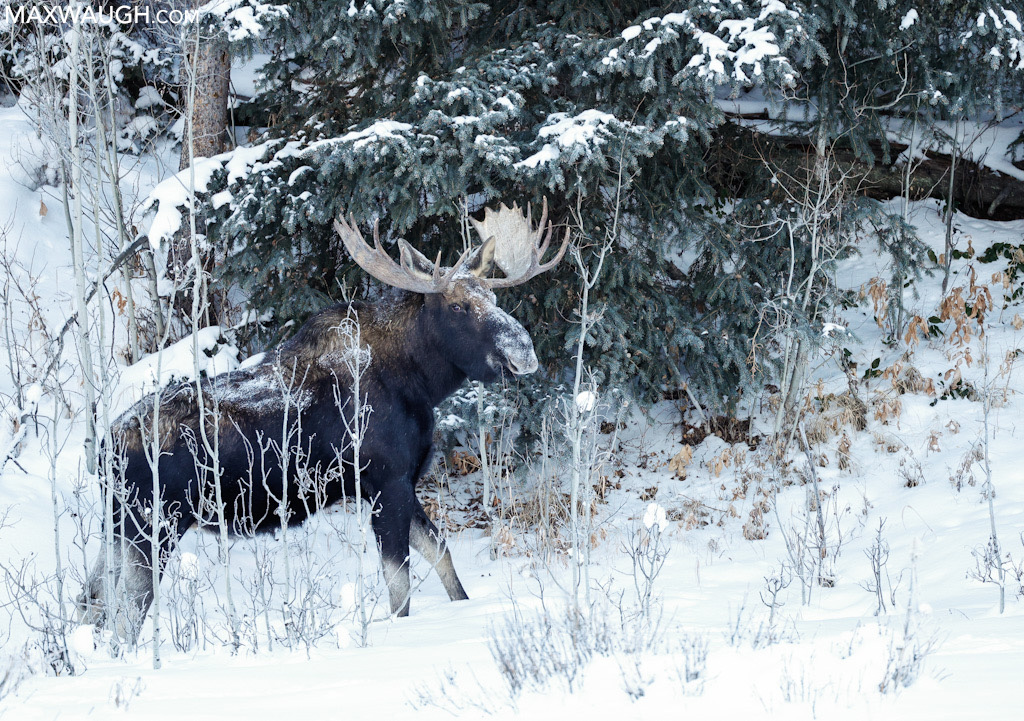 One final pass out into the eastern Lamar yielded a nice view of a bighorn ram sunning itself above the road. 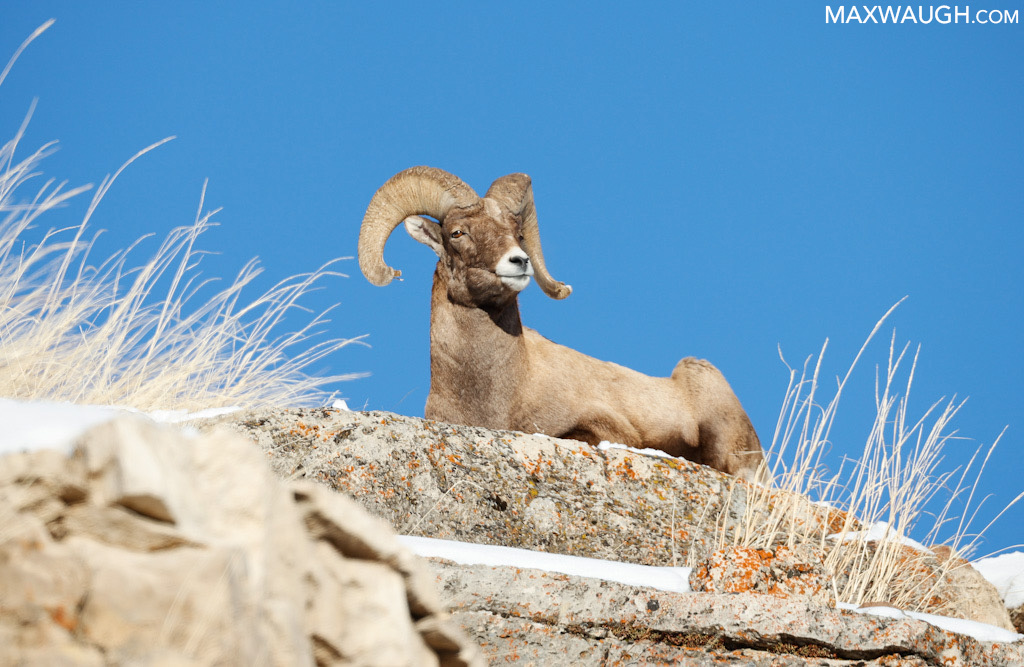 Afterward I chose to return to Silver Gate with a little daylight left, in case I might happen upon a fox or other small critter on the way. It was a straight shot, with no encounters of note. I walked the property—fox and marten tracks, but no sign of the creatures that left them—before turning in.

Last night I started thinking about what it is I do here. I drive back and forth over the same ~30-50 mile stretch of road all day. Over and over. Looking for animals.

Calling myself a photographer seems rather mundane and woefully misleading.

This Pretend Morning Person did manage to get an earlier start Monday morning, despite a terrible night’s sleep. I was hoping it would pay off in all sorts of good stuff. Despite my early entrance into the park, I was still a few minutes too late to catch six bull moose trotting across the flats at Round Prairie. They’d stop every so often, and the smaller bulls would pair up and tussle with each other. The largest-antlered bull ignored the rest most of the time and grazed on willows. Unfortunately, I was circling trying to find a parking spot while all this was happening, so I missed it.

Too late for that action, too early for the otter that appeared at the Confluence after I drove through.

The Lamar Valley was bathed in blue and golden hues. Gorgeous. There was one thing that would make it even more beautiful to me, but whatever furry thing I was hoping for was nowhere to be found.

My plan was to drive westward, but that was quickly derailed by some business issues I had to tackle immediately. Ever try writing code on a phone in an idling car while it’s -8 outside? Chalk up another Yellowstone first. An hour wasted, and I sort of felt like the rest of the day was derailed.

I suffered more indecision at this point, unsure whether to continue west, or just hang out in the northeast the rest of the day. After a few false starts, I did stick closer to home. Which allowed me to finally take a couple raven photos. Waiting until Day Two is simply unacceptable when it comes to filling my raven quota. 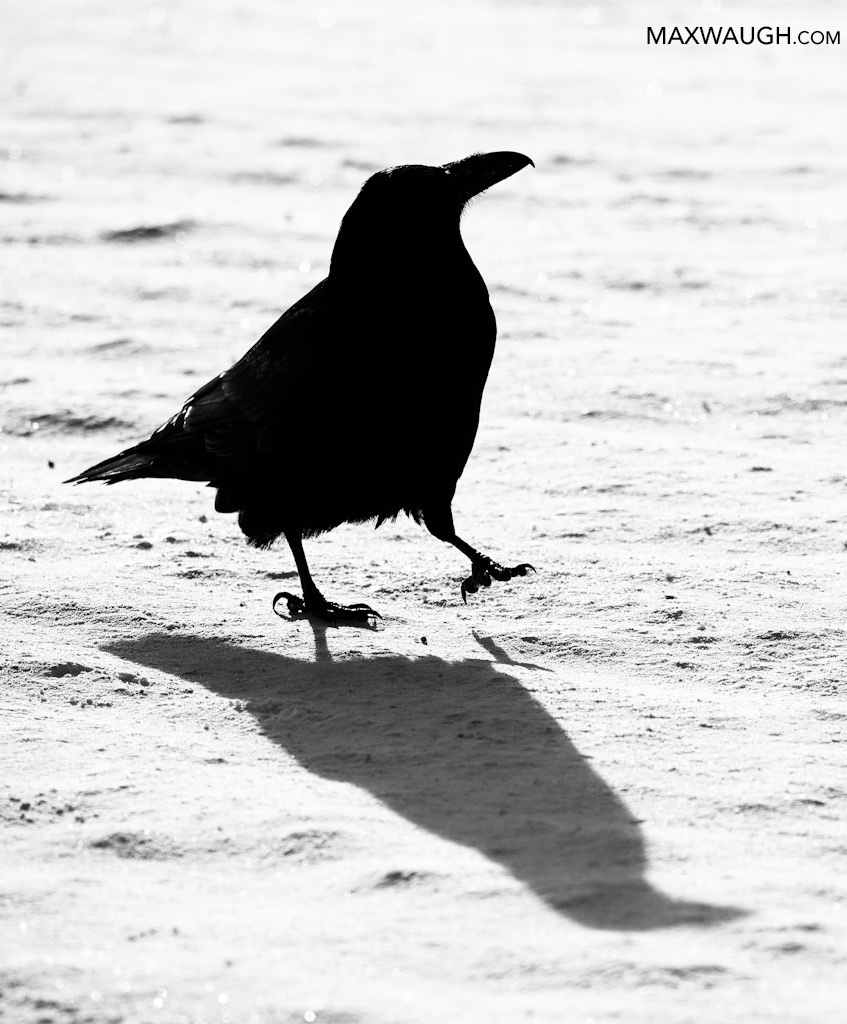 The remainder of my time was taken up by casual searches, the occasional walkabout in the thick stuff, and rare stops for photos. The frosty trees I photographed in the Lamar yesterday were front and center again when a herd of bison rumbled across the road and galloped past them. 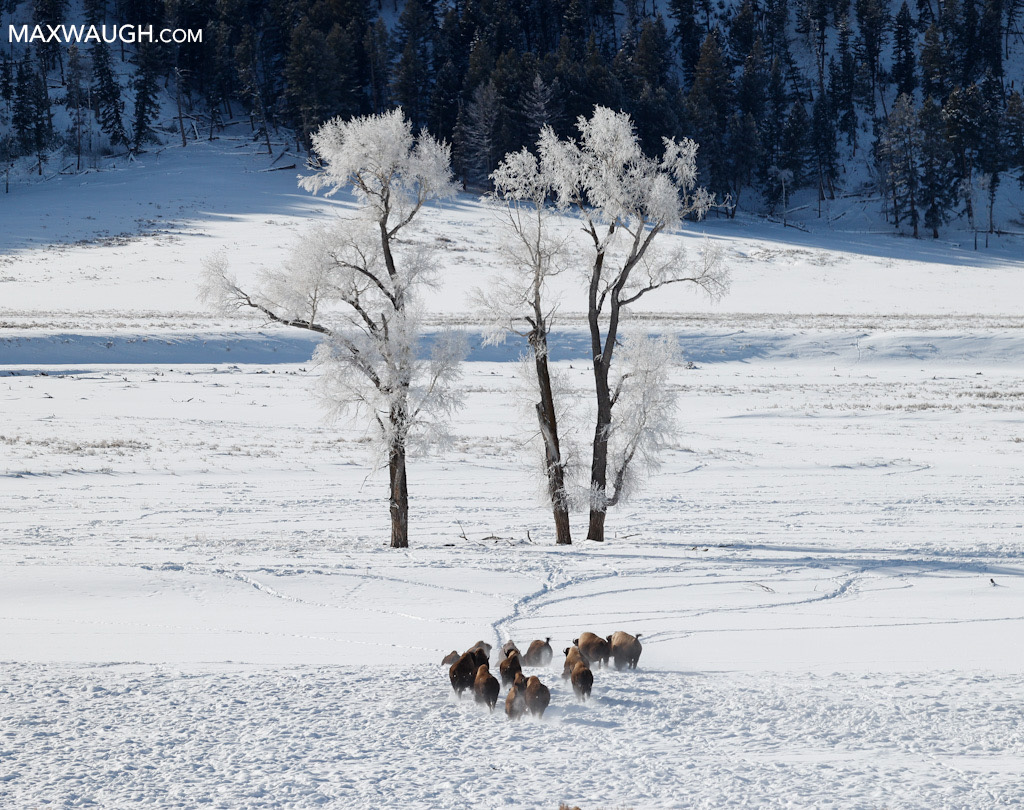 I hiked down the Thunderer trail—it’s tamped down by snowshoes, making it fairly easy to navigate on foot—emerging in the beautiful garden of small pines dotting both sides of a frozen Soda Butte Creek. It’s one of the more peaceful, beautiful hideaways found in the northeast. 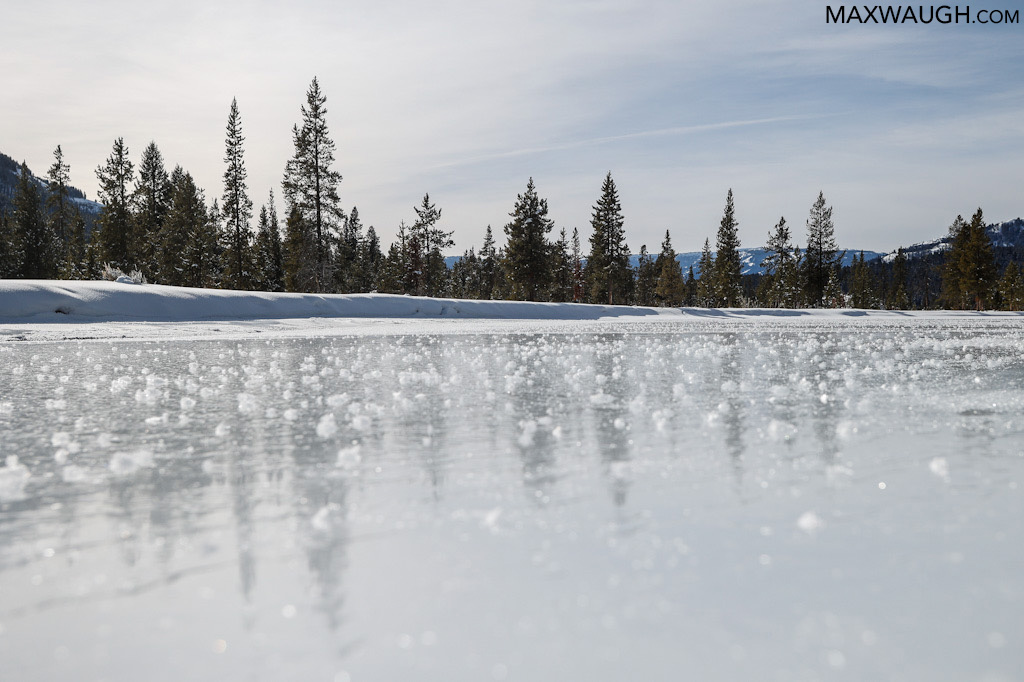 In the afternoon, coyotes emerged. I was just leaving Roosevelt when one leaped and practically disappeared into a snow bank near the road. 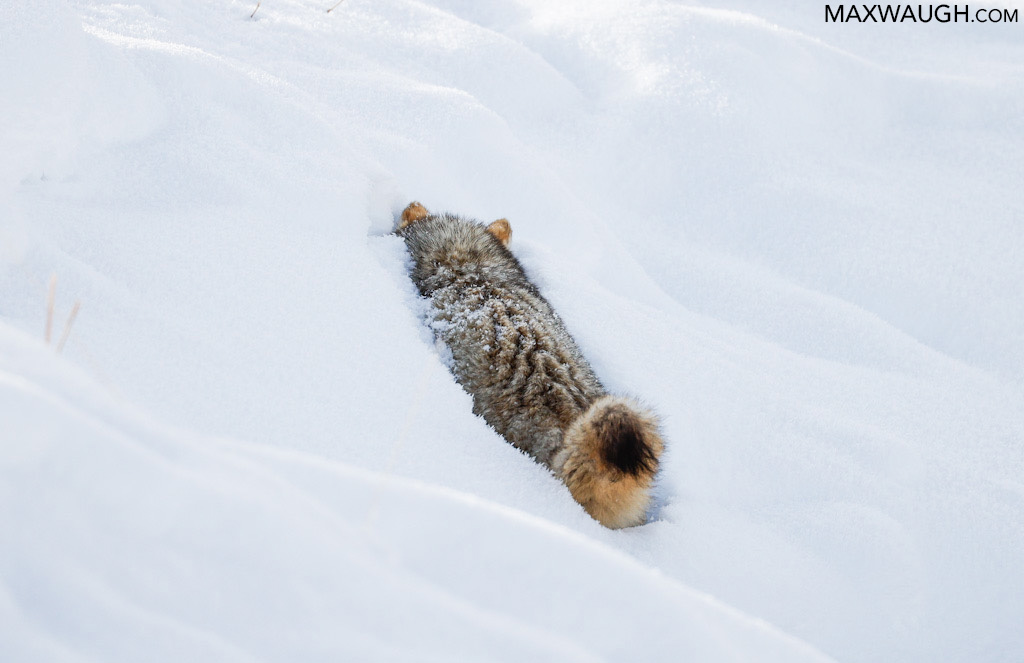 Another trotted along the road in the Lamar. Two more lingered near the Confluence, where some remains from a bighorn sheep carcass (presumably hit by a vehicle earlier… most of the remains were removed by the Park Service) were attracting scavengers. 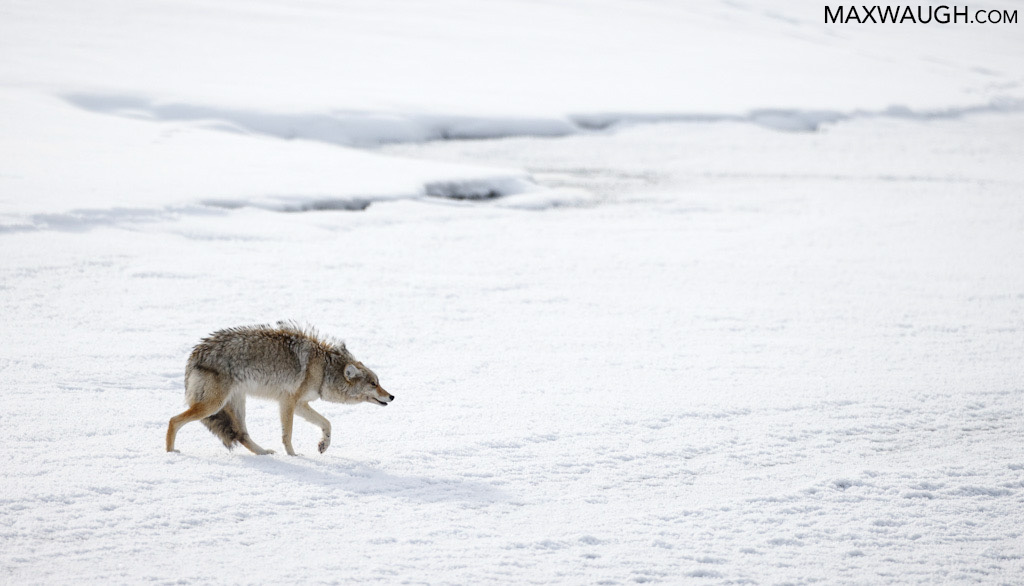 I made one more stop to toddle in the snow for a bit in hopes of encountering a weasel, and then headed for home. The pine martens are teasing me, leaving fresh tracks around the property, closer to the front door this time. It’s very tempting to stick around all day in hopes someone pops into view…