It was a much nicer day on Thursday. No ice tornadoes or whatever we survived the previous day (the wind was so bad that the highway near Livingston was closed, tipping vehicles left and right… indeed, I saw our UPS driver in a UHaul on Thursday!).

As always, the morning started with my scanning for fresh signs of passing.

In the case of the last item, I usually try to stop and pick those (and all the coffee cups they throw out the window) up, but only when it’s safe to do so. Otherwise, the plow gets to them and buries them until spring.

This was one of those mornings when I drove farther and farther west, wondering where the heck everyone was. Very little traffic. And you know what that means…

Well, it doesn’t always mean you’re missing out on something, but today that was nearly the case. Other visitors were preoccupied by wolves to the west. I only learned about this when an urgent call came through imploring so-and-so to get to such-and-such a place immediately. Fortunately, I was only a couple minutes away from Such-And-Such, and arrived to see several wolves (I counted thirteen with a quick glance through the viewfinder) in the distance. Far closer than they’ve been since I arrived here in the north, but still too far for photos or even video (too much heat distortion).

I stuck around a while in case a wolf would pop out closer to us, or if the pack decided to change course. They didn’t.

On the way eastward, I made a quick stop to snap of a photo of the large bighorn ram standing at attention above the road. 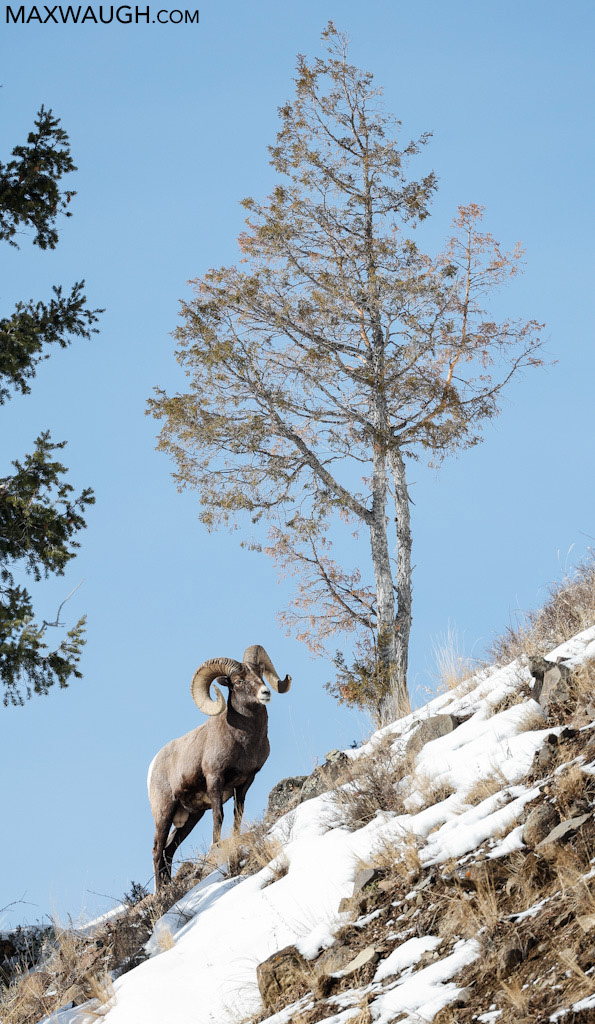 The timing worked out well enough for me to head back to Silver Gate for lunch. I didn’t go inside, actually. I parked my car in a strategic location to sit and watch the property… just in case that pesky marten appeared! The last tease took form in a set of tracks leading right to my front porch.

Well, it gave me the slip again, so I was soon making my way back into the park. The sun continued to shine. But little was happening of note. A pair of ravens alighted on a boulder in Little America. 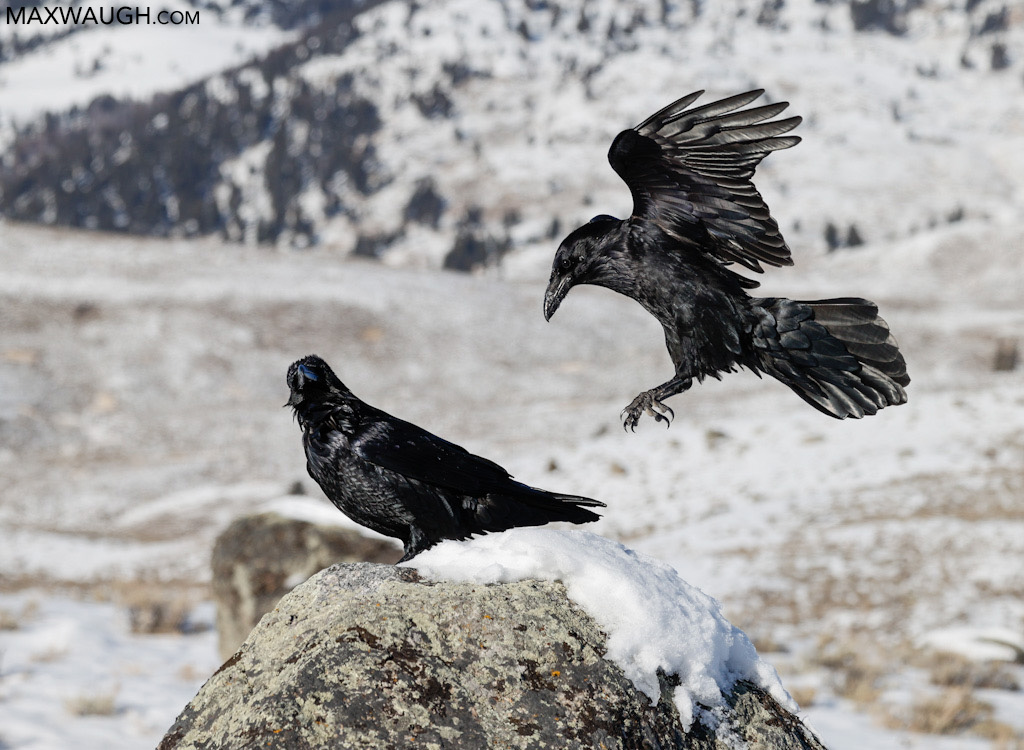 I wanted to mix it up, so I invited some friends to join me on a shuffle down to my Pygmy-owl spot from the other day. At least we got some exercise. Oh, and we saw two woodpeckers. However, no owls, or any other animals.

Silly me, I thought that was going to be it for my daily exercise. Instead, on my way back through the Lamar Valley, I spied a shape moving up the north hill. Coincidentally, this was the same area where I saw my first-ever winter badger, almost a year ago to the day. This was moving too quickly for a badger. It didn’t look right for a coyote (the most common smallish animal we’ve been seeing). The size and gait didn’t match. I slowed and grabbed the binoculars. Even for a fox, it didn’t seem quite right.

With a magnified view, I glimpsed… black. An odd color for most animals around here, except…

Well, I’ll tell you that it was one of the Top Ten Animals on my Yellowstone Wishlist. And it left tracks that look like this… 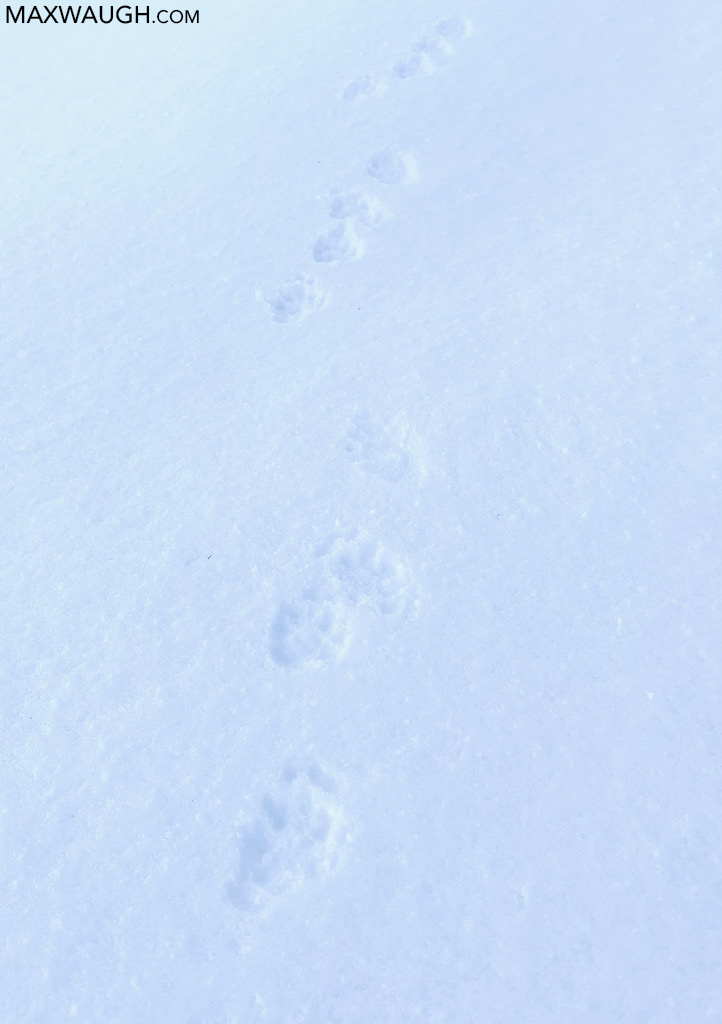 And it was always pointing away, never bothering to even give me a cursory glance over its shoulder. I managed to get within photo range, but landed nothing but rear end shots (more content for the long-promised Animal Butts calendar). Finally, it went uphill and cut across just briefly… enough to get a profile shot from a distance. 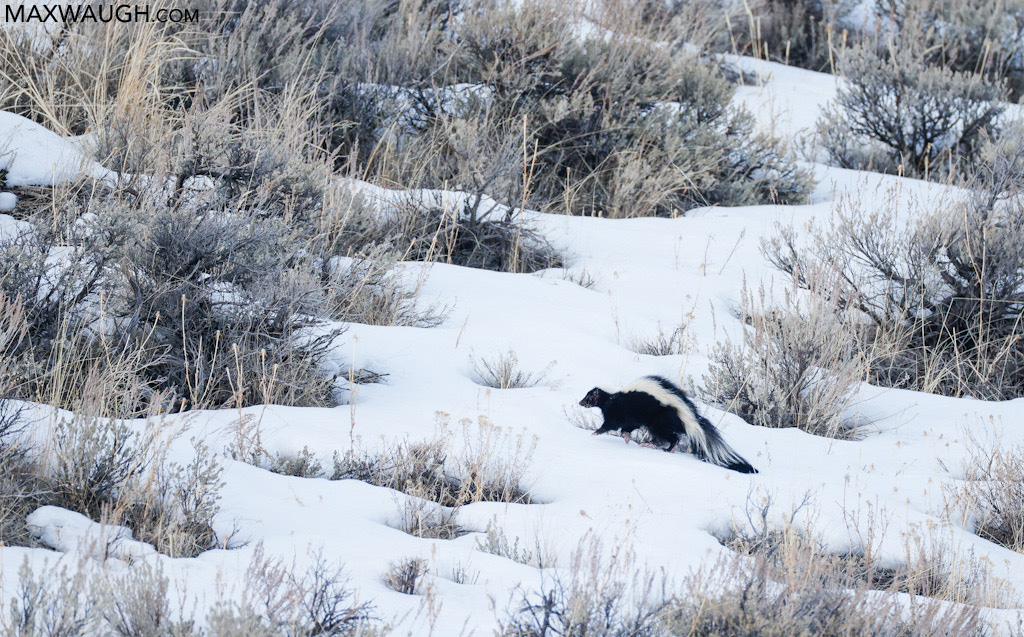 That’s right, a SKUNK! My first-ever striped skunk sighting in Yellowstone, and my first photos of this particular species. Say it with me, everyone: “Yellowstone always presents something new and different!”

(I’m pretty sure it spooked a small herd of bison on the way up too. Perhaps with good reason.)

I barely touched the camera on Friday, but it was still a fun day. Well, aside from the earlier-than-normal start. I finally followed through on the idea of getting to the northwest corner to check on things. On the way, wolf watchers were active, leapfrogging eastward in attempts to find their quarry. 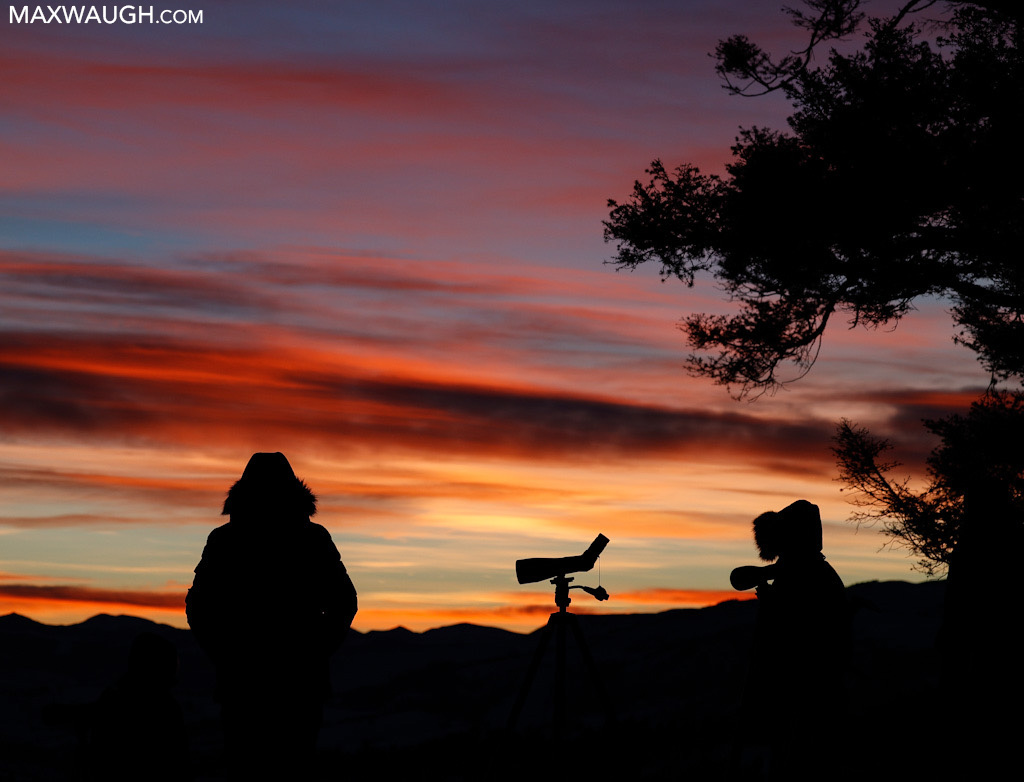 I made it to Mammoth, where I explored high and low. Not much in the way of activity, but on the way back downhill I spied a herd of bison on the far ridge. I snapped a couple quick photos. 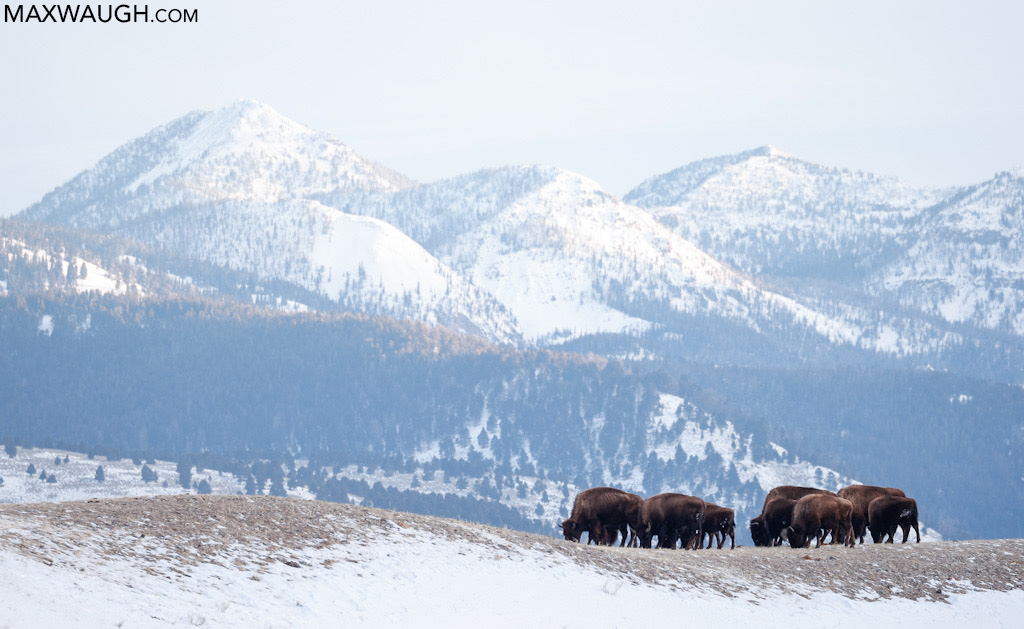 After talking shop with a colleague for a bit, I returned to the east. The wolf folks had scattered already. Not much to see, apparently. I made it to the Lamar, and halfway through pulled over when I saw some friends. One spied a shape out on the valley floor. She guessed fox, and was indeed correct. We haven’t seen any close foxes lately. So we hustled down the road.

There were three of us in a caravan, and I knew if the next pullout was empty, we’d all fit. It wasn’t. Only two parking spaces left. They had been there first and made the spot, so I ceded my place in line and continued down the road. It was probably a kilometer to the next parking spot. I needed the exercise.

I knew it was a bit of a long shot walking all the way back. The fox was circling in the snowy flats, but inching closer and closer to the road at the same time. I had a feeling I wouldn’t make it in time, and sure enough…

Nice weather for a walk though.

I returned to Silver Gate for a meeting, and was back out in the afternoon. I ran into a friend at Pebble Creek, who asked about weasel tracks. So I went and showed him some… we got caught up slogging around in the snow, following tracks (which were likely old), but mainly just hoping an ermine would pop up randomly out of the willows for us.

Meanwhile, folks were enjoying fox and otter sightings elsewhere. Oh well. If I didn’t have another week here, I might feel more pressure. But it was a good way to enjoy a pretty day out in nature. For many years now, Yellowstone has been about more than just the animals. As I wrote back in 2015, it’s a home away from home because of the people. And on this trip I was able to spend a lot of quality time with folks I previously didn’t know well (or at all). That type of interaction isn’t for everyone, but it helps make this and future trips more special for me.

That said, I still hoped I could make my last solo day count behind the lens!

Sort of a normal start today, and I buzzed on through the Lamar while seeking out furry or familiar faces (in some cases, they’re one and the same). As I passed the spot where the otter was seen yesterday, I slowed, hemming and hawing about whether to make a quick jaunt out to the river to check. But then I thought it might be better to look later, closer to the time it was seen on Friday.

And thus I forgot the first rule about otters: they are completely unpredictable and don’t seem to stick to a set schedule. Since I was driving away and uphill from the location, I didn’t have a good angle to look into the riverbed. A friend of mine, coming in the opposite direction, did… and he saw the otter right after he passed me. Fortunately, I did not have to rue my decision later.

I made it all the way to Hellroaring before turning back. It was when I returned to the Lamar that I saw the small gathering out near the river. That’s when I learned about what I had missed. By the time I shuffled down, the otter had disappeared. A coyote showed up around the same time, probably also wondering where it had gone. After a short wait, we saw folks farther upriver setting their lenses on something, so we knew the otter had moved on.

We went over, and waited and waited. Most people left. We stood there for… I don’t  know. It seemed like an hour. I spotted the otter peeking out of the ice briefly before it disappeared. It didn’t peek up again, so I thought it might be on the move once more. I hustled back along the shore to warn other folks to watch a couple of thawed patched in the ice downriver (the most likely place it would surface)… and just as the words exited my mouth, there it was.

After some time and a long slog, we were at last rewarded for the effort with a nice long otter encounter. On the way, I stopped to document my first close-up view of otter slide marks. 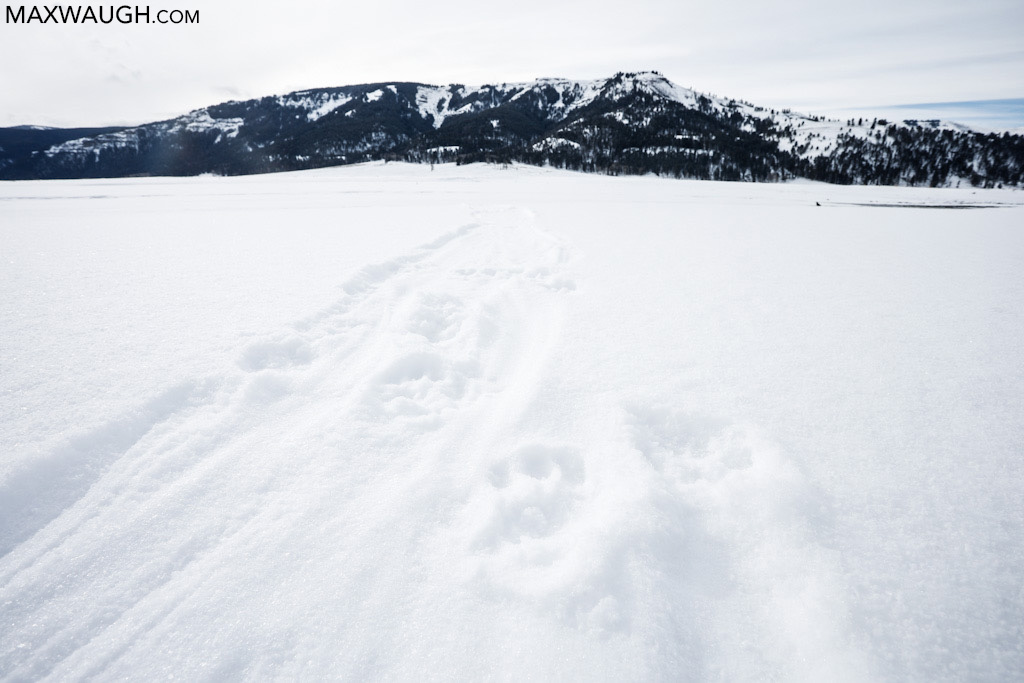 The encounter itself was nothing too dynamic, but the otter came out into the snow a few times, so we got more than just a peeking head while it hunted under the ice. 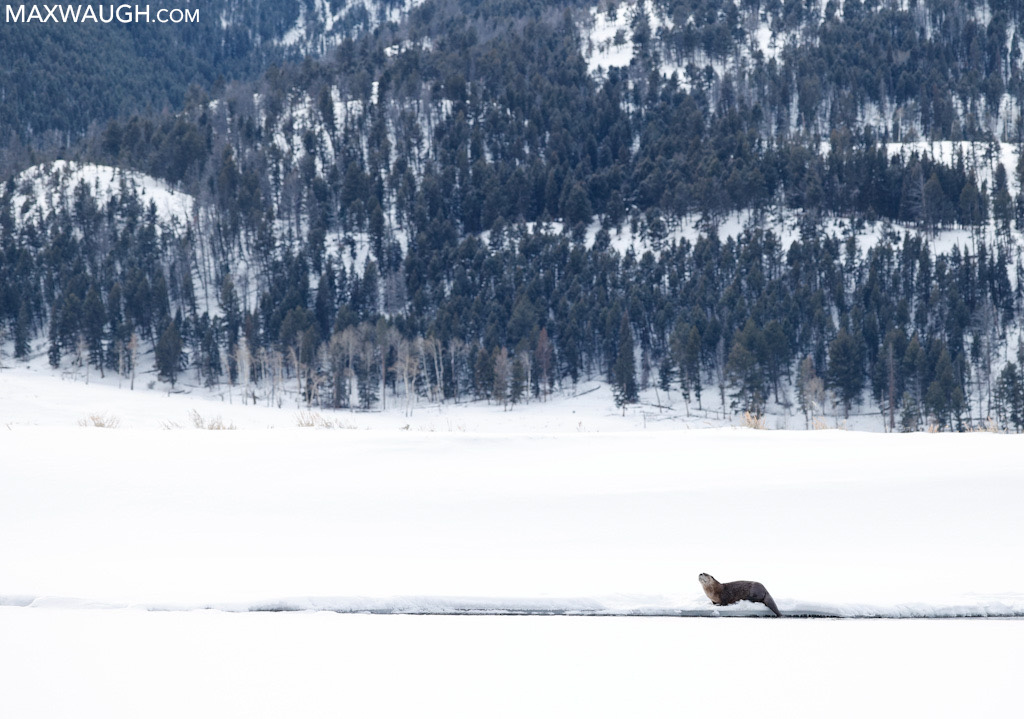 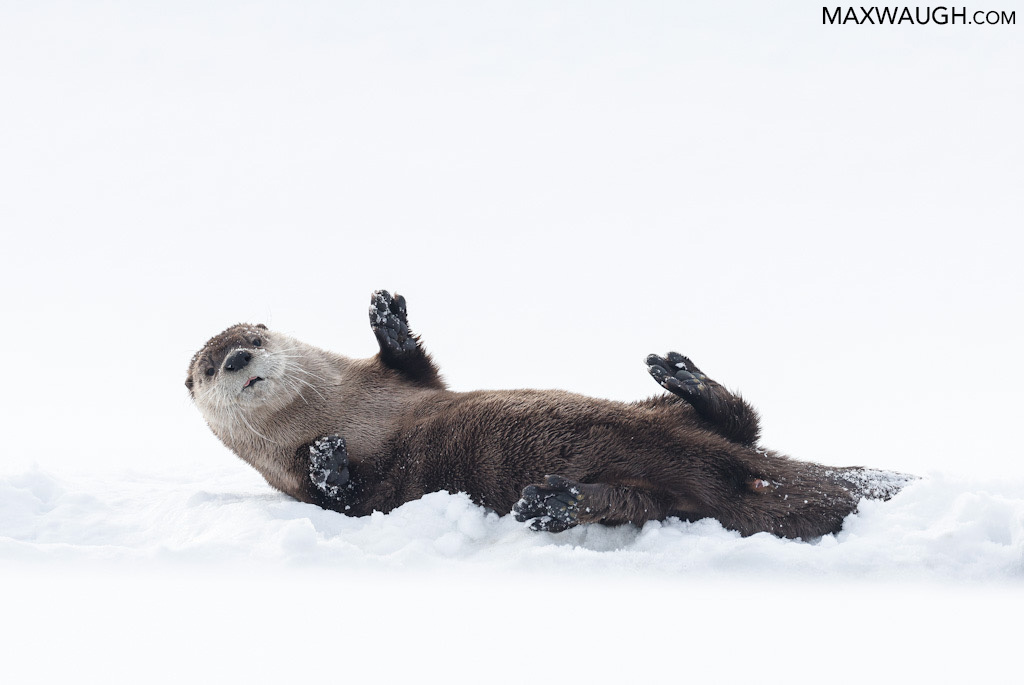 This was literally the only thing I photographed today, and I’m just fine with that! It was a nice way to end my solo exploration. Tomorrow I head out to pick up clients, and we’ll begin the tour with a few days in the park interior.