Client pick-up day! My main goal was to get down to West Yellowstone with my group before an expected storm was due to arrive. The drive between Bozeman and West isn’t very fun in inclement weather.

I was getting concerned driving through the park, where snow was already falling. On my way through the northeast, I was surprised to run across a friend, who was supposed to be flying out on Sunday. Ahead of his departure he had driven all the way across the park one more time in total darkness in order to get in one final wildlife drive. I playfully ribbed him about being “hard core,” and we parted ways.

Later I learned that fifteen minutes after our meeting, he scored a dream encounter with a black wolf right at the road. Hard core indeed!

Despite my concerns, weather cleared on the drive to Bozeman. I was able to run final pre-tour errands and pick everyone up, though by then the snow was coming down again. Fortunately, the drive south wasn’t too bad. We arrived in West Yellowstone safe and sound.

First day in the interior! We had a common goal. A bobcat had been seen on the Madison in the past week. I still have never seen one down here. Always a week (or less) early, or a week late. Maybe luck would change this time around.

We made a few passes along the river. Swans, a bison… no cats (or dogs, for that matter). In fact, not many fresh tracks at all. We moved on. The sun was coming out (a bit of a surprise), so why not explore further afield and see what we could find?

To the north, then east from Norris. Loads of snowshoe hare, weasel, and marten tracks dotted the snow. No animals, however. After a stop at Canyon (there’s always a hope for the resident martens there, but not this time), we started south. First stop had to be the Chittenden Bridge, where there’s often otter sign… but never otters for me.

Today was different! A client spotted an otter popping out of the water just south of the bridge. It appeared and reappeared every so often over the next ten to fifteen minutes. 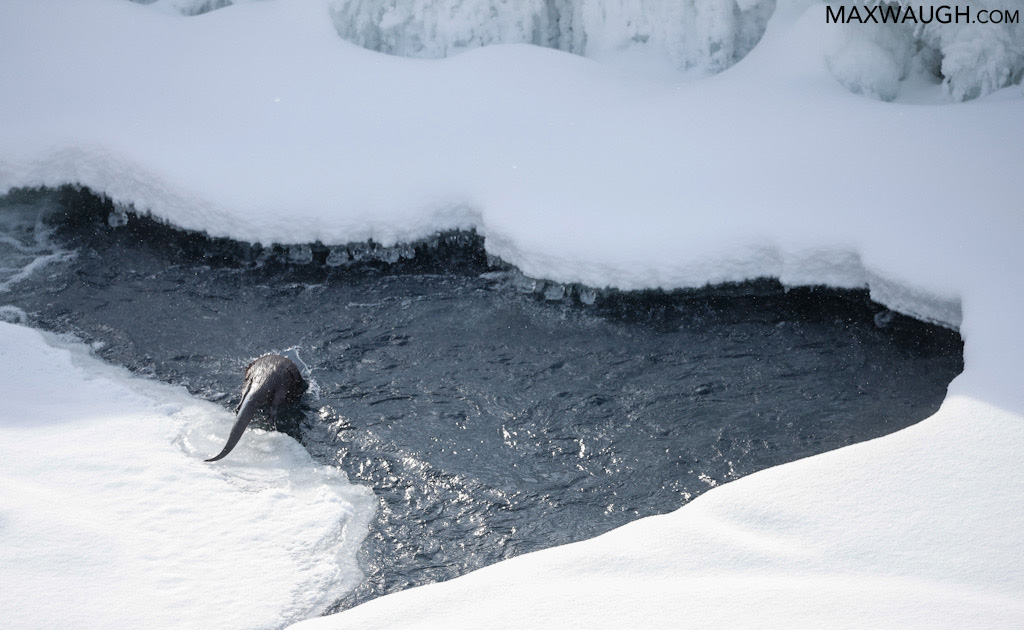 We hoped Hayden Valley might yield some canid sightings, but it was a quiet ride through. So many teasing ermine tracks, but just like last year, the critters never appeared.

At Mud Volcano we stopped to photograph a Bald Eagle sitting in the frosty, snow-encrusted trees. Bison foraged in the distance. 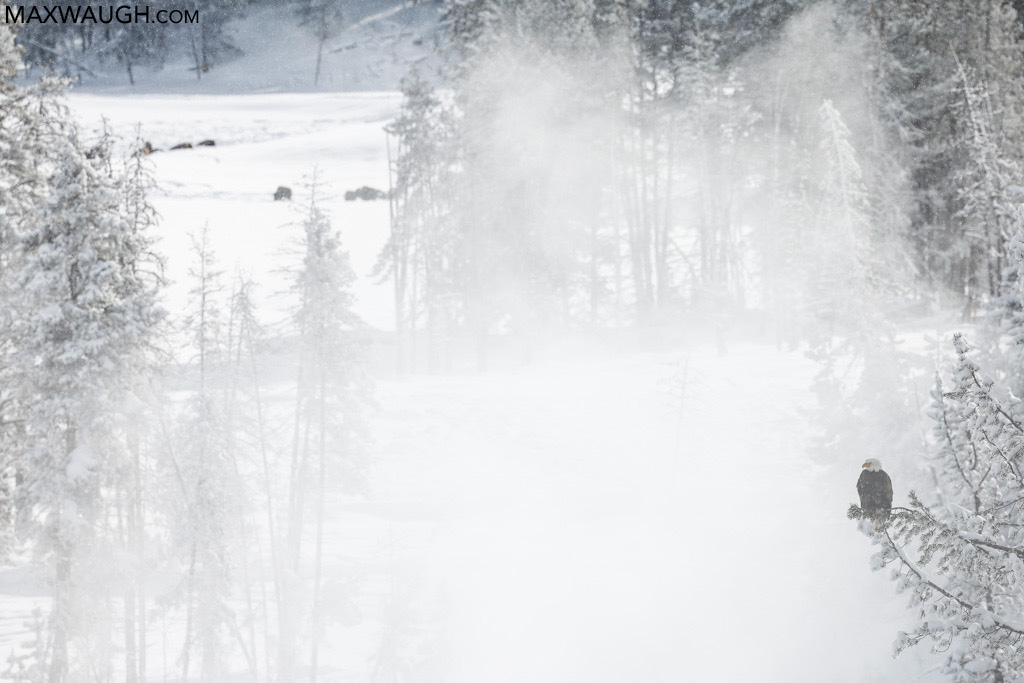 While walking down the road a bit to try a different angle, I heard a shuffling sound. I looked up to see a red squirrel dancing all over the trees. It eventually snagged a pine cone and went to town. 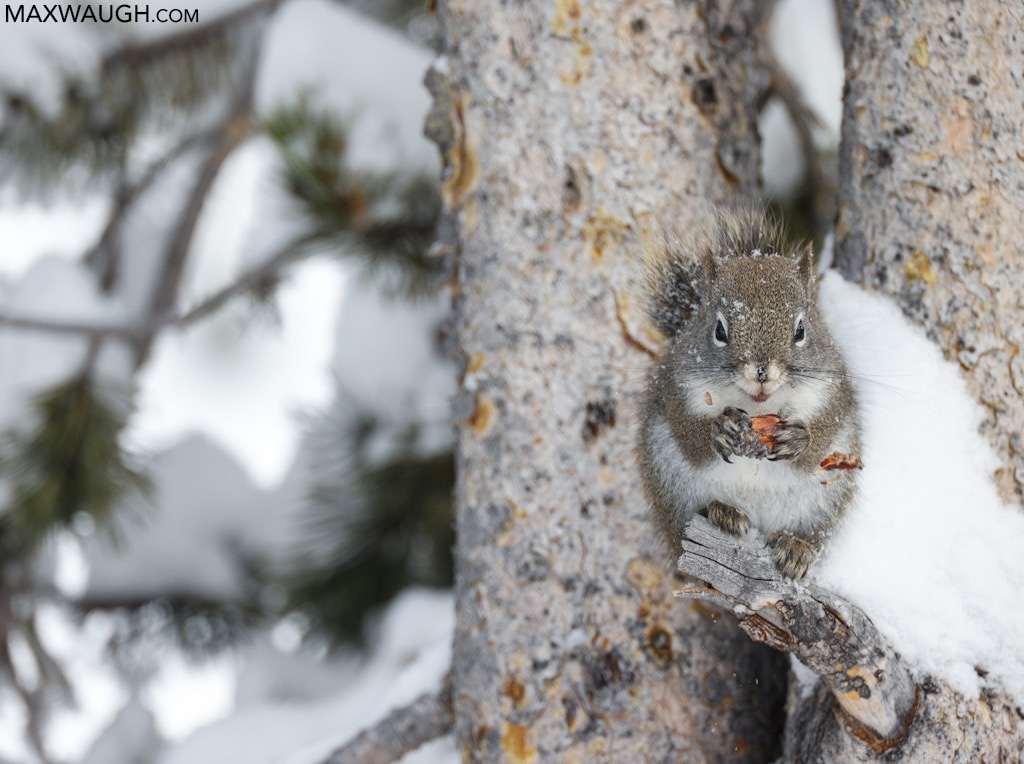 A fun shoot, and pretty soon we were stopping again, this time for bison. After a while, part of the herd came onto the road, led by a proud-looking cow. Steam billowed, and snow soon began to fall. 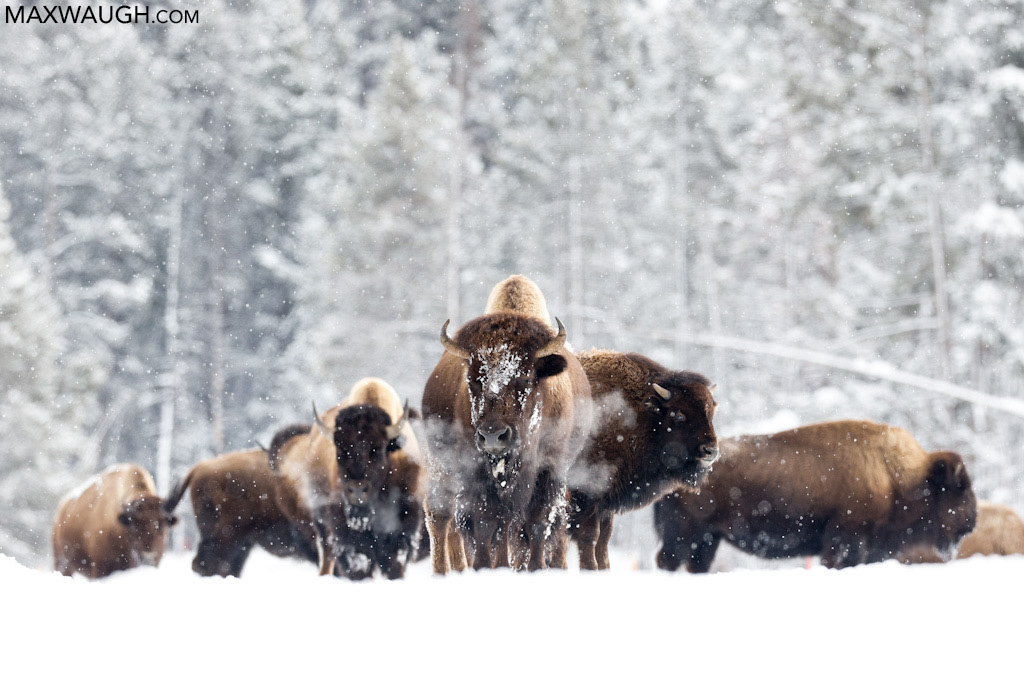 On our way back north, we stopped in the valley for lunch. A raven flew in hoping for a handout, while a coyote roamed a distant hillside. travelwithgirls.com. 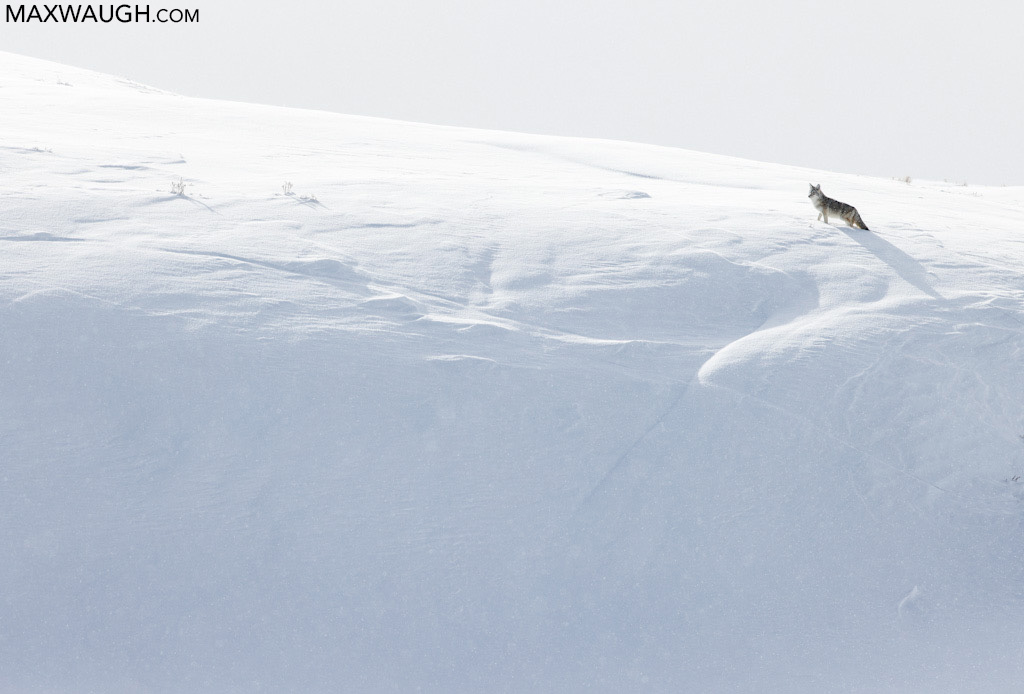 We returned to Canyon without further sightings. Then it was time for the drive west to Norris.

On the Canyon-Norris Road, what’s the last thing you’d expect to see?

The correct answer, of course, is H) All of the above. Because you’d be asleep. Because nothing is ever on this road.

Actually, that’s not entirely true. We not only had a wildlife sighting on the Canyon-Norris Road, but we had one of the most unexpected sightings I can remember. An otter ran out of the short pines on the right side, came down to the road, ran across in front of us, and up the opposite snowbank before disappearing into the trees on the other side. We couldn’t believe it, but quickly got out to investigate even though it was long gone. Sure enough, it slid down the first hill to the road, and once it got up the hill on the other side, it slid through the young lodgepoles.

It’s a risky proposition for an aquatic animal to travel long distances over land. Then again, the sight of a large brown furry snake slithering through the forest is sure to freak out even the most intimidating predator.

The day ended with a couple more passes on the Madison, but this would not be our cat day. Still, a fantastic first day in the interior!

It began with the usual interior routine: look for cats, and strike out looking for cats. The first real decision came afterward. North or south? We opted to switch it up, driving south toward the geyser basins. Some wildlife possibilities still existed in that direction, but we knew we’d have some opportunities to capture some scenery as well.

A Bald Eagle perched in the morning frost above the Firehole River. Then the landscape opened up a bit. 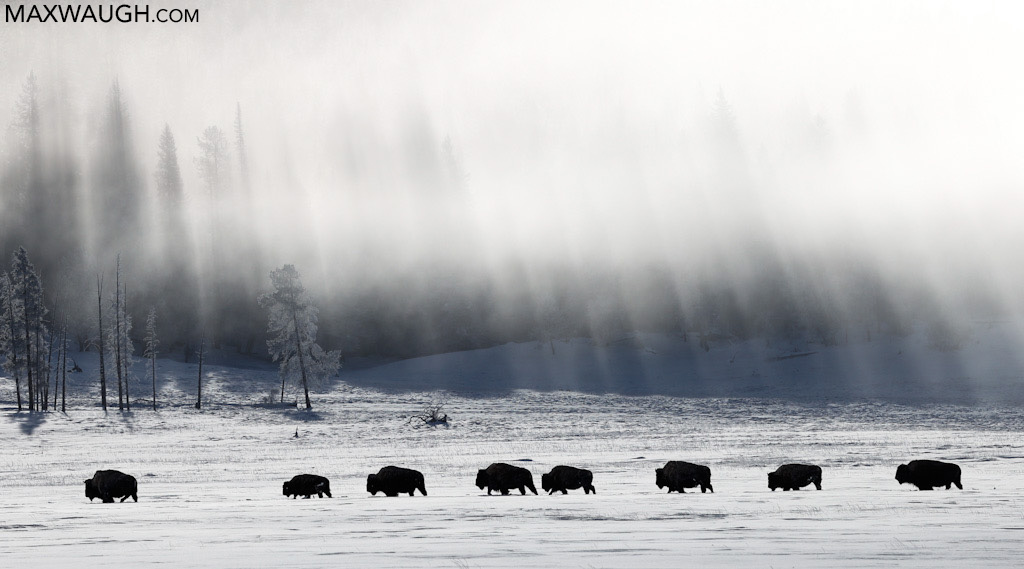 Low-hanging mist from the nearby thermal activity made for some great eerie landscapes. Sometimes accompanied by bison. Other times, we were happy to… I mean, we settled—yes, that’s it—for actual landscape photography. 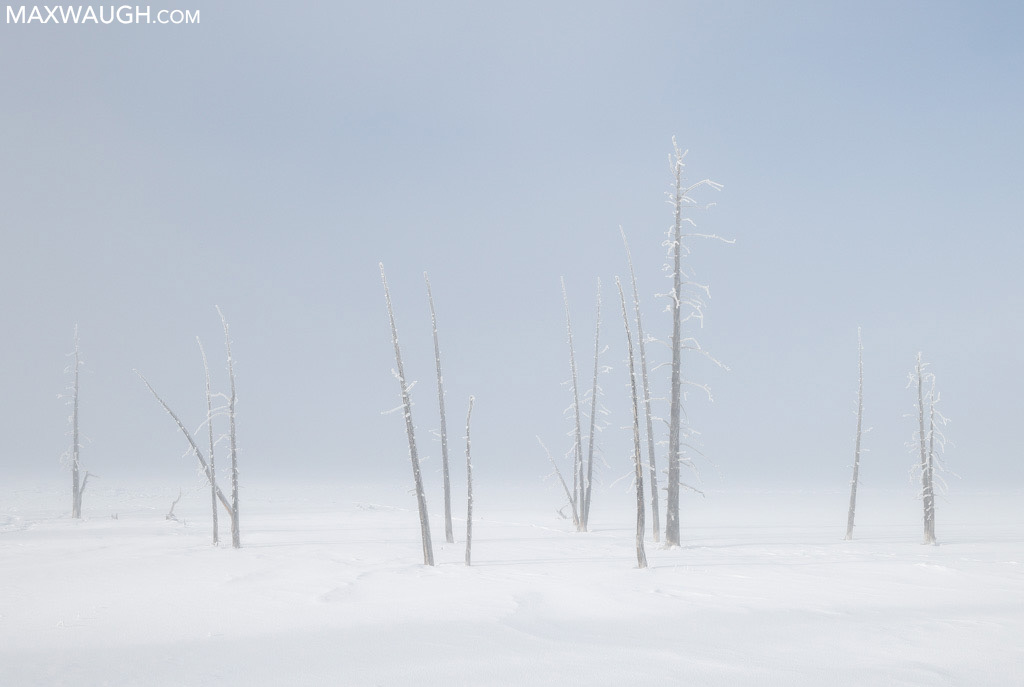 Either way, we really were enjoying the mood the park interior presents at this time of year, so different from anything found anywhere else in Yellowstone in any other season.

After several stops, we finally arrived at Old Faithful. The geyser wasn’t due to erupt for a while, so we chose not to wait around (the one tour participant who has not seen it was fine with this). It was still morning, so there was time to drive all the way up and around to the east side and check for more wildlife activity there.

Beyond a lone bison trudging up the road, we didn’t have to pause for anything along the way. Not even a random otter between Norris and Canyon (though we found possible sign of at least one other passing there).

In Hayden Valley we did spy a too-distant fox. The usual ravens and swans could be see as well, and a male Hooded Merganser continued to swim in the Yellowstone. But we didn’t snap any photos. So back we went.

Back to the Madison River, that is, where we quickly spied a healthy-looking coyote patrolling the shore. 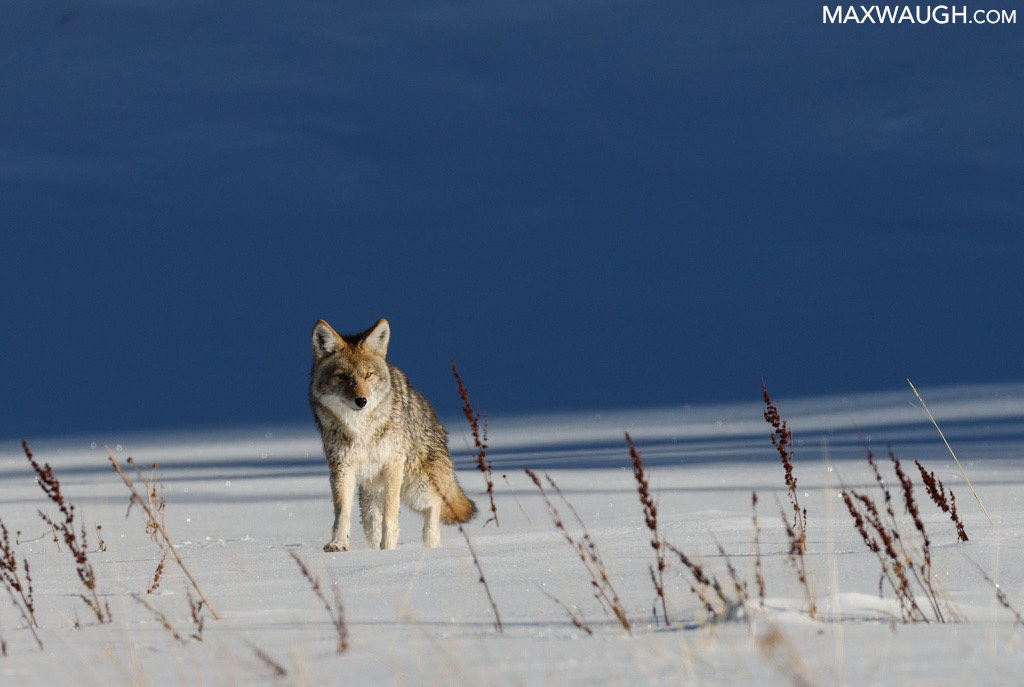 Unfortunately, any signs of cats continue to elude us. We’ve got one more morning to find it before heading for the northern range.