The Madison River is a wonderful place to be on a winter morning. At least, on the ones that feature at least a little bit of sunlight. The freezing temps lead to mist rising off the water. Filter some light through that and you may witness some mystical scenes.

This morning? We didn’t exactly get the direct light that normally sets the river ablaze. But there was a bit of color in the distance. As we shuffled through the snow, checking for fresh cat tracks along the river, the full spectacle on the horizon was revealed. I hustled back to get the group (“sorry guys, it’s not a cat, but…”). 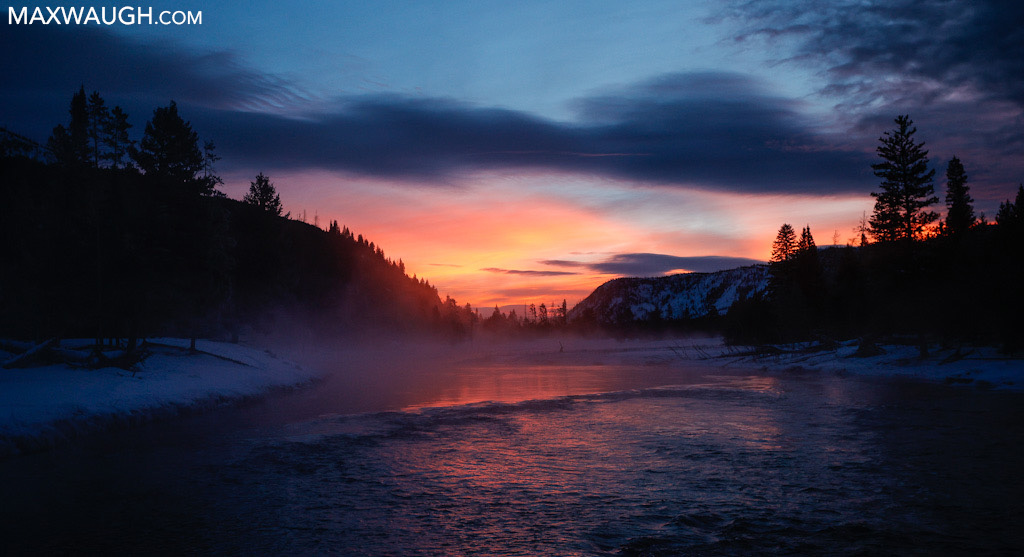 Since there didn’t to seem to any signs of new activity along the Madison, we elected to move on and make our way to the east side of the park, hoping that an earlier start might inject a bit more wildlife action into our interior adventure. Maybe Hayden would still be awake for us if we got there earlier.

It didn’t look like it on the first pass through the valley. Not until we started the drive back north did we find a predator of any sort, a coyote using an old bison track to approach the road. It made it up and began to trot northward.

Eventually we managed to pass it and found a safe parking spot some distance down the road. By then it had moved into the deeper snow on the valley floor. As it crossed before some distant trees and low-hanging fog, we were ready. 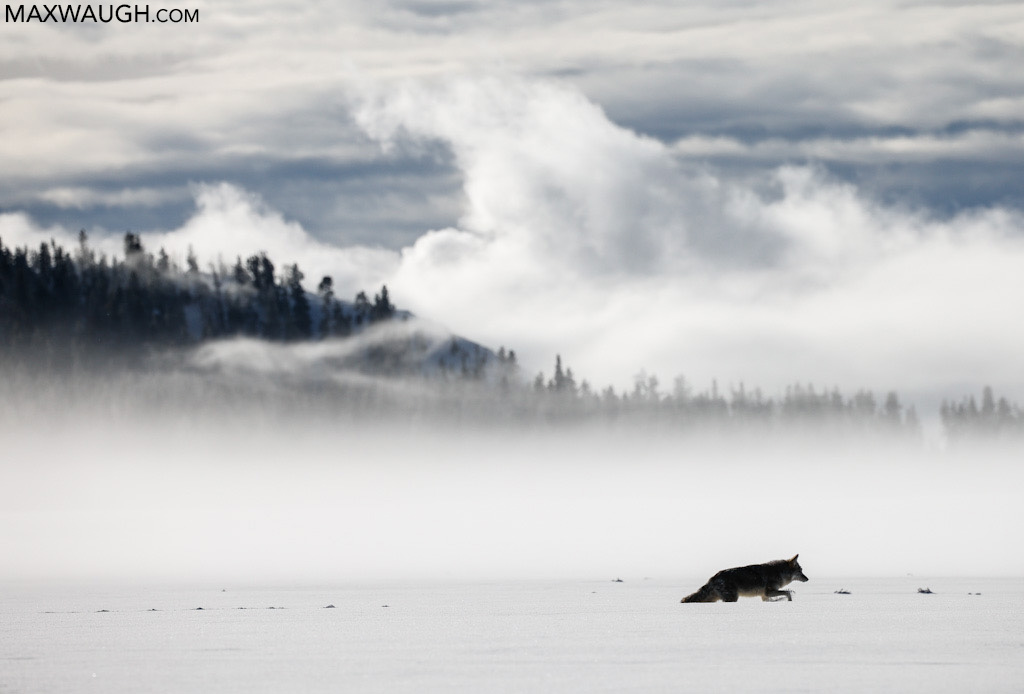 We lingered a bit too long after the coyote disappeared, missing the river otter at the Chittenden Bridge by five minutes. It did pop out in the distance, but kept working its way along the river and out of sight.

The remainder of the drive was uneventful, aside from a Bald Eagle that perched briefly above the Madison… 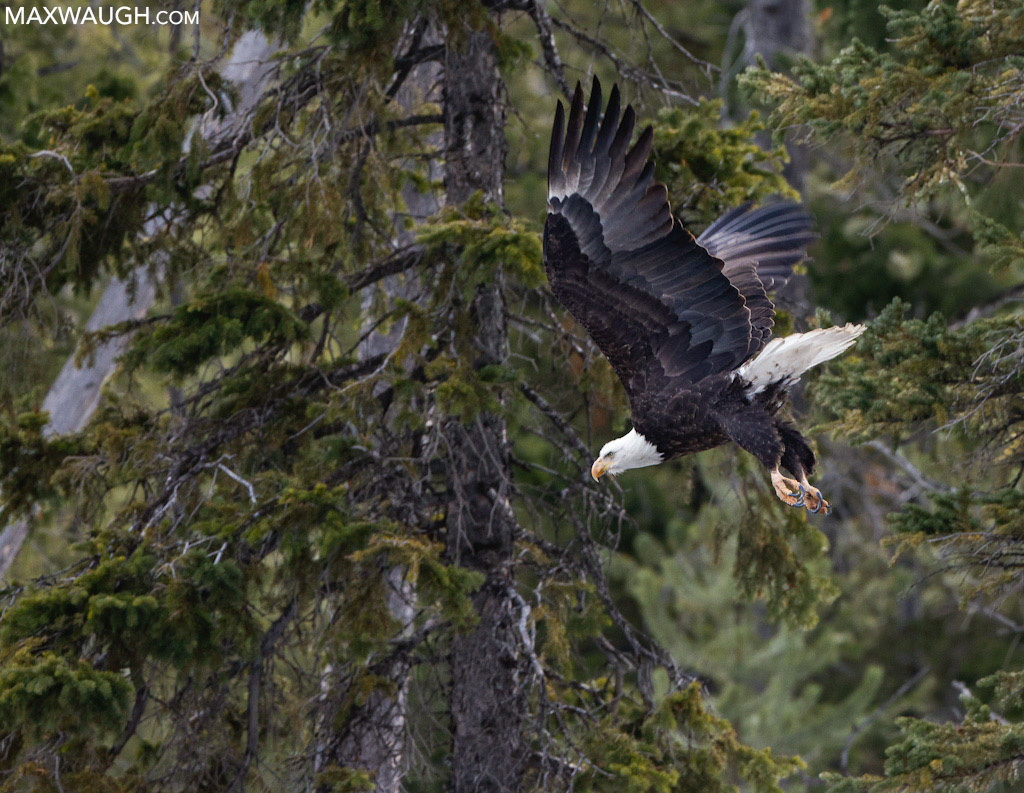 …so we wrapped things up in order to make the long drive up and around to Gardiner. Northern range exploration would begin on Thursday.

On our first day exploring the northern range on this tour, we didn’t hustle out of Gardiner super early. Many people seemed to be excited about wolf action in the north, but we chose to accept whatever was presented on the way. We followed up on a lead along the way, then continued eastward. Whatever wolf fun folks had hoped for was not materializing. Wolf-hungry drivers roamed and parked over a stretch of several miles.

As we rounded a bend at one point, we witnessed a moose trotting across the road in the distance. It eventually headed over in our direction before pausing at the tree line. The moose’s attention was quickly directed toward something out in the meadow beyond. 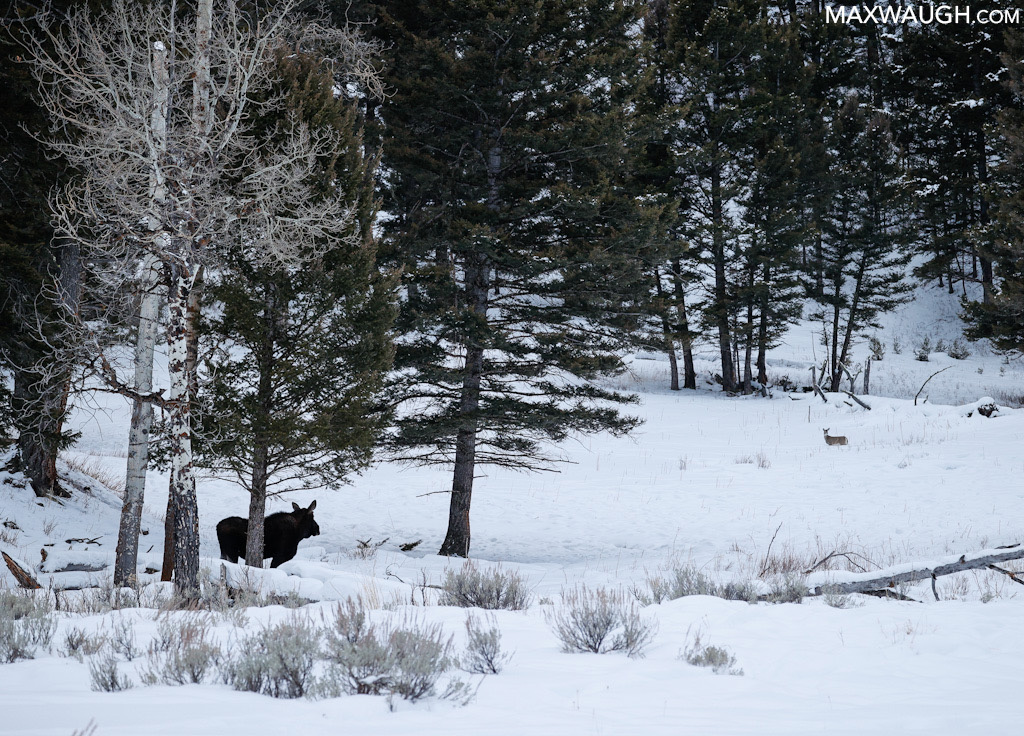 A trio of white-tailed deer appeared, but were soon spooked, bounding away through the snow. This, in turn, scared the moose, which turned around and worked its way back through the trees and up the hill.

For some time, we strained to find anything of note to photograph. But, as they often do around here, circumstances quickly changed.

Driving through the Lamar Valley, we spied a coyote working on a carcass. A Black-billed Magpie perched in the snow nearby. The magpie is actually what piqued my interest. It provided a nice, bold secondary subject to pair with the coyote, so I immediately looked for parking options.

Remember when I gave up a parking spot in a small pullout last week and was forced to hike back a ways, only to miss a photo op with a red fox? Today we approached the same pullout, but miraculously, someone was pulling out just as we arrived. We parked and marched up the road.

Soon after we set up on the coyote, I began to notice something odd. Whatever was being consumed had fur that was abnormally reddish. I wondered…

While the coyote worked the carcass, the magpie danced nearby, much to the canid’s annoyance. Soon we were treated to several chases. Some wonderful interaction between the two scavengers.

I continued to be suspicious about the scene in front of me. The fur peeking out from the snow where the carcass lay didn’t seem right. Then I saw an ear. The coyote was eating a fox! Most likely last week’s fox that was hunting in this same area.

Whoa. This was different. There have been some documented incidents of foxes cannibalizing other foxes in recent years, and I’ve certainly heard about coyote-on-fox predation (Update: Video has been shared on Facebook depicting this kill), but this was my first time witnessing such a circumstance.

It took some time for the coyote to bag its groceries. First, it picked up the fox’s head and was ready to walk off with it. Then it realized it didn’t want to leave anything to the magpies. So it managed to pick up both pieces—head and body/tail—and haul them off. 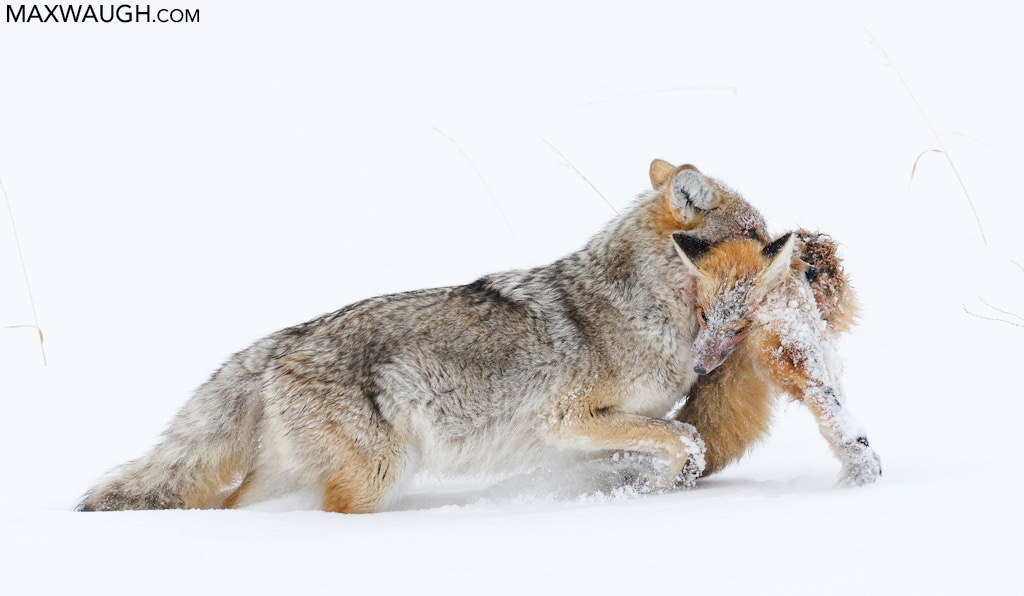 As the coyote moved away, a Bald Eagle swooped in and snagged a leftover. 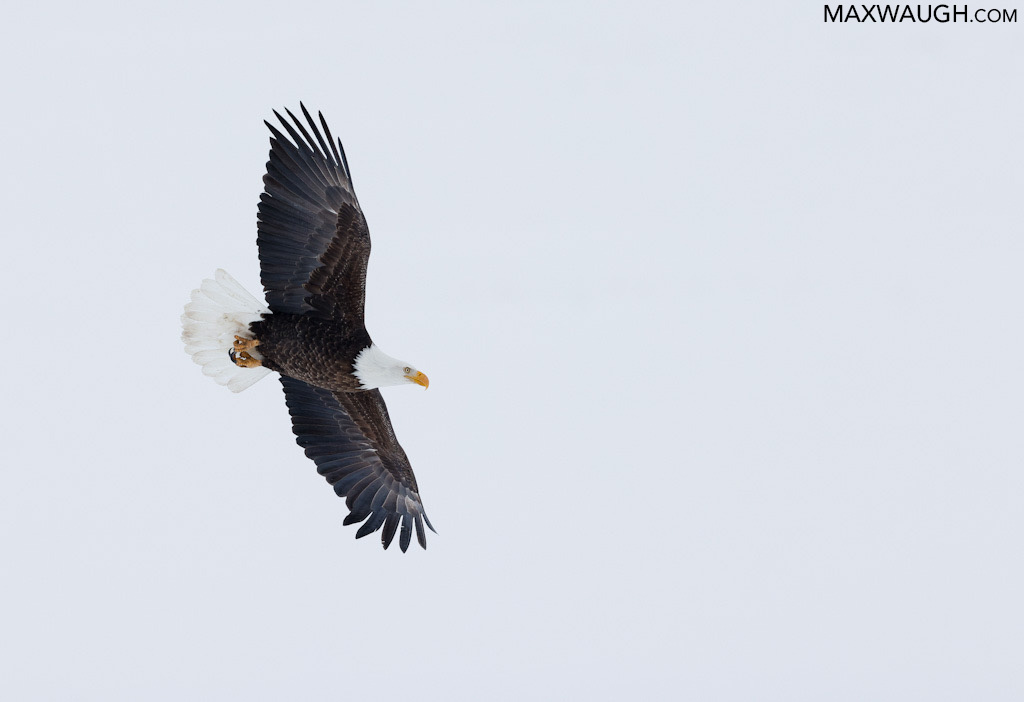 This was, without a doubt, a truly unique sequence in my personal Yellowstone history and (so far) this highlight of this trip. What a cool series of moments to witness!

The rest of the day paled in comparison. We did have a chance to photograph the bighorn rams near the Confluence after they crossed the road. 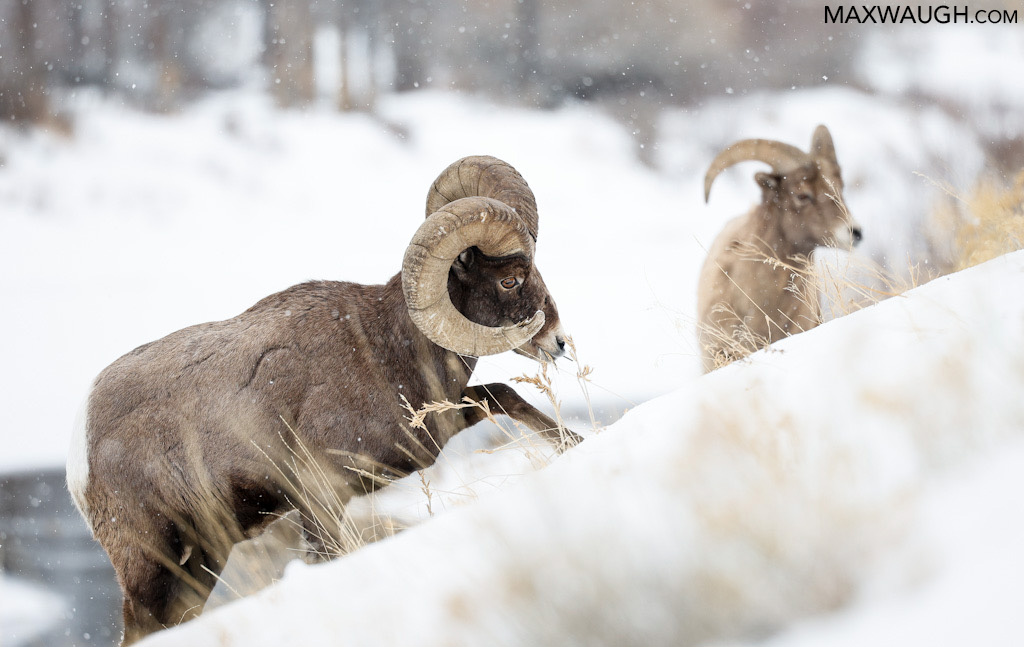 And that was it for the day. The buzz from coyote/fox was still wearing off as we returned to Gardiner. There was a brief wolf tease on the way, but we never caught sight of them, so we didn’t get our Three Dog Day. No complaints!