After one of the most unique wildlife moments I can recall in recent years here, we had a whole day that definitely ranks up there in terms of a special and rare combination of wildlife sightings.

A day during which I took almost no pictures.

It all began with a bobcat. That’s right. At least, that’s my story. I saw a bobcat. None of my clients saw it, since it vanished while everyone was piling out of the car. We waited around for an hour hoping it might re-emerge, to no avail. My fourth bobcat on a Yellowstone visit… and still no decent photos to show for it.

Three yelping coyotes greeted us down the road, but with no safe place to pull off, we missed whatever photo opportunities may have been had. We also missed whatever wolf action may have occurred this particular morning (sounds like there were only fleeting glimpses). Subsequent hours were spent quietly driving and searching for something notable.

Since we were heading in the right direction, I suggested continuing to the northeast, all the way to Silver Gate, for lunch.

When we arrived in town, I spied a neighbor and stopped to say a quick hello. They’ve had a pine marten coming through on and off, and extended an invitation to us to stop by if/when it happened to be around. Following lunch, after making a quick run toward Cooke to check for roadside wildlife, we were prepared to return to the park… until we passed their place and were beckoned. The marten was there. I asked my group if they wanted to stop, receiving quick and eager confirmation.

It’s important at this point to make something clear. This is not the place in our town that is so well known for marten sightings (where photography groups specifically visit to photograph them). Nor is this marten baited… but I would say it’s habituated, since it’s more used to a human presence than a most wild animals. On its way through my friends’ property, it sometimes scavenges bird seed that’s dropped from winter feeders. So marten visits are often an unintended consequence of feeding the birds here.

As a result, I didn’t take a single photo during the hour-plus long encounter.

But what a great encounter it was. My clients came away extremely happy, and later pointed to this as one of the highlights of the trip. However, I couldn’t lift the camera to snap a frame. I initially grabbed it just in case I’d change my mind, but quickly figured out that I was okay not taking pictures.

It’s not so much a question of ethics. This isn’t a situation where someone’s baiting animals for photography, something I wouldn’t want to include in a tour. In recent years, I’ve even halted baiting practices in certain tour locations or removed those stops from my itineraries when I learned that the animals were enticed by human-provided food.

This is more about personal—perhaps in my case, professional too—fulfillment and motivation. For me it’s definitely not the same as encountering this wild animal by chance or locating it by tracking, away from an (incidental) food human source.

There’s a special thrill that comes with running into one of these elusive characters in the woods, away from traces of civilization. So to me the challenge I normally relish and associate with photographing wildlife on its terms wasn’t present. I wasn’t feeling the enthusiasm that would usually accompany such a sighting. Keep in mind, in all my years, I have had only one Yellowstone marten encounter that’s resulted in (two) good photos. Out of maybe ten sightings. I could have produced a couple dozen more keepers on this day. It was a special opportunity. But as I closed up the car and followed my clients onto the property, I wasn’t feeling that tingle of excitement. So I just stood back and watched the fun.

For my clients it was a different feeling. They were experiencing either their very first marten encounter, or first good marten photo op ever. They were thrilled, and hopefully their photos will help others learn about this dynamic and handsome member of the weasel family. I was happy for my group, and grateful to my neighbors for the invitation. My clients were able to photograph the marten at rest, bounding from tree to tree, and perched at attention before it eventually departed. 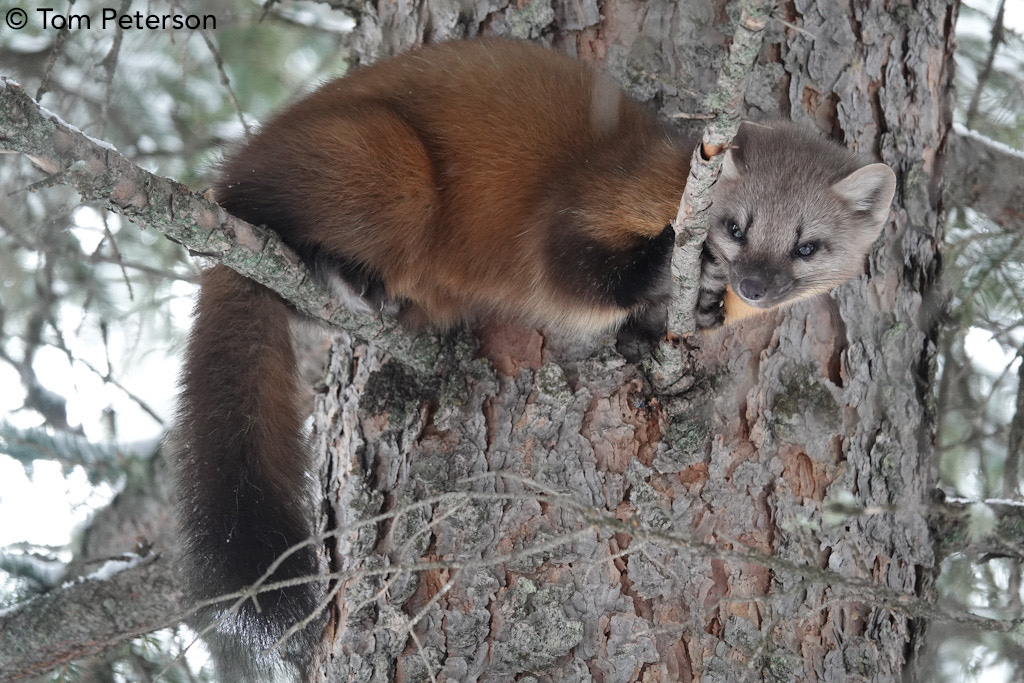 This is the type of sighting that’s often needed to help punctuate an otherwise “inactive” day. We had another one of those the previous day with the coyote/fox, and it seems that many of the days on this trip have been highlighted by one big encounter (pygmy-owl, otter, etc.).

It wasn’t our last “rare” sighting of the day though! Back in the park, we passed friends who had been out searching for signs of ermine. As we entered the Lamar Valley soon afterward, I caught a glimpse of something darting across the road waaay in the distance. It was so far away and so quick, I wasn’t sure if I imagined it, but I slowed and asked my passengers to watch for fresh tracks or the animal itself.

Lo and behold, right next to the road at the crossing point were a couple of ermine tracks and a hole in the snow. It wasn’t my imagination after all.

We set up across from the spot and waited. Another long stakeout, which ultimately proved to be as fruitful as our morning bobcat wait. Was the ermine still down in the hole, or had it tunneled under the snow and emerged up the hill out of our sight? We’ll never know, since we left after forty-five minutes when a snow storm rolled in. It was time to aim for home.

Three crazy animal sightings, and for this photographer at least, no photos (perhaps I need to fill this post with Bernie memes in their place). It’s an odd feeling, but ultimately I returned to Gardiner with happy clients, and that’s what counts!

Our final day on tour started much like the others, with a low key drive along the north road. It remained that way all the way until Round Prairie, actually, where we finally stopped for a bull moose (antlers had dropped) close to the road. 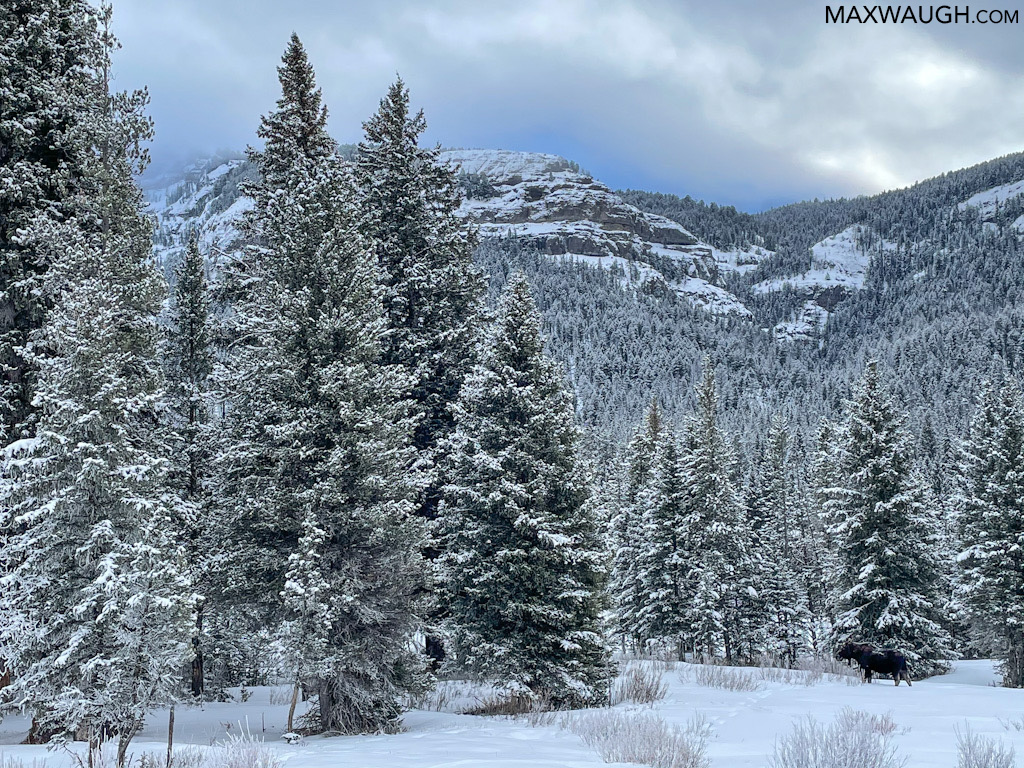 Unlike the rest of my days on this trip, we never had major excitement at any point. We missed wolves on a carcass on the first drive through. Many folks missed other wolves crossing the road farther west.
Instead, coyotes were prevalent throughout the day. We spied one working its way through the trees above Elk Creek. 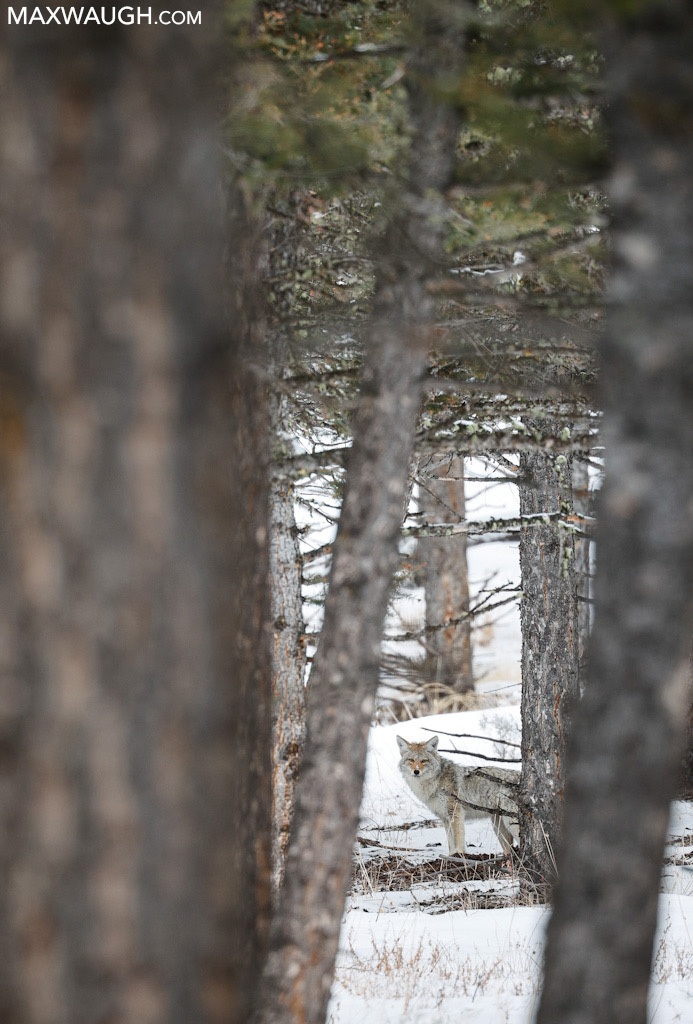 Not the first, and definitely not the last. We headed up to Silver Gate for lunch and to take care of a little business… i.e., purchasing a milkshake at the Stop the Car Trading Post! Just in the nick of time before the end of the trip.
Back in the park, coyotes continued to make use of the roads in the Lamar Valley. Most sported pudgy bellies and reddish muzzles, the byproduct of several visits to the carcass the wolves had abandoned in the morning. 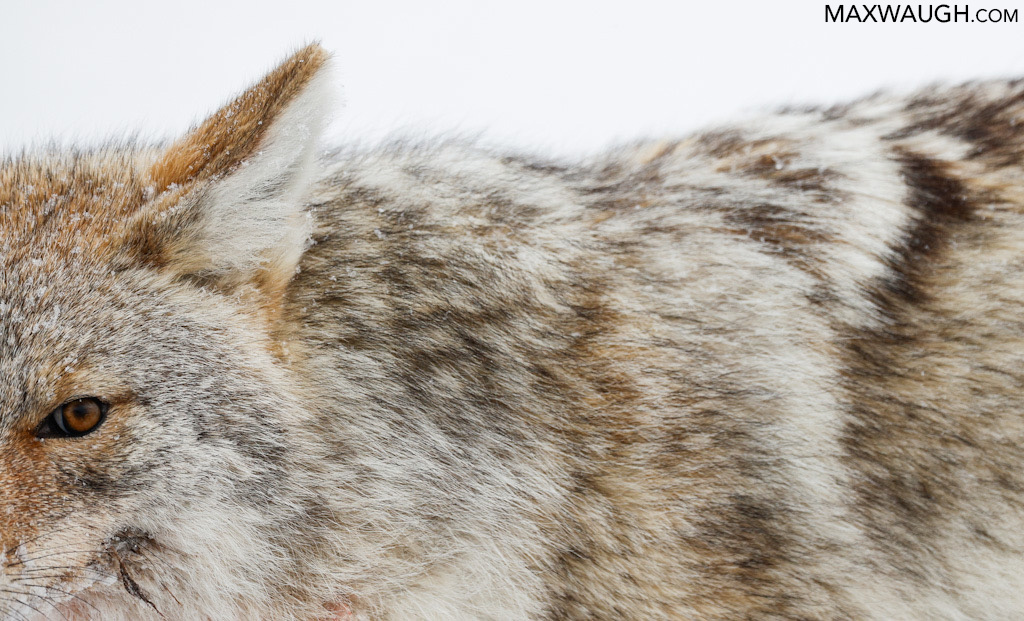 We finished off this last day with one final attempt at said wolves, standing in the late afternoon sunshine until the temperature plummeted in step with the sun’s disappearance behind the southern hills. Coyotes continued to come and go. Ravens and magpies surrounded the carcass. A Golden Eagle waited patiently for the coyotes to leave, but eventually gave up and flew overhead in the fading light. 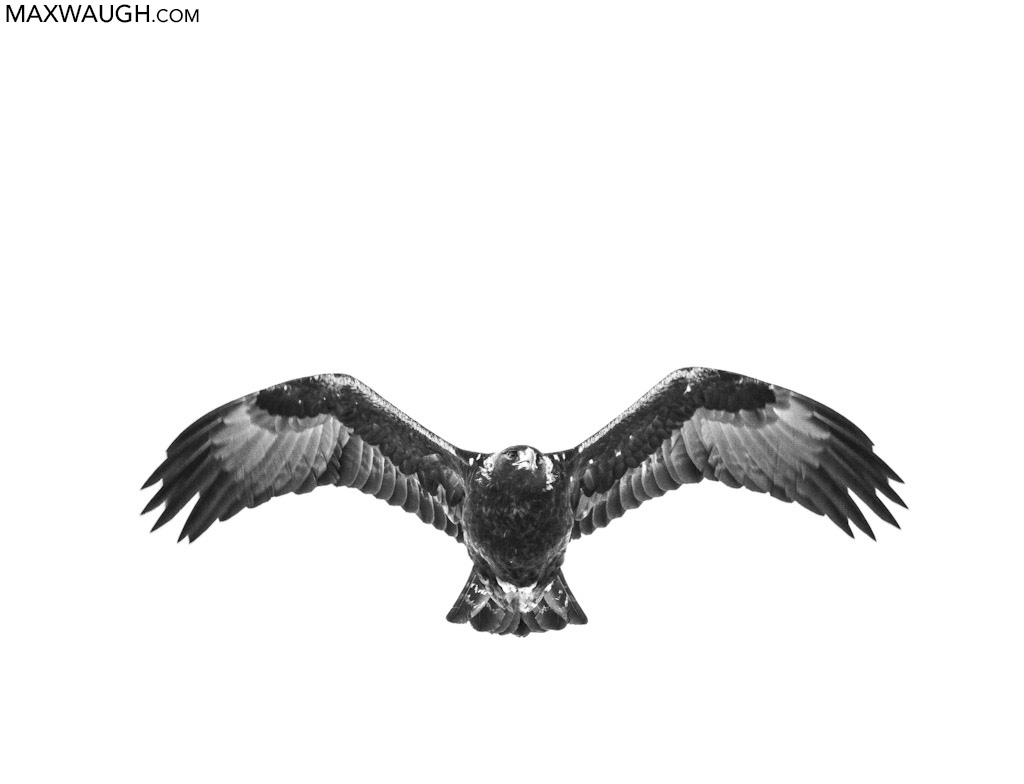 No sign of the wolves, so it was time to return to the car, warm up, and head back. We passed a ranger bearing a shotgun drawn, quite possibly in pursuit of roadside coyotes he could haze.
With no traditional last night dinner for this COVID-era group, we shared stories and our favorite moments from the week during the drive home. I’d like to thank my clients for committing to this adventure in abnormal times. We definitely made the most of it, and I appreciate that everyone put their trust in me and each other to make for the safest week possible!
I’m prepping to fly home now, but there is a chance I may be back out here next month for a private tour. Be sure to check back for new trip reports if that’s the case!
Interested in joining me on a future Yellowstone tour? The Spring 2021 tour still has spots available, and the next winter tour will take place in January, 2022.
Posted byMax
Tags:2021, bobcat, coyote, Moose, pine marten, trip report, weasel, winter, Yellowstone
0
0
Share: