This is “Part Two” of my winter 2021 trip report series, since I’m back in the park for the next ten days for a private tour.

Flying in to Bozeman, I peered out the window. It looked bright, which meant it also looked cold. Perfect.

After procuring a vehicle, lunch and some supplies, I drove south. It was tough to keep my focus on the road and watch for any deer ambushes. The frosted plumage of a Rough-legged Hawk caught my eye. As did a large herd of elk. And a pair of eagles battling in midair near a carcass. My eyes kept darting to the shoulders of the highway where, a dozen winters ago, I spied my first bobcat.

I also took note of the increased snowpack, especially as I neared Gardiner. There was a much healthier layer of white on everything, which was a good sign for the park itself. Yellowstone did seem to be under a thicker blanket as I drove east. The Lamar is looking much prettier than it was last month. Hopefully this will lead to easier wildlife spotting, and maybe some cleaner backgrounds for photography!

Along the way eastward, I paused to chat with some friends. Wildlife was fairly quiet for me, however. I stopped only one other time as bison splashed down the hill to the road. 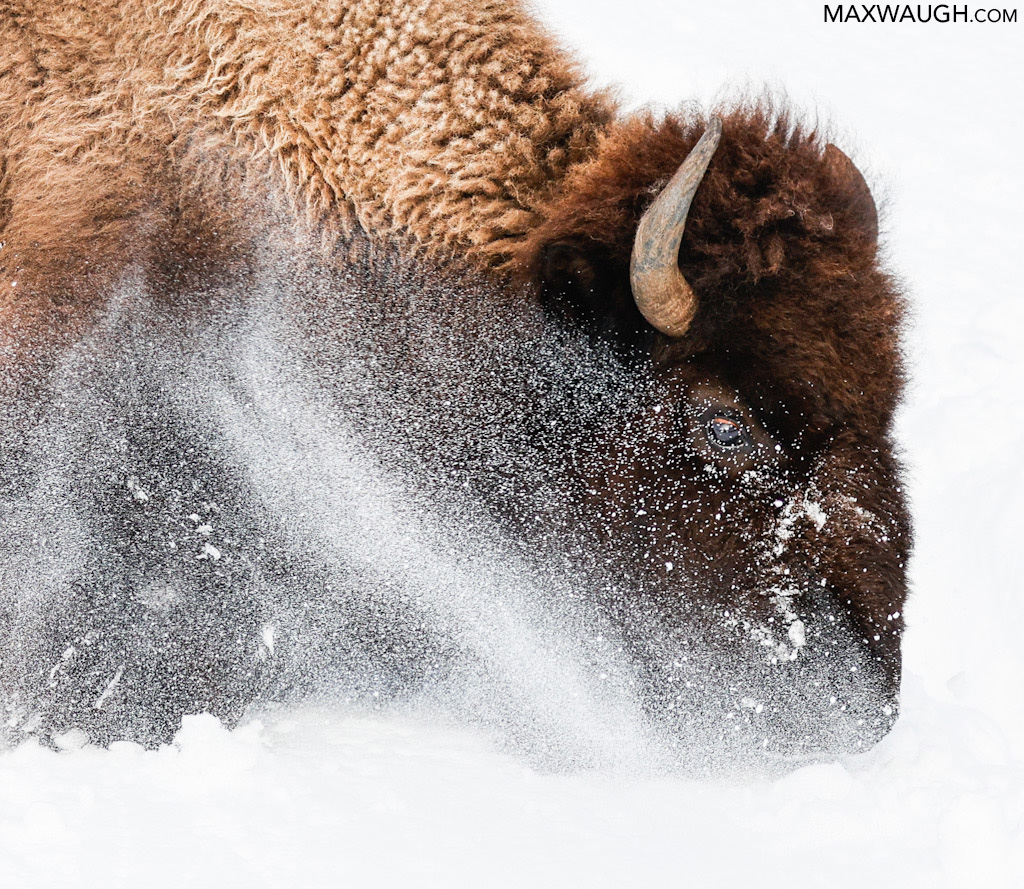 Otherwise, distant views of coyote, a circling Golden Eagle, and bedded moose didn’t entice me to slow down. I arrived in Silver Gate before dark.

Fourteen degrees and snowing sounds lovely, and I was happy to see more flakes falling Friday morning. The more snow pack the merrier!

Except, of course, when it’s thick and hazy enough that visibility in the wide open spaces is severely reduced. After the snow plow let me pass a couple miles into the park, I didn’t see another driver until Slough Creek. It’s like someone post a sign outside the west entrance to the Lamar: Nothing to See Here.

Technically, I did see moose. Two at Pebble Creek in the trees (surprisingly, one still had his tiny antlers…. his friends probably tease him that they’re not heavy enough to fall off, poor guy). Another pair of moose grazed in the willows at the Confluence. That was it.

As I drove through Little America, things were starting to clear up a bit. I saw someone pulled over with their lens pointed out their window. I stopped and spied something on a distant promontory. It looked like a coyote, but I snapped a quick photo to be sure. Though it was looking away, the ears looked right. Coyote. I moved on.

At Roosevelt a friend informed me that a wolf was seen bedded back in Little America… near the spot where I saw the coyote. I swear it was a coyote. But all the wolf people were headed that way. I felt it was prudent to double-check.

I was right about the coyote… but I had missed the gray wolf bedded in the snow much closer to the road! With its head down, it looked just like another rock. Fortunately, I found parking and was able to set up. The wolf would occasionally raise its head and look in the opposite direction, but it was some time before it finally stood, yawned, stretched, and looked our way before moving off toward the far slopes. 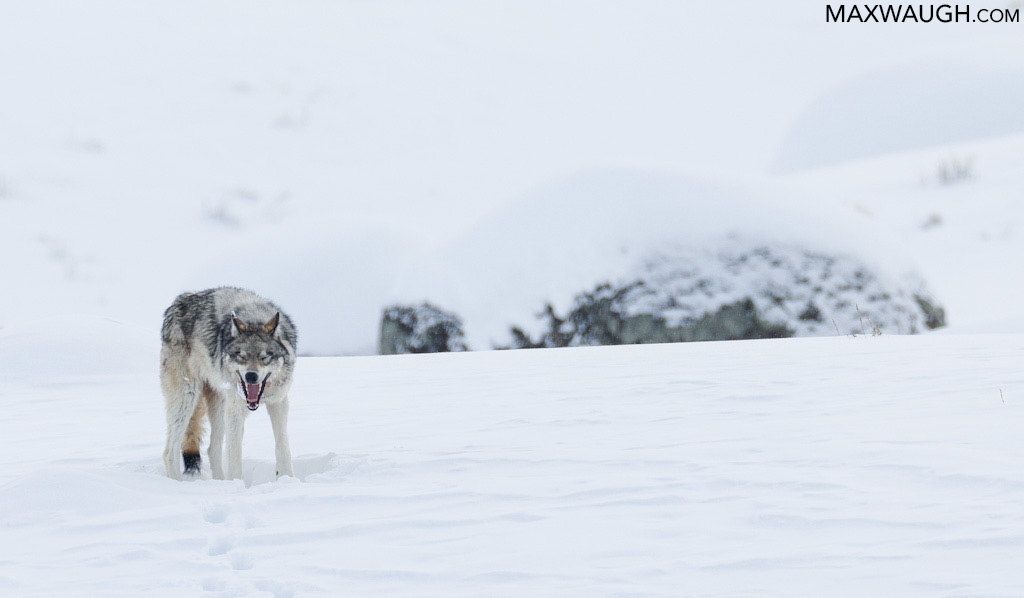 Not a bad way to kick things off!

Back to the west there was more excitement, as a fresh carcass was drawing attention. When I finally arrived, it was crowded and I had to park some distance away. I was walking back to join the crowd when three coyotes crossed the road 100 yards ahead of me.

It was actually a foursome, and they ran downhill (in the direction of the carcass). Over the next couple hours they lingered in the area and even put on a couple of nice howling sessions. 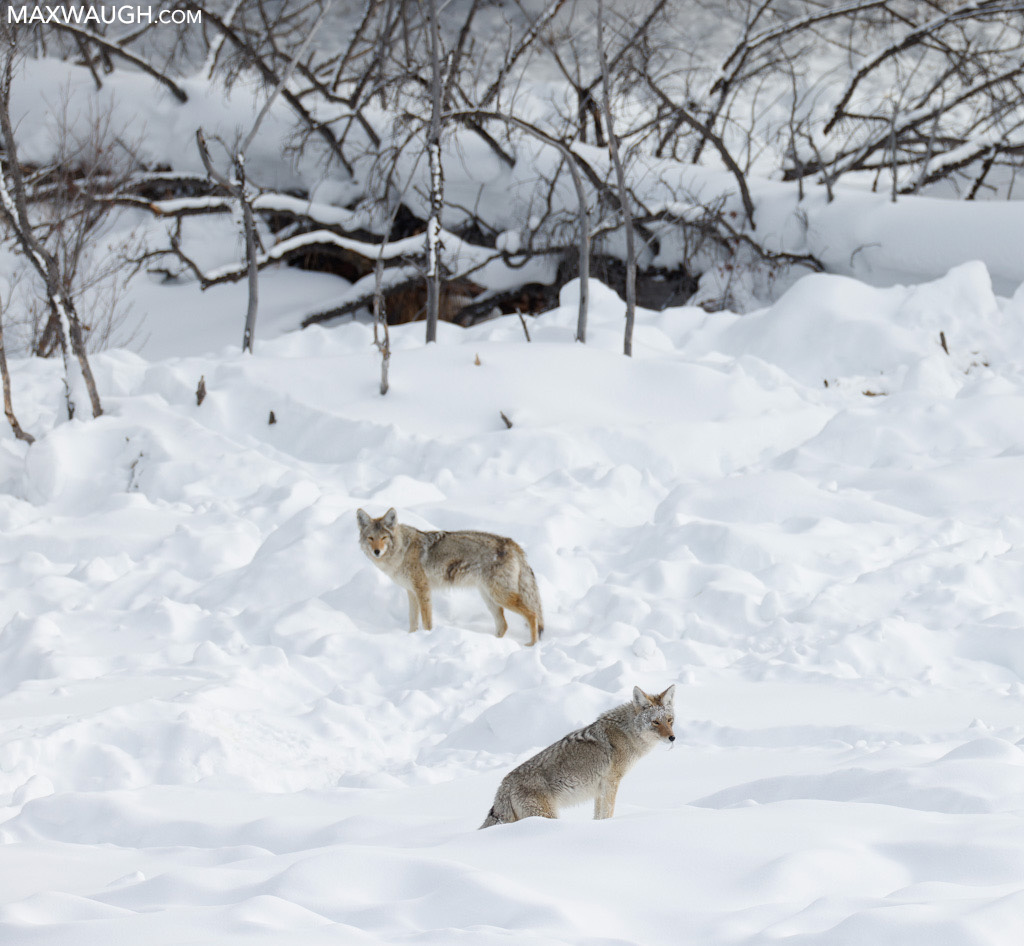 I waited around for some time. There was hope that wolves (which had been seen in the pre-dawn darkness, apparently) would come investigate the carcass. The sun was shining, things got warm, and I enjoyed chatting with friends for a while… but eventually I reminded myself that I only had two days on my own and, not feeling confident in an appearance by the wolves, I moved on. Lunch and, eventually, a fifteen minute power nap followed.

Awake again, I photographed the raven pair at Roosevelt… 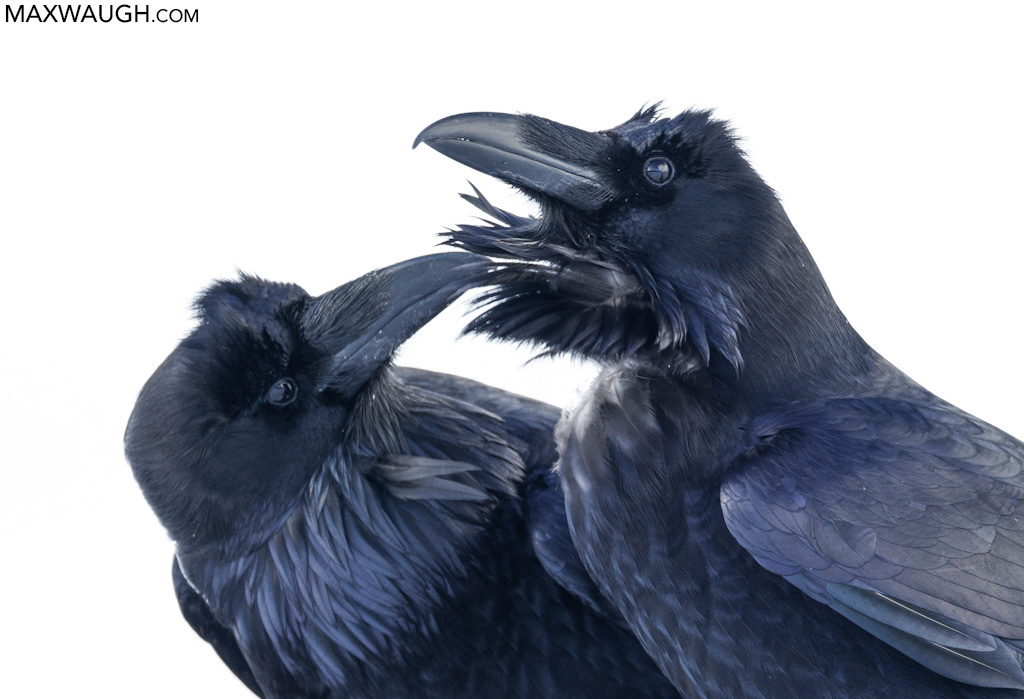 Before finally choosing to head eastward. Following a meeting with some other friends, I continued home. The day ended how it began: dark, gray, and snowing in the northeast.

A couple inches of fresh, fluffy snow sat on my car when I emerged from the cabin this morning.

Did you know that a lifelong friend of mine grew up to be one of the world’s foremost snow scientists? Being an expert, he typically refers to this type of precipitation as… Pow Pow. I shall refrain from using such exalted language.

It wasn’t quite as gloomy in the Lamar Valley this morning, but I didn’t see much in the way of activity. A very slow trickle of cars was working its way eastward, but it still seemed like most people were hanging back a bit. For good reason: the wolves had been busy.

Alltold, there were four different wolf “hot spots” in the northern range today. Hunting, visiting old carcasses, cleaning off a brand new bison carcass taken down overnight, or just hanging out on different sides of the river and howling in longing.

The problem in situations like this: which location do you pick? I appeared to have missed the pre-dawn show at the previous day’s coyote-infested carcass, and I didn’t want to wait there again. By the time I reached the fresh bison kill, the park service was dragging it away.

So I continued to the sighting that was farthest west. At the very least, I figured I’d make my way out of the park to drive the Boundary Road before circling back around and back in again. However, I found a decent-sized crowd and several acquaintances waiting out the 8-Mile Pack. They pointed me to two individuals, high in the hills, almost obscured by falling snow. But you could hear them howling. The rest of the pack had been seen a ways away on the other side of the river, so everyone was waiting to see if there would be a reunion.

It wasn’t to be, but I had good company, said goodbye to those departing the park, and then drove into Gardiner to gas up, grab lunch, and take care of a little business. All while wolves were returning to some of the aforementioned hot spots that had been quiet when I drove through earlier in the day.

While in Gardiner, I noted some visitors fresh out of the park. They were adorned in skinny jeans with low cut, faux-fur-lined boots that I’m pretty sure were sparkling. I looked down at my own legs. Giant snow stompers bound with gaiters, and poofy snow pants billowing out. I could be mistaken for a pirate. I’m honestly not sure who looked sillier, but I at least was ready to plunge into deep snow at a moment’s notice. I probably wouldn’t get far, since I’m constantly forgetting to throw snowshoes in the car, but I’d come out a little less messy than others, at least.

I drove back into the park, but was soon pulling over in Gardiner Canyon. I spied a smallish bird perched high above the road. It didn’t look like most of the common winter species I’ve been seeing. 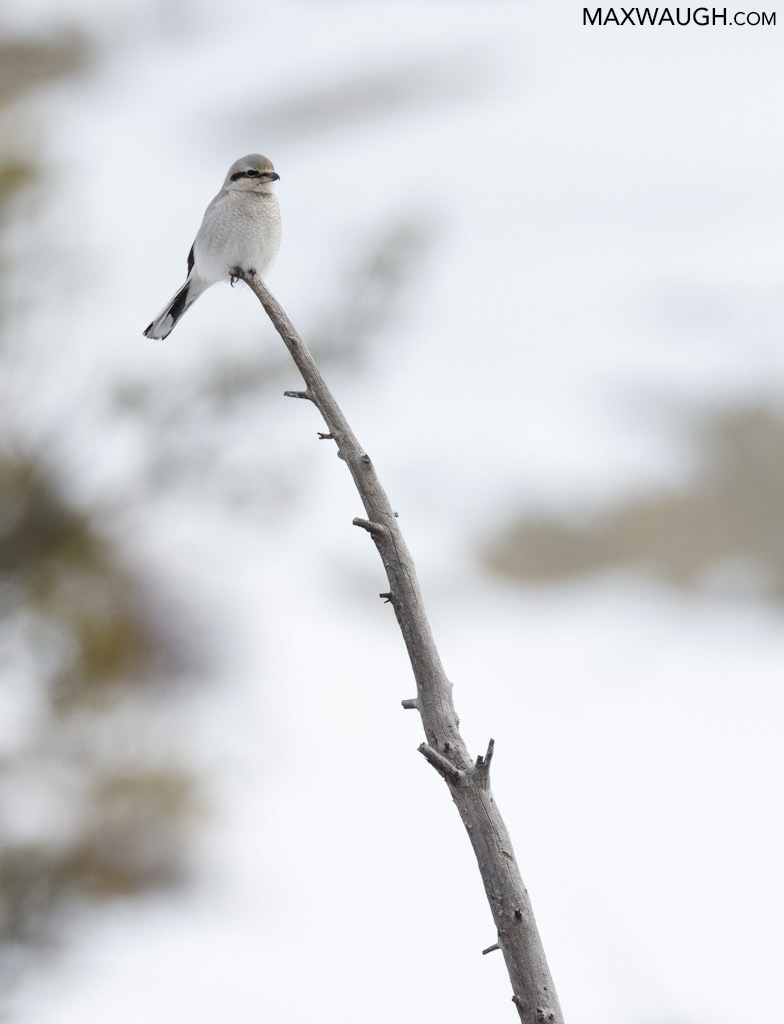 Indeed, it was a Northern Shrike, which I’ve only seen in the park on a couple of occasions.

I turned east at Mammoth, and at the High Bridge had to slow when a vehicle ahead of me stopped. I craned my neck to look down into the canyon… the river’s a common corridor for wildlife, sometimes wolves. Though I didn’t see anything, I met the vehicle in the next pullout. The occupants had indeed seen a canid of some sort, but our subsequent scans came up empty.

All morning I had been toying with the idea of going into the woods to look around a bit for a bobcat. Total long shot, but I had the sighting last month in an area where they’re traditionally active, and I thought it might be nice to get a little exercise. Plus, I needed to find a tree.

I stopped at the site of the January cat sighting, and peered down off the road. It was much snowier than last month and much steeper than I remembered. And I still didn’t have snowshoes. The idea was quickly scrapped.

Which meant I never found the tree I needed, and had to drive up to the next restroom. Fortunately it wasn’t too far away.

I came back outside and shuffled over to the car. Looking across the road, I spied the silhouette of either the biggest Yellowstone pinecone I’ve ever seen…

It wasn’t far off the road, and I had time to grab my gear and set up. Poor light and difficult angles didn’t result in great shots, and it eventually fluttered across the road, perching on a tree uphill from me.

At a moment’s notice, I plunged into deep snow. I still had no snowshoes and it was

going. My first real exercise of the trip, and as often seems the case, I chose a substantial challenge to kick things off.

You know, it’s been a while since my thighs have felt the cold but friendly embrace of packed snow. This stuff was deep. But hey, I landed a couple more shots. 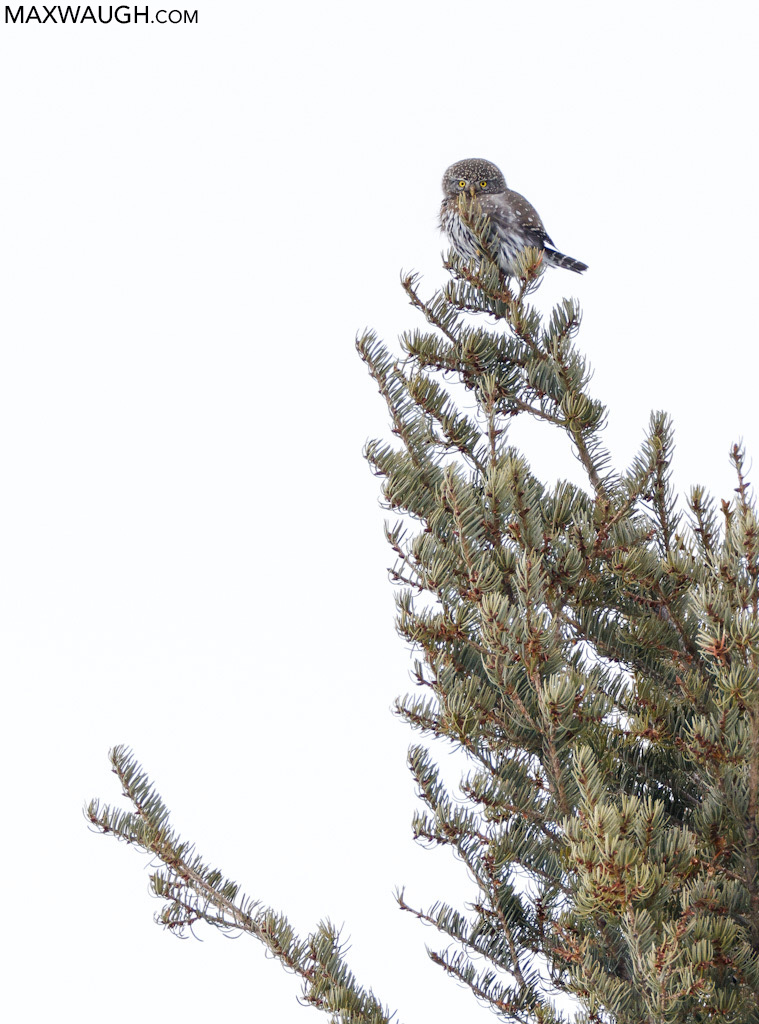 I eventually waded back to the car, doused my scorched lungs with a little water, and drove on. As I began to approach the older carcass site, I noticed that some of the more distant pullouts were fuller than they had been over the past 36 hours. Hmm… something was happening.

I lucked into a slightly closer parking spot just as a passerby confirmed that wolves had finally appeared. And indeed, the crowd was thrice the size it was yesterday. Thrice-plus-one once I found my spot.

Two wolves had appeared. They were resting on a hillside above the carcass, and had been for some time. Finally, after an hour or so, we got a nice little show. 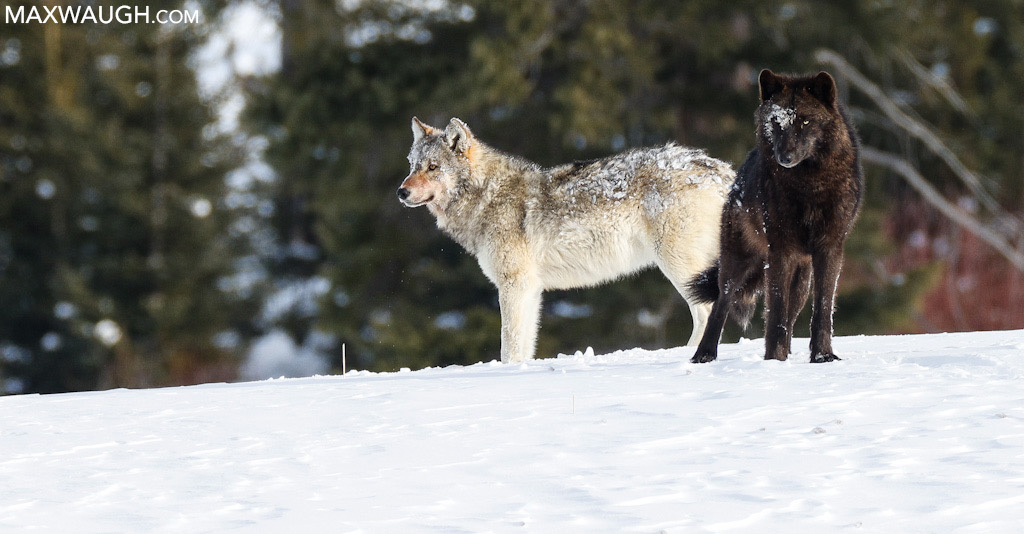 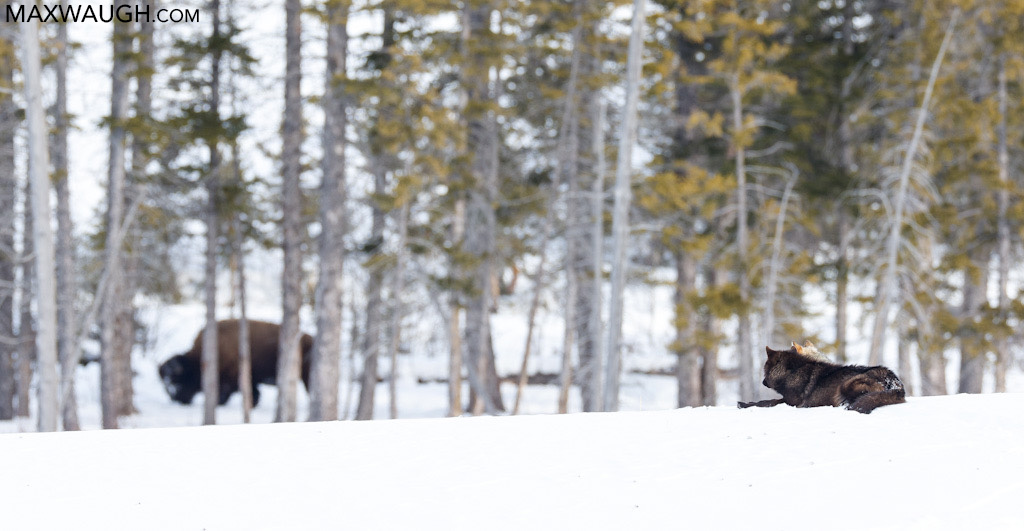 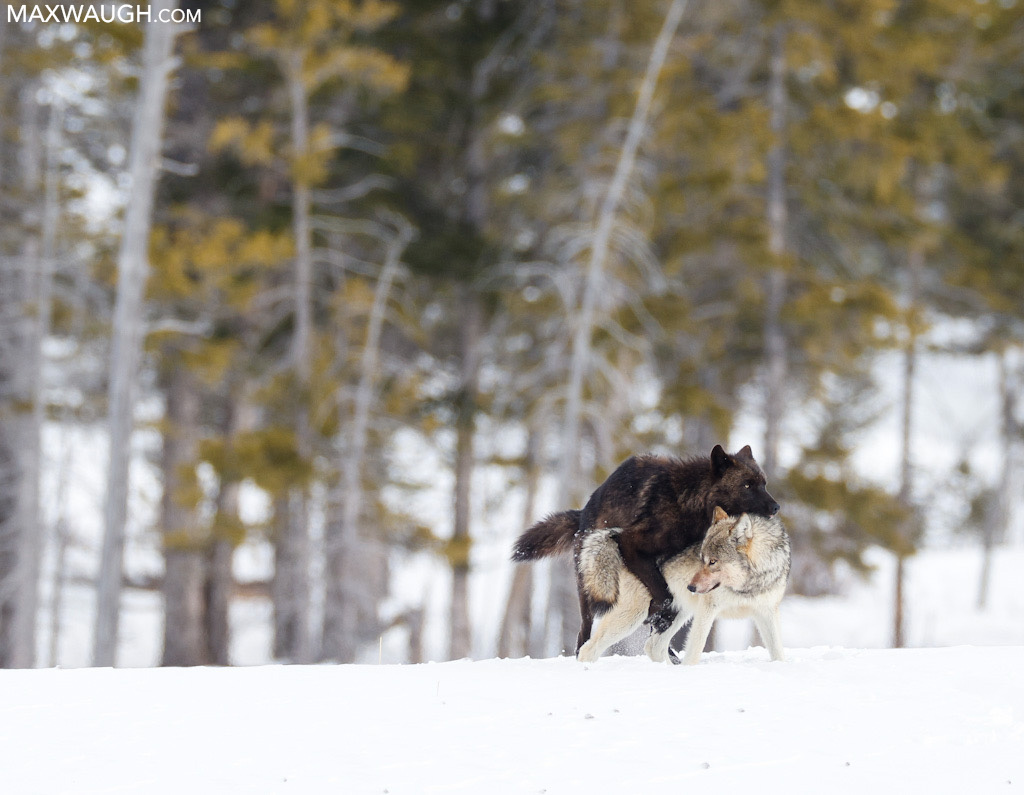 According to those in the know, both were young wolves, so we were witnessing puppy love, I suppose. Rock and roll continues to corrupt America’s youth.

That was a fine way to wrap up my solo time here this winter. On Sunday I pick up clients and we head south for the interior. Hopefully the wolves will save some activity for our mid-week return!