Client pick-up day! I slept in (much-needed, despite the temptation to explore for a couple hours in the morning), and then made the drive from Silver Gate up to Bozeman, and eventually down to West Yellowstone. The tour was scheduled to start in the interior on Monday.

So, nothing to report. Instead, please enjoy some photography from a few of the fine artists with whom I’ve crossed paths in recent days:

It was good to be back in the interior, where things seemed to be a bit quieter on the tourist front compared to a month ago. That didn’t help us find the bobcat, of course. I continue to whiff on that front.

We did pause to photograph some of the bison herds along the Madison River. Had to warm up the trigger finger somehow…

As always, decisions have to be made on which way to go. In a snow coach, once you’re committed, there’s little wiggle room for backtracking, so you have to stick to the plan. We opted for Canyon and Hayden Valley.

The drive was quiet, and we did our best to stay awake through that Norris-Canyon stretch. Just envision you’re zoning out with us as we are hypnotized by the homogenous stands of young pine trees.

While we were all daydreaming, I started trying to figure out why so many people are surprised by my age when they meet me in the park. This has been happening for years. Do I come across as, er… seasoned? Grizzled? Um… trying to think of synonyms for being advanced in age that won’t insult my elders.

Whatever image I’m projecting here, it’s throwing a lot of people off. Maybe I need something like a TikTok account (which feels way younger than appropriate for me) in order to average things out. Or at least stop making Abe Vigoda references. If I sound old, but project young, then I will come across as a more accurate “softening middle-aged” character, right?

I am grizzled though.

We made it through. Snooped around for pine marten in places they’d been seen recently, but didn’t have much luck. A couple days after reacquainting myself with thigh-deep snow, I discovered hip-deep snow. There is a huge difference. At least I can move when it’s only thigh deep. I had to clamber up and shuffle around on my knees… the bottom half of my legs essentially acting as snow shoes, keeping me up on the surface.

My snowtop waddle did not help me track down any martens.

In Hayden Valley we finally found something smaller than a bison: two distant coyotes out near the Yellowstone River. 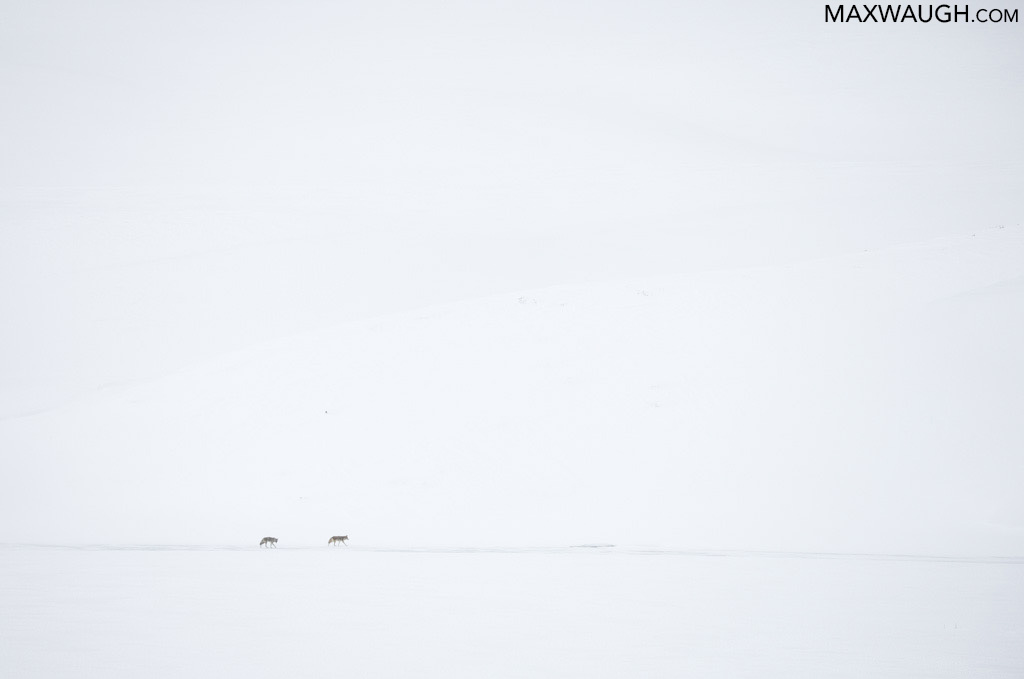 South of the valley, action finally started to pick up.

On the way down, we paused for the Bald Eagle that still hangs out near Mud Volcano. Another coyote walked along the river far below. Farther south, Adam (coach driver and fellow guide) spied an otter we had heard about. When we pulled the coach up, it slipped back into the water. It surfaced briefly a couple minutes later, but that was it. No photos.

LeHardy Rapids was our stopping point, so we turned back northward. We staked out the otter spot a bit longer while having lunch, then plowed up toward Hayden again.

Before we got there, we were distracted. The first Bald Eagle was joined by a second on the same branch. Unfortunately, there were no open, clear views… branches everywhere! Note the size difference here… the female of the species is larger. 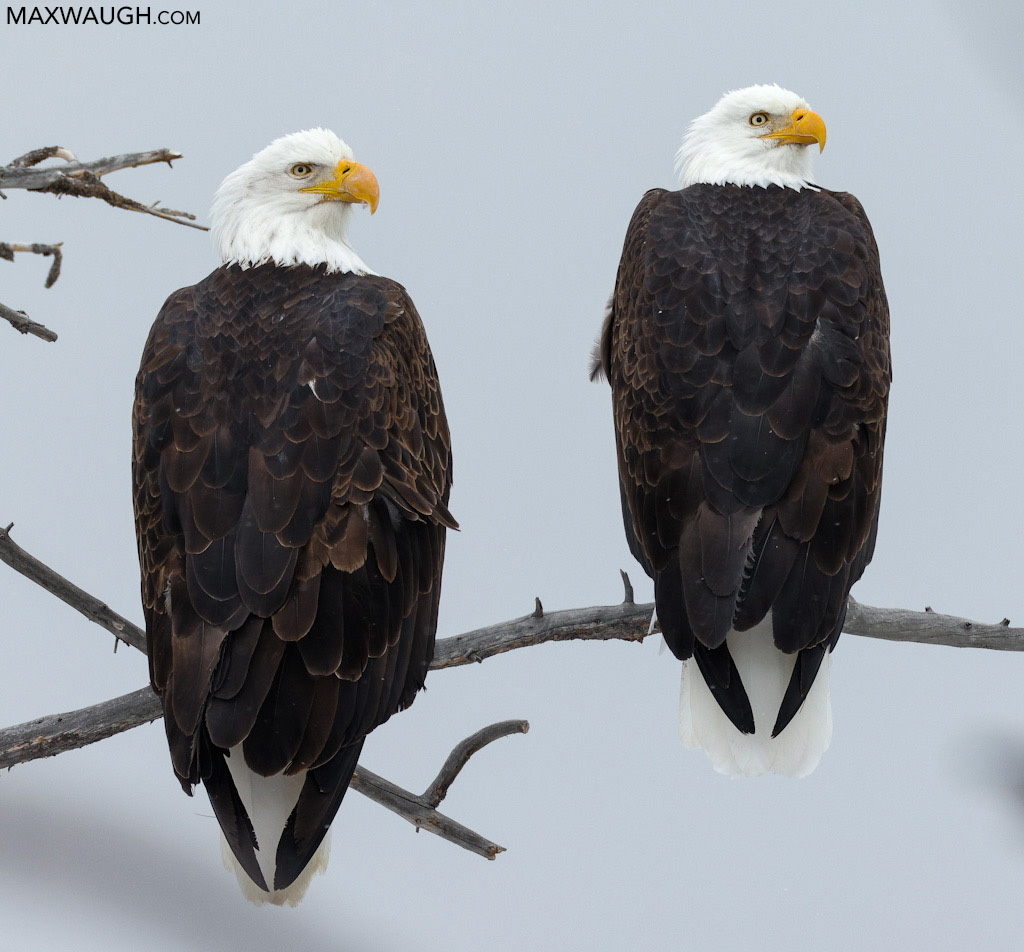 While there, a lone bull bison tromped above the river. Then Canada and Steller’s Jays alighted briefly on nearby trees. Lots of distractions! 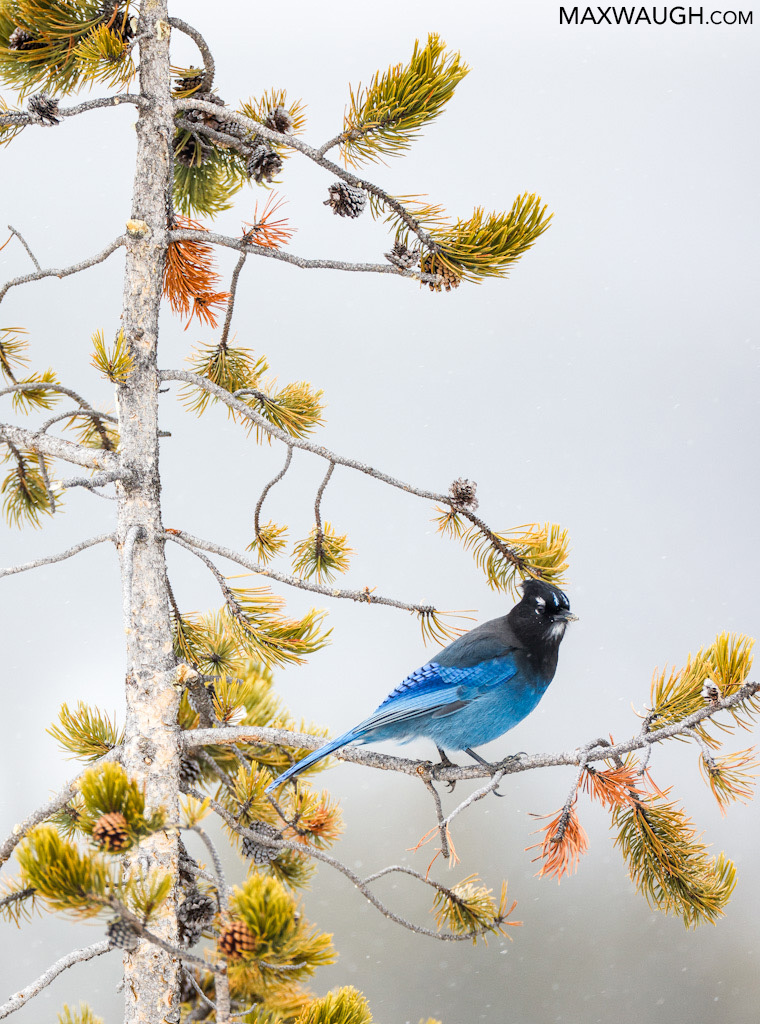 Hayden was windswept, but sadly we couldn’t find any wildlife to photograph in the gusty mess. We stopped for one or two landscape shoots. Things calmed down by the time we reached the north end of the valley, and we paused for a Trumpeter Swan, as well as one of the (uncommon here) Hooded Mergansers that has been hanging out on the Yellowstone this winter.

Still no martens, so it was time to return to the west side. I’ll spare you the daydreaming sequence on the return leg.

Turning south at Norris, we soon found ourselves confronted by a classic Yellowstone winter scene: Big Ol’ Bison in the Road! 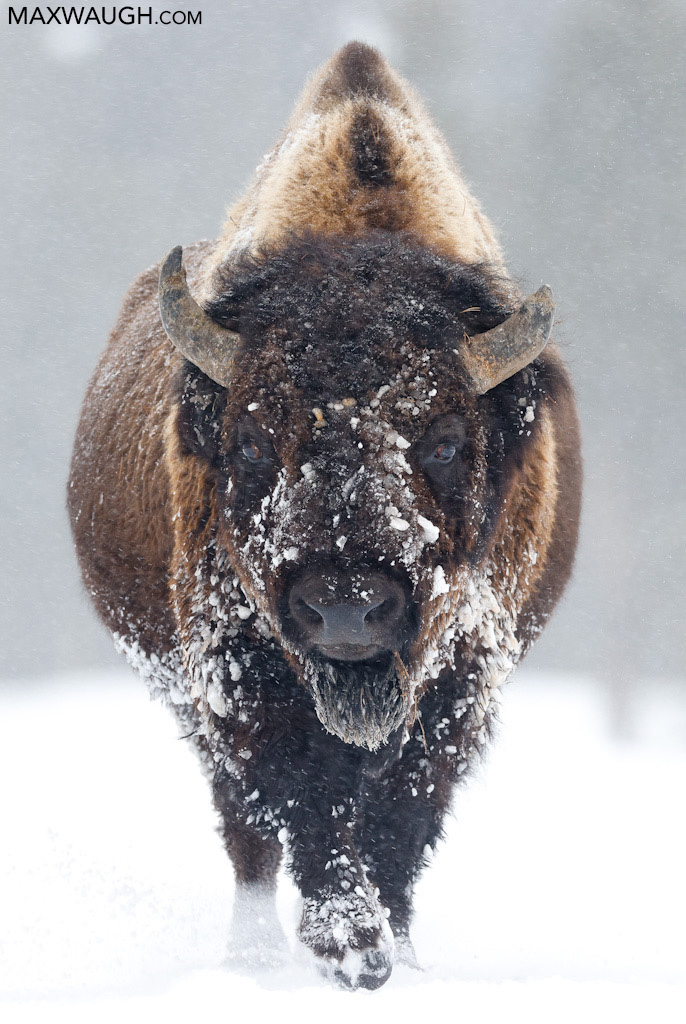 Cool. Best thing all day behind the camera.

Back on the Madison, we spied two elusive animals, but neither paused for photos. We began to notice fresh ermine tracks along the road when I spotted the darned thing running back in the other direction. We popped out of the coach and tried to keep up, but it must’ve been heading for home. This wasn’t a zig-zagging hunt, just an all-out, single-minded sprint. It disappeared into the trees.

Then Adam spotted a Northern Shrike (yes, another one!) flitting about at the top of a roadside tree. It quickly went on its way.

We did have one more stop that yielded some images. A coyote was hunting on a snowy island in the river, then swam to the far bank and proceeded to explore the shoreline. Eventually it paused right across from us for a long scratching and preening session before heading west. 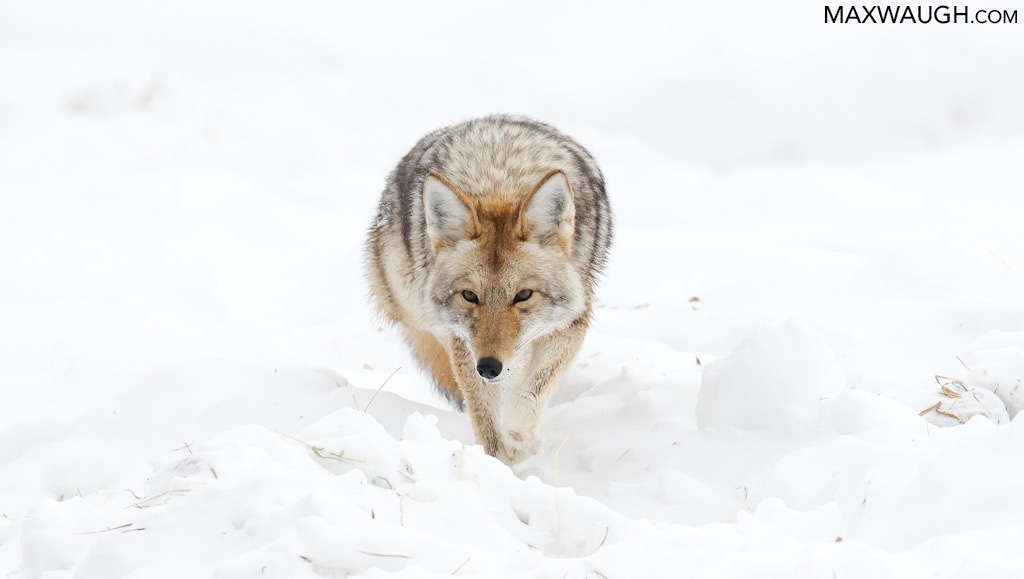 Sadly, it completely ignored the Ring-necked Ducks (another uncommon bird here) in the river just below, so we couldn’t end the day with an epic dive into the Madison.

The weather helped us in some ways today, but it mostly did its best to hinder us. In the end, everything worked out okay, despite Mother Nature’s best efforts.

There was a fresh coat of snow along the Madison, making it much easier to find fresh tracks in the morning. In theory. We made two passes along the river before we actually saw any fresh markings (snowshoe hare). The search didn’t yield any notable wildlife finds.

We wanted to switch things up this morning, so we started to head south toward the geyser basins. But we did squeeze in some wildlife first… a brief dipper shoot along the Firehole River. 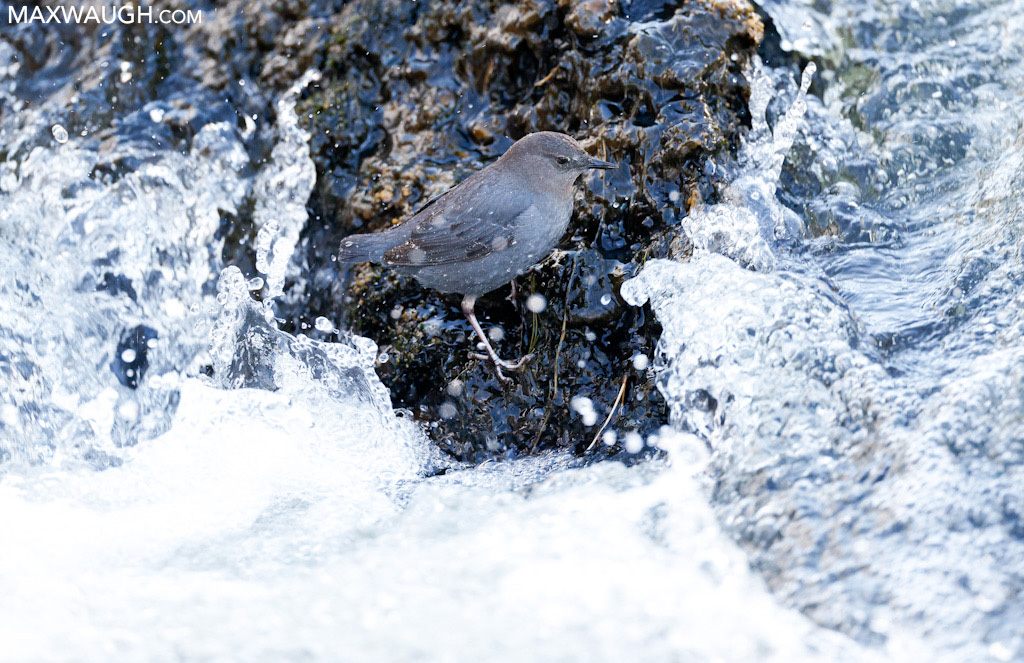 We hoped to continue south, perhaps to photograph some moody scenery. Our plans were foiled by snow drifts on the road ahead. Coaches were getting stuck, so we gave up and turned back (on a warmer morning in the 20s, moody scenery may not have been possible anyway).

The backup option was pretty good: Norris Geyser Basin. On our way, we passed right under a Bald Eagle and its raven friends. We snapped some quick shots out the window. 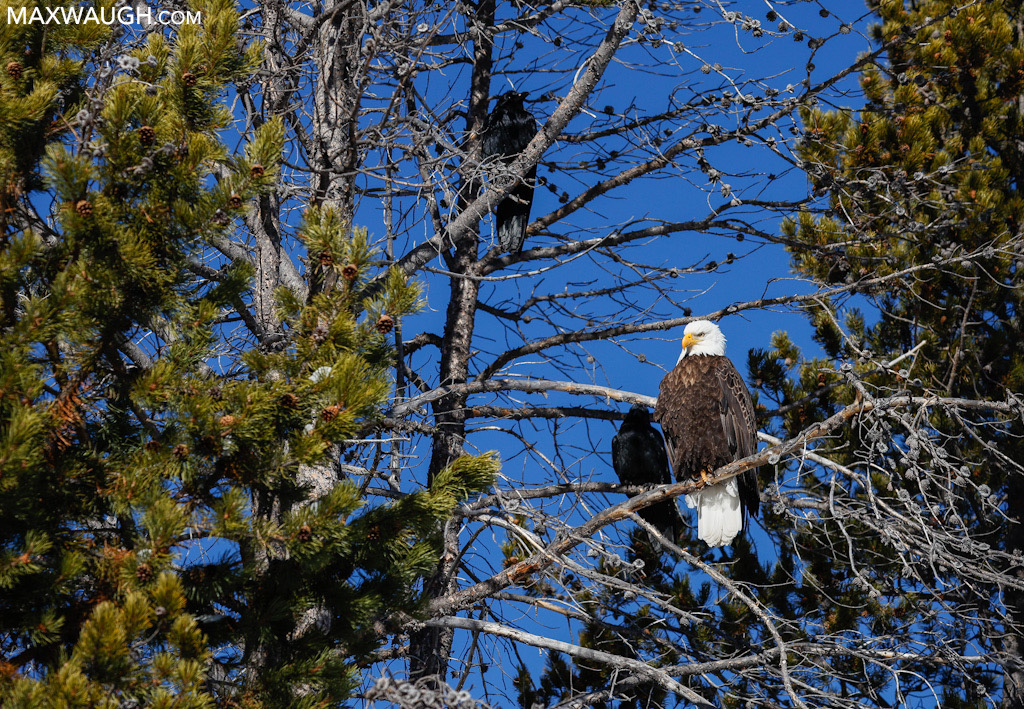 We arrived at Norris in decent time. A raven greeted us in the parking lot. The geyser basin itself was looking as alien as ever, though not quite as photogenic as usual for a winter day. The warmer temps prevented ghost trees from appearing. To add to the (minor) disappointment, a massive cloud parked itself over the basin while we were there, so the brighter colors in the algae-filled runoff didn’t shine nearly as brightly as we’d hoped. Still, the place is sufficiently eerie and dramatic to make it a worthwhile visit.

In the parking lot, crossbills and chickadees flitted in the trees as we departed. We drove east. It wasn’t even midday, so why not check if Hayden Valley was navigable? But first, it was nearly lunch time. The perfect time for a marten stakeout!

We parked the coach, noting fresh tracks (snow accumulation and a bit of wind really helps reset the landscape and provide new clues!). I ate outside, wandering around a bit to follow mustelid footprints and see if I could spot who made them. There were loads of tracks from the morning, criss-crossing the road all over the place.

I returned to the coach and stood outside while munching on a delicious Cosmic Crisp apple. A second coach had pulled in behind us with the same idea of a lunchtime stakeout.

My clients had never seen a pine marten (yes, it’s technically the American marten—pine marten being reserved for the European species—but I’ll stick with our local lingo… just as I’ll occasionally call a long-tailed weasel an “ermine” in winter). They asked to see a photo of one. The problem was that I couldn’t get a cell signal, even situated so close to the local tower! So I stood there for a bit, staring at my phone, waiting to see if I could load a marten photo on any one of three different social media platforms.

And then the folks in the coach behind us started tapping on their window, waving at me, and pointing. I turned. A marten stood in the snow. I suppose the next best thing to sharing my past photos of a marten is allowing my clients to get their own!

It started out normally enough. Lots of excitement, etc. Our subject was climbing up, down and around some dense conifers. Views were occasionally fleeting, but it would come out into the open on branches, or sometimes on the ground. 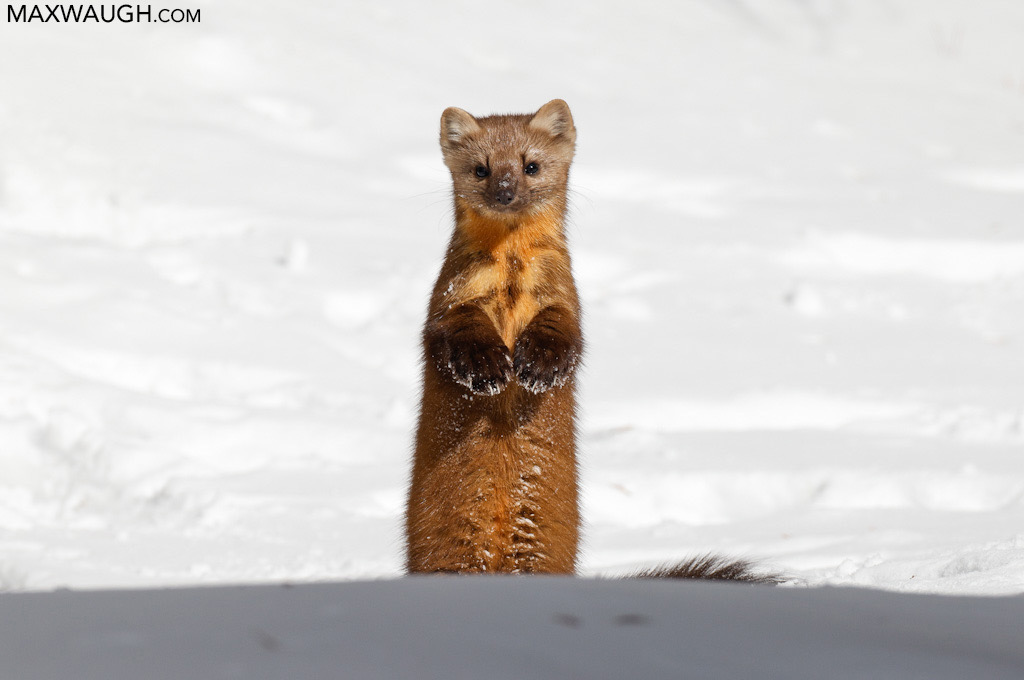 The sun was out and life was good. Then it got better. The marten disappeared in one direction, then suddenly reappeared from another, as if by magic. Wait a second… 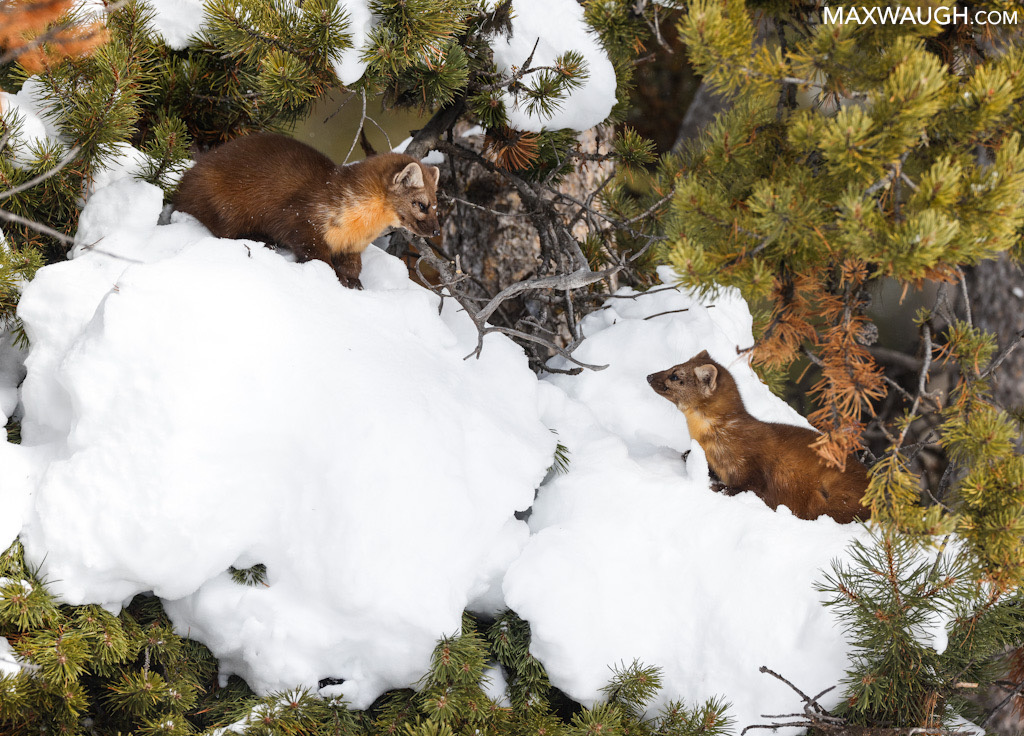 Boom! A courting pair, perhaps? This explained the sheer number of tracks I found out on the road.

We had a good hour with them as they scampered all over the place, occasionally coming together (the shot above was probably the best view of the pair). Sometimes they’d run off over a hill, then returned before vanishing again.

The encounter was spoiled a bit toward the end, when the smaller of the two squeezed its way into a nearby dumpster. Ugh. I felt fortunate we were able to capture them in a more “natural state” before it began to look for scraps. My enthusiasm waned a bit, but the first part of the encounter was pretty special!

With the fun over, I was able to return to my half-eaten apple. Almost no oxidation after sitting around for an hour… one of the advantages of the Cosmic Crisp!

We tried to go south into Hayden Valley, but the conditions that plagued the western routes (and the northern road, which was closed much of the day!) were present in the valley too. We turned around before reaching any treacherous terrain.

The return leg was uneventful. Fresh ermine tracks dotted the hills along the road along the Gibbon River. Back on the Madison, we saw that yesterday’s weasel had been back out, but we didn’t catch sight of it this time. A few final passes didn’t turn up a cat, so we’ll have to hope our final day in the interior is a lucky one. But today was pretty lucky too, wasn’t it?